I have had the honor to receive your letter inviting me to preside at the Democratic Mass meeting to be held at Albany on the second day of October.

For this mark of respect on the part of the Committee of arrangements, and for the very obliging terms in which you have been pleased to communicate it, I return my respectful & very grateful acknowledgements. Having felt myself constrained by considerations due to the people who had elevated me to the highest office in their gift, & to the institutions of their choice, to decline a similar honor tendered to by the Democracy of Newyork, & also of my own County, I hope to be indulged in the observance of a similar course, on the present occasion, by the my Democratic friends at Albany.

To you I need not say how cordially I approve of your views, or how ardent is my admiration of the noble efforts which my political friends are making to secure the complete ascendancy of Democratic principles in the Councils of the nation. The proceedings of the national Convention have afforded an admirable opportunity for the uncompromising Democracy of the Empire State to exhibit their real character before the world, & most promptly & honorably have they embraced it. All that is wanted to secure to them ^the gratification^ of having done the greatest good to the Democratic Cause under the most difficult circumstances, is, a steady perseverance in the course they have purs hitherto pursued. That this will be done I have not the slightest doubt.

You do me only justice when you assume that I participate most fully in the confidence, enthusiasm & pride with which you point to the names inscribed upon our banner by the Syracuse Convention.

With Judge Gard^e^ner my acquaintance has been but Slight, but from the little I have seen of him, & more that I have heard, & from the unusual satisfaction with which his nomination has been recd. by the very intelligent & patriotic Democracy of his vicinity, I am well assured that he is eminently worthy of our confidence respect & support. It has not, I imagine fallen to the lot of any one to have possessed better opportunities to judge of the character & qualifications of Mr Wright than it has been my good fortune to enjoy. If there is in the whole Country a single man who possesses a purer heart, a clearer head, or a sounder judgment, than he ^Mr W^ does, he is unknown to me. In the many difficult & trying positions in which I have known him to be placed, and they have been among the most responsible & important which the civil service of the Country has for a long series of years presented, there has not been one occasion on which it was not perfectly plain that the question, "how will my action in this matter affect the future prospects of Silas Wright, was never, for an instant brought into view. This is rare praise & it is as true as it is rare. It is this never failing exemption from selfish feelings, this noble disinterestedness, by which his whole career has been pre-eminently distinguished, the reverse of which has been the besetting infirmity of public men in all ages & Countries which has enabled him to distinguish himself so greatly in every public station which he has occupied. That his election may be as triumphant as you anticipate as ^is^ my fervent hope & sincere belief. I hope so, not so much on his own account as for the good of our great common wealth, which must always be an object of Solicitude to every good Citizen, whether he be a Whig or a Democrat. Nothing is to my mind more certain, than that he ^Mr Wright^ will if elected, conduct the affairs of the State in a manner which will not only be long remembered with respect & gratitude, but which will not fail to reconcile to their disappointment, thousands who are now, from the best of motives opposed to his election.

I am, gentleman ^my dear Sir^ with 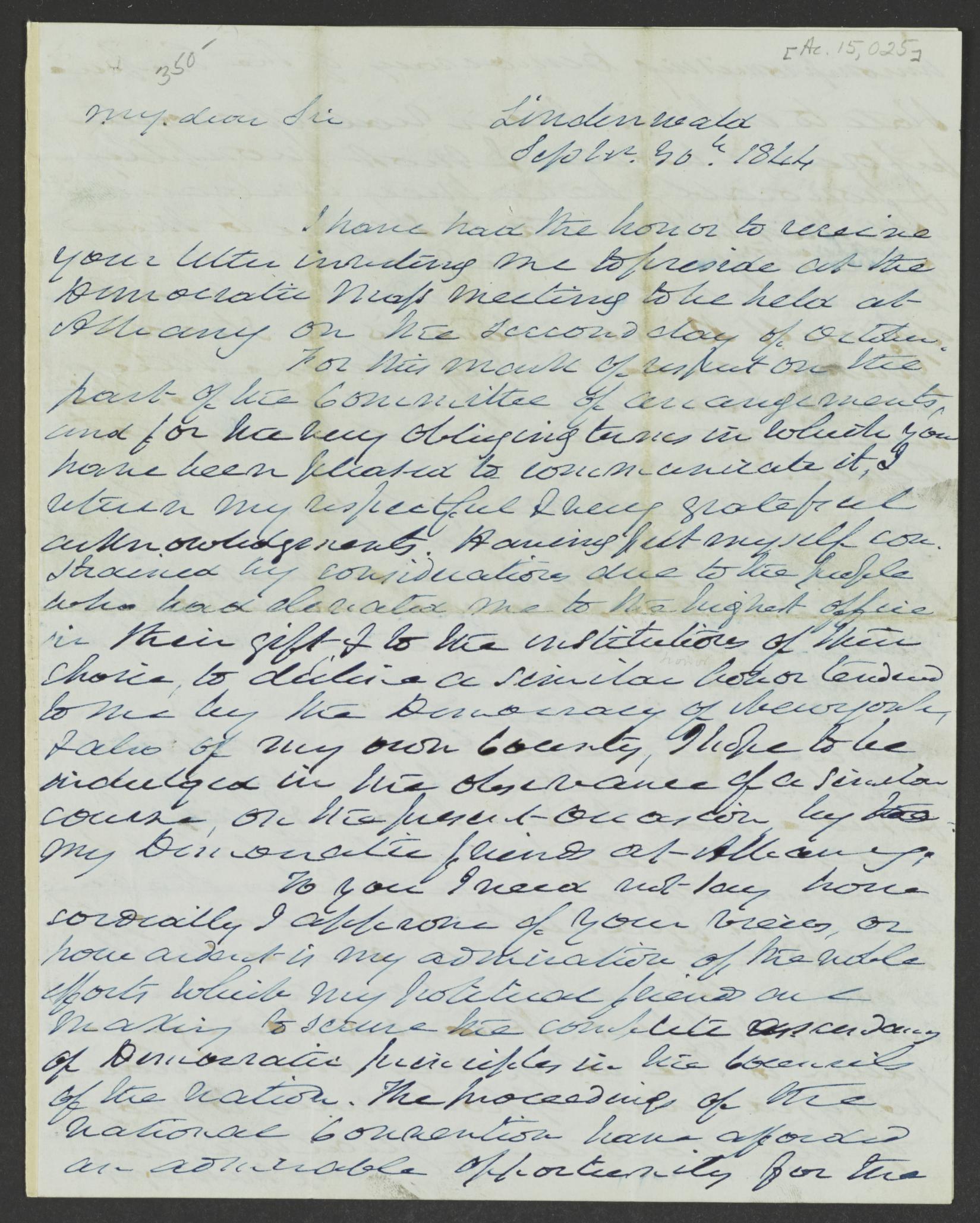 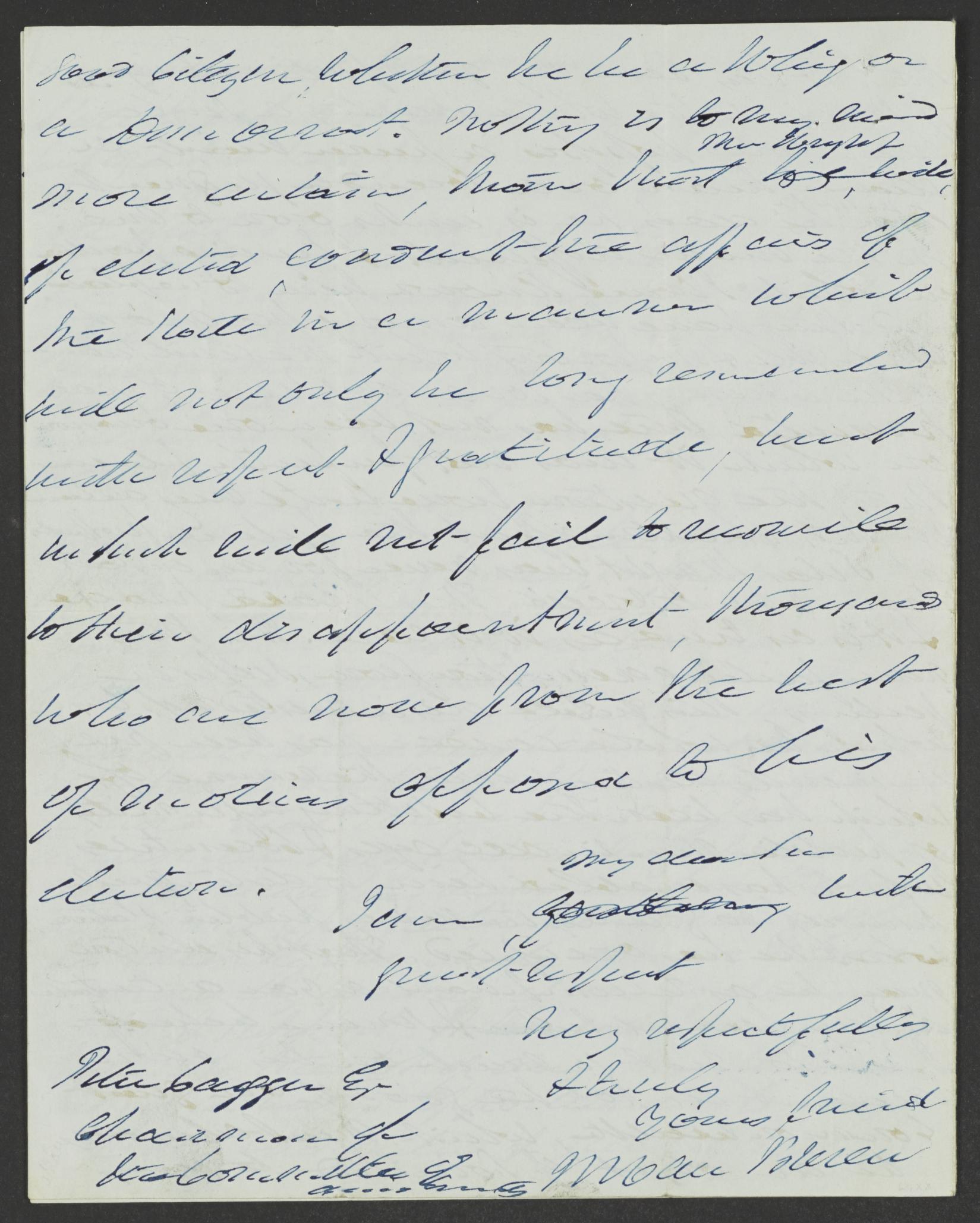 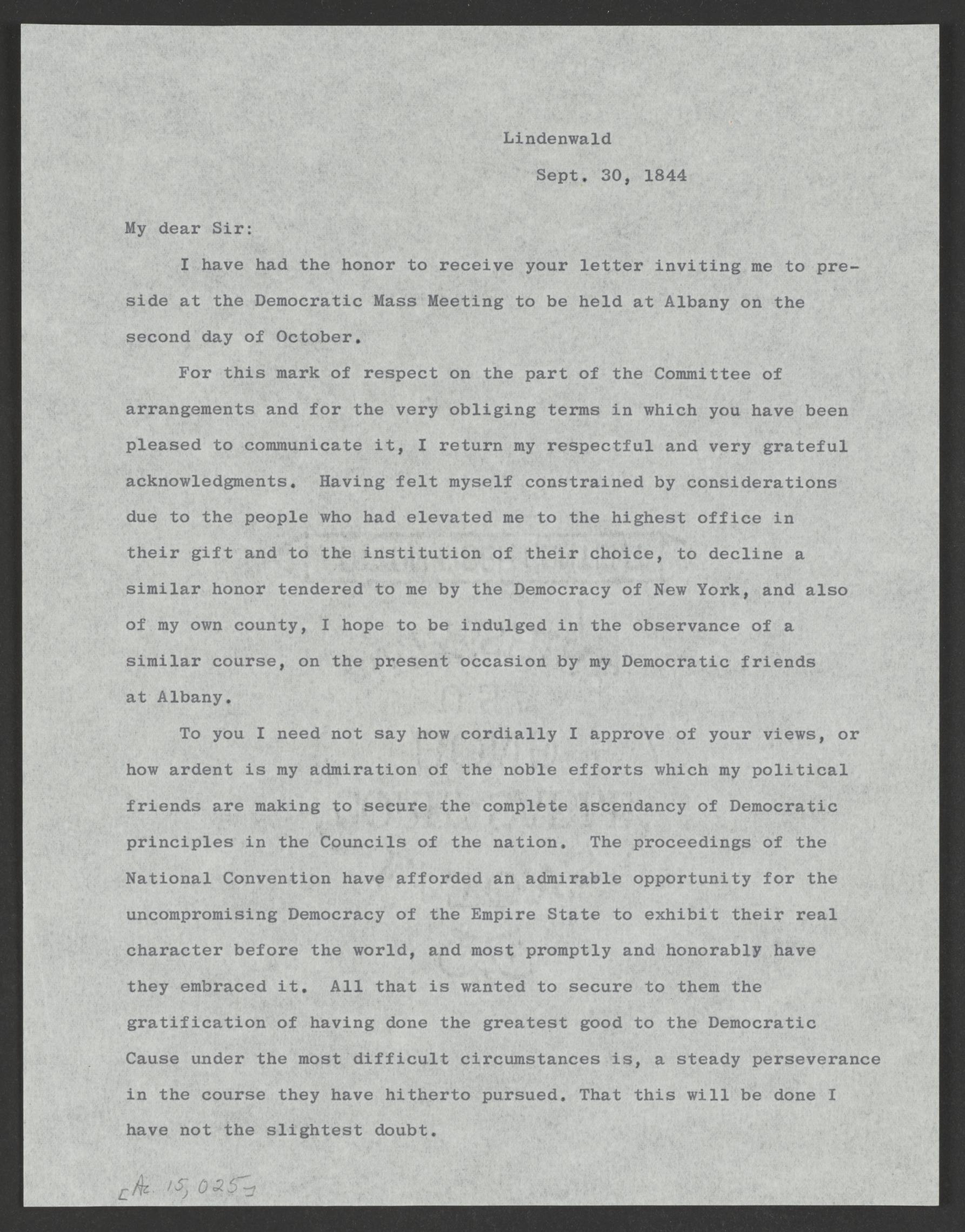 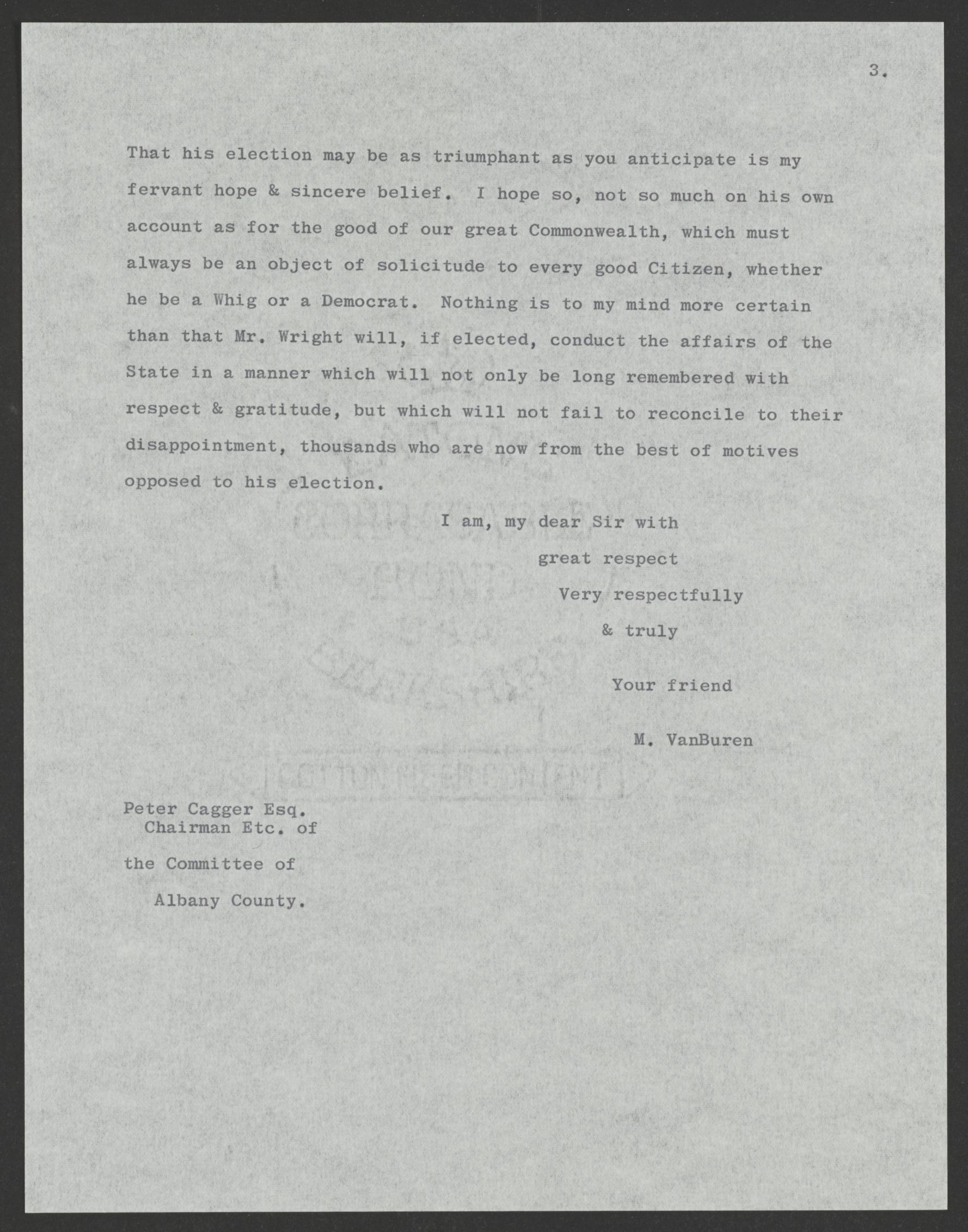