I have refrained from writing you a single Letter, during the present campaign—and I deeply regret, that I should the first one, which I should have to write, would be one, which gives me as much pain to write, as any which ever came from my pen. I need not tell you, Mr. Van Buren, the feelings which I entertain towards you. Trusted at all times with a kindness, a liberality, a distinction far beyond my merits, I have conceived a sentiment towards you, which partakes not more of confidence in you as a politician, than of attachment to you as a man. I have received from you a hundred evidences of good feeling, which have left a reciprocal impression upon my heart. But I will not dwell upon particulars, nor will I deal in any professions. You must know me well enough to believe them unnecessary.

The last 10 days have produced a condition of political affairs, which I did not believe to be possible. I am compelled to come to the conclusion, that we cannot carry Virginia for you. We have lost, I now believe, the joint vote in the Legislature. We have ten majority in the Senate, it's true—but in the H. of Delegates, where we had a majority of 16 at the last Session, the Whigs have now a majority of about 12. But I do not attach so much importance to this Revolution, as some of my friends. I have recovered from the temporary panic, which is so natural with such circumstances. I assure you, I do not write you under the influence of any feeling, which might cloud the judgment. But I write you under the effect of what I have heard from my friends, and what they write me about our Prospects in November next. Judge for yourself, Sir. If I did not know that you are a man of honor, I would not put the enclosed Letters in your hands. Read them, my dear Sir—but don't preserve their names—take no Copies of them—but return me the originals. I will have no half-impudence with you. Some of them are my best friends. They are all your warm friends. I trust them in your hands—for, I know, you will not abuse the confidence I am now reposing in you. Read them; and judge for yourself. I am most anxious to spare your feelings, if I can—but I owe to you, as my friend, as the friend of our great Principles—to let you see what others have trusted to me—that you may determine for yourself.

Whom we can get to supply your place, I know not—if you retire. You will see what my correspondents say on that point. I can only tell you, that Mr V. Calhoun's friends solemnly disclaim any wish to run him. That I have solemnly protested, and will protest against any such idea—and that I am actuated by no other motive, under Heaven, than a desire to possess you of the Views which these Letters express. It is the same opinion, which is entertained by gentlemen, as staunch republicans as are to any in the state, who are around me. Who have been true, and are your personal & political Friends.

I have made a very few <illegible>, to some of the Letters, to explain the localities & characters of the writers. Those, which are marked "A," came to me this morning.

It would be most desirable to stop, as soon as possible, the jarrings which are going on at Washington. If they go on a few days longer, they will break up our Party, and ensure beyond the possibility of a doubt the triumphant election of the most profligate politician perhaps in our country. Is it not surprising, as well as distressing to see, our wealthy & distinguished friends at Washington wrangling with each other, at a time like this, when we have been beaten in Virginia—and when the insulting spectacle of so many thousands at Baltimore has just passed before us. They met together to band together, with bonds of iron, this strong party in favor of this strong and reckless man—and there are our friends at Washington wrangling with each other, and weakening our strength and depressing our hopes, at a time like this? God forbid! My dear sir—that I should pretend to dictate to your superior judgment—or even to advise you.

I can truly say, that I had set my Heart for nothing more sincerely, than to see you re-elected—and through you, our wronged party too righted. And that if you should become the nominee of our Party, I will do battle all I can for you, and against H. Clay.

I see some Scribbler has written from Washington to the N.Y. Herald—declaring my opinion that you must be dropped. It comes, I presume, from a very hasty letter written by my Son to Gen. Chapman, who asked about the state of our Elections. My friend Chapman, I suppose, spoke of the Letters, which I have saw—but which Runales idly made more of, than it expressed.

I ask, and desire no answer to this hasty Letter, from

Yours with great Respect 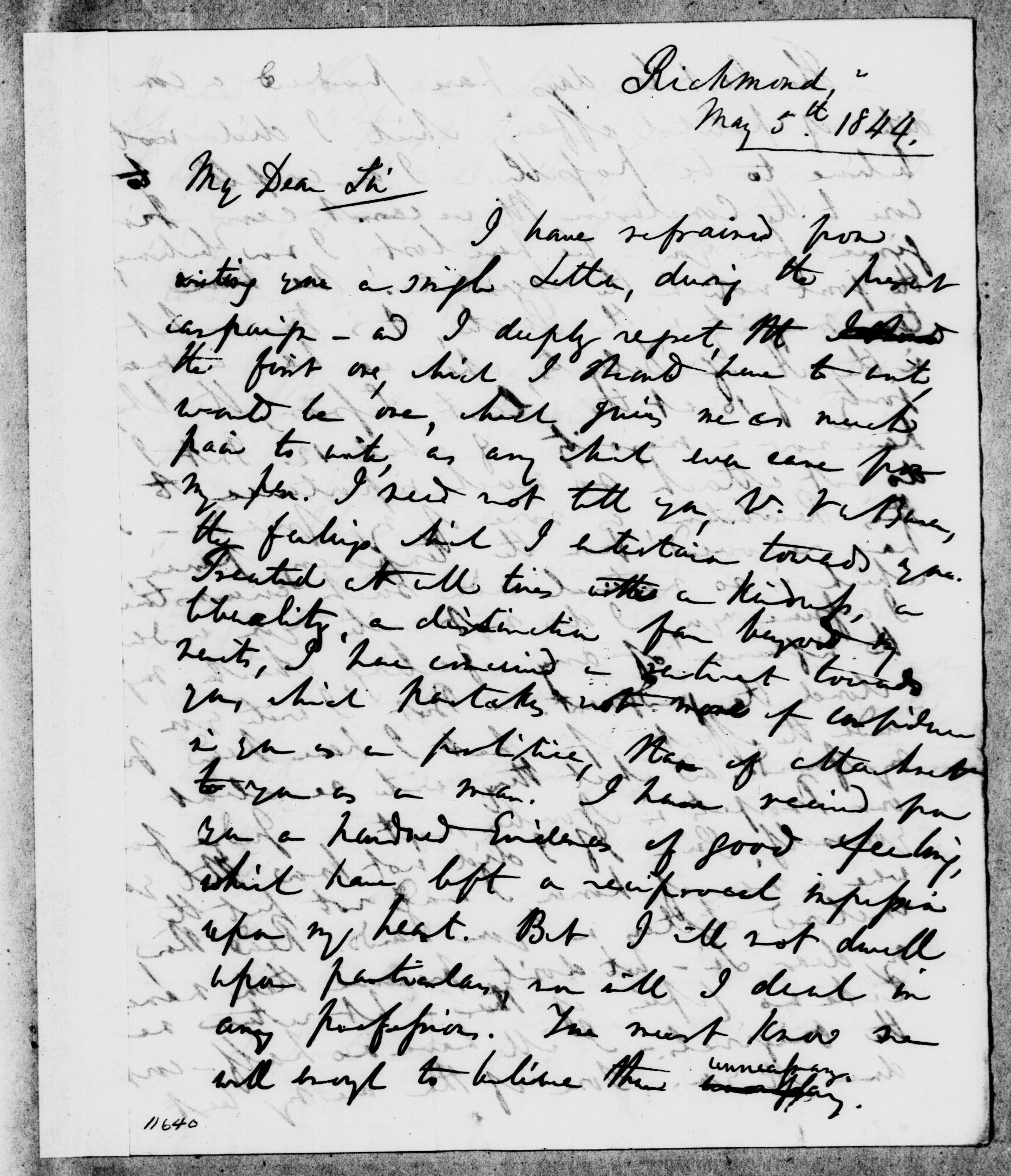 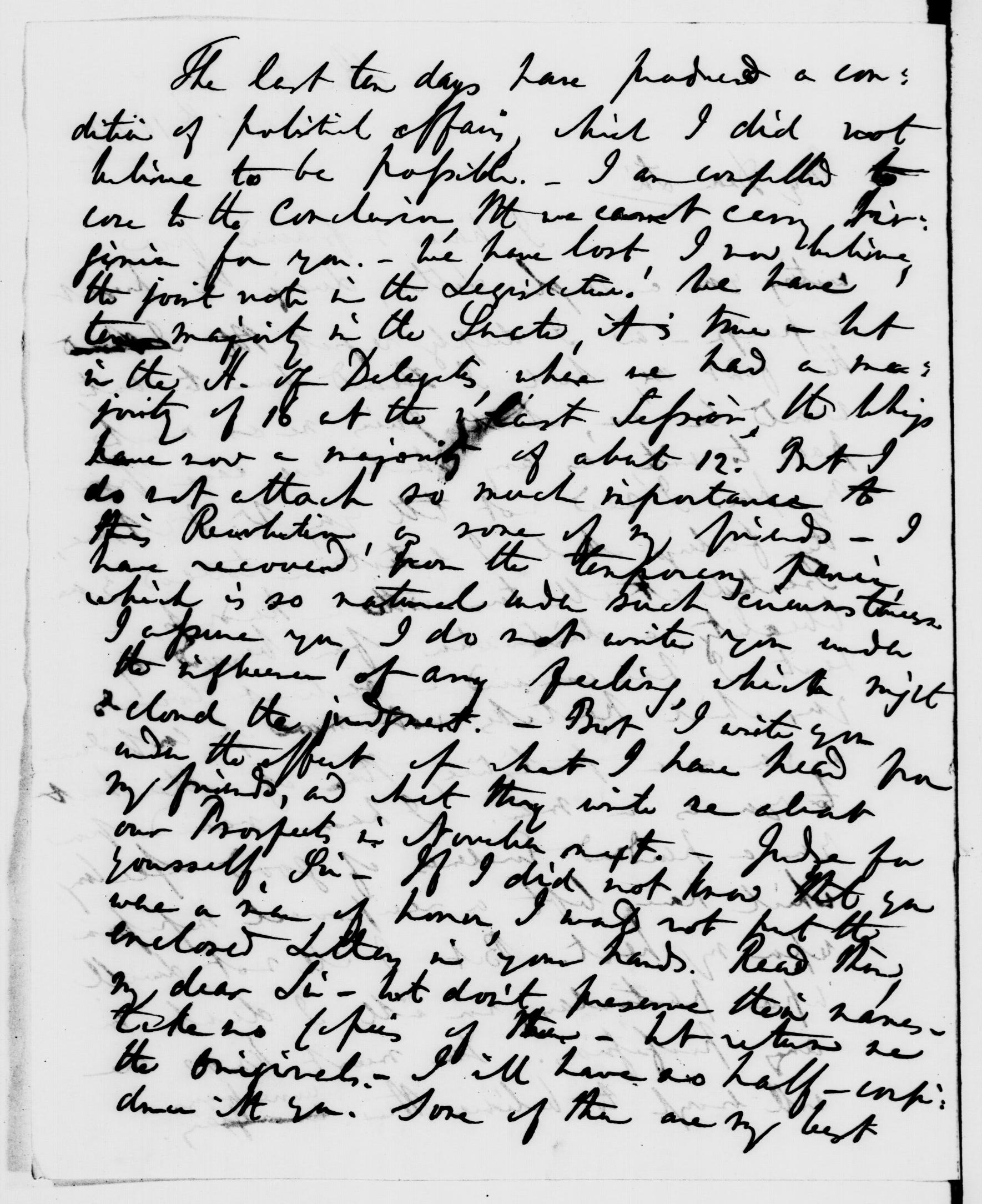 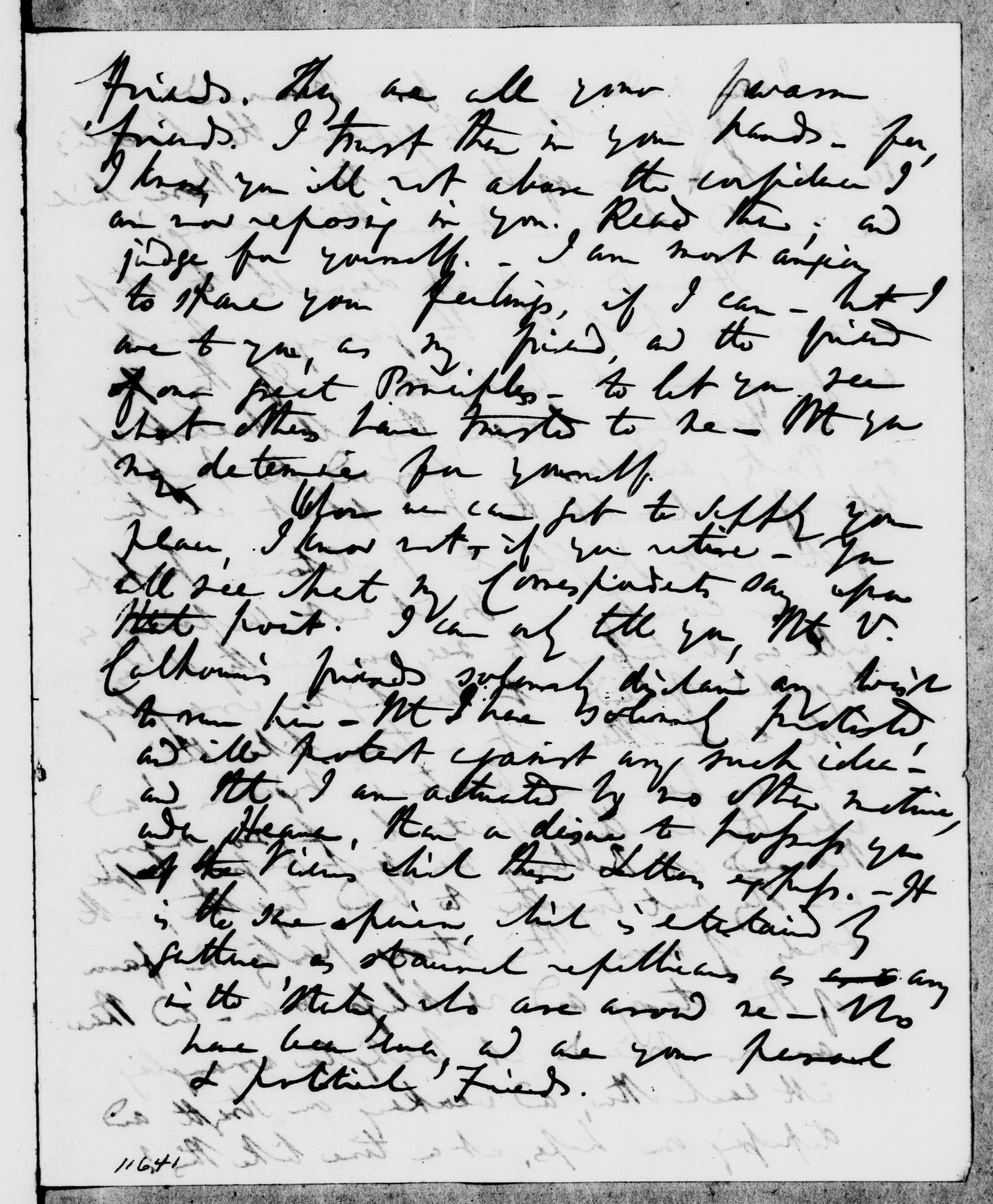 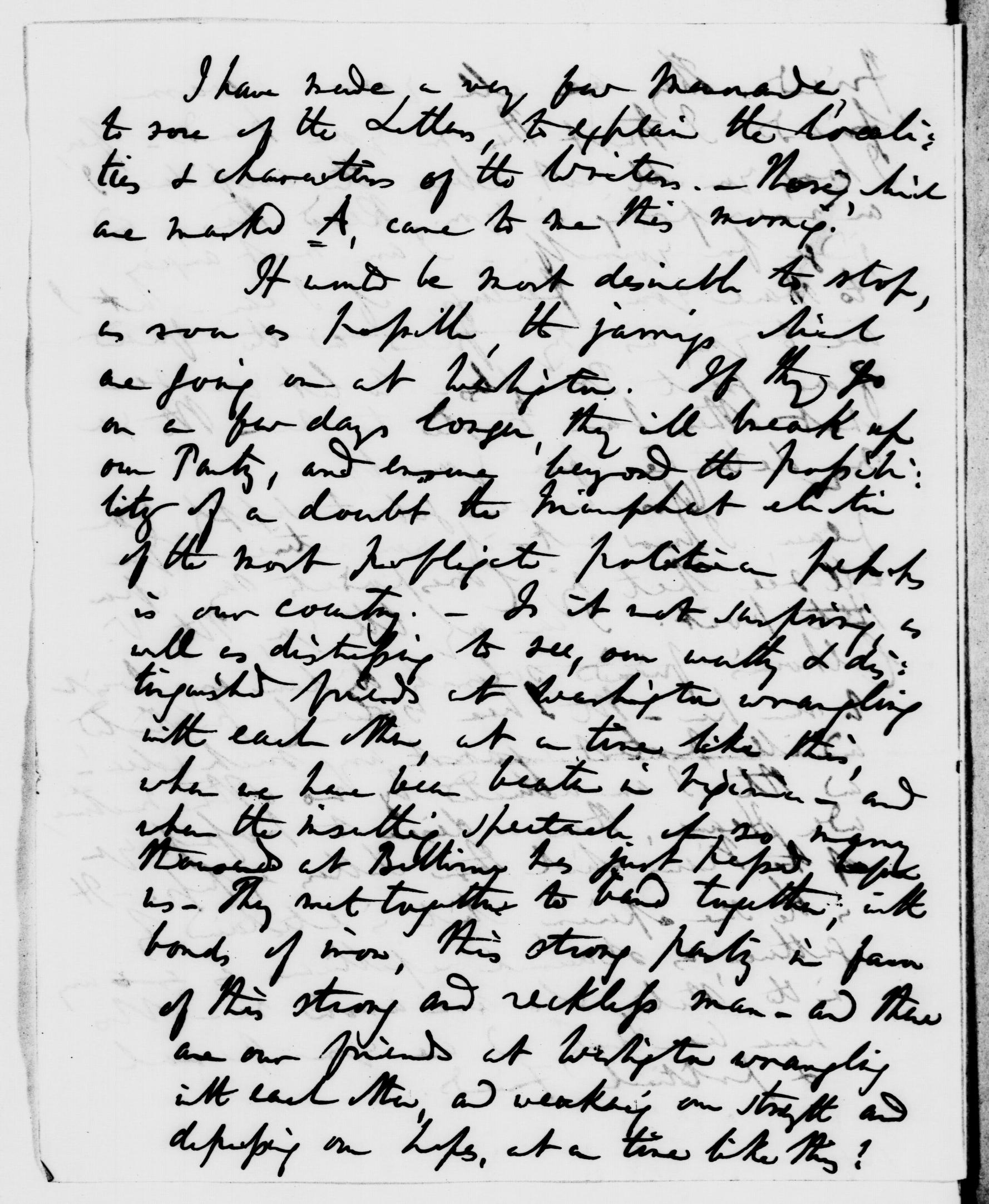 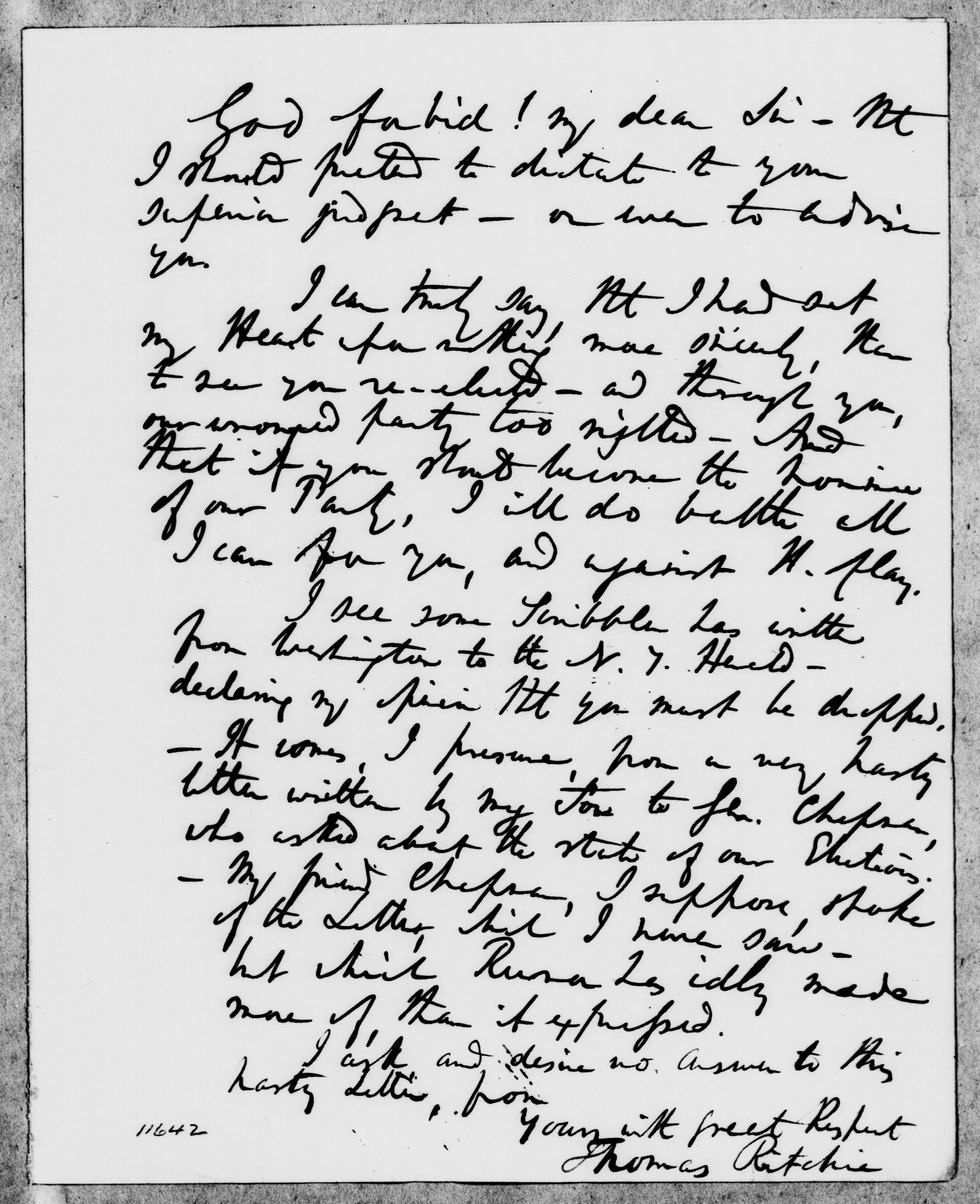 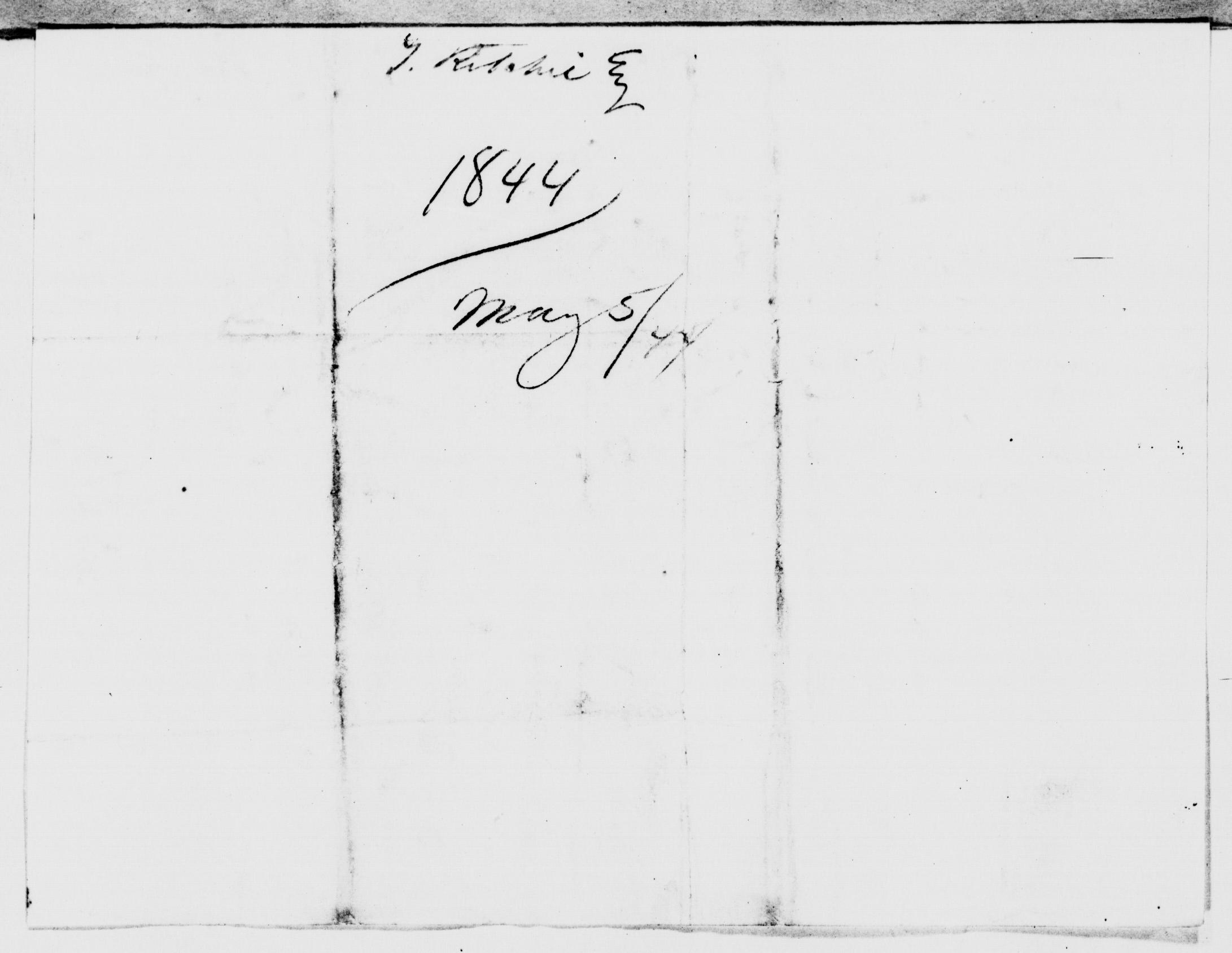