As it will relieve my feelings of disappointement and mortification which I find growing rather than subsiding as I go, to think out, having nobody to talk to, you must suffer me to <meander> an hour or two in the bustle and jam of the steamboat to inflict what may perhaps be a long letter on you: for I had made up my mind to write to you as soon as I got home, and I may as well therefore do it at once. My objects are, 1. to be explicit in making known what otherwise might be thought ingenous if acted on without having been foretold (tho' I have already spoken plainly to the same effect) 2. to apprise Mr. V. B.'s government of what I am sure is its jeopardy, and 3. to put in writing a notion or two having the good of his govt. and of the country in view, and I will dispense of the last, first. When I was with him yesterday his greatest desire seemed to be to get rid of me as a disagreeable visitor when I made the suggestions, and you did not appear to appreciate the one I before made to you as of much value: so that having thought of them much myself and become convinced of their importance I shall set them before you for consideration. First, then, I submit that he ought to take some early occasion for making public whatever may be his sentiment and whatever is to be his practice as to the principle of rotation in office. He may escape the odious enforcement of it: but he cannot escape a full declaration of whatever he means to adopt as his rule of action. The witholding such a declaration, perse, I venture to say, will lose him Pennsylvania and there is not the Slightest difficulty about it, for he has only to declare that if laws establish the principle the Executive will as is duty bound excecute them, but will not of himself make the law, and all the difficulties are obviated. The truth is, it is a just principle, which ought to be exercised in his own cabinet, and his shrinking, as it seems to me, from that just duty of his chief magistracy is the ^first^ cause of all the <illegible> ^future troubling^ as I foresee and apprehend it.

Secondly, I submit that it wd. redound to the honor and advantage of the country and his admin to get up, soon, an expeditition, like those sent by Mr. Jefferson far to the west. The Indians, the lands, the whole western interest, which has not now a single representative in Mr. V. B.'s admin (for Mr. Kendall can hardly be counted as of the West) and the interests of science & improvement, all require that some great and signal attention shd. be bestowed on that quarter. It wd. cost almost nothing. I wd. please all those whose good will is desirable, and afford moreover an excellent <discussion> for opposition to spend itself on. It is light in itself and politic besides. The Indians, the lands, the waters, the minerals, the politics, the resources and the characteristics of all that great region might be made the most of, at small expence, to the great benefit of humanity and the U. S. to the great honor, present and historical, of Mr. V. B.'s admin, striking its attachments throughout the west. So at least it strikes me as I cd. develope this mere disclosure by much more extensive views in detail, but I stop here for the present Thirdly, and in our foreign relations I believe the new administration may accomplish national benefits that will surpass even Genl. Jackson's brilliant success abroad. Mr. Jenifer has lately announced a resolution calling on the President to endeavour to extend the tobacco export, which is very well, but absolutely nothing to which may be done for cotton. I will send you a copy of a letter I wrote <illegible> in 1829 when the present french gov. was first established to show you of views I have cherished on this subject for many years. I often conferred with Mr Livingston concerning them & he appreciated them perfectly. I moved them as resolutions of the Pennsa. Legislature in 1830 and they passed this house of rep. by large majorities; but the same base party, to which I dread Mr. V. B.'s yielding,and if he does one jot I am his enemy, out of some jelousy to me, as Burden's motion laid them on the table in the Senate. They propose that the governments of France, Germany and Switzerland should be dealt with to prevail on them to afford greater facilities for the reception of the cotton, tobacco, coal and such of our produce which the foreign consumption may be immensely increased. All that is wantg is some modification of those tariffs, which I think (and so did Mr. Livingston after his return, as he told me) may be achieved (at any rate it is worth trying and wd. cost very little) by a different mode of negotiation from that hitherto pursued. First, by sending commissioners on purpose, to cooperate with the stationary ministers (which power the President has, even without nomination to the Senate—tho' there is no reason why he shd. not nominate, unless he wishes to make the commission select, which perhaps in some cases wd. be an advantage) Secondly and by instructing those special agents to deal in the public opinion as well as governments; by Enlighting public sentiment thro' the press and other such means Understand me as not having any nefarious means: no bribery or corruption, common as they are in all European diplomacy, and were we to <illegible> an amicable appropriation of secret service money. But I discard all that in my project which is to furnish an agent in France for instance with manly money, enough to get a graph of good information put privately into the stock of the press, and otherwise to deal among certain classes and individuals unknown to the government at the same time that the public minister of this country is publickly pressing the public ministers of that. All the French liberals are patricians of free trade. Among my friends of the Bonaparte party there are plenty who could be enlisted who are members of the Chamber of Deputies. I cd. name them: and in short I have no doubt that the cotton export to France and thro' France to Germany & Switzerland might be vastly increased Now ponder this as to its effects on the US, in the South (to be effected by it as the west wd. be by the western enterprise I have before mentioned) on the Union as on every thing, and I flatter myself that tho' the notion seemed to make no impression on you when I mentioned it to you, yet you cannot reflect upon it without conviction of its worth.

The foregoing was written on the Chesapeake and and now after reading it all over on my native Delaware I find nothing to change uncouth as it is. At the same time however it is proper I should add that this is not a threatening letter. Not at all. It is th a letter to a friend to express what I feel and which I mean to say and do I do not presume to say that if Mr. VB does so and so that I will do so & so: but to account to him thro' you for what he might think strange and ungenerous in me if I did not apprise him. I shall become one of a small party, I dare say, for I shall not join the enemy, but with my views and wishes a small party growing on proper grounds is much preferable to the large one which I think Mr. VB will see dwindle fast. You & I have always gone together and I hope we may yet as I am 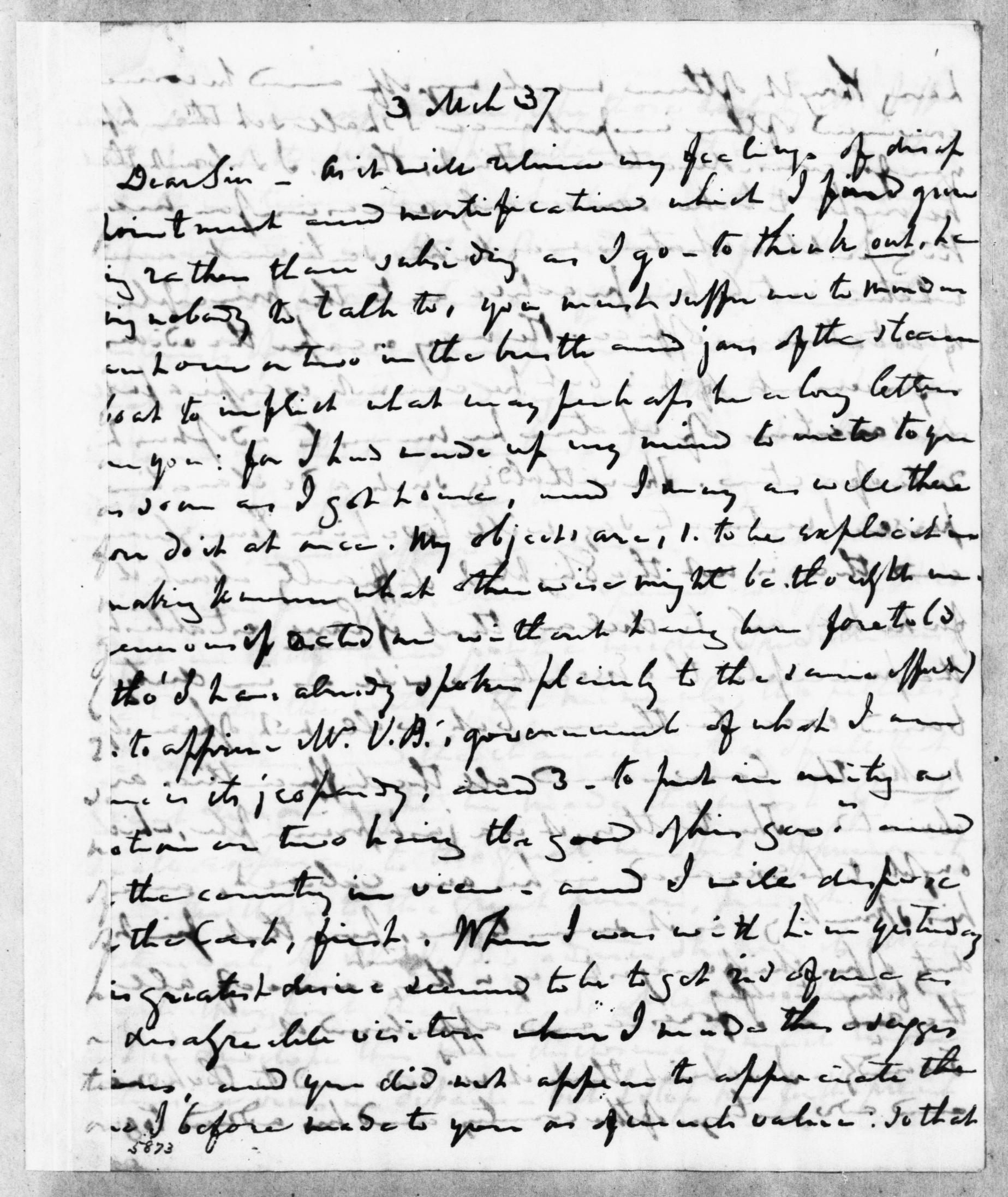 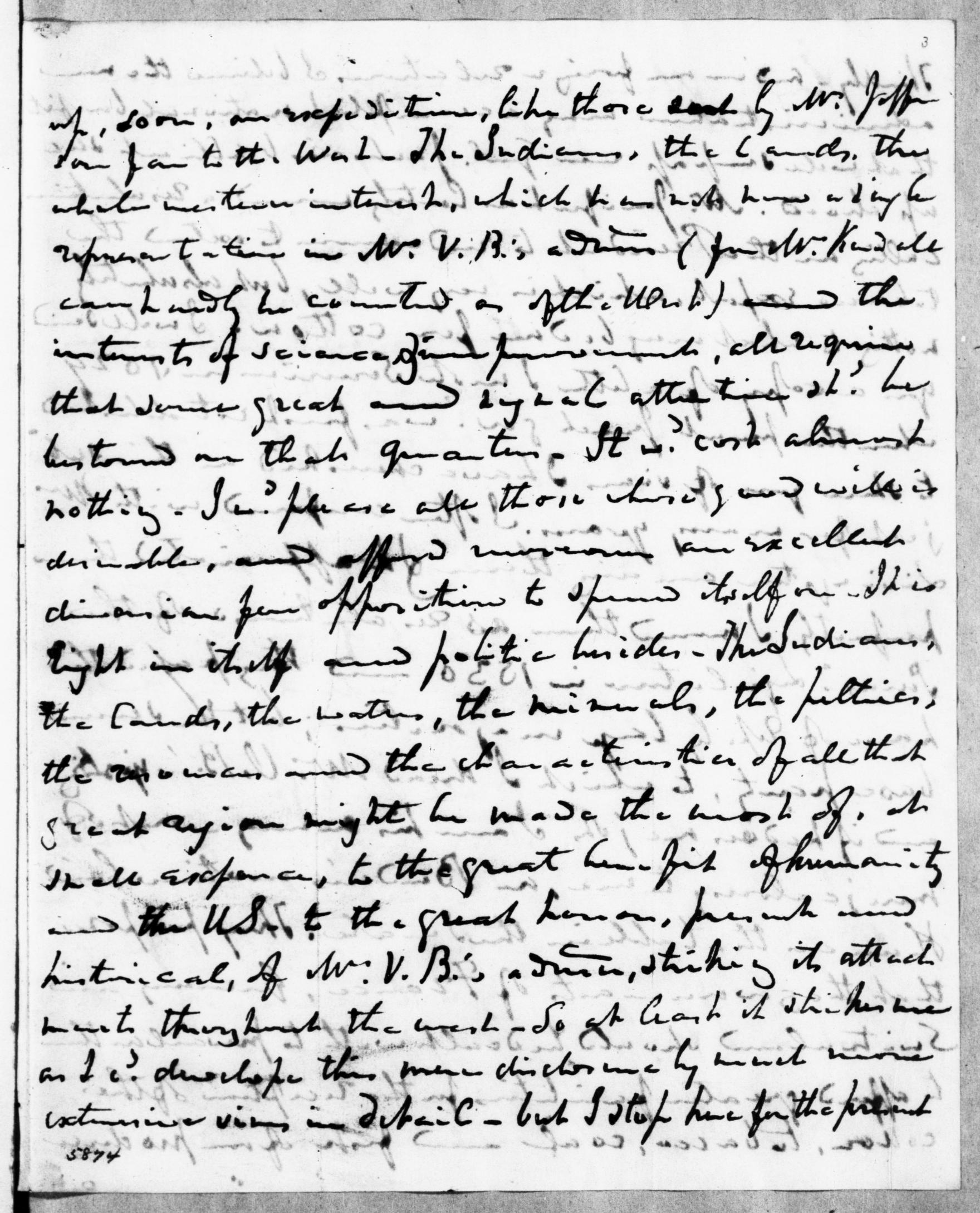 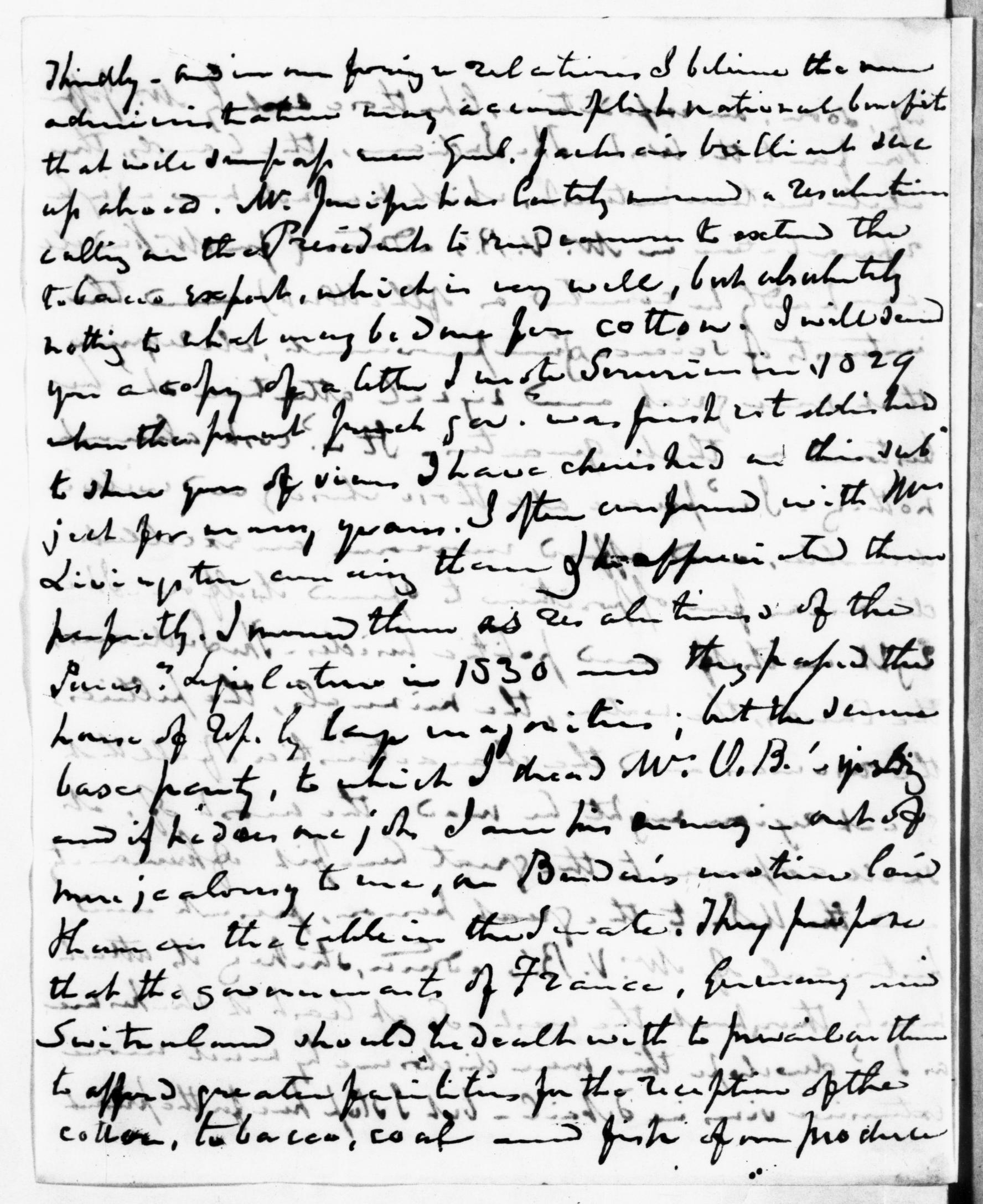 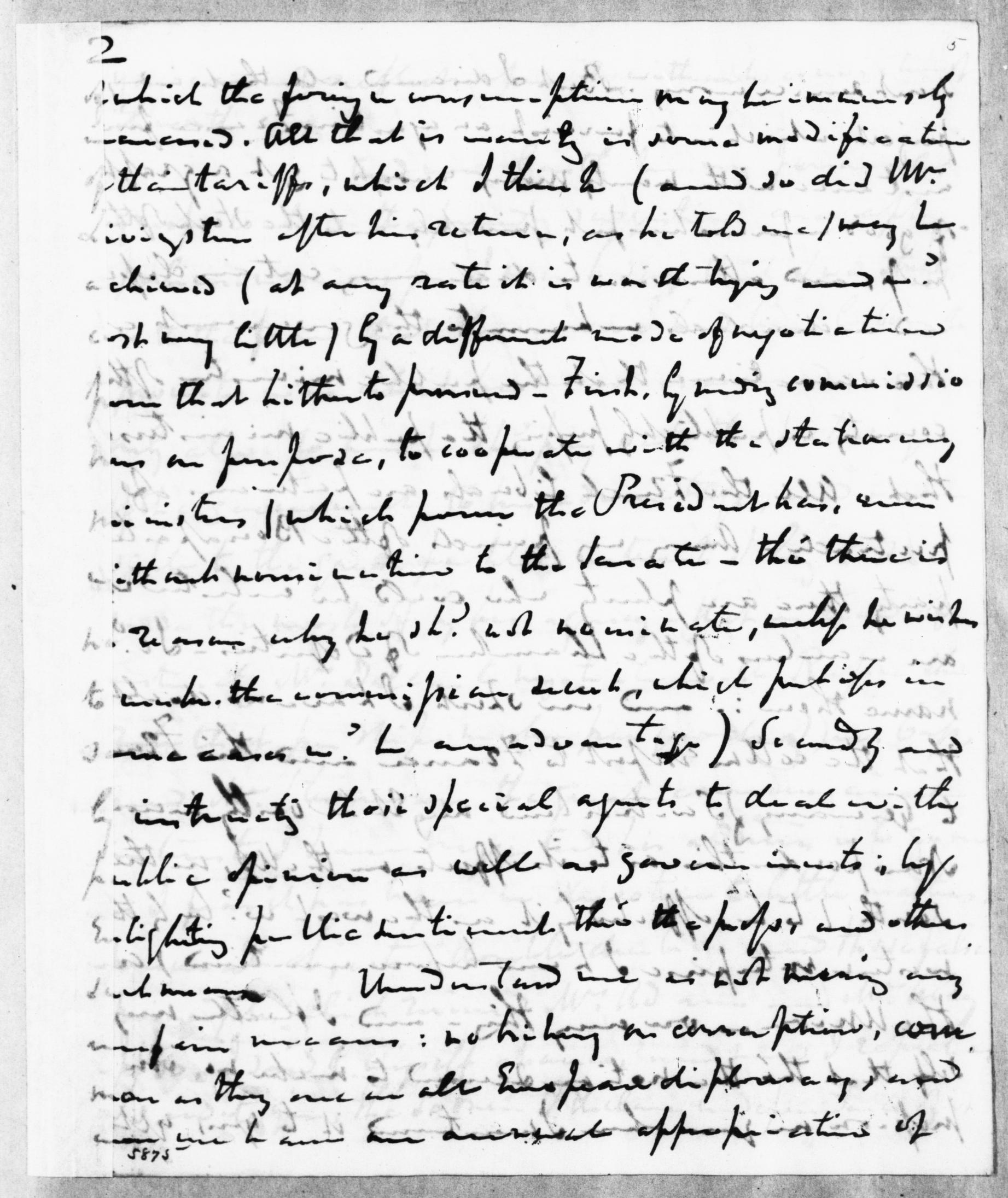 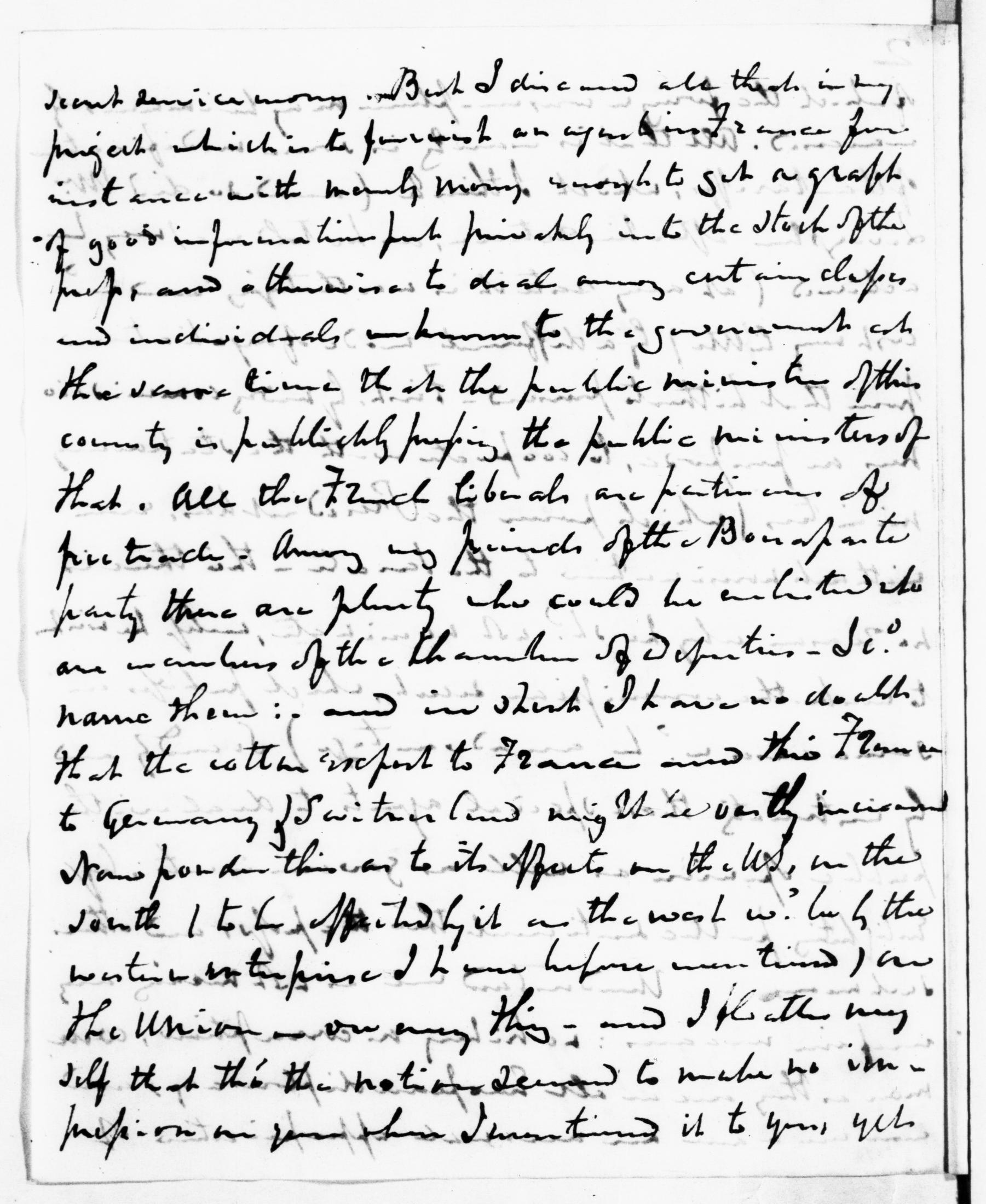 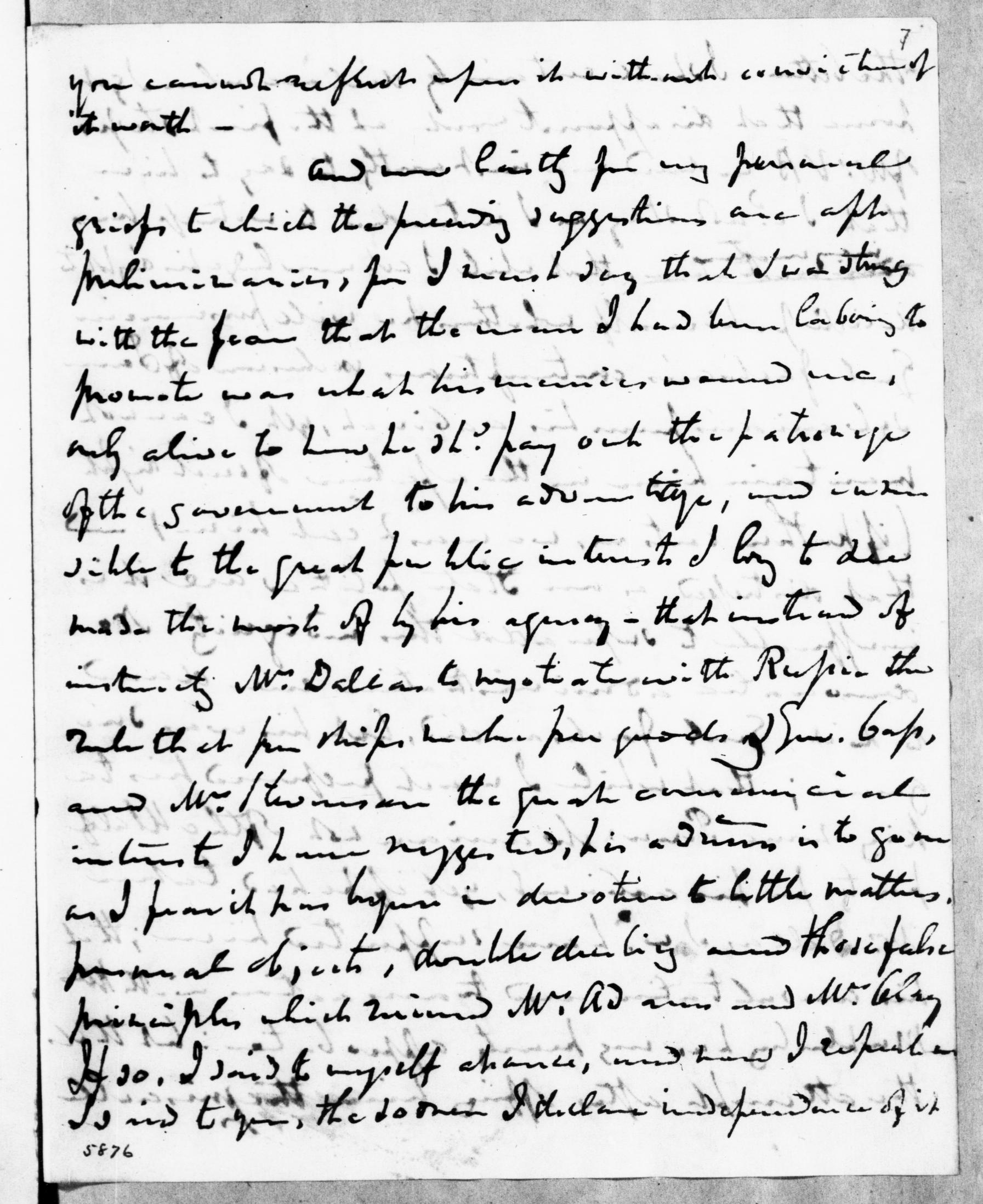 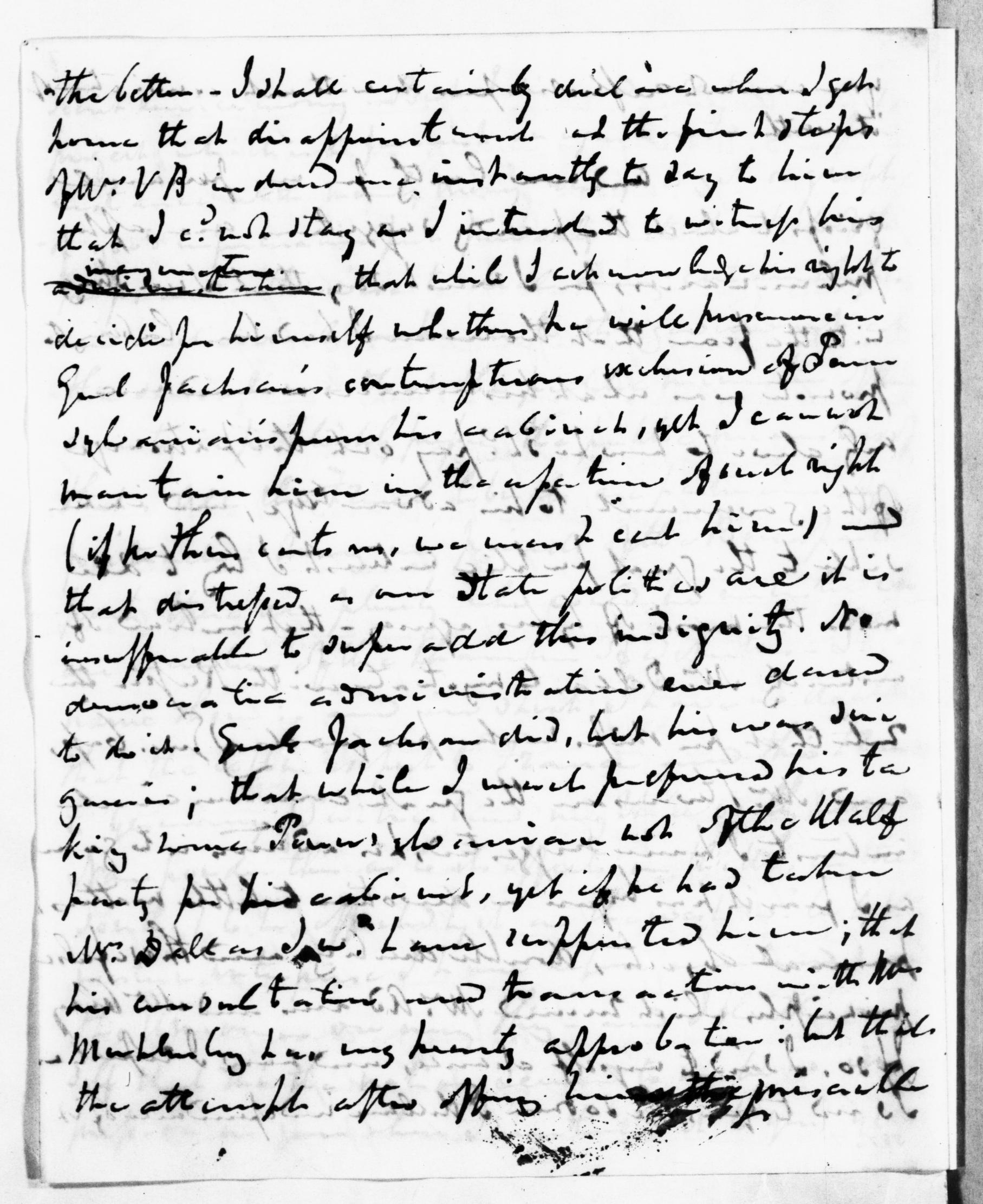 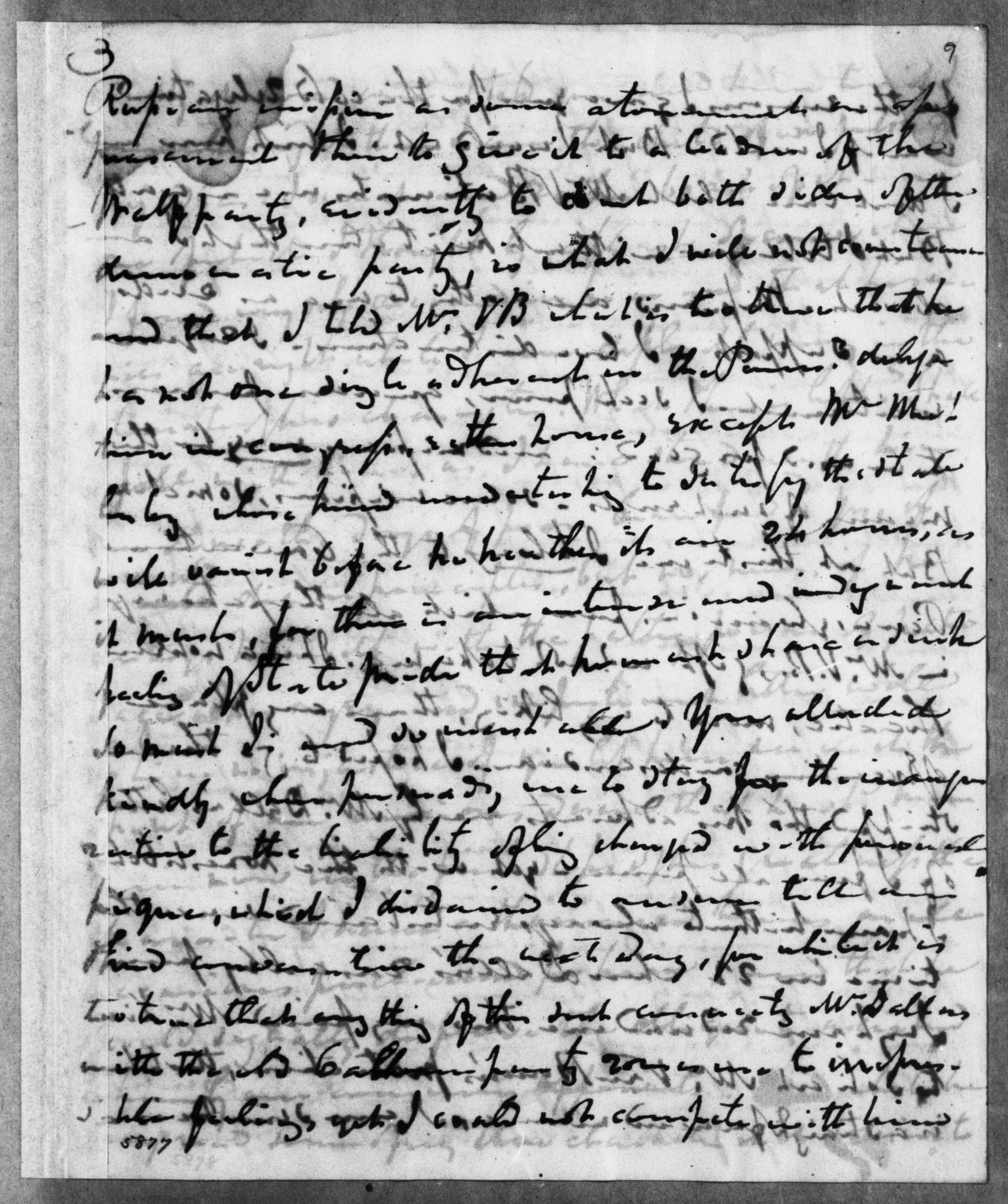 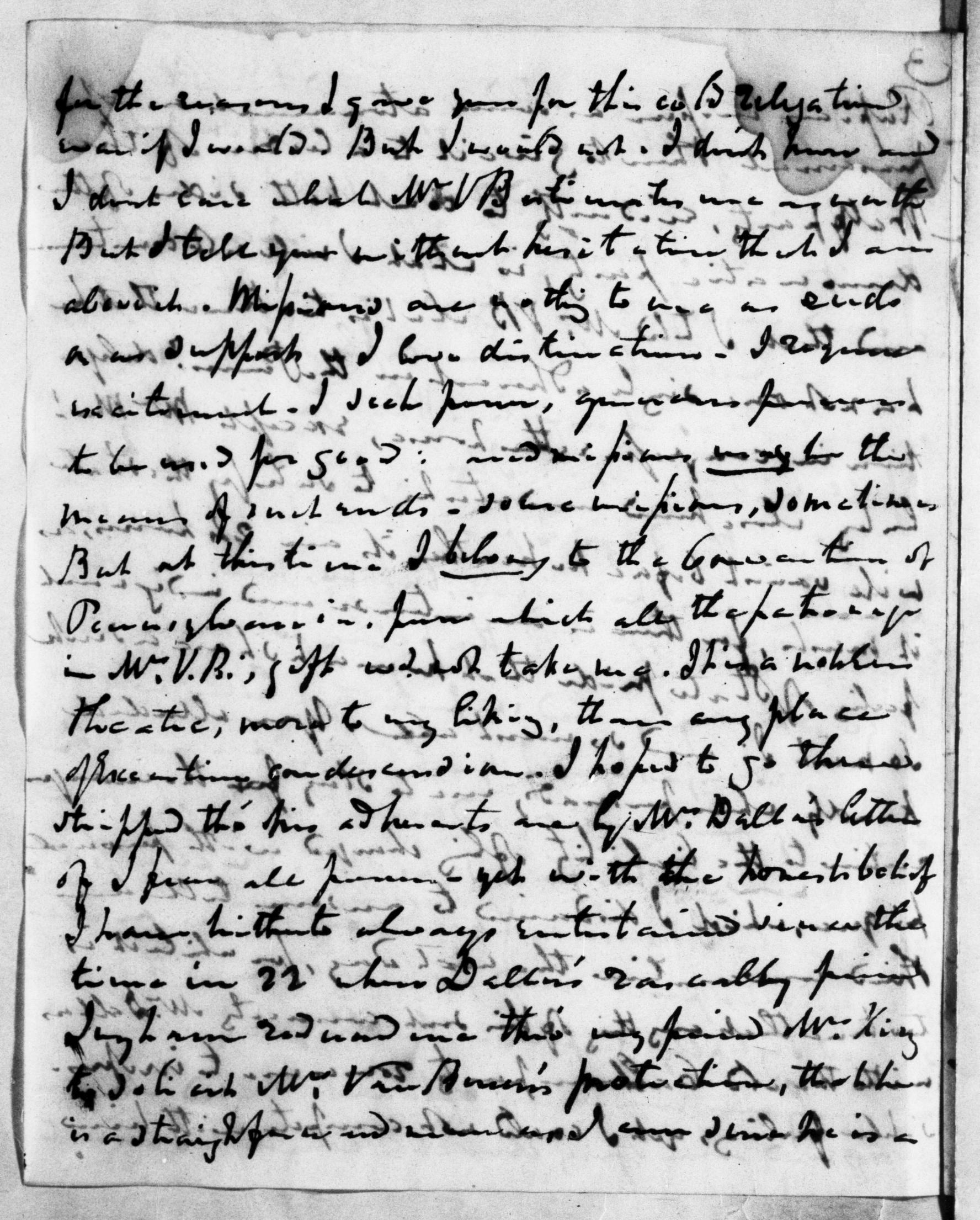 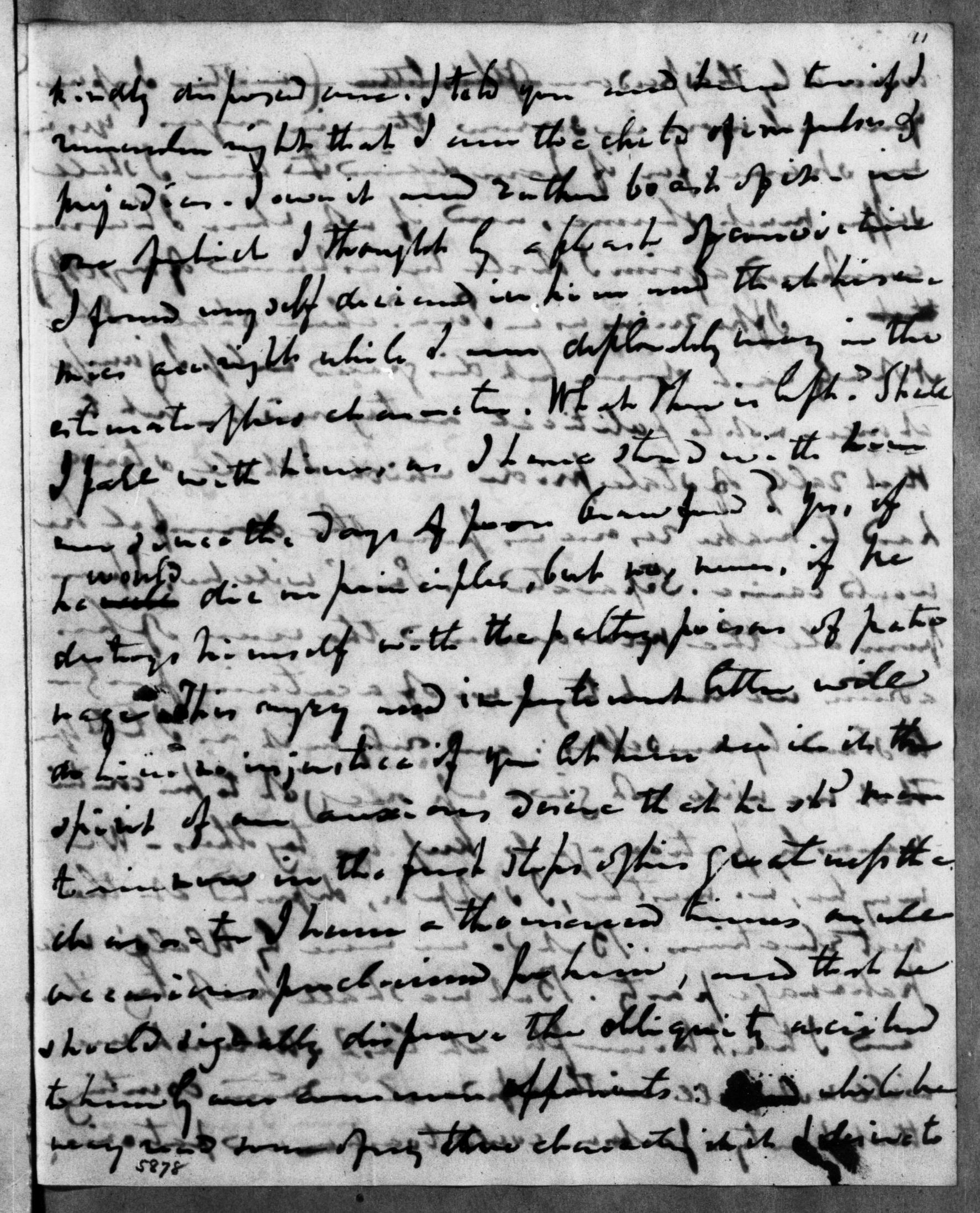 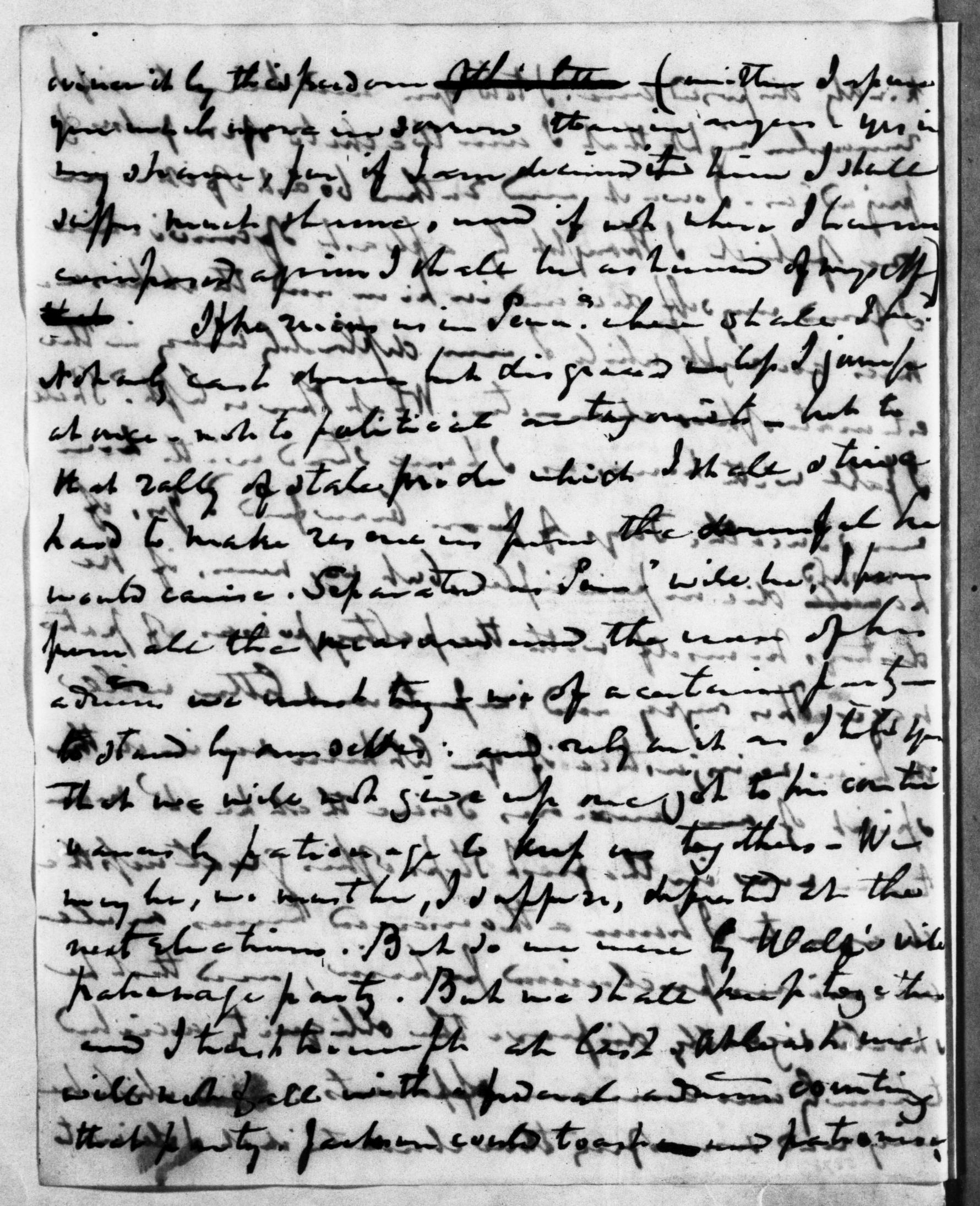 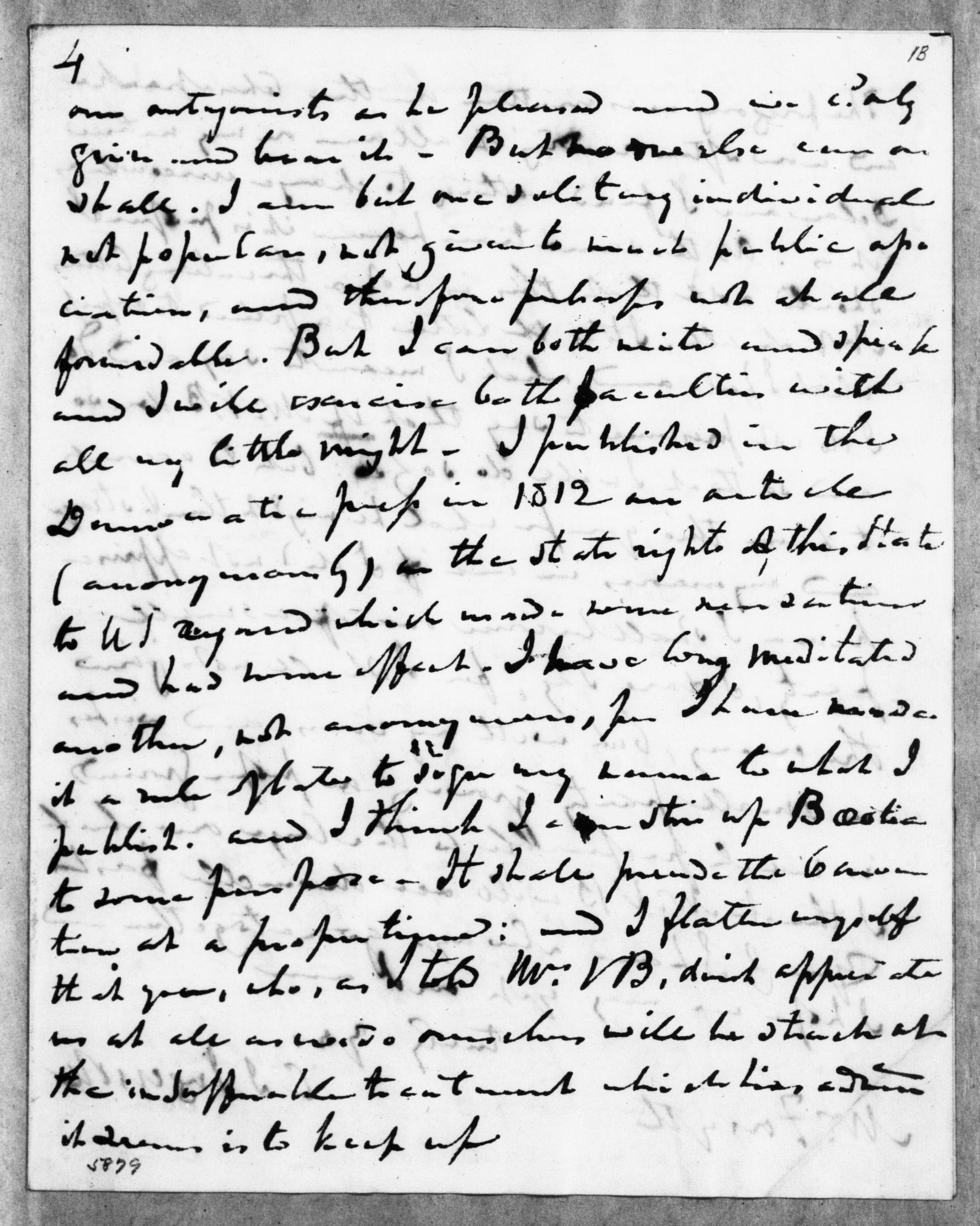 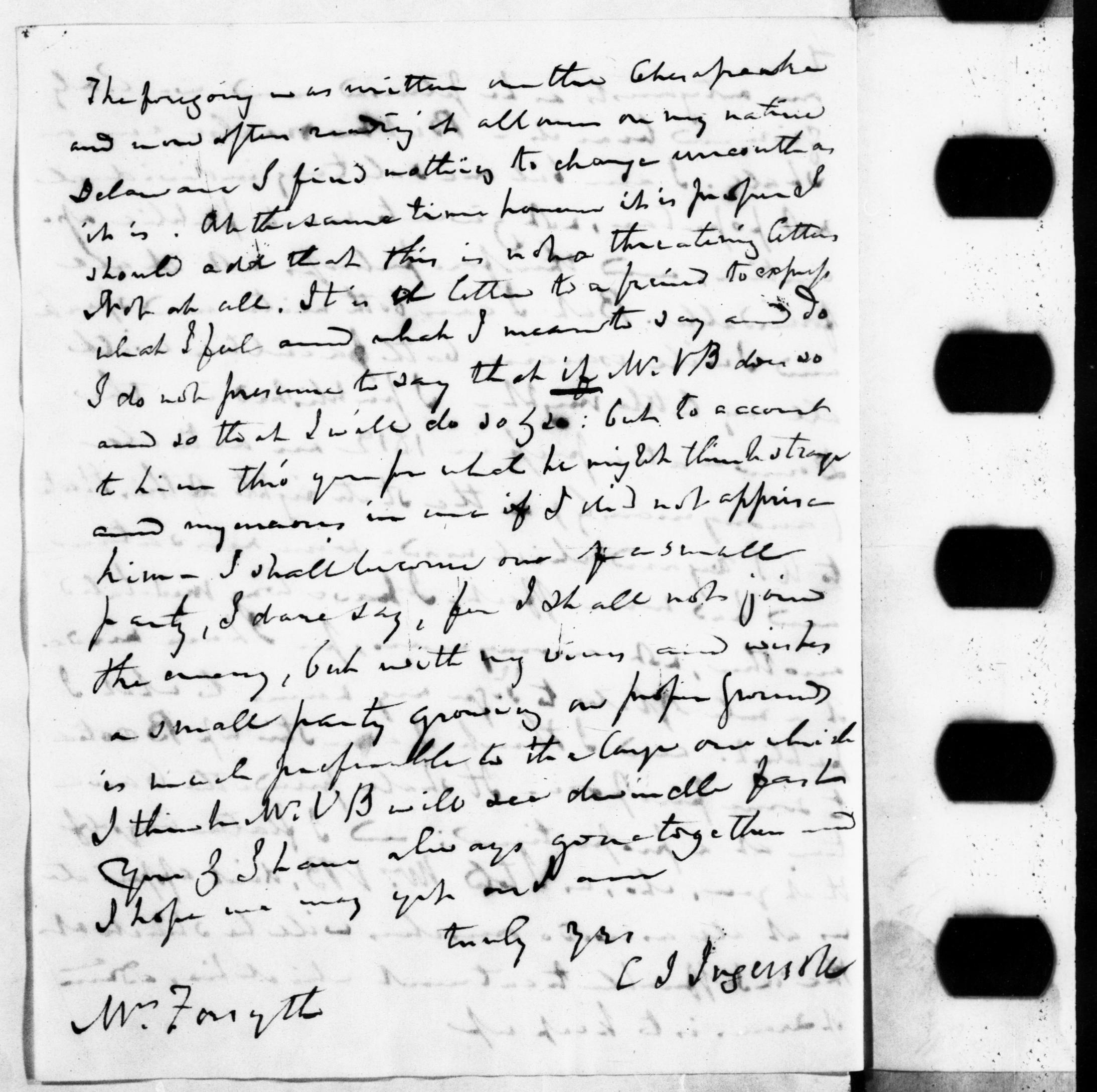 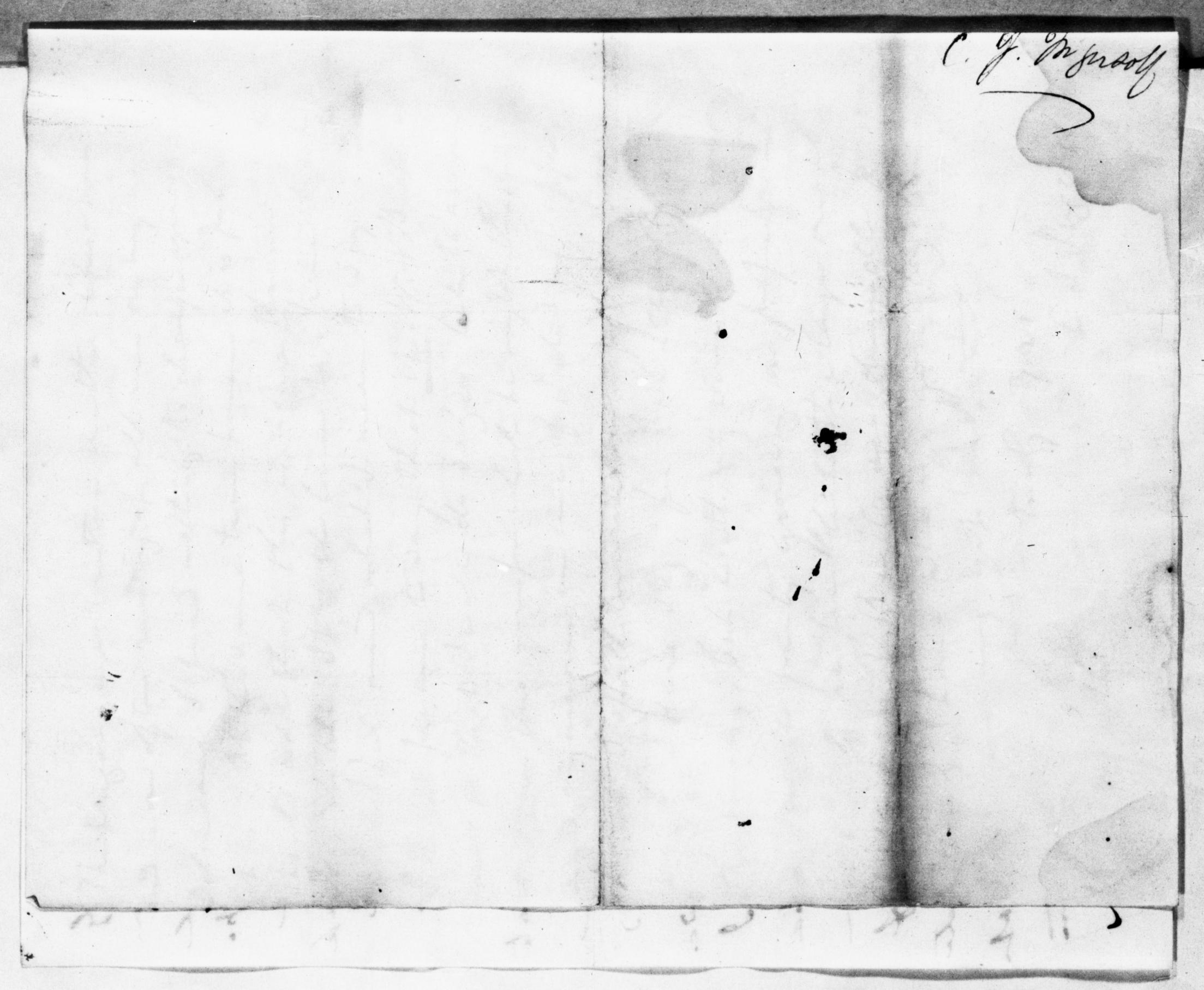