The Answer of the Senate to the Speech of his excellency to the Governor.

The Senate at the close of their last session indulged with your Excellency in the pleasing expectation, that before this period the blessings of peace would have been restored to their country on terms consistent with its honor & Interest, they are however by subsequent events reluctantly compelled to bear testimony to the insincerity of the professions on which those reasonable expectations were founded.

They have seen the enemy while indulging in the vain hope that those professions would lead us into fancyed but fatal impressions of security applying his energies to a vigorous prosecution of the War, and they have seen too with regret although not with dismay, that after having thus added duplicity to outrage, he has conducted the contest in a manner in the least degree disgracefull to a civilized nation & totally repugnant to the established rules of legitimate Warfare.

That he is actuated by the most malignant hostility, that during the present season he contemplated the most extensive injury to the future welfare of our beloved country, if not the destruction of its constitution & the consequent prostration of our excellent political institutions, that intoxicated by the recent events in Europe which have given to the political complexion of the world ^a new character^ and seduced by his unlimited confidence in the invincibility of his Legions, he fondly hoped to carry victory into the very heart of the country & by the wide spread desolation which should mark his course to compel the american people if not to acknowledge the legitimacy of his authority at least to recognize & admit the supremacy of his power, must be obvious to all.

The Senate therefore in common with your excellency and as they hope the whole American people "cannot but exhult that thus far we have sustained the Shock with firm & gathered laurels from the Strife," that although he has succeeded in pem^n^etrating to the Capital & in the conflagration of the monuments of art with which by the enterprise & public Spirit ^of the nation^ it had been adorned, his success has before this time been embittered by with the reflection that by their blaze he has kindled a flame of patriotism, which pervaded every section of the union, by which he has been severely scorched at Baltimore & which threatens his compleat annihilation at p every assailable point of the union to which his ambition or his resentment may lead him.

The Senate have witnessed with the same emotions, with the same enthusiastic admiration evinced by your excellency, the brilliant exploits atchieved by our army & navy during the present campaign, atchievements, which in their consequences have been so immediately & extensively beneficial to our frontier citizens, atchievements which will not loose in ^the^ comparison with the most gallant efforts of the veterans of the old world, exploits that have pierced the gloom which for a season obscured our political horizon & dispelled the fearfull forebodings which past disasters had excited, exploits which have fully maintained if not enhanced the proud & enviable fame of our gallant tars, which have covered the actors in those bright scenes with never fading laurels and which will, untill public gratitude ceases to be a public virtue ensure the highest testimonials which a free people can yield to freemen. Unceasing reverence for the memory of those who have dyed on the field of honor & acts of unceasing gratitude & esteem for towards their noble survivors.

The Senate have seen with great saisfaction the prompt & efficacious measures adopted by your excellency to avert the dangers which impended the State, and believing as they do that whatever excess of executive authority may have been indulged in, it has been not only exclusively intended for the promotion of the general good but was moreover rendered indispensible to ^by^ the imperious nature of existing circumstances. They cannot doubt but that the acts to which your excellency has referred will be such as to command your ^our their^ approbation & support of the Senate.

The Senate cannot forego the opportunity aforded ^them^ of uniting with your excellency, in an expression of the high satisfaction with which they have observed the encreasing unanimity & noble ardour in the our countries cause which pervades almost the whole community.

That on question of local policy and the fitness of men for public stations we should ever be exempt from differences of opinion was not to be expected. Divissions like those are inseperable from our free the blessings of our free constitution and although sometimes carryed to excess & made to produce a virulence & malignity which all good men must deplore, they are notwithstanding productive of much national good. But to have supposed that ^[. . .]^ a people Jealous of their rights & proud of their rights & national character could, on the question of resisting the aggressions of the open enemys of the land, aggressions which have polluted the soil & which threaten the demolition of those fair fabrics which have been consecrated to freedom by the Blood & sufferings of their fathers, that on a question of such vital moment, so well calculated to excite all the patriotism, to arouse all the Spirit & to call into ^vigorous^ action all the lattent energies of the nation, they would long continue to waste their strenght in criminal and unprofitable <distolution> collisions would have been a base libel on their character.

While therefore the Senate will at all times do all that in them lies to frustrate the efforts, to defeat the projects & to expose to public obloquy & reproach the conduct of all those who destitute of that noble love of country which should characterise americans at this perilous crisis of our affairs who perfering the Interests of party to those of their country or actuated by motives more deeply criminal, shall attempt to aid the foe, by heaping unfounded calumnies ion the constitued authorities of the Country, or by ^shall^ seeking to excite distraction & alarm in the councills of the nation or in any other way attempt to paralize the arm of goverment. Yet fully sensible that "every difference of opinion is not a difference in principle" they will on all occasions feell it to be their duty as it is their wish to afford to merit its ^the meritorious soldier his^ due reward, without regard to sect or party.

The great Interest which the State of Newyork has in the prosecution & termination of the controversy in which our coutnry is involved, the high destiny to which her local situation, the extent of her resources, the liberality of her legislature & the ardor of her sons may lead her have been duly appreciated by your excellency. The Senate pledge their best exertions to realise those great & well founded expectations and relying on the Justice of our cause for the approvement of a Just God they cannot but flatter themselves, that in due season the american arms will be crownd with compleat success & the mild reign of peace be restored to our now oppressed & bleeding country.

In the hand of MVB 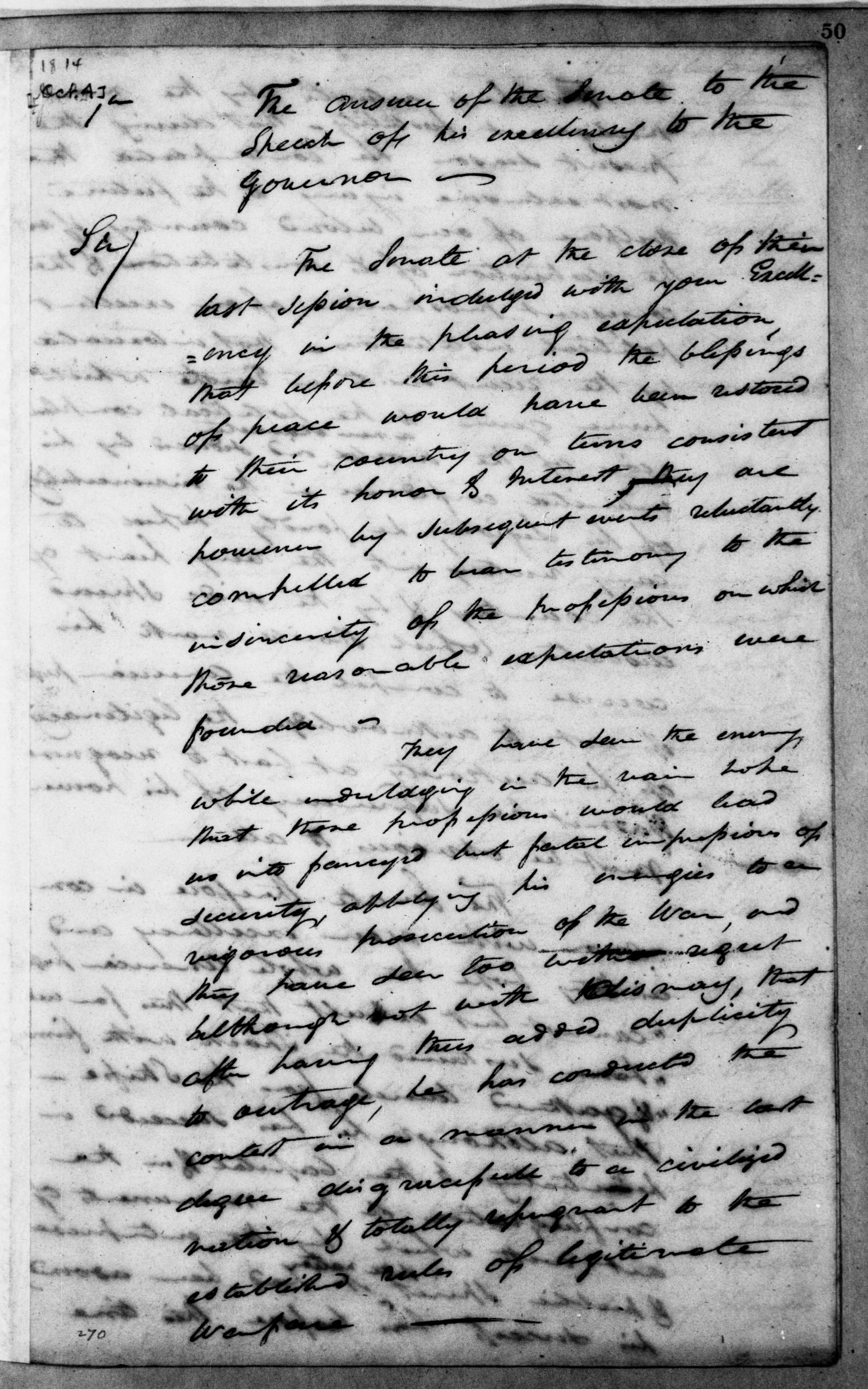 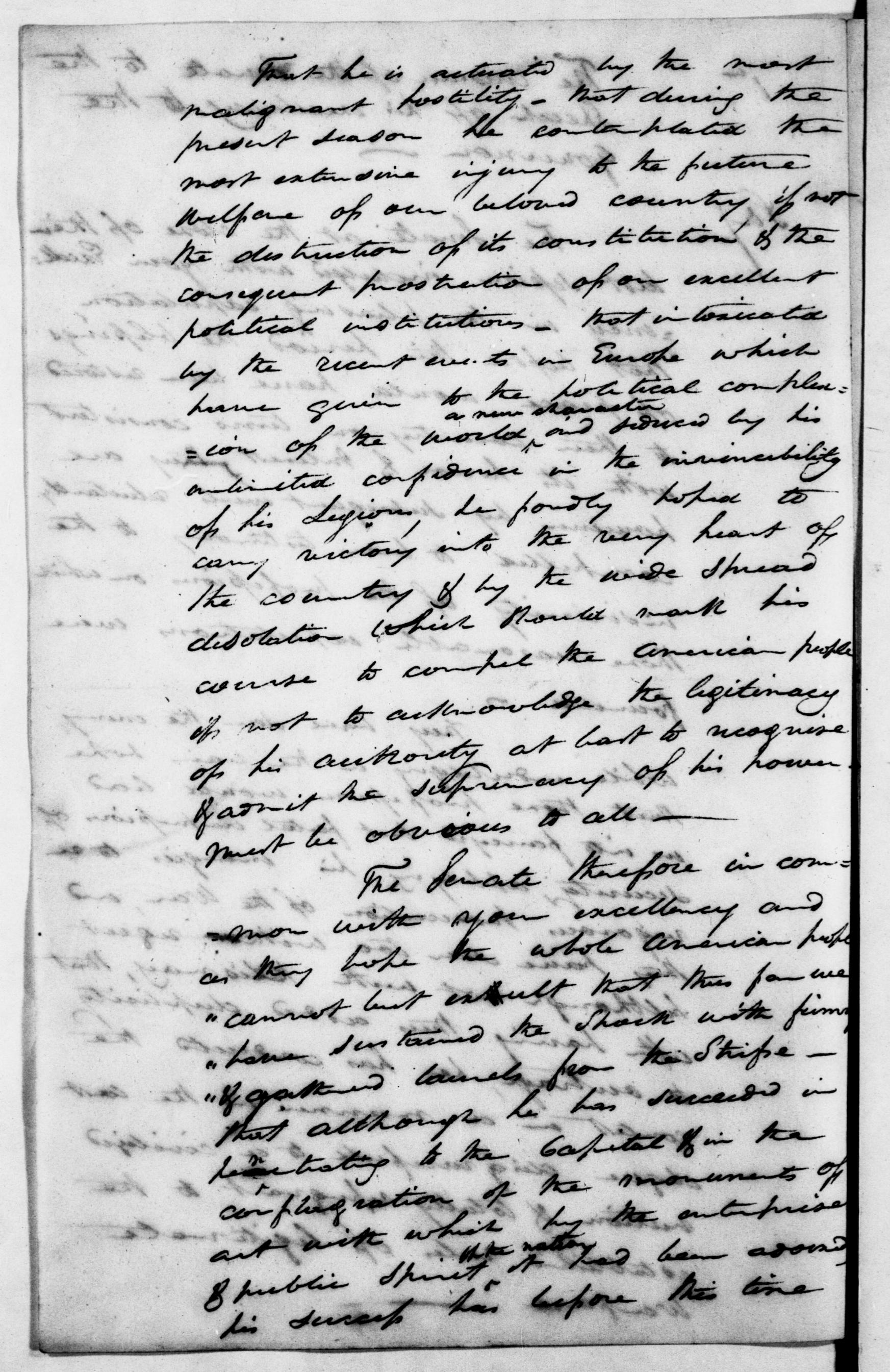 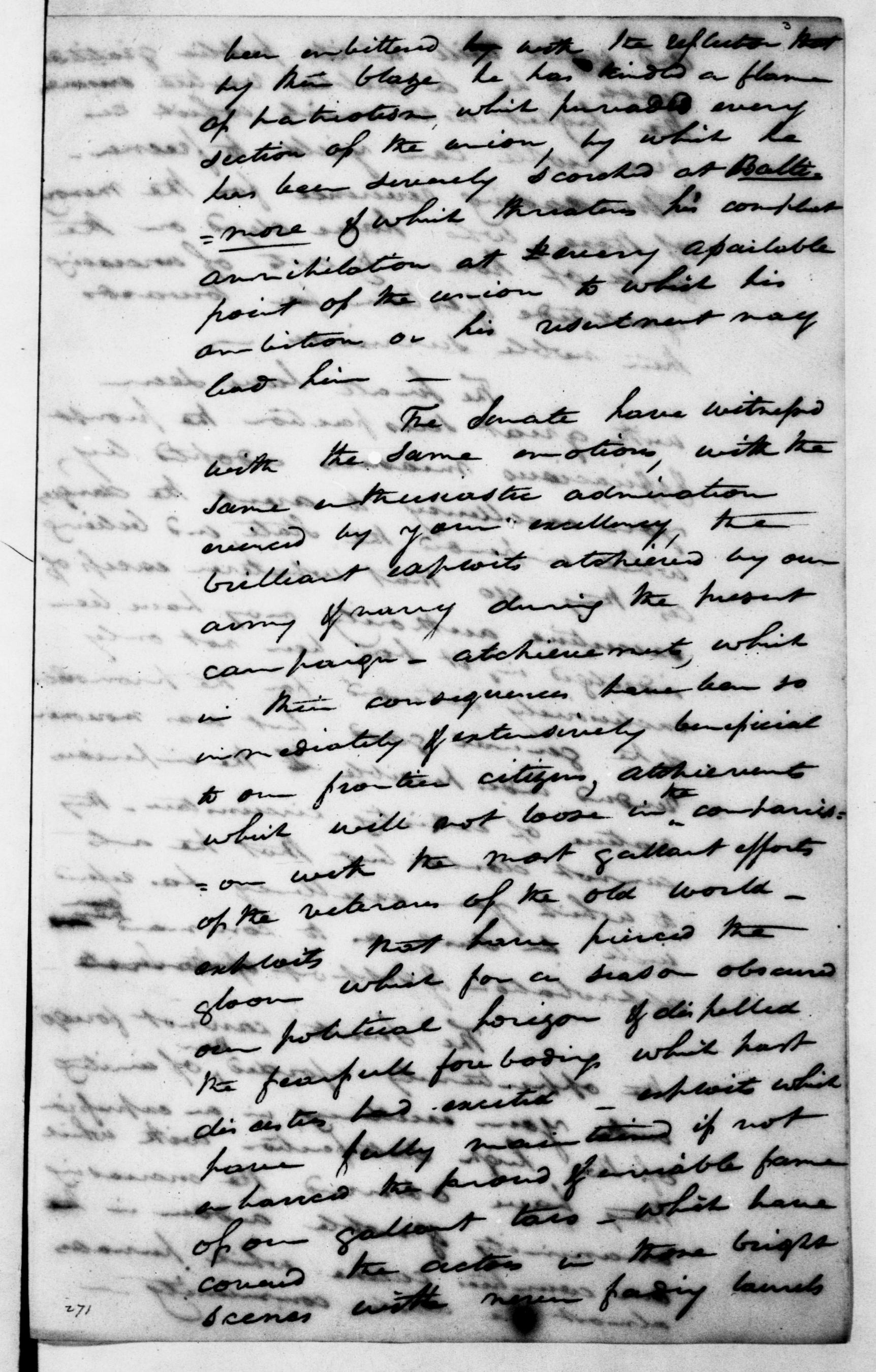 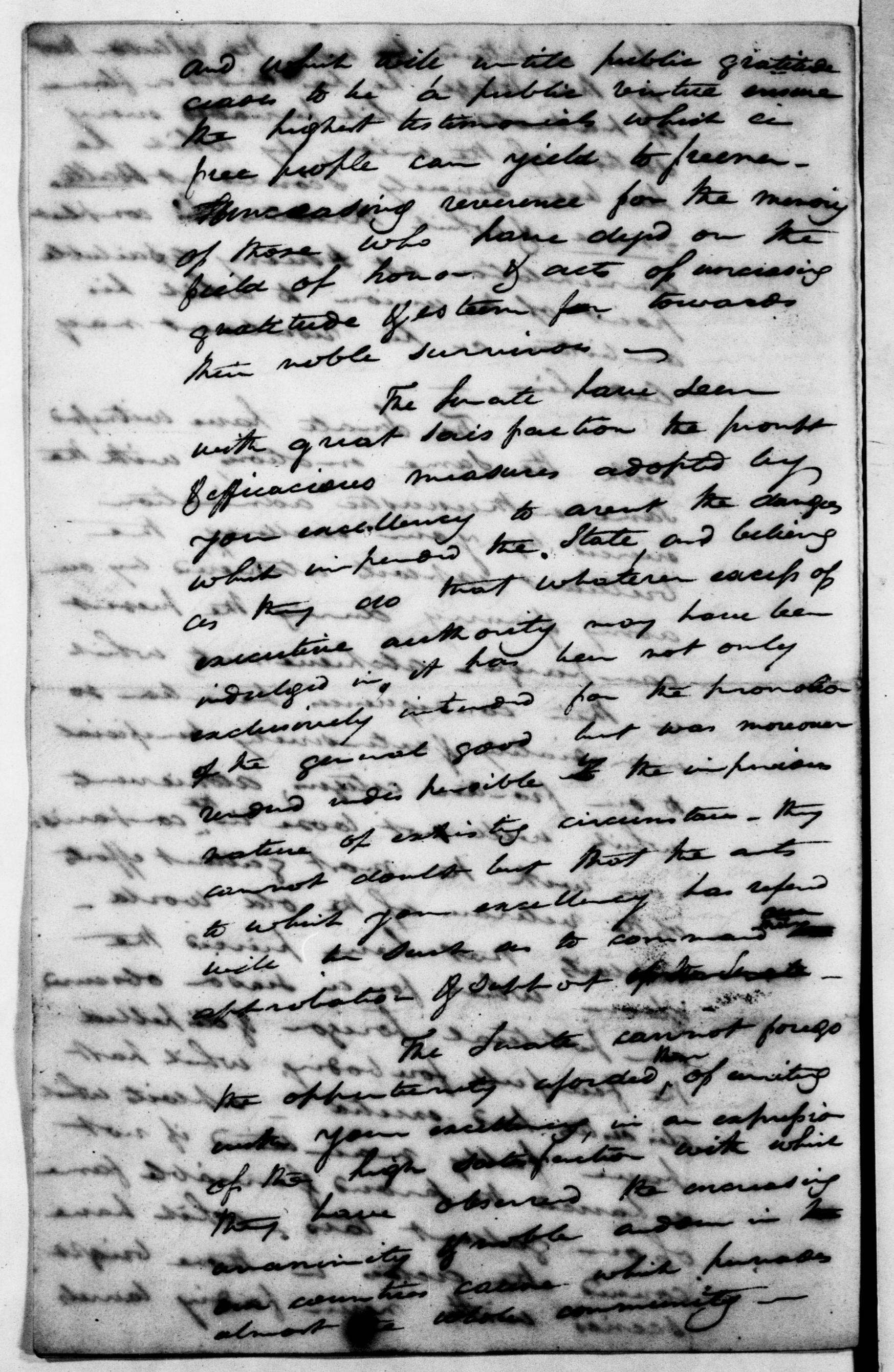 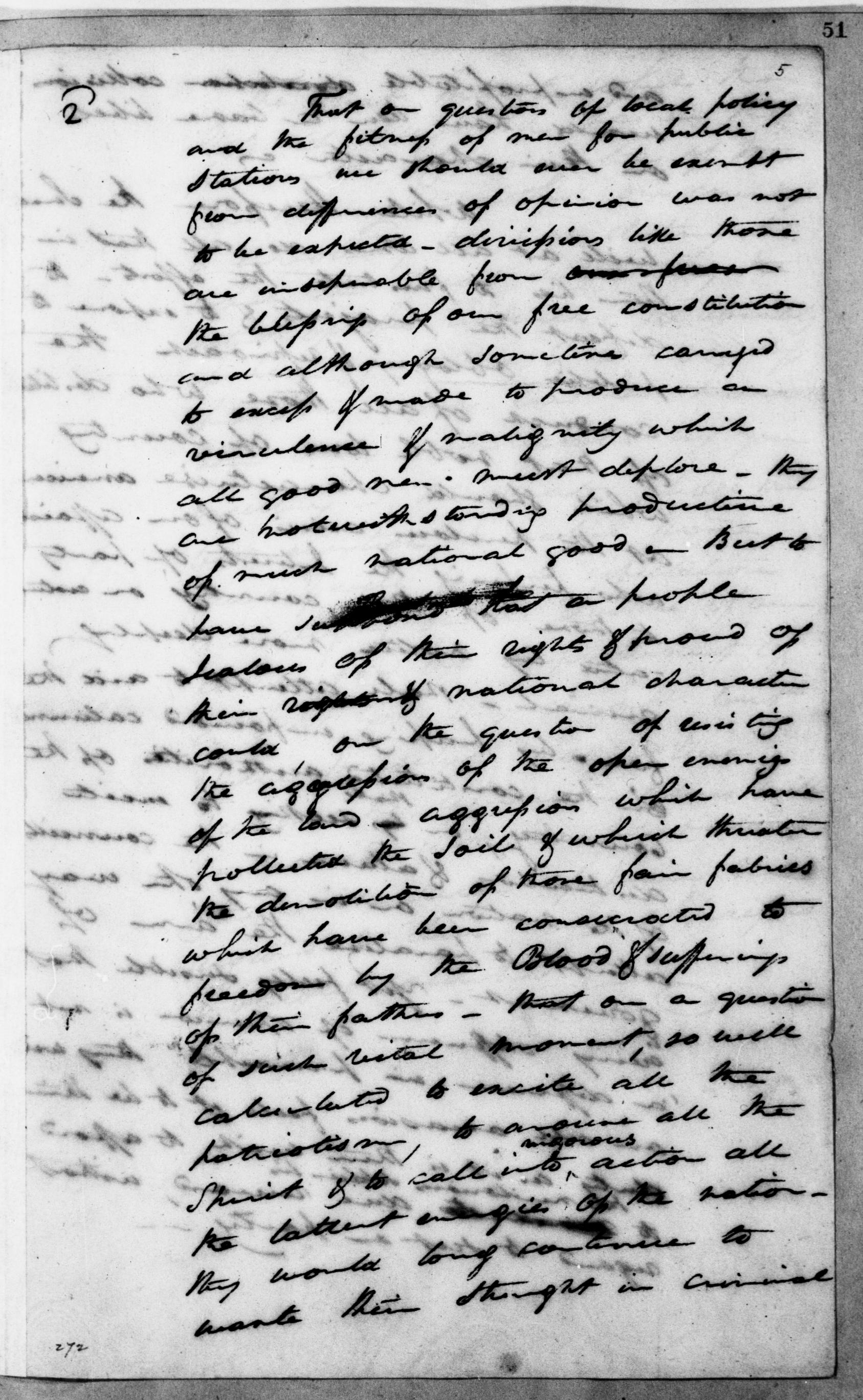 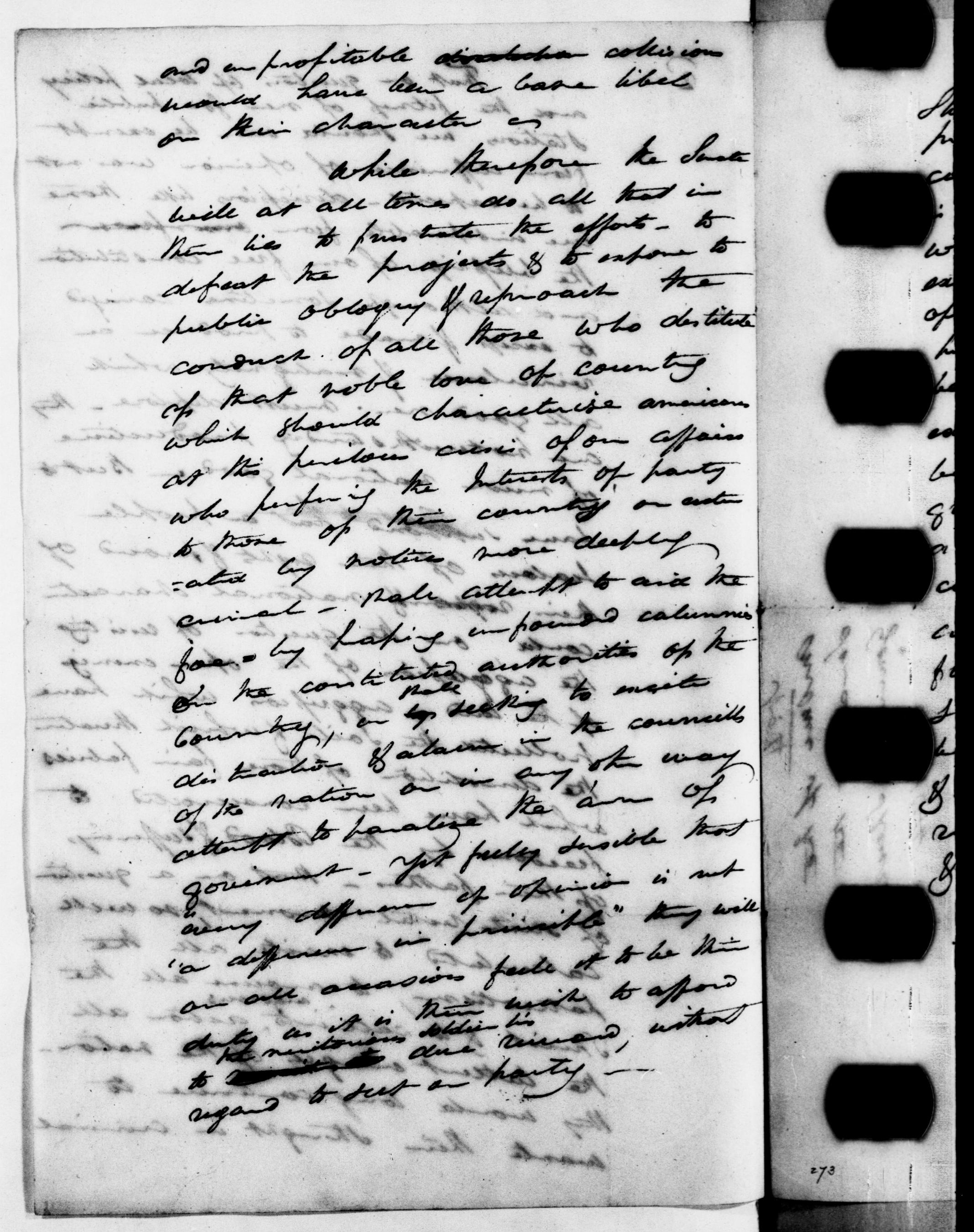 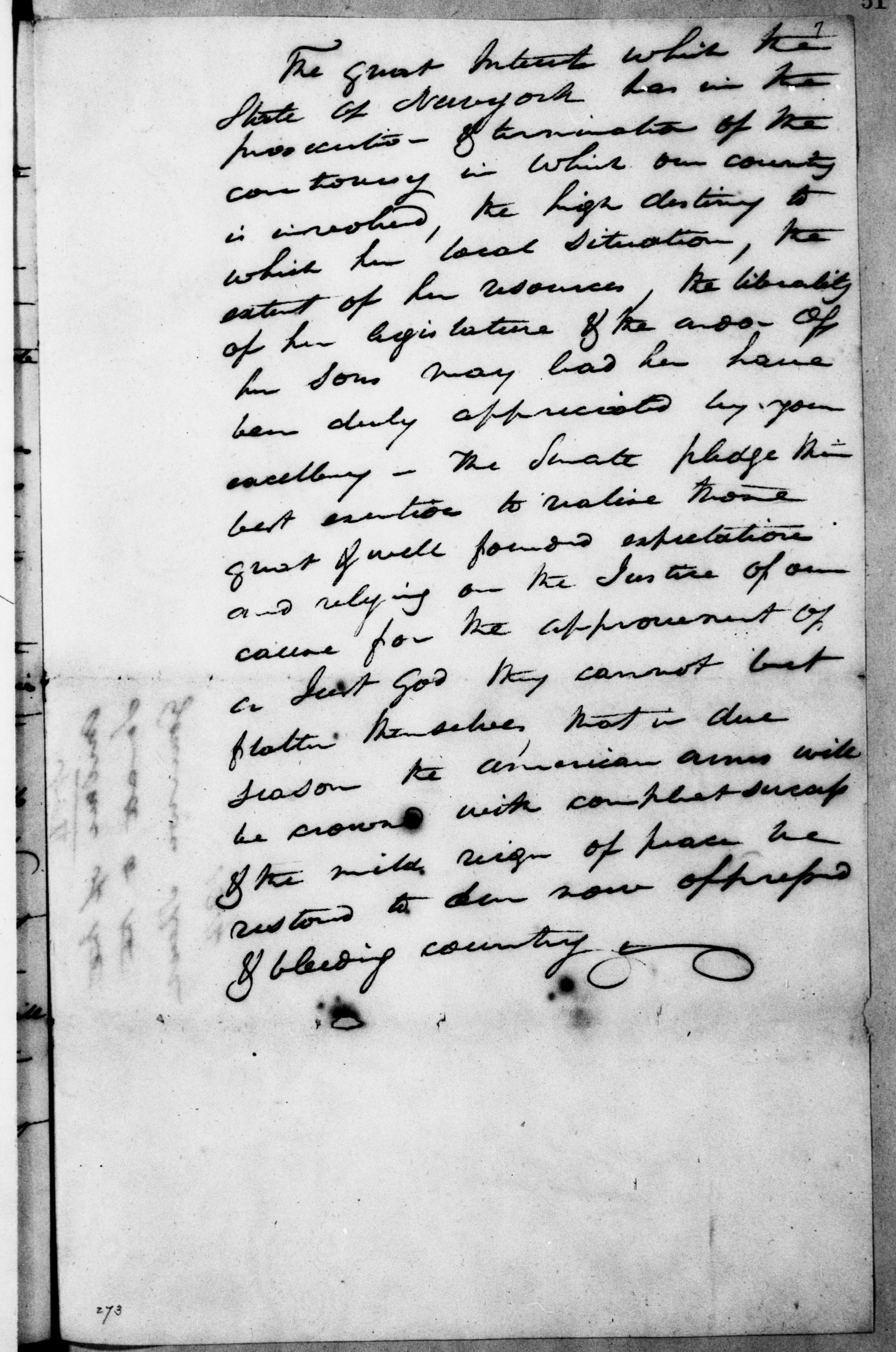 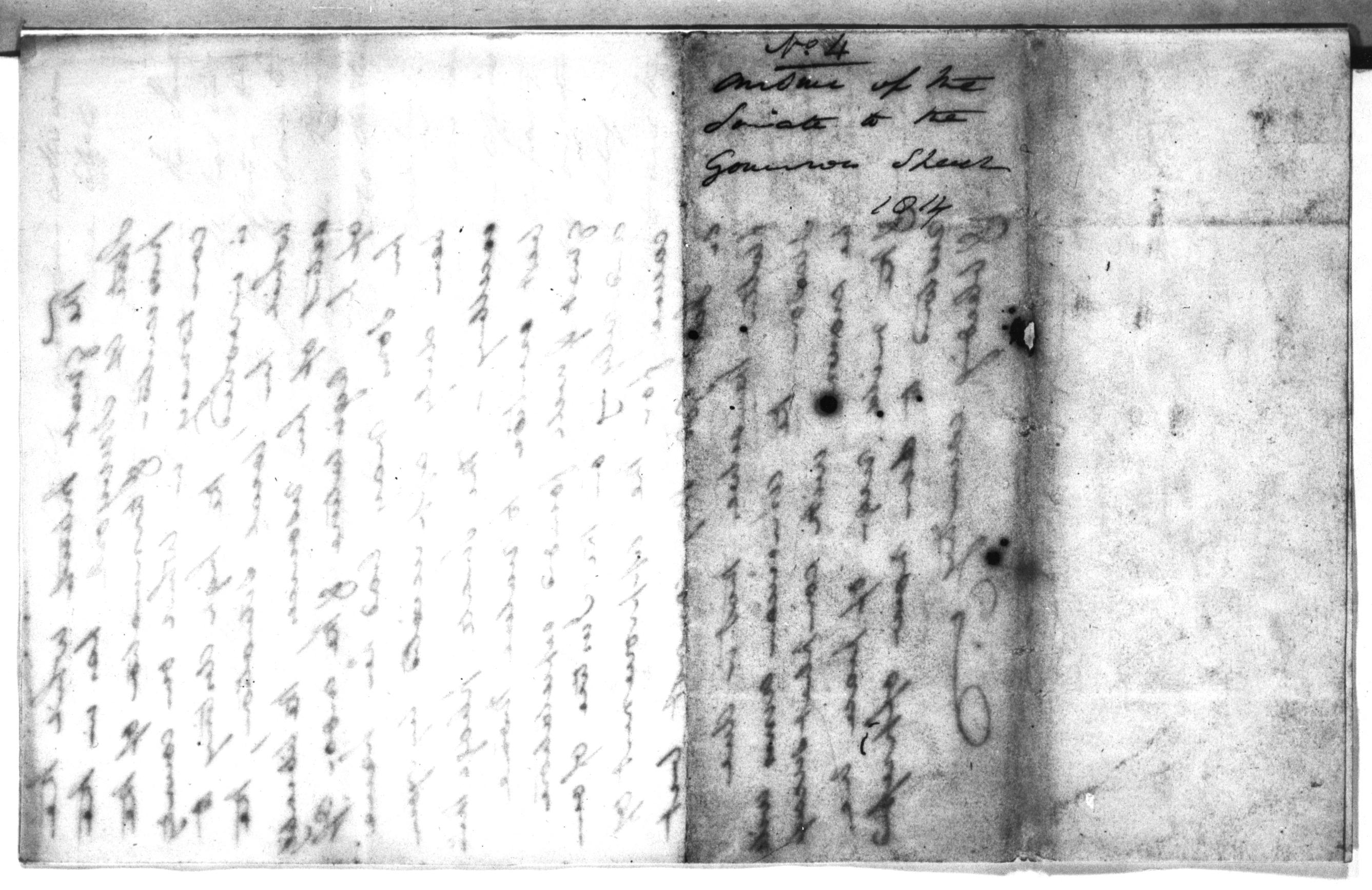