At this interesting period of our national concern ^affairs^, when our government is combating with a view wily vindictive and sanguinary foe, when domestic disaffection & foreign affection ^partialities^ present their callous fronts at every corner & when ^the^ present hopes & future prospects of the people of N york are to be party to the Tested by the result exercise of the elective franchise, ^at a period of such anxiety & solicitude^ this meeting composed of Citizens from vari ever almost every section of the State take the Liberty expressing their ^of^ publicly to expressing their Sentiments on the subject of the as before them.

That "every difference of opinion is not a difference of principle" that on the various Subjects questions concerns and operation of government on ^with^ which the public Welfare may depend ^is un connected^ an honest difference of opinion may exhist and that when those differences are discussed within the and the principles of contending parties sought to be informed supported with candor fairness & moderation & try <more> within the <people> of a <illegible> the disco very discord which is thus produced may in a government like ours be conducive to the public good, we cheerfully admit.

But ^that^ when on the other hand ^the^ opposition to government clearly evince not only, that all their clamours are the result of predetermined <party> and immutable Hostility but ^that^ as between their own governmt & the open enemies of the Land they dare ^as circumstances may require^ unblushingly justify excuse or palliate ^as circumstances may require^ the conduct of the Latter & falsify, calumniate & cander that of the former and when ^als too^ in the mean which are used to promote effect such unhallowed purposes, they are alike indifferent to the Salutary provisions of the constitution, or the obvious cl the requisitions of national Interest or the obvious dictates of national honor. ^That at such a time^ it is the duty of every Sound patriot to do his utmost to arrest their gu guilty career & rescue from their aspiring grasp his bleeding country, no good man should ^will^ deny.

To prove that such has been the conduct & that such are & have been the view of the party in this country which styles itself, Federal, "that their History is a history of repeated Injuries & usurpations all having for their direct object" either the Subjection of the rights & Interests of their country to her ancient & unceasing foe, or a from base prostitution of its fair fame for selfish and ambitious purposes "Let facts be submitted" to an intelligent & patriotic people.

Theyir opposition since the <grave> <work> ^for the last thirteen years^ has been <univef> universal, amid malignant & unceasing & wholly without regard to ^<illegible> in^ circumstances <illegible>

Their opposition has been ^was^ equally virulent when our Country was basking in the Sunshine of ^unparalled^ prosperity as it has been while her political horizon has been obscure obscured by the clouds of adversity.

They opposed the reduction of the national debt when the means of its reduction were in the power of the Government.

They opposed the increase of the national debt when its increase or an abandonment of every attribute of a free people was ^had^ become our only alternative.

They clamored much on account of the aggressions on our commerce by the Belligerents & their merchants presented petition after petition & memorial after memorial to Congress to vindicate our commercial rights.

They have uniformly opposed & calumniated & opposed every measure of the government adopted for its ^their^ vindication or support.

To enumerate the various acts wh with which the feelings of the american people have been wounded & insulted, ^the^ occasion <wants> will not allow ^admit^ of. Let their most prominent acts therefore be alone considered. While the undivided power of the enemy & his its Savage allies have been directed agt. us & our frontier drenched with the unoffending Blood of unoffending women & Children, The undivided powers of the opposition have been exerted

To destroy all confidence betw between the gpeople and their government,

To misrepresent the former Latter & to decieve distract & Cajole the former.

To deprive the Governmt of the two great Sinues of war—men & money—by preventing enlistments & rendering by discountenancing & calumniating both officers & soldiers.

Defeating the necessary loans by attempting to shake the Confidence of the people in the Stability of the Govermnt.

To render the War odious & unpopular. By

By the most criminal Justification of the conduct of the enemy and the vilest extenuations of the all their enormities.

By exciting insurrection and rebellion in the east by

By seeking to enforce ^exercising^ in each State the same no unworthy means as are practised ^by them^ throughout the union.

For while in this State they profess great solicitude for the <Sate> sufferings of our Citizens on the frontiers, they ^have^ inveterately opposed the raising of ^a^ volunteer Corps for their defence unless with under the disgracefull Stipulation that they shall not annoy the enemy. While also they profess seek to hide the deformity of their ^conduct^ in relation to the Army our army by professing attachment to the naval Service, we find them opposing with disgusting violence a Bill to encourage privateering, which passed the Senate of this State but was negated by the assembly, because it had for its object if ann harass the enemy.

Also which acts & doing are in the best Judgment of the meeting ^But we forbear to <everate> the disgusting enumeration of acts so^ evincive of a deplorable degeneracy of a great portion of the american people, ^so well^ calculated to continue the war into which our Country has been driven, to tarnish our national Character & ^unless with successfully resisted to^ driven our governmt to an Injurious & disgracefull peace.

Therefore, resolved, That while we congratulate our fellow Citizens of on the happy ve revival of the feelings and Sentiments & spirit of the revolution which is every where manifesting itself, on the heart cha and our republican brethren in particular on the heart cheering zeal and unanimity which pervades their ranks, whi which promises the total overthrow of that anti american Spirit which disguised under the specious garb of Federalism has too long preyed on the vitals of the nation & which excites a lively hope that the councils of this great & powerfull state will speedily be wholly rescued from the hands of these who have disgraced them.

They warmly and earnestly conjure their Republican ^Brethren^ by the regard they have for their own rights by the love they bear their Country & by the names of the departed worthyies of the revolution to be up & doing & so to act that at the Termination of the Contest, they ^each of^ you may triumphantly exclaim, "I have fought a good fight I have finished my course I have Kept the Faith." 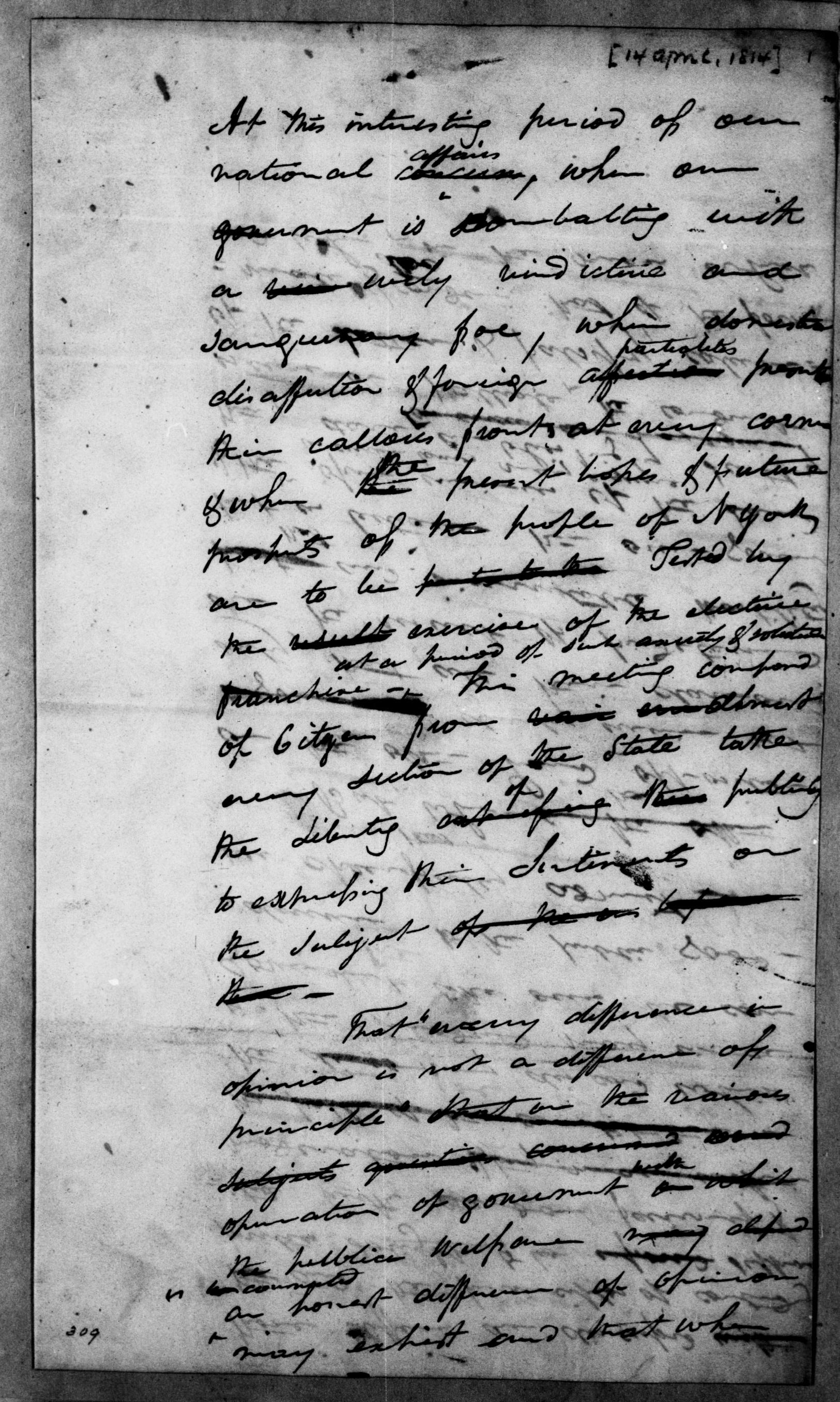 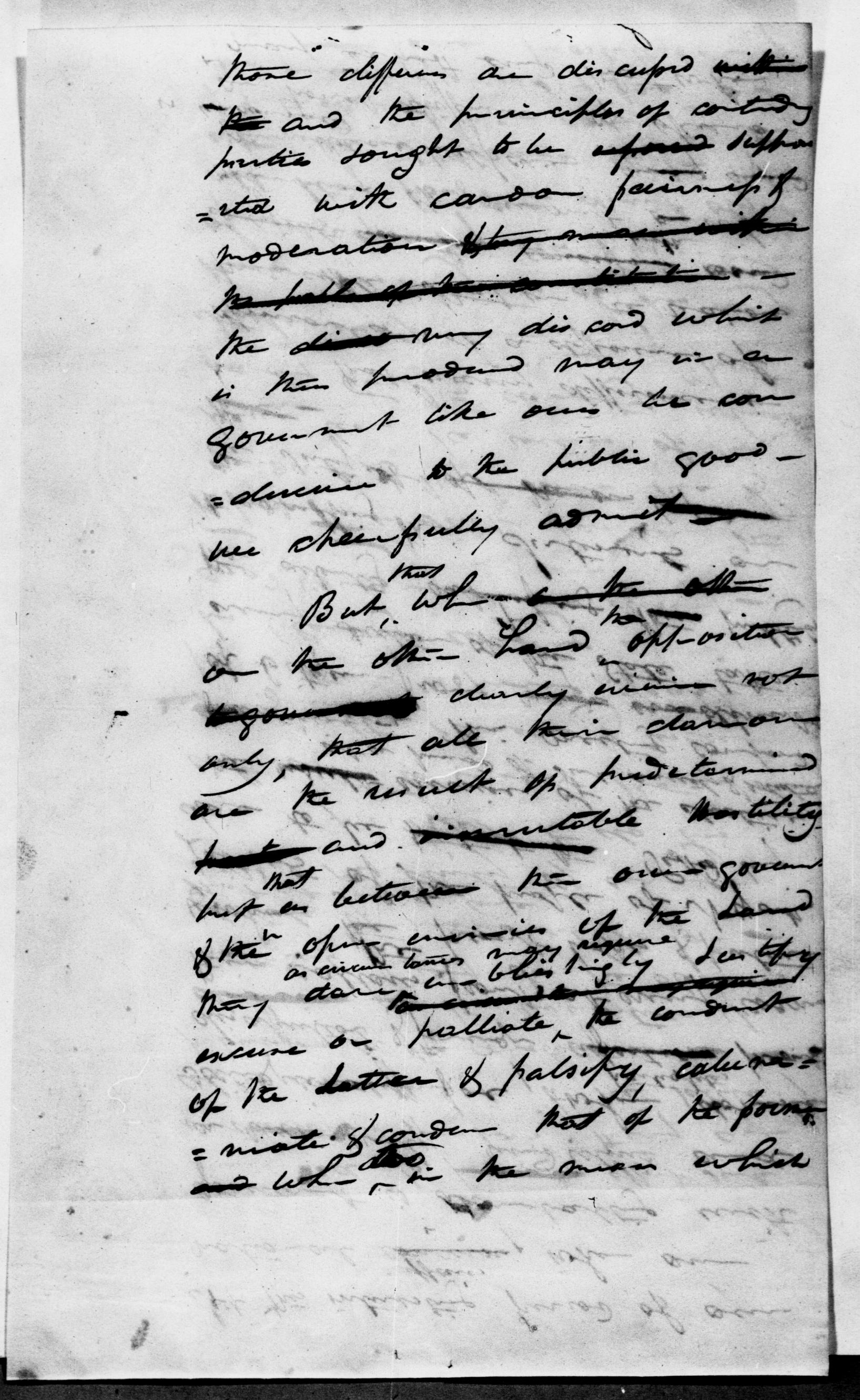 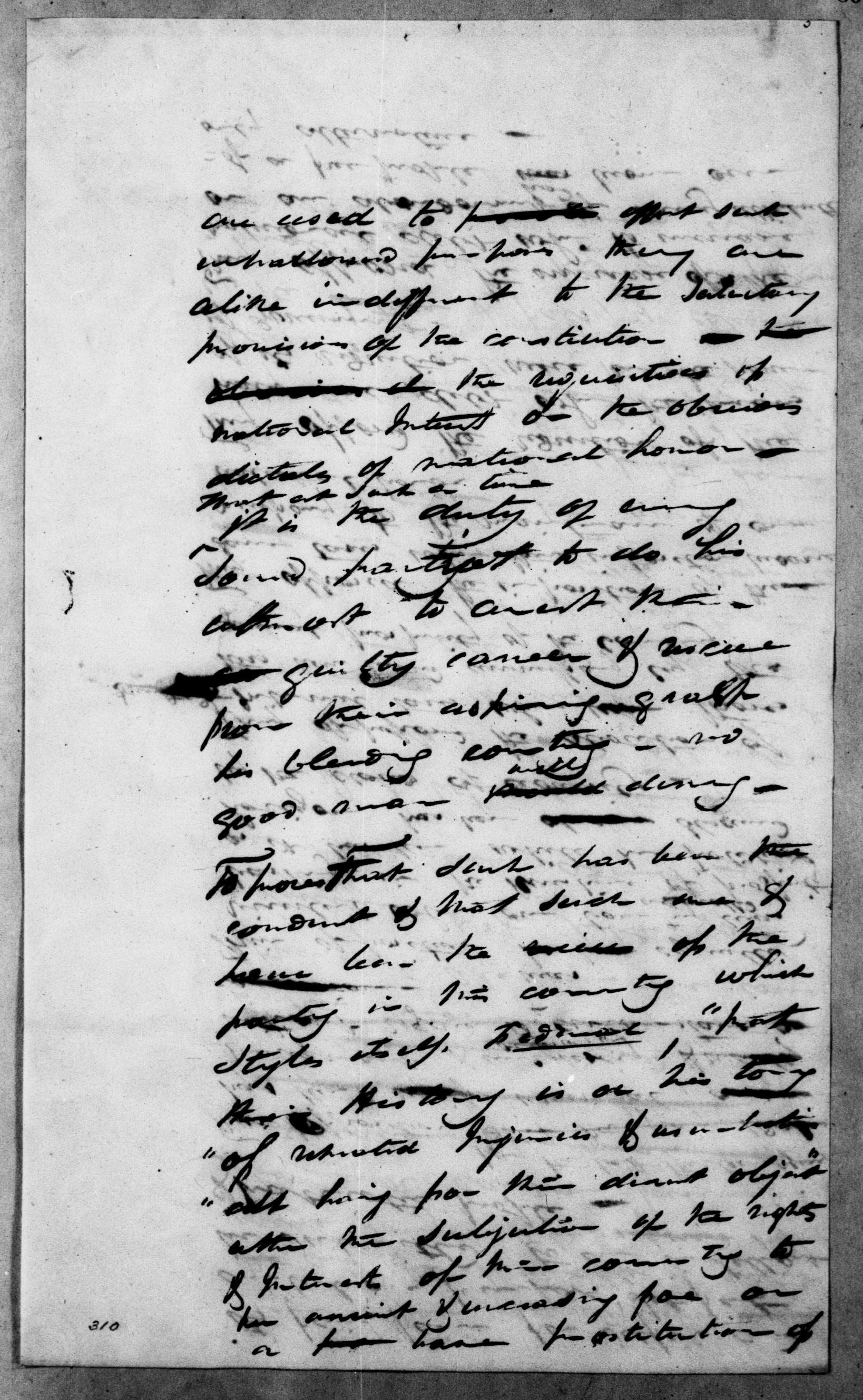 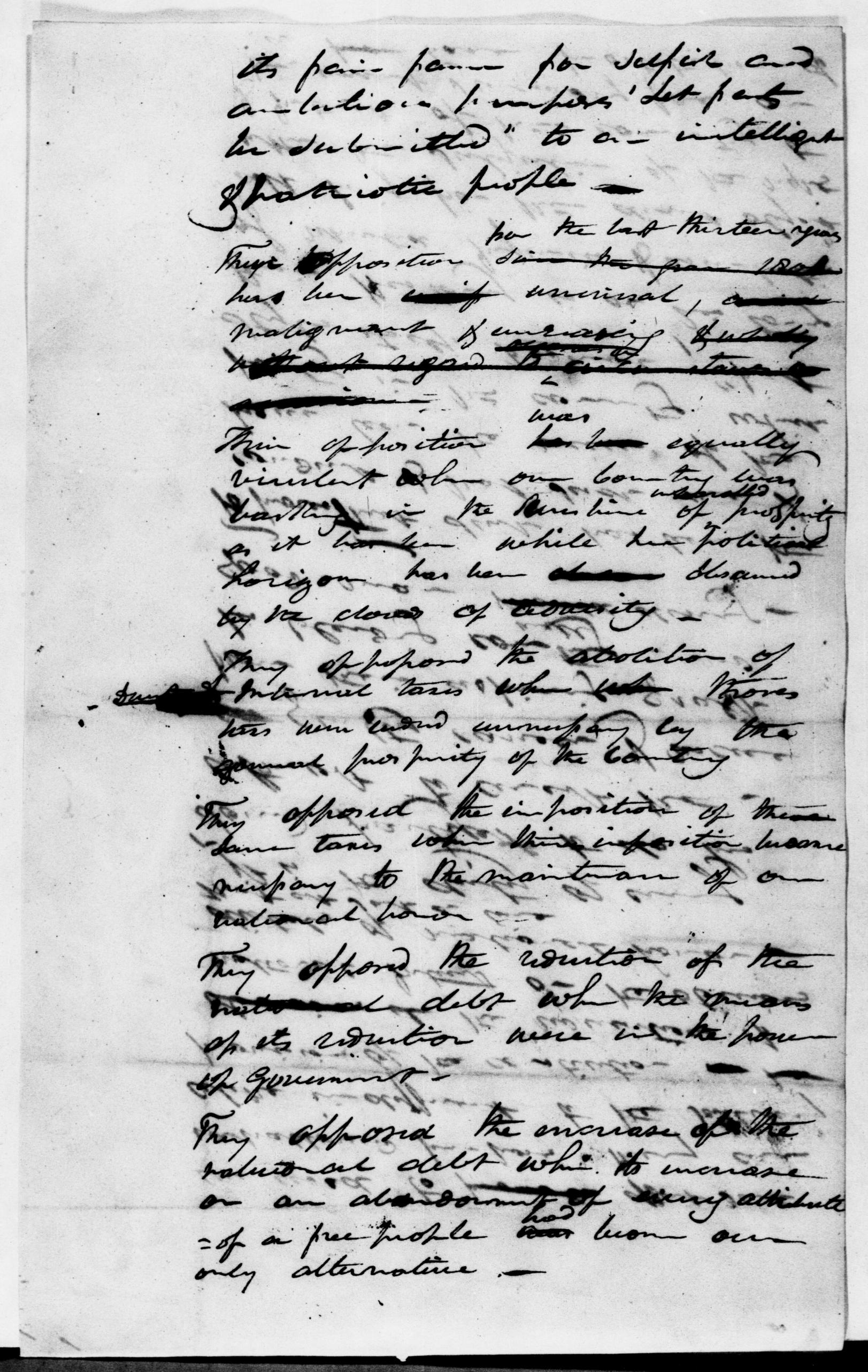 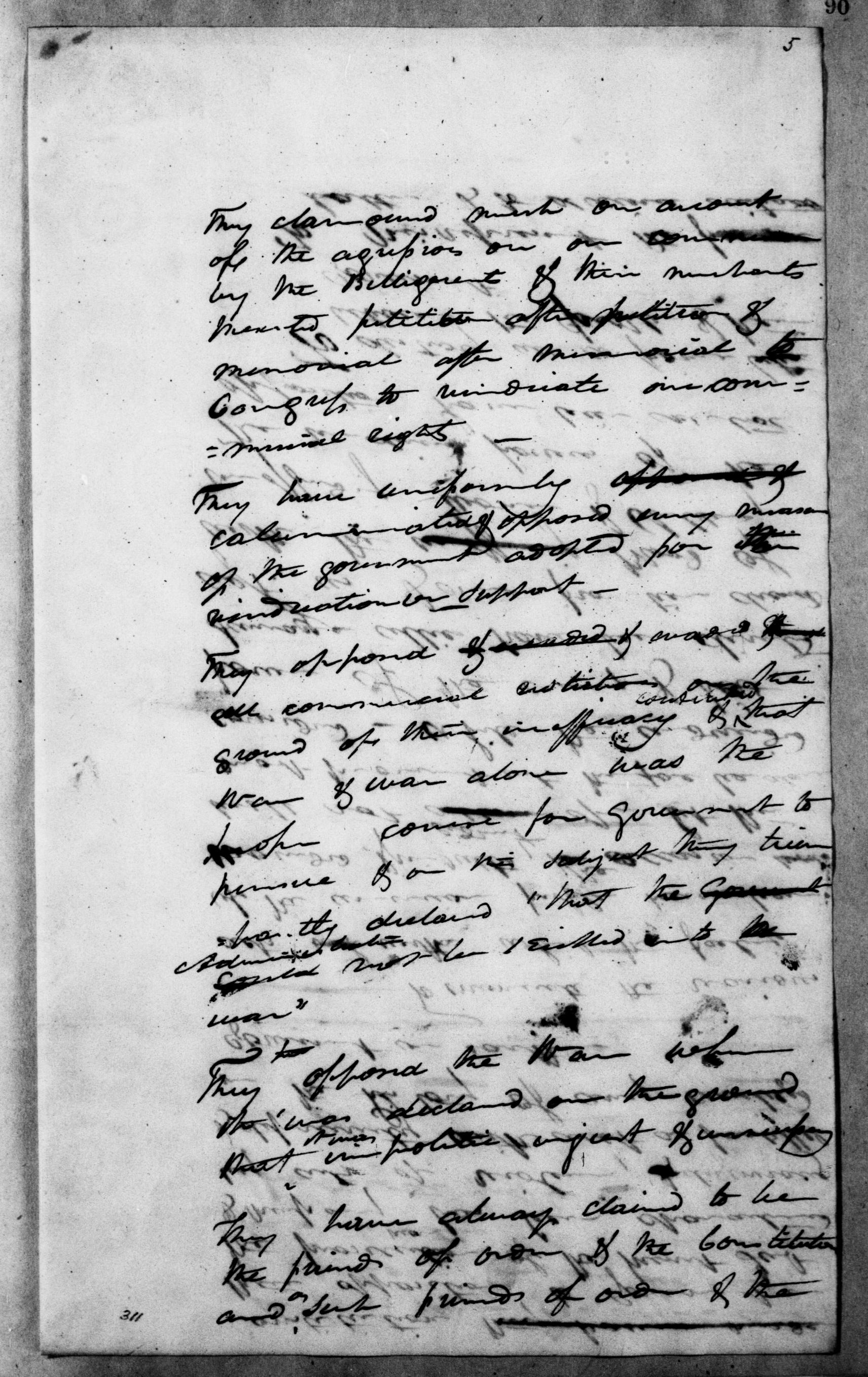 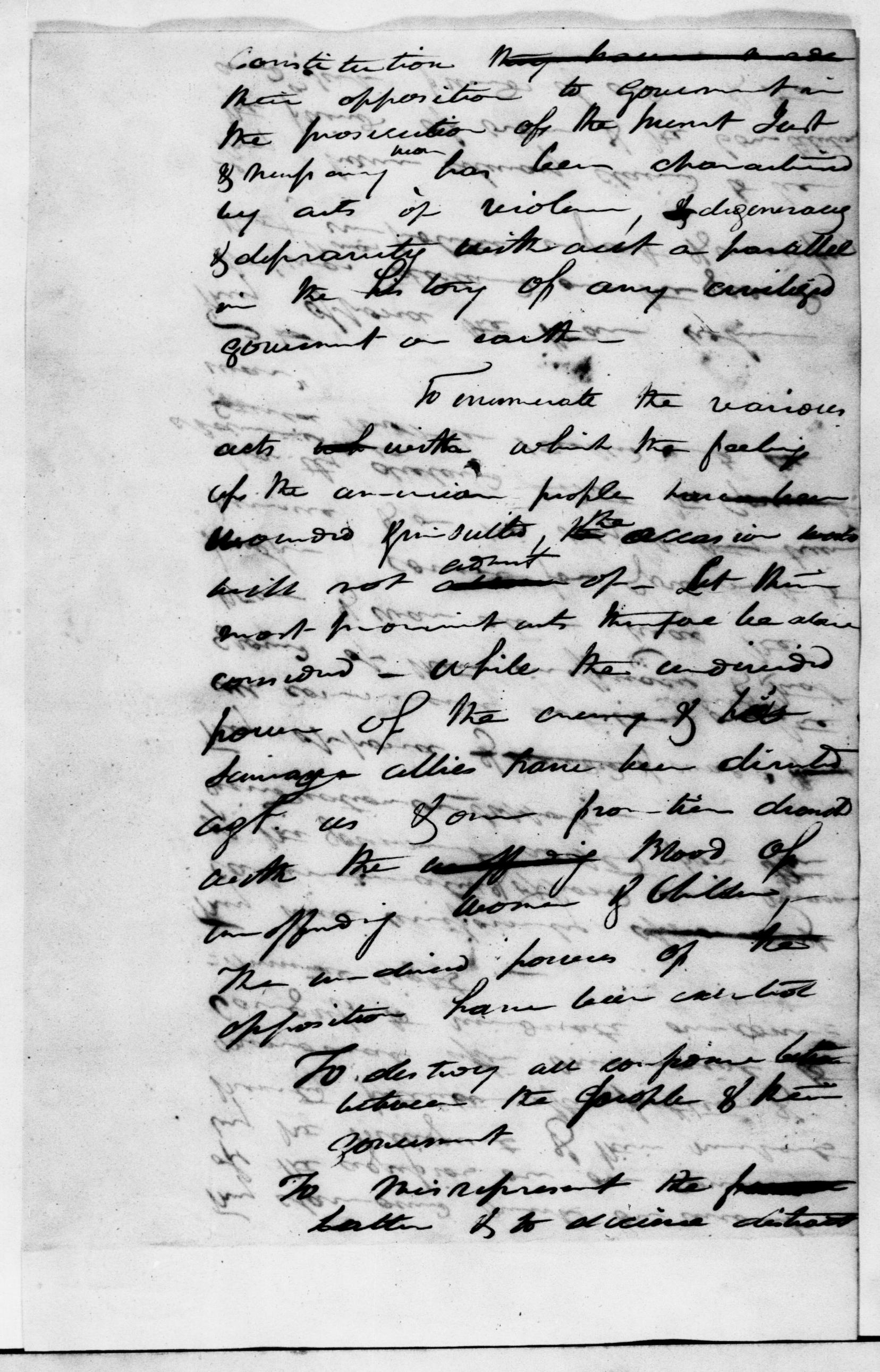 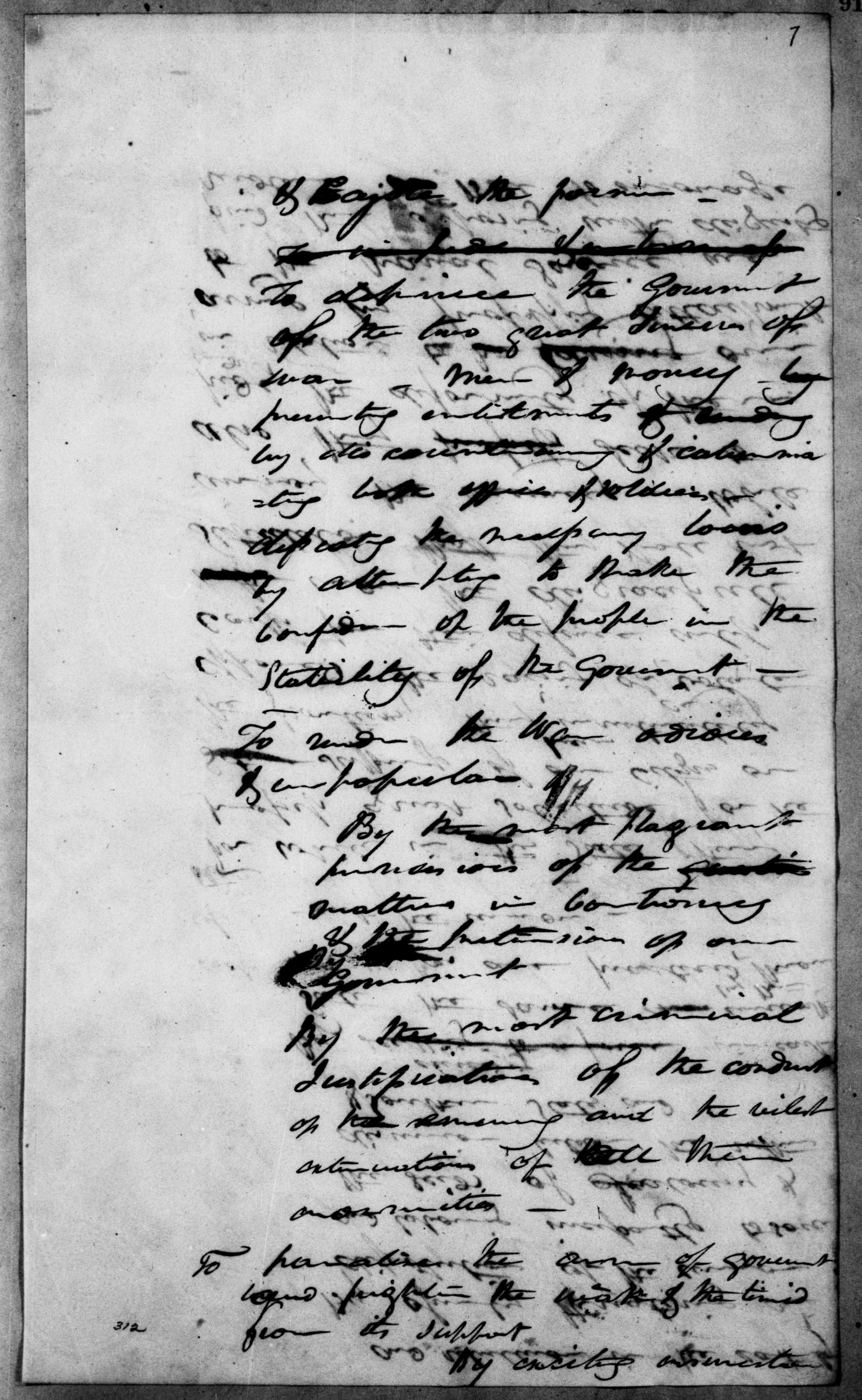 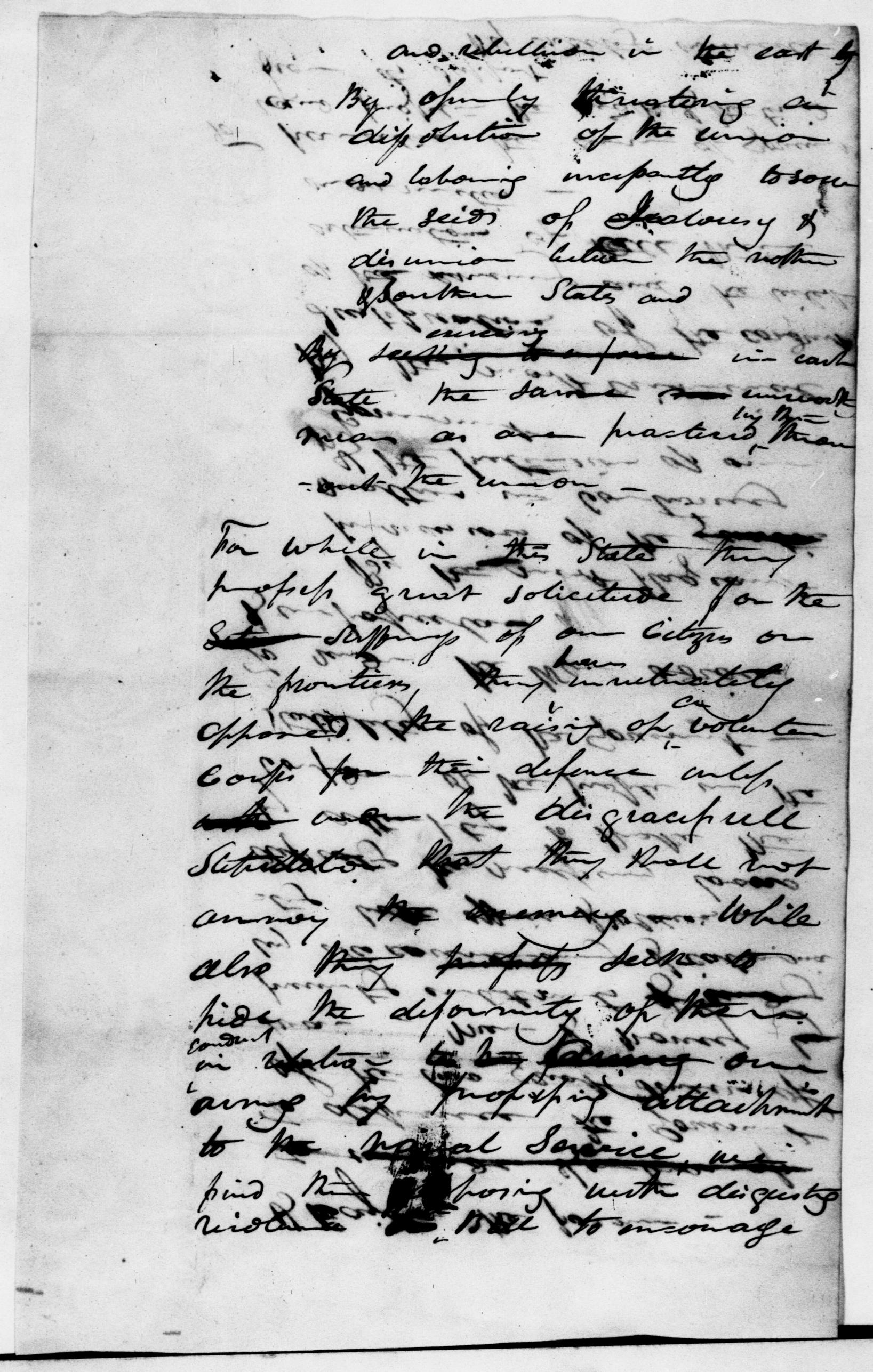 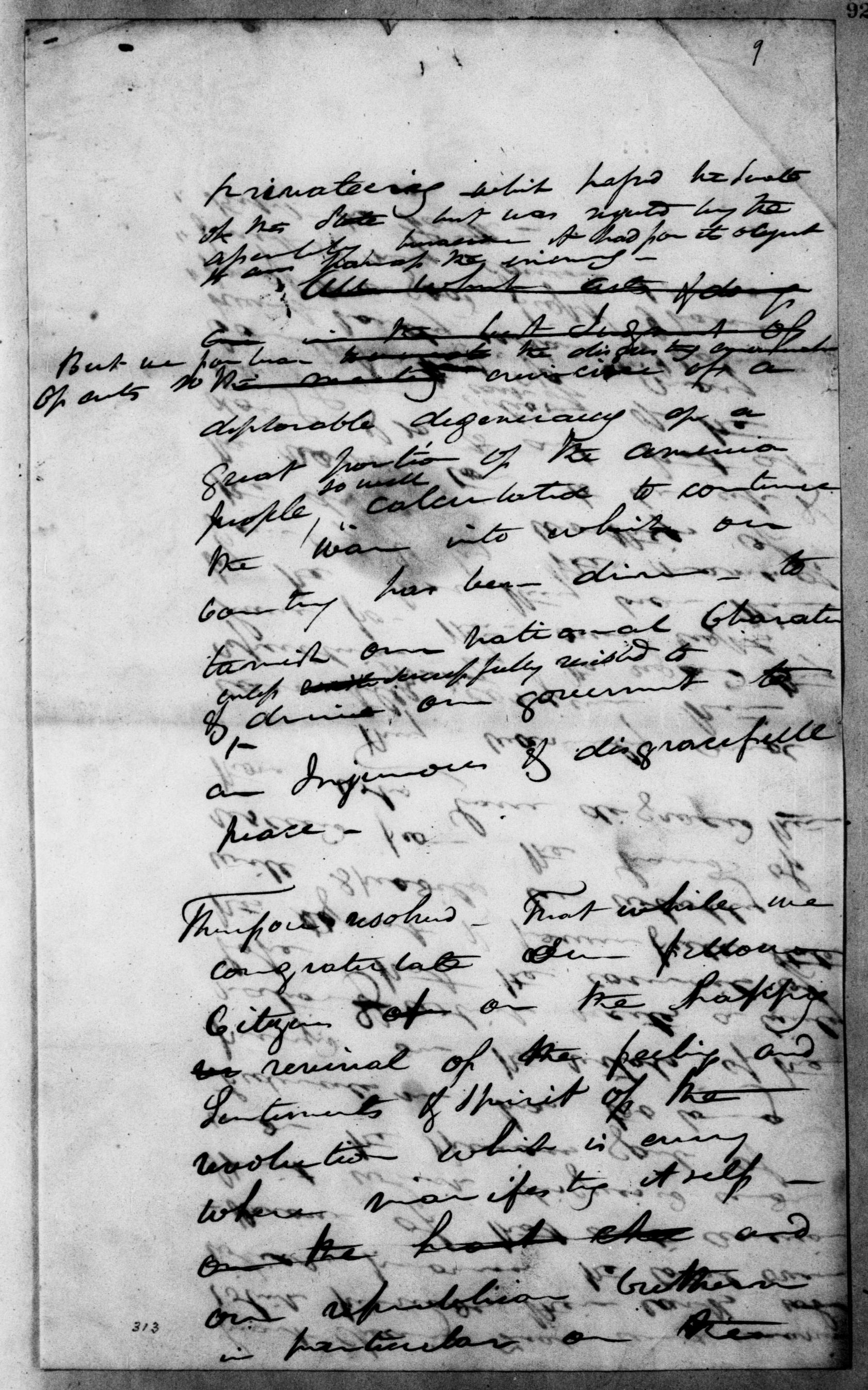 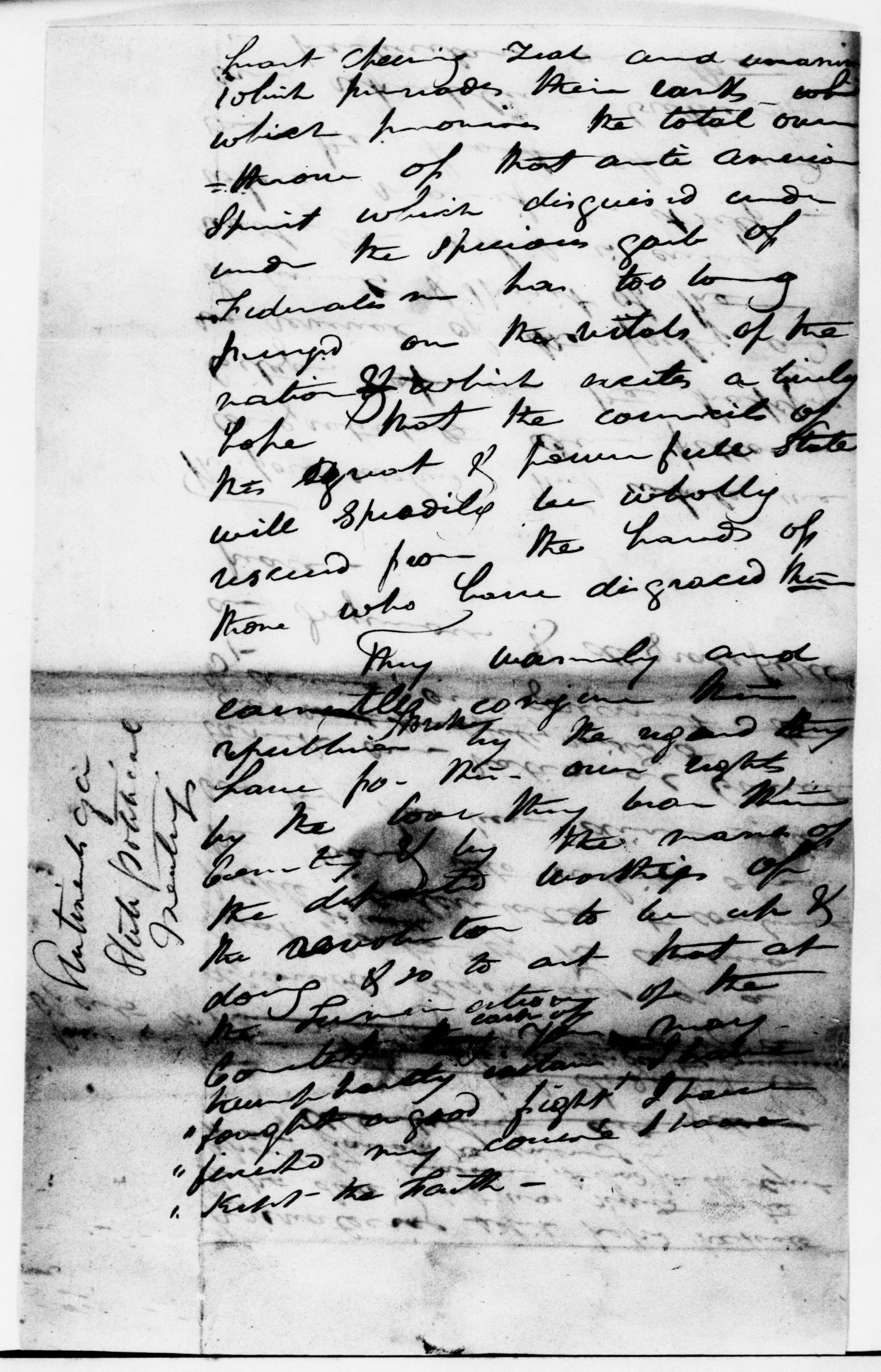