At a very numerous and respectable Meeting of Republican Citizens of Albany, and from different parts of the State held at the Capitol, on the 14th. day of April 1814

Col Daniel Warner of Columbia in the Chair,

The following preamble and resolutions having been read—

Mr Van Beuren rose and addressed the meeting in a handsome style, in a speech of considerable length, in which he portrayed, with the pencil of a master, the views and proceedings of Federalism; as opposed to the liberties independence & union of our country.

At this interesting period of our National Affairs, when our government is combating with a wily, vindictive, and sanguinary foe; when domestic disaffection and foreign partialities present their calous fronts at every corner and when the present hopes and future prospects of the people of New York are to be tested by the exercise of the elective franchise, at a period of such anxiety and solicitude this meeting composed of citizens from almost every section of the State take the liberty of publicly expressing their sentiments on the subject.

But that when on the other hand, the opposition clearly evince, that all their clamours are the result of predetermined and immutable hostility that, as between their own government and the open enemies of the land, they dare, as circumstances may require, unblushingly justify excuse or palliate the conduct of the latter and falsify, calumniate and condemn that of the former; when too in the means which are used to effect such unhallowed purposes, they are alike indifferent to the salutary provisions of the constitution, to the requisitions of national interest, or the obvious dictates of national honor—that at such a time it is the duty of every sound patriot, to do his utmost to arrest their guilty career, and to rescue from their aspiring grasp his bleeding country—no good man will deny.

To prove that such has been the conduct, and that such are and have been the views of the party in this country which styles itself Federal—that their "history is a history of repeated injuries and usurpations all having for their object," either the subjection of the rights and interests of their Country to her ancient and unceasing foe, or a base prostitution of its fair fame for selfish and ambitious purposes "let facts be submitted to an intelligent and patriotic people."

Their opposition for the last thirteen years, has been universal, malignant and unceasing:

Their opposition was eaqully virulent when our country was basking in the sunshine of unparalleled prosperity, as it has been while her political horizon has been obscured by the clouds of adversity:

They clamored much on account of the aggressions on our commerce by the belligerents, and their merchants presented petition after petition, and memorial after memorial, to congress, that they should vindicate our commercial rights:

They have uniformly calumniated and opposed every measure of the government adopted for their vindication or support:

They opposed all commercial restrictions on the ground of their ineffiencycacy, and that war, and war alone was the proper course for government to pursue, and on this subject they triumphantly declared "that the administration could not be Kicked into a war:"

They opposed the war when it was declared on the ground that it was impolitic, unjust, and unnecessary:

They have always claimed to be the friends of order and the constitution, and as such friends of order and the constitution, their opposition to government, in the prosecution of the present just, and necessary war, has been characterized by acts of violence, degeneracy and depravity without a parallel in the history of any civilized government on earth.

To enumerate the various acts with which the feelings of the american people have been wounded and insulted, the occasion will not admit of: Let their most prominent acts therefore, be alone considered. While the combined power of the enemy and his savage allies has been directed against us, and our frontiers drenched with blood of unoffending women and children, the undived powers of the opposition have been exerted—

To destroy and all confidence between the people and their government,

To misrepresent the latter, and to deceive, distract and cajole the former,

To deprive the government of the two great sinues of war—men and money:— preventing enlistments by discountenancing and calumniating both officers and soldiers,

Defeating the necessary loans, by attempting to shake the confidence of the people in the stability of the government:

To render the war odious and unpopular,

By the most flagrant perversions of the matters in controversy, and the pretensions of our government;

By the most criminal justification of the conduct of the enemy and the vilest extenuation of all their enormities;

To paralise the arm government and frighten the weak and timid from its support,

By exciting insurrection and rebellion in the east;

By openly threatening a dissolution of the union, and laboring incessantly to sow the seeds of jealousl Jealousy and disunion between the northern and southern states; and

By exercising in each state the same unworthy means as are practised by them throughout the union.

For while in this State they profess great solicitude for the sufferings of our citizens on the frontiers, they have inveterately opposed the raising a volunteer corps for their defence unless under the disgraceful stipulation, that they shall not annoy the enemy. While also they seek to hide the deformity of their conduct in relation to our army, by professing attachment to the naval service; we find them opposing, with disgusting violence, a bill to encourage privateering, which passed the Senate of this State, but was negatived by the Assembly, because it had for his its object to harass the enemy.

But we forbear the disgusting enumeration of acts so evincive of a deplorable degeneracy of a great portion of the american people, so well calculated to continue the war into which our country has been driven—to tarnish our national character and (unless successfully resisted) to drive our government to an injurious and disgraceful peace

Therefore Resolved, That while we congratulate our fellow citizens on the happy revival of the feelings, sentiments, and spirit of the revolution which is every where manifesting itself; and our republican brethren in particular, on the heart cheering zeal and unanimity which pervades their ranks which promises the total overthrow of that anti american spirit which disguised under the specious garb of Federalism, has too long preyed upon the vitals of the nation—which excites a lively hope that the councils of this great and powerful state will speedily be wholly rescued from the hands of those who have disgraced them.

We warmly and earnestly conjure our Republican brethren, by the regard they have for their own rights; by the love they bear their country, and by the names of the departed worthies of the revolution, to be up and doing, and so to act that at the termination of the contest, each of them may triumphantly exclaim, "I have fought a good fight, I have finished my course, I have Kept the faith." 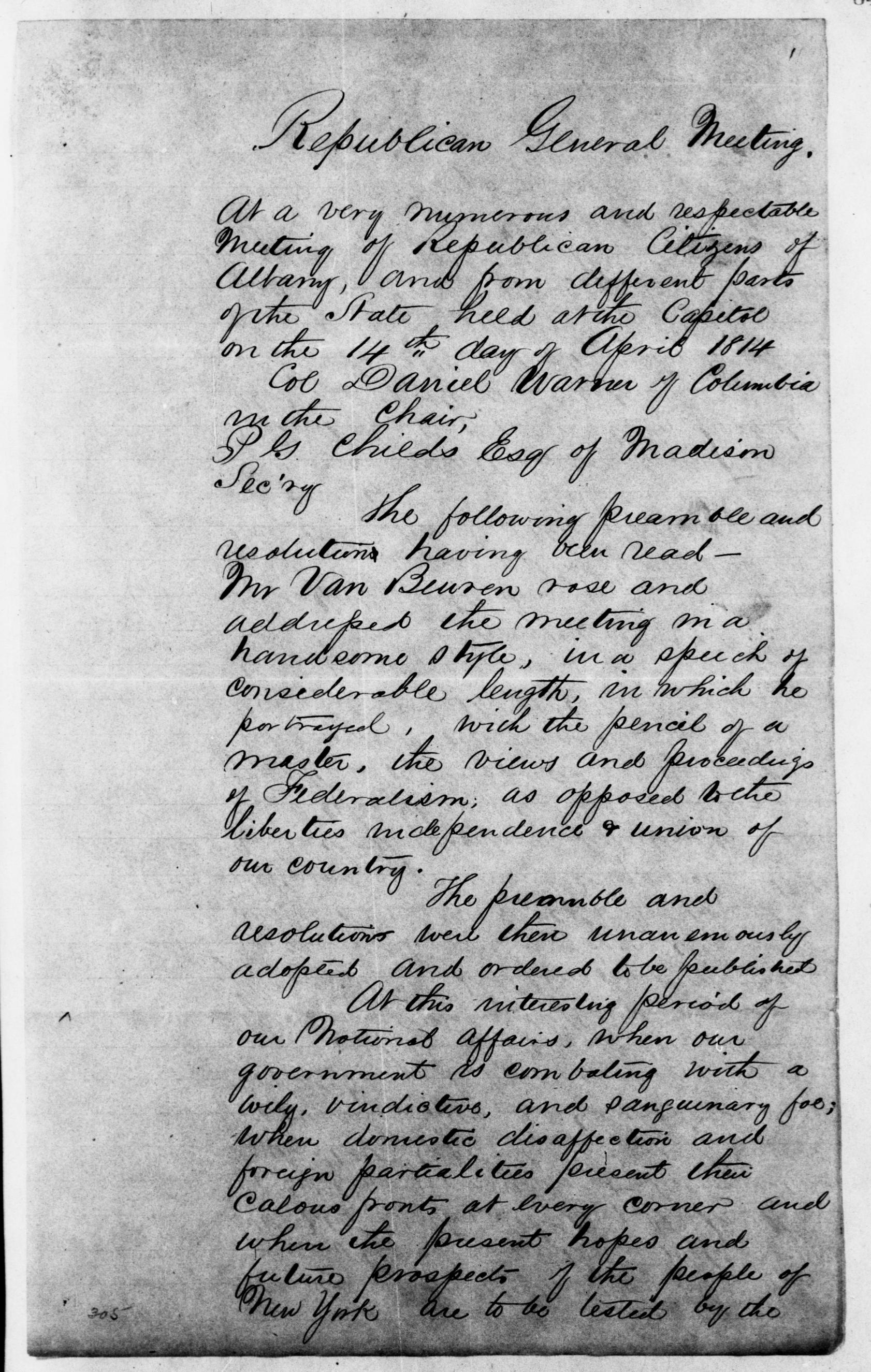 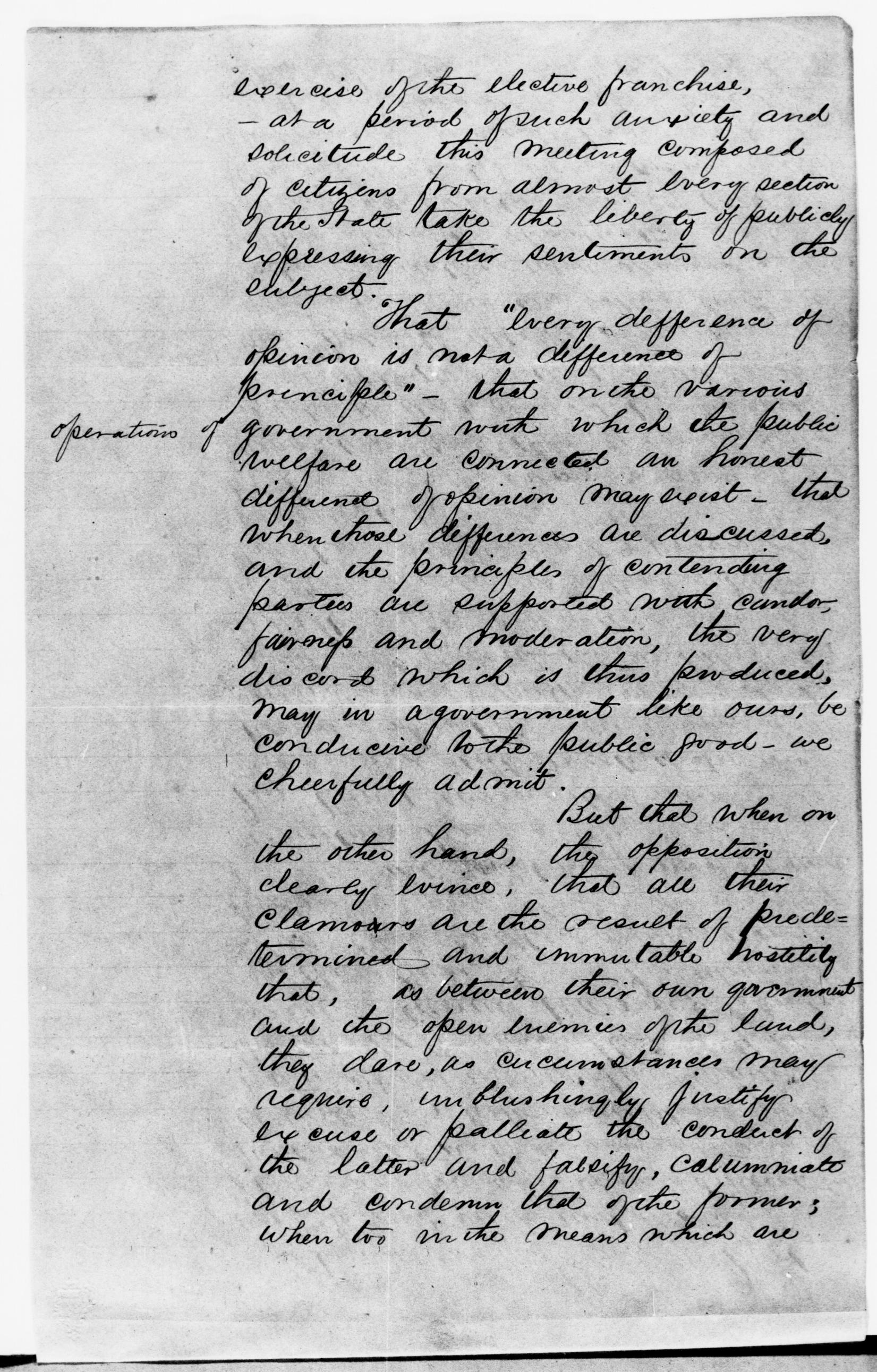 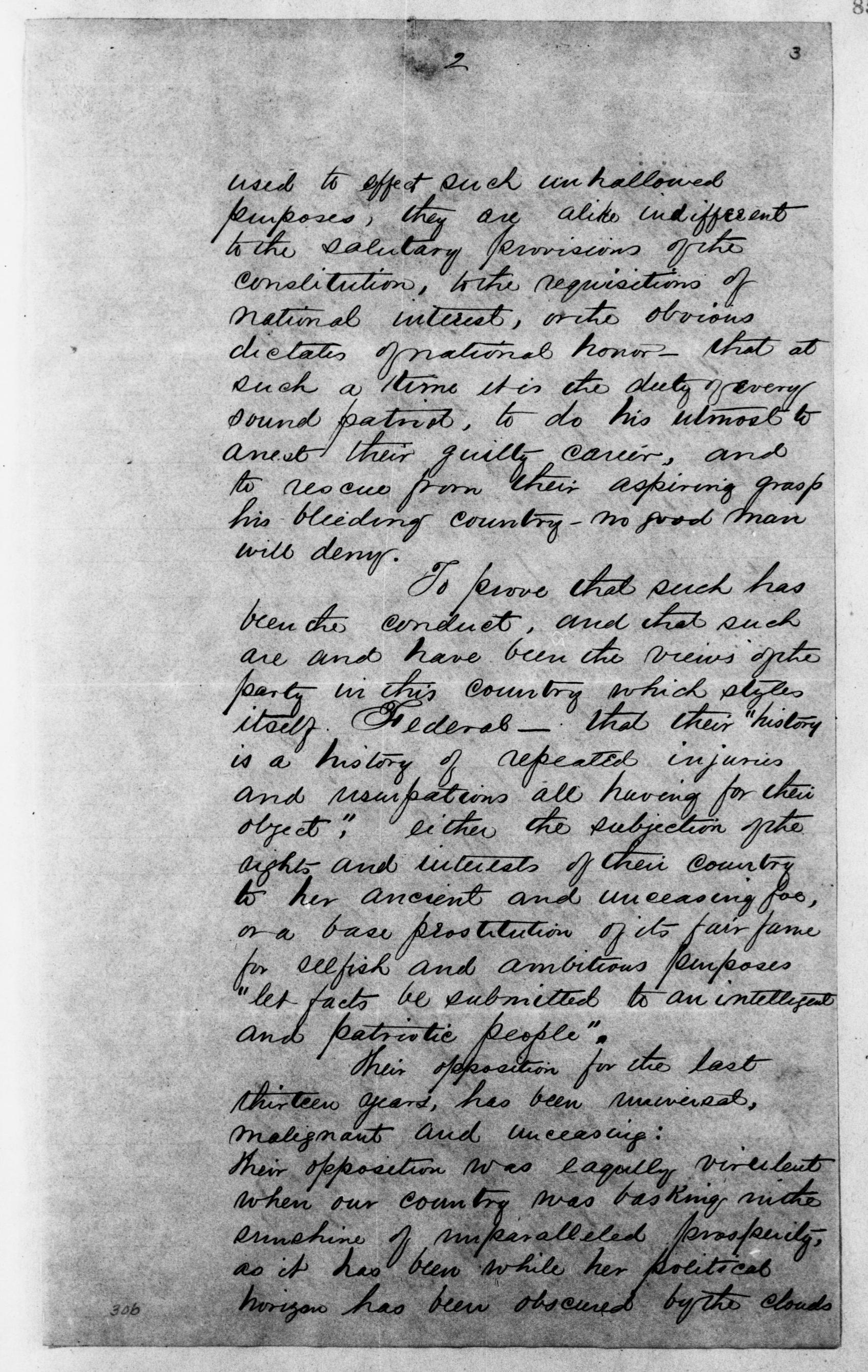 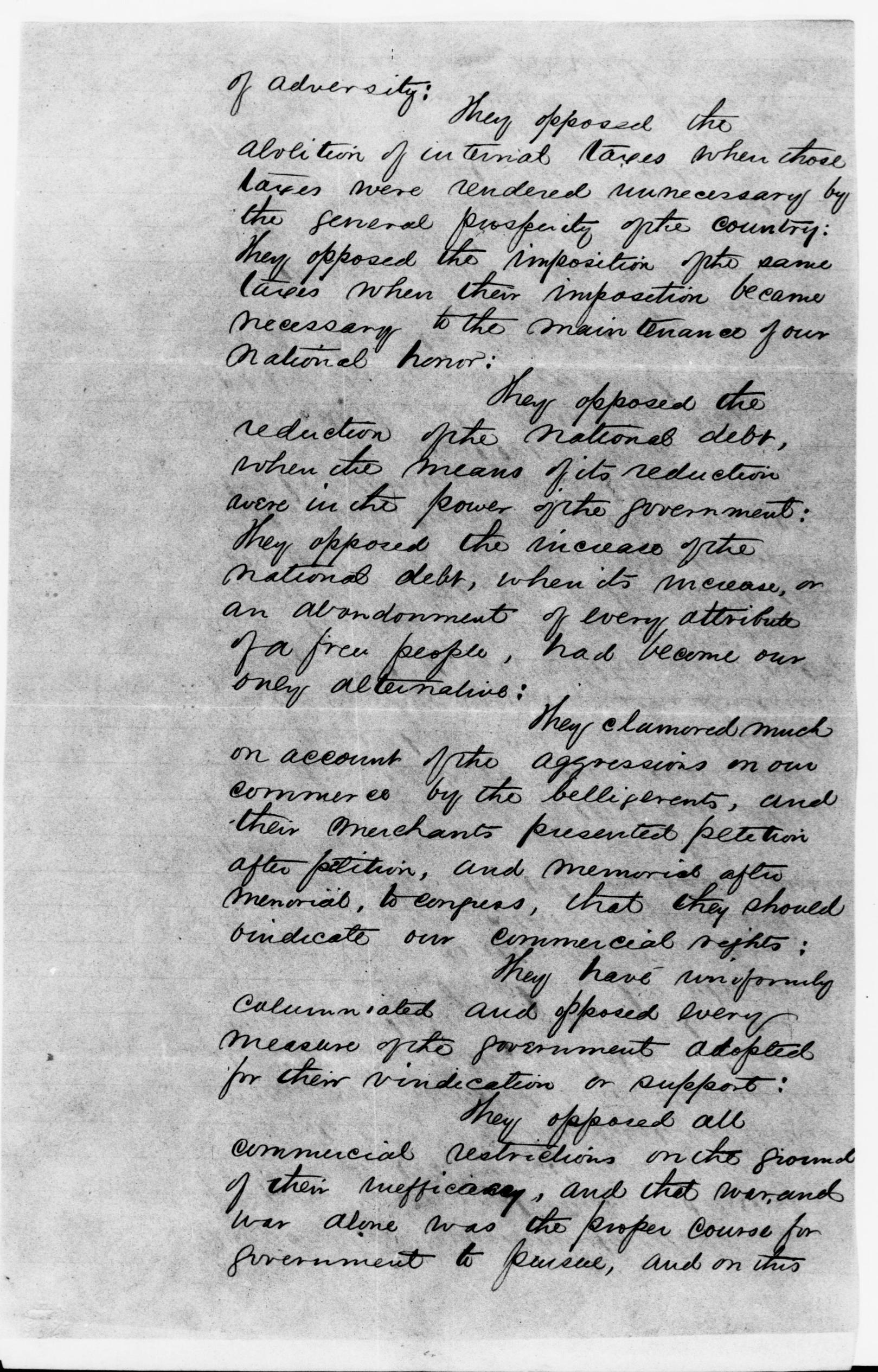 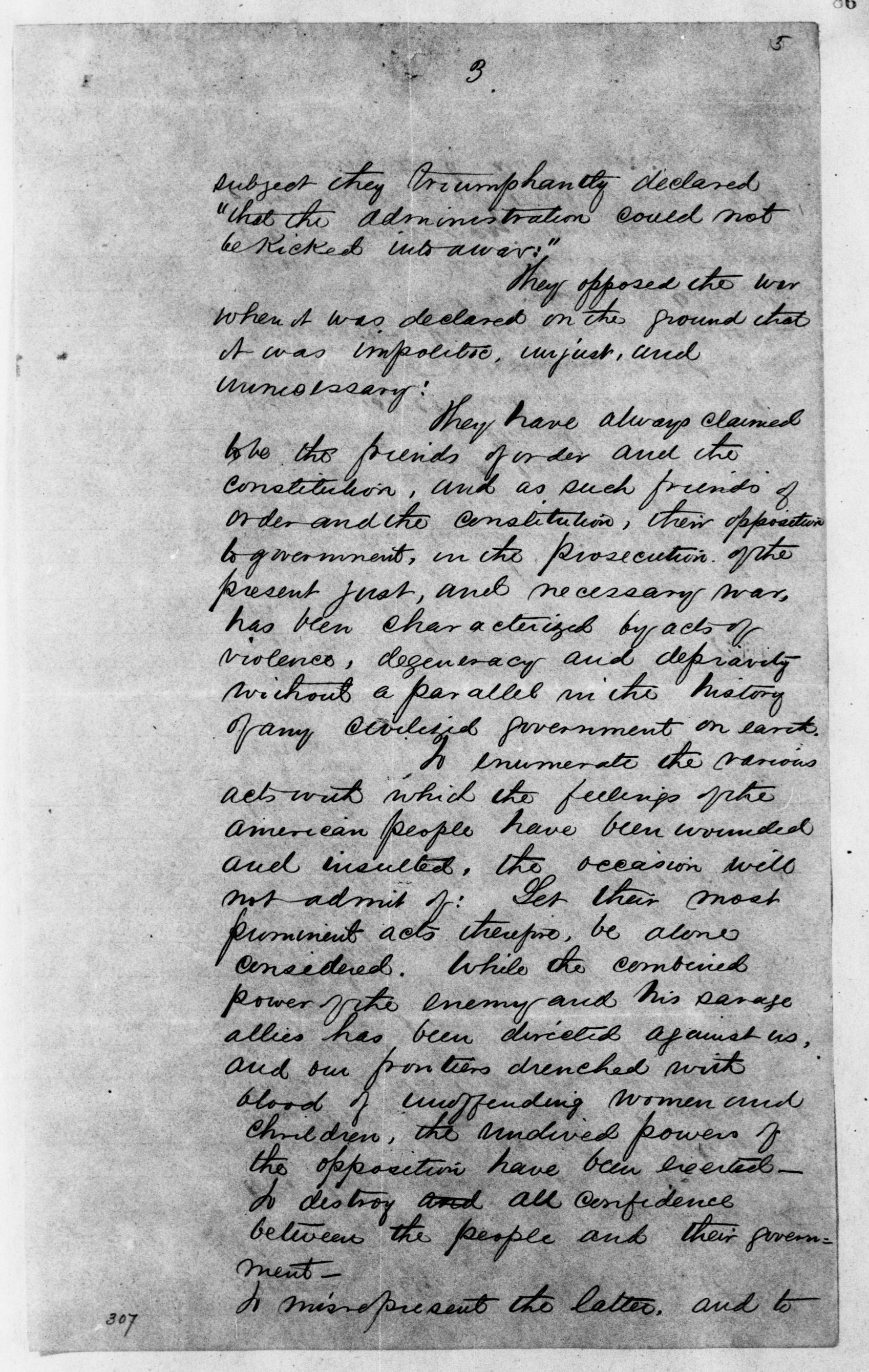 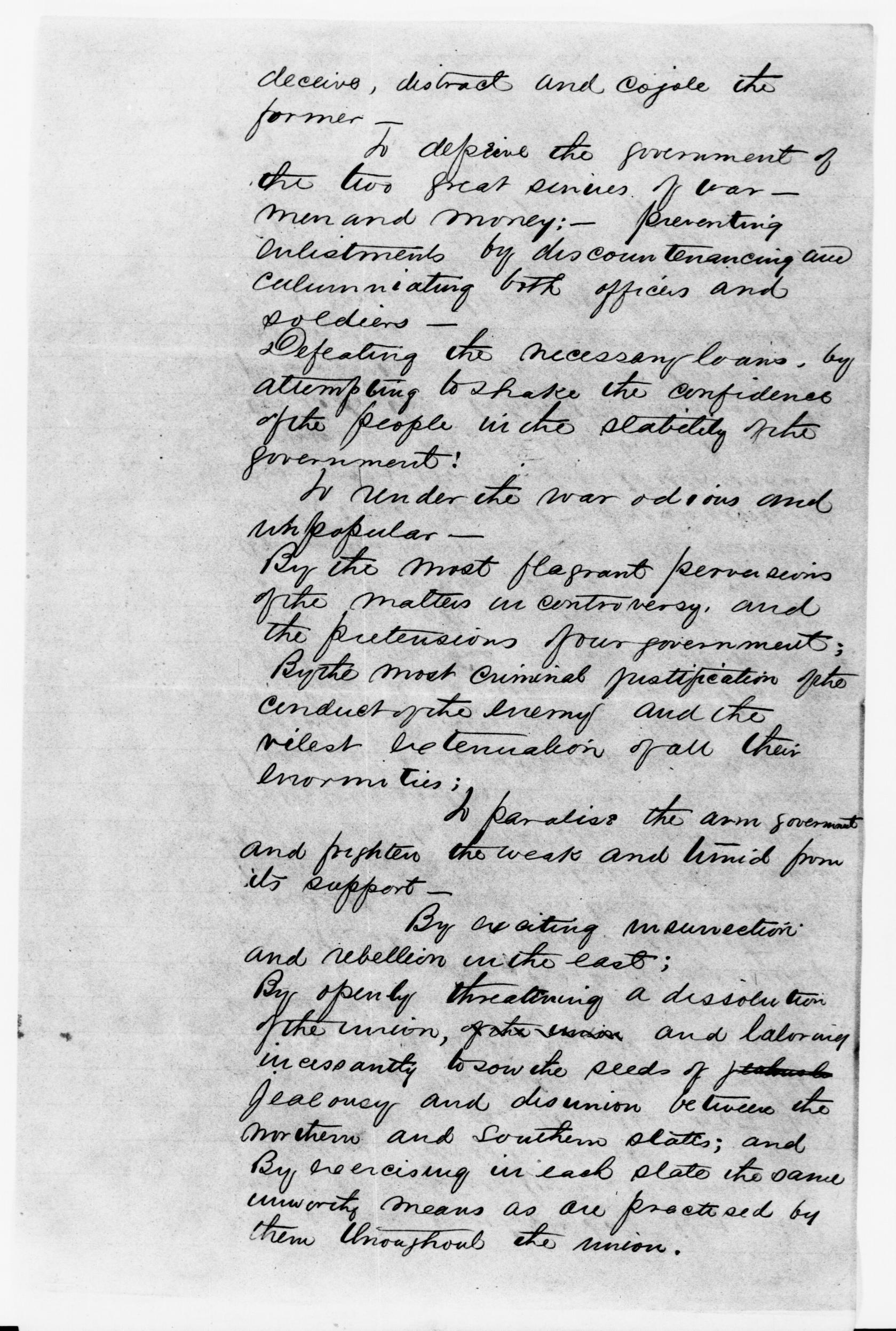 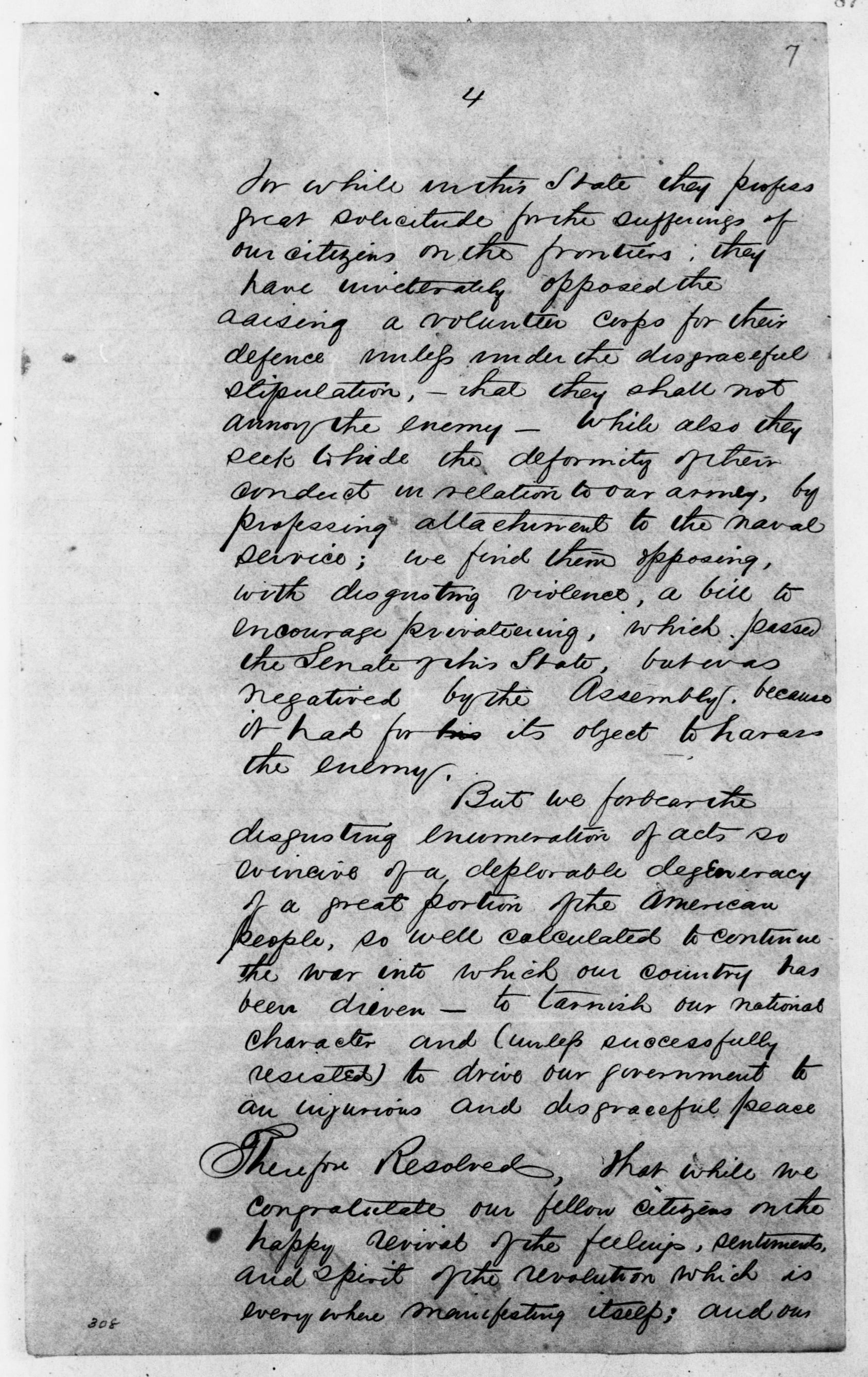 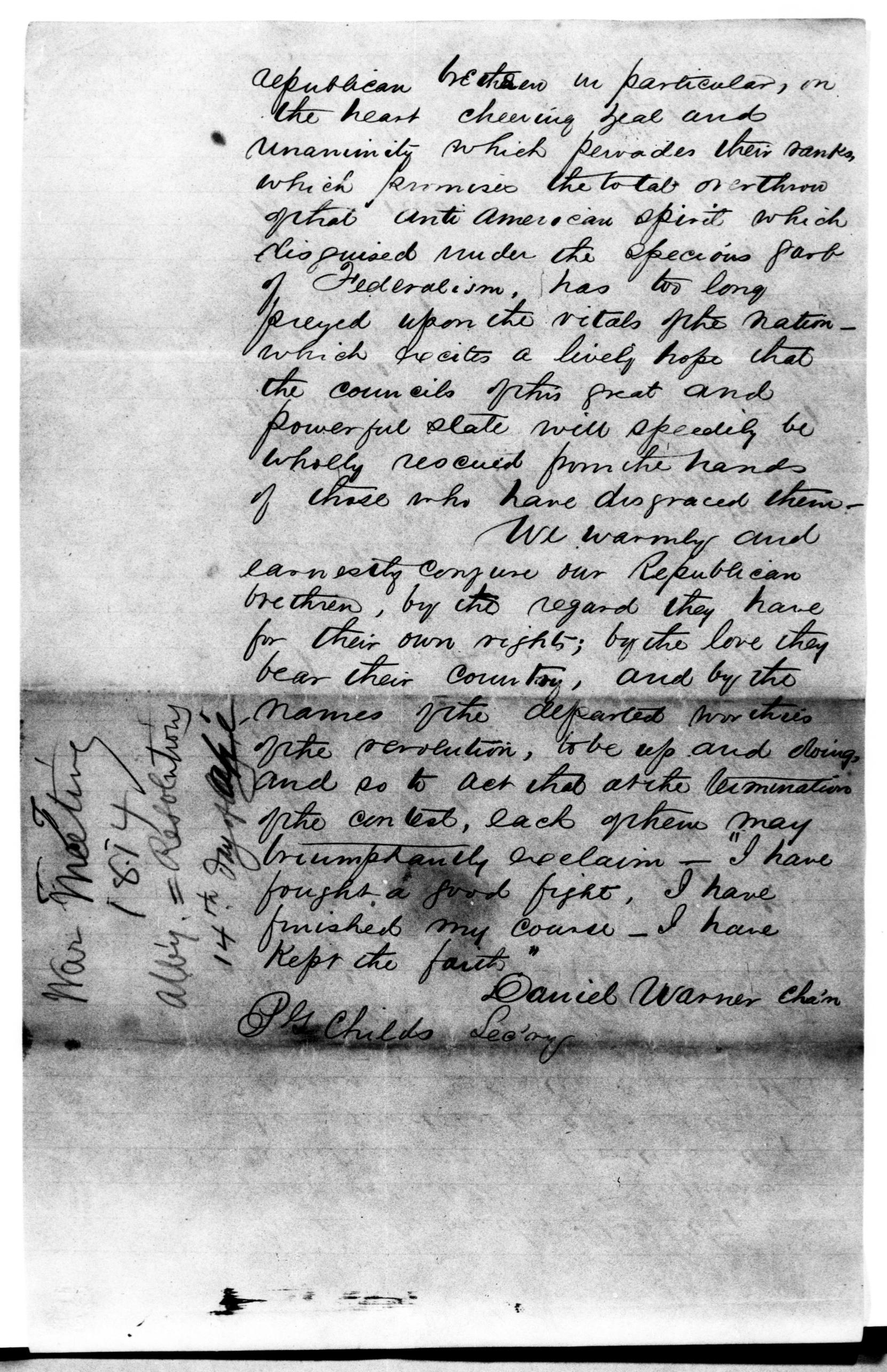