The Erection of the enemies Batteries & omitting to anoy them

4th. The Reason for the <Swap>

Capt. Dalliby — The practiability of <illegible> <to> <The> <expected> it, asserted on the 5th. application for <illegible> on the 14th. referred & the reason assignd.

Captn Snelling — night of [. . .]5. practicability of <illegible> Queen Charlott. No order given or by <illegible> the enemy even <crossing>

Major Jessup — Refer to his Testimony on the <board>.

Captn Dyson — if the Cannonade had continued constantly the ammunition at Detroit might have lasted three or four days.

Major Trimble — On the 13th of August Genl Hull said there was about a months supply of provisions & agreed that the country afforded supplies for 2 months.

IIId. The enemies force at Detroit

3d. The manner of the Surrender

Captn Fuller — When the British officers rode up to the fort, Genl said, “Gentlemen I shall surrender I wish you to go to the Markee in the field where I will come or send to you.

Captn. Eastman — While in Dysons room, Hull applyed for protection for the Canadians. McDonnald said it was inadmissible. “Well” said the Genl. “I shall surrender”.

Col. Miller — As I approached the markee Genl. Hull was standing with his Back to me I heard him say to McDonnald, “I will surrender”

4th. The troops crowded into the fort before the Capitulation & the enemies troops suffered to end

Col. VHorne — The whole force had marched in before they retired to Dysons quarters

Captn. Burton — While they were settling the articles 150 grenadiers in the fort & the enemy play their <illegible>

Captn Fuller — When I returned from the markee I found the american Troops in the fort their arms stacked & in great confusion.

Explain how far this is contradicted by Col Miller he says they were so crowded together that they could not act.

"The American force in Canada & at Detroit.

Major Jessup — Early in August or the last of July, they had a disposable force of 1800 men ^in Canada^ to <lead> agt. Malden & the Michigan militia to Defend Detroit.

Captn Snelling — Read his testimony, “are they coming

Captn McCorm — I never saw a man so <frail> frightened

Col. VHorne — “His whole appearance impressed me with a conviction that he was under the Influence of fear & I had no Doubt of it at the time & mentioned it to my Brother Officers. “We were all fatigued but on Comparing Countenances with other officers there was an evident Differnc.

Captn Baker – Had been long acquainted with Gen Hull. Saw him frequently in the course of the morning of the 16th. he appeared to be embarrassed. Cannot say precisely what his feelings were but has had but one opinion on the subject & that was that he was under the influence of personal fear.

Major Jessup — On an retiring from Spring Wells, the canonading commenced, we found Genl Hull in the Street on Horse-back near the Carter Battery & either McDugan or myself observed that we must c the Genl. was frightened & we must cheer him up, we approached him spoke to him he appeared to be very much confused, was pale dismounted his horse & led him off towards the fort again after he saw the white flag & he was our line broke he went to the fort & says “I found Genl. Hull in the fort I thought him <illegible> very much frightened, when I met him I asked him whether it was possible we were about to surrender, he mentioned something about the enemies force which I cannot now recollect & said some thing about terms, his voice at this time was tremulous, I observed to him that we could at least hold out till we were joined by Cass & McArthur, he exclaimed "my god what shall I do with these women & children. I left him then went to Col Findly told him all was lost &c & requested to him to endeavor to save us, again."

Captn Fuller — I saw Genl. Hull frequently on the morning of the 16th. & Judged at the time from his appearance & Conduct that he was frightened, & after saying some thing about his Dullness the following question was put to him, “Had you at the time or have you now any Doubt but that the Genl. was under the influence of personal fear”

Answer “I had none then nor have I now.

Capt. Eastman — “I saw Genl. Hull on the Evening of the 15th. when a Shell was sent from the enemy which It was apprehended would strike the fort near from the place he was standing to the fort as it appeared to me with a view of going under the Platform whether that was his intention or whether he went under I do not know his whole conduct on the evening of the 15th. & morning of the 16th was such as to impress me with a conviction that he was under the influence of personal fear, & I so expressed it at the time”

Major Munson — About the Horror of an Indian Massacre.

Lieut. Philips — Saw Genl. Hull on the morning of the 16th. Did not hear Genl. Hull say much but saw him sitting on the ground with one Lady & one Gentleman near him with his Back towards the parapet, he appeared to be very much agitated & I then supposed he was under the influence of personal fear & that is my opinion now.

Col. Miller — on the morning of the 16th Genl. Hull appeared to be much agitated, whether it proceeded from personal alarm or from his anxiety on account of the responsibility of his Situation I cannot say nor do I know that I formed any decided opinion at the time. After the Surrender Genl. Hull told me he was apprehensive that if we were defeated the enemy would take advantage of that clause in his proclamation which said that no man fighting beside an Indian would be taken Prisoner.

And on being asked by Genl Hull

“Can you mention any acts of mine which you did at that time or do now impute to Cowardice or personal fear?

To which he answered “Yes, such an immediate Surrender I think it was indicative of a want of Courage."

Genl. Taylor — Saw Genl. Hull several times on the 15th. during the Cannonade & his conduct

On the 16th. of August Genl. Hull appeared very pensive & very low spirited, he did nothing towards cheering up the men & keeping up their Spirits. His countenance was dull & his whole conduct made an Impression on Witnesses mind that he was not as firm as he ought to be.

His position was very near the gate way & towards that part of the fort that was least exposed. While Witness was with him he was informed that the British were preparing to Cross, he gave no orders to have them met Witness was led to notice his appearance the Tobacco Spittle was rubbed over his face. Witnesses impression was that he was under the Influence of personal fear.

Major Whistler — Saw the Genl. frequently on the morning of the 16th. & in my opinion he was under the Influence of personal fear.

Evidence on the part of Genl Hull

Liut. Bacon “I know not the cause but Genl Hull appeared to be agitated more than usual on the morning of the 16th. I had no suspicion that he was under the Influence of personal fear nor did any expressed at the time by any of the officers."

Tho[ms]on Maxwell — Saw Genl Hull at one of the Batteries during the Canonade of the 15th. & he appeared firm & collected observed him particularly on account of some clamour he had heard.

Lieut Peckham — Says he heard Genl. Hull say “are they coming” Frequently saw Genl. Hull on the 16th. during the Canonade he appeared to be much agitated & the impression made upon my mind at the time was that he was under the influence of personal fear, he sat still & gave no order to my knowledge.

Mr Watson on the morning of the 16th. before the Cannonading commencd, 4 o’Clock in the morning & ap he appeared to be sufficiently tranquil & collected. 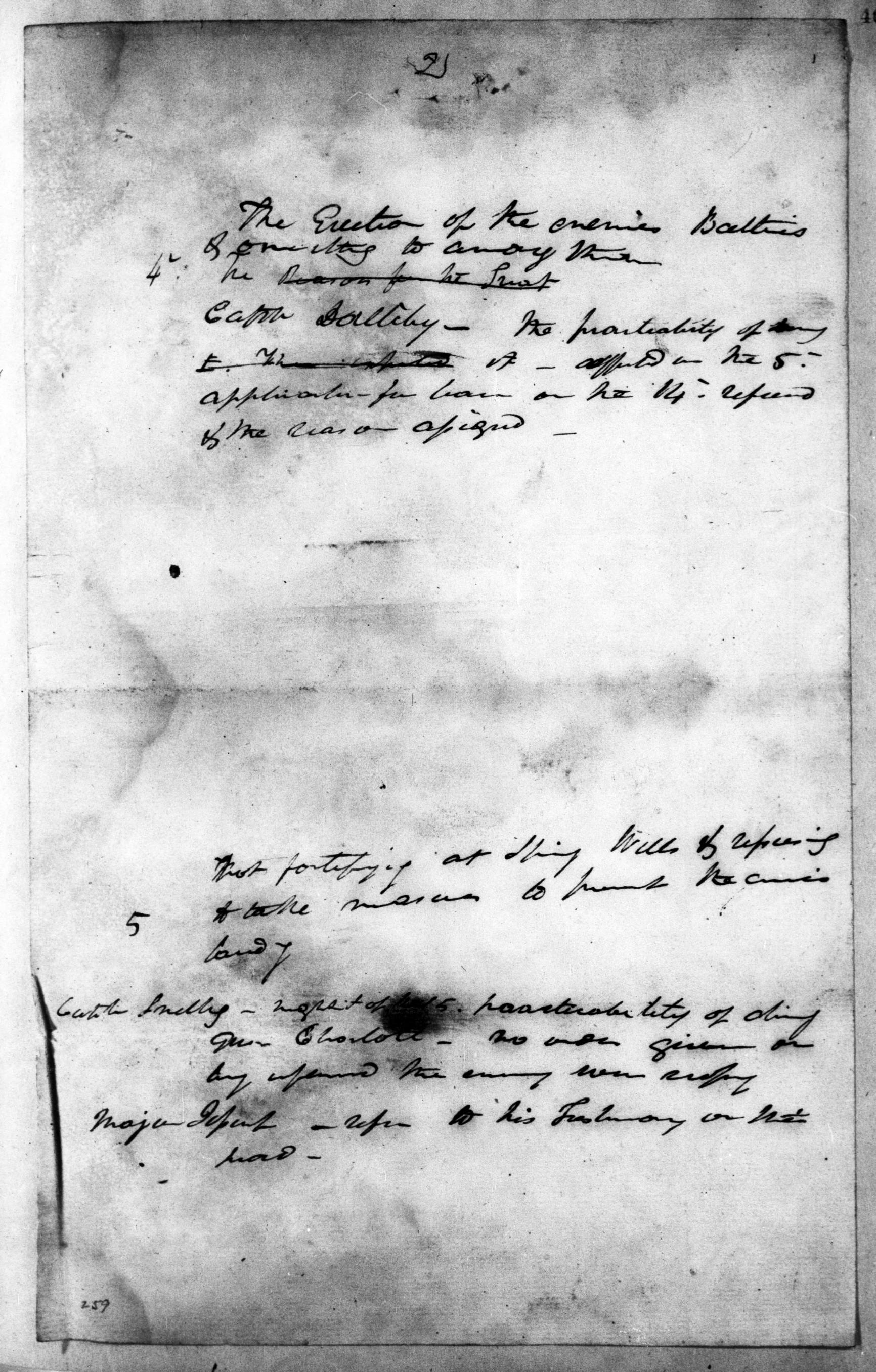 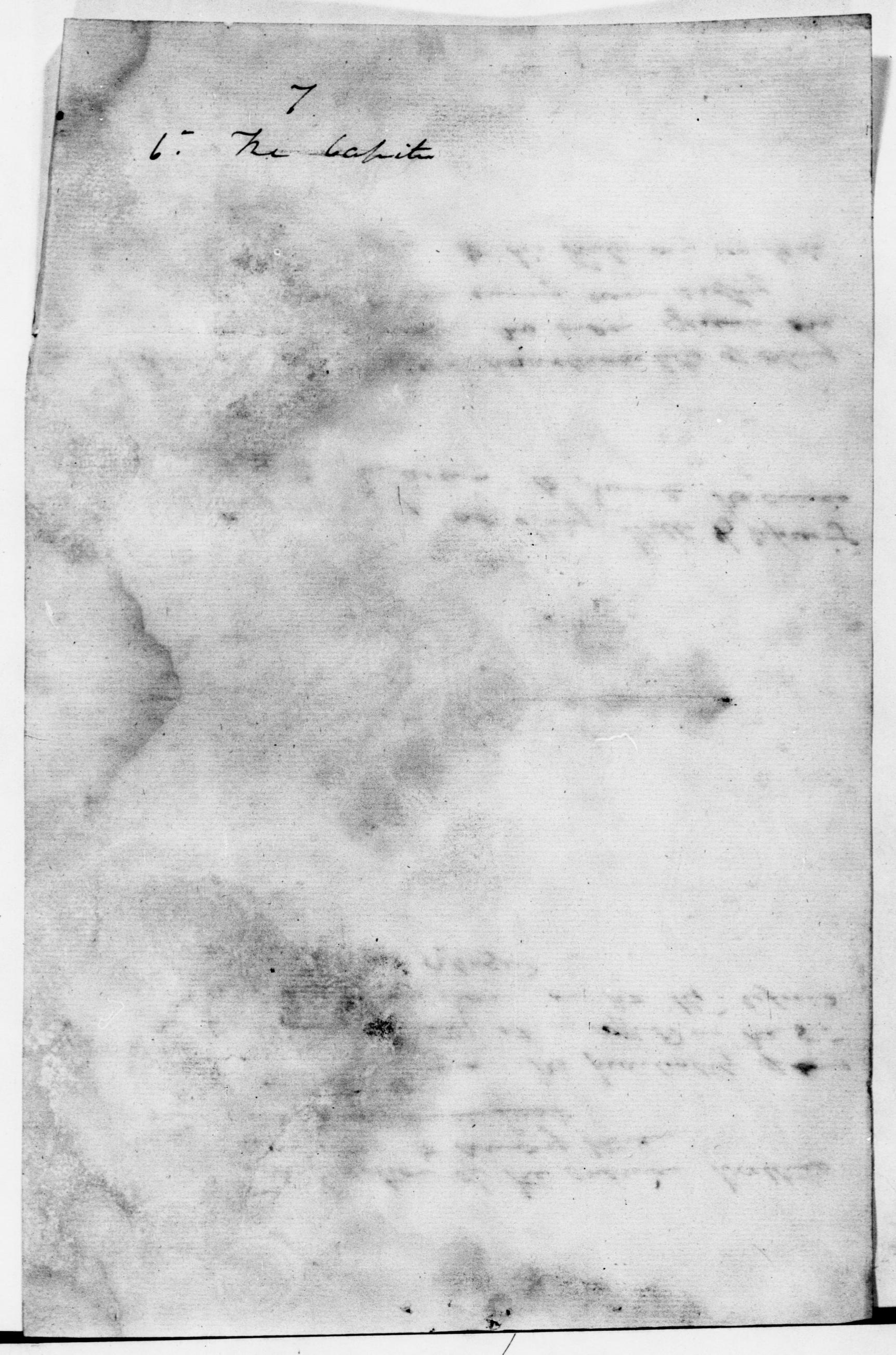 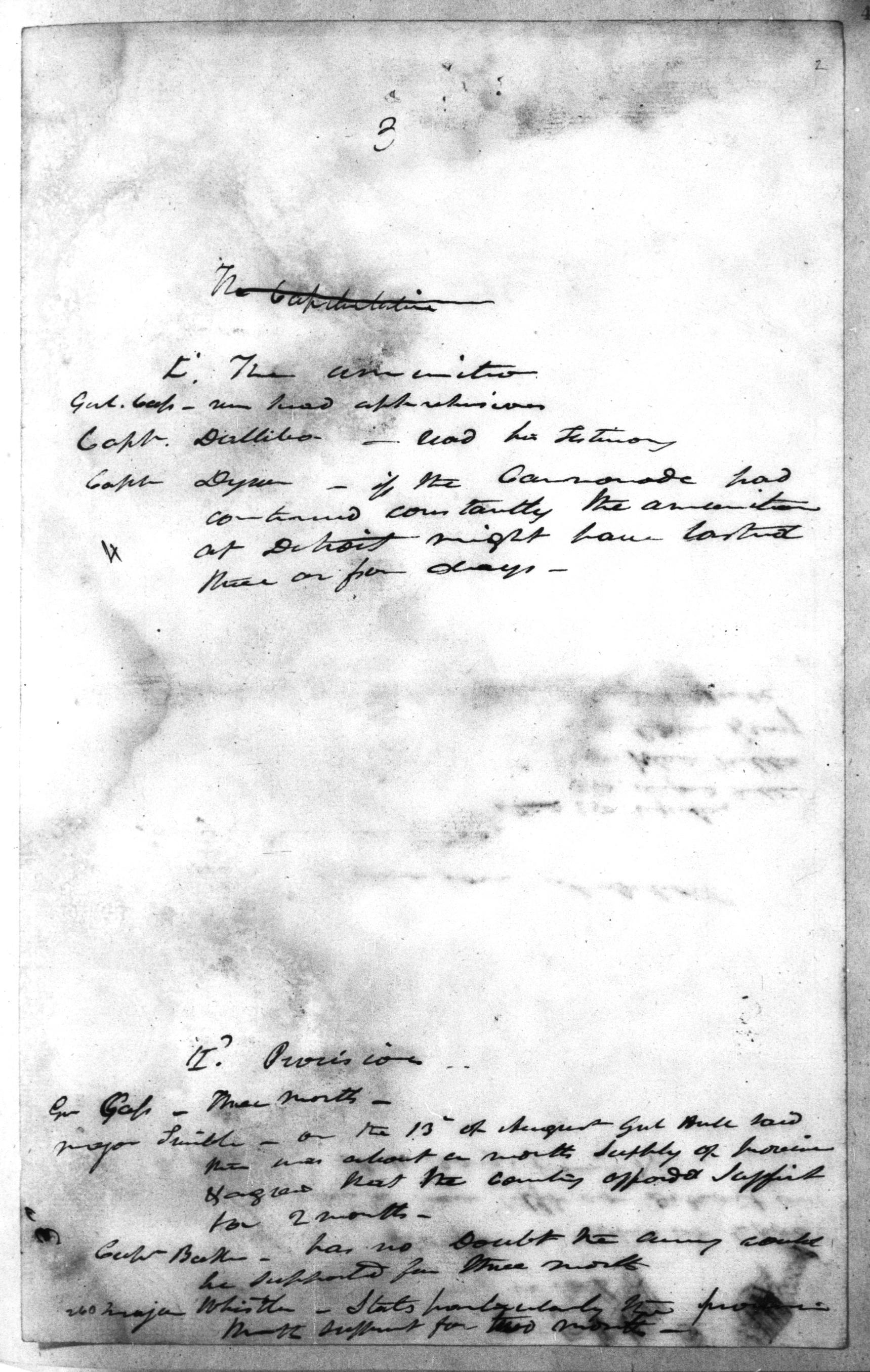 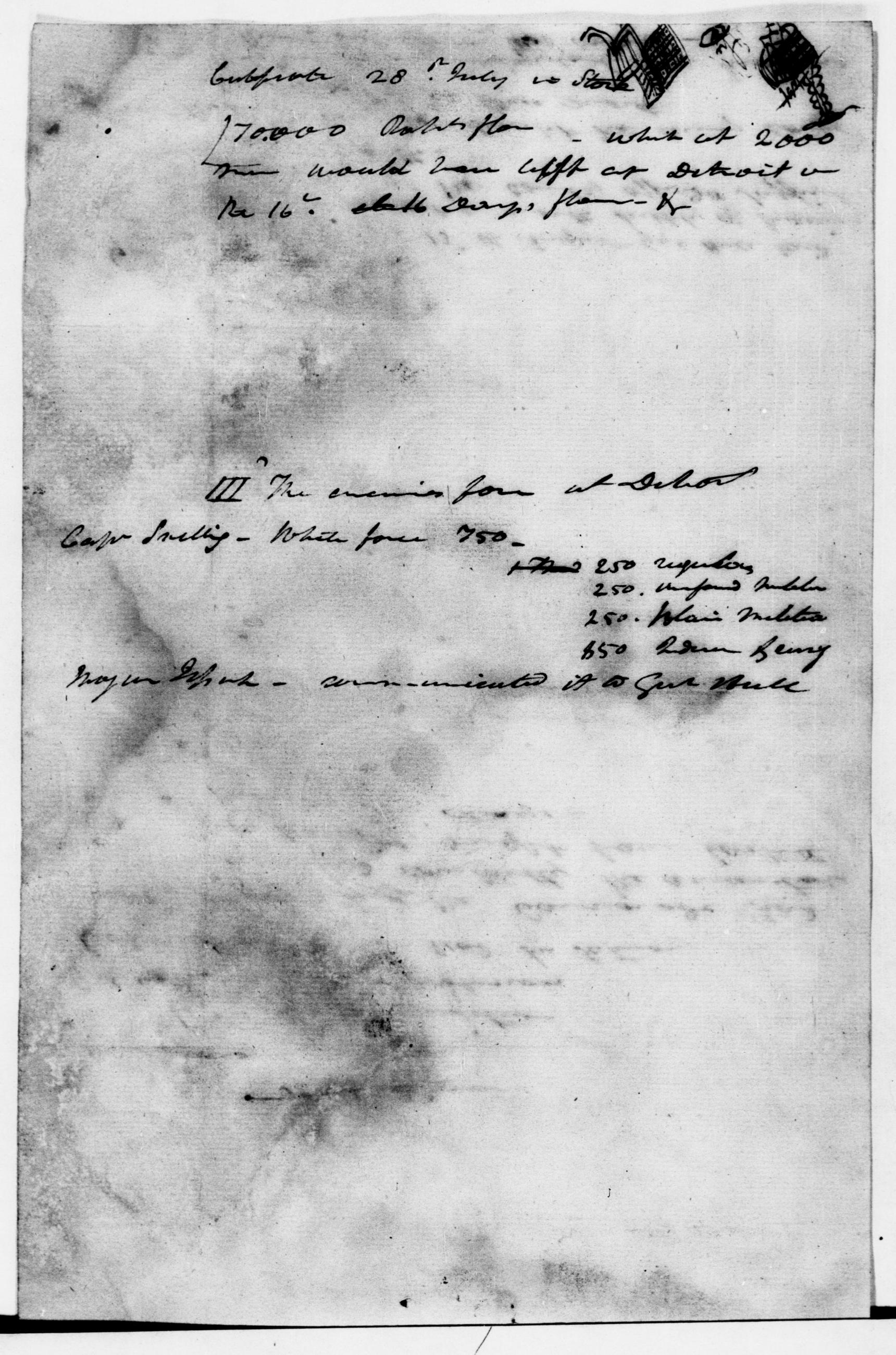 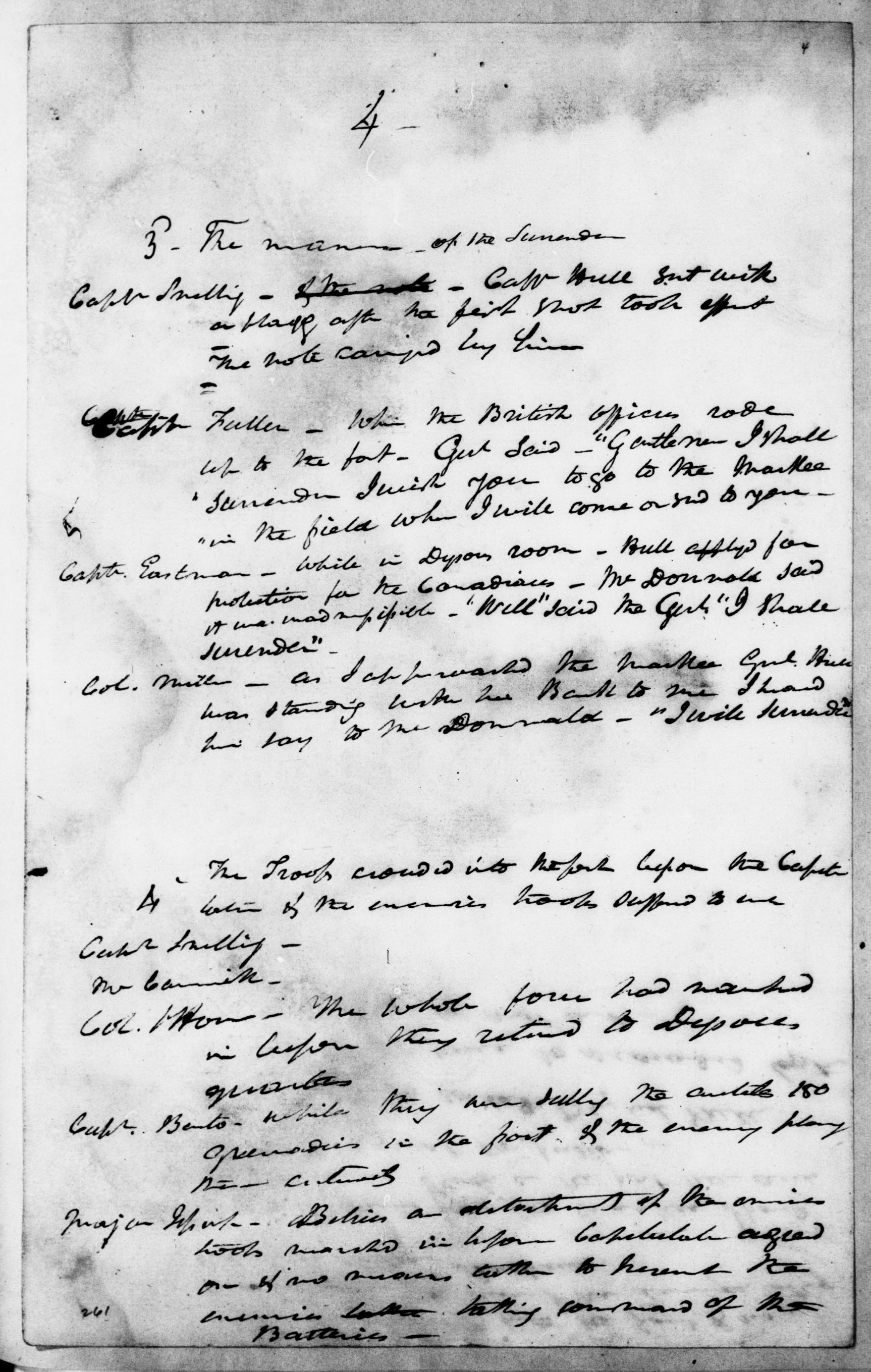 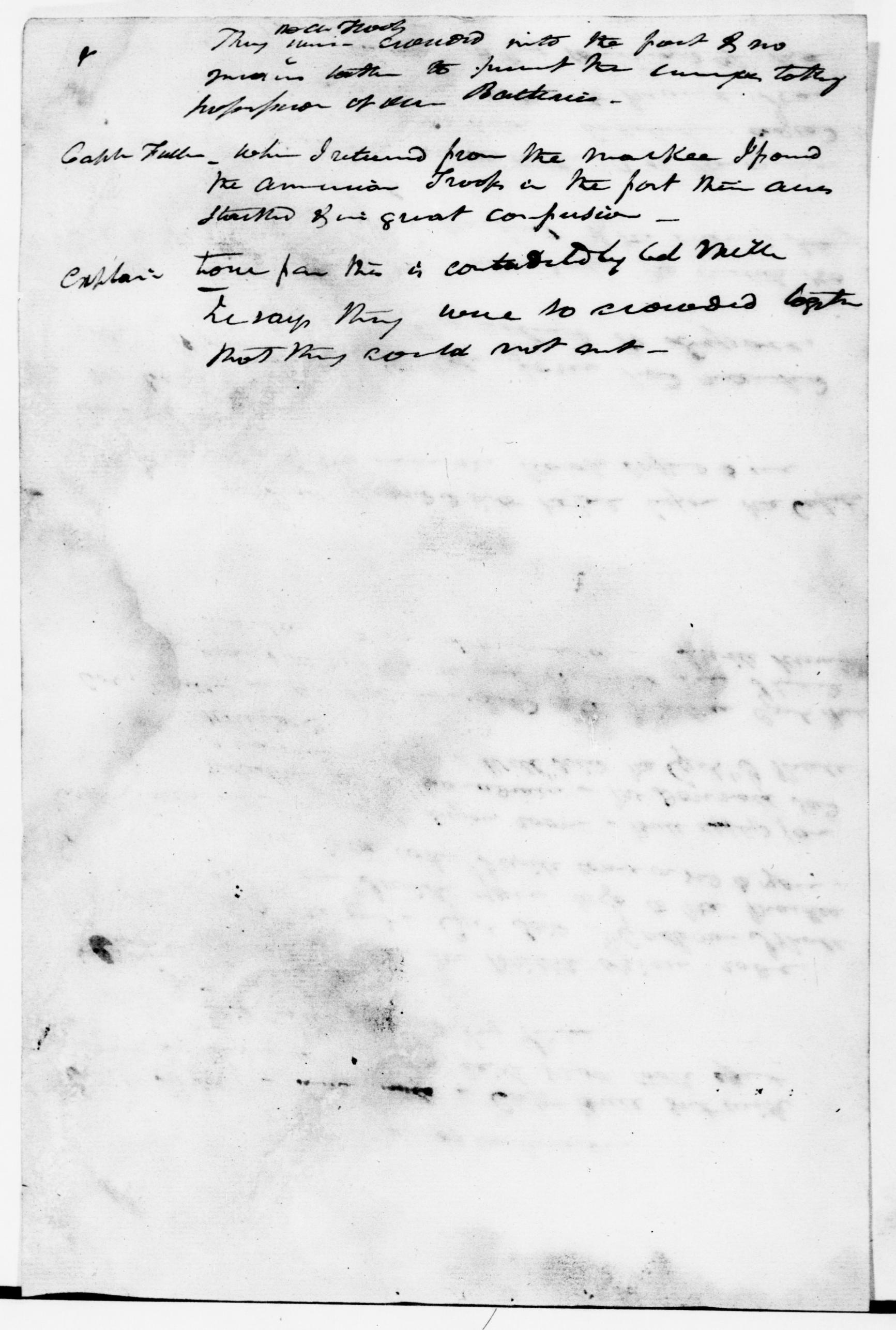 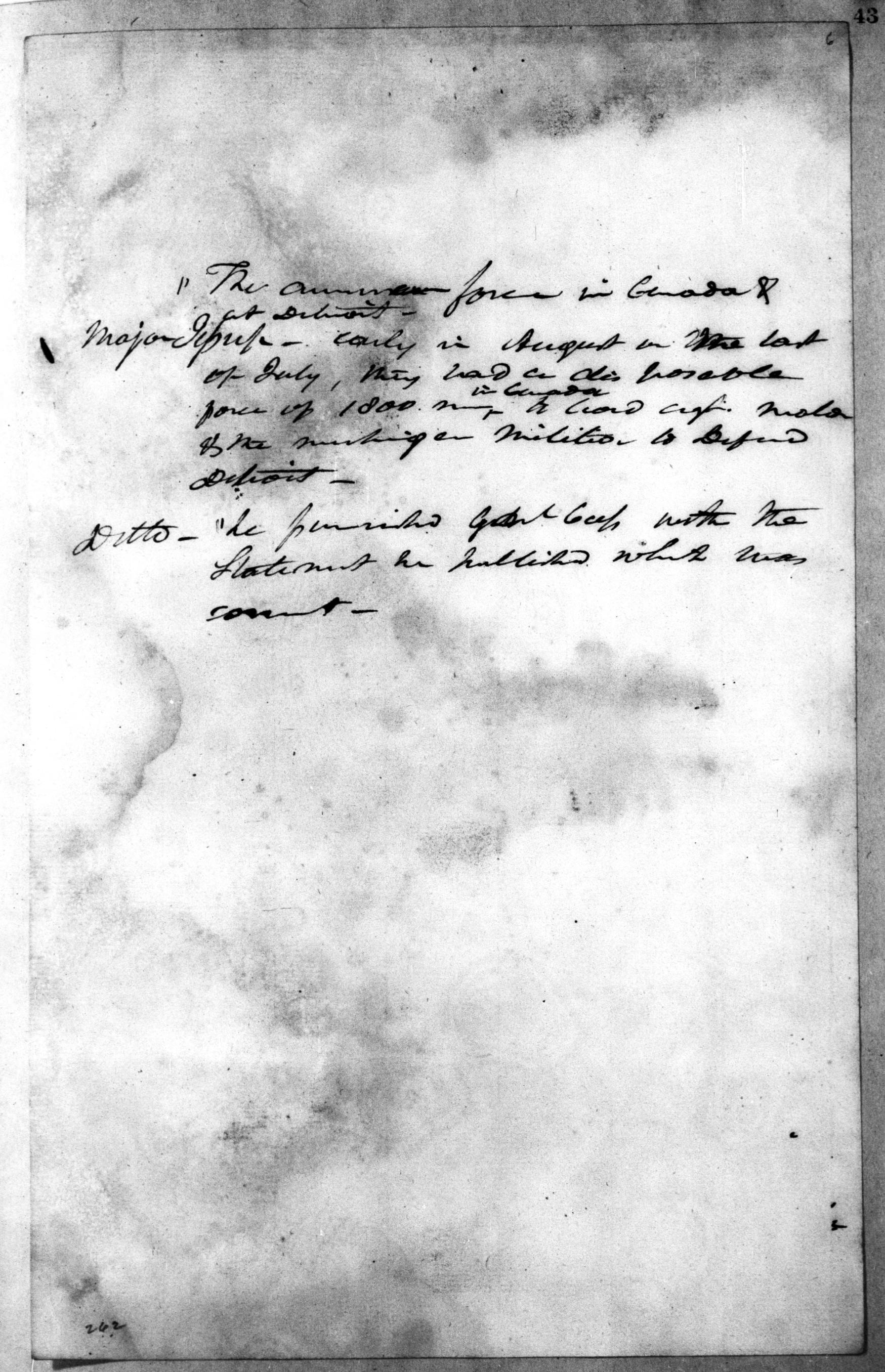 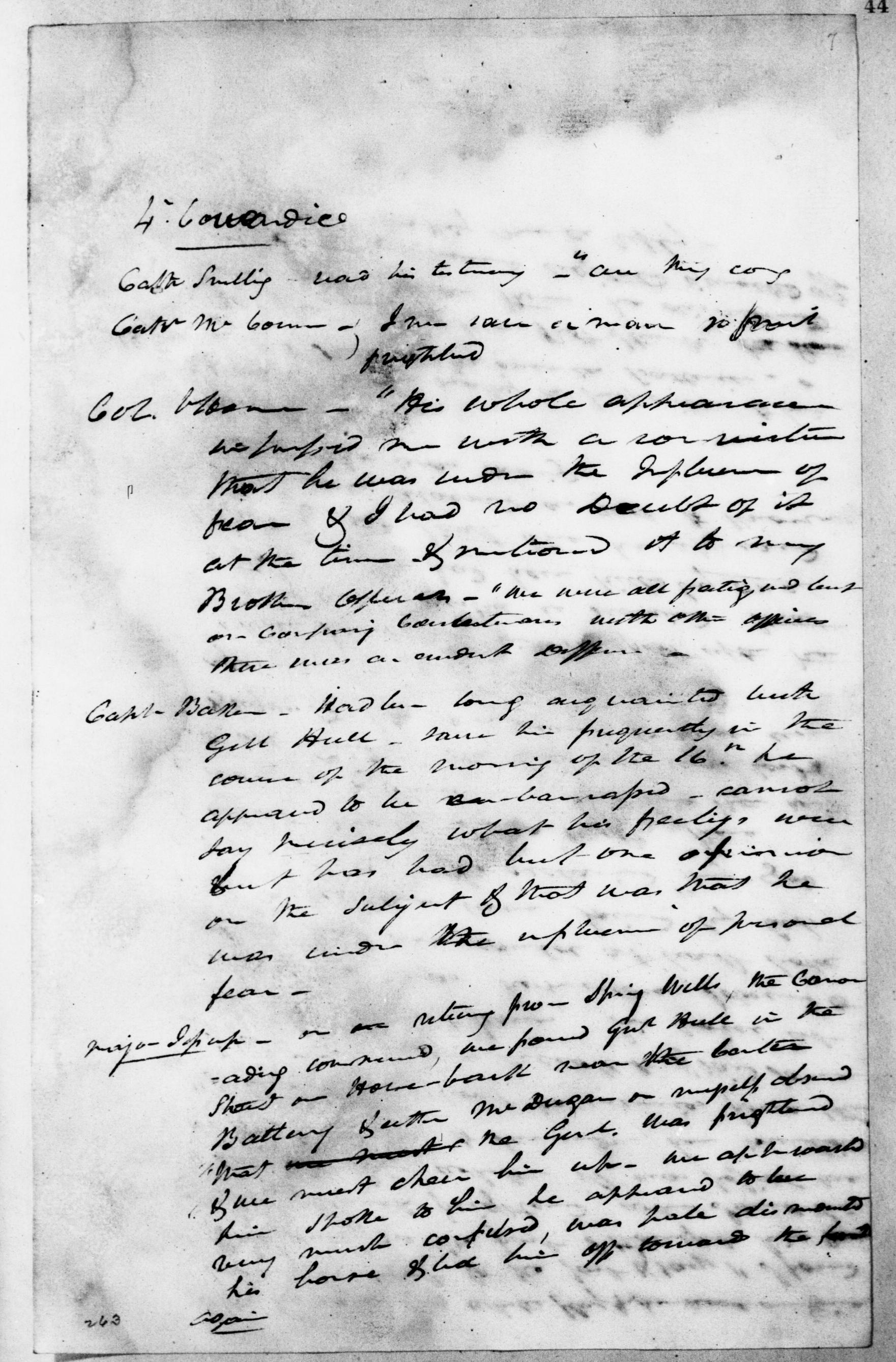 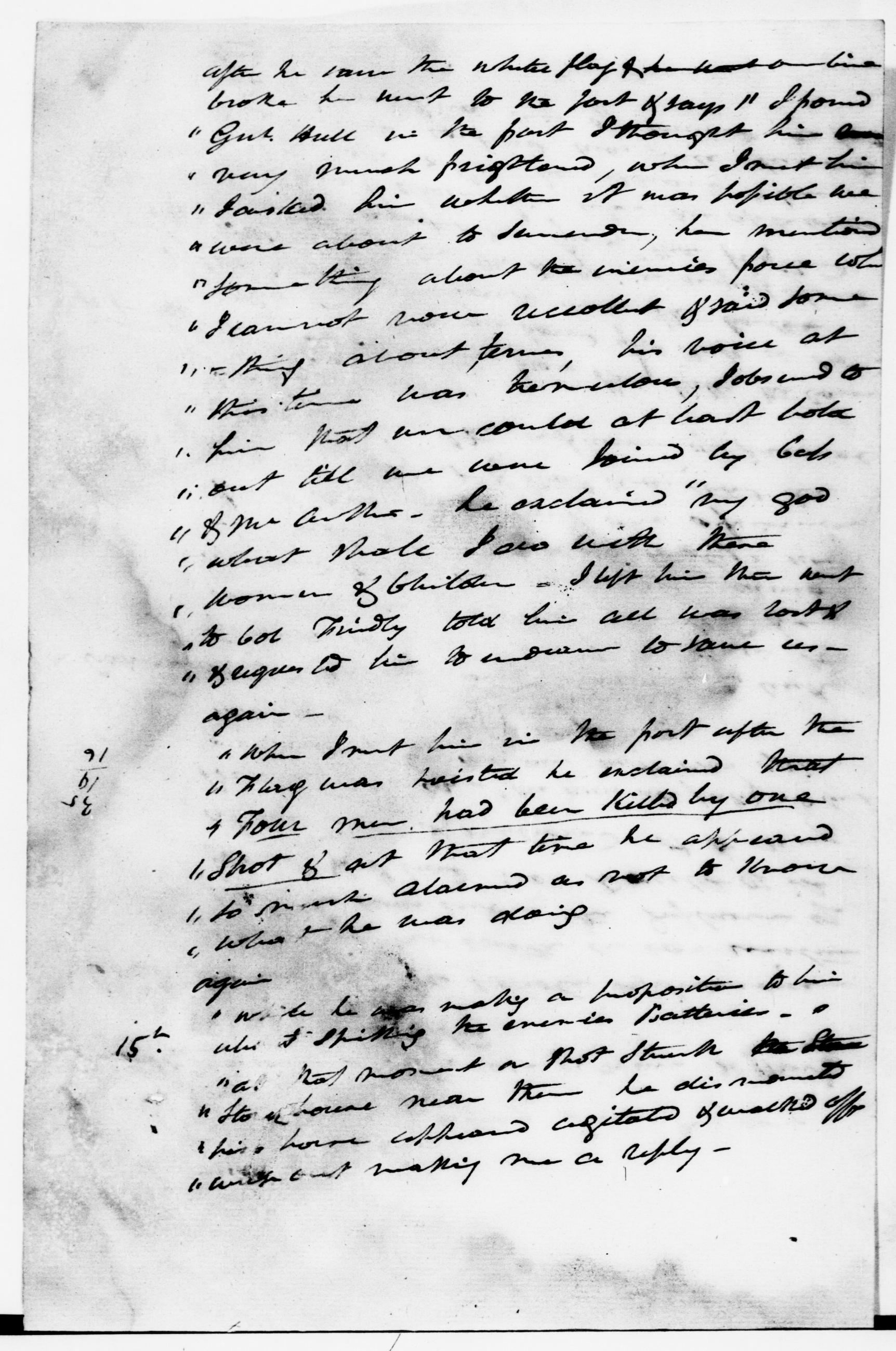 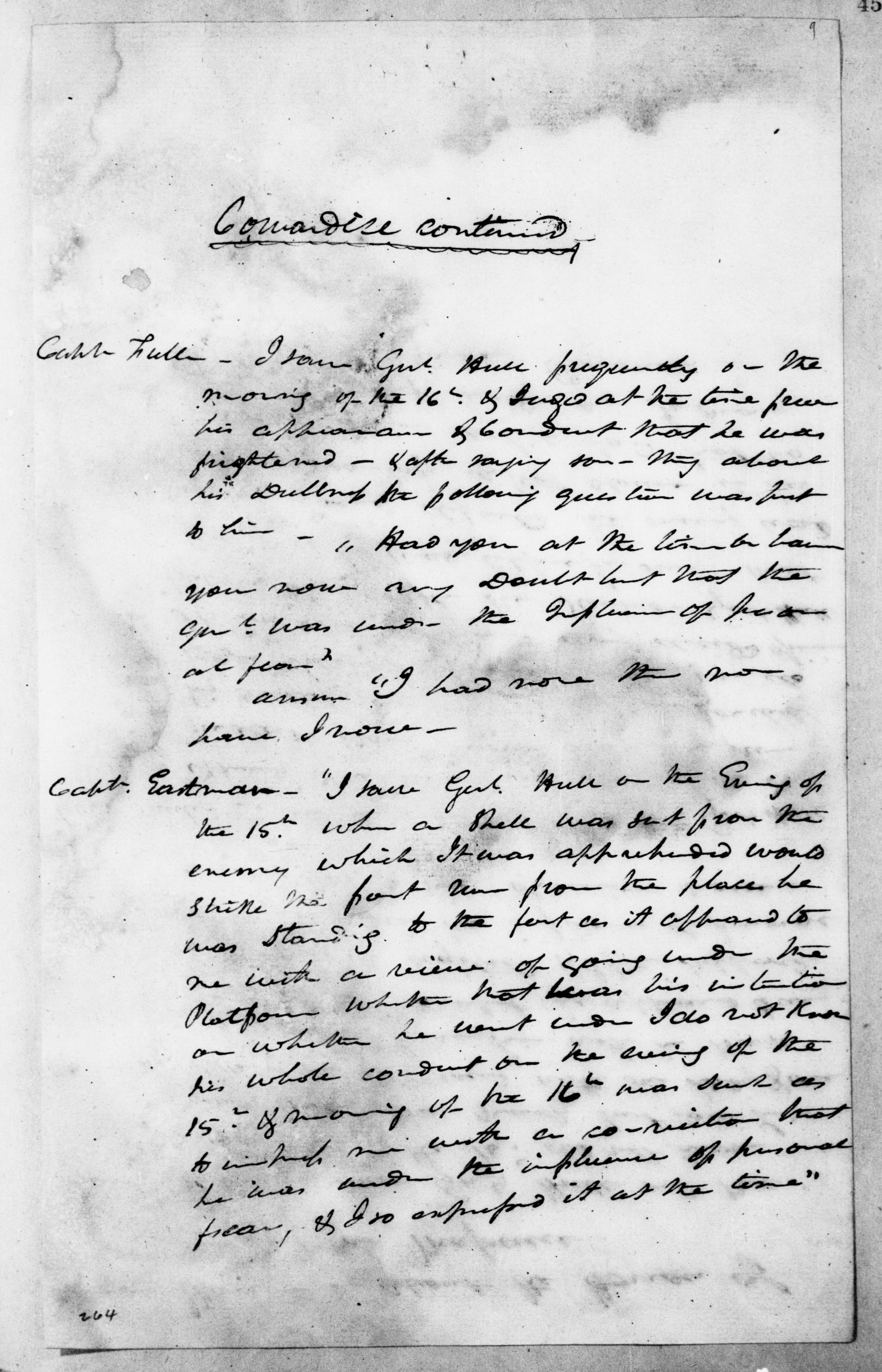 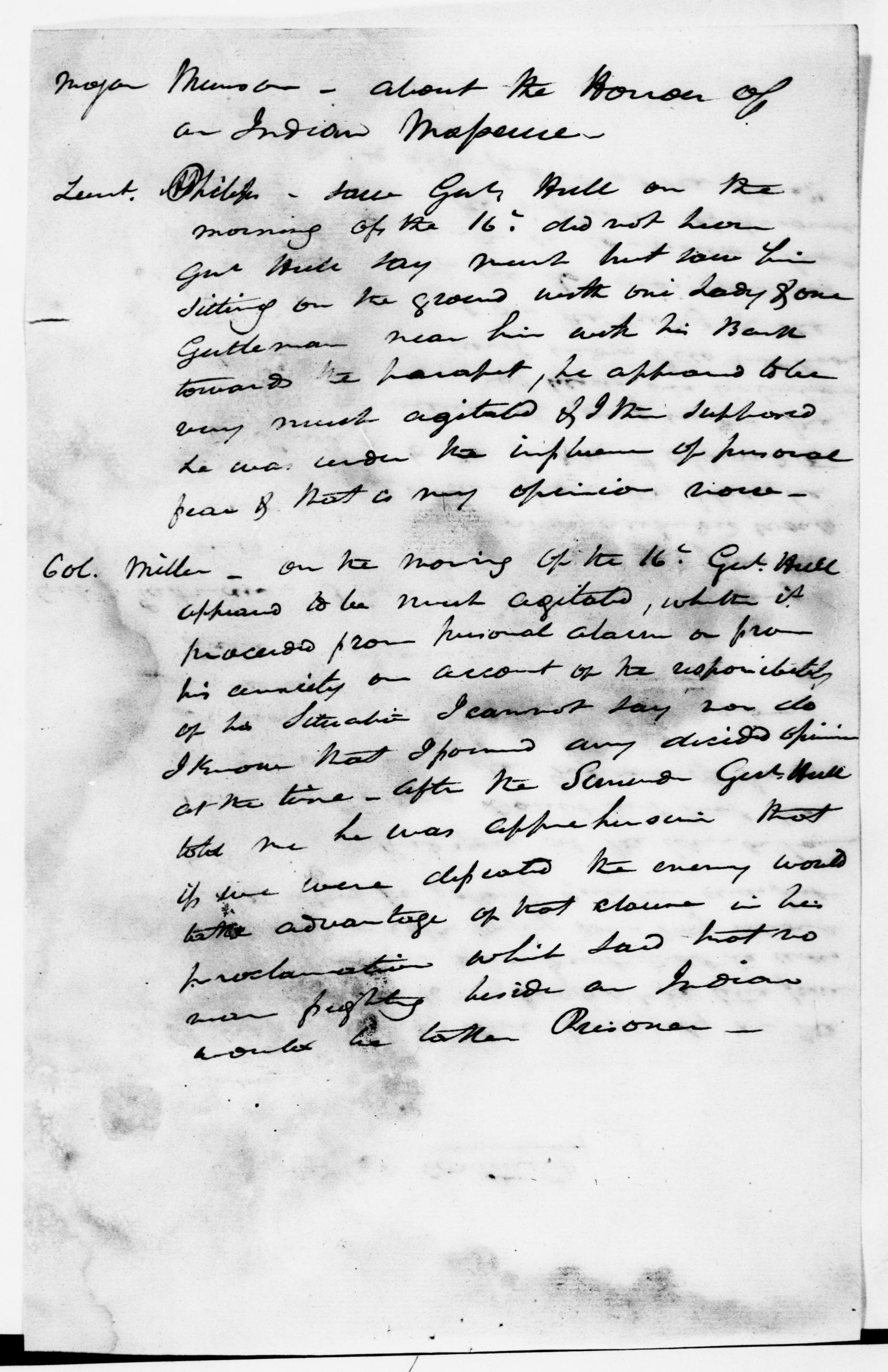 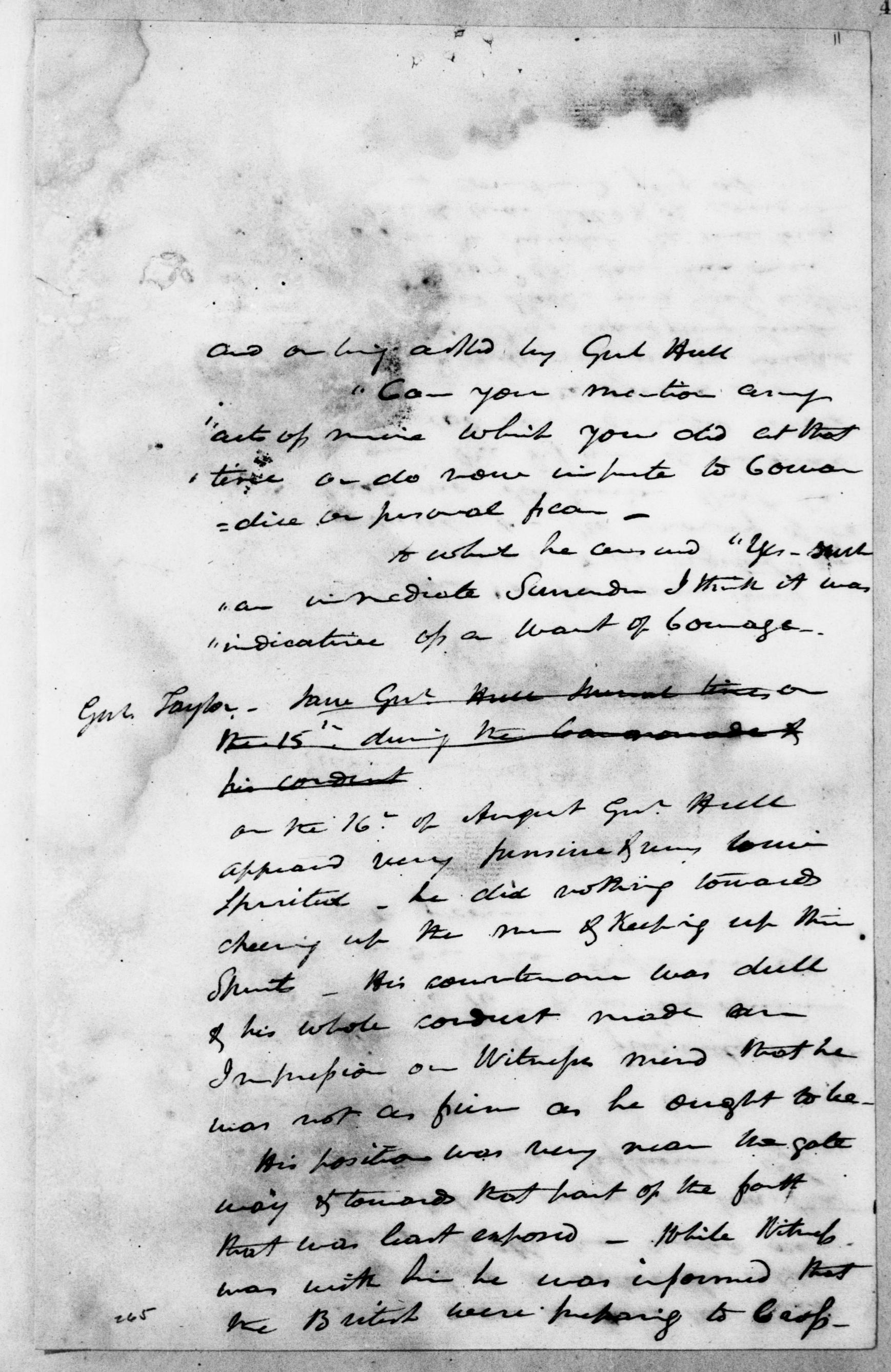 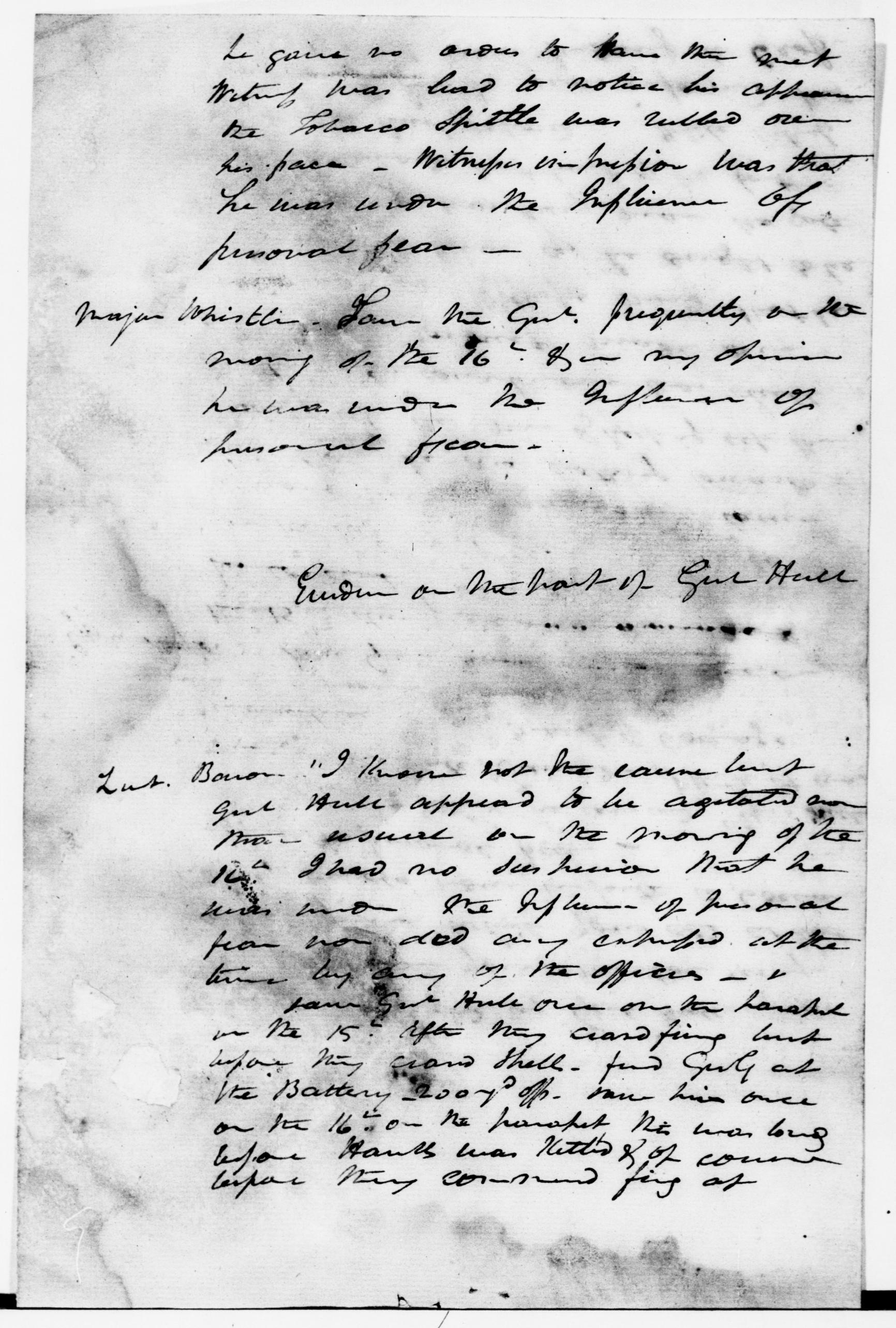 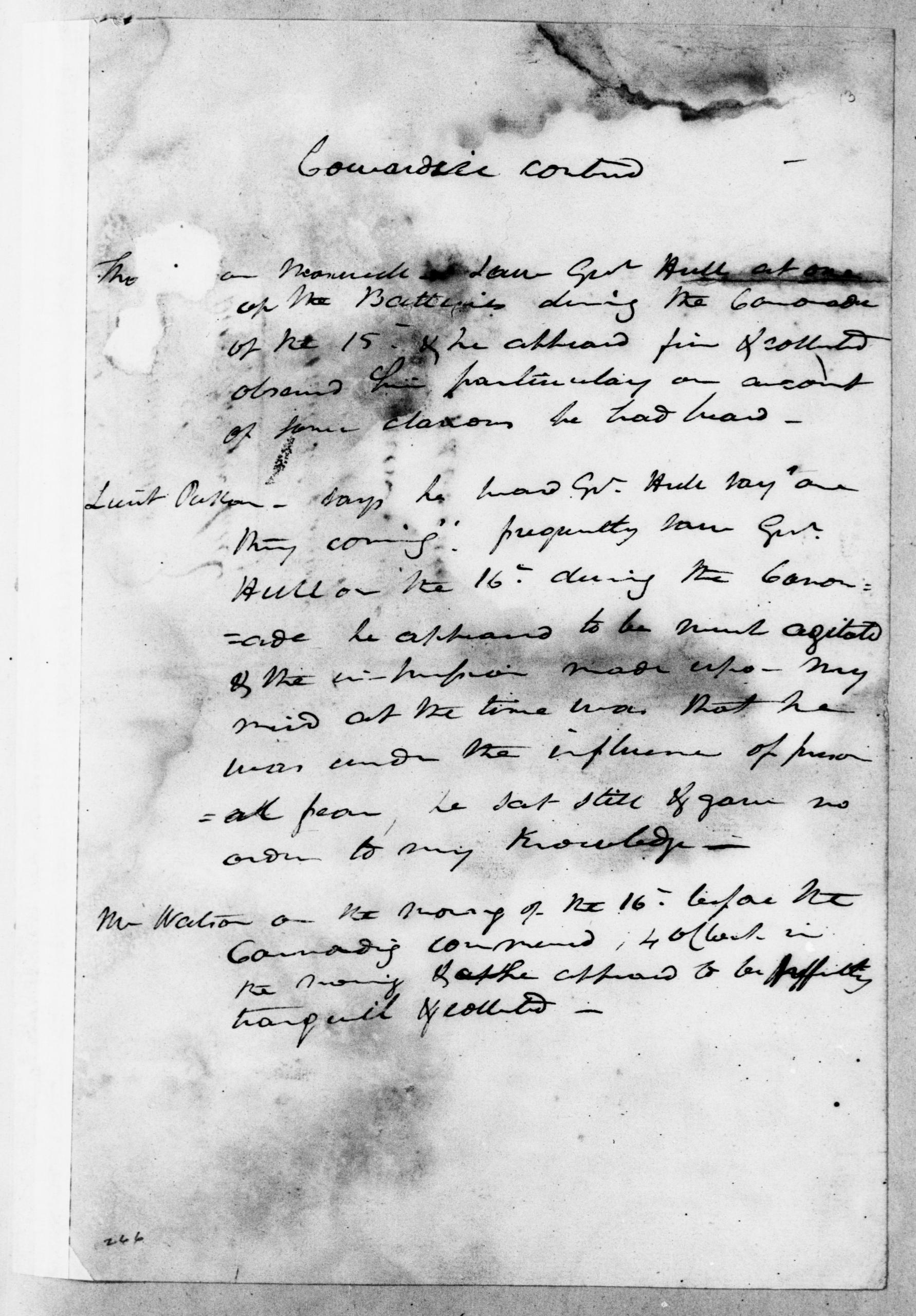 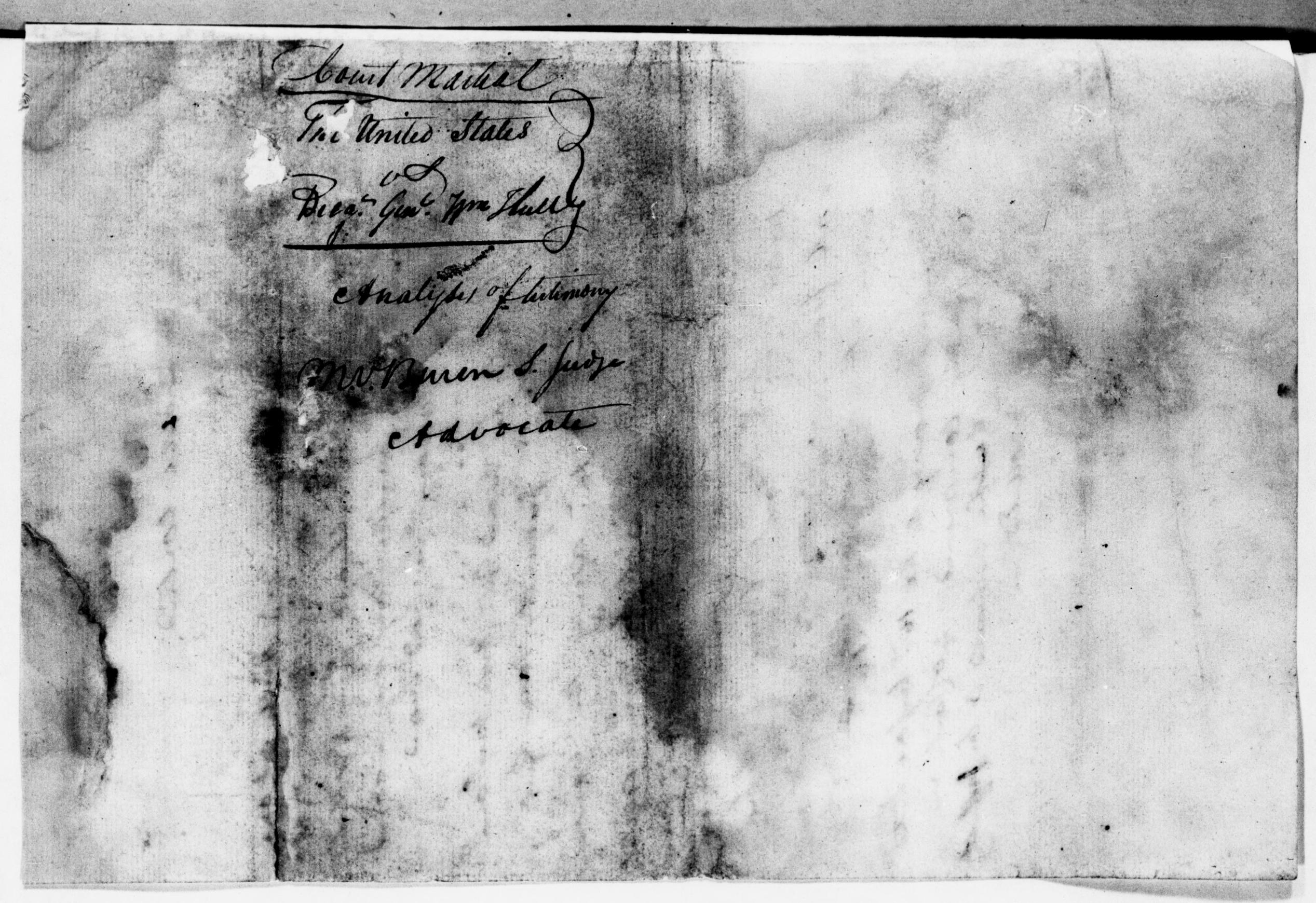