W. Knaggs — 15th. August asked Hull for Powder who said he did not know whether there was any or not, &c. Capt. Hull <intervened> ^&c^. Capt. Snelling sent down with 50 men. Snelling ordered to return. Informd. Genl of the Landing & rcd. no answer, & subsequent answer. What Henry said about the Declaration of the British officers about the Flag being up.

Col Anderson — what passed at River Raisin from 17th. to 20th August. The conduct of the British & Indians at the River Raisin & the disposition of the Indians before when Hull passed Detroit River.

Richard Smyth — Declaration of War known at Sandwich 1st. July. On 7th. August the artillery &c. crossed the River. Coucill of War determined to attack Malden that night, army pleased. Orders to recross, gloom on Spirits of men. British commenced on the 11 August to Build Batteries applications by officers to annoy them & general scornfully refused. On 15th. when Batteries compleated summons sent. Messinger orderd to wait Three hours for answer. In the afternoon firing commenced. No harm done Genl. Stowed himself in the fort. Several expresses in the night from Spring Wells for artillery but none Sent. Troops <still> stationed without orders. Firing re-commenced in the morning & news arrived of British Landing. 8 oClock order from the Fort for the upper Battery to case firing. Enemy then directed their fire to the fort & some men killed. The Enemy in sight. Went to fort for orders. Met Capt Hull with a white flag which he said was for a cessation of Hostilities. Two British officers arrived, Genl. went out to a <Marqkec> & then Surrendered the Fort & Left for the British officers to settle the Terms aft of Capitulation afterwards. Capts Hulls declaration to Captn Bulloc. Counted the Enemy 6700 Whites, 250 Indians. Our force 1800 effective <more> provisions &c.

Capt John Whistler — in Command at Detroit when Hull arrived, states amount of ammunition when he arrived, hoisting a flag by Capt Hull in the presence of Genl. Hull. Observed the General Sheltering himself. States what Shot took Effect. Amount of Provisions. Genl not out of the fort.

Lieut. John Anderson — Engineer [. . .] on the 7th. August 2. 24 pounds 3 sixes & 2 fours were mounted & in readiness to march to Malden, order issued for all to be in readiness to march to Malden on the 8th. The same day (3) orders countermanded & orderd to recross. On the 11th. Fort compleated, felt confident of Security. 12th. orderd to be destroyed by the Genl. & the reasons assigned <Brooks> coming up, Indians &c. On the 13th. a Battery was built by order of the Genl. on the river below the Fort Detroit on the 14th. an other in Battery in the Center of the town. One had been built by Capt Whistler between the two above mentioned. 2 Twenty four pounders were stationed & for the upper Battery. ☞ 3 in the Center & 2 in the lower. At 5 in the afternoon of the 15th. firing commenced, & around between 8 & 9 in the Evening practicability of attacking Vessels in the night on Morning of 16th. firing re-commenced. Advanced with the 6 pounder & was in fair view & near the Enemy when order came from Genl. to cease firing. Ammunition then in the Boxes. Col. Findly & Major Denny were retreating to the Fort

Thomas Dugan — Night before Surrender reconnoitered the British at Spring Wells will. Fixed on a place ^Together with Major Jessup^ to erect a Battery for the purpose of Sinking the Queen Charlot. Appealed to Genl. Hull for the a 24 Pounder who referred it & the reason went a seccond time to Spring Wells & found Snelling there, applied for 150 & afterwards for 100 men to go over & spike their Cannon but was refused.

—The pass to “George McDougal.”

Major Tremble – The flags sent obliquely on the 13 or 14 August to Sandwich &c. & same day the Cass & McArthur were sent off.

agt. The People of 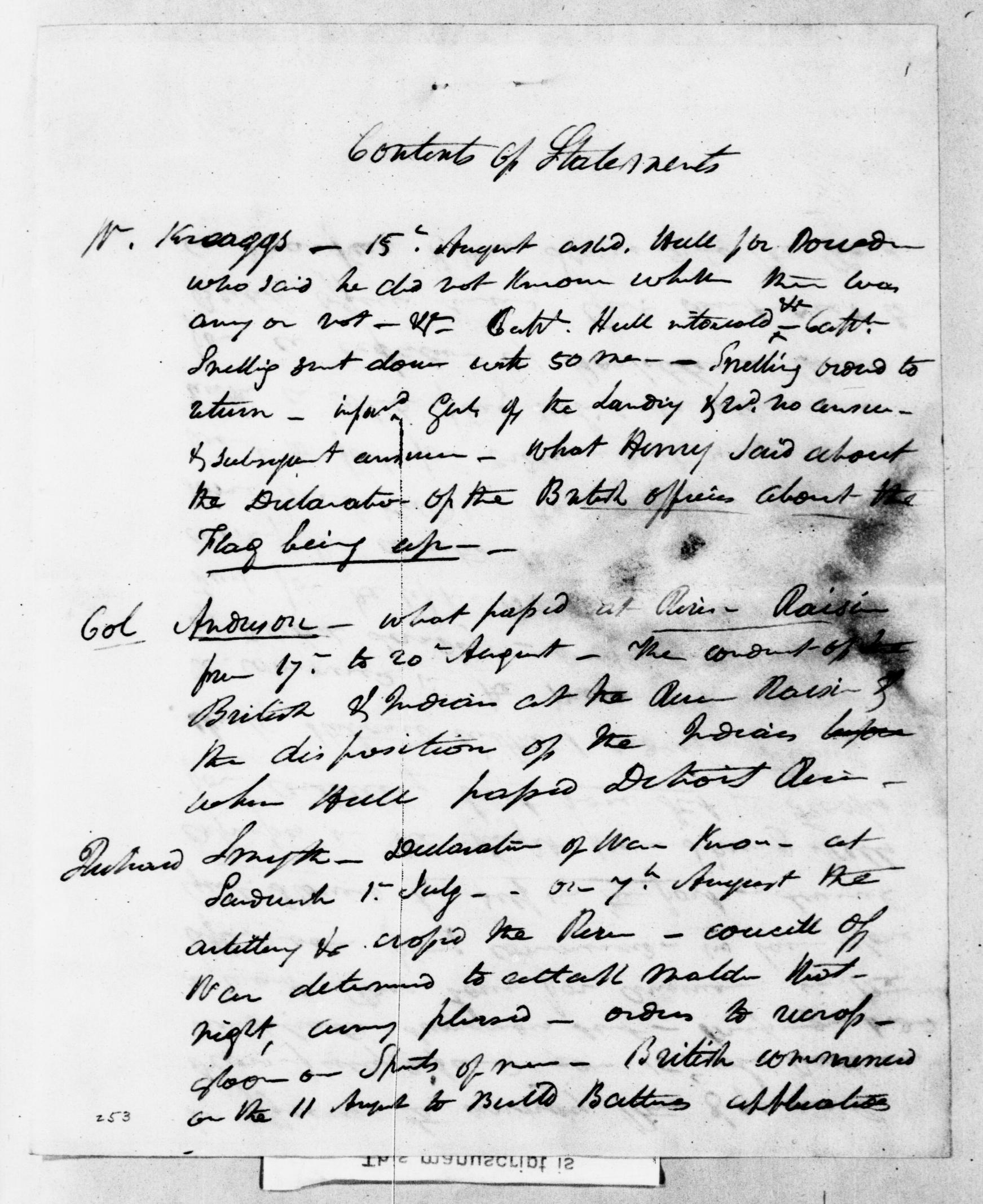 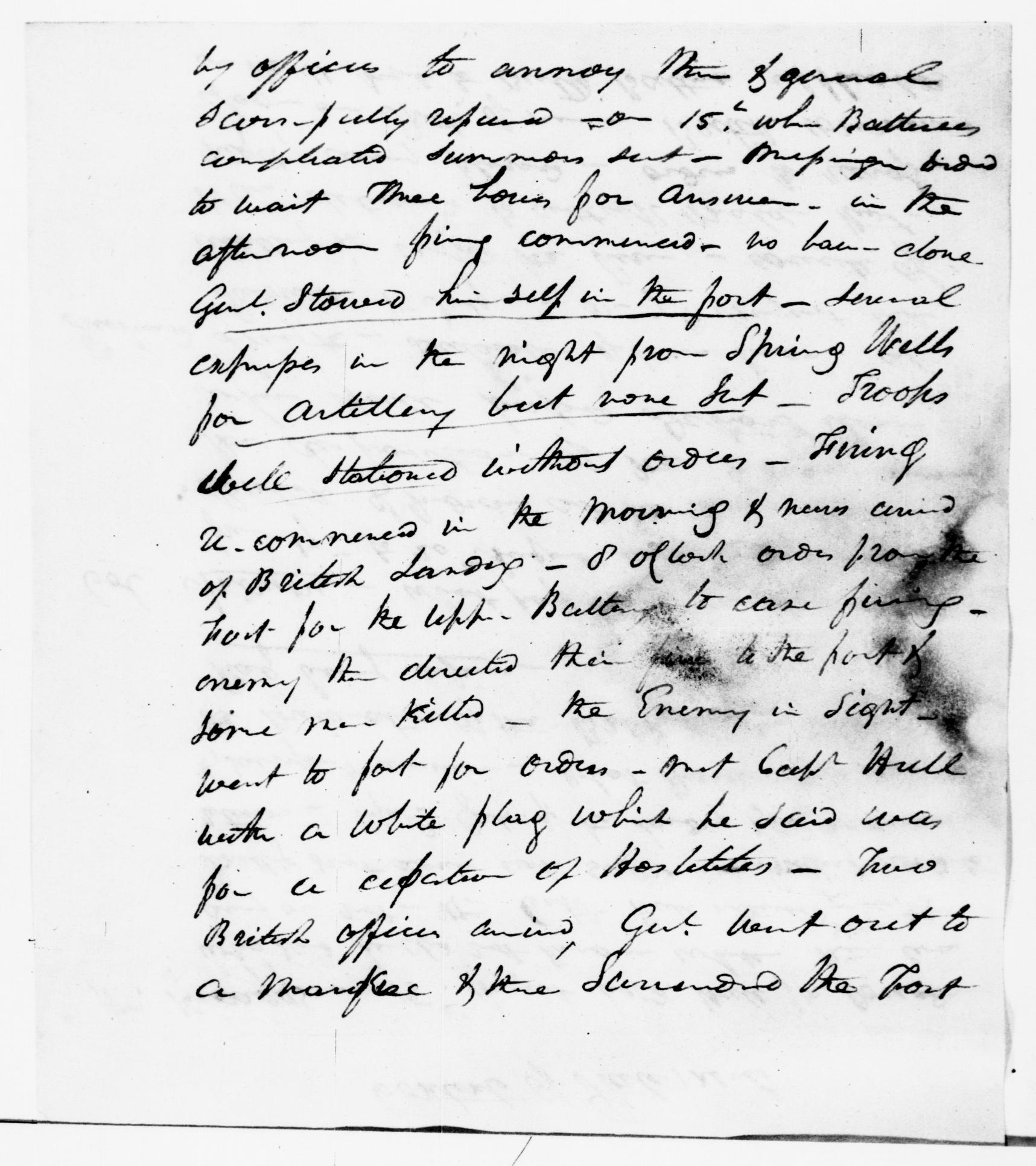 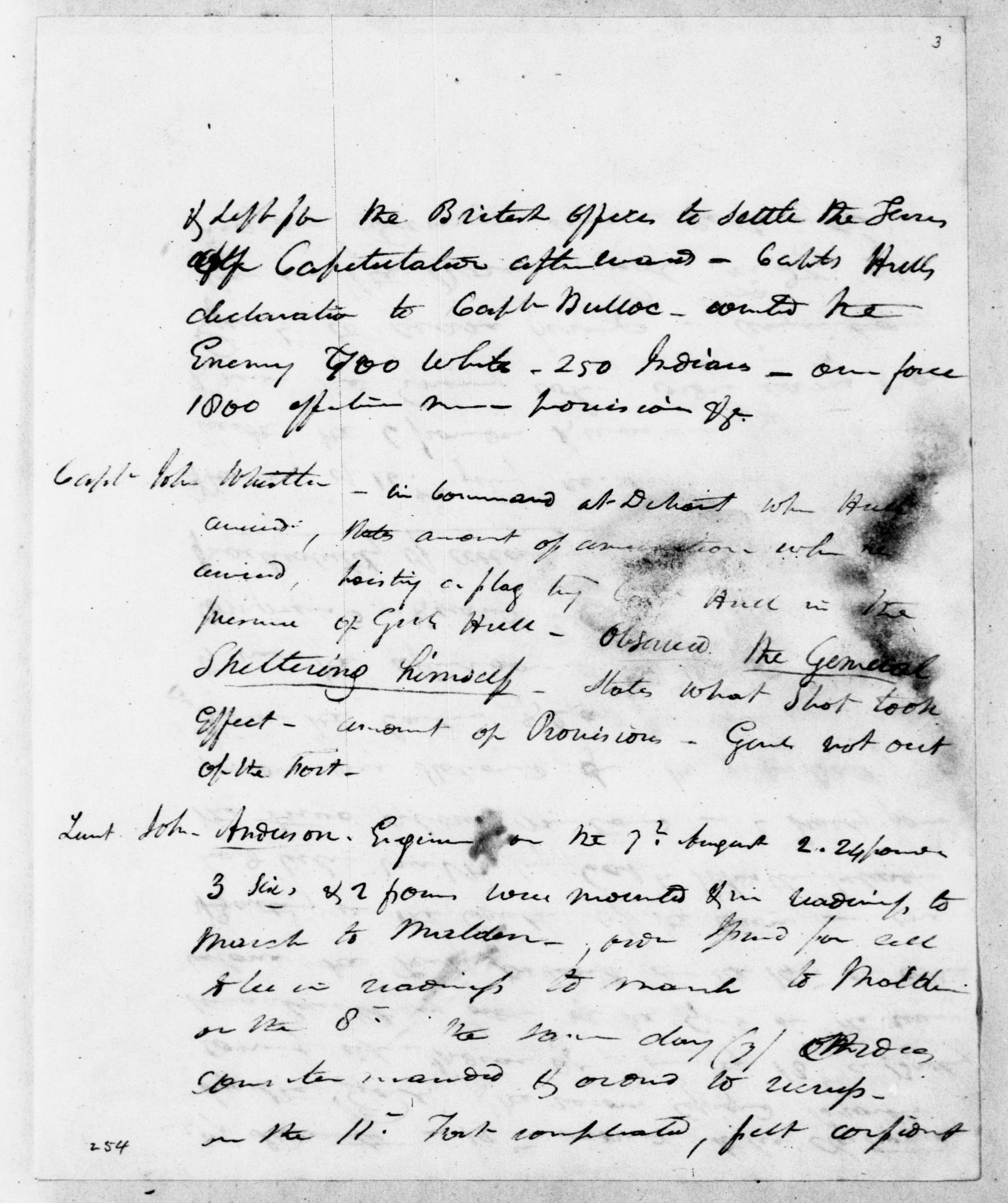 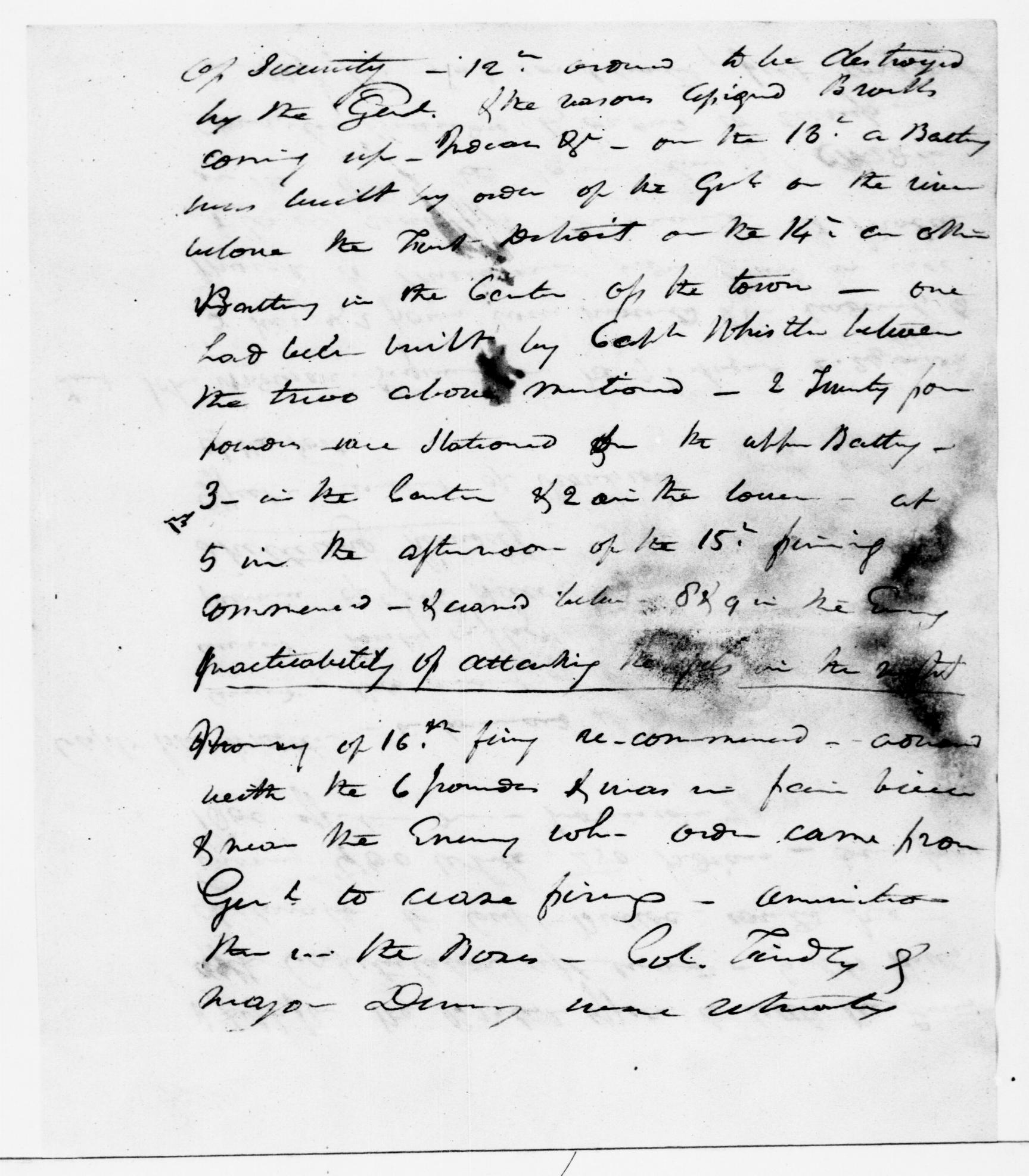 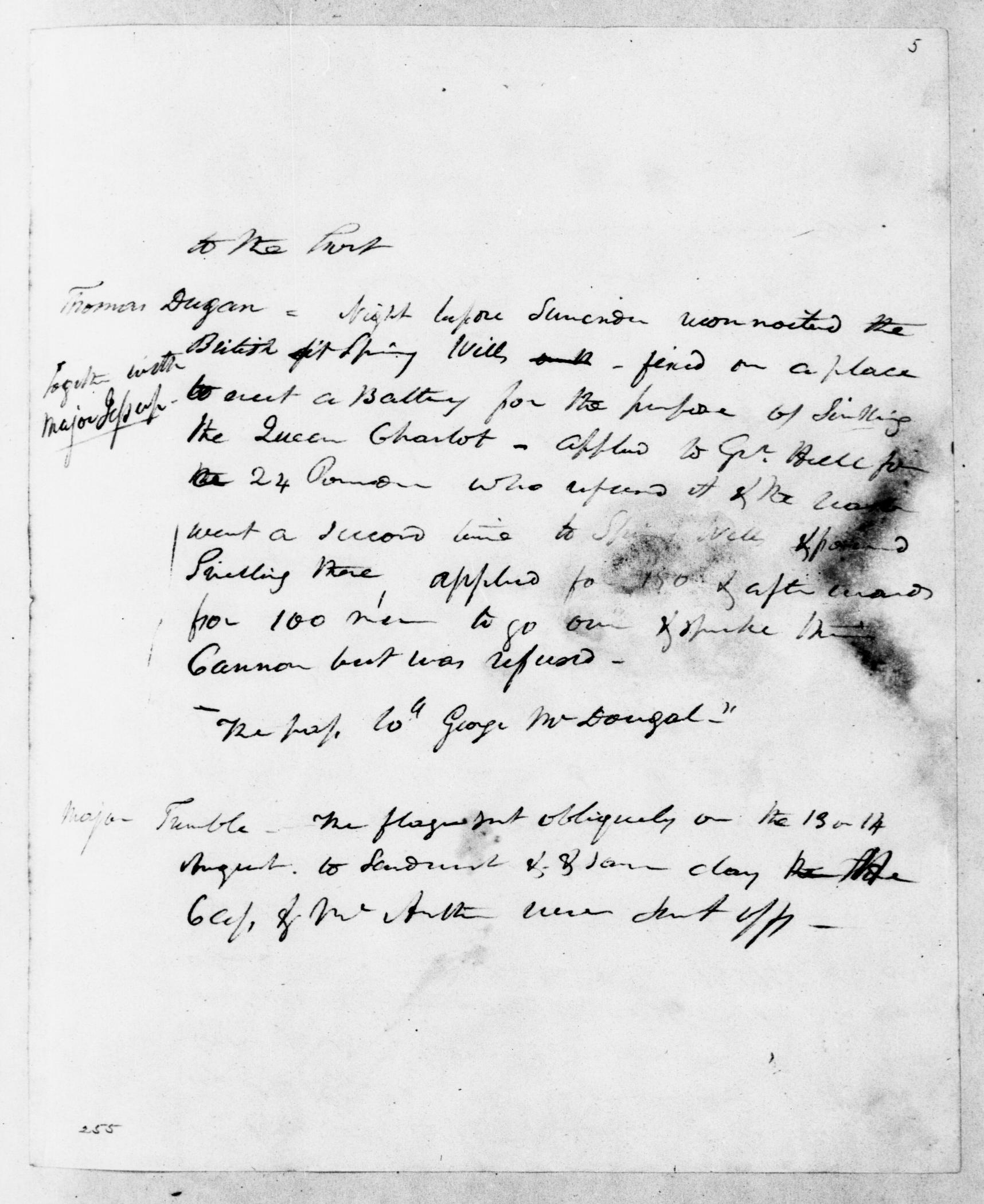 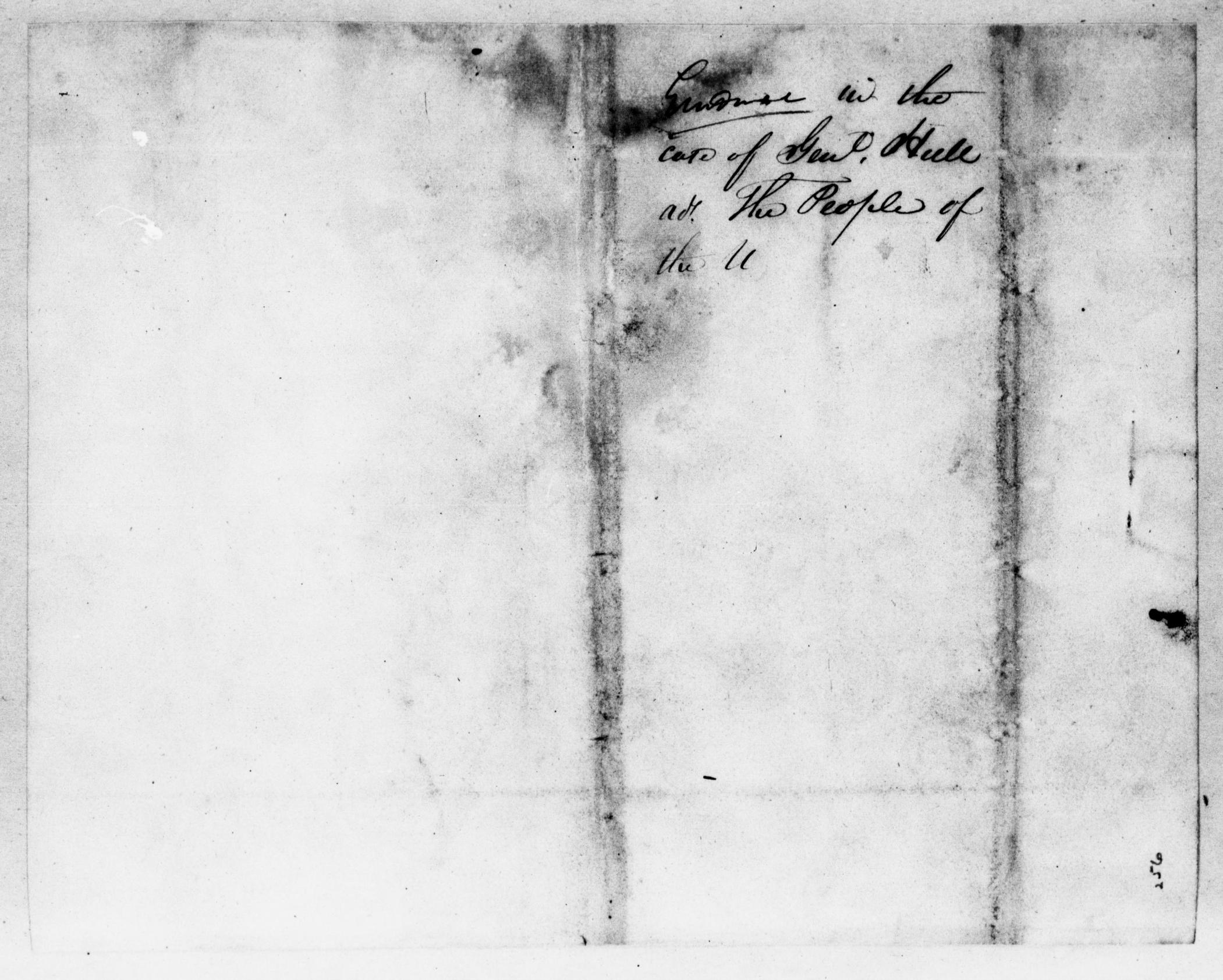