Ist. The Creation of a fictitious Capital

2d. The substitution of a representative for money.

2dII. The nature of the Business subject to Danger.

Ist. From too great an accumulation of fictitious capital wh[ich] subjects the realities of the country to an irresponsible fund

2d. From the want ^destruction^ of Confiden[ce] in its representative character & (of consequence & entire) ^a consequent^ dispution of its value.

IIId. That confidence can alone (depend) ^be sustained^

Ist. (On) ^By^ the belief that it is what it purports to be a representation of Specie & redeemable as such

2dly. (From) ^By^ a (confidence) in) ^reliance on^ the virtue & Integrity of the agents who emit it.

IVth. The destruction of either of those sources of Confidence destroys the Value of the paper.

Vth. Our actual Situation & ^the^ extension of Banks must destroy both.

Ist.The Specie in the union cannot be calculated at more than #

3d. The (Idea (often) of) ^belief therefore in^ the ability of Banks to redeem their paper, should any cause drive it to its source, is already & must be abandoned

4th. The virtue for manner in which our Banks go into operation viz or ^what is called^ foreign paper, shews that the Idea of a redemption by Specie is not even indulged in at their very inception

2dly. The character of the agents,

Ist. at the Commenmnt of banking business, it was confined to Mercantile men, of high notions of credit &c.

2d. (That) confidence must ^of^ necessarily be destroyed by throwing the management of it into the hands of every body.

Ist. Bank Specie is driven out of Circulation

2d. Paper money is all the money we can depend upon to answer the purposes of trade, which has become extensive in proportion as the amount of supposed cash has been extended.

3d. The Value of every thing has a proportion to the Value of your Money

4th. a Depreciation of that Value not only, produces a like depreciation in the Value of property but, an entire stagnation. Like at the revolution your notes will be made payable in Coin &c.

5th. The good sense of the community must ultimately (destroy) ^impair^ rational confidence in bank paper. The failure of a single bank would consumate it.

VIth. agt. ^(only)^ the sources of dangers thus far delineated what are the inducements to continue the banking accumulation of banks.

Ist. Can any man doubt but that the encrease of banks must sometime or other lead to their destruction

2d. Can any man say or expect that there will be a more fit opportunity to stop than now, no.

1st.^That^ Banks generate applicants which is <proved> by experience, viz.

VIIth. If, as it evidently appears that on the course we are pursuing we are pursuing no better, stopping place can be got, why not stop now? What are the practicable benefits which result from this extraordinary extension of banks, which will warrant us to go further?

I. That Banks are beneficial to merchants in some degree is admitted

2d. They have the means already of being accomodated.

3rd. The benefit of their accomodations cannot depend on the place where they get the money

4th. Questionable, whether they are productive of ultimate Benefit to them in the country.

5th. The Danger arising from the facility of getting money & Specie of the Contrast betwen the Merchants of this day & of the former times when there were no banks.

6th. But the Merchants & extensive Mechanics are already satisfyed.

7th. The Farmers (have) ^derive^ no benefits from banks. The reasons why bank accommodations are the deadliest usury to them.

VIIIth. General dangers which exhist to the Banking concerns.

Ist. from the manner in which the banks conduct <side> their Loans

IX The solicitude of the public & the propriety of that Solicitude

Xth. The Restoration of Confidence between the Legislature & the people

Xth. The mistaken Idea that the Bank under the controul of the Legislature (&) their great influence

1st. The extension of the charter

2d. The <use> that this is not to be effected

3d. It is im-practicable <for>

Ist. Our Directors have no authority

2d They will have no disposition to do it.

XIIth. The destruction & restoration of public confidence & <have> of Bank agents, & the remonstration ^ances^ agt. it.

a speech agt. the

Pg. 7 appears to have been a piece of paper on which MVB started writing a letter. He then apparently used this scrap paper for his notes. The text of the abandoned letter reads as follows: 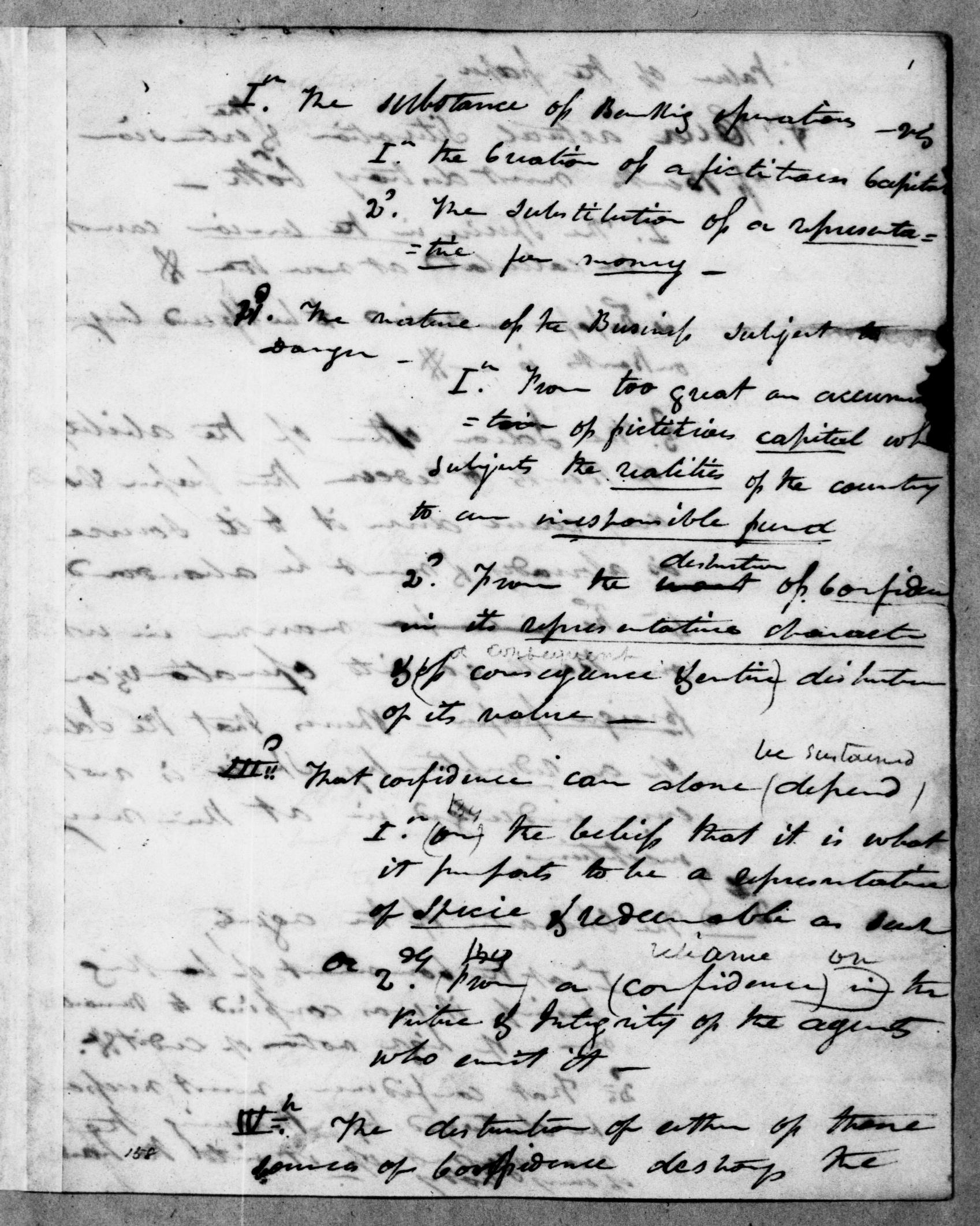 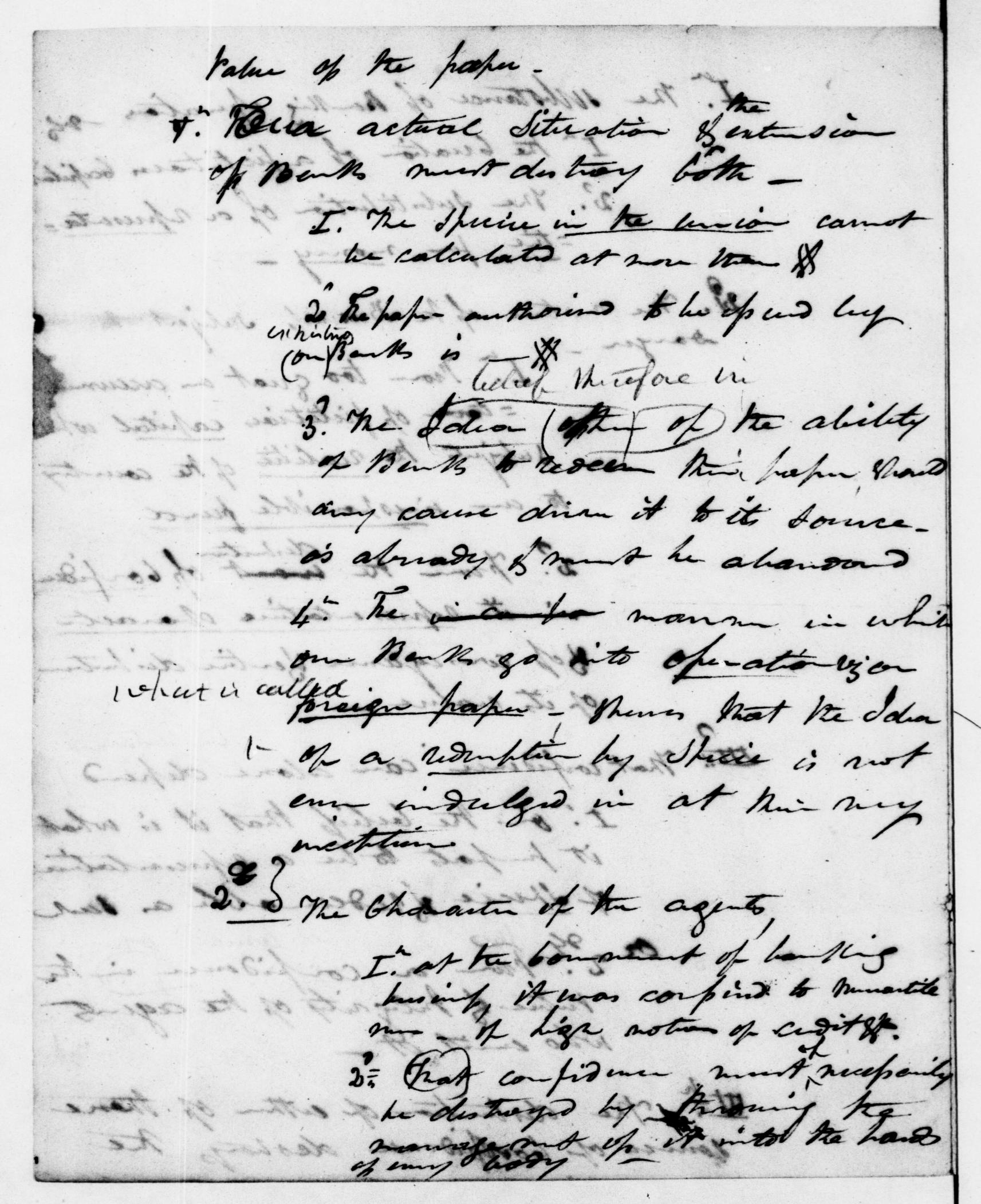 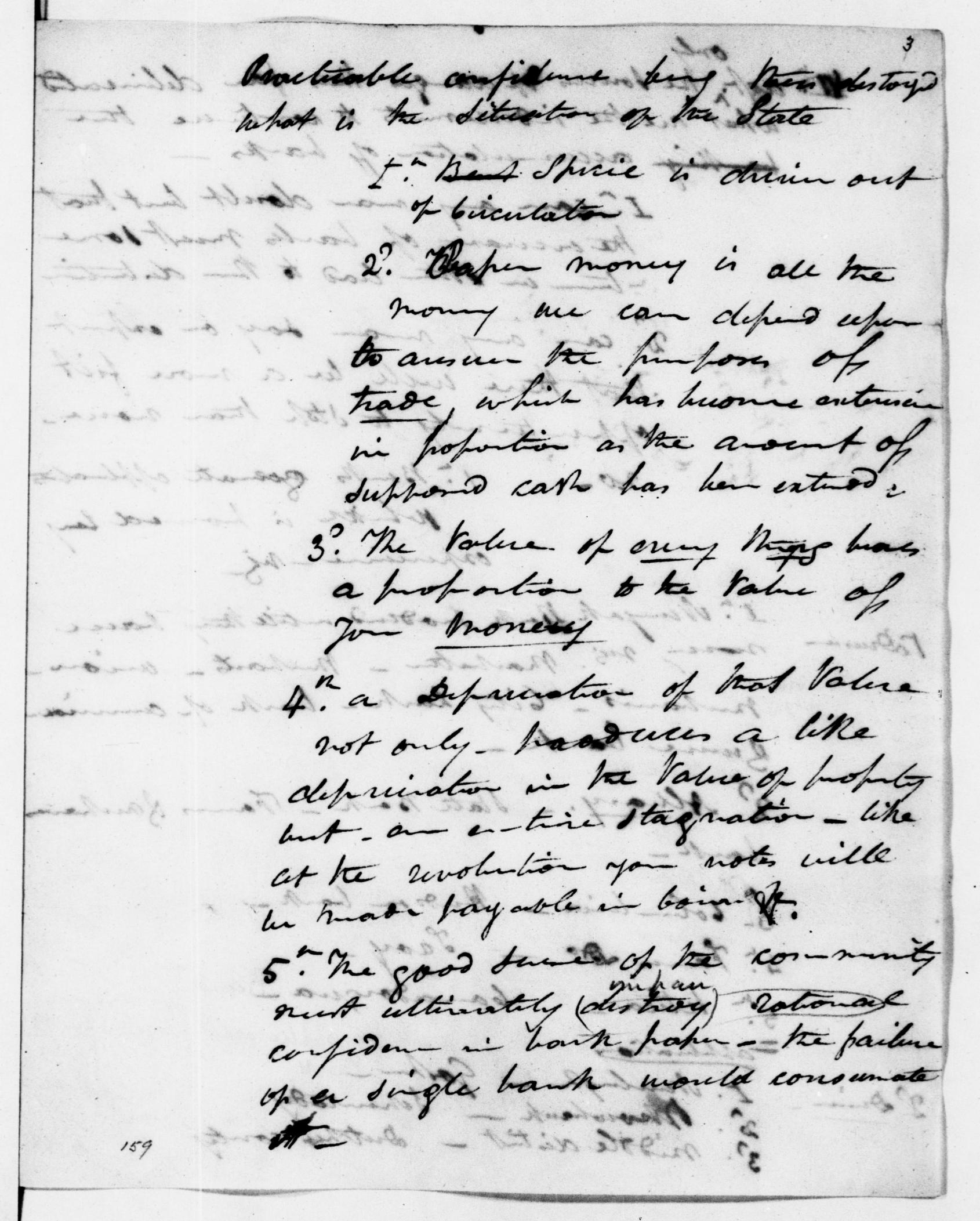 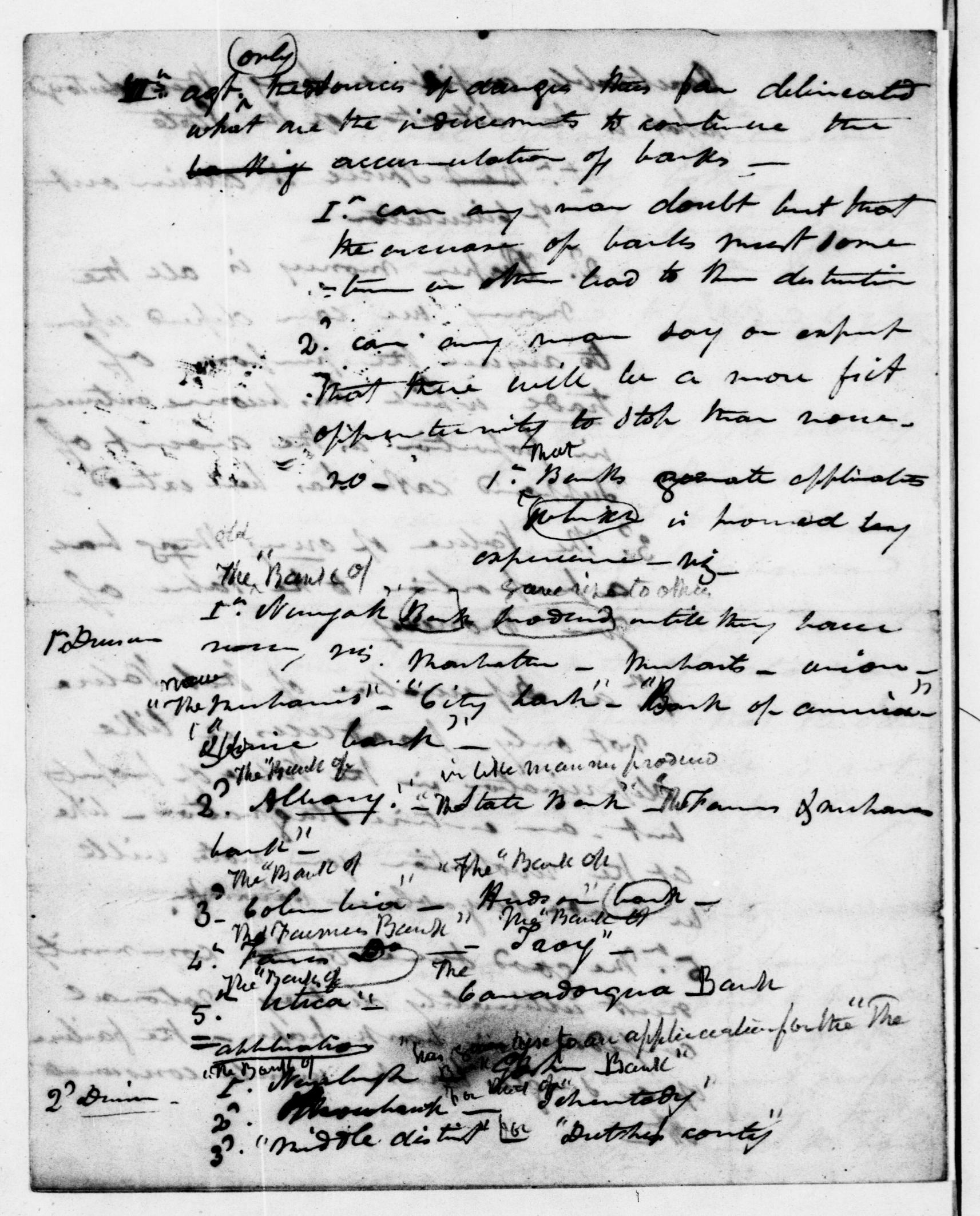 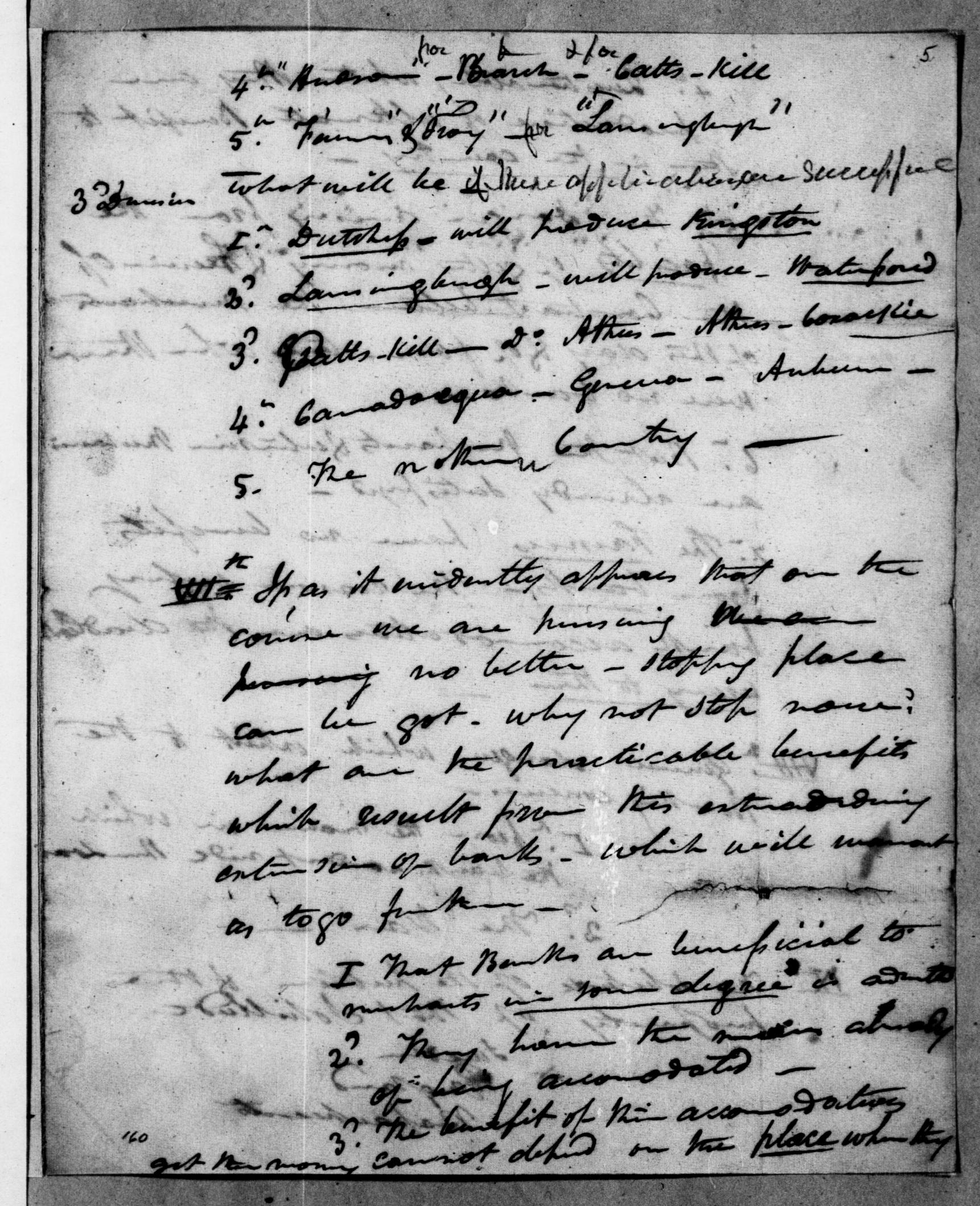 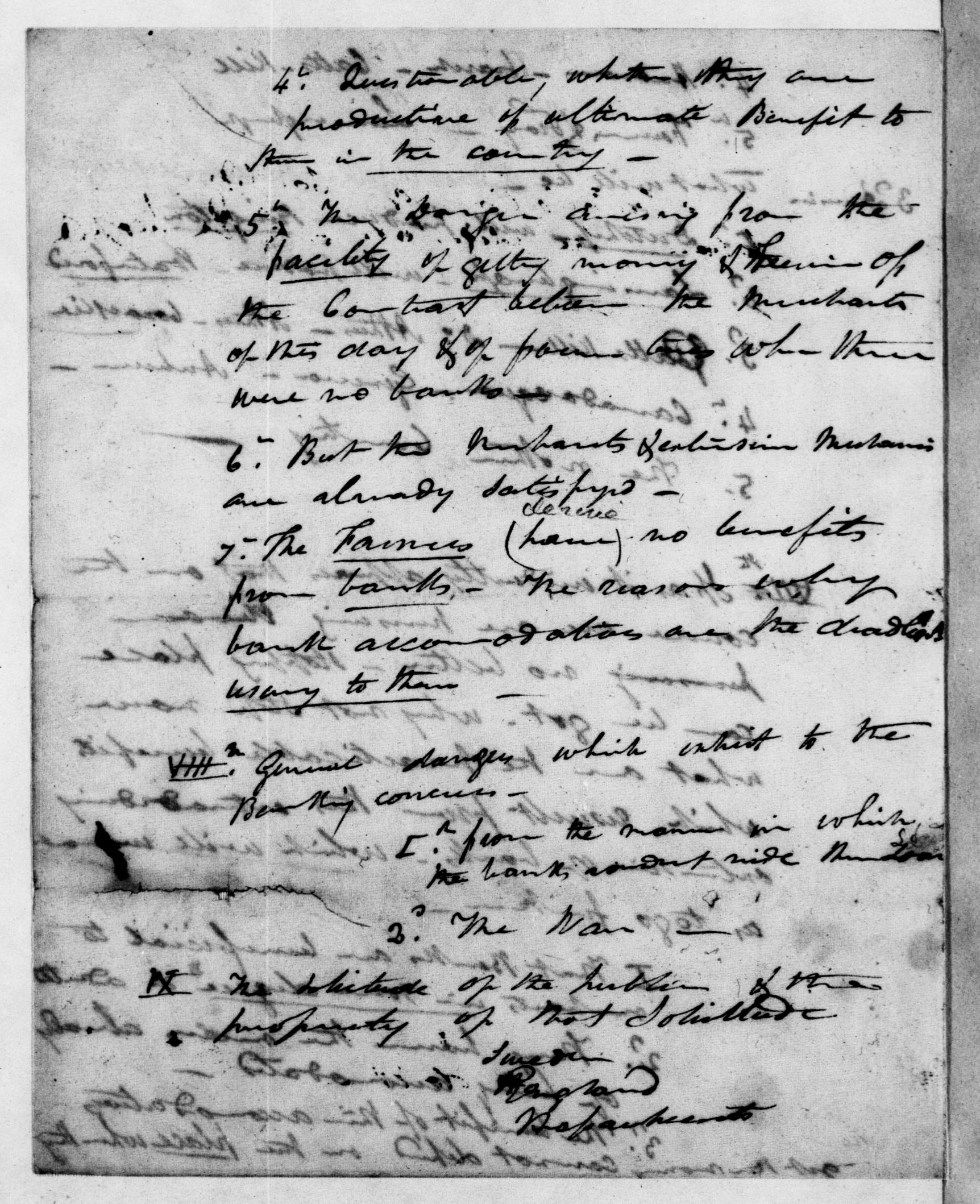 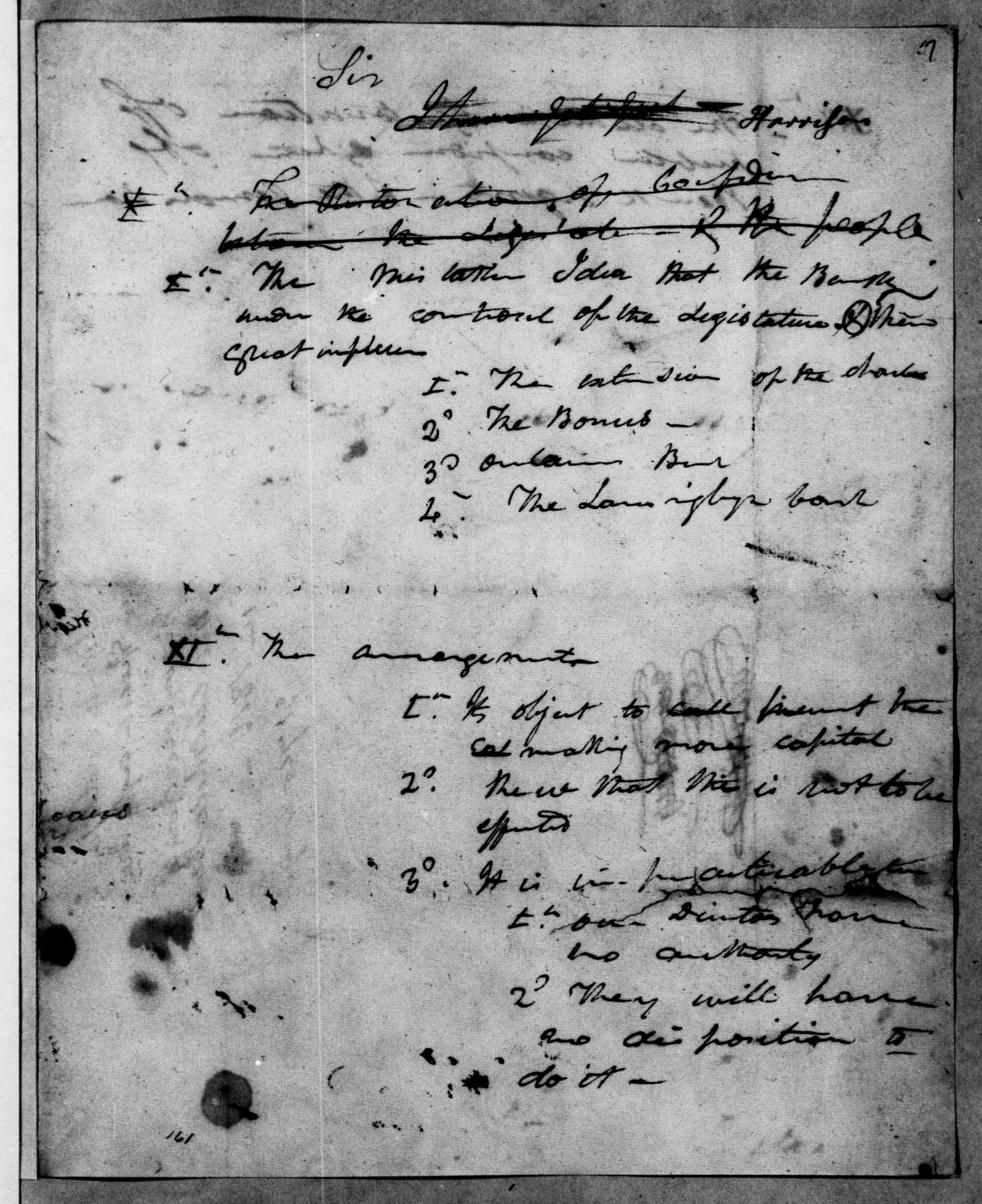 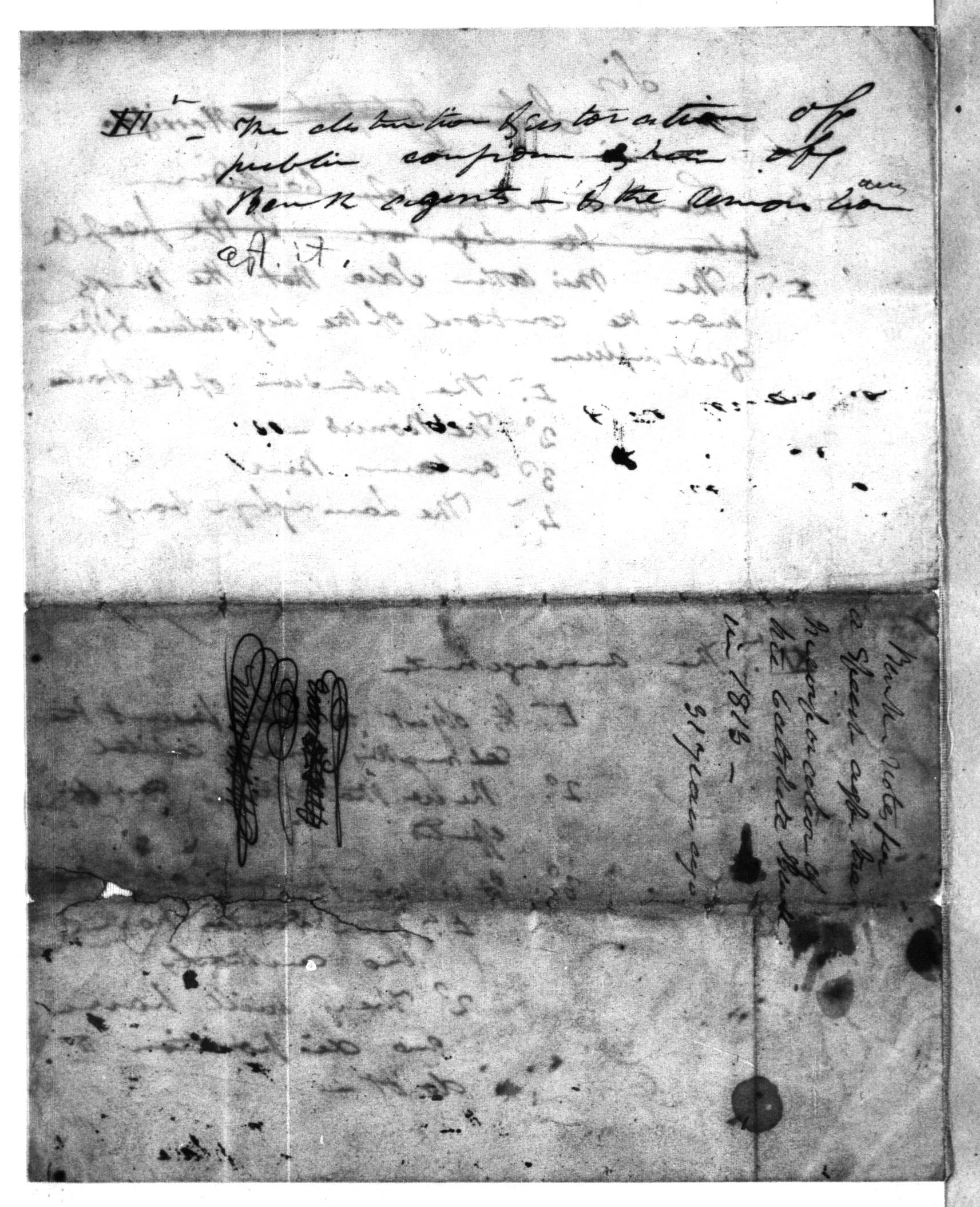