Abrm. Van Buren says, That he understood that a Possession had been taken by Abrm. Vosburgh, Martin Van Buren & Barent Vosburgh of Lot now occupied by James I Van Alen & others the disputed Premises and where Jack now lives about two hundred yards north of where Jack now lives, when they went <illegible> to the south of west to the Hill near fly <tack> in Land Van Vlek now owns

He says that about $30 years ago or more he heard from understood from Peter Vosburgh & Barent Vosburgh, that as that they had exchanged = Abrm. Vosburgh ^Peters father^ owned Land on Vallaties road near fly and Barent <passed> adjoining his Land. "That Barent Vosburgh gave his Land adjoining his, for the Land now occupied by Jas. I Van Alen near <Offstack>, on the <illegible> <thinks> that the disputed ^premises^ P[e]ter Vosburgh had a turnip patch some years ago, he does not know how long.

Tobias D Van Buren – he knows ^says he understood^ that Barent Vosburgh, Abrm. Vosburgh & MVan Buren to Possession as described by AVan Buren =Abrm. Van ^Buren^ had occupied one <pace> under Possession =he saidys that between 20 & 30 years ago. He knows that [family] of the <Sons> of Peter Barent Vosburgh made fence along the road near <Osborne> drag and joined the Land of Abrm. Van Alen.

= 2d. About 40 years ago Barent Vosburgh Father of Cairs. & Peter Vosburgh Brother of Defts divided the land of old Peter Vosburgh on which division the said Peter & his Brother took the premises in question.

3d. The say that since that division we have have been in possession of the premises & will give Evidence of diverse acts of ownership since that Period

4th. The premises are bounded on the north by a Lot which Defts have cultivated for many <yrs> 40 years, West by Abrm I. Van Vleck south & east by Abrm. Van Burens Land & the Valitie road & we will prove that the fence which Defts had round their Lot on the north included these premisis, & was so kept up except when the same ^Lot^ was suffered to lay open.

5th By Abrm. Vosburgh that about thirty years ago Defts. had Turnips on the premises & cultivated the same.

Ist. under Jacobus Van Alen whom Sale they prove in this Way

Ist. That Barent Vosburgh owned it in his lifetime this was the Brother of Defts Father.

IId That by his Will he devised his Estate to Cornelius

IIId That on a Judgment agt. Cornelius his Estate was sold & Van Alen bought it

IId. under John I Van Alen Junr. who claims

Ist. under a Deed from Cair. Vosburgh subsequent to the sale of his property.

IIId. under Isaac I Van Vleck who claims

IId. under an Acknowledgment made by Defts. to him.

2 Cornelius devised of Barent took possession under the will ^& continued^ until 1789.

3d. A deed from Cornelius Vosburgh dated 8th June 1789 (consideration £10) to John I Van Alen Junr., who entered into the possession to be proved by Abm. Vosburgh & Abm. Van Vleck.

4th. The entry of Isaac I Van Vleck ^& Henry C Vosburg one of the Citizens^ who by past contract purchased of J. L Van Alen Junr., to be proved by Abm. Van Vleck & Cornelius Van Schaack. Van Vleck has seen J I Van Vleck clear one corner of the land.

5th That the Defendant upon an ^the^ application of C. Van Schaack admr. of Henry C Van Schaack admitted, that he had rented the lands of Van Vleck & Van Schaack for one year, but said he then held it under another title. By David Van Alen the same as to the tenancy under Van Vleck & that he would deliver it to J L Van Alen Junr. the <same> as Van Vleck had it of him (Van Alen.)

6th. Disclaimer to be proved by DVan Alen.

Possession in Defendant by A. Van Vleck.

Abm. Vosburgh will prove Possession in his uncles 29 years ago. That he <Recd> brot. Dung in there for his uncles. That they had it in fence, that his uncles had it in Possession ever since

Barent I. Goes. The same as Abrm.

2d notice to quit necessary only when it expired 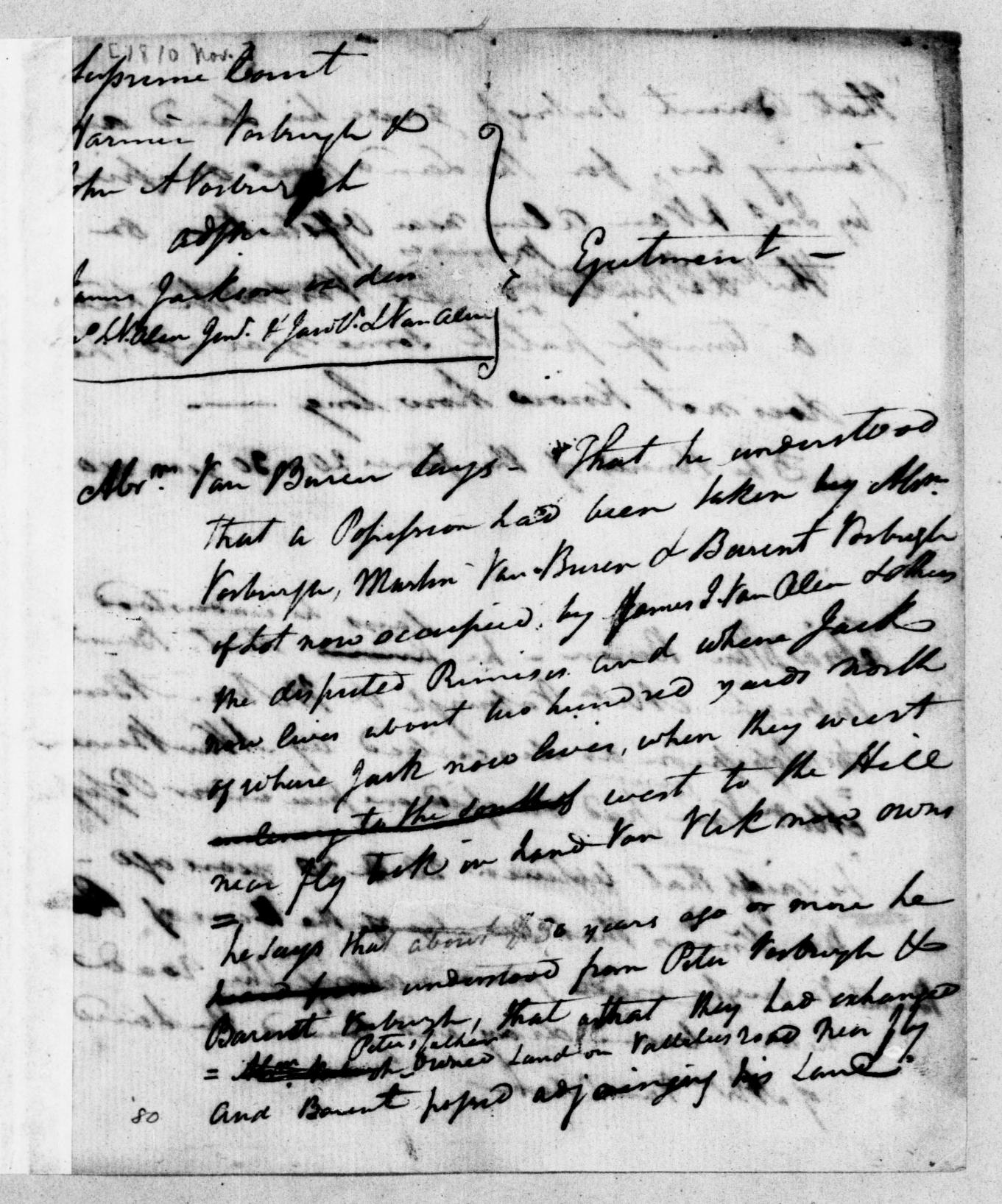 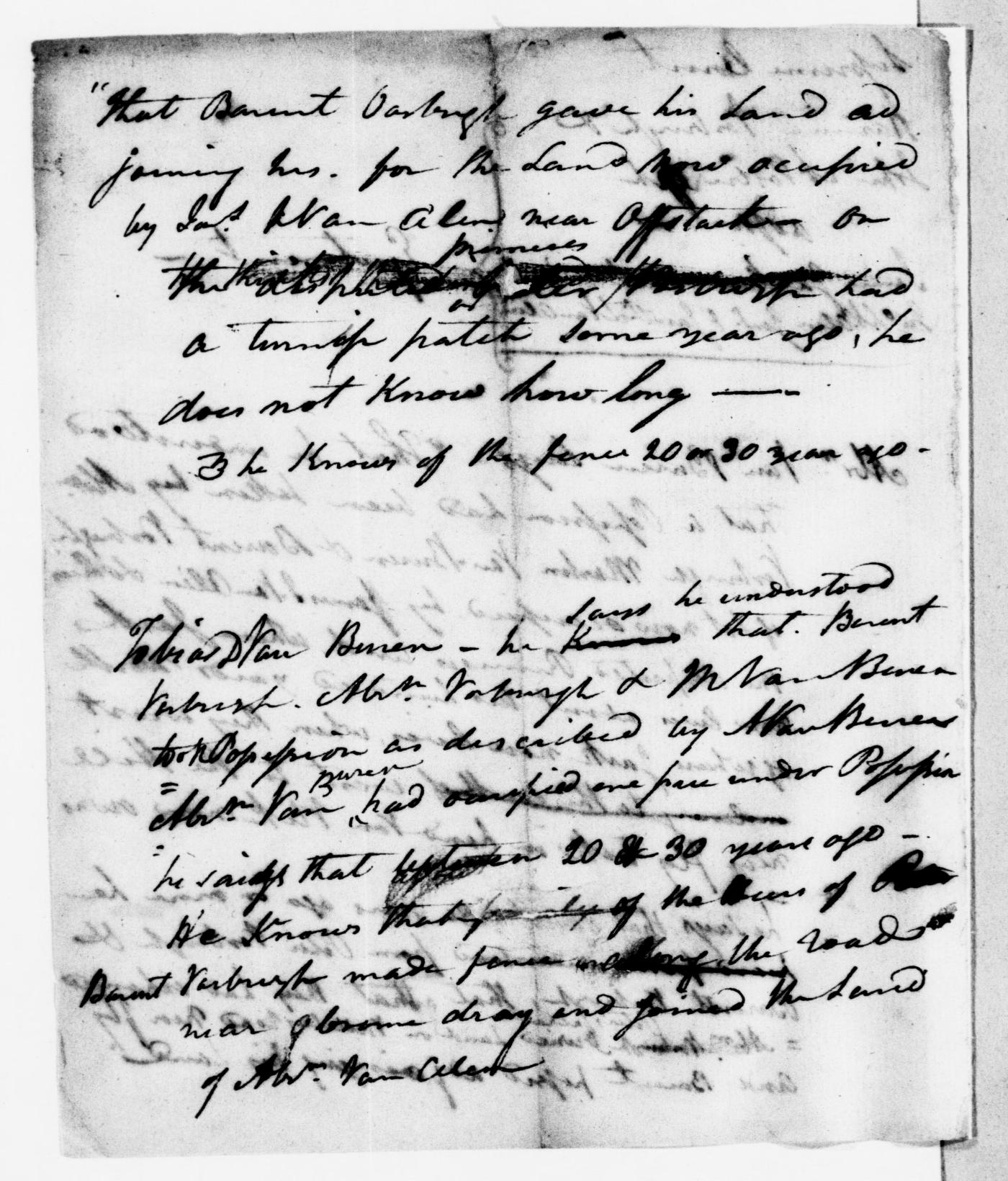 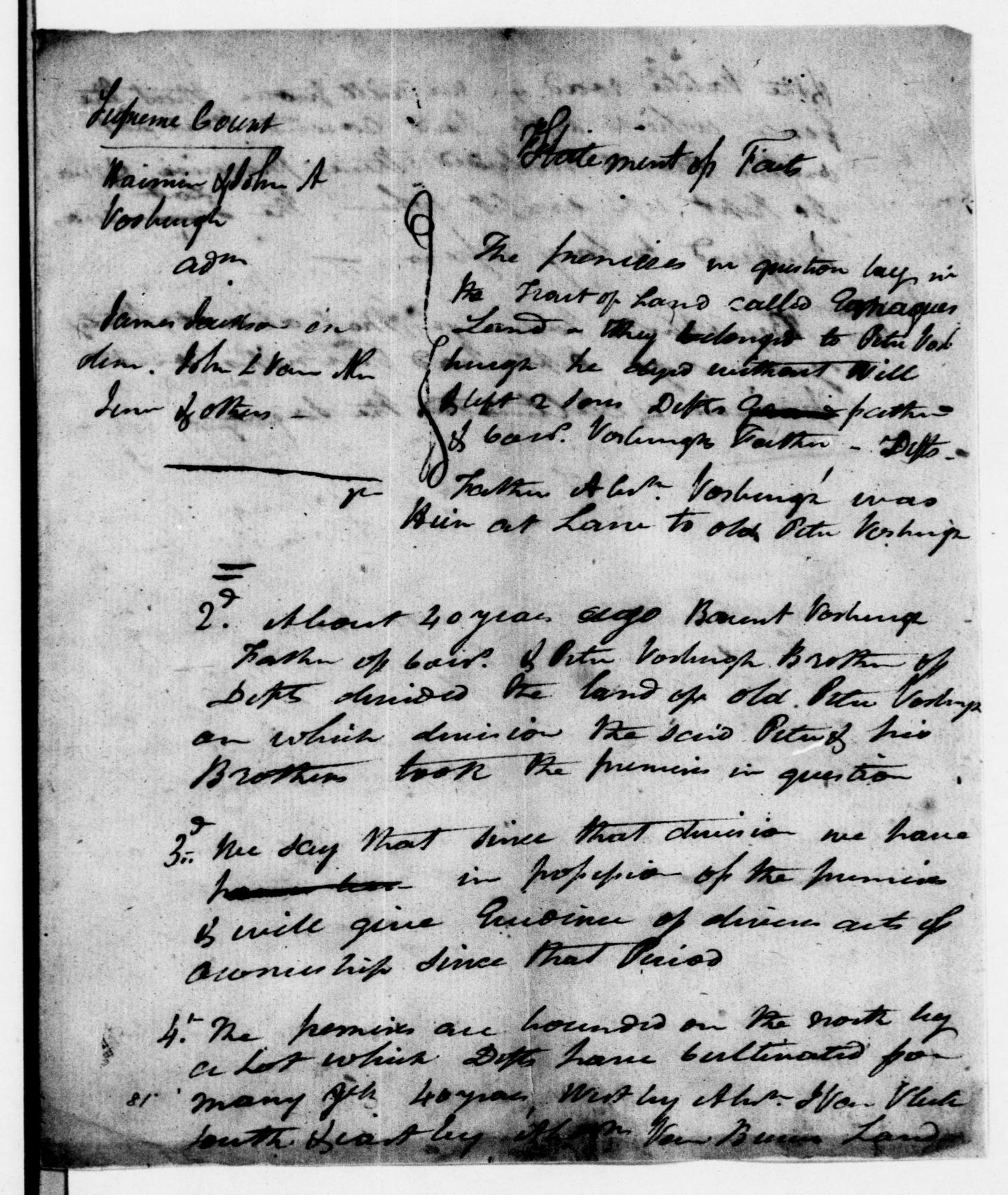 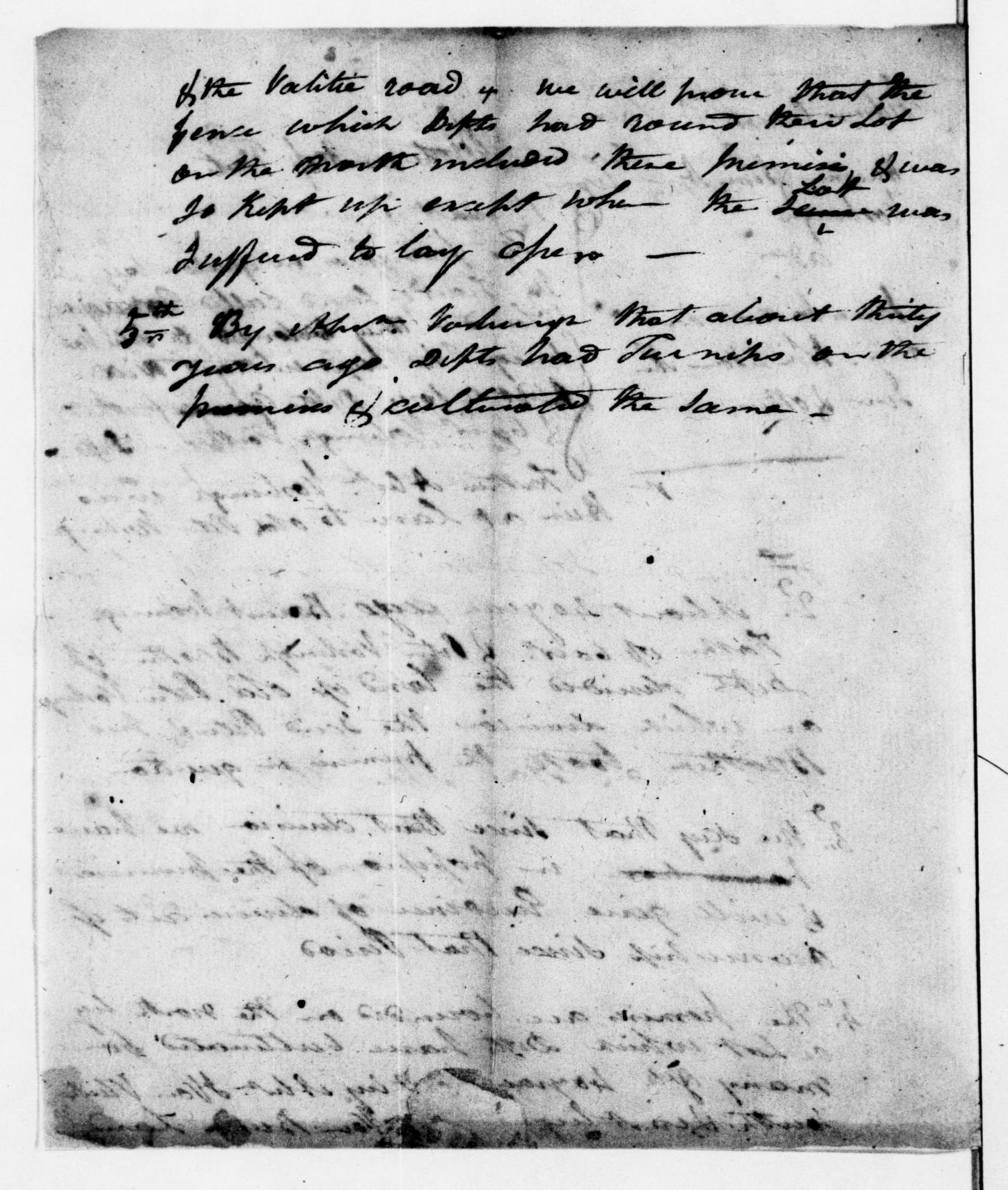 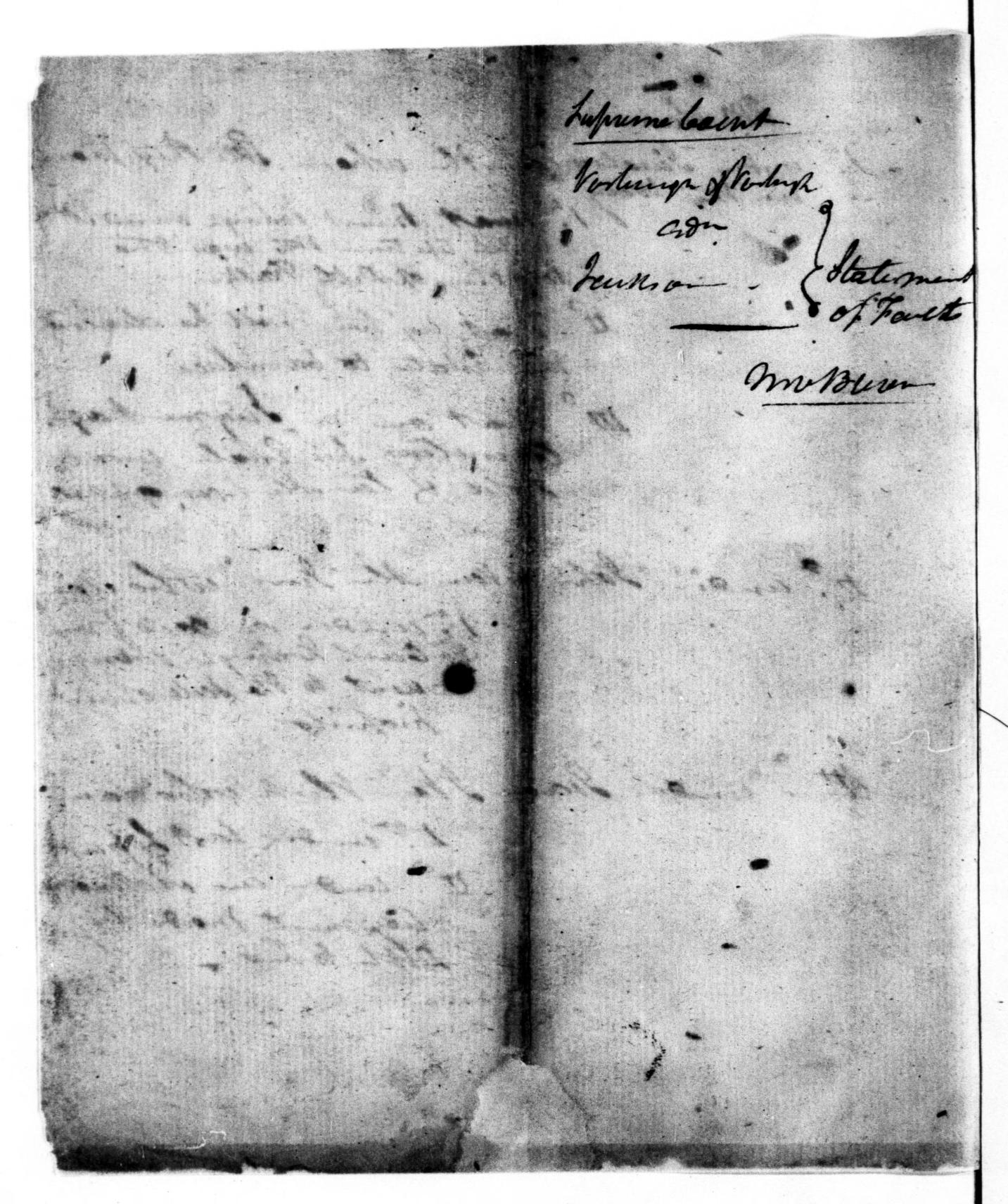 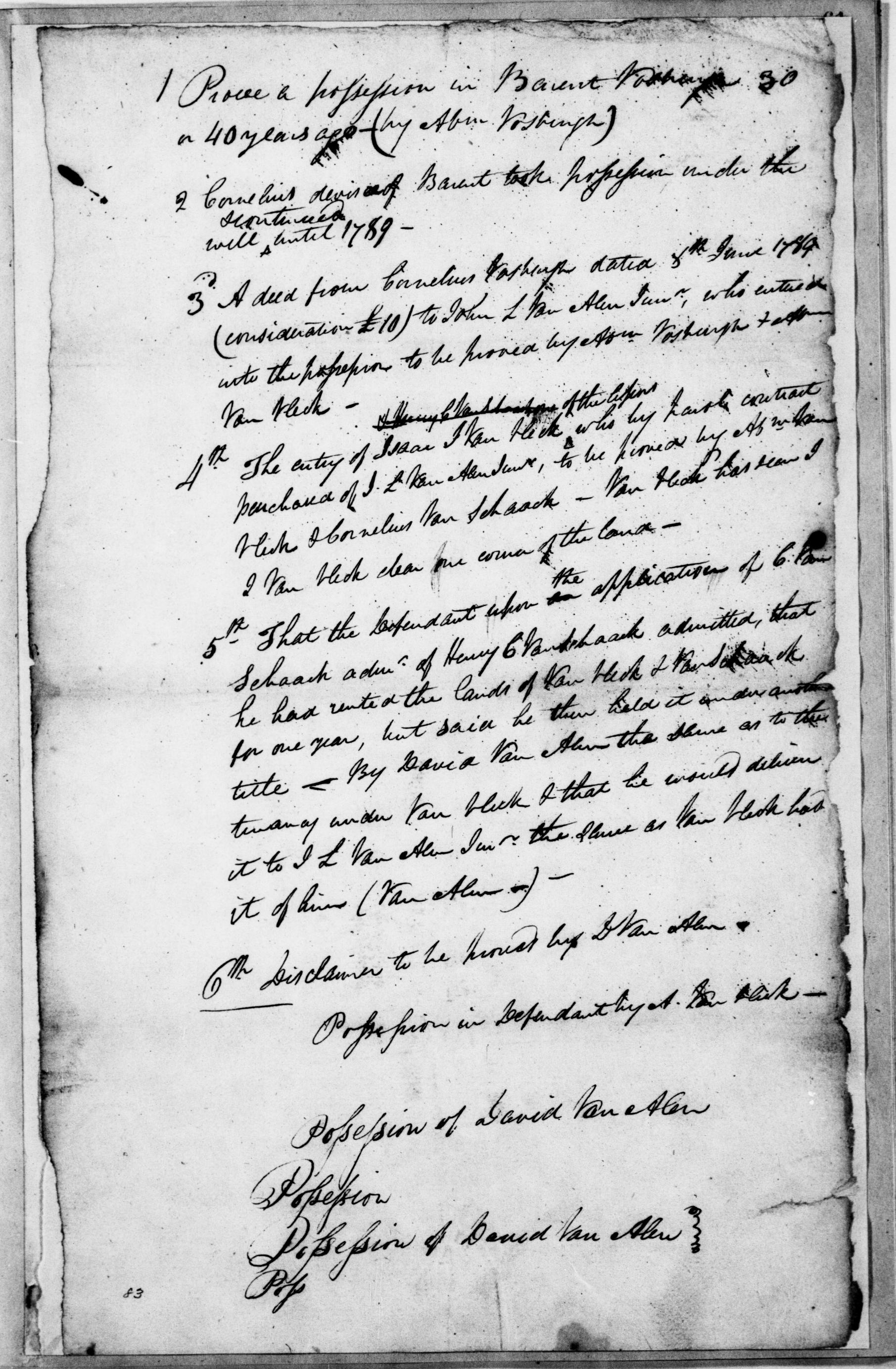 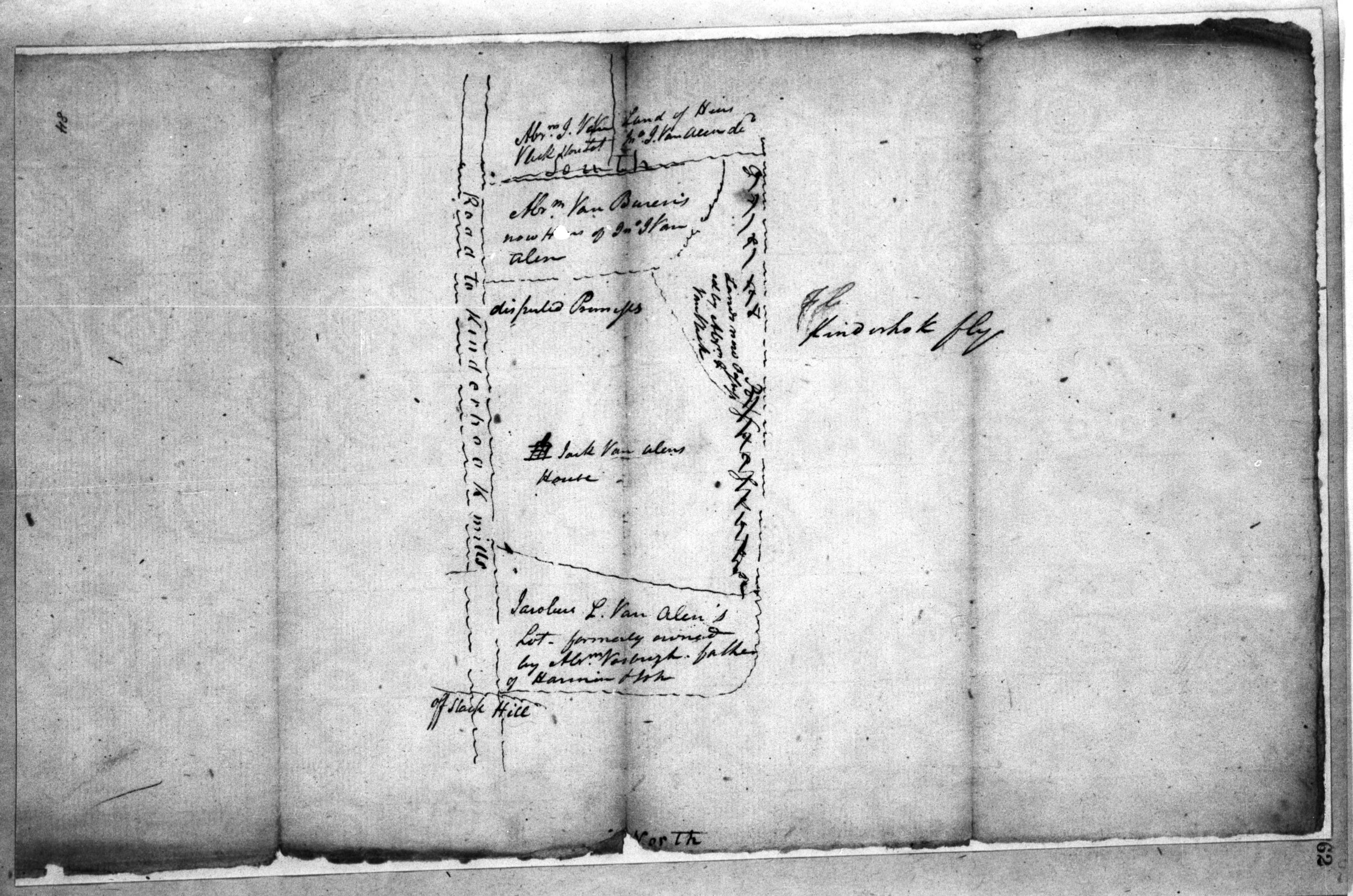 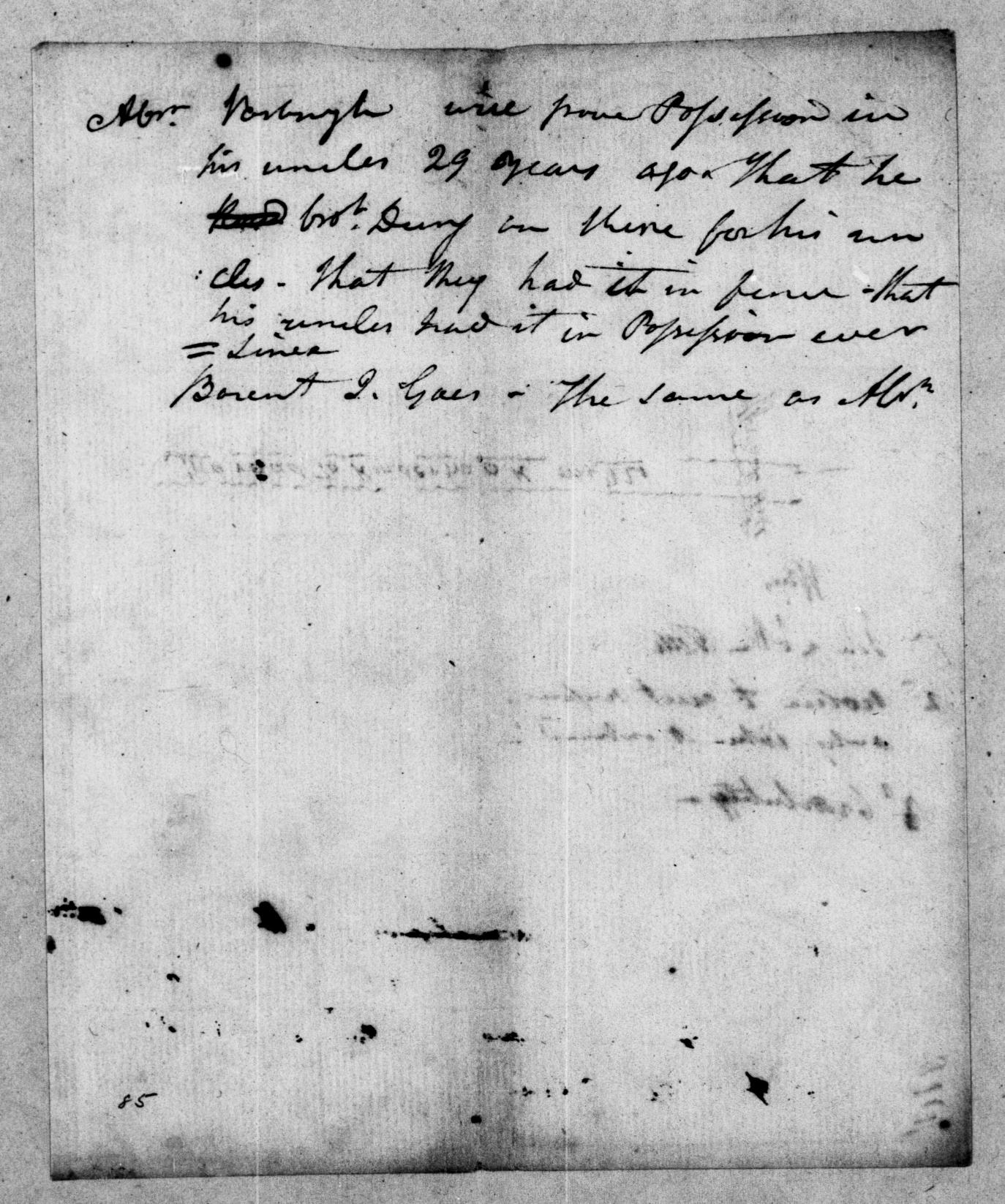 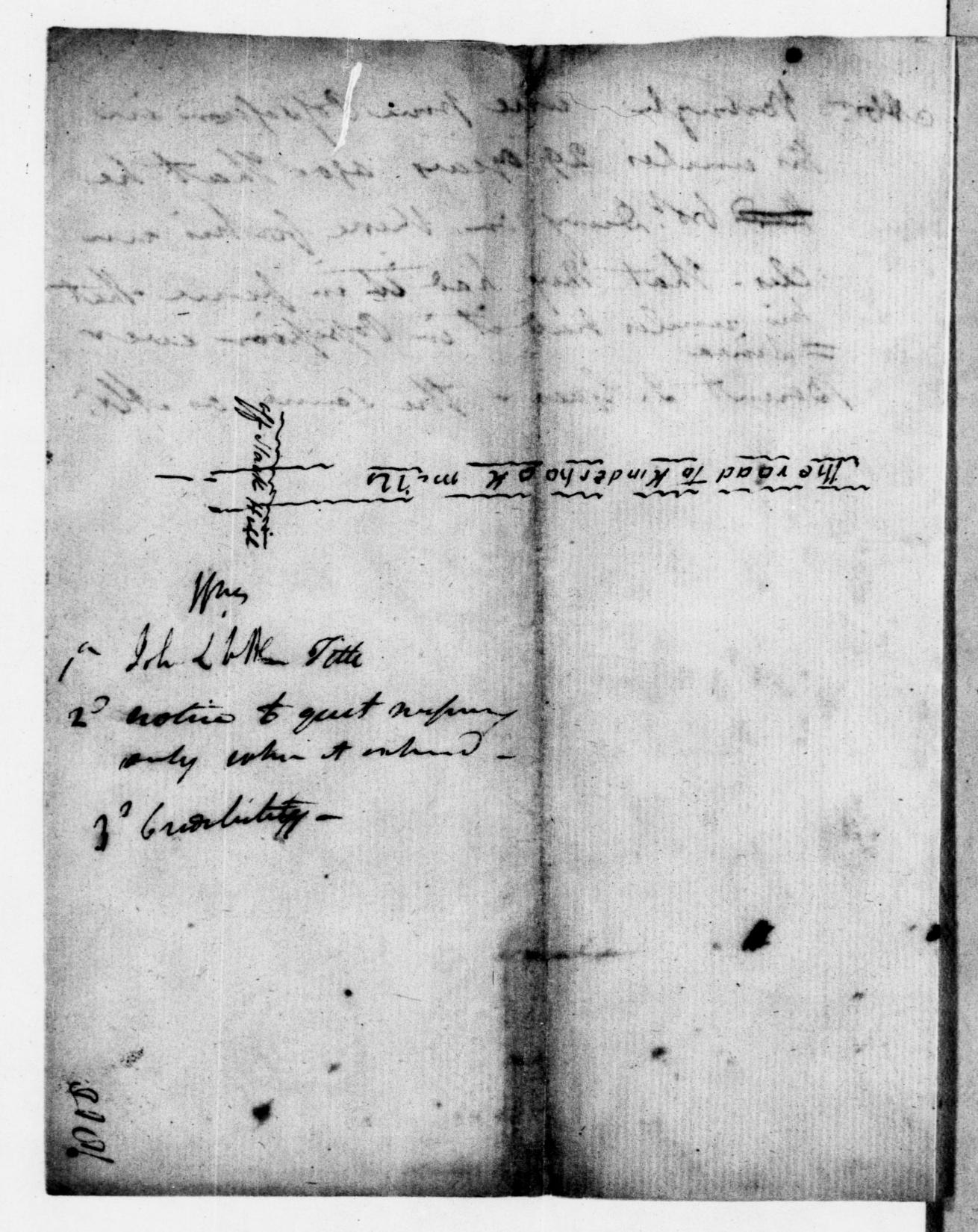