I Received a Letter from you sometime ago upon the subject of the ensuing election, but have been prevented by absence from home from answering it.

The Sentiments of liberality and magnanimity which it contains are such as from a knowledge of your Character and ^the^ qualities of your heart I had a right to expect and did expect. Feeling Possessed of strong personal prejudices for Mr. Burr and feeling a pure and disinterested affection for some of his most intimate friends and firm supporters amongst whom it is with honour to myself ^pleasure^ that I count ^name^ you as first in my esteem. The Question ^Controversy^ which arises ^exists^ up[on this] momentous occasion was ^was^ to me of [. . .] delicacy.

Upon the most matur[. . .]passionate reflection ^however fully^ I may am, Impressionsed are ^with the conviction^ that the support of Col. Burr would not at this time ^under existing circumstances proper or <be> at this time^ be expedient and in giving this opinion to you, I wish to be understood, that ^as not at all embracing the truth or falsity of the Charges^ I do not conceive myself called upon, ^that question^ nor do I conceive myself as at deciding upon the Charges which have been exhibited against him, and knowing as I do the purity of my Intentions and motives I feel persuaded they will never prove as source of Dishonor to m myself or regret to my friends. I might enter much more minutely into the grounds upon which my resolution has been formed, but as a Discussion of this subject cannot now be productive of one salutary Consequence I forbear. I flatter myself t[ha]t a difference of opinion on this subject will not ^at^ all affect ^impair^ the friendly relations which have heretofore ex ^subs^ isted between us, for my part I can say it will not. If however ^contrary to my most confident expectations such should be the Case regret on my part should would be the only consequence^

My Brother & myself have received much abuse from your friends in this Town, in their illiberal ^&^ unmanly remarks ^with respect to me^ your name has been made use of I am confident unauthorisedly. My honest attempts to check the fury of Mr. [Burr’s] enemies, are now pretended to be construed by some persons who then sanctioned and authorized the attack on Mr. Burr & his friends ^in all its parts^ into duplicity. My hearts acquits me of the charge and I rest contented. They do not however by Conduct of this kind promote Mr. Burrs views Election in the place. Most men are not to be scolded out of their opinions. I hope you will excuse this scrawl I write in great haste, as here[tofore] 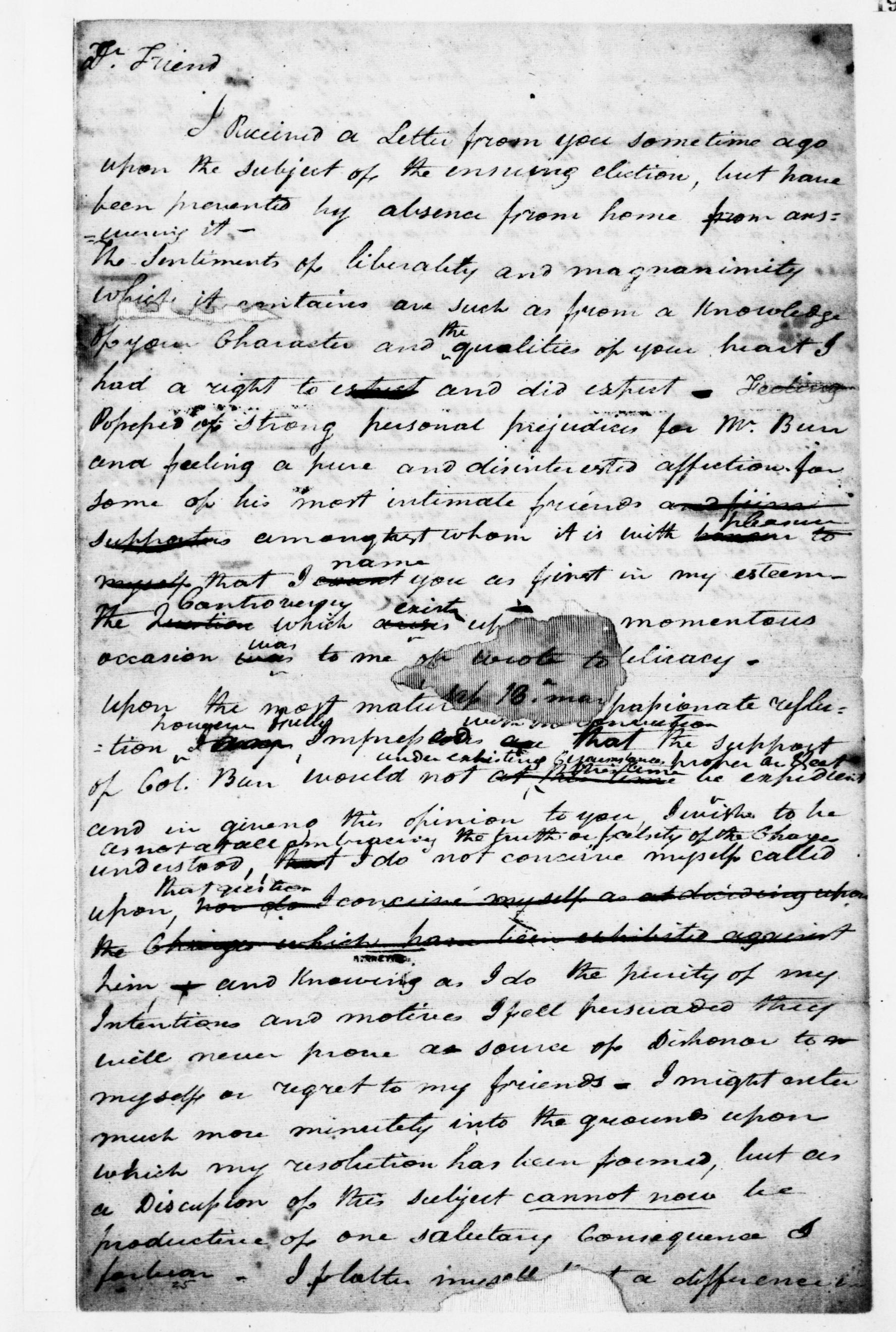 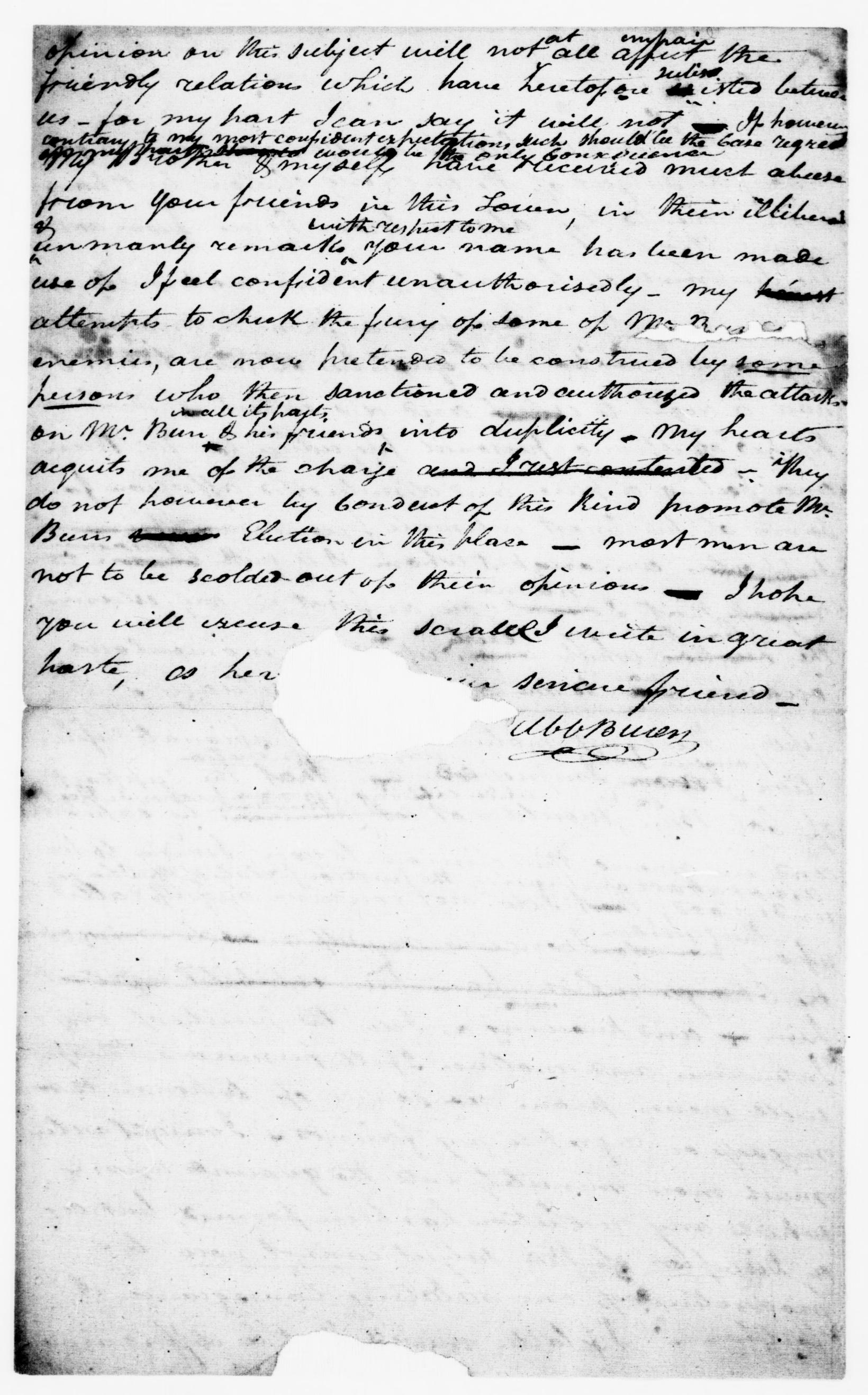 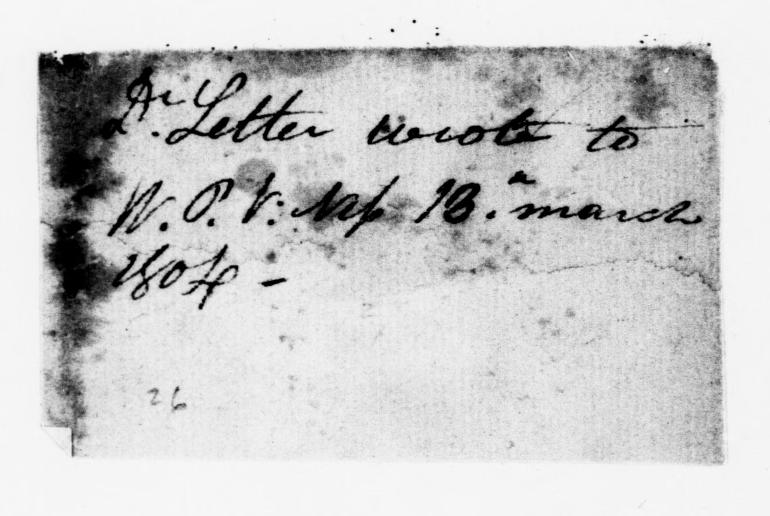