We this day lay before our readers a document of deeper interest-one which, from its nature and probable consequences, is more eminently calculated to test the character of the American People, and to probe the foundation upon which their political insitutions are based-than any which has appeared amongst us since the declaration of the late war between these United States and Great Britian. We shall at once be understood as referring to the Report of the Committee of Investigation, and we would blush for the virtue and intelligence of our countrymen, if more than a mere statement of the case were necessary to satisfy them that we do not attach to the subject a degree of solemnity and importance to which it is not entitled. And what is that case? An institution, springing out of its supposed necessity as a fiscal agent of the Goverment, and which, without that impression, would be regarded by all as a palpable violation of the consitution—has, on the sole ground of a unwillingness on the part of the People, and two branches of the Goverment, to continue its monopoly, made an attack upon the supremacy of the popular will, and by consequence, upon the liberties of the People, which, if sucessful, would be equally fatal, and far more dishonorable, than if those liberties had been cloven down on the field of battle. Reposing on the authority and sancity of law, Congress, in creating the Bank, improvidently clothed that institution with powers which, in the language of Nicholas Biddle, placed all the State Banks in the country-State Banks which supply four-fifths of its circulating medium, and in the security are involved the fortunes of thousands and tens of thousands of its citizens-entirely at its mercy; and which, experience has shown, placed also the commercial operations of the country, for the time being, in a very great degree, under its control.

To guard against the abuse of these immense powers, as well as for the security of the Goverment in regard to the one-fifth of the capital owned by it, various, and as it was supposed, effectual checks over the proceedings of the Bank were, by the charter, reserved to the President of the United States and to Congress. Among these were the appointment of a portion of the Directors of the Bank, responsible to the Goverment, and, as was intended, wholly independent of the Bank, together with a right to examine, without reserve, its books and proceedings, at the pleasure of Congress. These safeguards, which were provided with so much care, have been gradually undermined, and are now upon the point of being finally broken down by this audacious institution. Having reason to apprehend the most odious practices in the administration of its affairs, the President called upon the Government Directors for information, and a scene of iniquity is disclosed, which offends the moral sense of this community, and is publicy denounced abroad, as transcending, in point of private and political immorality, the most profligate of any of the political transactions of the most corrupt of the Governments and institutions of Europe. And what is the consequence? Are all the branches of the Government influenced, as they ought to be, by a just detestation of the conduct of the Bank, and zealous in their co-operation to arrest its encroachment, by the use of the means which the charter has, for that purpose, placed under their control? Far, very far from it! The faithful officers who have sounded the alarm, are, on the contrary, denounced as spies-the Bank finds increased favor in the eyes of the Senate of the United States-the Government Directors are proscribed by that once august body, and the public are left to infer from its acts, that silence, in regard to the conduct of the Bank, is an indispensable duty on the part of the Government Directors.

A blasting mildew is suddenly brought upon the business concerns of the country, and a prostration of trade and credit, to an extent supposed to have hitherto unknown, is by some means effected. By those whose leading object is to destroy the present administration, it is attributed to the act of the Executive in removing the deposites from the Bank of the United States to the State Banks; whilst on the other hand it is insisted upon, that the evils complained of have been principally occasioned by the criminal machinations of the Bank of the United States to obtain a renewal of its charter. To settle this great question-to bring the truth to light-to disabuse the public mind on the one side or the other-to ascertain, "as far as practicable, the cause of the commercial embarrassment and distress complained of by numerous citizens of the United States in sundry memorials which have been presented to Congress at the present session; and to inquire whether the charter of the Bank of the United States has been violated, and also what corruption and abuses have existed in its management; whether it has used its corporate powers or money to control the press-to interfere in politics or influence elections; and whether it has had any agency, through its management or money, in producing the existing pressure,"-a Select Committee was appointed by Congress, under the authority reserved to it by the charter of the Bank, to inspect its books and proceedings and report theron. So palpable had the necessity for this examination become, that, on the motion for the appointment of the committee, that was seen which had not before been witnessed during this stormy session, an almost entire disregard of part division, and the resolution adopted by the extraordinary vote of 174 to 41. The committee thus appointed, repair to Philadelphia to execute the trust reposed in it-and what has been the result? Upon pretences the most flimsy, and under disguises the most palpable-pretences and disguises which it would be an insult to the understanding of the American People to deem it necessary to demonstrate-the power of Congress is boldly, recklessly, set at defiance, and an attempt made in the face of the whole country to raise the government of the Bank over the head of that of the People.

Upon this brief and simple statement of the case, the question arises-and it is, in our humble judgment, a question pregnant with the fate of the Republic-how is this high-handed and unprecedented act of the mere creature of legislative authority to be received-how treated by the Goverment and People of these States? If passively, and without successful resistance, the former will be virtually subverted, and the latter forever dishonored.

These are grave consequences. But they are, we think, not less true than grave. It was a favorite opinion of Mr. Jefferson's, that ours was the strongest government on earth, because it was the only one where every man, at the call of the law, would fly to the standard of the law, and meet invasion of the public order, as his own personal concern. We cannot see how the truth of this position can be well put to a severer test, than that which is afforded by the events of which we are treating. The goverment of the Bank, after a series of gradual and regular approaches, has at last mounted the breach, and bearded the Government of the People in the very citadel of its strength-the House of Representatives. The contest which is forced upon the People by this daring outrage, is one in which it would seem to us, upon every principle of honorable warfare, there can be no neutrals. Every American citizen-whatever his condition may be, or whatever his past opinions on the general subject may have been, whatever he may think as to the necessity of any such institution-is now driven to take his stand either on the side of the Government, or on the side of the Bank. If, two years ago, any one had had the temerity to suppose that the audacity of this institution could ever have reached this point, he would have been laughed to scorn. No well-regulated mind will for a moment believe that such things could have been, but for the countenance which the Bank has received from men in high places, and heretofore high in the confidence of the People. The question is, shall these things continue, or shall they be made to cease, by the indignant voice of an insulted nation?

We repeat our deliberate conviction, that we cannot see how any man, who does in truth possess an American heart-a heart which beats for his country-can hesitate in the expression of his detestation of this conduct of the Bank, or in lending a helping hand to rid the country of it, whatever may be the expense at which that great object of national interest and national honor is to be accomplished.

Copy in unidentified hand enclosed in Montgomery Blair to MVB, 4 November 1859, DLC. Images from this copy are included below. 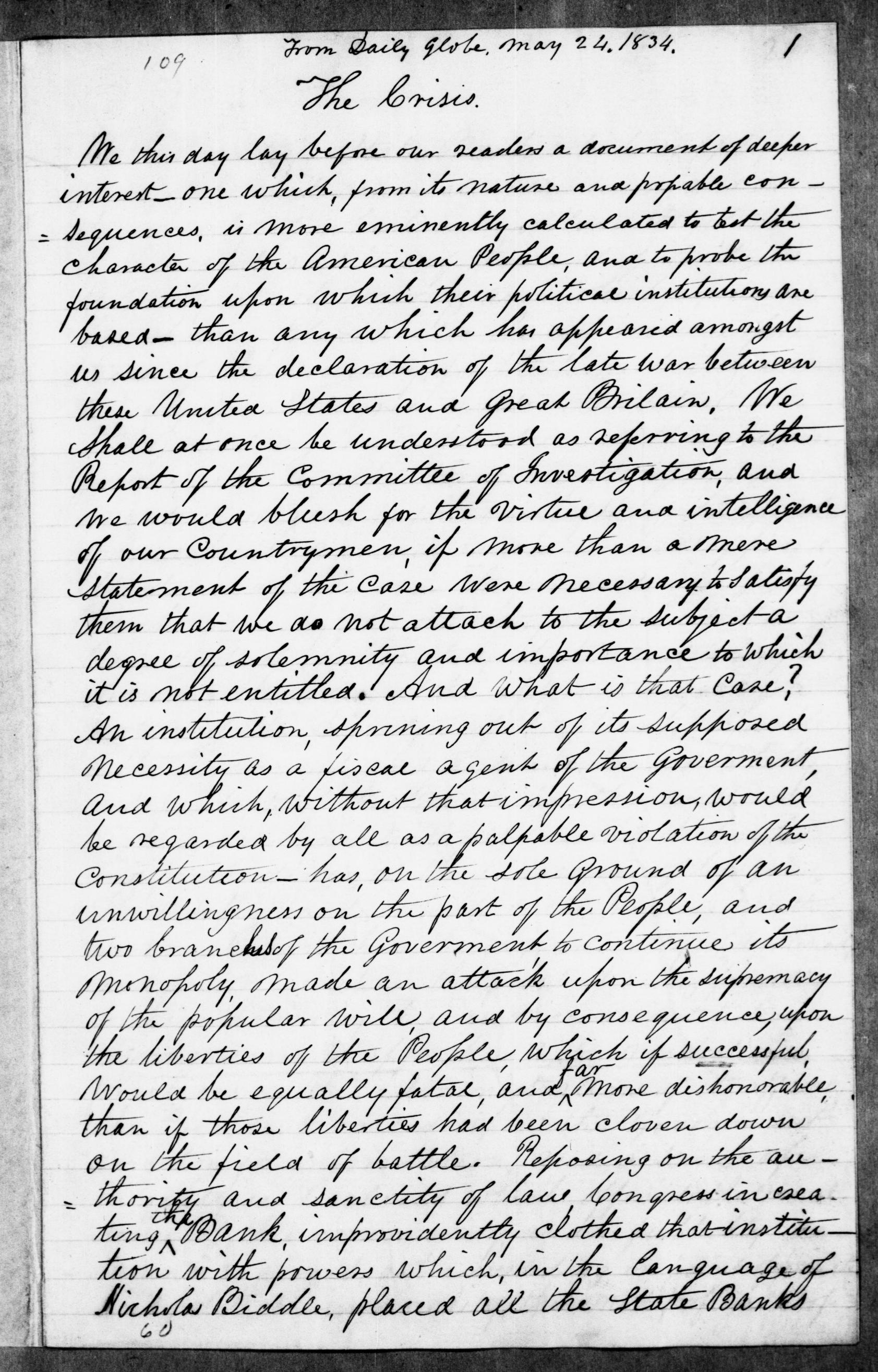 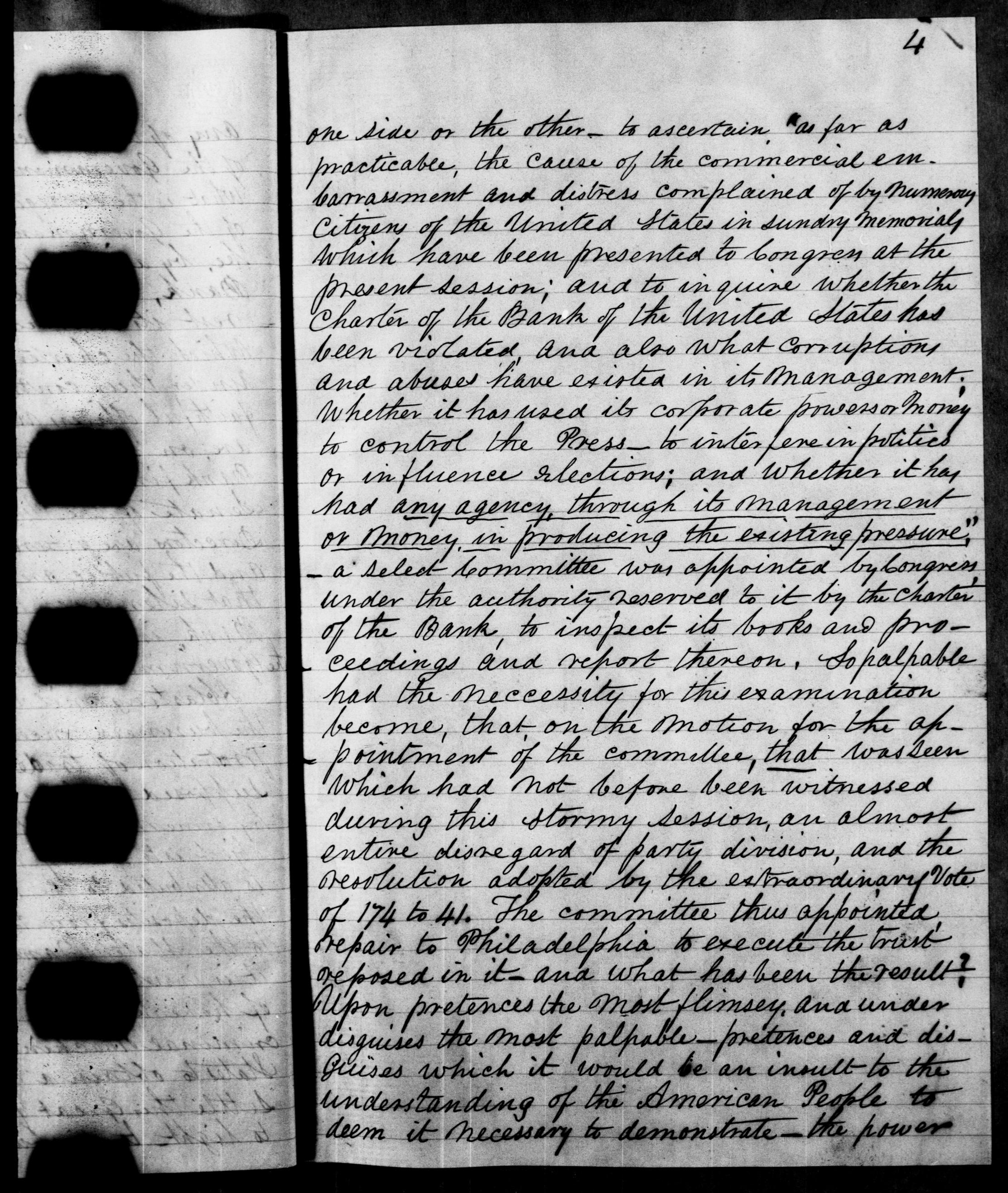 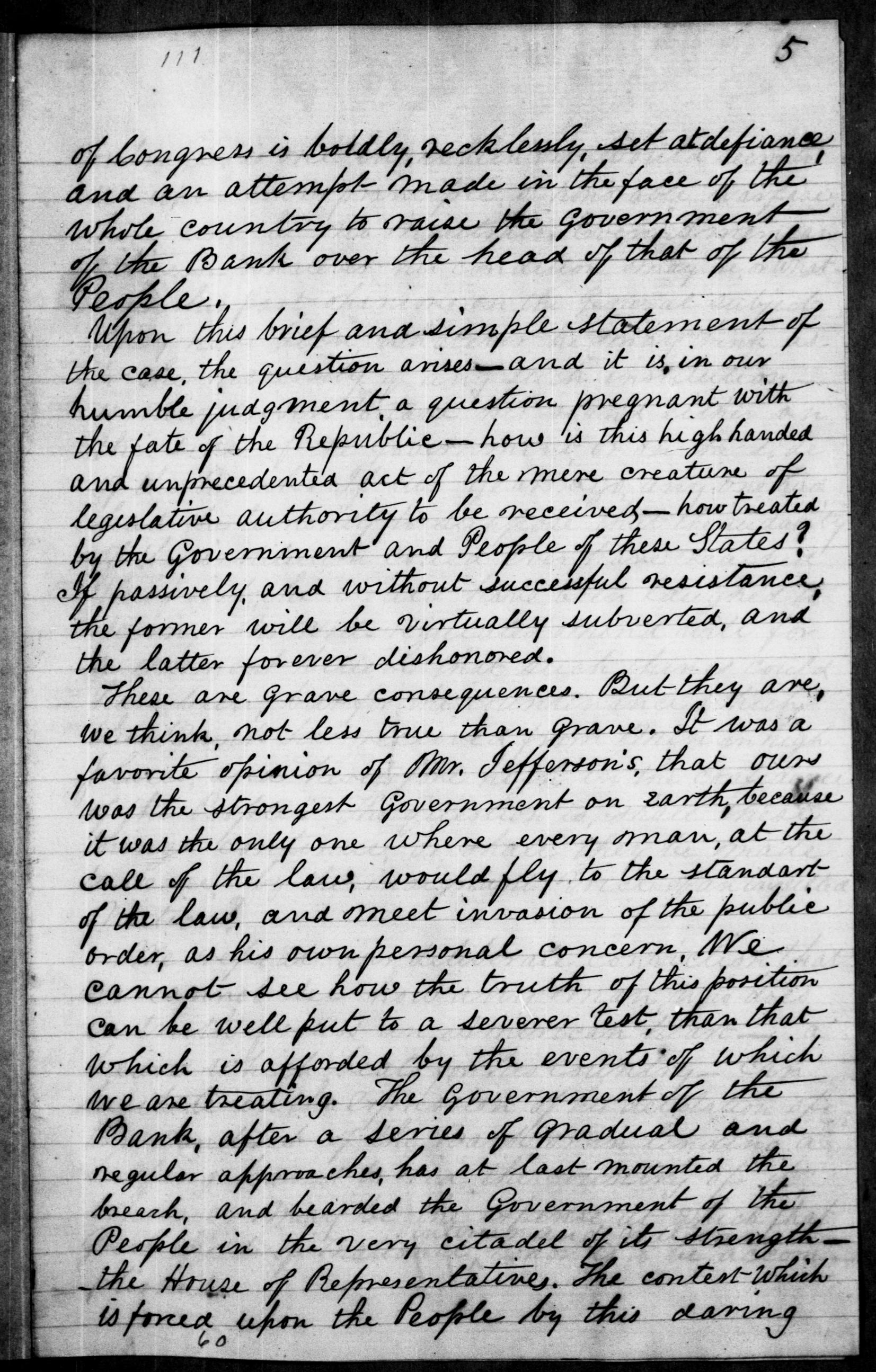 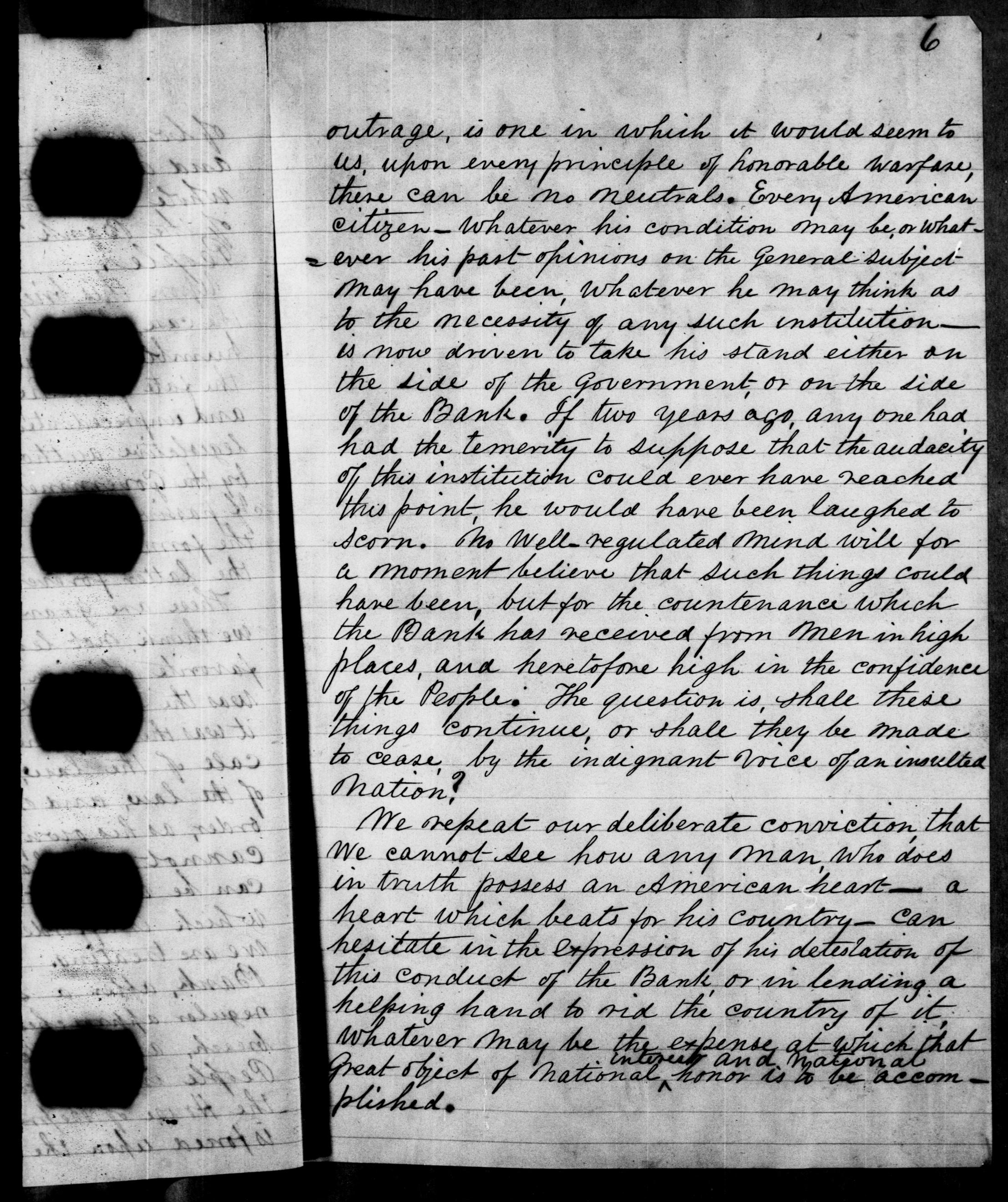