Proceedings of, and resolutions adopted at, the meeting of the citizens of Upper Mount Bethel, Northampton County, Penn., 22 February 1834

At a respectible meeting of the Citizens of Upper Mount Bethel, Northampton County Pa on the 22d Feb’y, John R. Chambers in the Chair & A.P. Long Sec’y. It was resolved: That Jacob <Utt>, Francis Hagerman & Jacob Lamb Esq’rs, be a Committee to report to this meeting, the best expression of the Publick feeling, in this vicinity upon the measures of our Gen’l Gov’t

The Committee soon made the following report, which, was adopted.

We are friends to the Union & <illegible> of the States; To our Gov’t as now administered. The “Roman Spirit” of our Chief Magistrate is what we looked for, from the Prophick Prophetick words of our Jefferson, as expressed <illegible> his last moments. The Administration meets our approbation. Though we doubt not he administers the Gov’t in perilous times, we doubt not; nor do we doubt ^nor do we <illegible>^ that he will conduct the “<illegible> of State safely,” so long as he may “be at <Labor>”.

We have also confidence in the distinguished Individual, who now occupies the second post of honor, in our Country. We have watched his political career, & see nothing in it requiring censure or reproach. Some of us have known him early in life, & have tested the purity of his Democracy. <If>, shafts have been thrown at him, they have been thrown at a mark which has the power of warding off its own dangers.

We, therefore, Resolve, that we perceive greater danger to the Liberties of our Country from disappointed Ambition; than any other source.

2d That we do not look to the Bank of the U.S. with an eye of pleasure; but that we more heartily approve of the removal of the Deposites, than we do; of paying Hon. Senators & Representatives, for long speeches against the measure.

4th That we approve of the removal of the Indians, & would as heartily approve of a withdrawal of the Publick Bounty, from Missionaries & Teachers; as we look to them as a fruitful source of difficulties which have existed between the Gen’l & state Gov’ts.

5th That from the commencement of the present Session of Congress; we observe that ^in one branch of our Legislature^ “restless spirits, are only becoming more restless”. What have they done?

6th That in our opinion the Byography which is spontaneously written by posterity; is as honorable & desirable as that, which, disappointed Ambition hires to be written.

7th. That the above be published in the Easton Argus, & that Mr R. Bacon be requested to forward a copy to the President & one to the Vice President of the U. States

Enclosed in: Rufus Bacon to MVB, 24 February 1834
Note: Because this document is only a verified first-pass transcription, it and the document metadata may still contain errors. 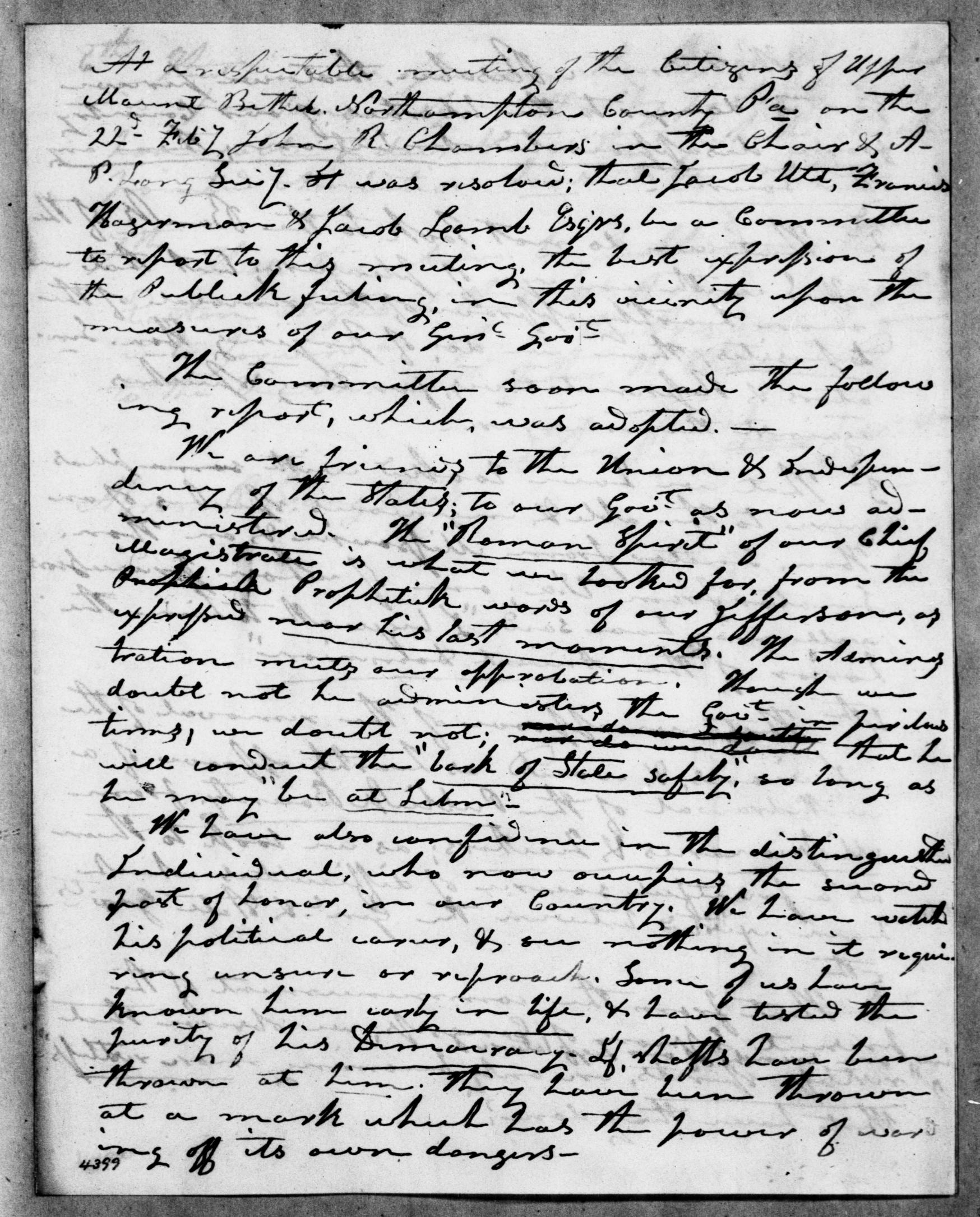 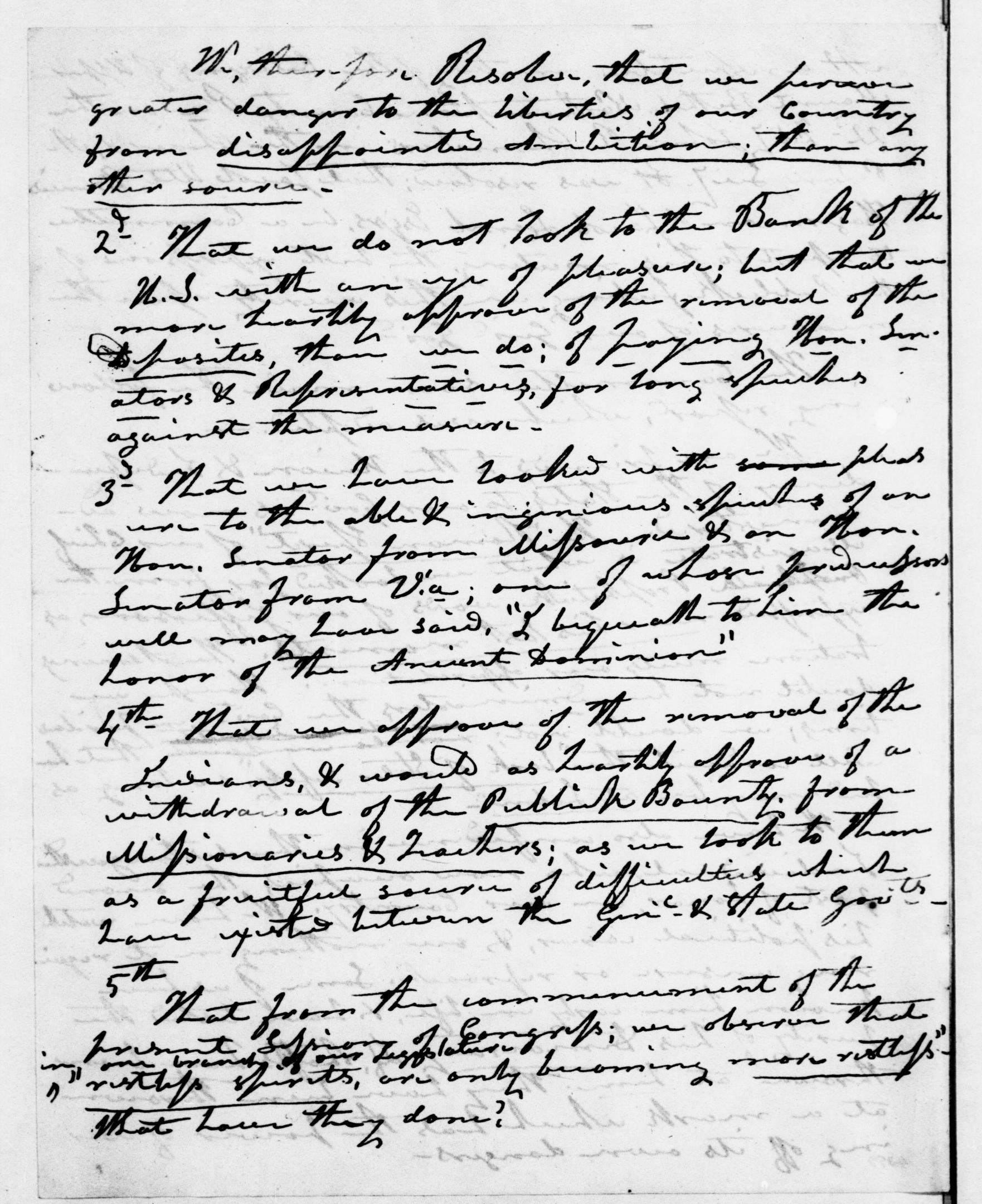 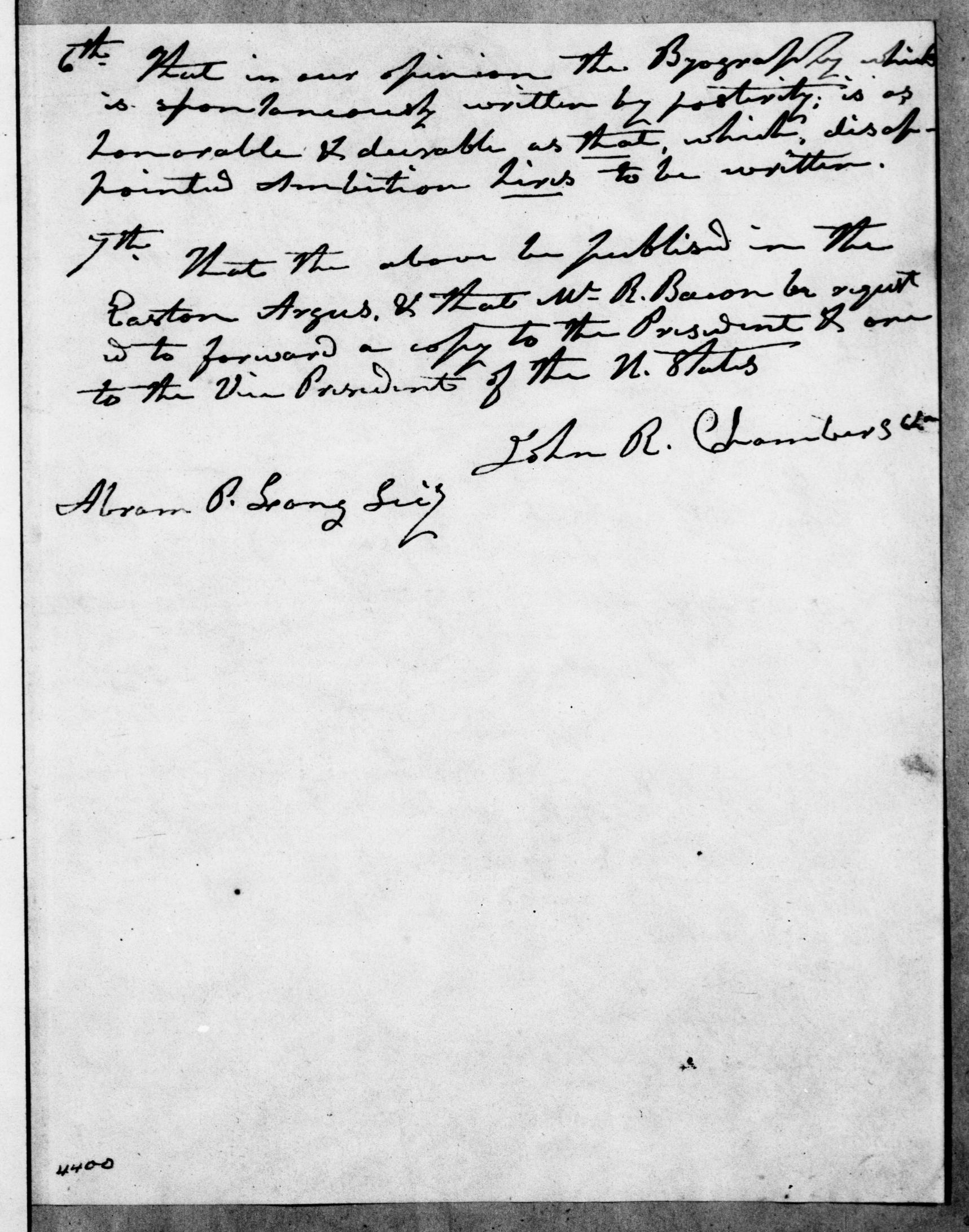