I cheerfully fulfil the promise I made to you in our last conversation to to state frankly and unreservedly what I beleive to be the state of public opinion in regard to the administration of Mr Van Buren among the Democracy of Pennsylvania. I have recently as you are aware visited various quarters of the State and seen and conversed with leading democrats from at least two thirds of the counties and I can say without scruple that the result to which I have been brought by the numerous conversations I have had is, that the confidence of the Democracy of the state in President Van Buren has been deeply affected by the universal impression that he has wholly neglected and refused to exert his influence and patronage to tranquilise and settle the destructive broils existing in our party. You cannot fail to have observed that during several of the latter years of President Jackson’s Administration a feeling gradually sprang up in Pennsylvania of silent distrust in his regard for our own rights and our services—that feeling smothered but not extinguished—and unfortunately it has cherished and strengthened the dissatisfaction with President Van Buren’s measures.

The last contest for Governor was so bitter and unrelenting that neither Mr Muhlenberg nor any of his prominent opponents in the ranks of Governor Wolf can expect can expect to be <illegible> ^forgiven^ by his democratic Opponents.

Mr Muhlenberg’s position is especially painful. He has enemies who will not tolerate his nomination for Governor, but who are willing to see him in any other post. He has friends equally resolved not to see him prostrated. Both of these classes have looked to President Van Buren to extricate them from the dilemma in which they are placed. He has thousand’s of Friends who will see the “flag Ship” of Democracy sink in the contest before they will suffer their favorite to be treated with cold ingratitude and contempt. Mr Van Buren can appease, or he can let this deep and abiding resolution sunder the party into atoms. His late message has given much satisfaction but I heard an old democrat of high standing say a few days ago, that, “altho the message contained bold words yet he had merely echoed the sentiments of Gen: Jackson and that his administration had not performed a single bold decided act that it had been thus far only a series of temporary expedients to satisfy those in office with continuances in their places, and those out of office with fair promises to be fulfilled at some indefinite future day”. Such are the views of thousands who at the late election sustained Mr Van Buren, and depend upon it unless a change takes place in his feelings in all those respects nothing short of a miracle can save him in this State. I regret it, but regret cannot change public opinion. At the last Presidential Election Gen Harrison <illegible> run us so hard under the disadvantage of President Jacksons high reputation to contend with super added to the unpopularity of the Banks that it is needless to deny that the very impression of the fact is operating against us in the most inevitable manner.

Harrisons friends are everywhere confident of success while the friends of the National Administration are in doubt and despair. The rallying word on our side is “Jackson” still whilst on the other side the name of Harrison swallows up Ritner and all other party distinctions. Such indeed is his supposed popularity that he will be nominated before the next general election to unite the opposition and carry Ritner and the Bank through in safety. 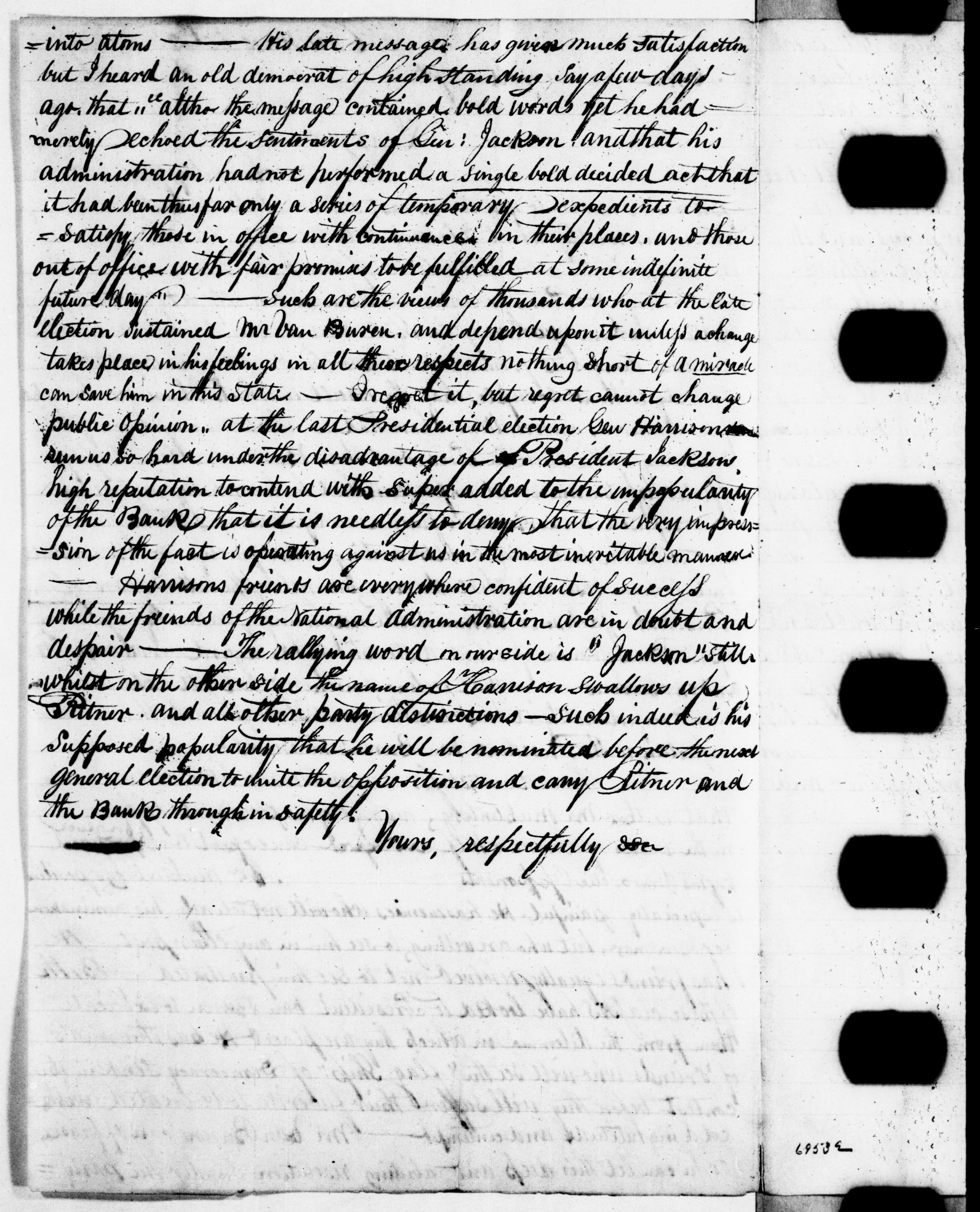 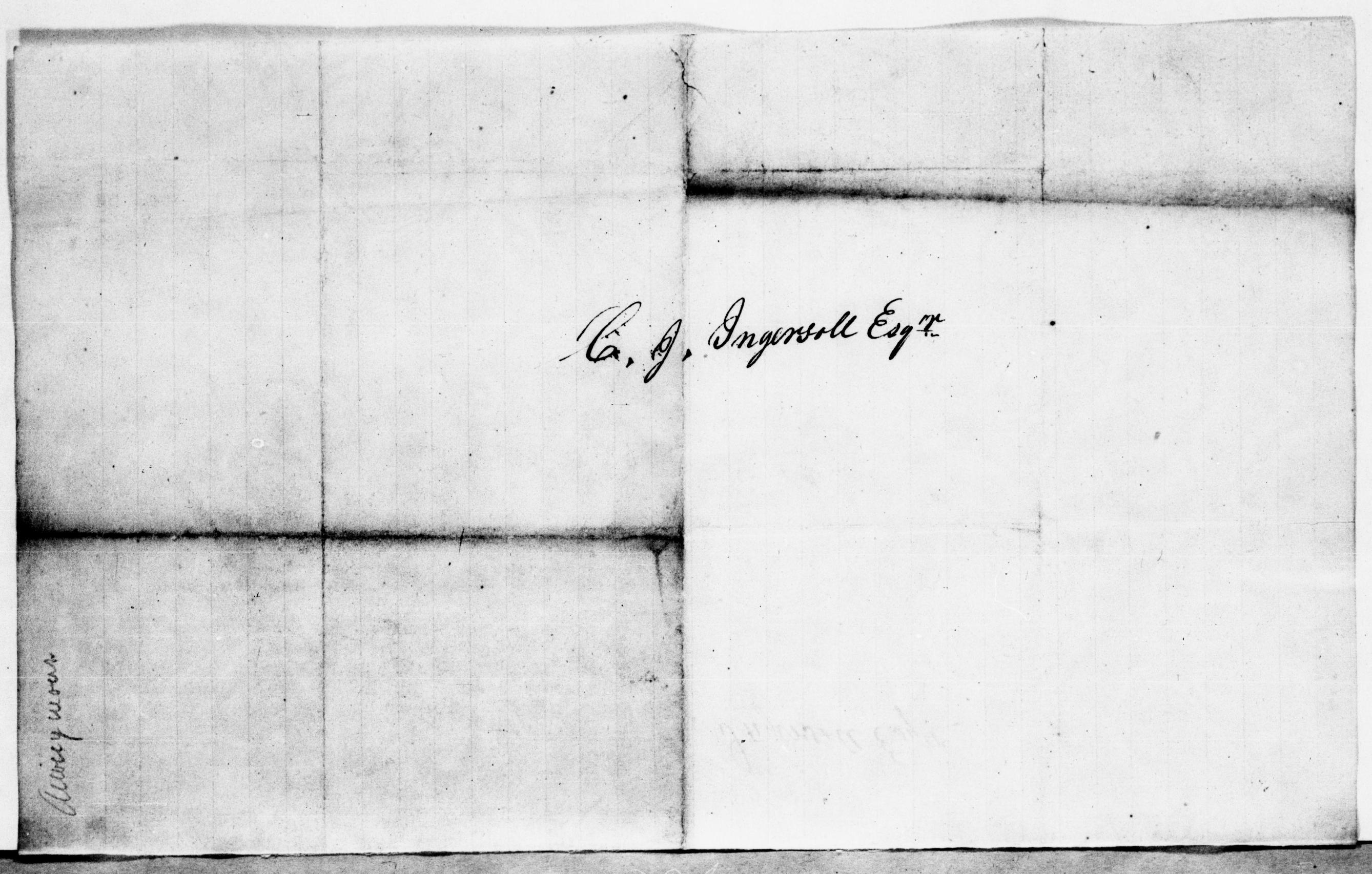