MVB memorandum on the BUS and its rights in New York, [c1833]

<illegible> the consideration of the question of the house of the Legislature of Pennsylvania to pass the repealing act of the 18th. of September 1785 of which I am not satisfied & of which I do not think necessarily results from the establishment of the position that a singular power is vested in the Parliament of Great Britain, I am notwithstanding clearly of opinion that the acts of acquiescence & recognition on the part of the Bank have been such as to conclude the stockholders from claiming in that state any other or higher privileges than those secured to the Bank by the act of the 28th of March 1825.

The second question stands upon very different grounds. In now considering the rights of the Bank under the act of 1782 it is difficult to resist the influence produced by the facts that the claim now set up viz that of transferring the ^Ohio^ seat of ^the^ operations of Bank of North America from Pennsylvania to Nyork under that act is insisting upon a <illegible> <illegible> claim under a Statute which has for a long time been considered obsolete & against which the mind is naturally led to infer <illegible> and presume much. I have felt the full weight of that difficulty myself & am well satisfied that ^a^ similar effort will be produced upon the minds of those whose duty it may become to pass judically upon the subject hereafter. But after a careful examination of the question I have not been able to discover any well found objection to the claim of the Stockholder of the Bank to exercise now all the powers and enjoy all the priviliges which were granted to it by the act of the State of the 11th. of April 1782 entitled "an act to prevent the establishment of any other Bank within the state than the Bank of North America & for incorporating the same within this state".

The Company thus incorporated that is the President Director & stockholders of the Bank of North America are still in existence & the law of this state of the 11th of April 1782 has never been repealed or annulled. Its power right to establish exercise banking primarily in this State after the passage the act are not questioned. They can only have <been> <a> <friend> of <illegible> or one or

By the act of incorporation the company was left at liberty to establish the bank in any of the states <illegible> who should sanction the ordinance as in each of them but <illegible> the same was carried on it was by the states at <illegible> designed to be under & subject to their authority. By the acts of the states they were The different acts of the states had no reference to each other nor were they in any other way connected <illegible> as they referred to one association & affected one interest. To <illegible> the <motive> of the authorities from <where> they proceeded they must be as it was not competent for the state of Pennsylvania by any act it would pass to appoint any rights secured by an act of the State of Nyork. The same Company to which both the acts relate related still exist. For not it is an established principle that an incorporation <reviewed> or <continued> by a new act remain ^the same^ as it respects its rights & its duties except so far as it is restricted or endorsed by the new act. To all other <illegible> it is to be ^considered &^ treated as the old <illegible> corporation. The company have not voluntarily <illegible> or <illegible> any thing. All that can be imparted to them is this that they have not resisted the encroachments of the Legislature of Pennsylvania but have <sometimes> <illegible> submitted to <them> & <illegible> themselves to enjoy that portion of their corporate rights which was within the sphere of Pennsylvania legislature as they best could. The company was conscious of the want of <power> in old Congress to sustain their privileges of their consequent dependence upon the state authorities. In 1705 the Legislature of Pennsylvania <illegible> the charter & did not revive it again until 1787. Suppose the company instead of struggling with the Legislature of Pennsylvania had transferred the Bank to this state and made it the seat <illegible> of the ^its^ principal <illegible> ^operations^ of the Bank Could a question have been made as to their rights. They paid for their warrant at not only the full force of an ample & unassailed act of our Legislature but ^<until>^ two years afterwards was <reported> to the division appointed by law among the existing statute and ^as such^ placed in the <illegible> volume of <received> law by <illegible> <illegible> Varick & Jones. The rights of the company therefore to have done them what <illegible> ^it^ claims to do now would have been complete. No act of this state passed since has changed the ground. The company <illegible> still exists & has <illegible> nothing in this state at <illegible> or any where else with reference to its rights here. If those rights have been <illegible> it can only be through their omission to <illegible> them. As I have already stated the Company had it at their option to have their Banking <house> in one state and circulate their bills in the other states by whom they had been incorporated under the sanction and protection of its laws passed for that express purpose. <illegible> They might enjoy their priviliges in their whole extent in each state. They chose the former & established their banking house in Philadelphia. From that period to the present they have enjoyed the same priviliges under our laws that is security to their purpose by Virtue of special & still existing Statutes. It has not till now comported with the interest of the institution to exercise their entire rights in this state & can it be seriously contended that they have are deprived of their right to their business They have not heretofore enjoyed them in their full intent. I think not. It may <illegible> excite surprise and at ^the^ first blush appear ungracious to set up the right in question and the circumstances, but that is one thing & the legal rights of the parties another. A Solemn act of our Legislature conferring private & <cloistered> rights cannot be adjudged out †of existence without some solid tangible & legal principle to rest that adjudication upon. In my opinion there is no principle in our law which can with any show of reason be made to perform that office in this case.

The passage following † is written crossways in the left-hand margin of the final manuscript page. 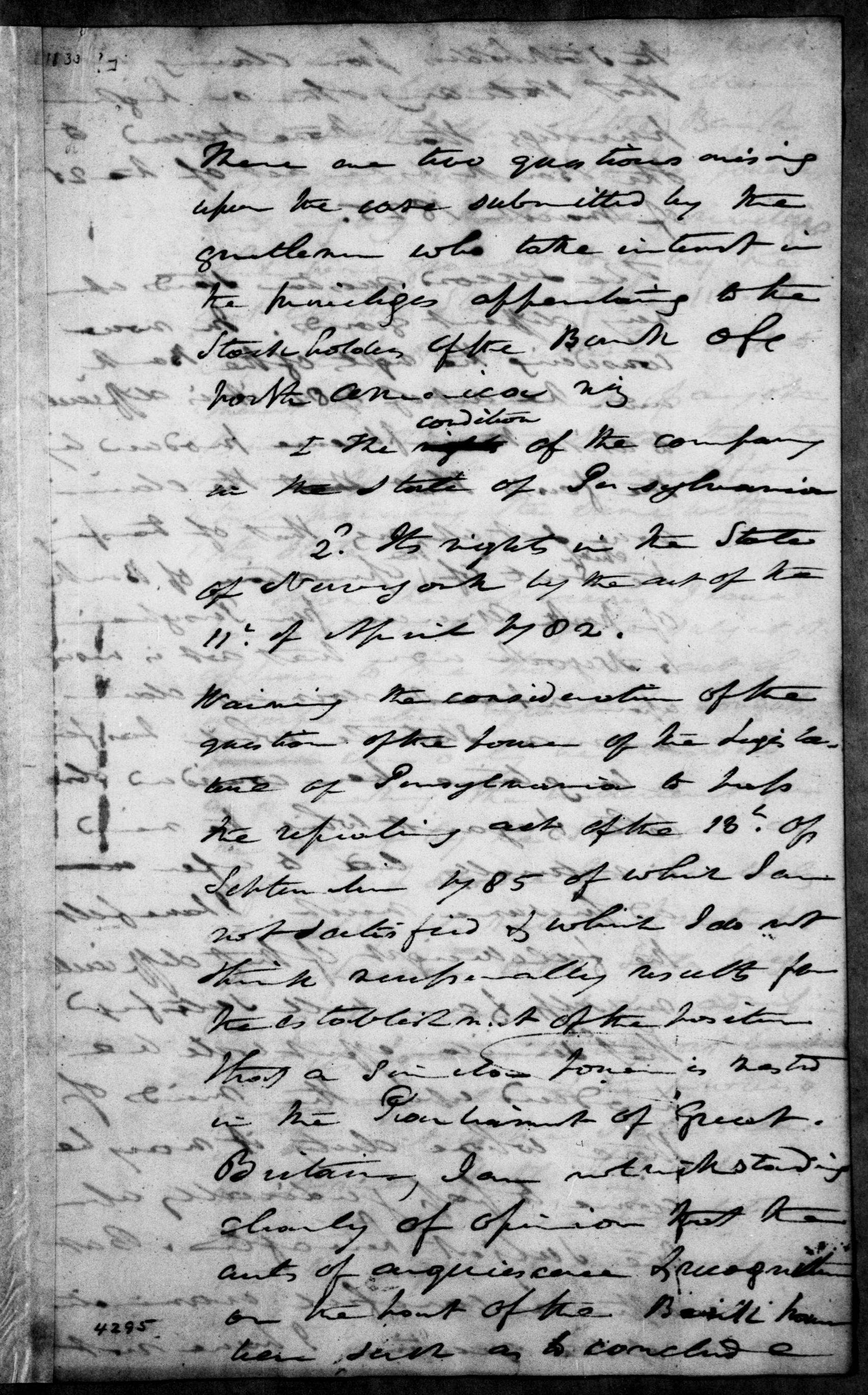 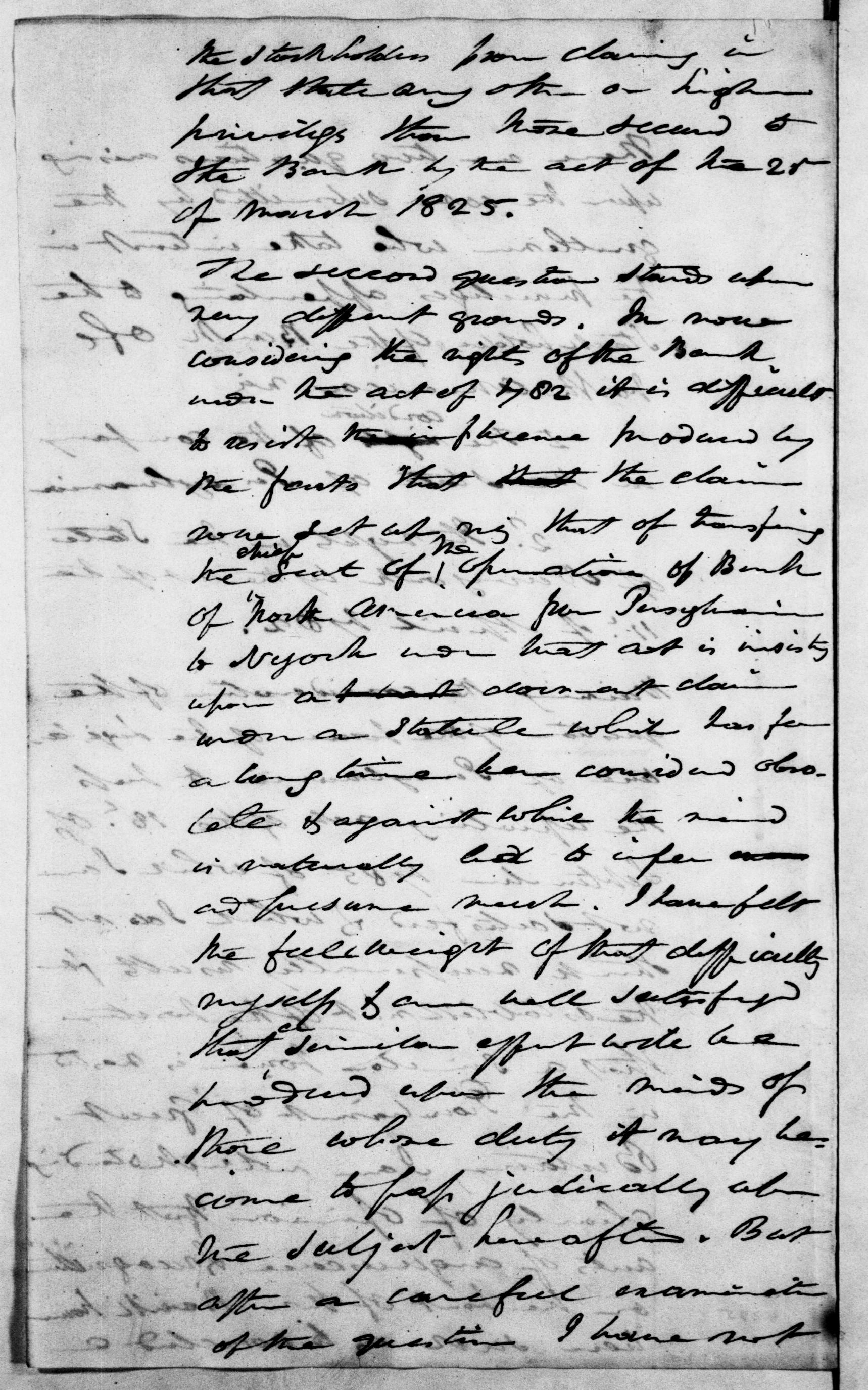 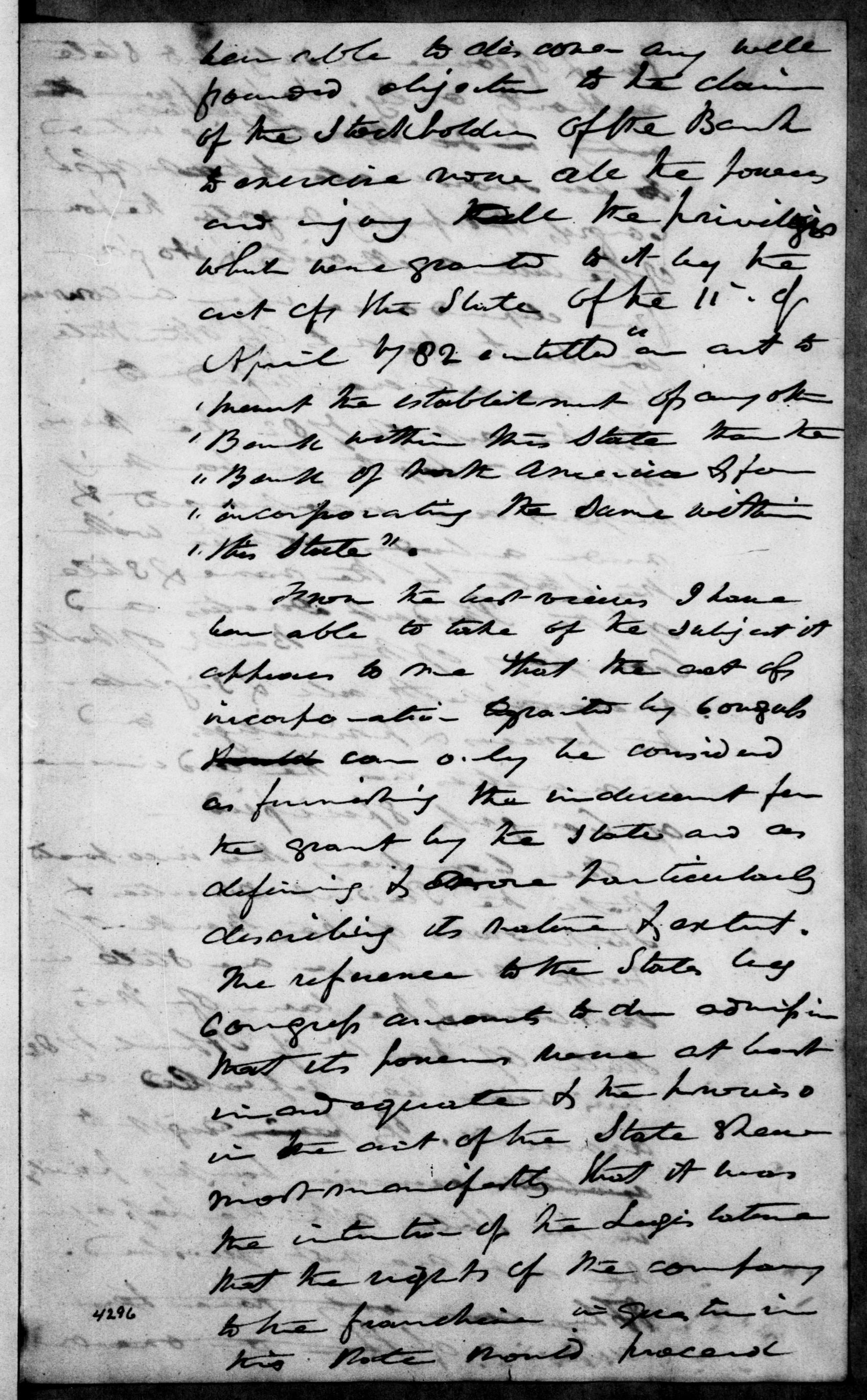 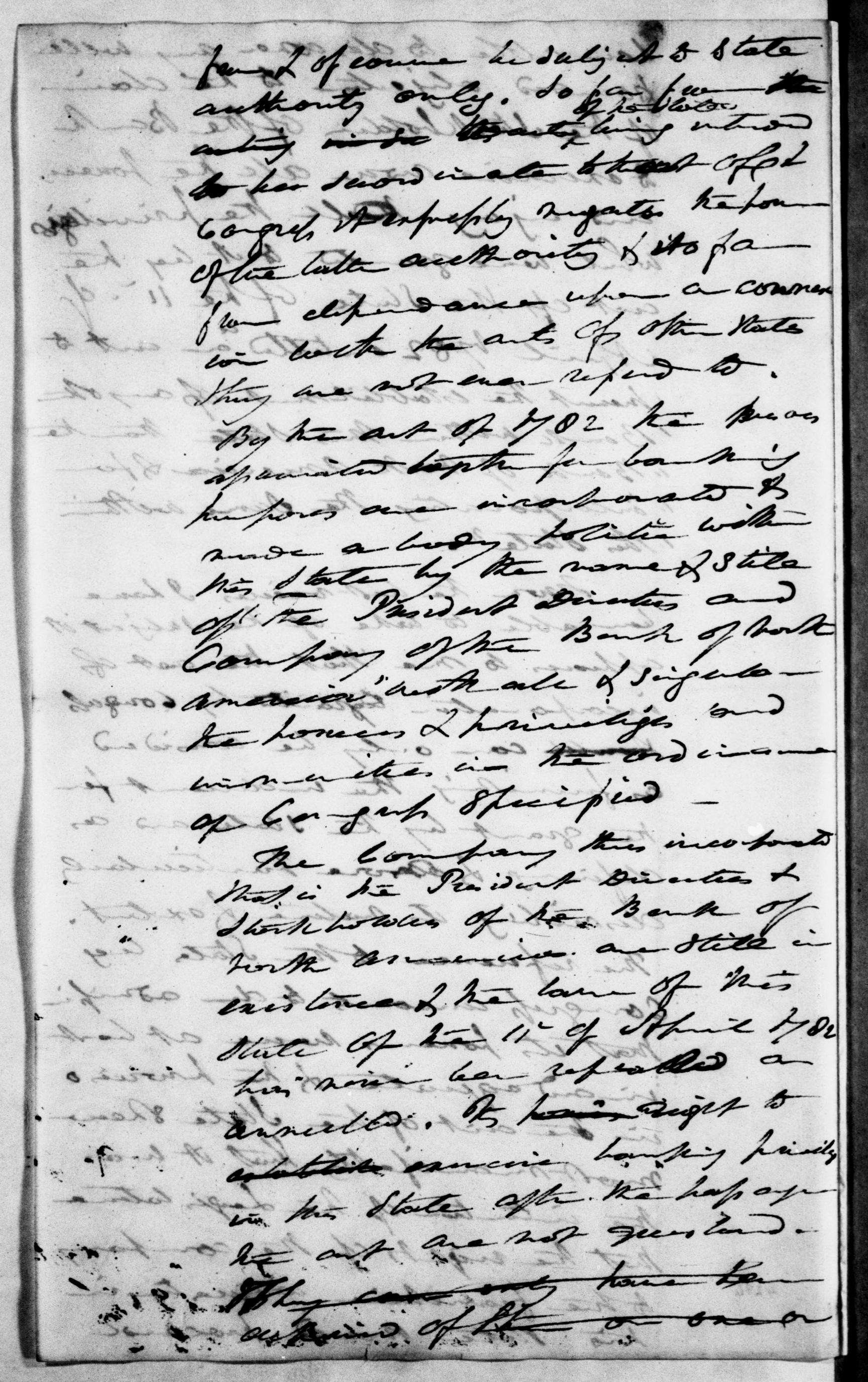 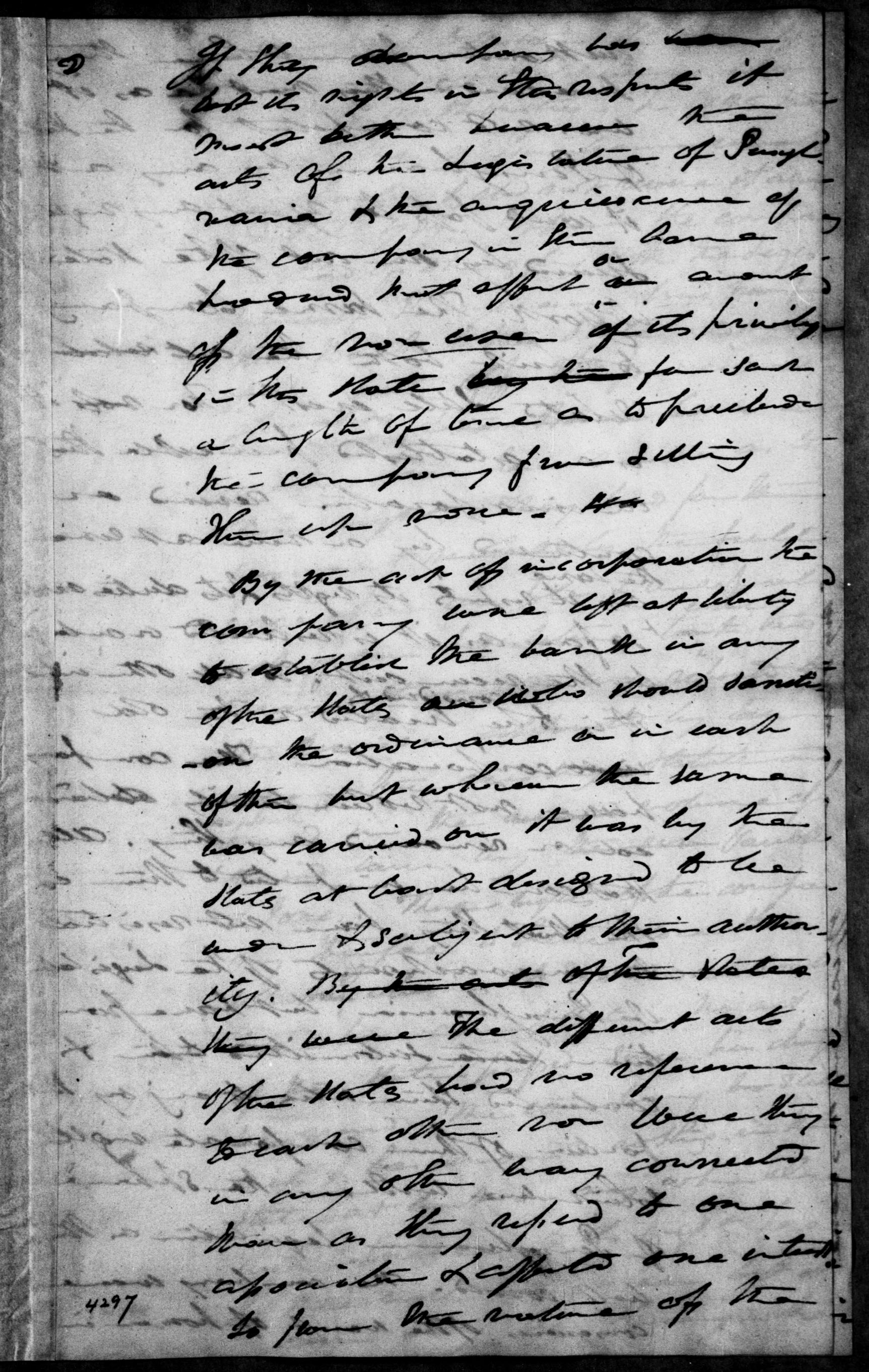 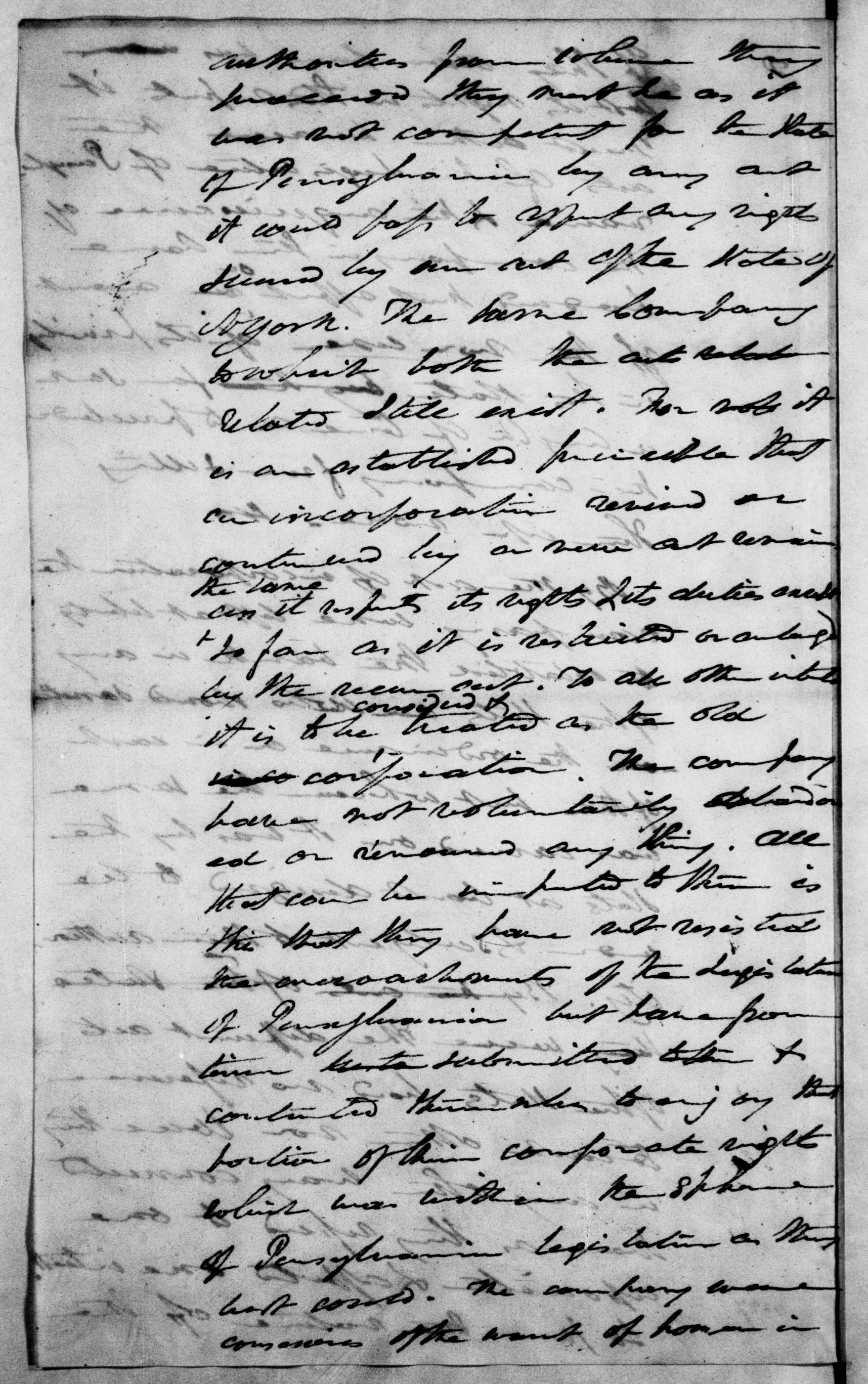 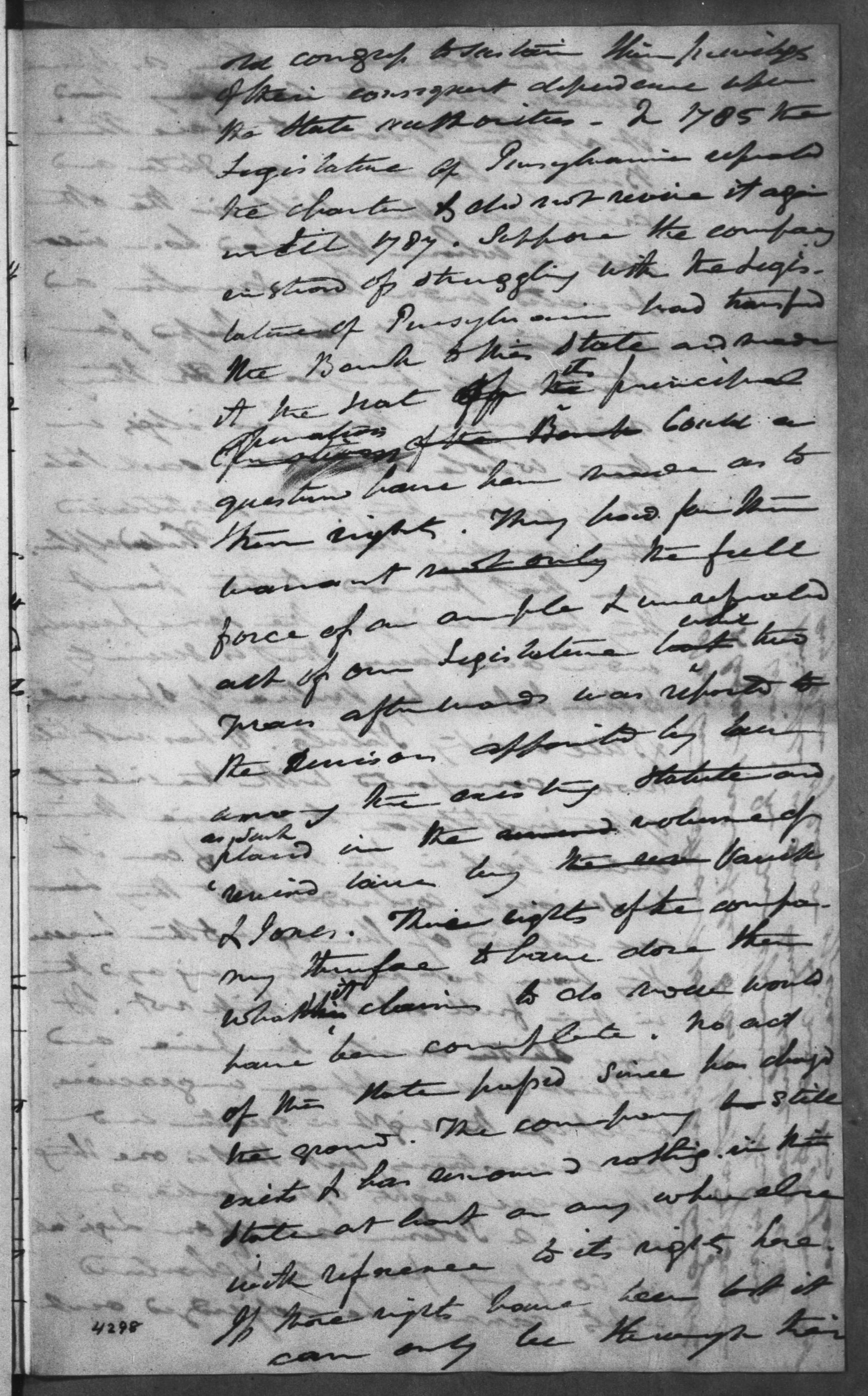 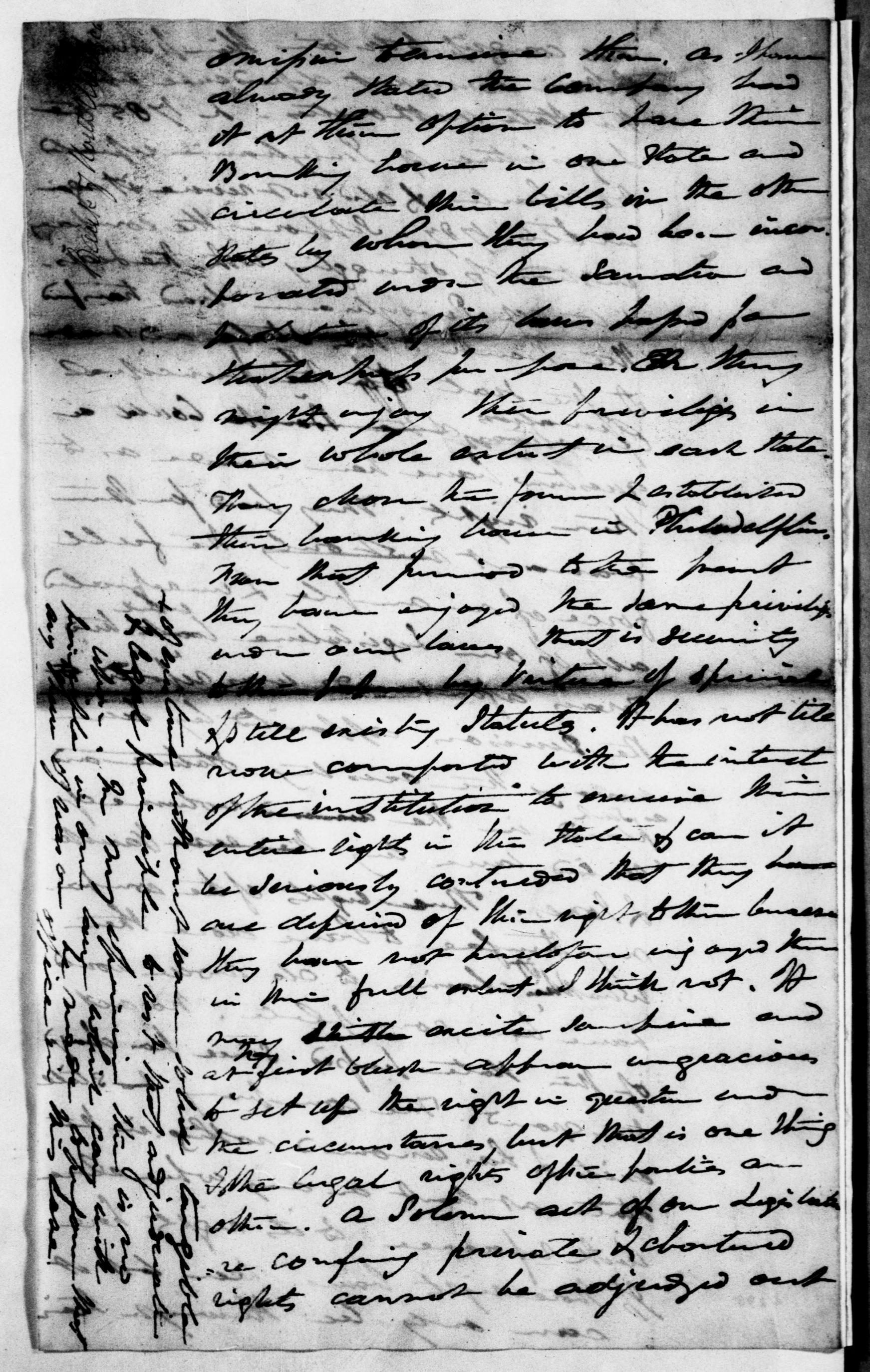