Your letter of the 23rd of March is just received, and I sincerely regret that any cause should have arisen to have posponed your visit, accompanied by your secretaries, to the Hermitage but I hope the clouds of war on the political Horison will soon blow over, and peace on our northeastern borders be soon restored. Britain is a proud & domineering nation, and the spirit breathed by Wellington & other Lords in parliament, show a hostile spirit lurking in their boosom The intimations against our Government in not controling our citizens from engaging in the Canady insurrection is both unjust & ungenerous; and intended to rouse bad feelings between their subjects & our citizens preparatory to war, when Wellington and all the ministry know better. They know that all the power of the Executive was brought into action to restrain our citizen. Great Britain will not at present hazzard a war with us. Lord Wellington, with all his martial pride must know, that she would loose every foot of terra firma in north america, but should the proud & domineering spirit of great Britain prefer war to adjusting ^the difference^ agreeable to the treaty of 1783, ^& establishing^ the north eastern boundary, then it must be firmly met, on the principle, "ask nothing but what is shorly right & permit nothing that is wrong,” and should great ^Britain^ contrary to this rule force us into war, then my feeble arm, if providence permits it, shall be once more raised in defence of our government & glorious union, sustained by fifty thousand volunteers, to chastise the temerity of British insolence.

I sincerely regret the cause that will detain you from your tour & visit to the Hermitage, but your duty to yourself & country require that you should be at your post. I need not say what pleasure it will give us to Hail you welcome at the Hermitage When your duty will permit & I can add every true republican in the state will greet you.

The exertions of Genl Armstrong Major A.J. Donelson & my <self> ^feeble aid^ has at length brought Burton out as a condidate for Congress in this District in opposition to Bell, and I have no doubt aided by our strong ticket for the country, old Col Weakley at its head. That the republicans will succeed, and I assure you ^your^ kind feelings expressed with regard to Genl Armstrong gives me pleasure for had it not have been for his untiring exertions Bell would have walked over the Ground without opposition which would have done more injury to our cause thro’out the state than could be calculated on, now I think we will have an entire republican representation in the next congress, with polk for governor, & a republican Assembly, & Old Democratic Tennessee will be herself again, and Foster & White will have to retire to the humble walks of private [life] I had no idea that Genl Armstrong ^& that of his friends^ could be accomodated in his military desires, unless Genl Gains resigned. But one thing I do know, that if war should be declared, Gains will never reap laurals, unless in the defence of a Fort. I will only add that I know the merits of Armstrong, and that if Tennessee is again brought back to the republican Fold, it will be more to his exertions than any other man in the State, and if he cannot in a military situation, I hope, when it can be done with propriety, his son who is a youth of strict sobriety, & business habits, will obtain the situations sought for, when it can be done with propriety, & I have no doubt, but the General thro the agency of his son, & ^his own^ supervision will put down all complaint of injustice to the soldiery.

The Genl informs me, that Mr Harris was unfortunate in having his first supply of goods sunk on their outward passage which accord^ed^ some delay for another supply, which Mr Harris has obtained & has been some time at its post. Genl A. is too much of a solider & soliders friend every to permit injustice to them where he has any agency in the supply. I have recd from the secretary of war Mr Poinsett a very satisfactory letter on this subject & feel satisfied that when it can be done with propriety it will be, and I can only add that it will be doing justice to one who has risqued his all in the service his country & the peoples cause & deserves the confidence of the Government.

I have not seen Polk. I was too unwell & the weather inclement, and under operation of the Matchless Sanative, which is likely to relieve me from Hemorrhage, to go down & he was pressed for time & did not come up, he will do his duty. You cannot immagine how we have been pestered to get out proper candidates. Govr. Carroll behaved badly in not at once coming out or declining. We have lost much by permitting the enemy in the field without opposition for three months & some one in the field to correct their calumnies and falshoods. Burton last monday made his first address to the people, it is said to be a happy effort. The Whiggs now at all points over the State will be ably met. I am sanguine now of compleat success. Should this be realised, if not restored by the matchless senative, old simeon like, I will die in peace, for I cannot remain long unless relieved.

I will have to go to the north western part of Mississippi, if my health permits, to endeavor to settle some matters ^with^ a man with whom my son has some contracts, and who I am afraid is a great scamp, therefore, that I may be at home to receive you & staff, please write me when you will leave Washington.

My son & Sarah, with Major Donelson, unite with me in kind salutations to you & your whole Household & all the heads of Departments and their families.

P.S. I scarcely need say, that this is for your own eye or your confidencial friends. When I see you I have much to say to you. Never falter untill the constitutional Treasury is established by law & a compleat seperation from all Banks. Then, & only then is our republican institutions placed upon a sure & lasting basis, and the prosperity of the labour of our country ensured. 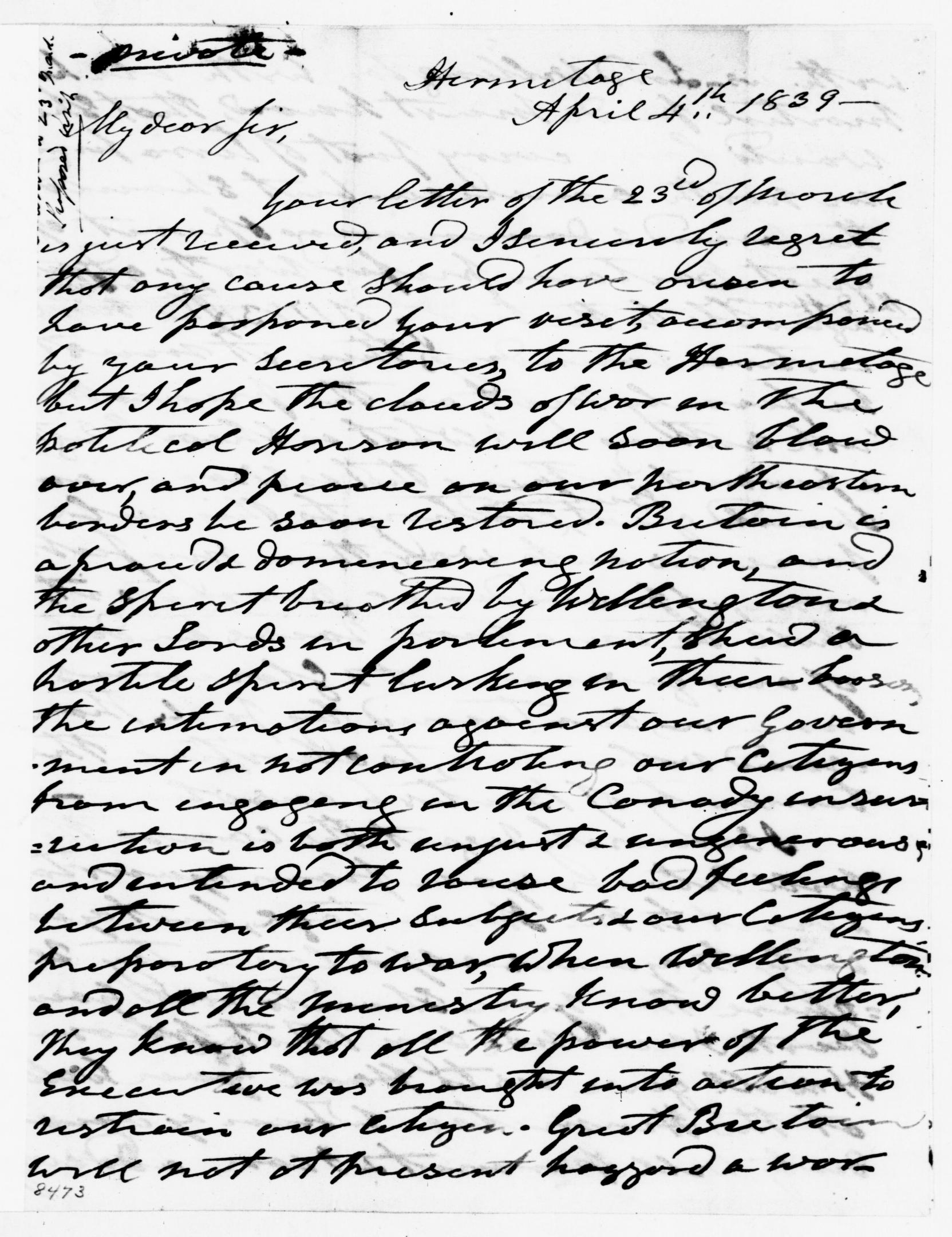 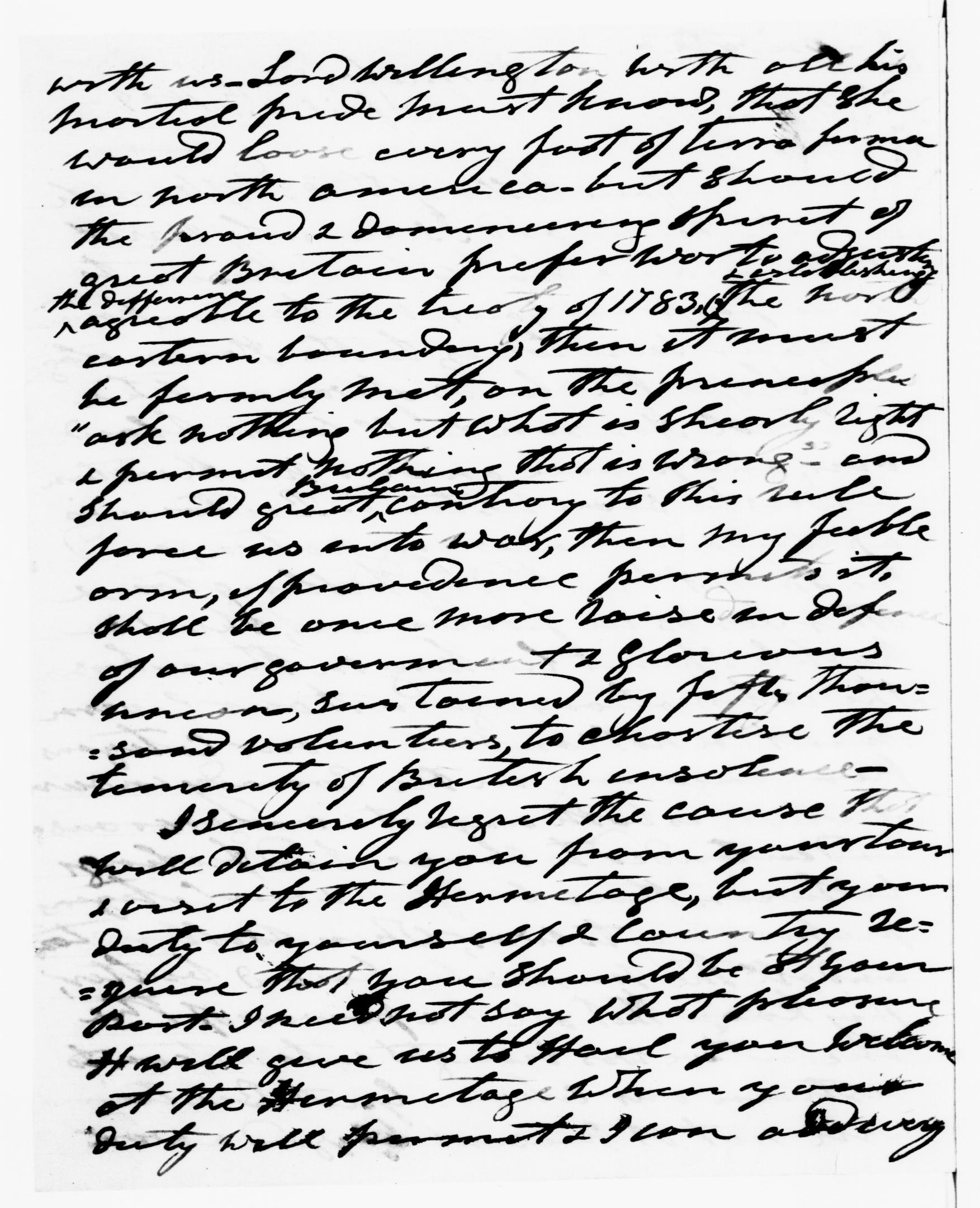 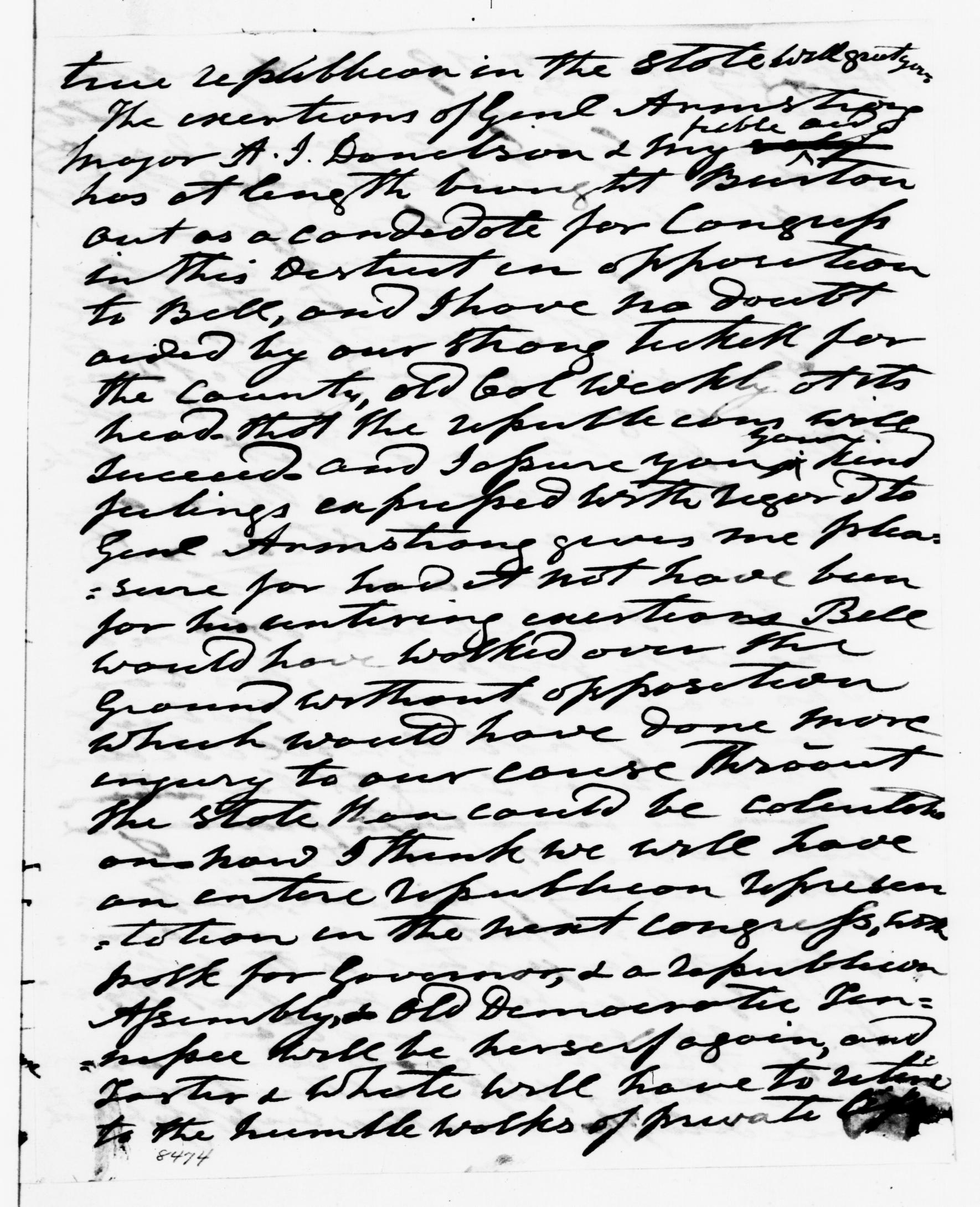 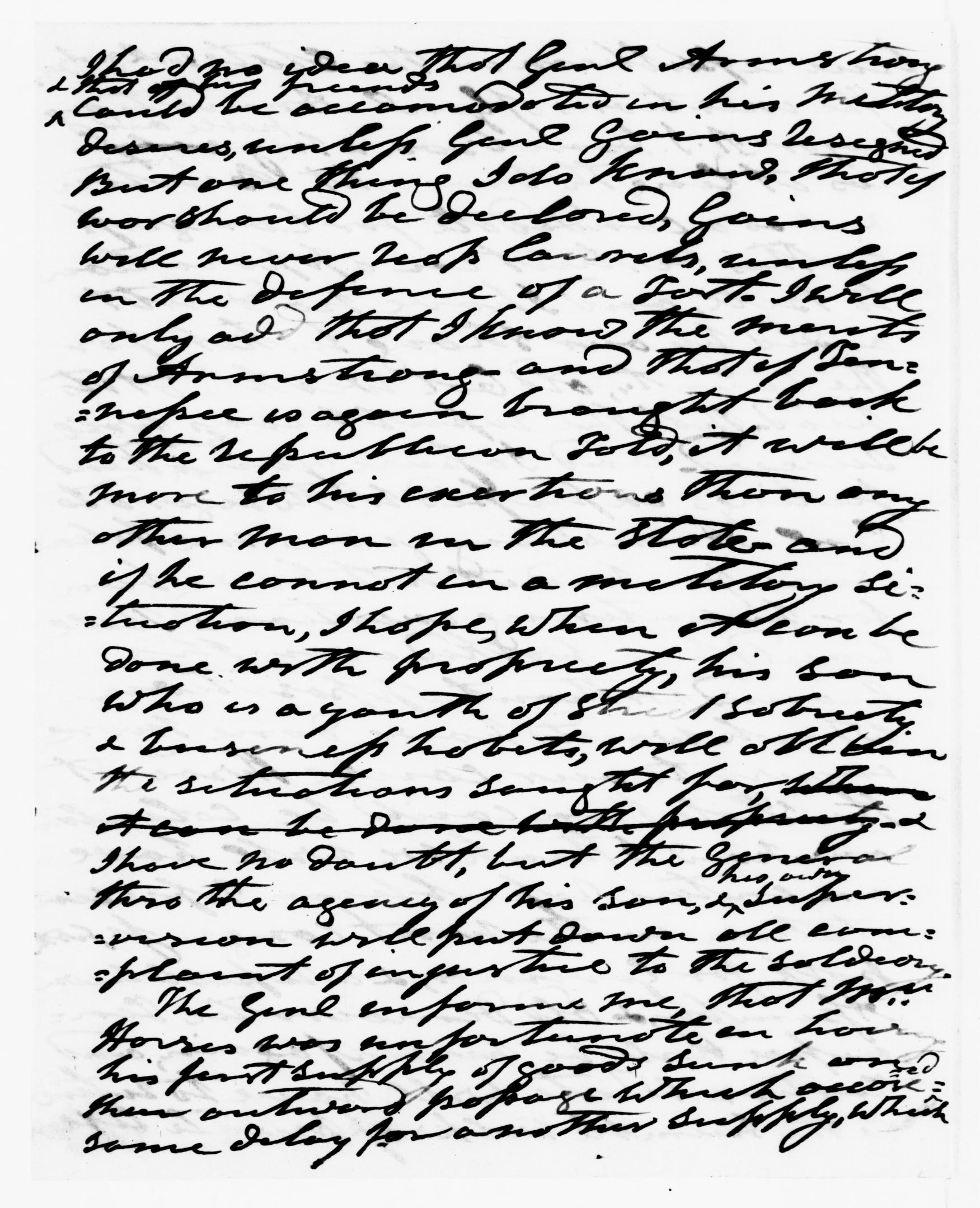 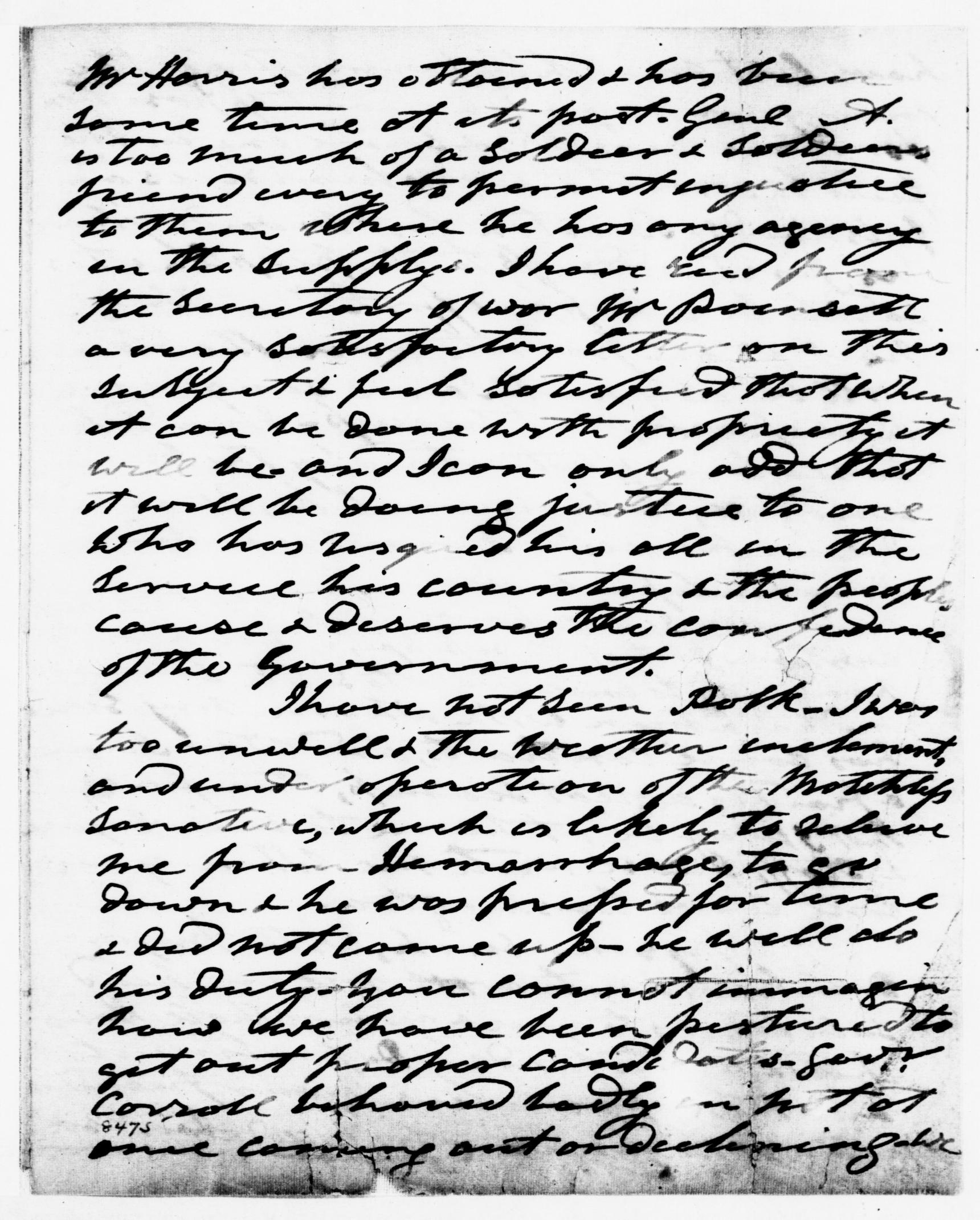 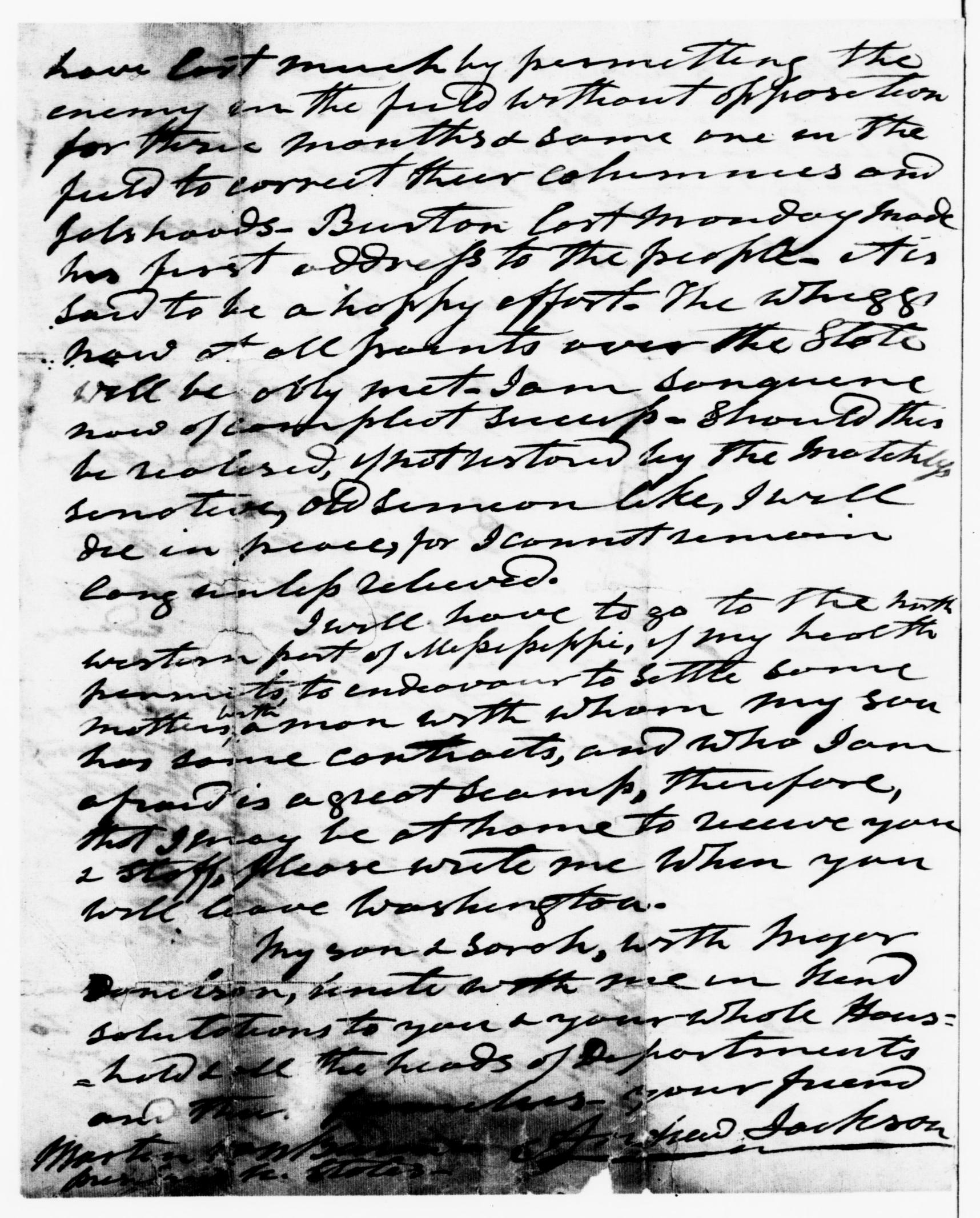 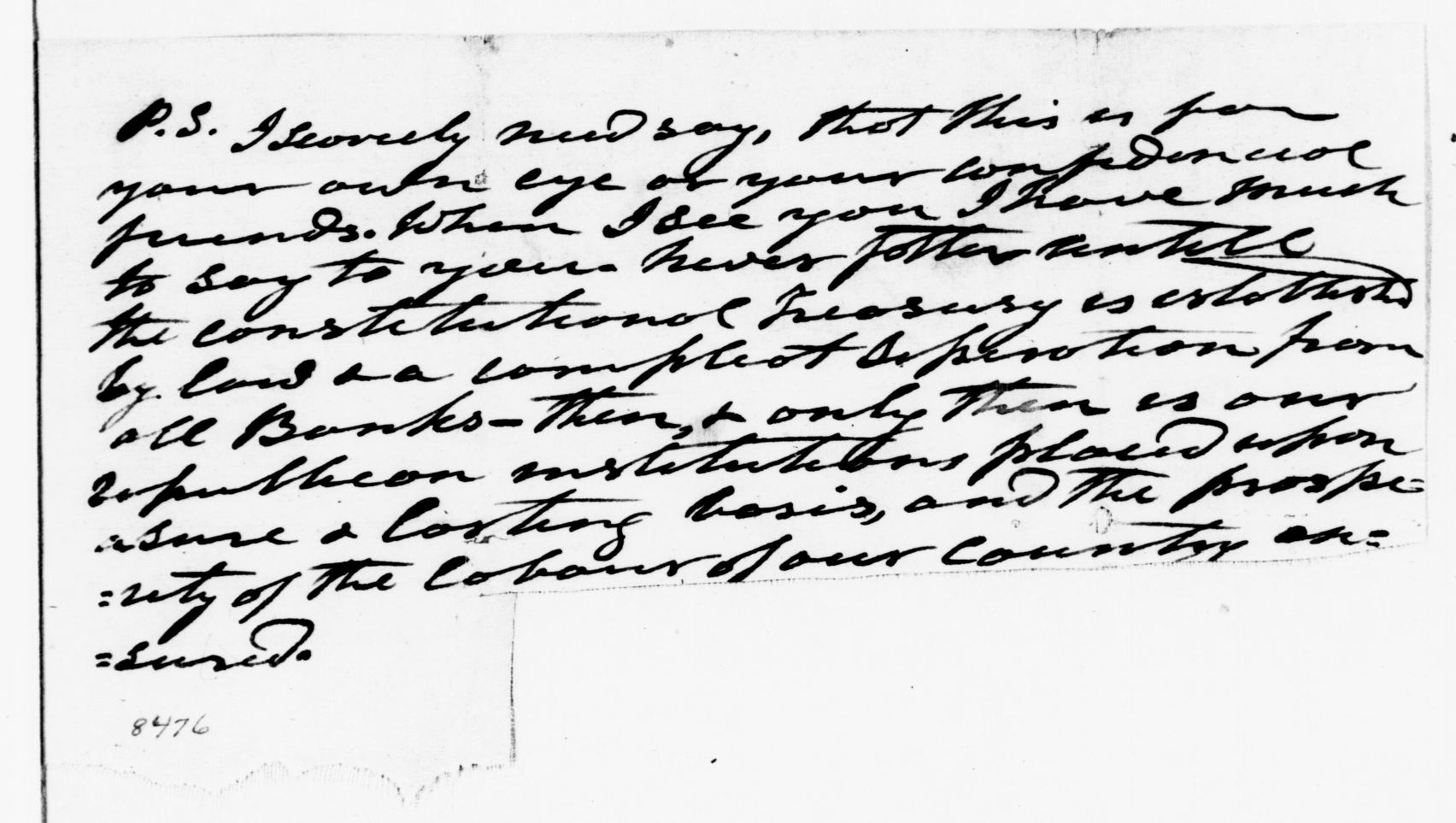