Proceedings of, and Resolutions adopted at, Tammany Hall meeting, 19 February 1834

At a meeting of the subscribers to the memorial presented to Congress against the restoration of the deposites, and against the renewal of the Charter of the United States Bank, held at Tammany Hall on Wednesday, the 19th inst., Stephen Allen was called to the Chair; John H. Howland, and M. M. Quackenboss, were selected as Vice Presidents; and Prosper M. Wetmore, and James I. Roosevelt, jr., were appointed Secretaries.

The following Report was presented and read by Mr. Levi Kidder.

To the Merchants, Traders, Mechanics, Artizans, and others, citizens of New York, and to the members of the Democratic Republican Committees of the several Wards of the city, the Delegation appointed to present to Congress the Memorials by you signed, beg leave respectfully to report.

That pursuant to their appointment and instructions, your delegation repaired to Washington, and forthwith made known to the Hon. Messrs. Wright and Tallmadge of the Senate, and the Hon. Messrs. Cambreleng, White and Lawrence, of the House of Representatives, the object of their mission; and your delegation have great pleasure in stating, that from these gentlemen they received such cordial co-operation in promotion of your wishes (which are those of a vast majority of our citizens) as was expected from high minded, intelligent men, faithful to their constituents, ardently devoted to the constitution, and well acquainted with the country's best interests, which they are unalterably determined to support.

By them it was agreed that the memorials should be presented to the Senate by the Hon. Mr. Wright on the earliest convenient opportunity, and to the House of Representatives, by Mr. Cambreleng, on the 10th inst., which duty was cheerfully performed by the Hon. gentleman, in terms and manner most appropriate.

The other documents with which your delegation were instrusted-those to the President, Vice President, Secretary of the Treasury and members of Congress, were duly presented, and received all the attention which their great importance demanded. Your Delegation had interviews by appointment with the President and Vice President of the United States, and the Secretary of the Treasury, from all of whom they received that courteous and kind attention for which those gentlemen are so eminently distinguished. From those high functionaries your delegation had the satisfaction to learn, that so far as it rests constitutionally with the Executive Department of Government to interpose its power, the public deposites will not be restored to the United States Bank, nor the Bank re-chartered, neither will any National Bank be chartered, until by fair experiment, it shall be ascertained that State Institutions cannot afford the requisite facilities to commerce, which the common good requires.

In conclusion, your delegation have full confidence that the popular branch of the National Legislature will nobly sustain the Executive in his patriotic exertion to perpetuate the blessings of civil liberty; and finally, that our country will soon, and forever, be relieved from the scourge of an irresponsible monied aristocracy.

The following Resolution was thereupon offered and unanimously adopted,

Resolved, That the report just read be accepted; and that the thanks of this meeting be returned to the Delegates for the public spirit which induced them to undertake the trust, and for the fidelity and ability with which they have discharged its duties.

The following Resolutions were presented, and adopted by acclamation, and without a dissenting [v]oice.

Resolved, That an expression of the confidence, respect, and gratitude of their republican fellow citizens, is due to the Honorable Messrs. Cambreleng, White and Lawrence, for the upright, consistent, and fearless course which they have pursued, in defending the rights of the people, against the encroachments of an insidious and dangerous enemy.

Resolved, That the independence with which the Honorable Cornelius W. Lawrence withstood the powerful influrence exerted against his principles, is an additional evidence of the integrity and firmness of his character, and of his fitness for the station which he fills with honor to himself and satisfaction to his constituents.

Resolved, That the thanks of this meeting be transmitted to the Honorable Silas Wright, jr. and the Honorable Nathaniel P. Tallmadge, Senators of the United States, for the able and patriotic support which they have given to the Administration, against the assaults of an unscrupulous opposition.

Resolved, That, in the opinion of this meeting, the thanks of every man who loves his country, and wishes to see its institution preserved, are due to Andrew Jackson, President of the United States, for the patriotic zeal with which he devotes himself to the support of the Constitution and the laws.

Resolved, That the Democratic Republican citizens of New York have witnessed with feelings of pride and satisfaction, the dignified and manly course of the Honorable Martin Van Buren, Vice President of the United States; they have beheld him, by his forebearance, courtesy, elevated deportment and surpassing ability, silencing the tongue of slander, and turning aside the weapons of his assailants; they rejoice that the American people have intelligence to appreciate, candour to ackowledge, and power to reward his private virtues and public services.

Resolved, That while respect and gratitude require an acknowledgment of faithful services, strict justice demands that the voice of reprehension should be heard by those who violate a public trust, and disregard the obligations of honor, therefore-

Resolved, That this meeting feels itself called upon to express its deliberate and decided disapprobation of the official conduct of Dudley Selden, whose whole congressional career has been in utter disregard of the wishes of his constituents, and in flagrant violation of a solemn pledge by him voluntarily made.

Resolved, as the opinion of this meeting, That the embarressments which have prevailed in different sections of the country, produced through the agency of a national institution, the interruption of public confidence, and the consequent distress of the business community, present additional reasons for sustaining the administration, in its policy on the subject of the Bank of the United States and the public deposites.

Resolved, That the resolution adopted at a large meeting of the merchants of New York, to endeavor to obtain relief and restore confidence, by mutual assistance, a dependence on their own resources, and an appeal for such aid, as they have a right to demand from every institution established for the general good, is a measure in accordance with the intelligence and business character of this commercial community, and one that deserves, and shall receive, our cordial concurrence and support.

Resolved, That a Committee of thirty persons, including the officers of this meeting, be appointed, with power to confer and advise with other constituted bodies, and to adopt measures necessary to remove existing difficulties, restore public confidence, and thereby avert predicted evils.

In support of the preceding resolutions, the meeting was ably and eloquontly addressed by Eli Moore, William M. Price, Garret Gilbert, and Richard Cromwell, Esquires.

Ordered, That the committee be appointed by the chair; whereupon the following persons were named and approved by the meeting: viz.—

Resolved, That said Committee have authority to appoint delegates for any purpose connected with the objects of their appointment.

Ordered, That the preecedings of this meeting be published, and that copies thereof be transmitted to the President, and Vice President of the United States, the Senators in Congress from this State, and the Representatives from this City.-Adjourned.

Enclosed in: Stephen Allen to MVB, 21 February 1834
Note: Because this document is only a verified first-pass transcription, it and the document metadata may still contain errors.
Editorial Note: 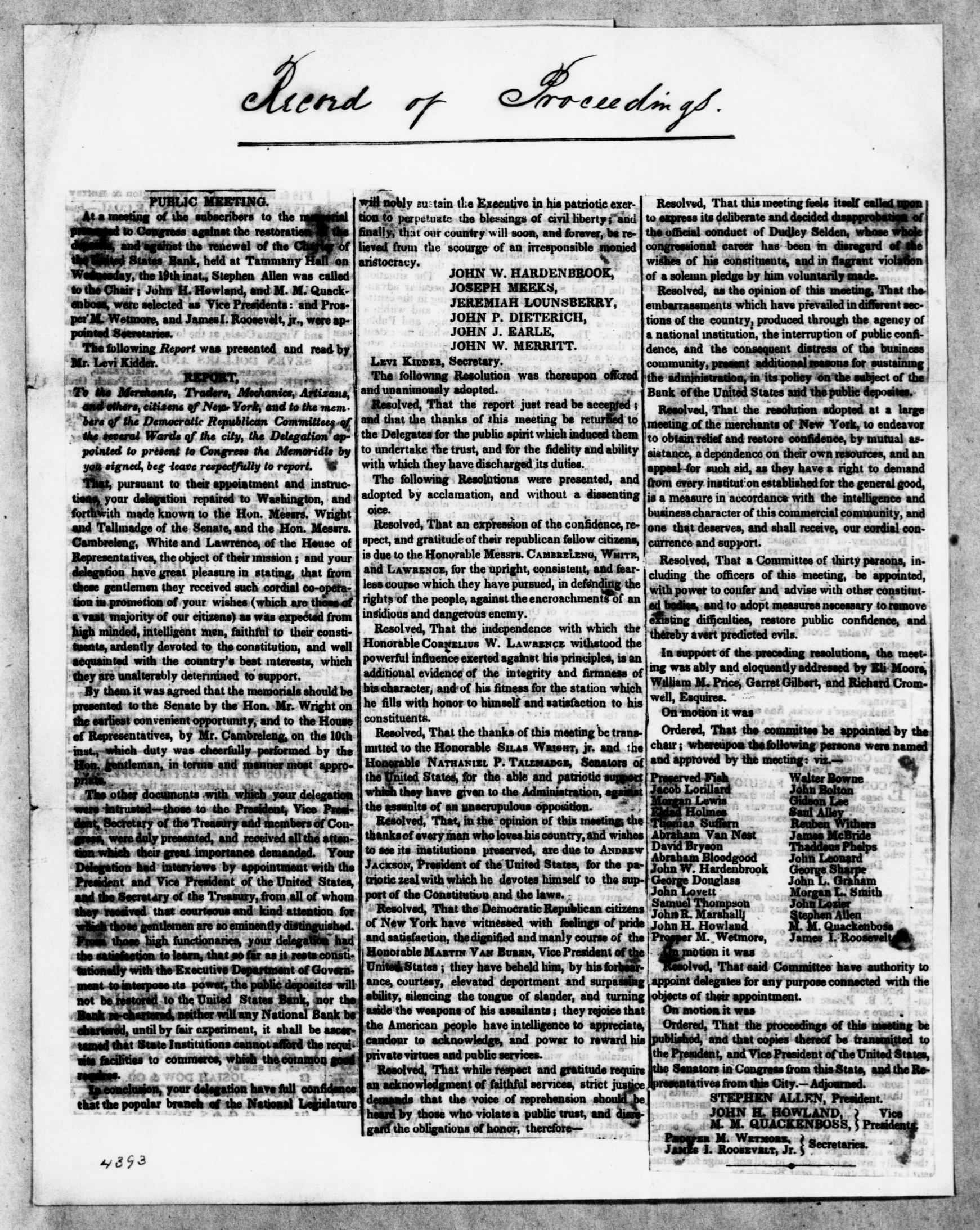