I send you by today's mail a copy of my principal speech & one of the short ones on the Tariff bill which has recently past. I have been trying for months to find time to write you, but as I wished to give you a long letter, presenting a full view of matters & things here, I have not found leisure to enter upon it. And this is another example of the truth, that in <illegible> to do much, we may commonly do nothing. Had I been content to have given you a hasty common place letter, I could have written you half a dozen such; & would have not written you at all. This is a poor excuse, but is the only one I have.

Mr Welles handed me your letter to him in which you request a visit from me in case I should have reason to be in your neighbourhood. I did expect to have visited Spencertown on my return, & supposed that Mrs N. would have been there, on a visit to her Parents. But a different arrangement has been made since she left here, she wished to remain in New York to see a Sister expected there from Ohio, & as she did not arrive as soon as was expected, she has been detained there so long that she could have made but a few days visit with her parents; & I advised her to put off the visit until sometime after our return to Conn. as I expected to have business to <illegible> in the course of the season. We shall not at this time be in Spencertown, but when we are, will endeavor to make you a call.

I <presume> by your remarks in the letter to Mr Welles, that you do not understand the true character of the tariff question, which has been raised, like the ghost of dead enemy & <illegible> the purposes of our little wily Secretary in relation to it. If you had understood it, you would I think have done better justice to my judgement & sagacity—if they fail me on this occasion, I can never have any confidence in my own judgement upon any subject again. This is not the old question but an entire new one; the old question as you are aware was between the ultra protective policy, or the protection of the manufacturing interests as a substantive object of legislation, and the policy of protection as merely incidental to revenue. The whigs who maintained the former doctrine, have for some years past gradually given up their extreme opinions so that really there was little difference in principle on this subject and all that seemed to divide the two parties ^was^ related to matters of detail, on the adjustment of the duties. The ground of controversy on this subject seemed to be removed, as mere questions of detail could not be a <illegible> for serious controversy.

At this stage of this long controversy, a new issue has been presented, by the Secretary of the Treasury, who has taken a new position on the ground of unqualified free trade, thus making an issue between the advocates of a protective policy, as incident to revenue, and the advocates of free trade principles, repudiating all protection incidental or otherwise. They profess in imposing duties, to disregard entirely the consequential effort of the law on the interests <or> industry of the country. This is a basis of revenue which never existed in any country, & which never can exist when there is any sound legislation.

The effect of this new policy will be, to favor the slave labour of the south employed in the production of cotton & tobacco, constituting our stable exports at the expense of the free labour of the middle & northern states. The object of the Secretary is no doubt to make himself the great man of the South, now Mr Calhoun is in the sour & yellow leaf & he is by this schism hoping to reach the presidency. The schism is too preposterous to succede, but it was not understood, by the President, nor by many in either house & has been carried through congress, with the exertion of the entire power of the administration. Benton understood it, but was willing the law should pass, that its authors might be cursed by their own measures. He thought no better of the law, than I did, & yet wished it to pass. I think he supposed his antipathies against the man in power, to carry him too far, as the measure of it goes into operation, must have a very injurious effect not only on the manufacturing & commercial interests of the north, but on the strength of the democratic party; for if we defend it, we shall find ourselves in a false position, & precisely the one, the whigs have long tried to place us in. Hence they wished the bill to pass & it was really carried by them, for Jarnagan cared nothing about his instruction & was prepared to vote just as his friends desired. They were divided; the northern whigs, wish to defeat the law, but, Critenden, JM Clayton & the whigs of the West & south; wished it to pass to make political capital out of it, & they had the most influence over Jarnigan.

This is a hasty & imperfect history of the matter, but I have not time to give you a more full & correct account

I am yours truly 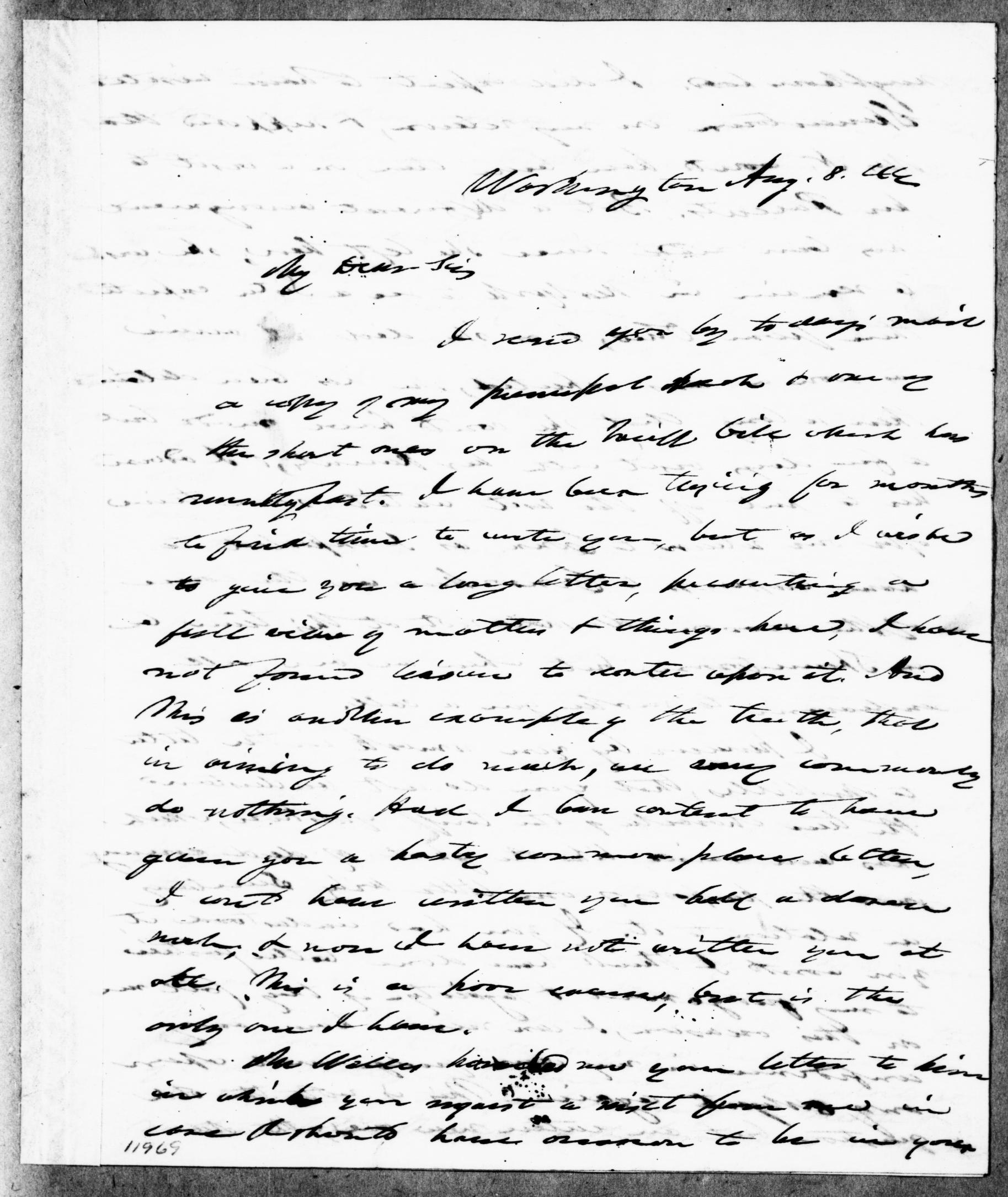 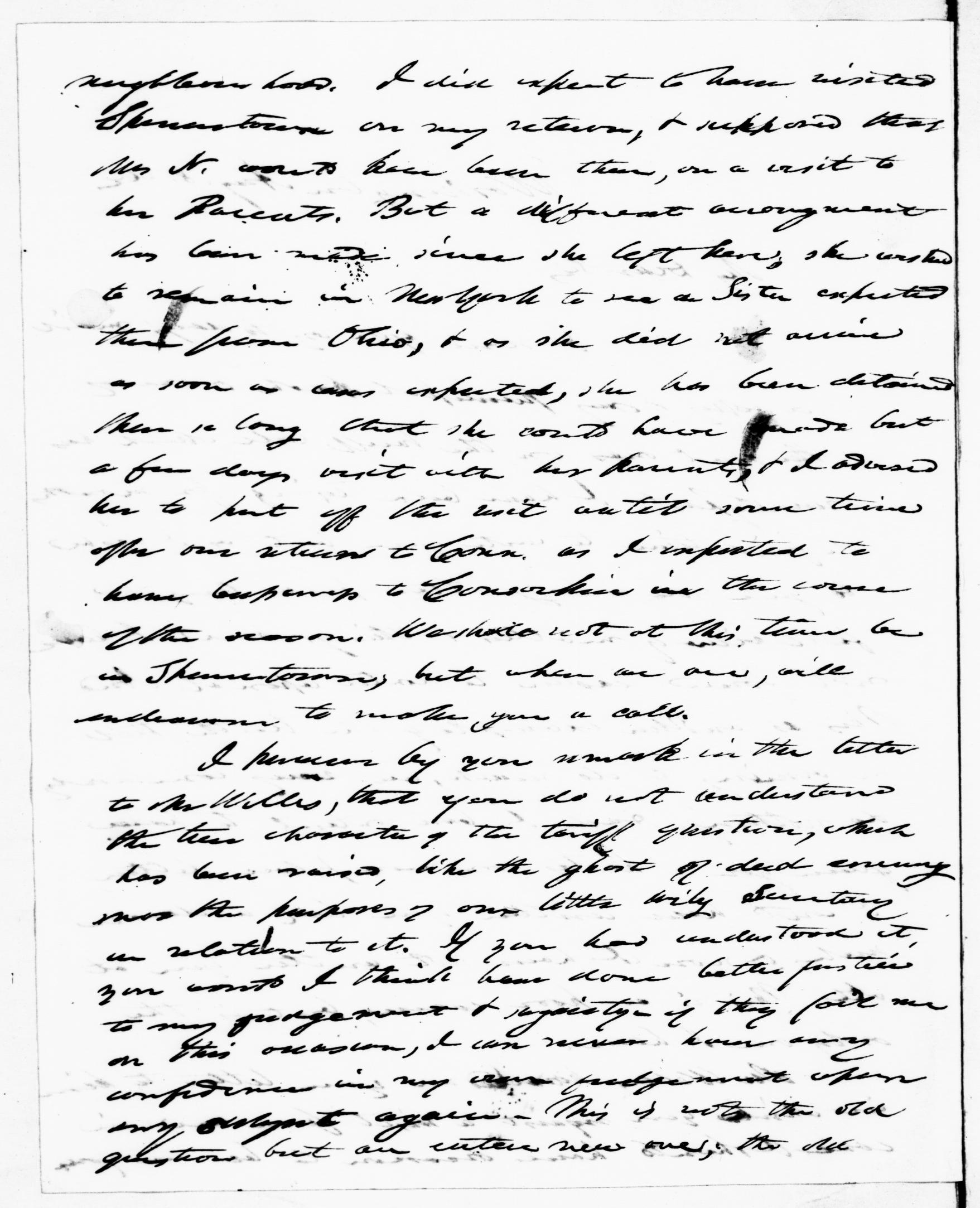 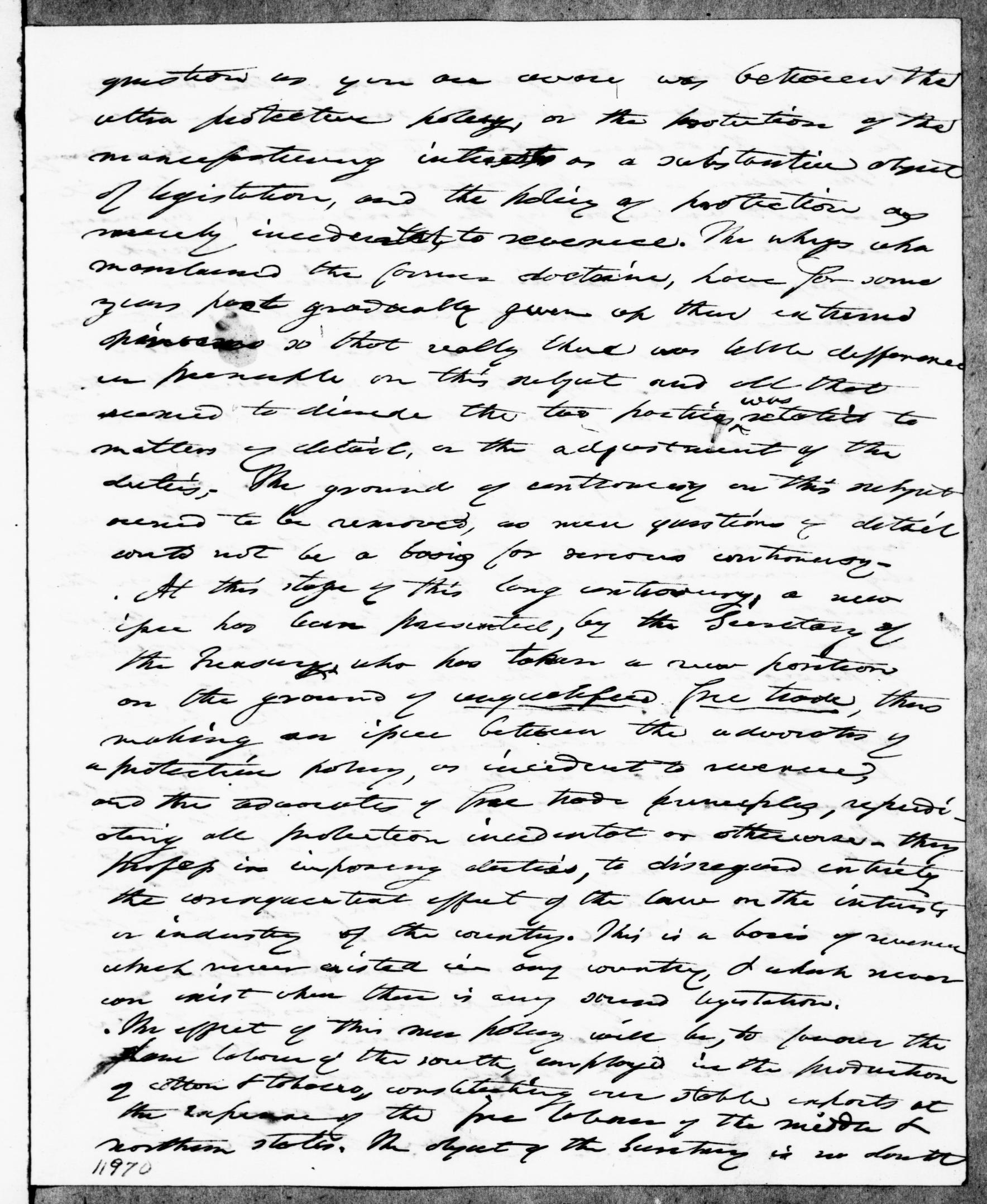 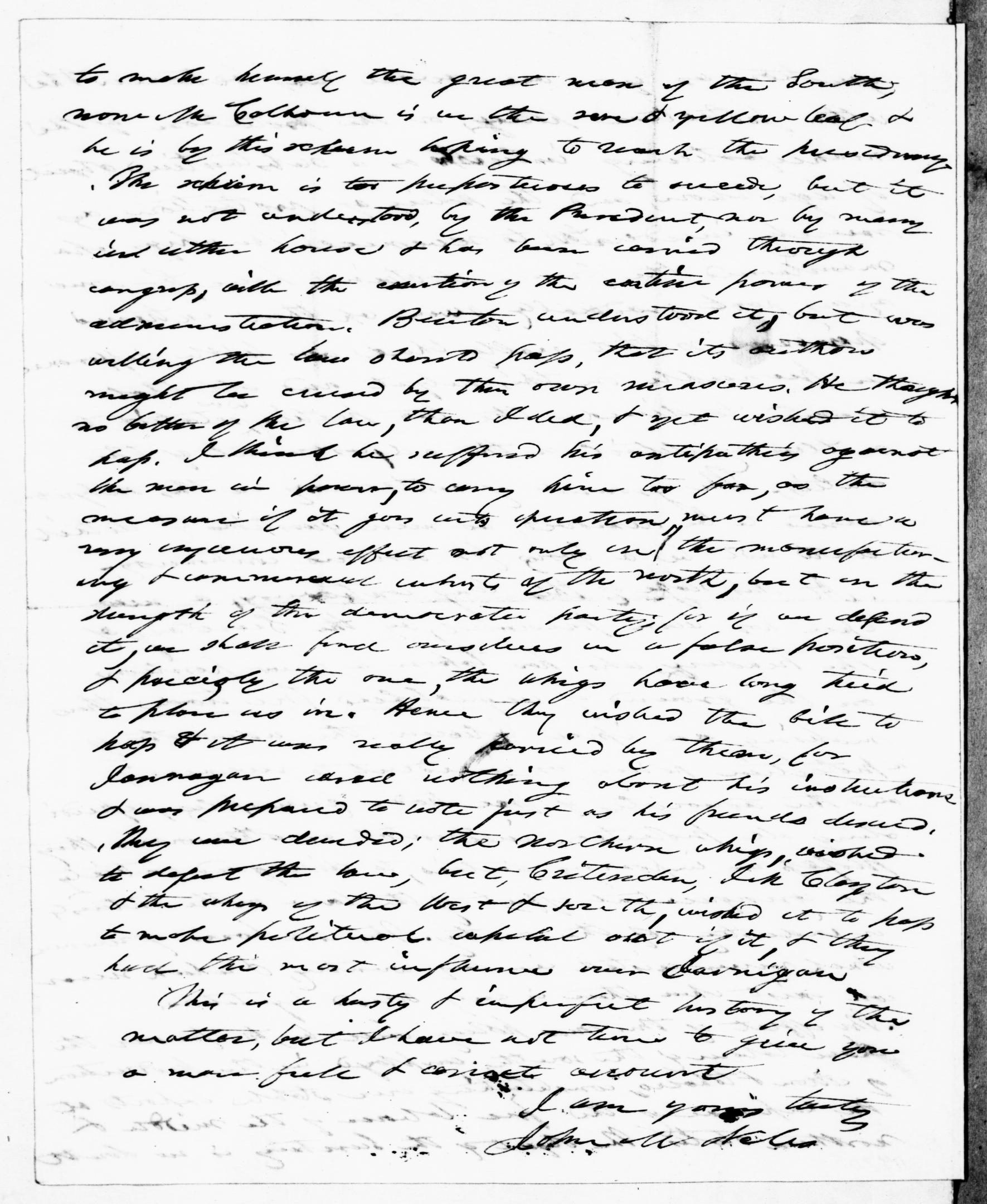