I have just returned home from a journey of more than five thousand miles, after an absence of nearly three months; and altho' much exhausted by travelling, by mental labor, & by the influence of an enfeebling climate; I am unwilling to withhold the expression of my opinion upon the strange developments which within a brief space have come to light. These developments I confess have gone far, very far beyond any conjecture I could have formed, and have deepened greatly my previous forebodings as to the stability of our institutions. There is too much reason to apprehend that we have not virtue enough to maintain those institutions, but that selfish ambition and avarice, are hurrying our Country to her ruin. The bitterness & animosity of J.C. Calhoun towards every one whom he has regarded as standing in the way of his march to power, could create surprise with no person. This predominating trait in the character of that man must be familiar to every calm observer of his life, and has been prominently displayed by the presses under his control, & in every public declaration on his part within the last eighteen months; in each of which he has betrayed his eager angry selfishness, & shewn that he was not to be appeased by any policy, nor reconciled to any man or measures, which did not hold him forth as primus in prinius. So soon as I learned his nomination to the State Department, & heard of the scheme for the immediate annexation of Texas, I pronounced them instantly parts of an insidious cabal, designed in the first place to prevent any of the friends of Calhoun from uniting with the Democratic party, and ^secondly^ to create dissention amongst the latter by an appeal to <base> or personal interests or prejudices, supposed to have existence amongst them. Notwithstanding the belief thus declared, and my fears for the consequences which might grow out of ^this^ perfidious device, I did hope that there existed still in the Democracy a sagacity which would not be imposed on, and a sternness of integrity incapable of being purchased by the bribe of acquisition regardless of whatever of wrong to others, or of hazard (or I may say of certain overthrow) to their own ascendency and to the principles they professed most to cherish, and which the shameless attempt to clutch the ignoble bribe might superinduce. But I have been deceived and mortified beyond measure. The Democratic party ^no not the party but certain men who have assumed to be its leaders^ have lent themselves in part to the gratification of malignant disappointment, & also yielded to the temptation of seizing upon a territory claimed by a power with whom the nation professes to be in amity. Your letter my dear Sir should have been the crowning claim to the esteem and support of every enlightened friend of natural law national faith and honor, of generosity, & I had almost said decent pretension to honesty. Its positions are irrefragable; its arguments none will be hardy enough to attempt to answer; but neither the one nor the other are suited to the freebooting character of the times, nor to the private views of men to whose aspirations the times unhappily are too aptly suited. Your qualifications for government are admitted and applauded; so too are your services, & the claims they give you upon the respect & gratitude of your country; your devotion to the true principles of the constitution are equally undeniable; but you are scrupulous about seizing on Texas in defiance of national faith & public decorum; therefore Mr Van Buren you are unfitted to be the President of these United States. What a confession this to be made in the face of a civilized world! I am as you know recently from an extensive region in the South; from the immediate confines of Texas itself; & I confidently believe, that the excitement we have witnessed originated with a few interested managers, & is quite limited in extent & <defence>: that its origin was not in the Southern country <illegible>. The attempts there at meetings resolutions &c have been limited in a great degree to the Calhoun & Tyler factions, & I have not met with more than one Democrat, in that region, who has said that he would regulate his vote by any question connected with Texas; indeed I satisfied that any question of the kind would have produced little influence with the people at large; and I have seen very intelligent men in the South, who are strenuously opposed to the acquisition of Texas, regarding it as a measure which must injuriously affect the price of lands & the progress of improvement in the Southern Country. And now my dear Sir, the penalty we are to incur for the absurdly and iniquity we have witnessed, is the election of Henry Clay; his partizans where I have been, (I met the nomination of Polk in Alabama) have received the doings of the Democratic convention with great exultation; declaring it an assurance that Clay is in effect to have no competition, but we may justly enquire what are the claims of Mr Polk, beaten out of sight in his own state by a man of yesterday? Admit that he is a worthy & orthodox man; this is by no means sufficient. Great results are not to be wrought by mere abstract reasonings and opinions; there must be something more—something specific something personal to appeal to, to awaken enthusiasm. Where is this to be found in the present case? I have been unable to say less than I have done, however useless may be criticism or speculation at this time. This much it gratifies me be add, viz, that ^I believe^ there is not one of my household, old or young who does not warmly coincide in the feelings and opinions ^I have^ herein above expressed.

yours with sincere respect & friendship. 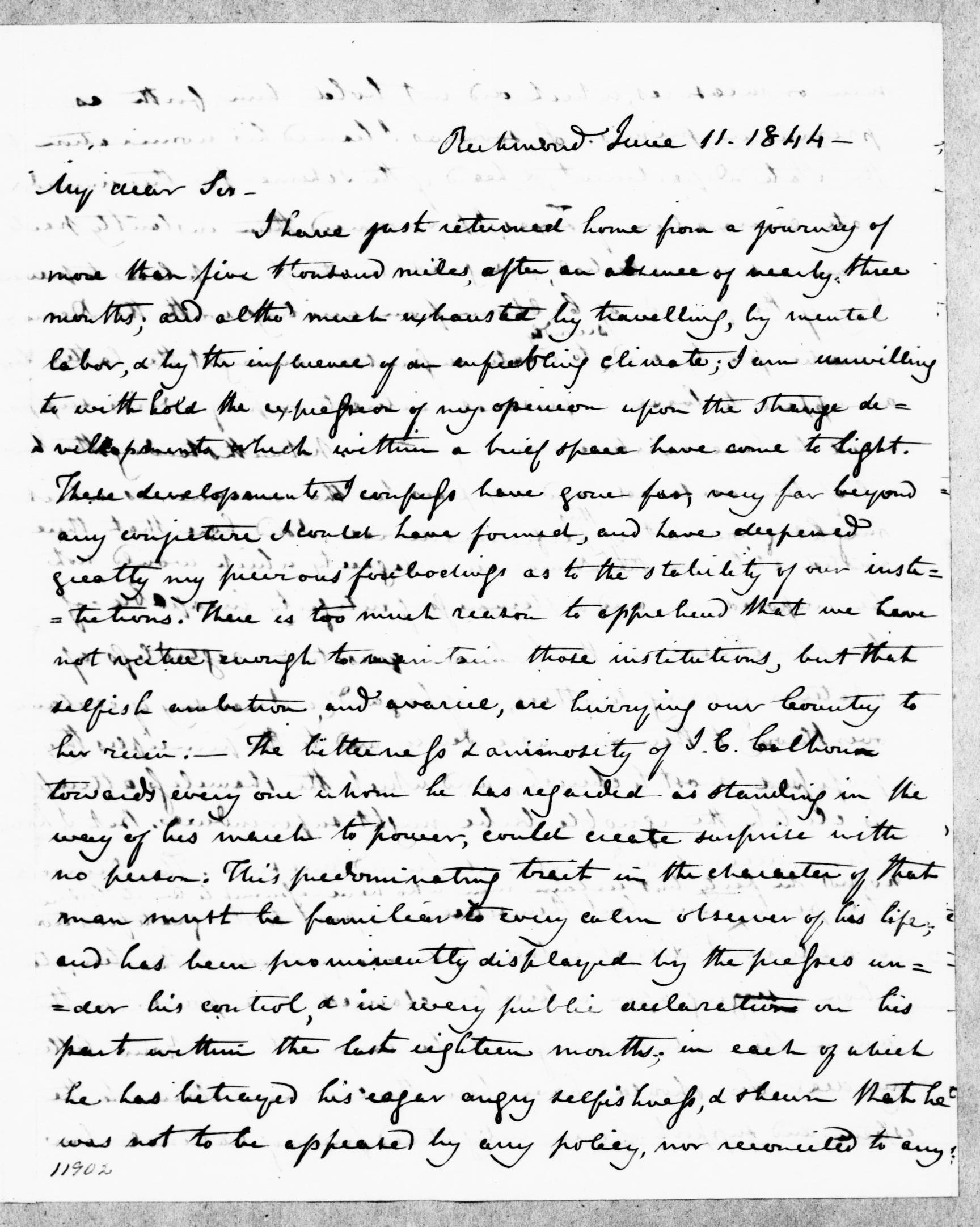 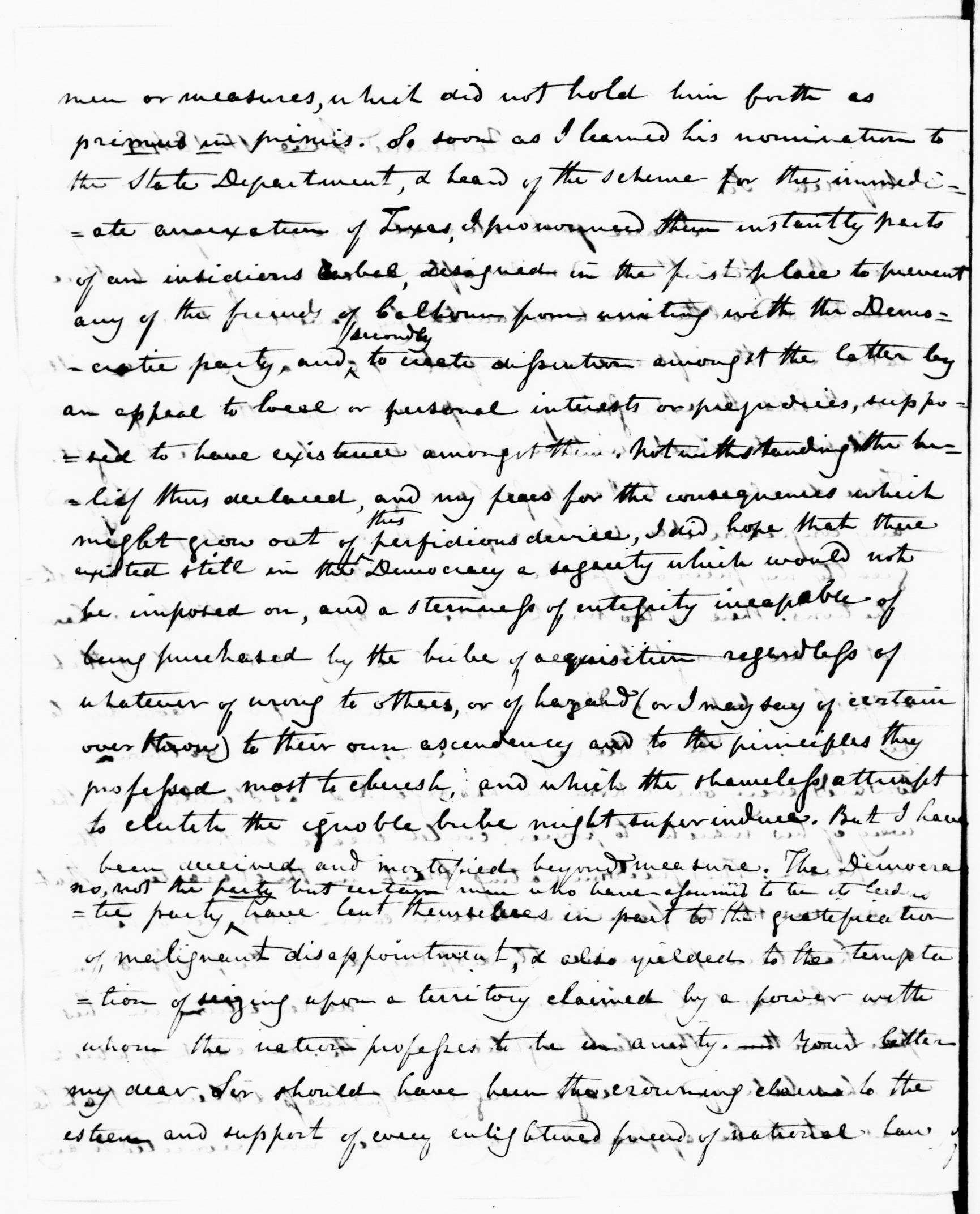 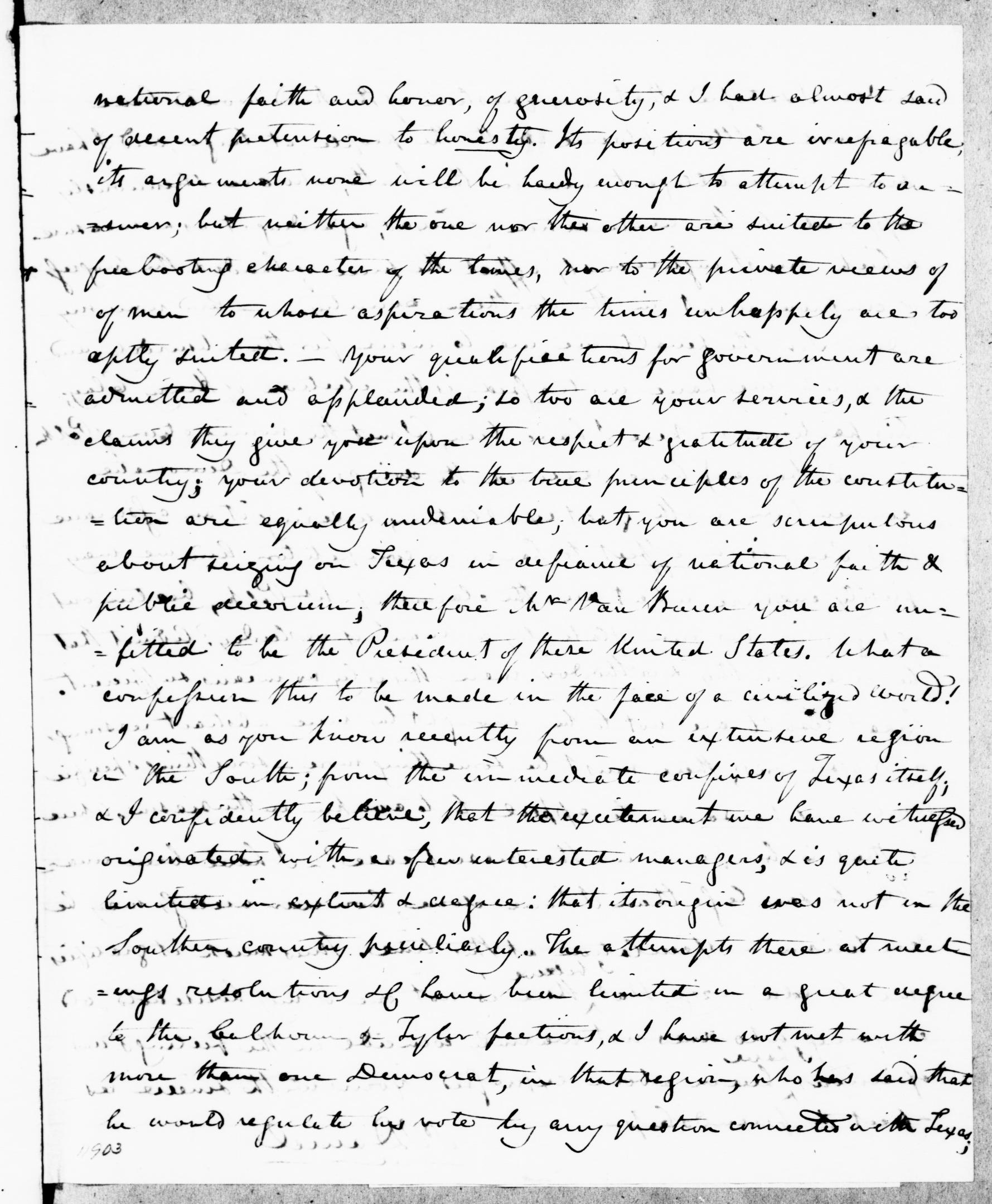 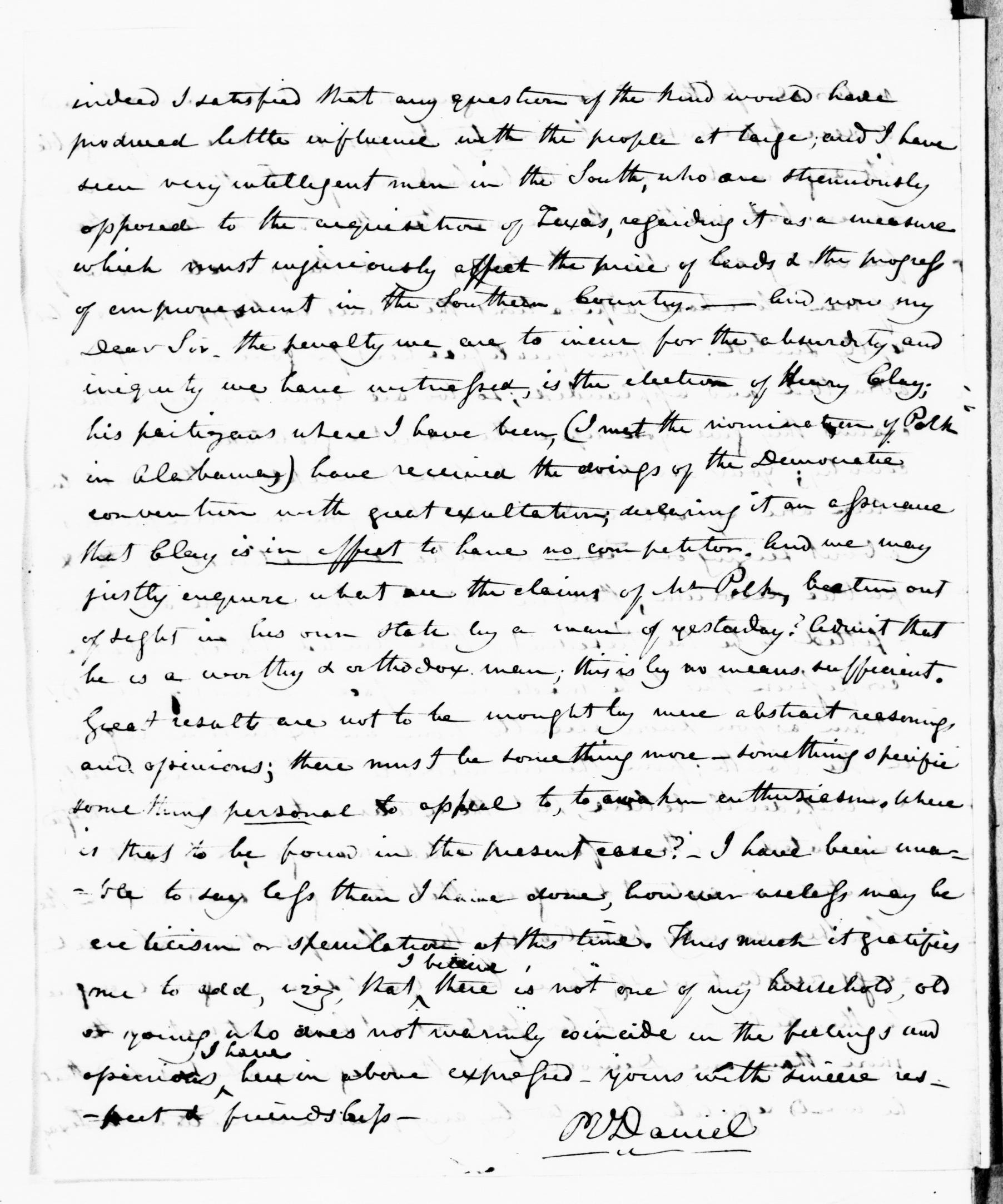 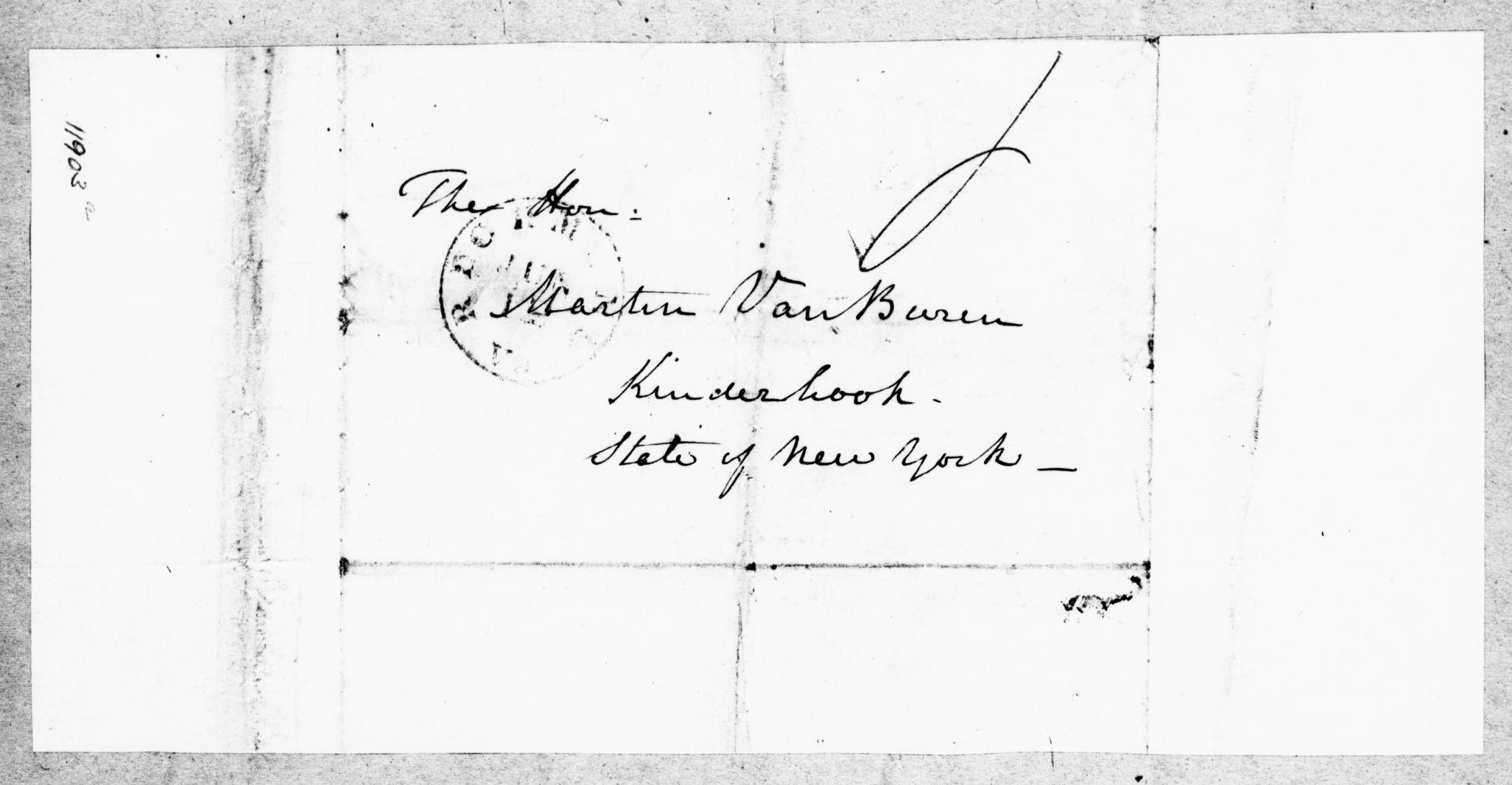