Well, the trial of the candidates for the Presidency is over and you are the only one who stands honorably acquitted by the court, the Jury and the Country. Those who were really your friends in the south and west, who abandoned you in a panic, are ashamed of themselves; your enemies, tho' professing democracy, in every quarter of the union, have been check-mated and have been obliged, like Saunders of No. Carolina, to swallow arsenic and then rejoice at the nomination; your available rivals have rendered themselves forever unavailable; and your political opponents are awfully indignant at the conduct of the Baltimore Convention and sincerely distressed that it should have treated you so unjustly as not to bring you into the field against Clay, especially after they saw you abandoned by so many promint prominent men in some of the strong-holds of democracy. You have no reason to regret the result, the ambitious traitors in all quarters had ruined our cause and you retire honorably from public life, with the applause of both divisions of your enemies, and with—what you value far more highly—the sincere regret and honest gratitude and friendship of 9/10ths of the Democracy—nay of every true democrat throughout the union. You have the further consolation that you were not a bidder at the Texas auction and altho differing with you on the Annex ^that^ question ^and^ believing annexation indispensably necessary to secure the permanent ^internal^ peace of the states on this continent embracing the anglo-saxon race, yet I think you have closed your public career with one of the ablest state papers you ever put forth, and which, whatever may have been its political effect, will secure for you a dignified rank <illegible> in the history of your country. And now, we of the rank and file, as we could not be permitted to fight under our Captain must beat Clay, who "forever is, but never to be blest"—not only beat him but disgrace him by closing his career in a defeat by one of our Lieutenants—that we shall do unless I greatly mistake popular impulse and public sentiment. As things were our opponents were going into the fight confident of victory which was half the battle. As things are and <illegible> <illegible> ^they^ will continue to grow ^better^ till the election the confidence and enthusiasm are and will be all on our side. I should have liked much to have had Wright on the ticket, as his would have been the next best to your own triumph and he would have been placed in the line of succession, but I suppose his views were in conformity with your own and had no doubt been communicated to you prior to your letter, and he could not therefore consistently accept a nomination even for an office from which you had not been unjustly excluded. But all thats past and we must now go to work and beat Clay. We can do that without this state but we can gain this also if we nominate for Governor some new and sound democrat from the western part of the state and harmonize and unite our whole party.

As you are once more a free man you must discharge your obligations to old Suffolk and especially to the banner town of Huntington. I wish you were with me now for our place looks like a magnificent paradise. Our House is enbosomed in a wood and surrounded by splendid laurels in full bloom. We have a garden full of the largest and most delicious strawberries and altho my orchard is only 18 mos old we have peaches, apples, apricots, nectarines, cherries, plums and quince. When you come let me know beforehand and we'll endeavor to meet you. My wife writes with me in best love to Mrs V. B whom she expects will come soon and in better health than when last here and best regards to the Major, your majesty and all who may be with you. 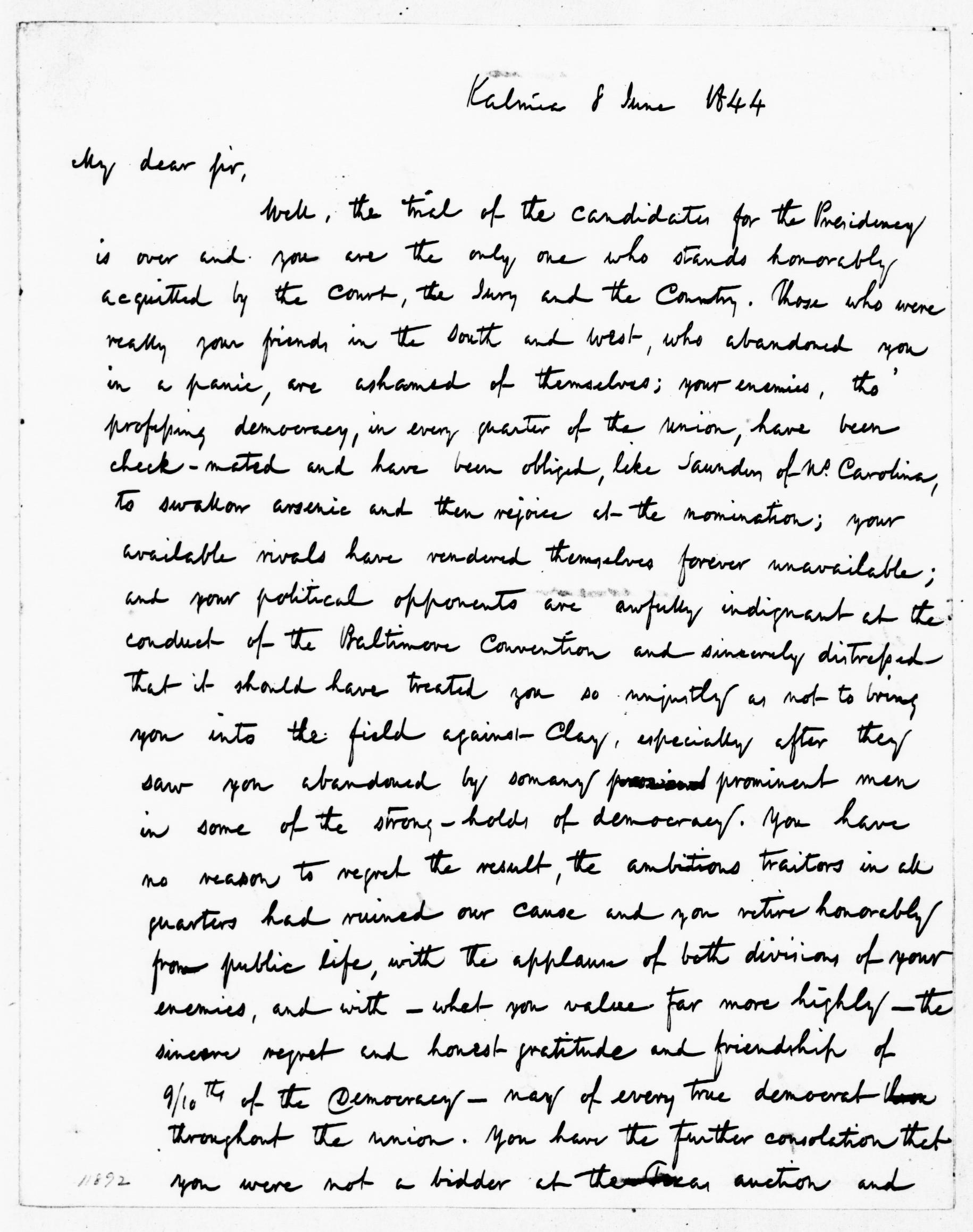 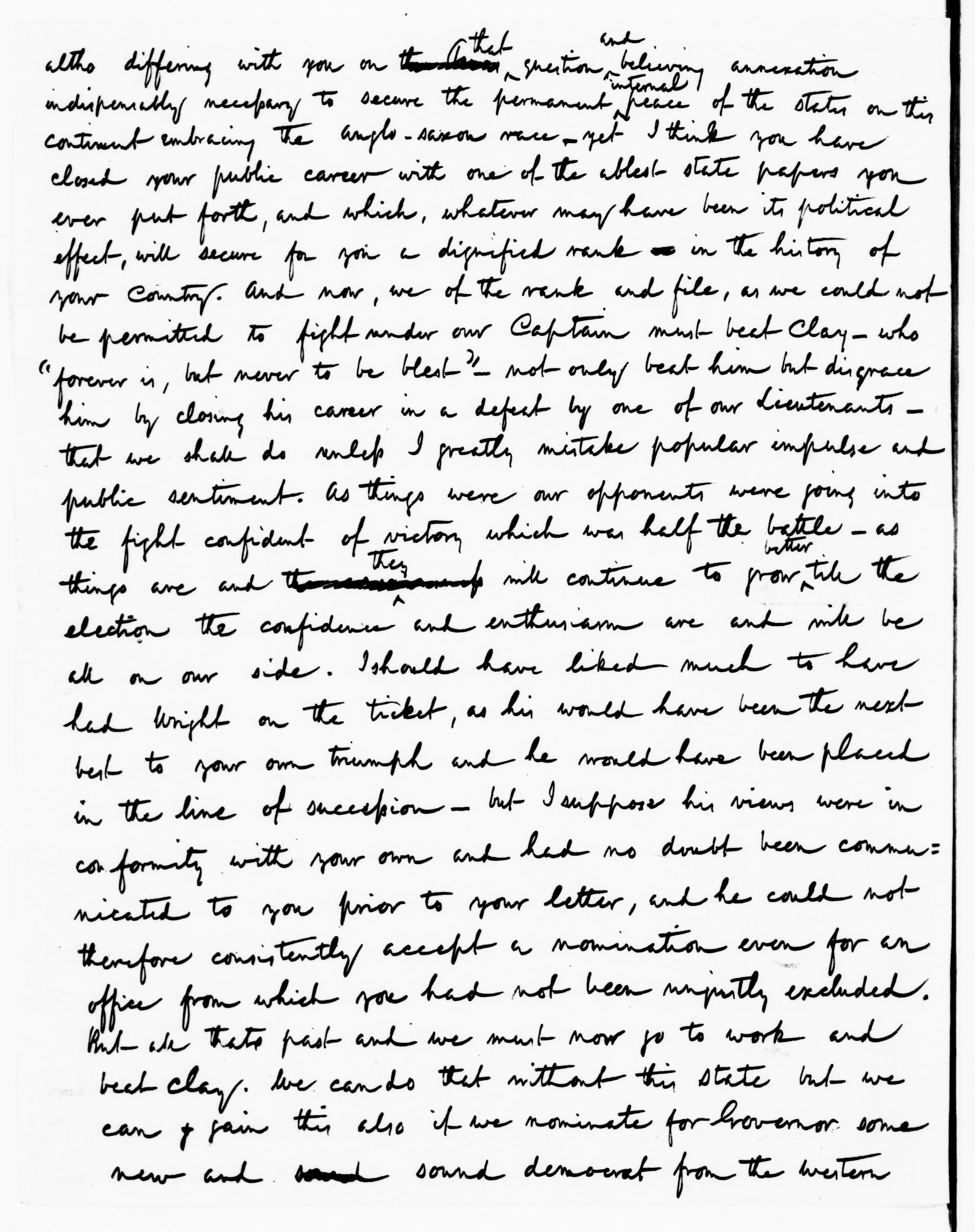 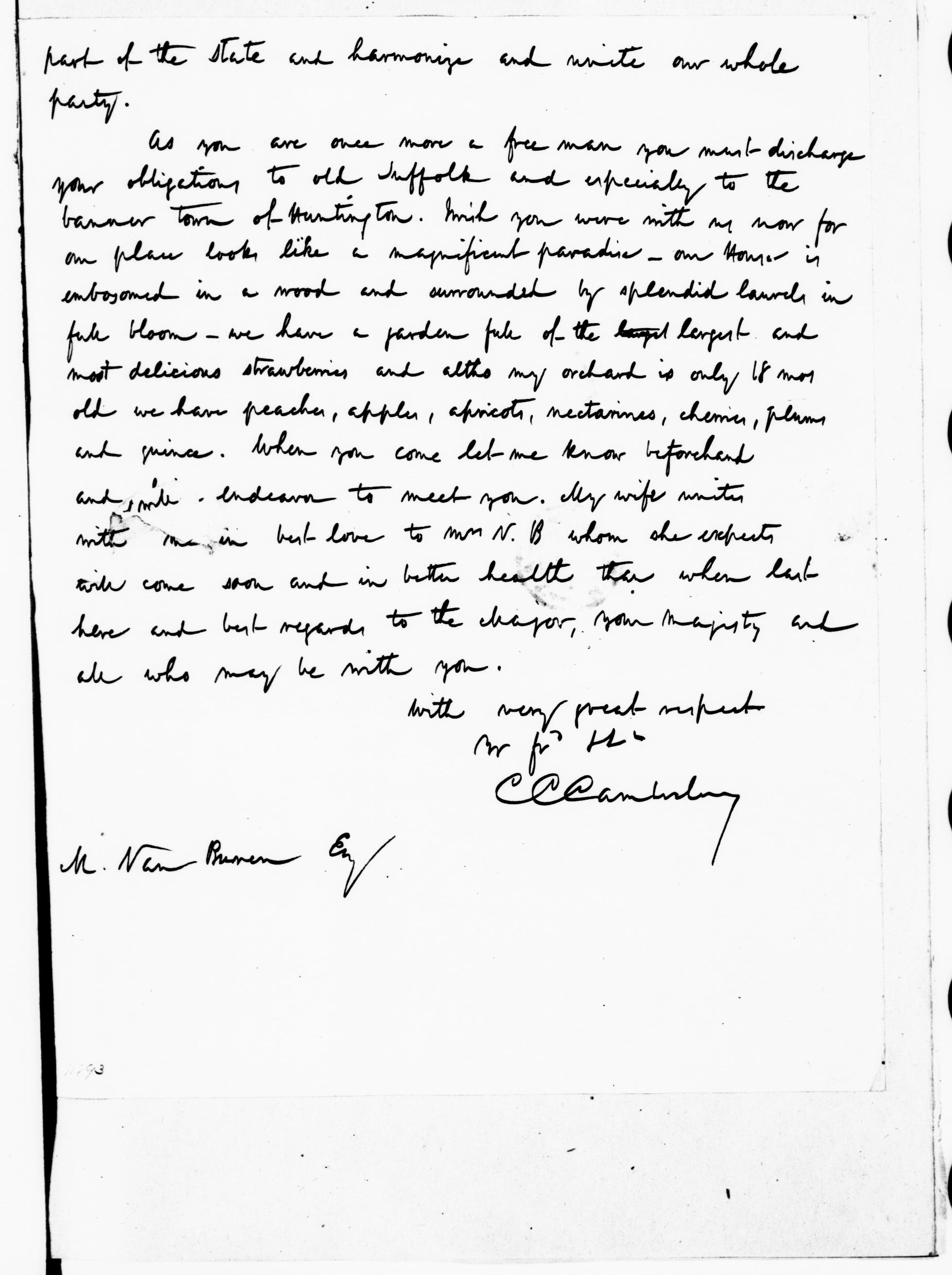 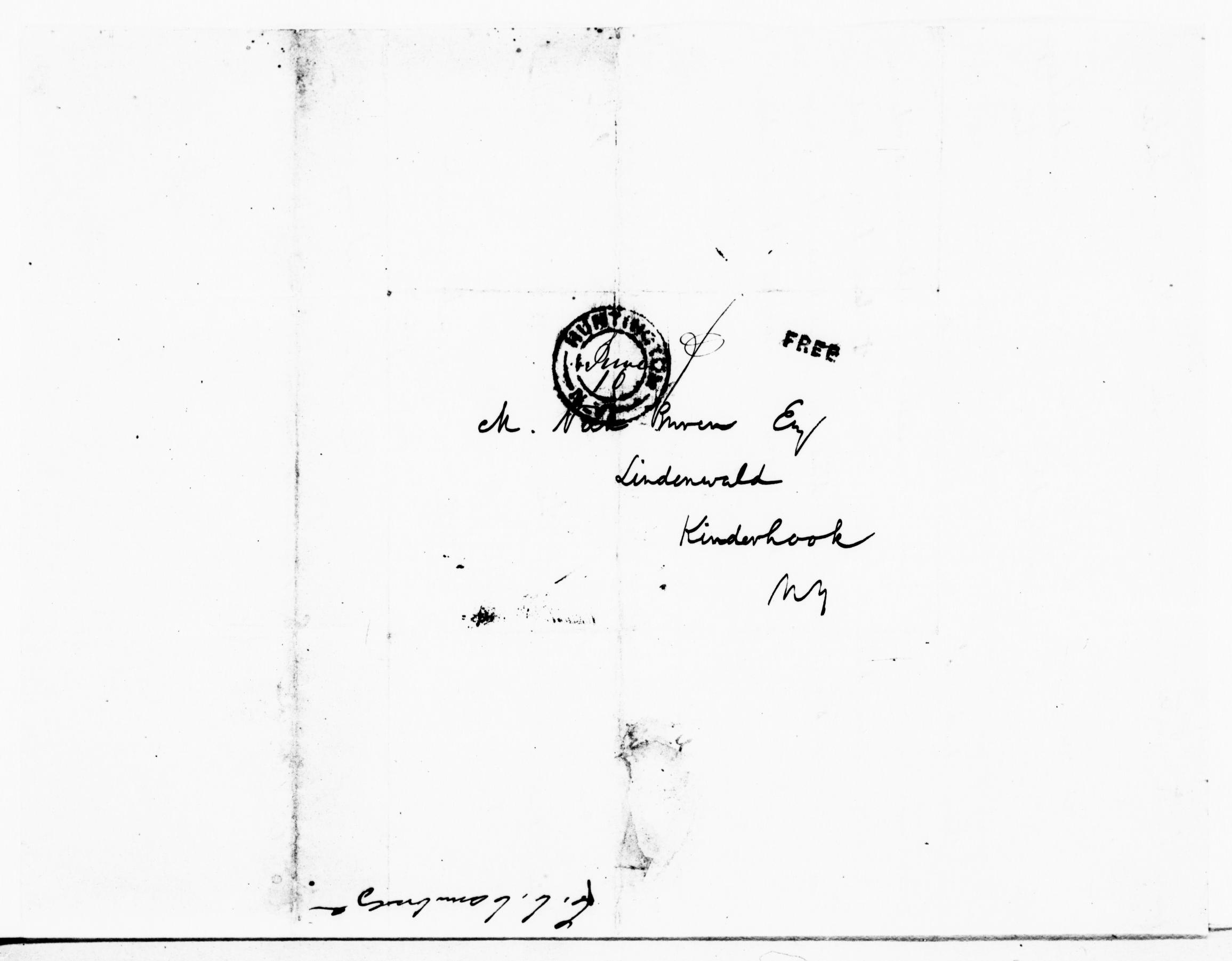