For over a week I have been sick and cannot now write with a steady hand. Good news I have none to give; but such as has come to me in my room I shall detail for your information.

I am informed and verily believe, that unless it be ascertained before the convention organizes that some person other than yourself will be nominated, it is the <proposal> of the southern delegates to propose immediate annexation as one of the tests, and if it be negatived, secede and agree among themselves upon a third candidate.

How the change of opinion among the members of Congress prior to the starting of this new question was produced I know not. I do not think it attributable to any organization among themselves, but rather to the continual ding-dong rung in their ears by a few members, the public officers in the City and the letters sent in through the influence of Tyler office-holders abroad. I do not think it would have been of any avail in the end but for this new issue. In my view of effect upon the popular mind, your letter came in the worst possible time. You were brought out at the moment when the Texas artillery was just ready to let loose upon Mr. Clay; you take off ^divert^ their attention from him and receive the shot which were intended for him. A day sooner, and his letter going so much further than yours, would have mitigated the violence of the attacks on you, or a week later and the ammunition would have been measurably exhausted. Men there were who would have raised the shouts against you; but it would have had less effect. At least, such is my opinion.

As it is, I find to my sorrow that some of your best friends have begin to despair not of your success only but of success under any one. I do not myself despair, but I am much discouraged. Certainly if the spirit exhibited pretty much all around, is to continue and spread we are as a party undone. Many of the southern and southwestern members declare they will vote for no man who is not for Texas. The Globe plays into their hands by ascribing the worst of motives and whether justly or unjustly gives occasion for increased violence. Benton roars like a madman when any doubt is expressed in his presence. Passion rules the hour.

In Congress as far as I can learn, the whole southern and western delegations with the exception of the Ohio members and now and then one from other States, are in favor of some other candidate than yourself. Three of the members from Missouri and the other Senator are against Benton on that subject; and it will take but little to make an open break. About half of the Pennsylvanians, the Jersey men with not more than one exception, some of the NewYorkers, one at least of the Connecticut men, those from Massachusetts and Maine and at least half of New Hampshire, are in the same humor. Many of them profess to prefer you to any man living, but they have caught the parrot note—“he cannot be elected.”

As to the popular <moment> you have probably as full means of knowing it as I have. Ca[r]ey, the new member from Maine, has called to see me and says the Democrats of his District are as unanimous for Texas as they are on any other question. I saw a letter from you. Mc Afee of kentucky today who says they had just held a large meeting at Harrodsburg without distinction of party, and with your letter and Mr. Clay's before them, resolved in favor of Texas with but 4 or 5 nays. Boyd of Ky was the <illegible> with me this morning and says his District before they received the letters, had gone in for Texas with almost perfect unanimity and although he prefers you to any man for the Presidency and intended to vote for you as a delegate to the convention, he shall be obliged to go for an annexation candidate.

Although there may be much more news afloat, I have not been in a way to hear it, not intending to embrace in the remark that which you have in the papers.

The malcontents, I believe, are anxious to run Cass; but unluckily as it is said he wrote three letters on the subject of Texas before the late outbreak which would not read well alongside of an full ^immediate^ annexation pledge, and these letters have been seen by men who would not be inclined to keep the secret. Some talk of you, Dodge, some of Buchanan and some of Stewart, but nobody of poor Capt. Tyler. Nor is there much said of Col. Johnson, and yet, in my opinion, Johnson and Cass are the only men ^seriously^ to be brought in competition with you, and of the two the chances of the former are best.

I cannot express what I feel on this subject. Such recklessness, such selfishness, such disregard of principle and justice, I did not expect to see in the Democracy of my time, and for what concerns the poor remnant of life now left me, I would fight its battles no longer. But like the Christian through life and unto death I mean to walk in hope that men will get better as the world grows older and that my children or my children's children may enjoy ^a^ the harvest of liberty and happiness from the seed which our friends have sown. Be that as it may, my activity in politics as I am at present advised, will end with the present year, not from personal disgust, but from a conviction that my health and happiness and family duties demand it at my hands.

I have written hastily; but I fear tediously.

Be assured that neither gloomy prospects nor defeat, nor the abuse of enemies nor the indignation of friends, nor prosperity nor adversity ^will^ <with> abate the confidence and regard with which I remain unchangeably 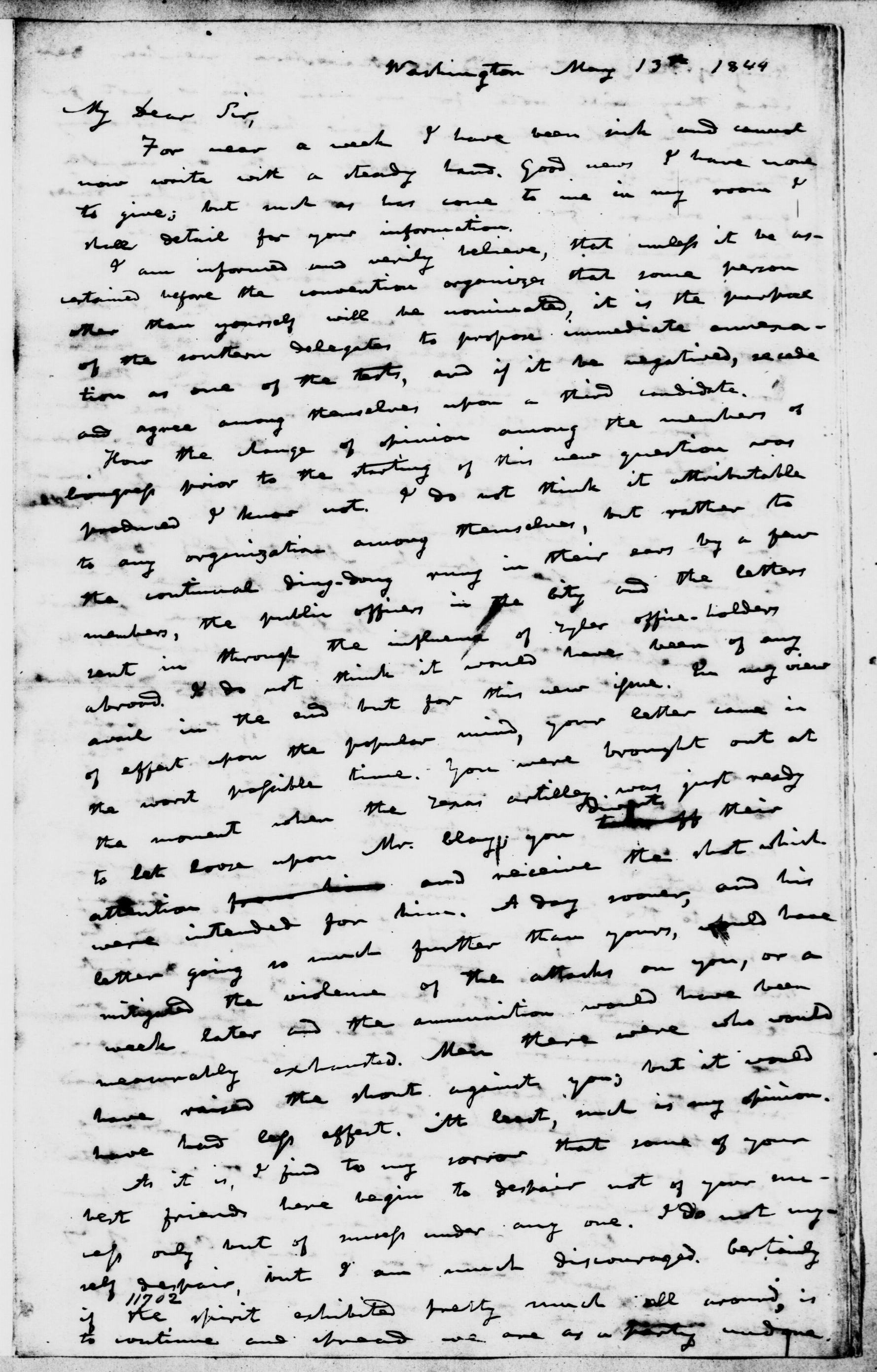 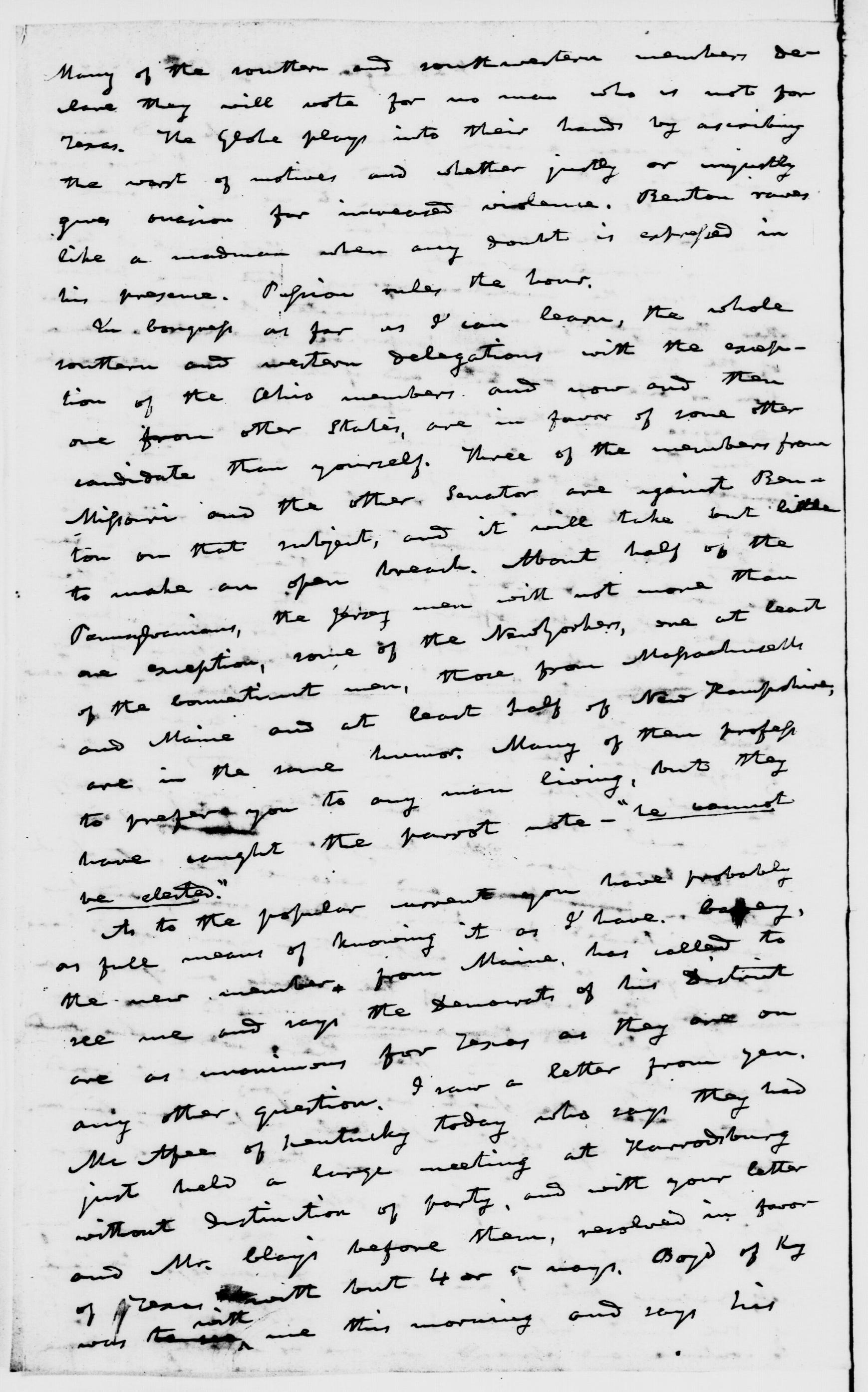 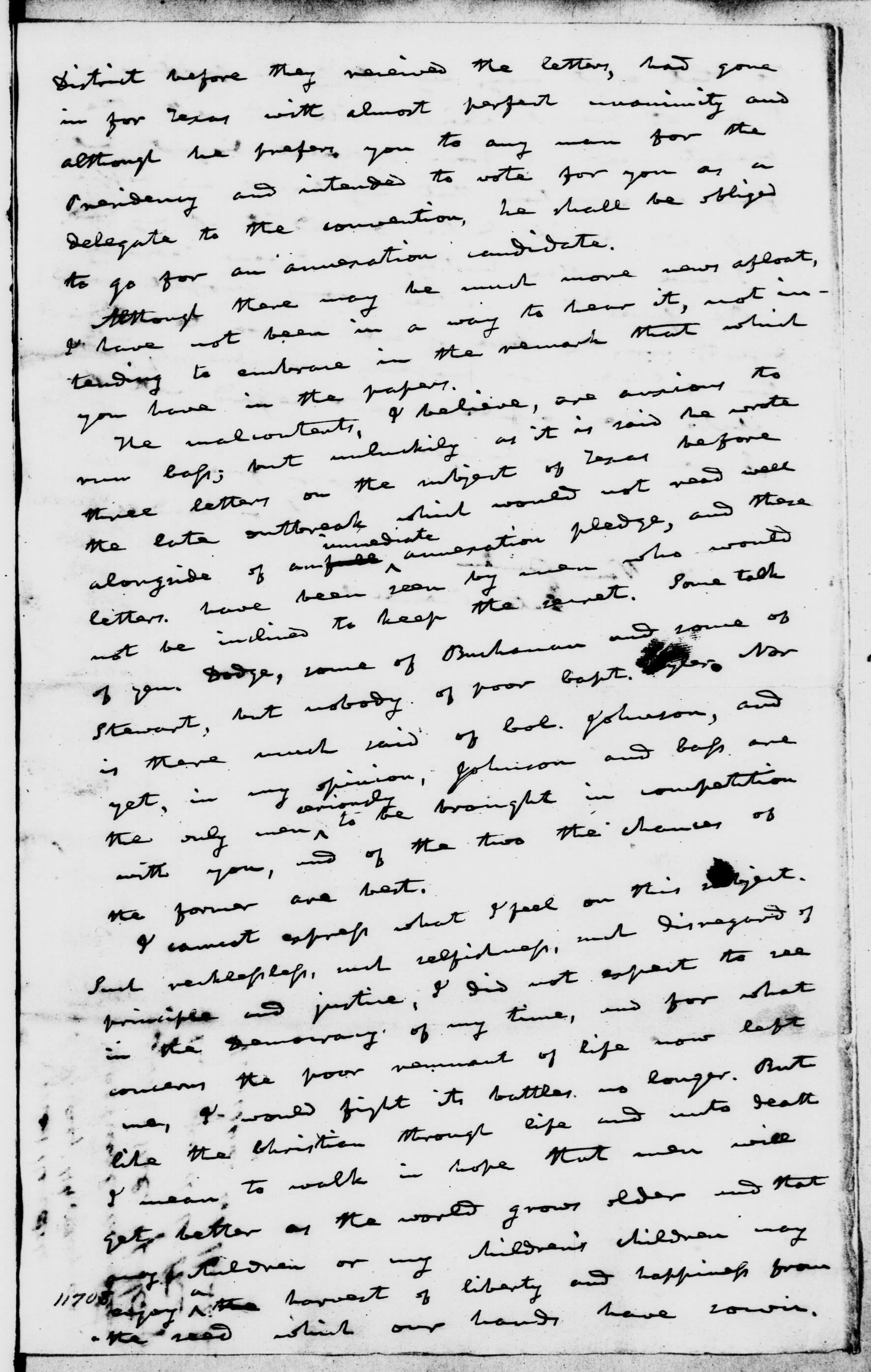 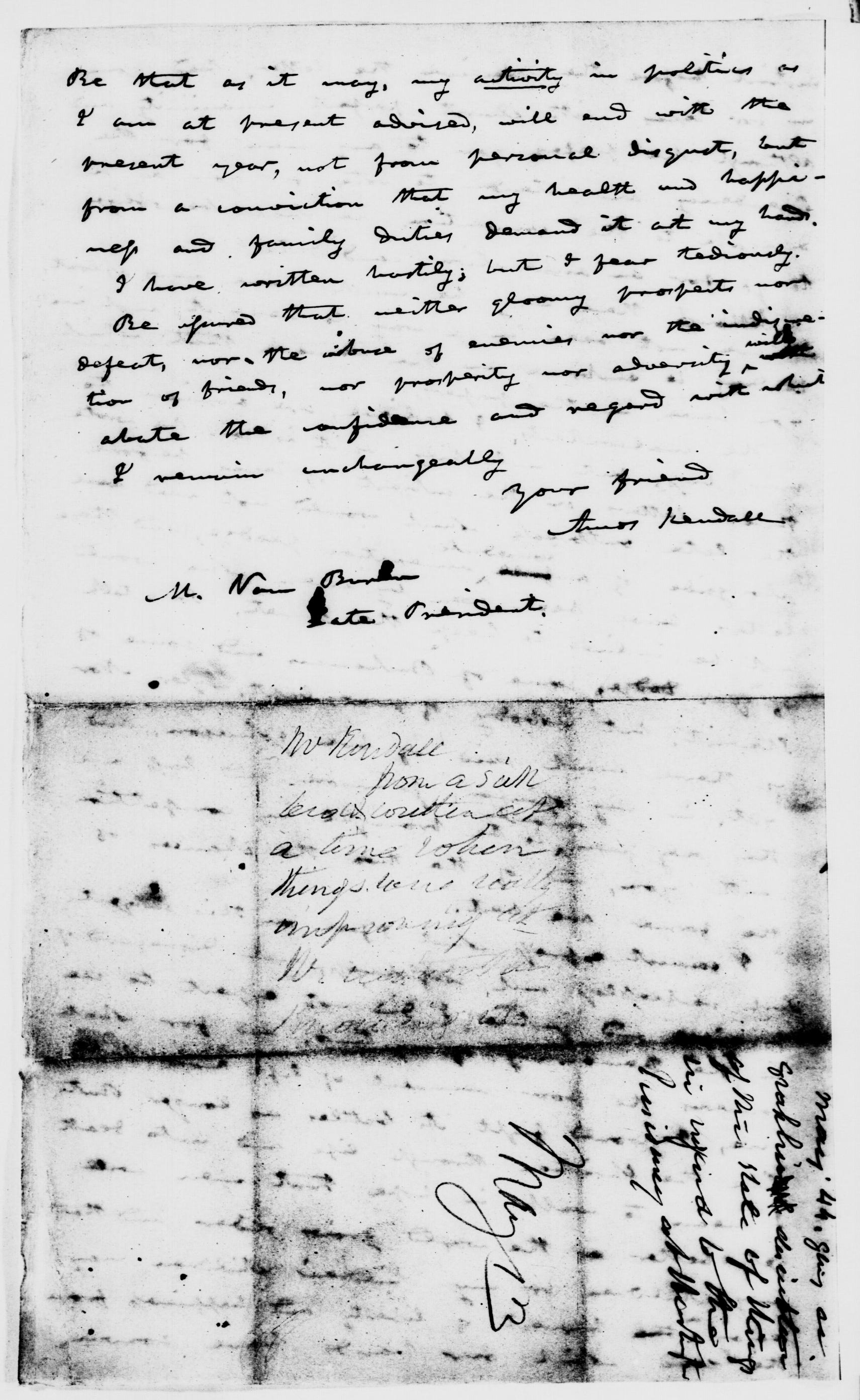