Again I write in my seat, because I cannot write at any other time. I beg you to believe that it is not because I have laid you so far on the shelf as some of our friends seem to have done, but because I cannot get the time, and that I do not want to disturb your equanimity of feeling, that I have not reported to you either the correct events here, or the communications I have received relating to your nomination.

I am constantly disturbed by the folly and passion of those whom I have considered very sound friends, but since the publication of the letter I have had none of that painful anxiety, which previously kept me very restless. I am content with the letter, and whatever may be the consequences to flow from it, I have now much less <care>.

I will therefore merely say, what you cannot fail to have perceived, that the state of things here is as bad as it can be. A very large proportion of those, who were sent here as friends, manifest very little of that quality, while the majority of those who are really friends have become so perfectly frightened that they do as much harm as the ill disposed.

The causes of this state of things really grows more out of the exertion of the executive patronage than any and all other causes, as I verily believe. I am ashamed to say this, and yet my most solemn convictions compel me to say it. You have not been unaware that many of the members elect of the present House lent themselves, as long ago as at our last session, to efforts to obtain small offices for favored friends, in the strange and peculiar condition of the appointing power here, at that time. Several of our friends of our own delegation were thuss involved, and gave us some trouble at the organization of the House.

After that time, our men became careful and I do not think any of them have gone farther into such <travails>. The members of other delegations, however, have done that, and, as you would expect, those from the Western States have been most willing and anxious upon this point, and have been therefore most committed, since the organization. These men, as you know, think more of their own re-election than of the nation; and you will not be much surprised when I tell you they seem to have come to the conclusion that this is the very last administration in the world for them, because they can get the persons they want appointed, each man for himself, and as is said with the free pledge, on the part of the executive, that the person appointed shall stand by the member upon his re-election, or that he will turn him out.

With light and selfish man, of whom I am sorry to say I fear we have an unusual share, this will act. And so far as this influence Could act, I am satisfied it had you, before we were wakened to it, knowing as it ^we^ did, that grumblings were frequent and broad in the House, but supposing them to be the usual troubles which we experienced here.

After this, I doubt not by suggestion from Mr. Calhoun or his friends, the policy was adopted to try the power of the higher offices upon a different class of men. This suggestion probably grew out of disaffections in the cabinet and desires of change there, and the vacancy upon the Bench. Gilmer and Wilkins were settled upon and had yielded to those temptations, before the <ermined> offer was made to me, and that offer was prompted by them to cause their acceptances. Of these facts I was fully satisfied when I received the offer in <farce>, tho' I did not know of them, at the first rumors that I was to be offered. I must not let you infer that this suspicion, or knowledge, changed my inclination as to an acceptance, or declination, of the office, but I mention the fact to show that, since that time, I have been able to look more intelligibly upon subsequent movements.

After this, and after the appointment and acceptance of Gilmer and Wilkins, came the catastrophe, as a God send, as those appointments had produced very little sensation, or influence upon our friends and party. The selection of Messrs. Calhoun and Mason, and the appointment of King, and the acceptance of all these men, after the matters to which I have alluded, appeared to produce abroad a general impulse to countenance the idea that all the rogues, who had sought and accepted office, had acted rightly and wisely, and were to be countenanced by the leading and wise men of our party; and you cannot conjecture how soon we saw and felt here the boldness thus inspired, how soon those men flocked here in crowds, and how soon the disaffections in the House against your nomination became loud and confident. You cannot be surprised that all this class of men were unwilling to trust you, and if there may have been doubts in the minds of the weak members of the House, who had been drawn into this influence, you will be aware that those holding office in our State could soon satisfy them that they must abandon that trust, and they were here from our State, in abundance, to tell it. At this time it was, I am satisfied, that Slamm wrote his last letter from here, for he was here, upon both occasions, with a company seeking the plunder of the custom house.

In about this state of things Mr. Calhoun came to the State Department, and you can see, at a glance, what a charming state of things it was for him, and he has improved it, but has doubtless used his utmost efforts to make everyone believe that Texas was at the bottom of all these dispensations of executive bounty, and that every man must be for Texas instantly to be within the pale for safety and future favors. Then, I deliberately believe, that the case made up to present the treaty upon, had from the beginning less made up to render it impossible that Northern men could go for it, and that, Mr. Calhoun fearing Mr. Upshur had not secured that point, and seeing that the Globe had come out for Texas, wrote his despatch to Packenham to make that point perfectly secure.

Your letter came prematurely upon this place, of which, of course the public could know nothing, and hence the necessity of thinking your letter as against Texas, and to excite passion in regard to it, before it could be read as considered. Every effort was made to effect that and it has been quite effective for the moment here. I have even found, today, men of sense in the House, who have not read a word of your letter, and admit it to me, but declaim against it most passionately. The thing is yet very unsettled, and many of our good men are greatly frightened. You will have seen the course of the Globe to strike these intrigues, and call the public attention to them. This was done, because it was found that letters were writing to the delegates to our Convention to influence and frighten them, and that Tyler was sending agents and tendering offices to many of them, in Pennsylvania, Massachusetts, and elsewhere. We have now before the Senate the name of Cracker, on of our delegates from Massachusetts, for the office of Collector of the port of Boston.

You have seen the movements upon the Collector's office of New York, and we have every reason to believe that the reports in the papers there are well founded. In Baltimore facts less extensive, but equally corrupt in principle, are also reported.

The movement of the Ohio delegation was a salutary one of them. It has created high passion on the part of those who have been dabbling. Two meetings have been ratified and passed over, and nothing has appeared but Kennedy's letter in the Globe of Saturday, and that of Cross of Friday. We are told, at this moment, that 50 are to come out in the Globe of this evening. That I doubt, but if it should be so I shall think it well. Let us see the men.

Walker is with Tyler and has been for the whole session. Buchanan was quite right until the announcement of the Justice Baldwin's death. From that moment the passion for the Judgeship made him giddy, and on Friday he went home, as it is said, to Consult in relation to withdrawing his withdrawal, and taking his chance before the convention, considering you a dead cock in the pit, with the assurance that the judgeship shall be held open for this inquiry. The object here is to unsettle the boat of the Pa. delegation, through him, if possible, and then make him the judge, but I doubt if he sees this object.

A word as to yourself. My deliberate conviction is that you should stand steadily on, in the position you occupy, and leave to the Convention the responsibility of disbanding the democratic party of the Nation, if that must be done. This, I believe, is the opinion of all the true men here, and I am so Confident it will be yours, that I do not borrow a moments's trouble about it.

I do not think I ever wrote so long a letter as this before. The whole is written in my seat, under running debate upon all sorts of subjects, and I cannot re-read. Do burn, if the sheet ever reaches you, and acknowledge the receipt, that I may be easy about it. 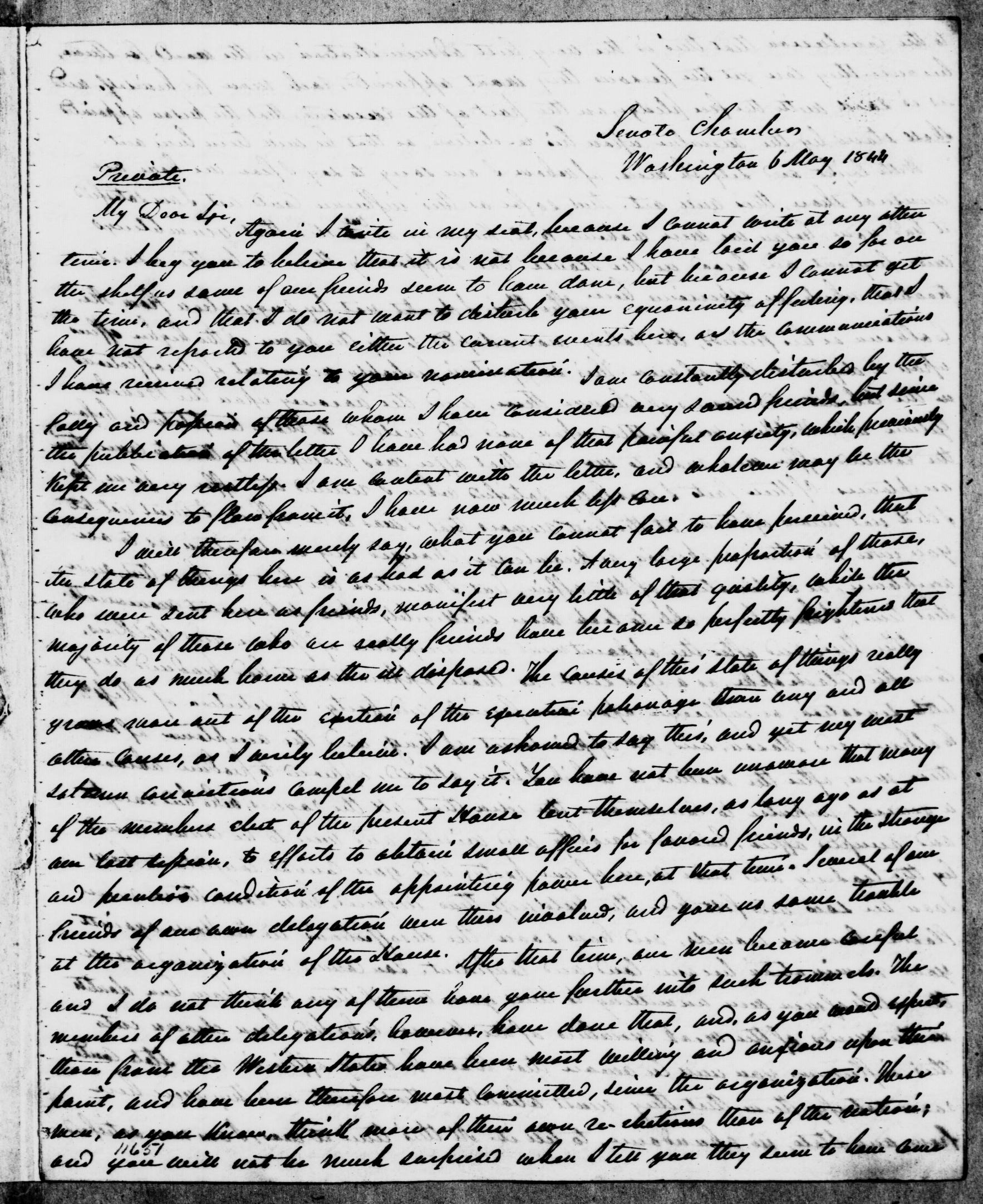 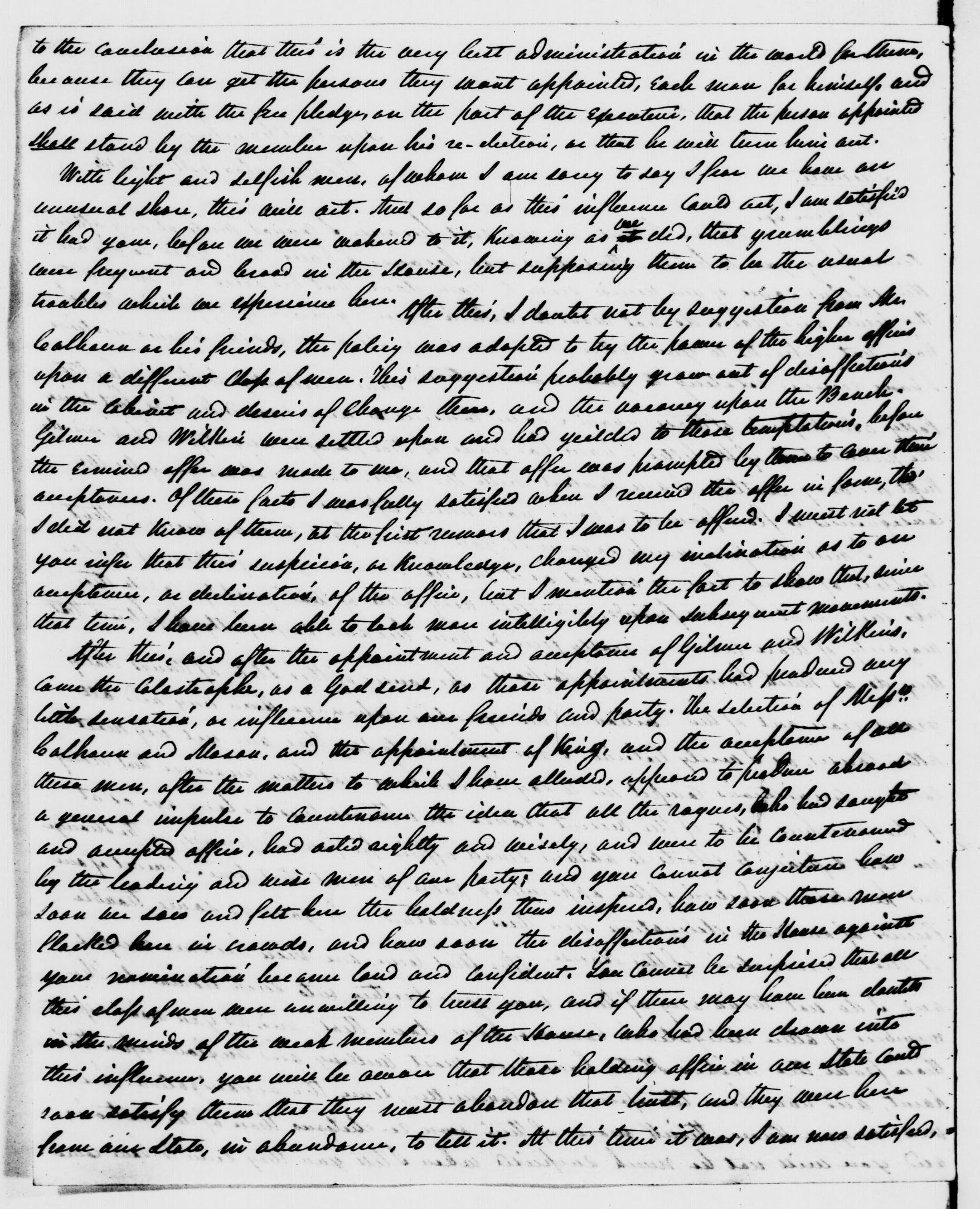 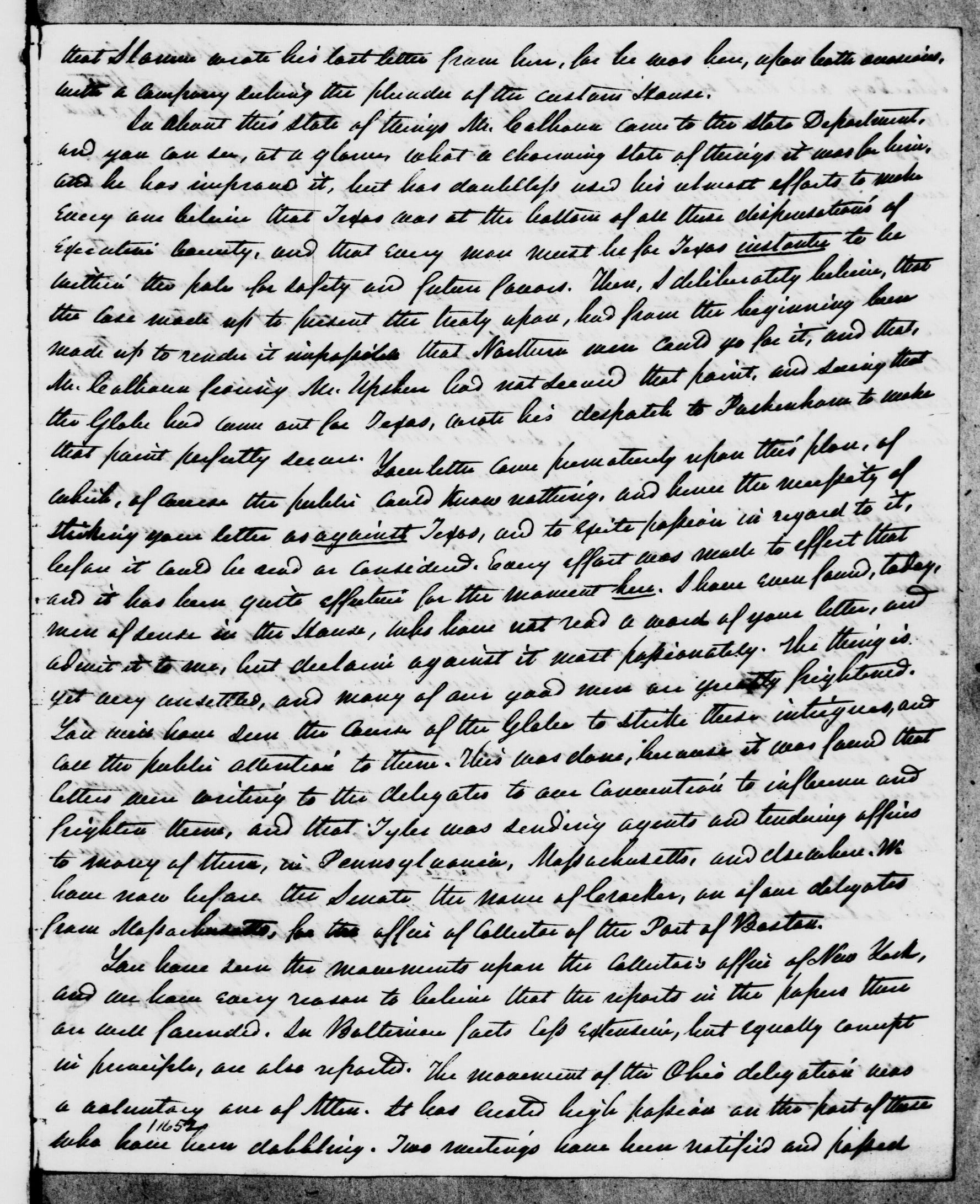 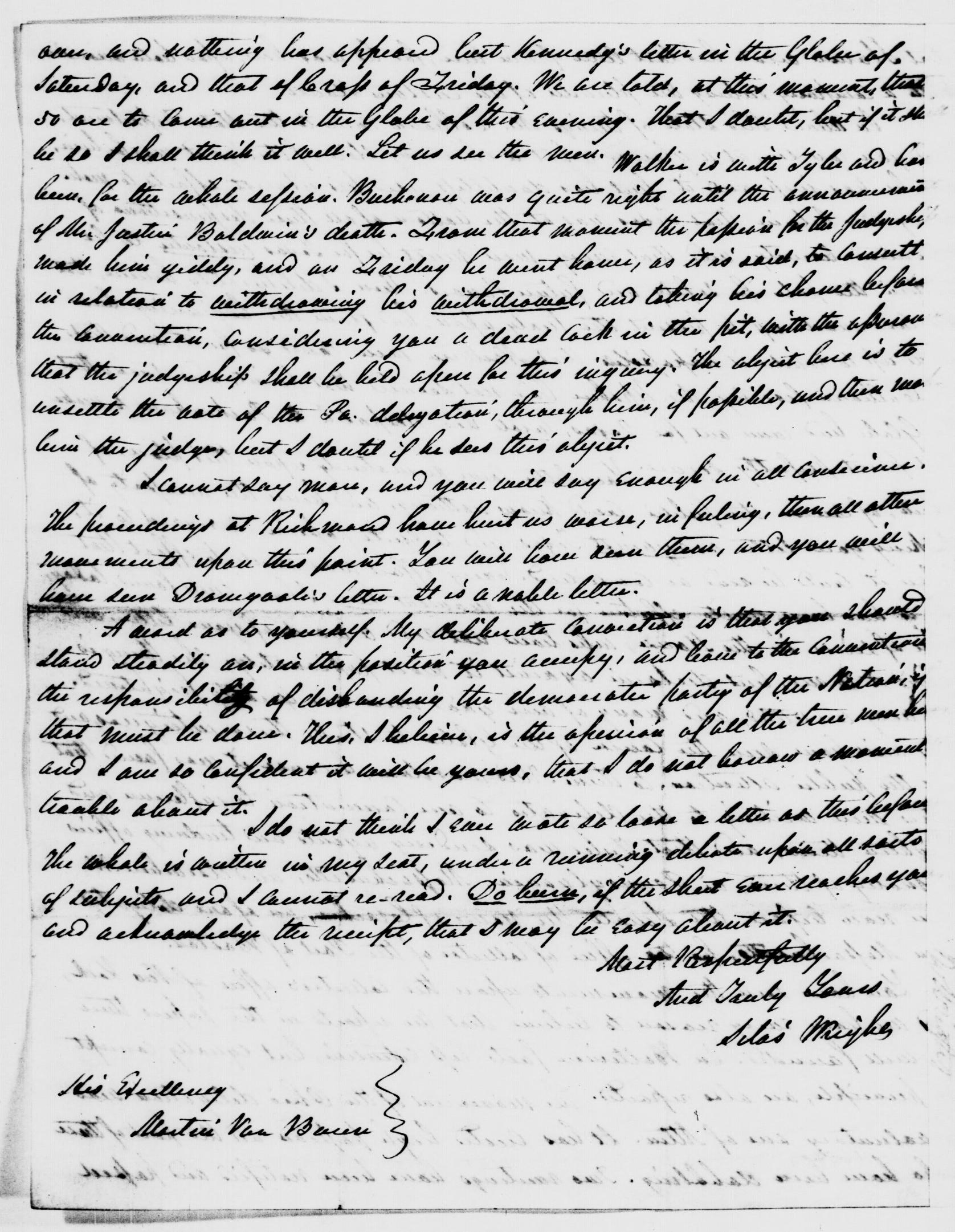