Your package came to me night before last. I did not attempt to reply to it yesterday, because I found our friend Mr Butler was here yesterday, and I wished to see and converse fully with him, before I wrote to you. I have had a good deal of conversation with him and he has just left me. He has heard more of the views in the court <quarter> than I could Know, and you will hear from him today or tomorrow.

I have but a few moments now, and as he will give you all the news I have and better and safer views than I could express, I shall not attempt to speak of the question at this time.

I have endeavored to make the enquiry you requested me to get Mr. King to make for you and my present object is to give you the result.

I find that the appropriation “for the outfit and salary of a diplomatic agent to be sent to the Republic of Texas, whenever the president of the United States [may receive satisfactory evidence that Texas is an Independent power, and] shall desire it expedeint to appoint such ministers,” was inserted in the bill making appropriations for the Civil and Diplomatic expenses of the Government, for the year 1837, on the motion of “Mr. Thompson of South Carolina,” (General Waddy Thompson of Course) and I have quoted the words in the act. The motion was made on the 28 February 1837, and the vote taken in the House of Representatives, by ayes and naes, on the same day. The vote stood 179 Ayes 76 Naes. I notice that the republicans of our delegation were divided, the greater number voting aye, and that very much the largest portion of the Naes were Whigs. The bill was ordered to be engrossed on the same day, and without any other vote touching this proposition.

The bill came to the Senate with the amendment incorporated as above. It was acted upon there on the 1st of March, and Mr. Walker moved to amend this amendment by striking out the words “may receive satisfactory evidence that Texas is an independent power, and.” The ayes and naes were taken upon this motion and the vote stood 16 Ayes 21 Naes. There were just about an equal number of each political party voting upon each side. Webster and myself are in the negative and Calhoun in the affirmative. This is the whole material history of the appropriation, as no effort was made in the Senate to resist, or to change its form, other than that above mentioned. The bill was engrossed immediately after that vote. The Act was approved by the President on the 3d of March.

On the same day he sent to the Senate a message, a copy of which I send to you, and the extracts from the executive journal will show you what was done with the nomination. No Ayes and Naes were called. I presume you may have a Copy of this portion of our Executive Journal, and if you have not, I must inform you that I have taken these extracts without leave and against our <State>, and therefore you must consider them strictly confidential as coming from me. A copy was doubtless sent to you as President.

The resolution of the senate is copied exactly in the message of the President, if you add the words “Resolved, that” before the marks of quotation. It was introduced by Mr. Walker, Jany. 12, was considered on the 10 Feby. and laid upon the Table without a decision. On the 13th a motion to take it up for consideration was negotiated 32 to 12. Clay and Calhoun voting aye. Feby 27 it was again considered, and on a motion by Stubbard to postpone it to Wednesday (it being Monday) the vote stood 25 ayes 21 Naes. Clay and Calhoun no; Webster aye. March 1. it was again considered, and on a motion of Mr. Buchanan to lay it on the Table, the vote stood 19 Ayes 22 Naes. Calhoun no. On a motion to amend by <Burnell> so as to declare that it would be expedient to recognize the Independence, when satisfactory evidence should be furnished to the President that Texas was in fact independent and able to maintain it, the vote was 16 ayes 25 naes. Calhoun no. On the passage of the resolution the question was 20 Ayes 19 Naes. Calhoun Aye. Neither Webster nor Clay voting upon either occasion.

On the same day, but subsequently, the appropriation bill was reported by me and the vote taken upon Walker’s proposed amendment, as above, Clay not then voting.

I send you, in a separate envelope, a sheet of our journal containing Genl Jackson’s message to Congress of the 21 Dec. 1836 upon this subject, that you may fully understand his executive message, sending the nomination.

I fear I acted uniformly against Walker’s resolution, upon every motion made in respect to it. On the 2nd March Ruggles moved to reconsider the vote passing the resolution. Mr. Calhoun moved to lay that motion on the Table and the vote stood 23 ayes 25 Naes. Calhoun and Clay aye, and Webster no. Upon the question of reconsideration the vote stood 24 ayes 24 naes, so it was lost. Webster aye. Calhoun and Clay no. That ended the matter.

I will do the <worst> to Hammet. I think he is not hostile, but he is rash, impetuous, and not a little influenced by the Calhoun influences. 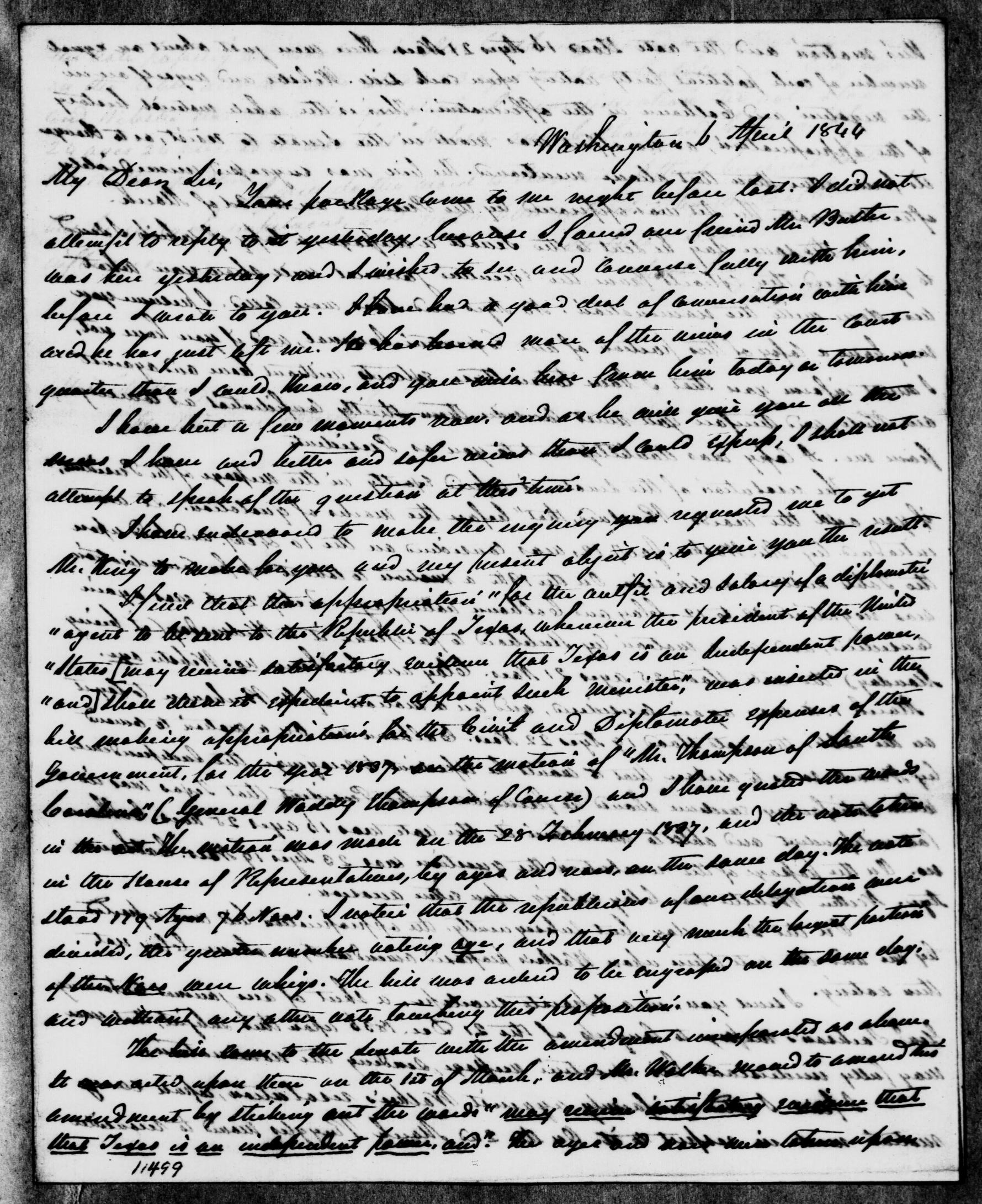 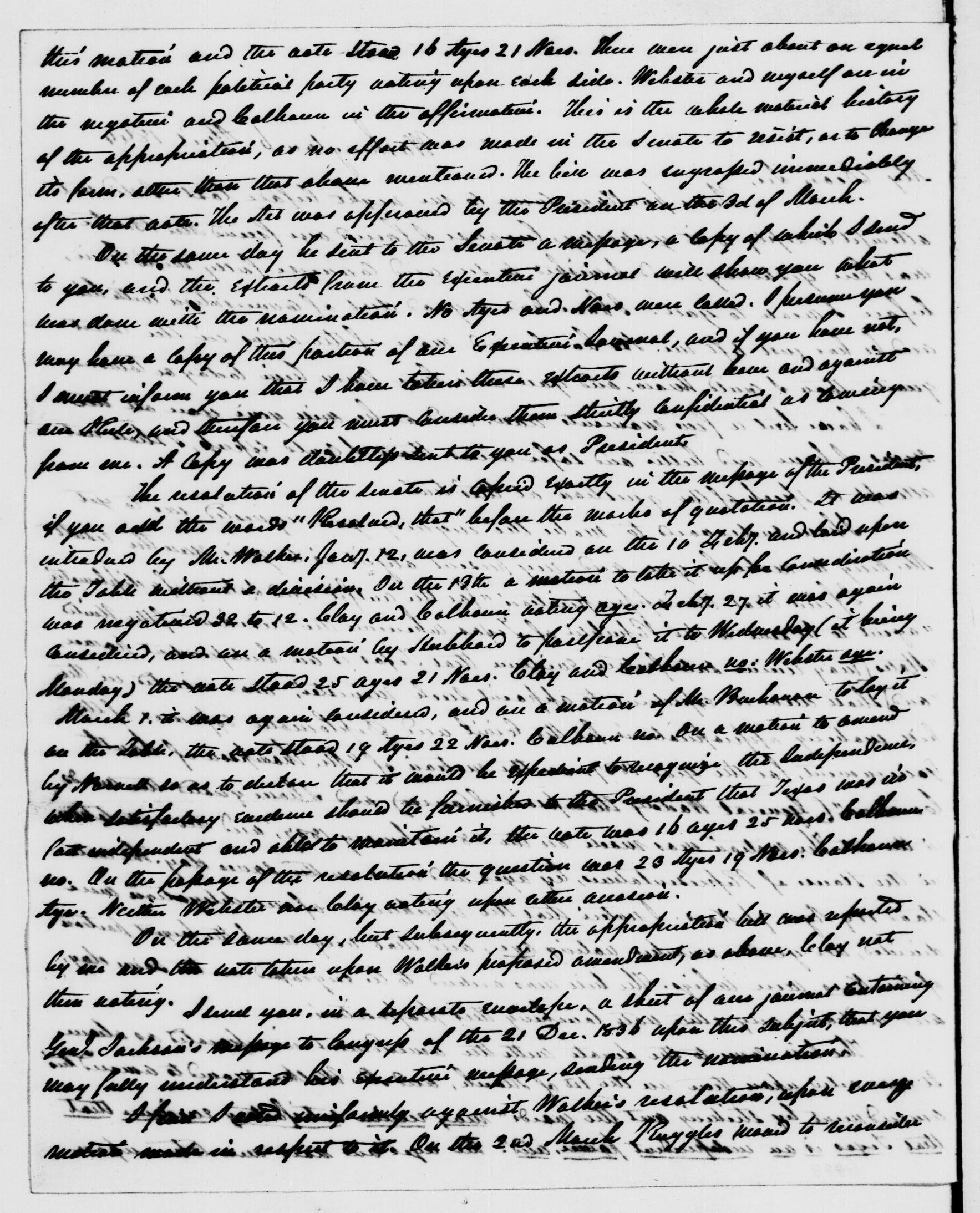 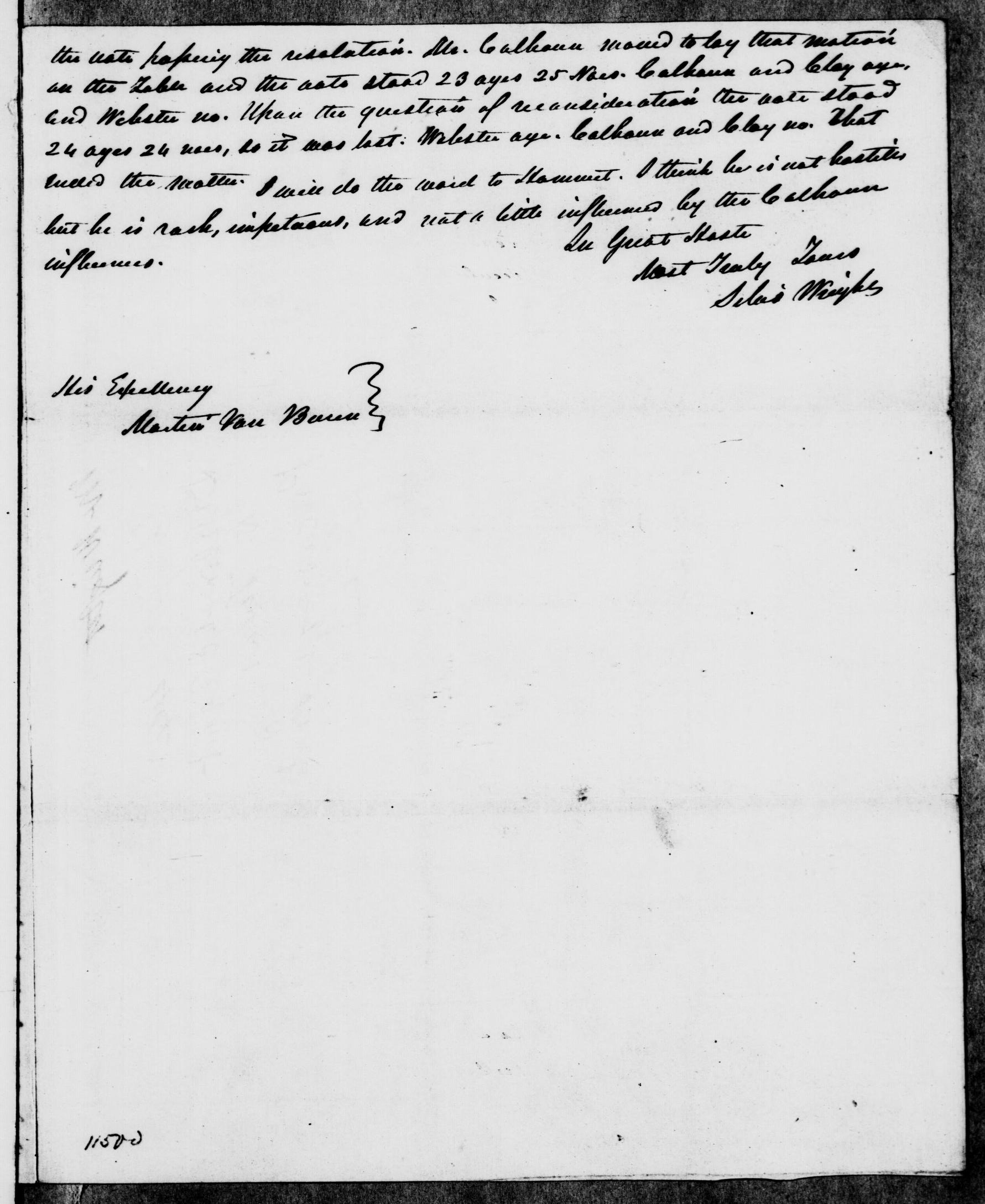 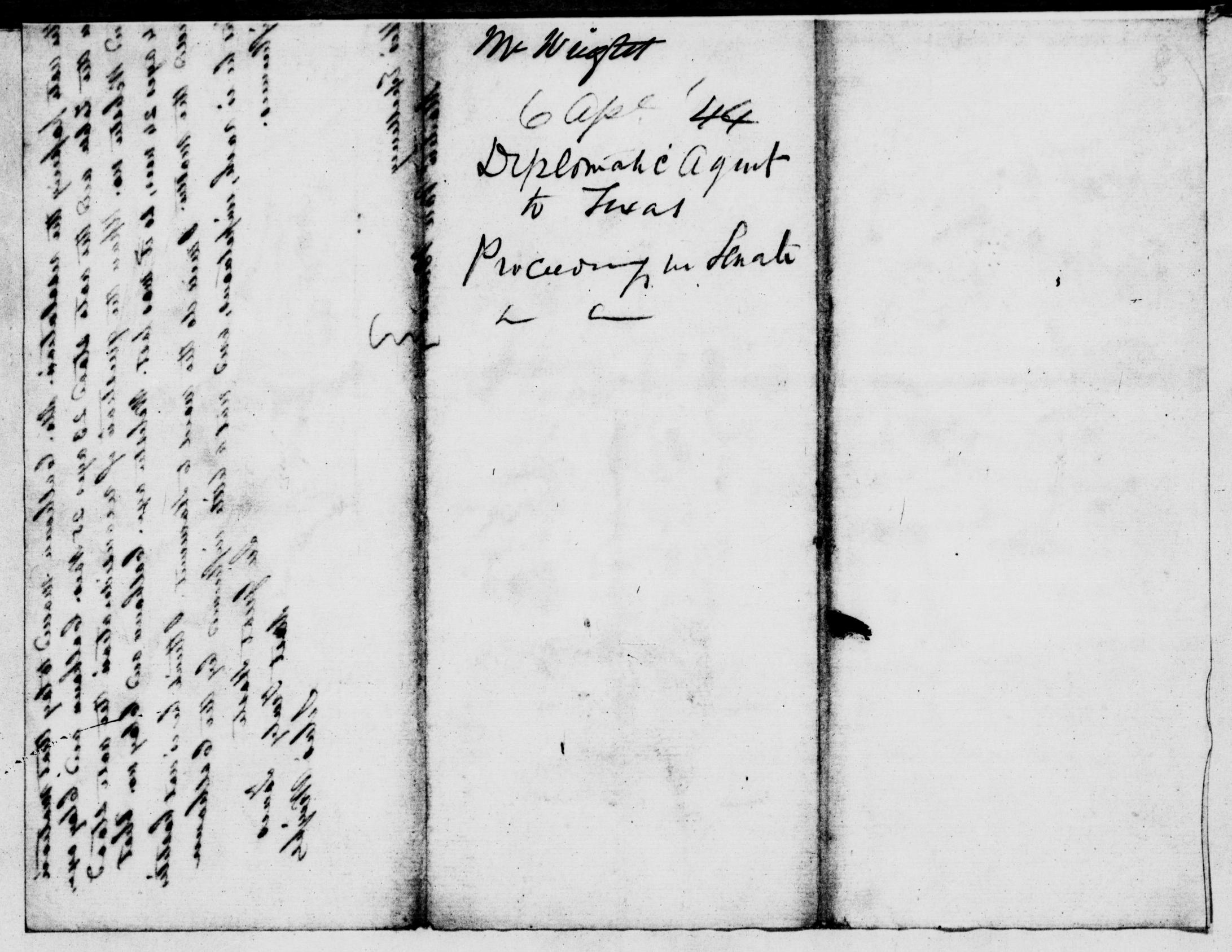