Major Donelson has returned in good health, gives us the pleasing intelligence of your good health & spirits, as well as all the rest of our friends in Washington.

Altho on my late visit to the lower country parties were not introduced on public occasion, still I learned much from our influencial friends and since my return have received many letters from the north and east, from all which I learn that the republican cause is gaining every where, and nothing can prevent a triumphant victory but a scism in our ranks on the subject of the most suitable character to run as vice president. On this much depends our success. A man ought to be chosen, that all the republicans in every state would cheerfully unite on, and if this is not done it will Jeopordise your election. It ought to be a man whose popularity would strengthen you, not one that would be a dead wait upon your popularity, and it gave me much pain to learn from Major Donelson that our friends in congress thought it best that the national convention at Baltimore should nominate no one for the vice presidency. Surely our friends have not taken a common sense view of the whole subject. Let us take a view of it. There are four republican candidates brought out by state conven^tions^ each urging the claims of their favorite but pledged to yield to the nominee of the Democratic national convention. If no ^national nomination^ each supports thier favorite, giving our enemies the weapon we used, against White & Harrison on the last canvassing, that each, was not supported by as many states as would elect them, therefore, useless to vote for them, thus paralising our exertions, keeping many from the poles that otherwise would attend where success was probable. This is not all, could a man of high honorable feelings & character continue a candidate under those circumstances, for one, I am sure, Col Polk would not. We are to have a hard Battle, and to ensure success there must be union, and to produce this the Baltimore convention must regardless of all personal attachments private feelings or selfish views, select a man upon whom the whole republicans, they whole ^democracy^ can rally; & will strengthen, not be a dead weight upon your popularity. The idea of not having a nomination for vice P. must have originated in the fear of having Col Johnson nominated, Who it is evident from the attitude of virginia & south carolina ^& other states^ cannot carry with him the republican strength. I esteem the Colo as a patriot, & soldier, and do know that if he is put in nomination he weakens our cause. However cheerfully I would vote for Colo. Johnson, if I did believe he could be elected by the people, under present circumstances when I do know several southern states ^that^ cannot be got to unite upon him under these circumstances I would not vote for him, or even ^for^ Major A.J. Donelson. The truth is that Col Polk has double the popularity that he has, for some cause, you cannot get the religious people to vote for him and his nomination in Ohio, was a mere accident, in committee he got one vote more than Polk, when latter can get at least 5000 more than he, and I have no doubts but the members from Ohio, When met in convention, viewing the whole ground, will vote for Polk. If this is doubted, I refer to Mr. Hamer, president of the ohio convention, & one of the members to the Baltimore ^convention^. The Whiggs here are urging the republican to take up Johnson instead of Polk; Why; because they know if Johnson is nominated they can carry Tennessee for the Whiggs. The Baltimore convention must nominate a man who can unite all our Force. It is a tremendous battle we have to fight, and surely no true patriot but what will adopt the true republican creed, "everything for the cause & nothing for men," and from the information I have from north to south with Polk the nominee, for vice president, every State but three, and a Strong probability of all but one ^for you^. There must be no maiden modesty on this subject. We require union & energy & with it all is safe. Without ^it^ yr election may be jeopordised. The vice president must bring some strength to, not weaken you, and Newyork regardless of every thing uniting with the Eastern states ^& southern & western^ has it in their power to nominate Polk. Ohio will go for him. With Polk, I verily believe we can carry Kentucky, and is it possible under these circumstances, that for partiality to men our great cause, the cause of freedom, & humanity can be put in Jeopordy and this by men who call themselves patriots, & republicans. I say it, cannot be.

I have wrote to Judge Grundy fully & hope that Hill ex Govr. of New Hampshire may be written to, and truly advised. I have wrote frankly to you. My whole feelings are engaged in our success, & if I can live to see it ^achieved^ I will die contented believing as I do, that the perpetuity of our glorious Union & happy republican system is ^then^ safe. Union and energy secures our victory. Without it we are beaten & our happy republican Government lost.

P.S. Give my kind regards to Mr. Vanderpool say to him I would have long since wrote him, but that I write with such dificulty for the want of vision. I write only when real necessity compells me; and then I make so many blunders of which I am ashamed. Give Mr Vanderpool my ideas confidentially upon this great & important national Battle. The more I reflect the more I am convinced that it is bad policy not to have a vice president nominated by the Baltimore national convention, and to nominate Col Johnson is putting in Jeopordy our cause. Either of the other three would better unite the Democracy but Polk would give aid, as well as unite the whole democracy. I speak frankly on this subject, having a high respect for all, and partiality for none. In this important struggle, I am for the cause and not for men. A.J.

Please write me on the receipt of this. 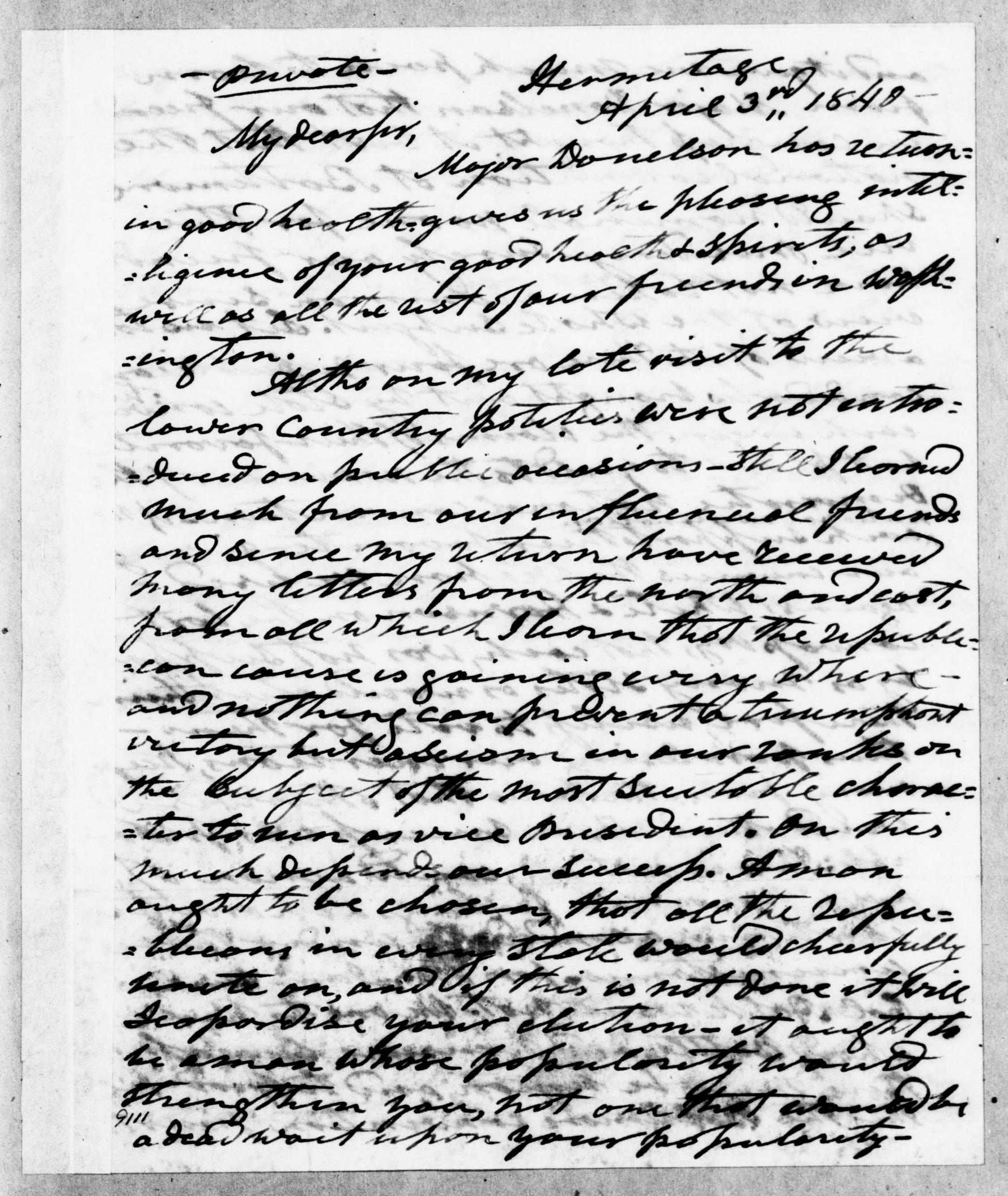 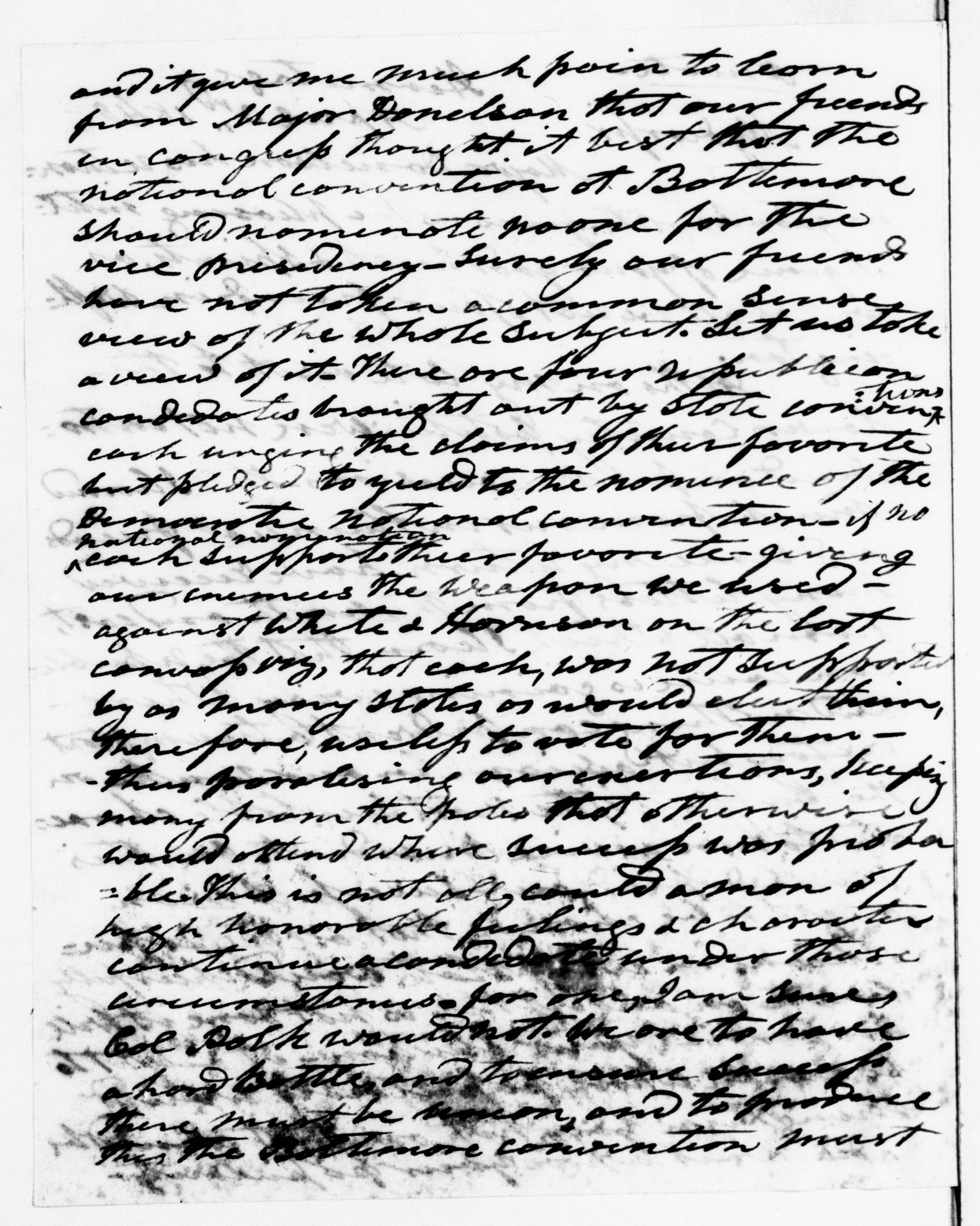 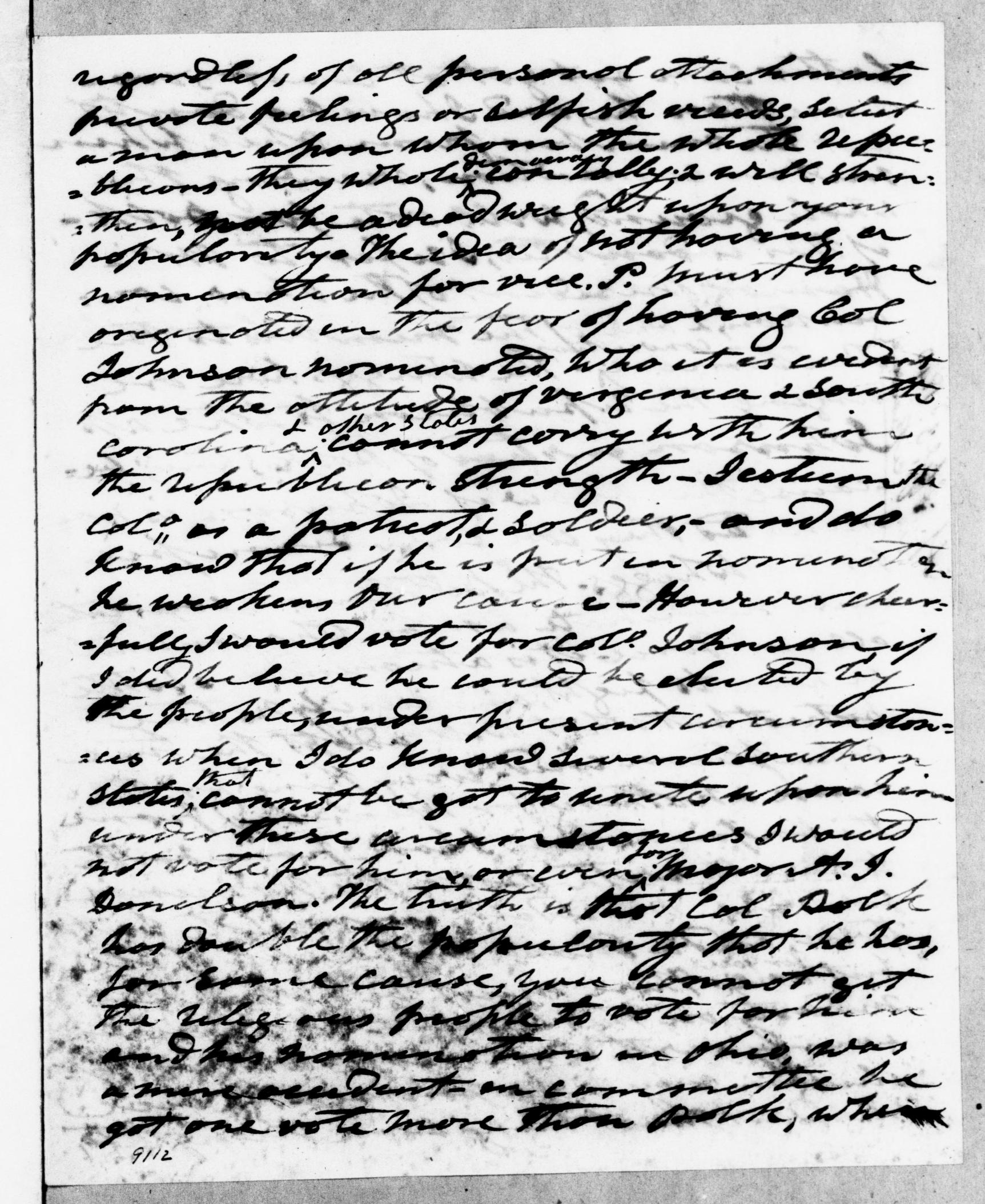 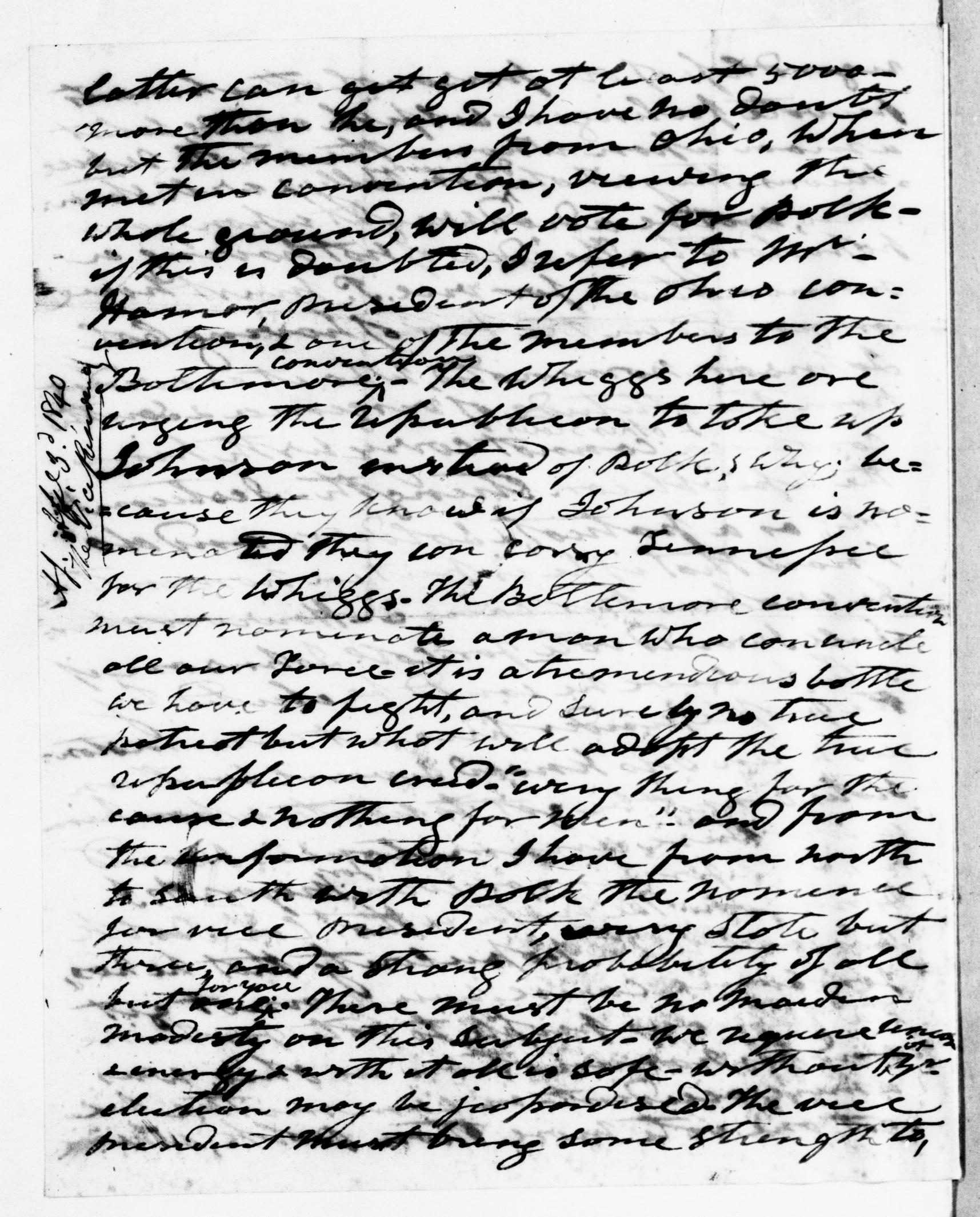 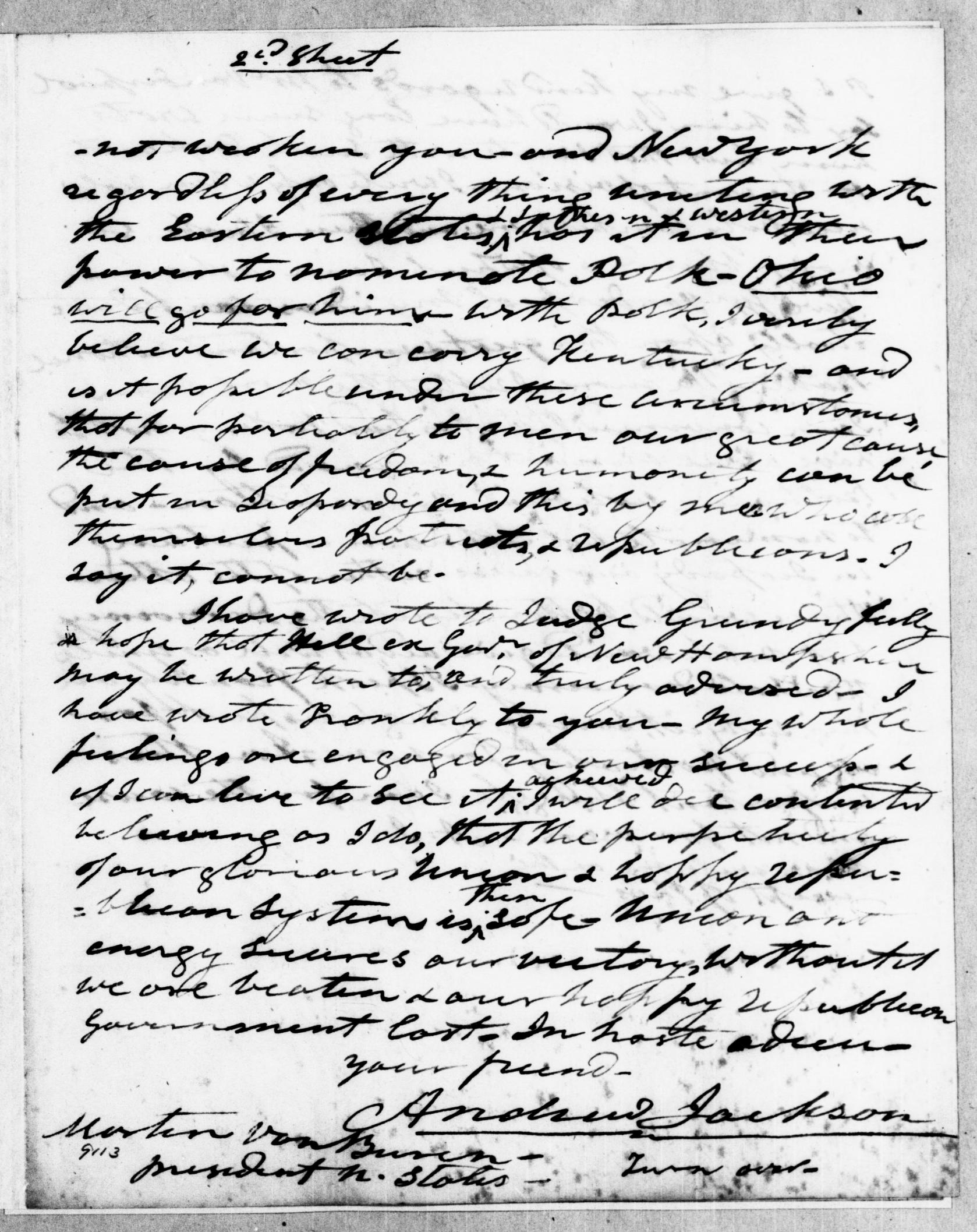 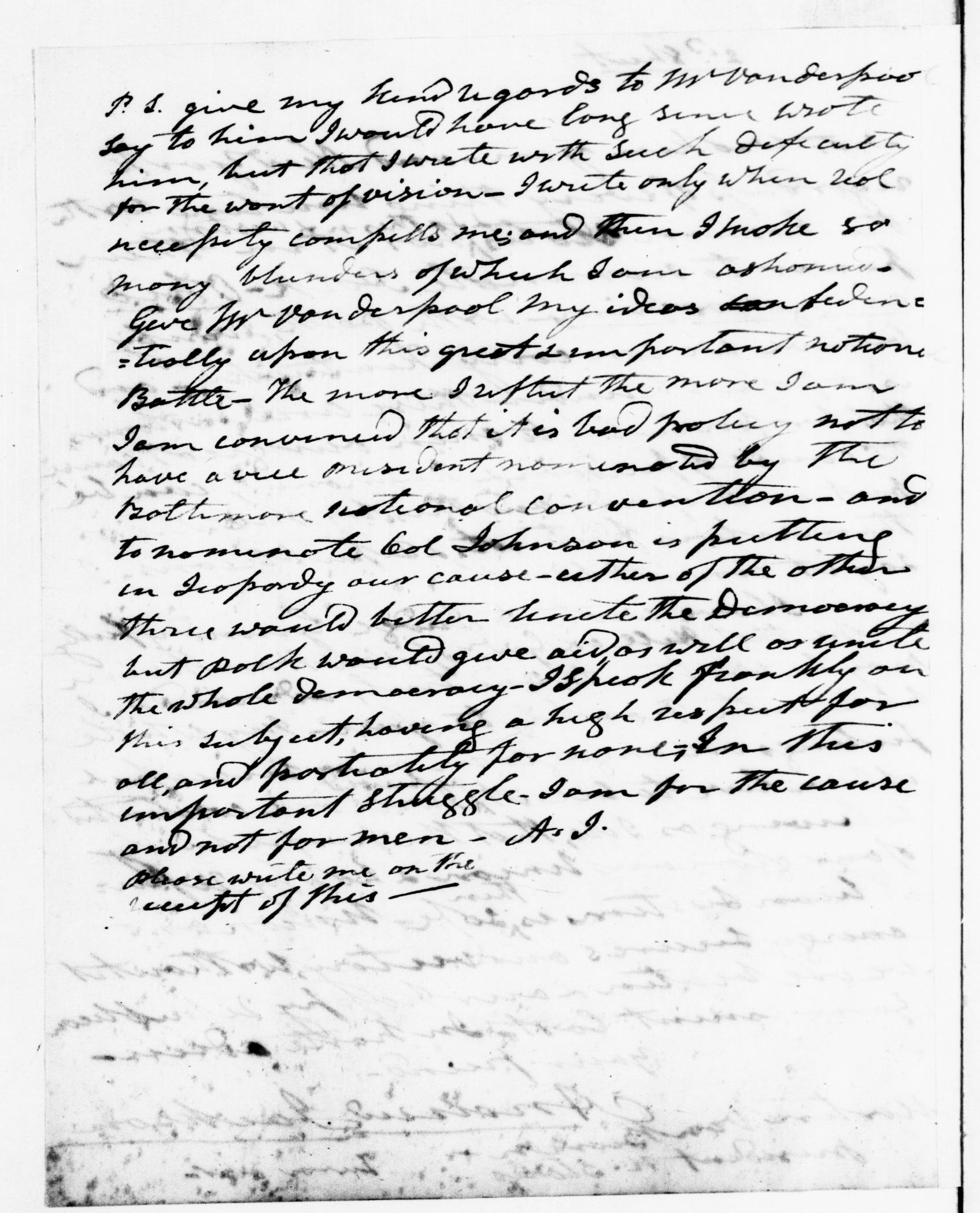 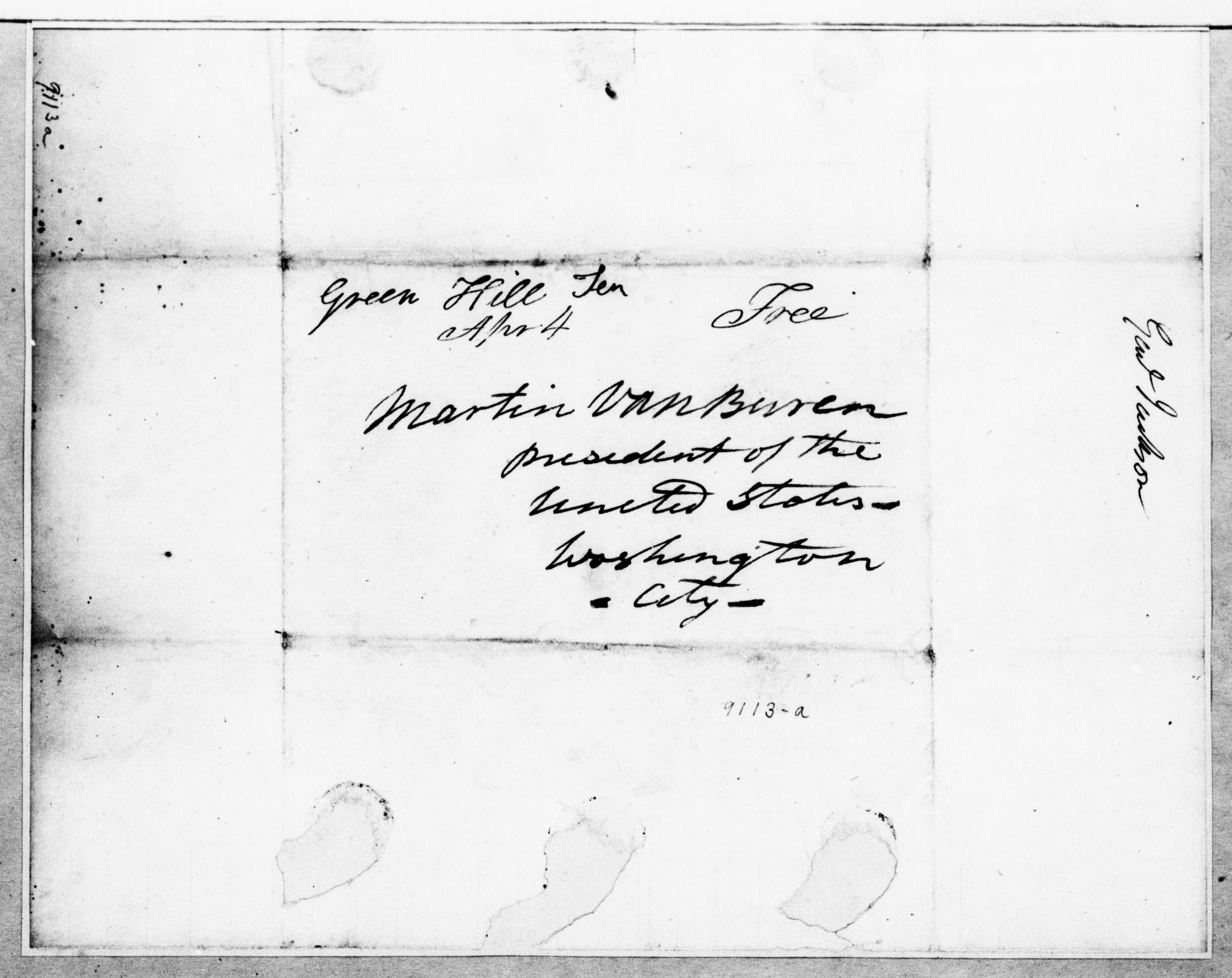