You are aware from former sometimes perhaps troublesome solicitude on my part for your popular welfare that I must have watched with much anxiety and witnessed with great gratification your progress, a constant ovation, it appears to have been, thro' Pennsylvania Jersey and Nyork. And as you told me that you are casehardened against flattery you will bear my adding, I trust, that if you are or ever were conscious of the very different state of public feeling two years ago only, you have every reason to be satisfied, as your political adherents have, they like me who have staked much, at my age all, of their venture on your personal success, when instead of being constrained to make every move and rely for every gain on the broad merits of your immensely popular predecessor, it has come to pass that your personal popularity is a sure and steadily growing reliance, substituted for if not superceding his. You are so strong in prudence, in which I am weak, and so much more clear and far sighted, that I am bound to believe your Castle Garden answer was no departure from the provident discretion which has become characteristic. Otherwise, audacious as I like to see statesmen occasionally, I must own that it strikes me as extensively bold. Such sentiments in that place bettered as it were without the usual official premeditation—certainly take the bull by the horns, not to express that idea in a still coarser phrase. But I dare say you know best. My object in writing however was less to turn to the past than the future: and as you have kindly authorized suggestions, I shall take the liberty of submitting some that have occurred to me, for the Message to next Congress. First, then, if alluding to your farewell communication to the NYork Legislature when going to assume the Department of State at Washington in which I well recollect there was a distinct intimation that you should look to revive the reduced rights of the States—something to that effect—you were to inform Congress that your journey thro' Maryland, Penna. Jersey & NYork <press> continually to view the unquestionable proofs that the greatest schemes of internal improvement can be and are much sooner and every way better carried into effect by the several states than by the federal govt. (constitutional right not taken into question) Secondly, and, alluding to Ld. Durham's report contrasting the English & American sides of the frontier you expatiate ​and warmly too on the much nobler glory, power and prosperity attainable by a free people improving themselves than by even the mightiest nations like Great britain relying on armies and distant colonies, as in Canada &c. Thirdly and, developing further the same view, demonstrating how the United States are struggling by the farming & planting inhabitants & succeeding tho' with difficulty to repair the continual evils which miscalled commerce, that is, speculation & paper money are inflicting on the City and even village population while navies and navigation laws and every sort of encouragment are bestowed on that class whose legitimate pursuits are indeed among our greatest means of national good. Fourthly and then, going still further in that same course of argument, recalling to the doctrines of your excellent letter to Sherrod Williams & take some pains by a sufficiently extended argument to prove, as may be done, that hard money is the only protection manufacturers need, the only one against which the planting states cannot raise an objection and if not the only one consistent with the constitution, at any rate the one most consistent with it. Lastly, and thus <come> to the constitutional Treasury as it seems to me, with unfeigned deference to your greatly better judgment, that the Message would contain information which Congress and the country should acknowledge the worth of, and Europe and hereafter would applaud

When you declined my invitation that you would honor me with a visit here, you were good enough to add that you would stop a moment with me if you were coming this way And as I suppose you will take Philadelphia on your return to Washington I shall be very happy if you eat a meal or spend a night with us. My travelling companion on the pilgrimage to Mr. Madison's, Mr. Smith V.B. has half promised me a visit, and of course it cannot but be agreeable to me to recieve you or any of your sons at my farm. With my neighbours Mr. Rush and Joseph Bonaparte besides plenty of others in the farming interest I think we spend much pleasanter summers, may I say to you without offence, than the watering place vagabonds, and if you will come and see you may have reason to wonder why I should desiderate a seat in Congress, or failing that, as you must not forget I told you; perhaps some other less quick and still more distant responsibility, while home affords all I ought to wish. I am busy preparing for the contested seat and I shall make such a case irresistable by any fair judges

To close this long letter complainingly—here is my son arrived at Philadelphia with his seventy seamen under his command in the little rotten schooner Enterprise and his commander Commodore Ballard with his seven or nine hundred on board that noble ship the North Carolina which you visited, waiting for the pay of their <illegible>, thus dissaffected, disorganized, provoked to disobedience, driven to ruinous habits. Why is it so? Whose fault is it? Cannot the Secretaries of the Navy and the Treasury prevent such improprieties, of too frequent recurrence, as I understand. If I were a Member of Congress I would certainly, if not denounce, at least try to remedy such improvidence, which costs ten times the money due to these poor mariners & is discreditable as well as detrimental to the country May I hope that you will not suffer it again. It would redound to the credit of an administration of govt. which you know I am nervously anxious to uphold

I understand that the City authorities of Philadelphia were ready to have welcomed you had your progress been this way—as no doubt they will be whenever you come—and I take for granted that you will officially look at the Encampment near Trenton, where I should be glad to meet you and be among your conductors to these parts. 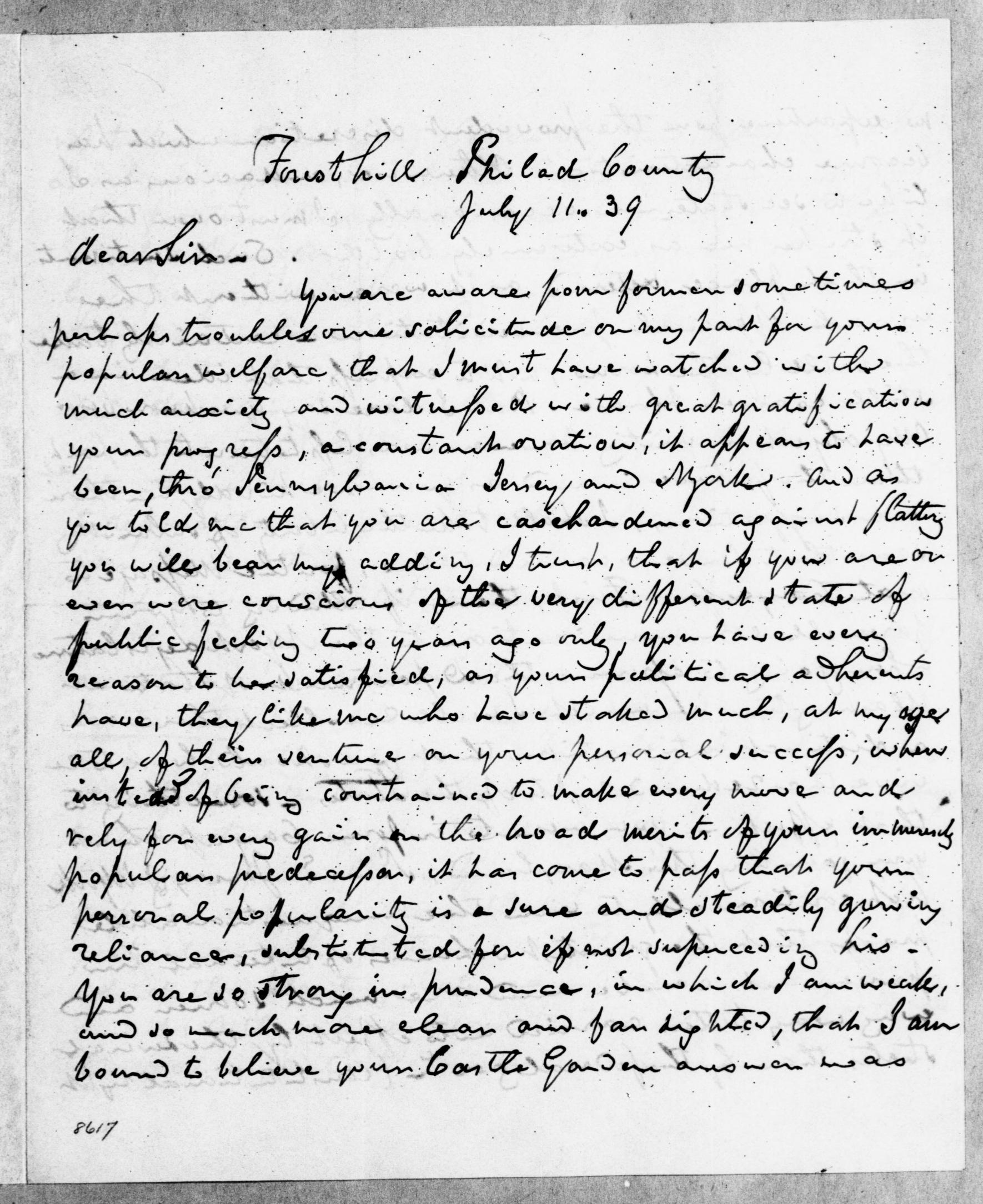 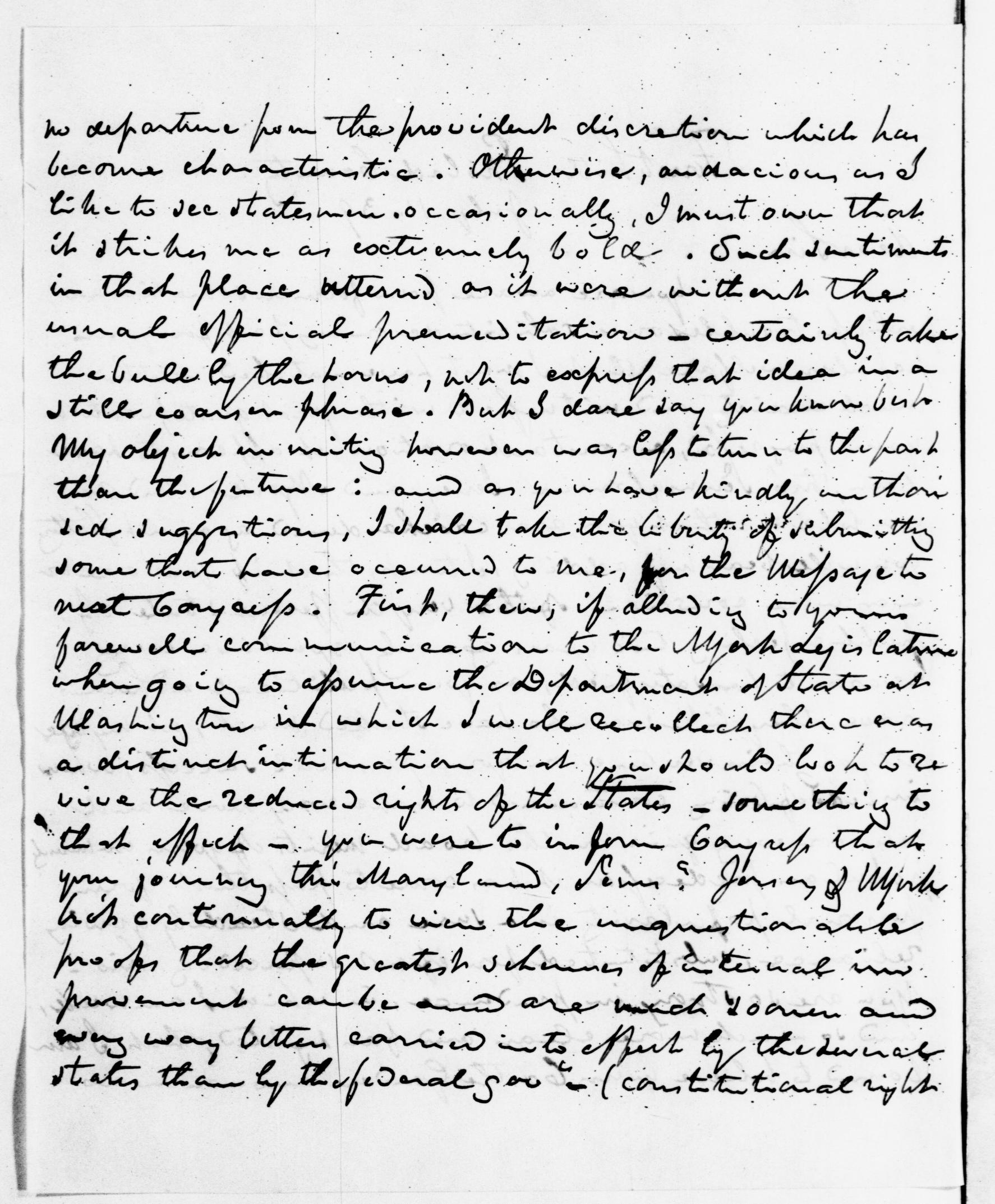 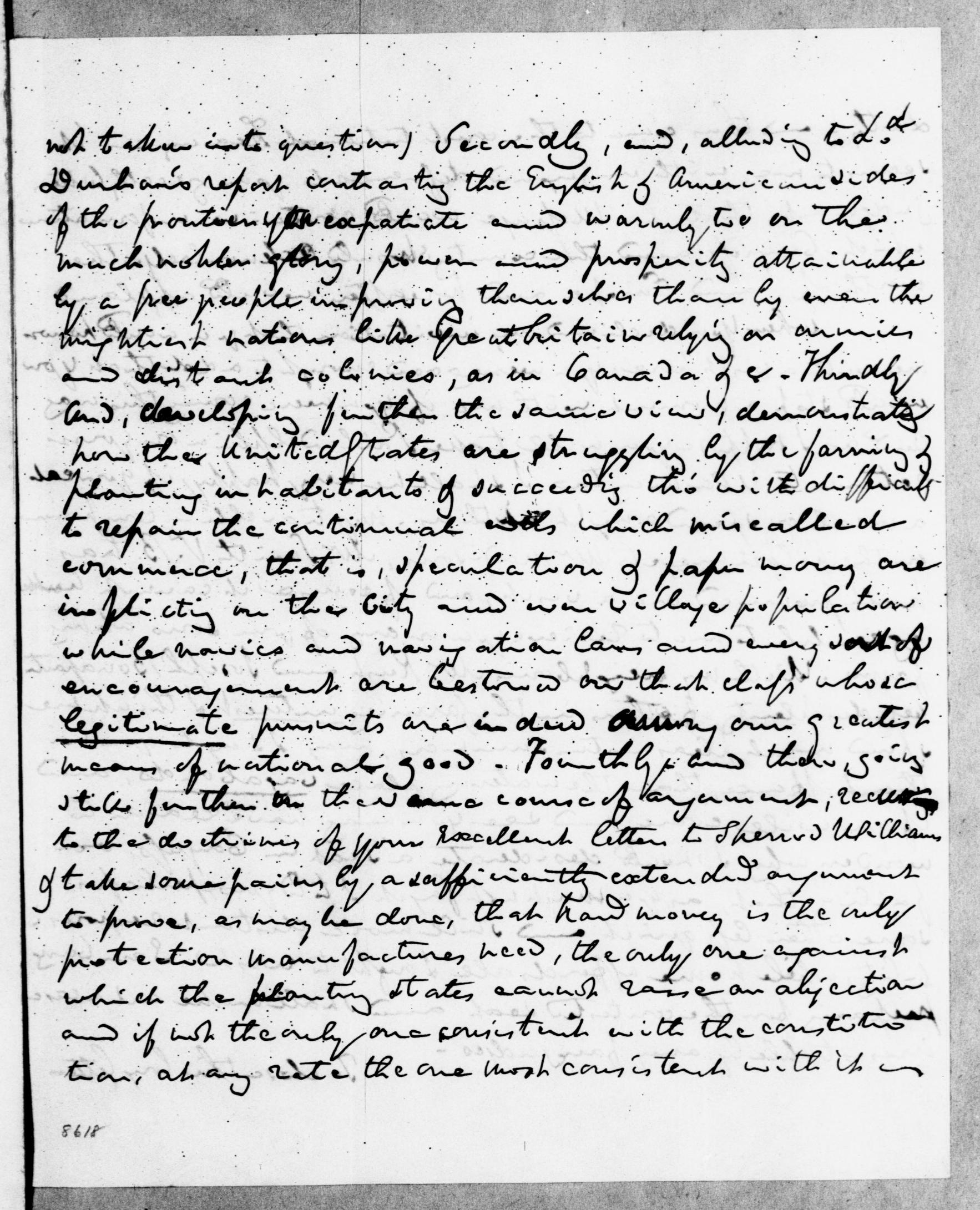 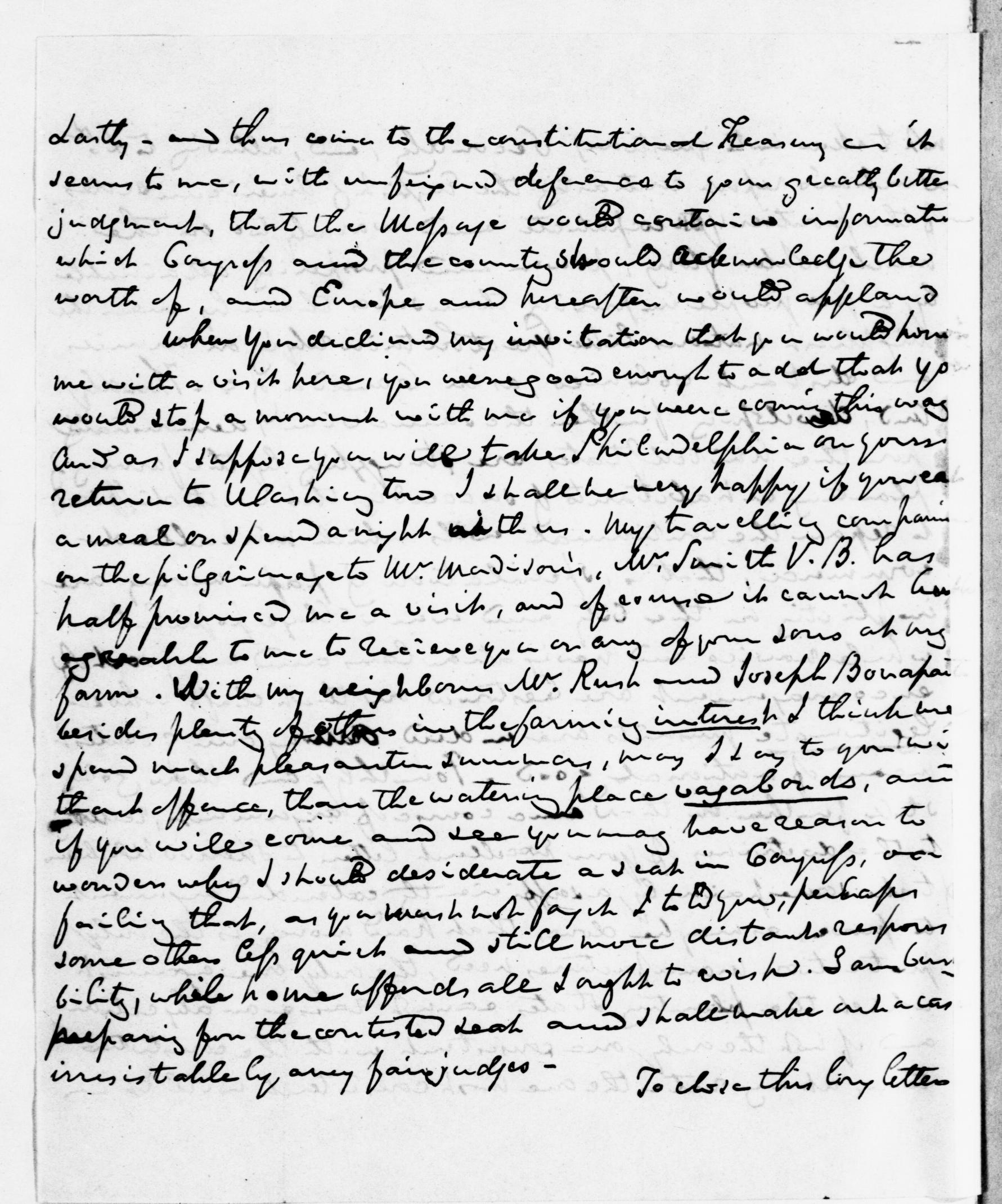 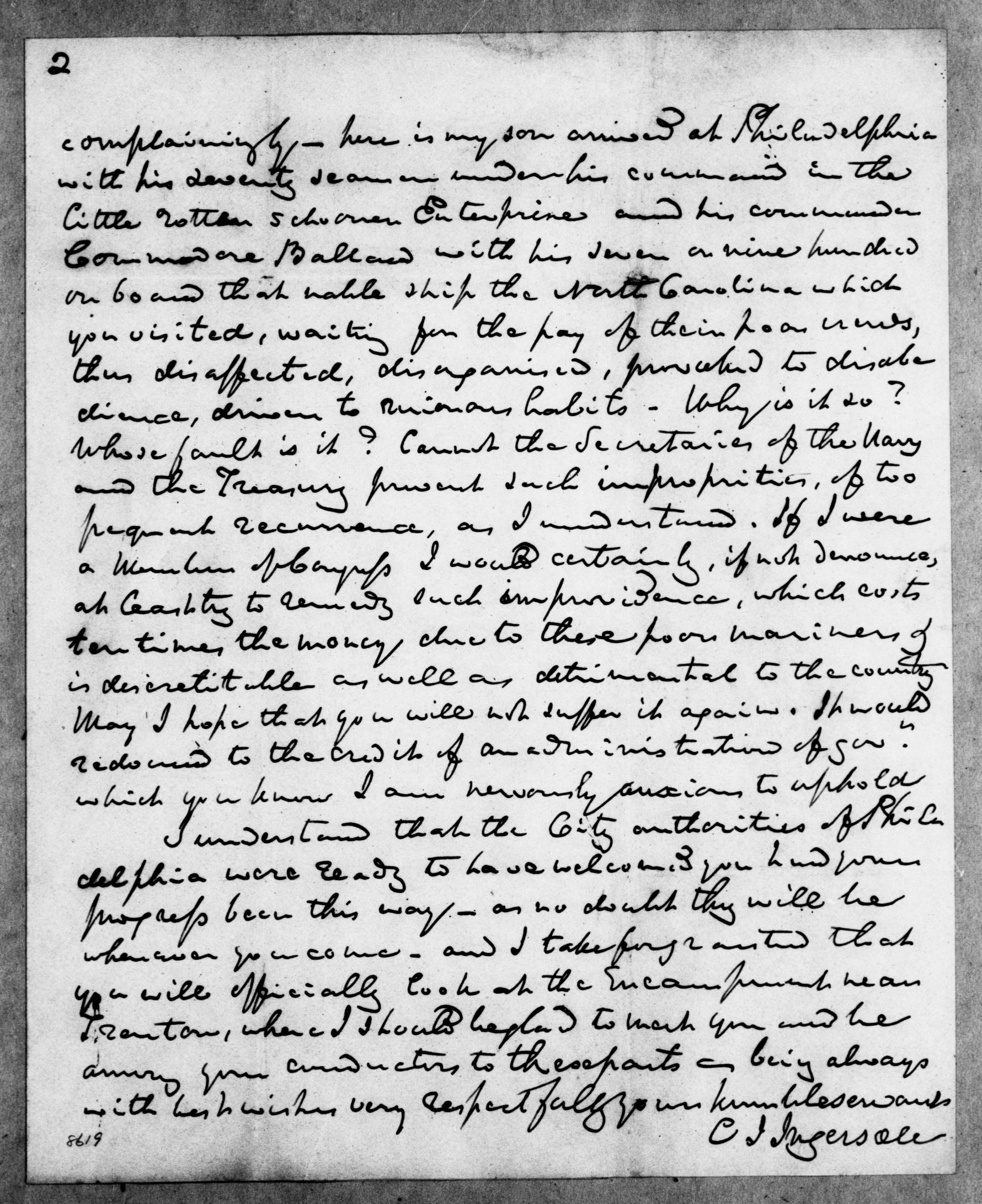 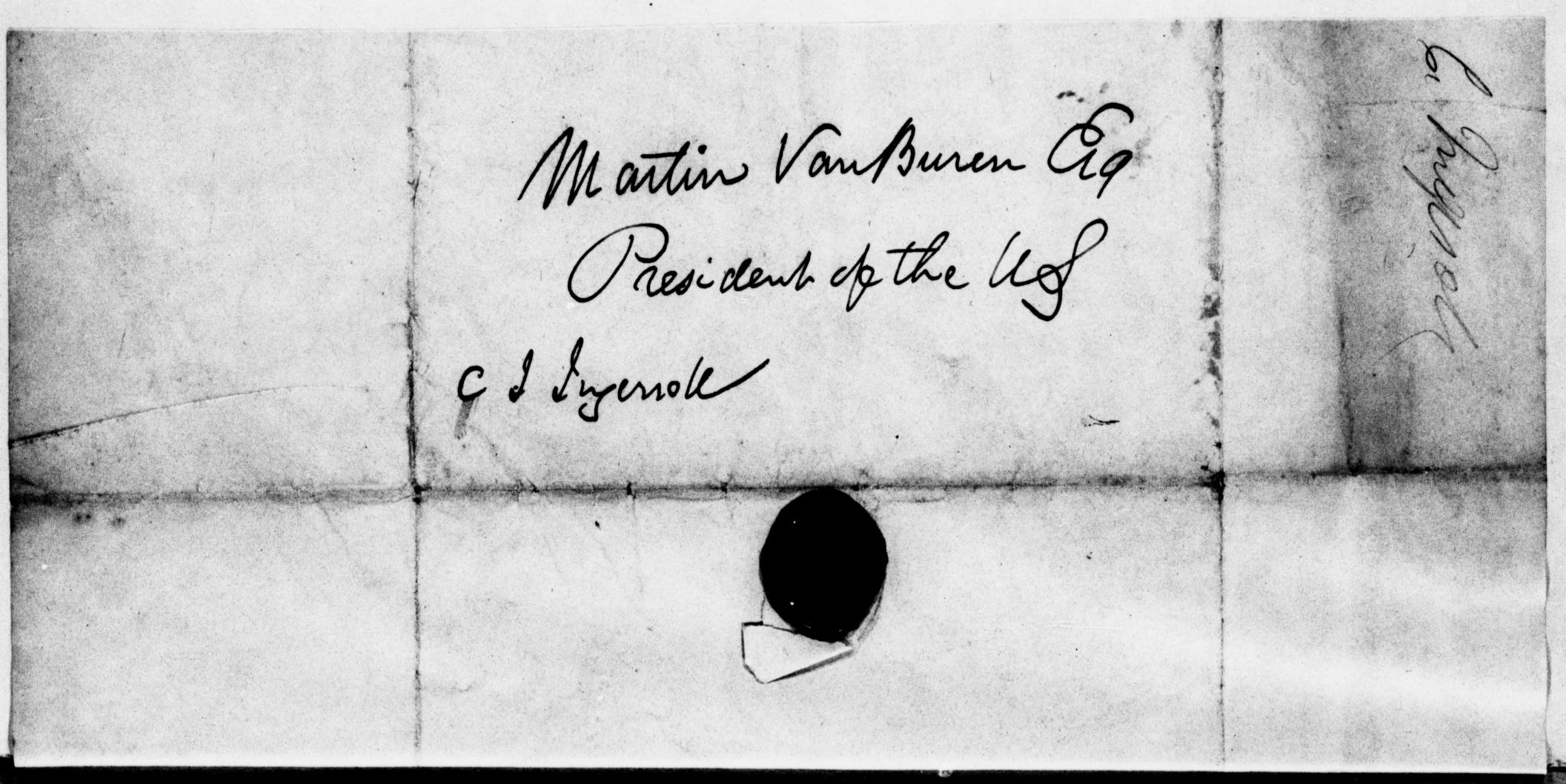