I congratulate you most cordially on the noble triumph which has just been achieved by the firm & incorruptible Democracy of your state. New-york must henceforth assume the title of the “unterrified commonwealth”, which Virginia once won from the enemies of our country, & which it was formerly her pride & boast to wear. I trust she may yet regain it, & share it’s honors with those of our Sister-States, who have stood so firmly by the Constitution & the rights of the People in the hour of trial. Give my thanks, I pray you, to my young friend, S.T.V., for his handsome & spirited communication of the intelligence. There is a fine tone in his letter, which shews him to be already imbued with the true faith. Offer my congratulations also to Mr. John, on his eloquent & “spirit-stirring” Resolutions, & the glorious result of the struggle, which he welcomed with so enthusiastic & chivalrous a confidence in the goodness of his cause. This signal Democratic victory has been a great damper to the Whigs, in this quarter. Whatever they may say now to the contrary, they built strong hopes on the city of New-york, especially. As Mr. Leigh, whose tirade against you at the Petersburg dinner you have, doubtless, seen, professes great reverence for the anglo-saxon trial by jury, he must feel this verdict of the vicinage, (unless perchance there should have been some magic in it), to be a strong decision against him.

Since the receipt of your letter of 23rd ult., my time has been so much occupied by the company of friends here, that I have had no opportunity hitherto of giving you my thoughts on the treatment of the French question. I think with you that a strong statement of the delinquency of France, in her delay, to comply with a solemn inter-national engagement consecrated by the highest obligations of justice, good-faith & true policy, is not only called for in the President’s message by the wrongs we have sustained, but will be expedient, in reference to the effect to be produced on the public councils of France. But the recommendation to congress of so strong a measure as a provisional act authorizing the collection of the amount due, by reprisals, if the French chambers should fail, at their approaching session, to provide for it’s payment, (which, I infer from a letter I have recently received from Major Donelson, is spoken of at Washington), would, in my opinion, be not only impediment, but going farther than the present state of the case warrants. The King, in his opening speech to the Chambers at their late pro forma meeting, gave notice that a law would be presented, providing for the execution of the Treaty. ’Till an opportunity has been afforded him of redeeming this solemn pledge made in the face of the world, & of seeing how it will be acted on by the Chambers, it seems to me the President cannot, consistently with comity & propriety, recommend a measure appealing, (tho’ contingently), to force. From my observation of the French character, I am convinced that such a recommendation would be felt by the boasted chivalry & sensitive pride of the nation as an insult to the national honor, & would be laid hold of as a justification for a final & total refusal to execute the Treaty, & must, in it’s issue, therefore, lead to an open rupture between the two governments. I think that the President by the manner of stating our complaints against France, shewing that we felt, & could not be expected longer to acquiesce in, her evasions, without some measure to vindicate & sustain the rights of the nation, could make a more imposing appeal to the French councils, than ^by^ any specific measure he could recommend, short of which would not directly compromit the peaceful relations of the two countries. I should be, therefore, for as strong a statement as possible of our just causes of complaint, which should not transcend the bounds, or violate the forms, of inter-national courtesy, & after a manly exposure of the nature & grounds of these complaints, ^would^ call on congress, as the guardians of the national interests & honor, to determine, in their wisdom, what measures the exigency demanded. The advantage of this course would be that while the President would not be committed to any specific measure, leaving the responsibility of any Legislative act where the constitution has placed it—with Congress—the spirit & tone of his message would be more imposing in their effect on the French councils, than any practical measure he could recommend short of force, in some form or other.

If the President, however, should feel himself called on to recommend some specific measure to congress, I am decidedly of opinion that some commercial measure affecting the interests of her national industry, particularly of it’s great staple, the silk manufacture, would be both more suitable to the present state of the controversy & lead more certainly to a satisfactory & amicable termination of it. My views, on this subject, were given to you very fully in a letter I addressed to you in May last. Subsequent reflection, & developments, I must say, have confirmed me in them. A lofty chivalry, I know, rather revolts at the idea of asserting the rights of the nation thro’ the custom-house. But all inter-national questions are, at last, matters of calculation, & it will be admitted by all, I presume, that if we can compel France to do us justice without going to war, it is better to do so. There is a peculiarity in the French character, which should never be lost sight of in our transactions with her government. There is no people, under the sun, more alive to, or more easily influenced by what touches their pecuniary interests than the French, & yet none whose pride of chivalry, & notions of national honor, would rise in stronger defiance to any appeal to their fears. This consideration gives a great preference, in my estimation, to commercial measures over any measure of force, as the means of bringing the French government to justice. If you will read the Debates which took place in the Chamber of Deputies on the occasion of the rejection of the appropriation for carrying the Treaty ^into effect,^ as I hope you will, it being, no doubt, preserved in the State Dep[artmen]t, you will find that the discussion ^turned^ mainly on the question whether, in the event of rejection, the U.S. were likely to take measures to further or exclude their silks. All admitted the over-ruling importance of this consideration; but it was contended by the opponents of the appropriation that we would not, & therefore, they voted against the Bill. The course of reasoning, on that occasion, is the strongest testimony that can be conceived to the efficacy of the measure ^policy^ of commercial restriction.

If the President thought proper to recommend such a measure to congress, for the present & as a preliminary step only, awaiting the further deliberations of the French chambers, he might do it in a way to which they could take no just exception, on the score of menace, & which would, nevertheless, be keenly & instantaneously felt thro' the most sensitive organ of the national industry. Shortly after the treaty, & no doubt in consideration of the prospect of general amicable relations ^between the two countries^ which that event opened, the duties on French silks, together with the European silks, were reduced progressively from 20 per cent down to nothing, while India silks are still kept up at a duty of 10 per cent. Might not the President, with great propriety, adverting to the history of this measure & treating it as a liberal measure towards France influenced by the expectation of improved amicable relations with her, suggest to congress that, as our expectations of an amicable & friendly policy on her part had been hitherto unfortunately disappointed, it would be proper to withdraw this liberal advance on our part, & to restore the duty on French silks to 20 per cent, leaving India silks at their present lower rate of 10 per cent. Such a measure some would, in my opinion, soon quicken the Chambers to a sense of justice, or if it did not, Lyons would extort it for us. I have had time to give you my ideas in a general way only, some of which have been anticipated, indeed, in a letter I addressed a few days ago to Major Donelson. If you should approve them, you will readily follow them in their consequences & develop them in the manner & details of their application. 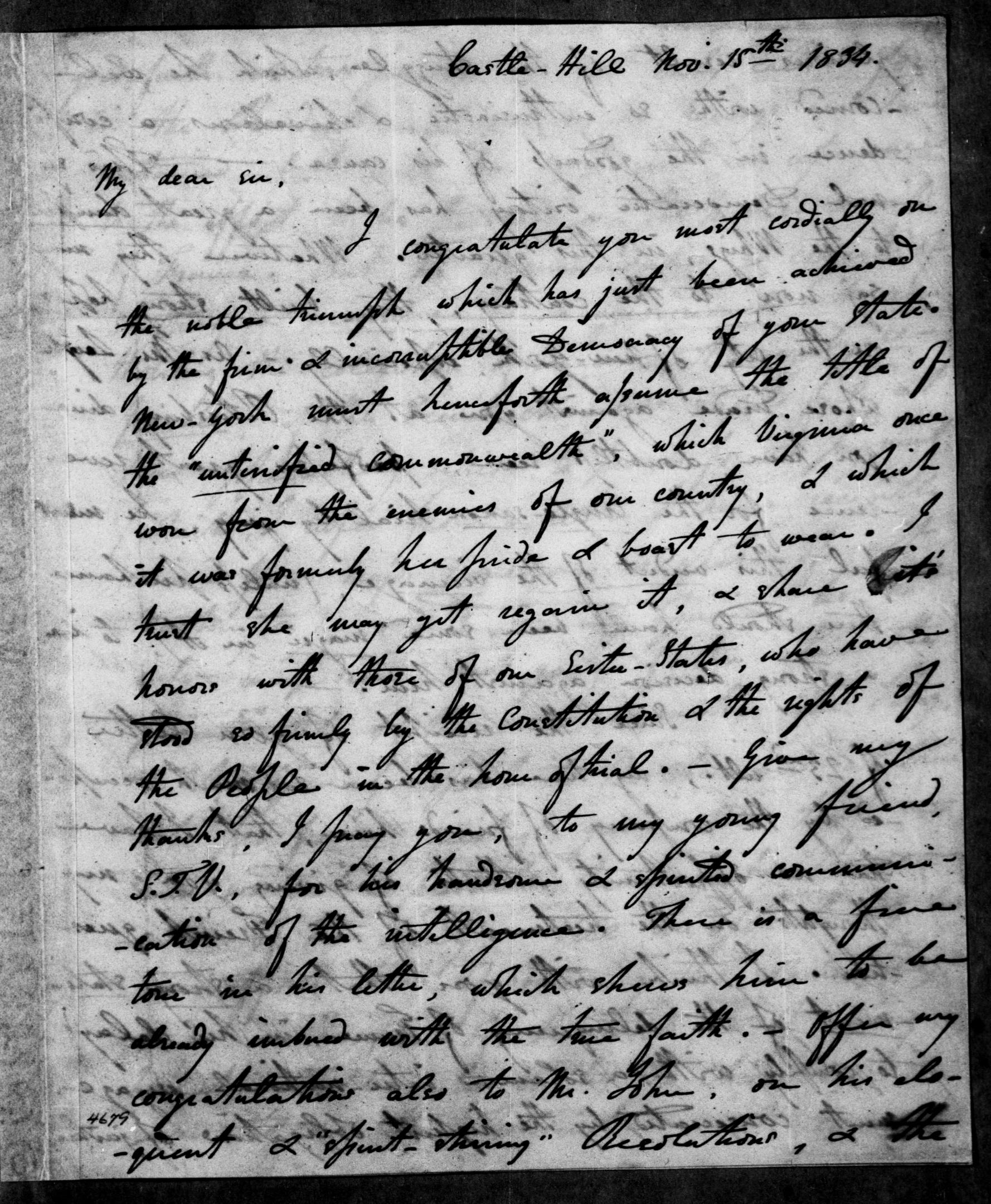 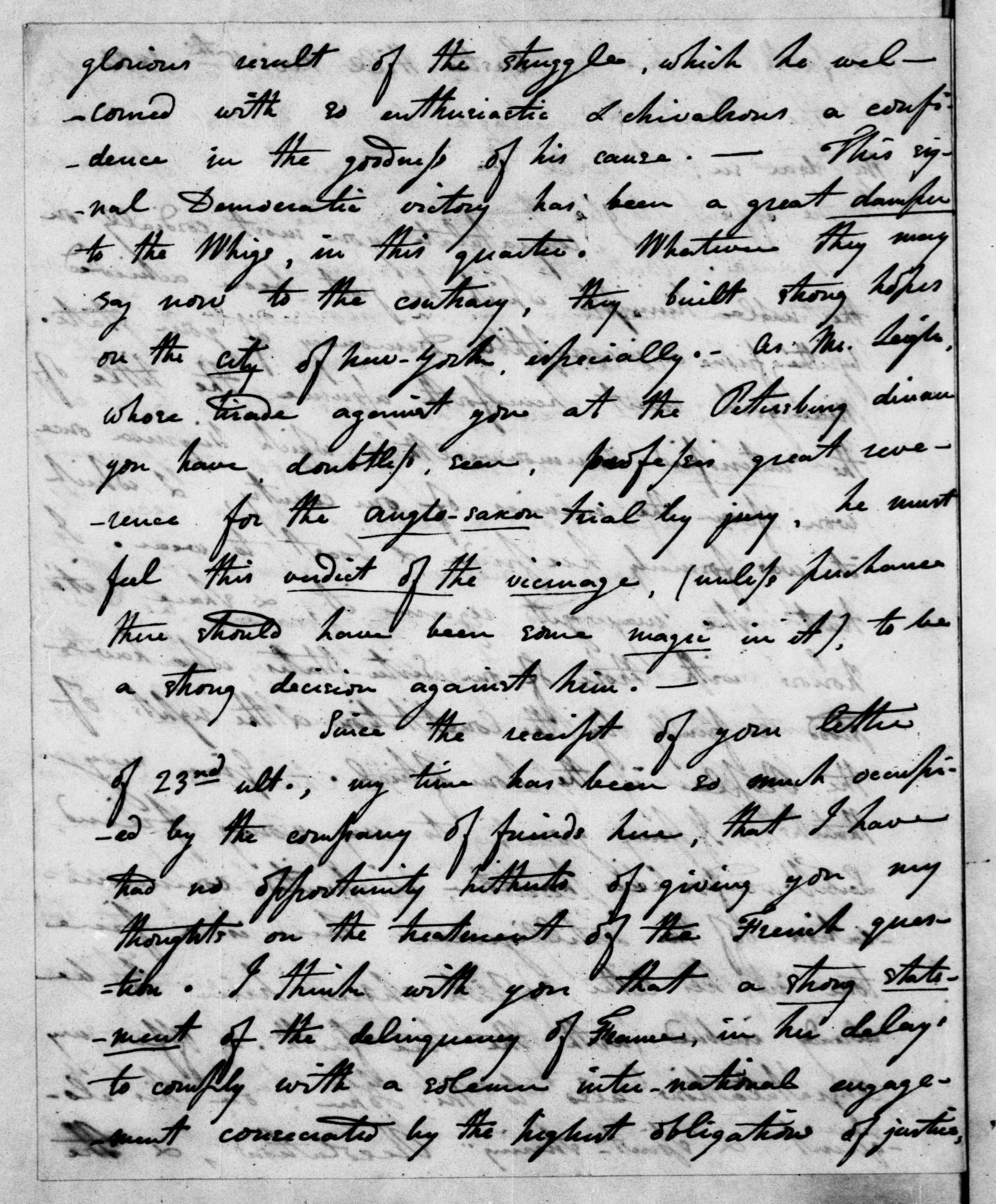 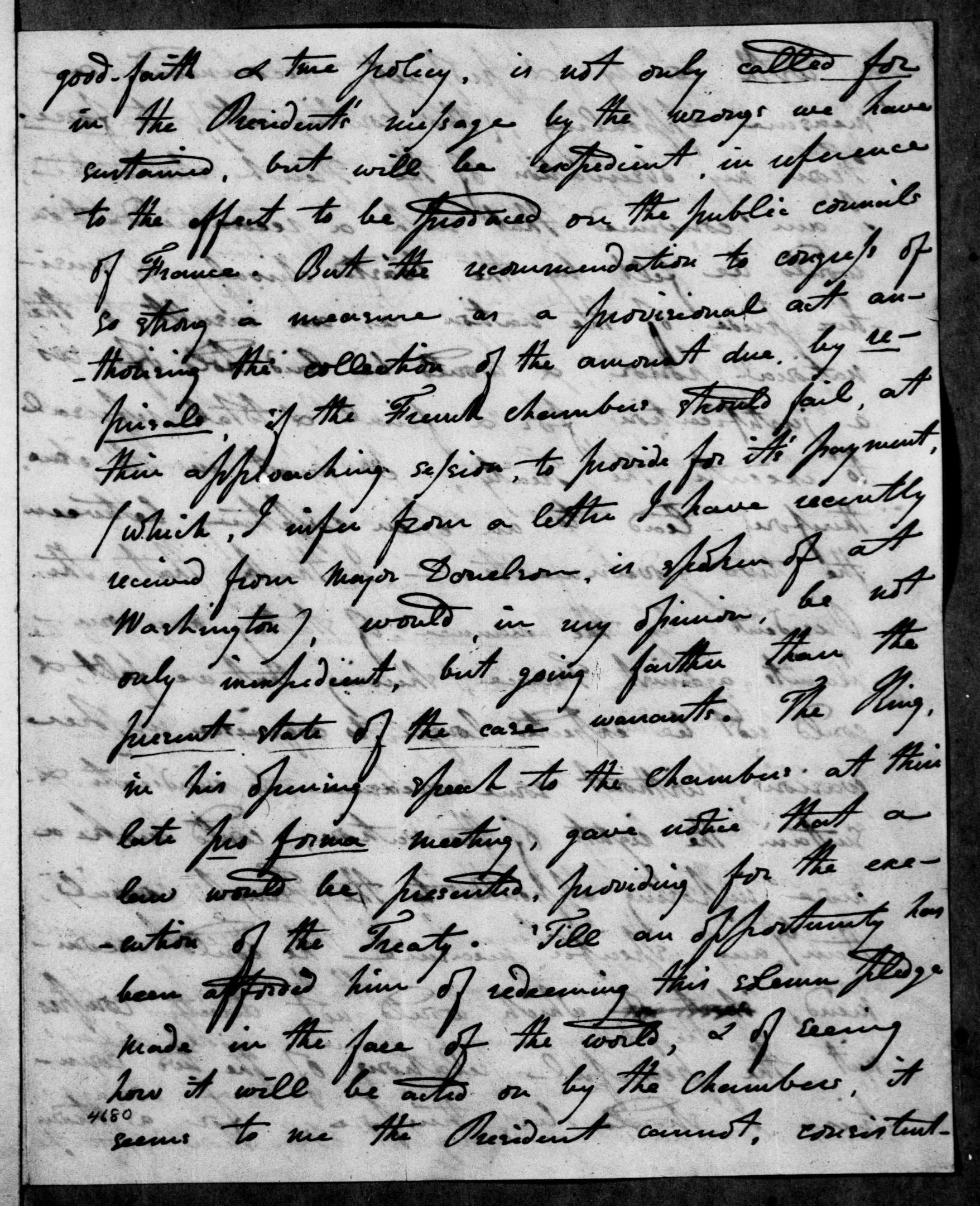 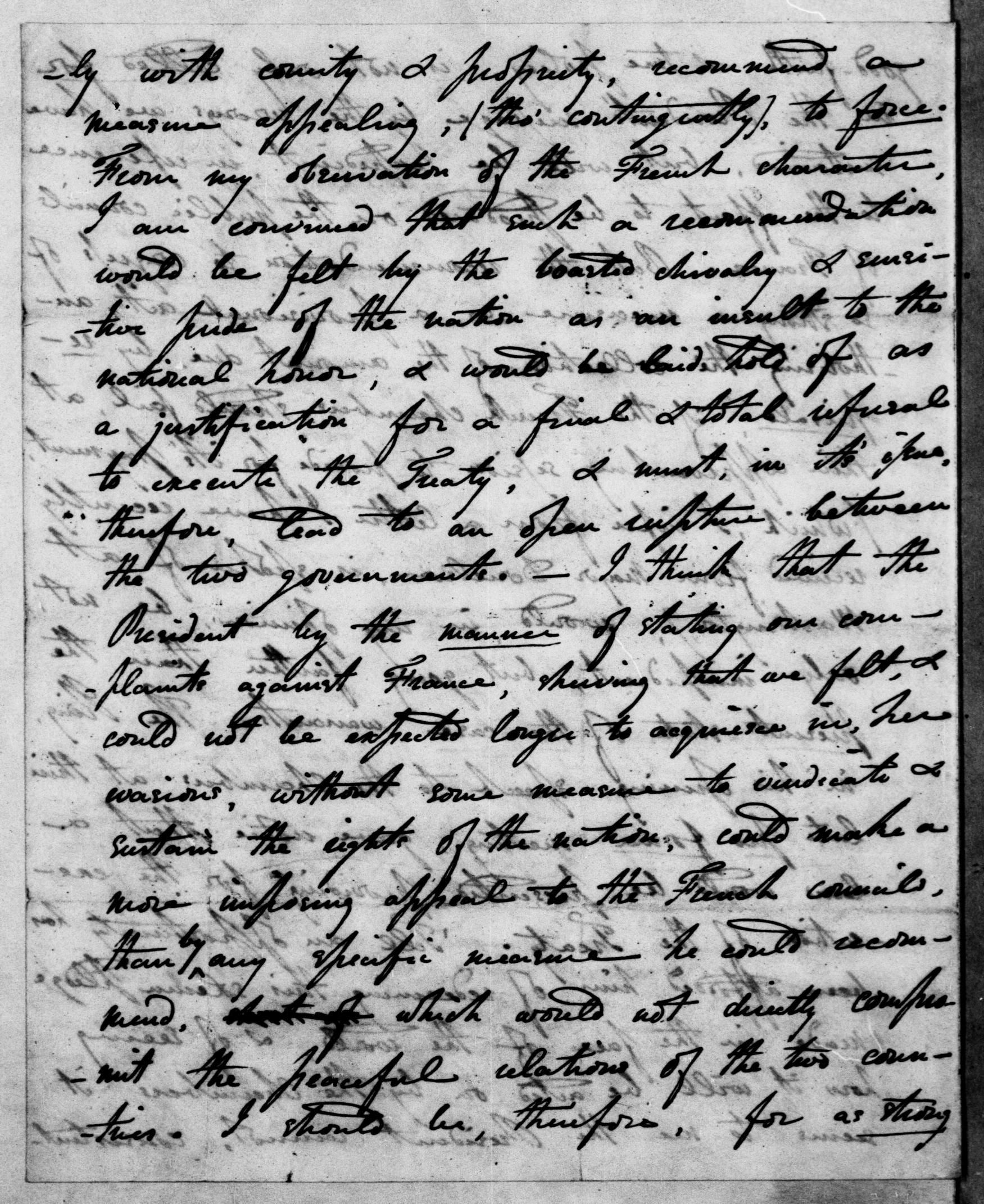 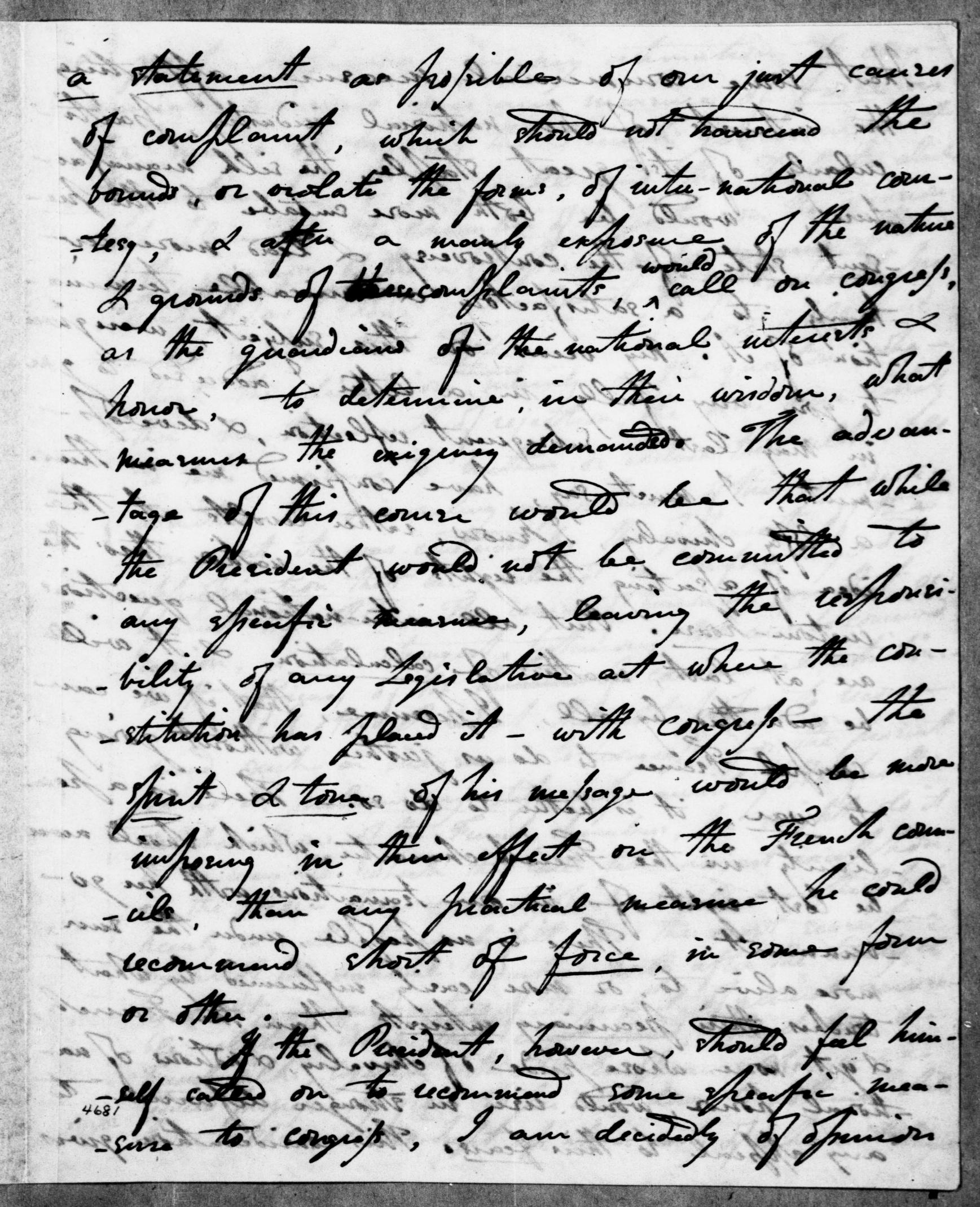 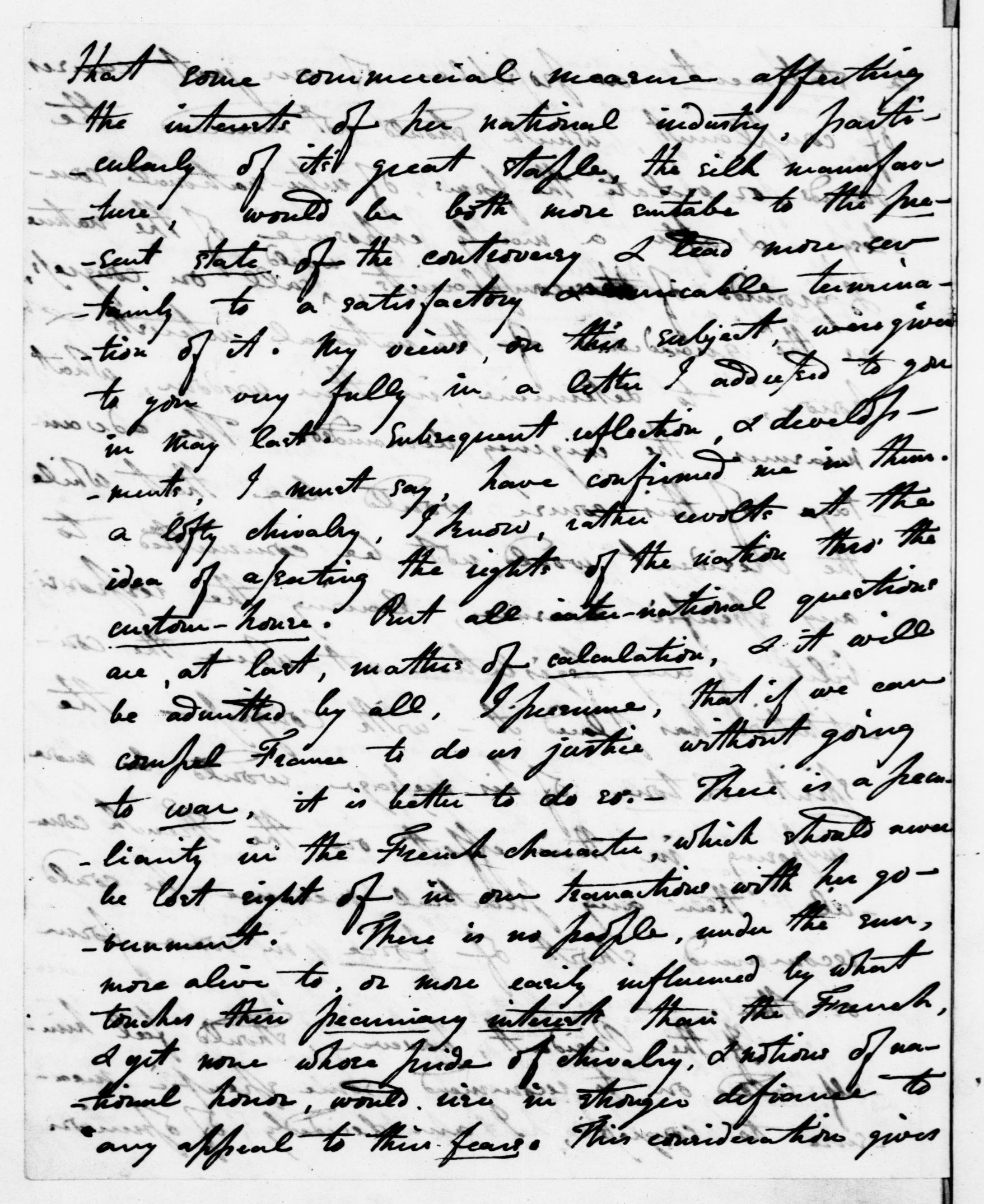 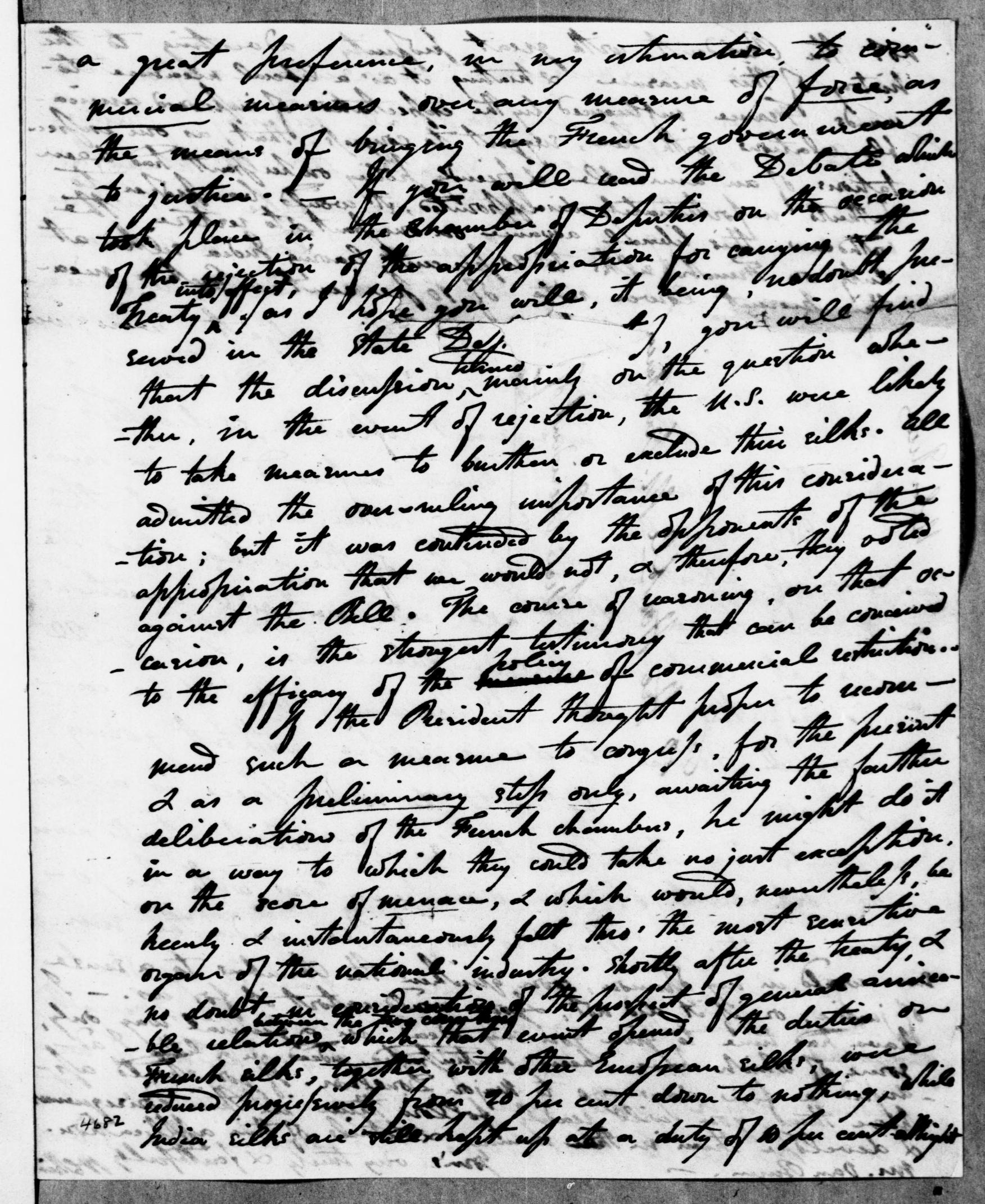 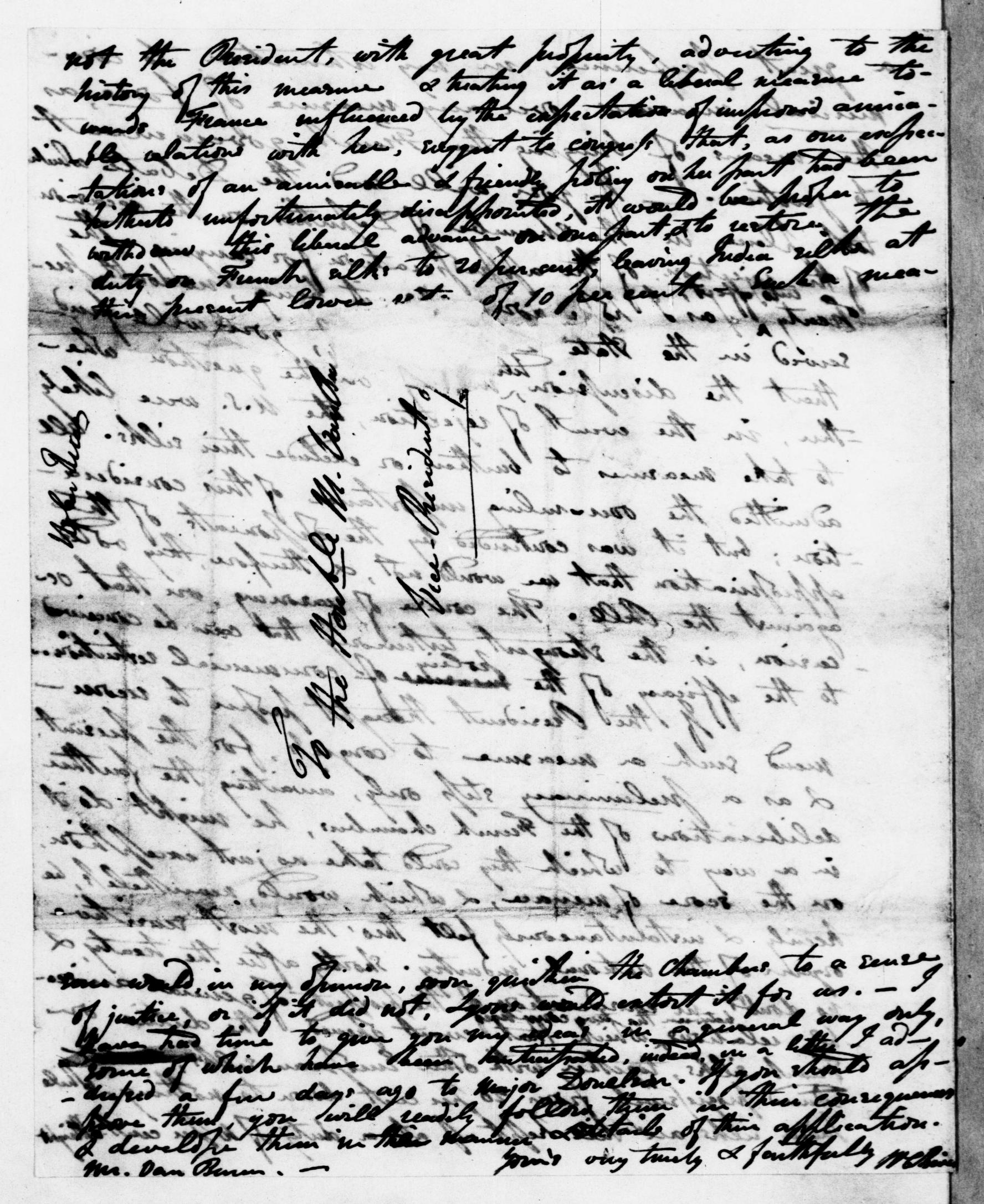