I have been wishing & intending, for a long time, to write to you; but having, for the last two or three months, been almost constantly changing place, I have hardly been stationary or retired long enough to do so. We have, at length, gotten home & are now quietly settling down into winter quarters; & I dedicate with pleasure, the “first fruits” of my leisure to giving you the news of the “Old Dominion.” We have been in great hurly-burly, all the summer. The belligerent scenes at the Metropolis between Daniel & Pleasants, Ritchie & Archer, have passed into the domain of public history, & I need not, therefore, occupy you with their details. While the capital was the theatre of “wars & rumours of wars,” the country has not been an idle spectator of events. The people have been actively employed in bringing their representatives into conformity with their own views by formal Instructions; & I think now there is but little doubt that our adversaries will be compelled, with whatsoever wry faces, to drink deeply of the “chalice,” which they first held to our lips. They are already heartily sick of Instructions, & in their desperation, are almost guilty of the daring political profanity of contending that no Instructions are worthy of notice, but such as they can get up under the Federal investigation of Richmond, in the Halls, of the Legislature. But their lordly affectation will not do; & in the day of trial, the instinct of self preservation will prevail, & the Representatives, however reluctantly, will bow at last with submission, to the will of the people, from whom they hold the “breath of their nostrils”. Our friends are now in fine spirits throughout the State, & calculate with confidence that Instructions will be carried in a sufficient number of the counties, to secure the election of an administration candidate to the Senate, next winter. Even our friend, Ritchie, now obeys his own signal of “heads up!”, & has raised his crest again. He has just sent me a message in a letter from his son, (who is a fine young fellow, by the bye), that "he & his friends in Richmond are in good spirits about the result—that he is ^in^ great hopes that, by the medium of Instructions, the next Legislature may send a “Democratic Senator to Washington.” &c &c.

Now, my dear sir, in this state of our prospects, brought about with infinite difficulty & labour, great solicitude is felt in regard to the President’s Message, which, with a people so sensitively constituted as we of Virginia are, may materially affect them. Much anxiety is felt that the President should not by any bold or questionable proposition, furnish a new handle to his & our enemies. In regard to the Bank, it is hoped that no further measure will be taken or recommended by him, it being considered now as effectually hors de combat. It will be unavoidable for him, I presume, to mention, in the terms suitable to it, the late unjustifiable conduct of the Bank in the confiscation of a portion of the public revenue. But will it not be better, without any suggestion or recommendation of his own, to leave it entirely to the wisdom of congress to determine if any thing, & what, shall be done. The President, I have supposed from his conversation, thinks a Legislative repeal of the charter, for this & other misdeeds of the Bank, would be entirely justifiable, & I have sometimes apprehended that he might, in his noble fearlessness of responsibility, recommend it to congress. But, as the charter will so soon expire by its own limitations, would not so bold a proposition expose him to a powerful re-action of public sentiment? In Virginia, at least, where ideas of the sanctity & intangibility of Legislative grants & charters otherwise than by judicial process are deeply rooted, it would throw him all aback. It is hoped, also, that the President will not indulge the generosity of his nature by identifying himself unnecessarily with the transaction of the Post office Department, to which his friendly feelings for Maj. Barry & his just indignation at the gross misrepresentations of the majority of the P.O. committee might strongly impel him. I think his feelings are already much enlisted on that subject. Our relations with France <illegible> [. . .] very delicate topic. The President, when he was here on his way to Washington, was under the impression that the chambers would make an appropriation during their late brief session, & I see that much complaint has been indulged in the newspapers that it was not done. But this was never to have been expected. The chambers did not meet for the despatch of business, but simply in compliance with the 42nd act of the charter, which declares that “in case of dissolution of the chamber of Deputies, the King shall convoke a new one within the period of three months.” This matter, therefore, stands ^now,^ so far as the chambers are concerned, precisely where it did before this assembling. I fear, however, that it is going on badly. Some of my friends in France write me that there is a party in the Chamber of Deputies, under the lead of Dupin the Speaker, constantly preaching up economy, that Mr. Livingston is in very bad health & bad spirits, that he has been very little in France of late, having been travelling in Belgium, England, & elsewhere for the benefit of his health, & that he was not in Paris during the late session of the Chambers, even. While this subject, ^therefore,^ certainly requires the vigilant & energetic attention of the government, I do not see, (so far as my limited information furnishes me materials for making up an opinion) ^that there is^ any more necessity for the interposition of congress now, than there was ^the^ last session. Of all these matters, however, you are a far better judge than I am. I have taken the liberty to bring them to your notice, because I know that, it your views should happen to concur with mine, no one can place them more advantageously before the President than yourself; & because I feel that the issue of our Senatorial election here, & have reason to believe that the results of the fifteen other Senatorial elections now pending elsewhere, involving as they do the harmonious & successful operations of the government, will depend mainly on the prudence, moderation & wisdom, as well as dignified firmness, of the President’s message.

I hope you have passed your summer agreeably, & that you have seen no reason to change your opinion of the prospects of a glorious Democratic triumph in New York. I had the pleasure of meeting with the Major at our Springs, but could not prevail on him to protract his absence from Washington long enough to make us a visit here, where we were very anxious to have seen him. Mrs. Rives sends her best respects, & bids me say to you that you may expect from her soon an answer to your kind letter of last July, which various engagements & impediments have heretofore prevented her from acknowledging. 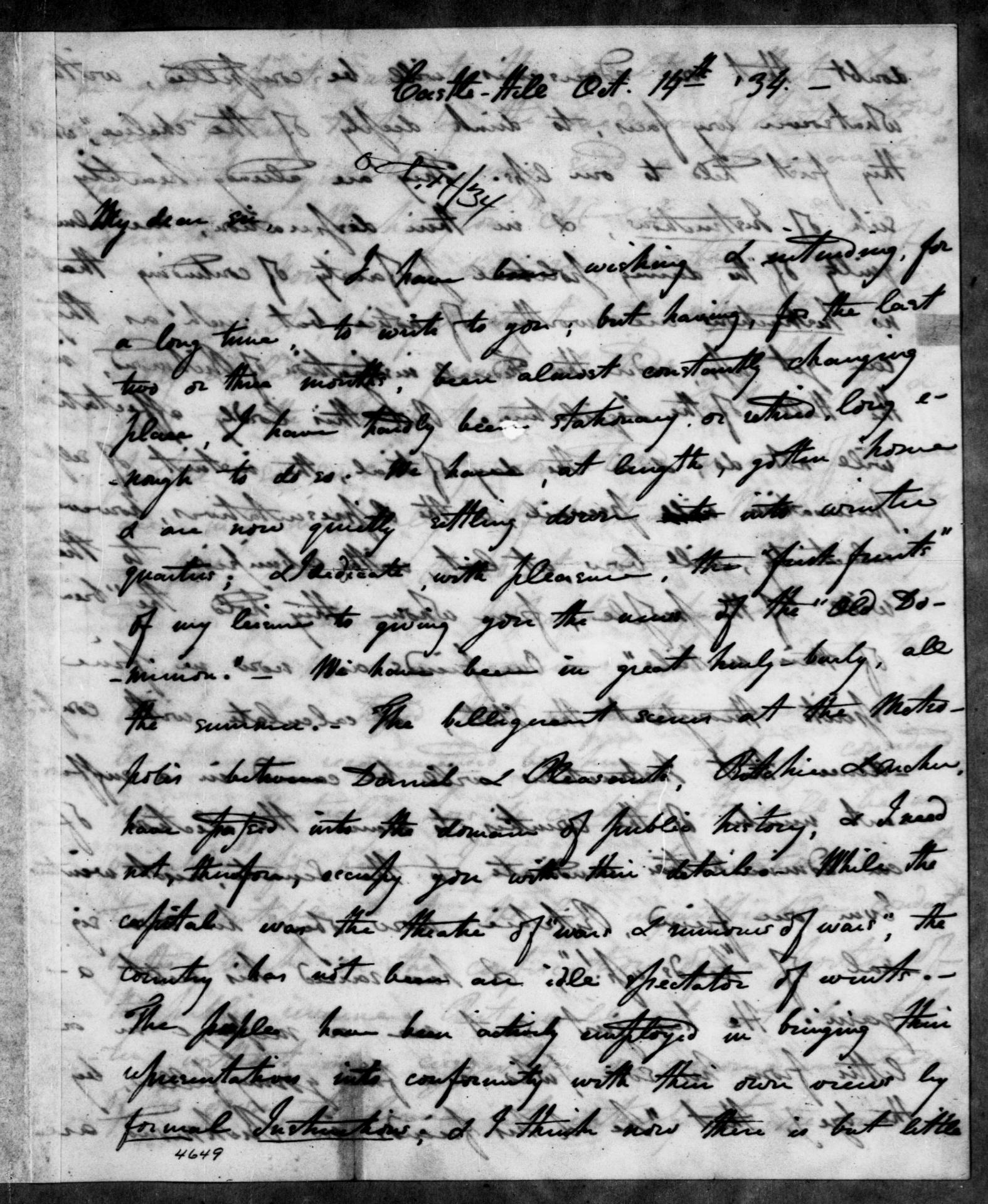 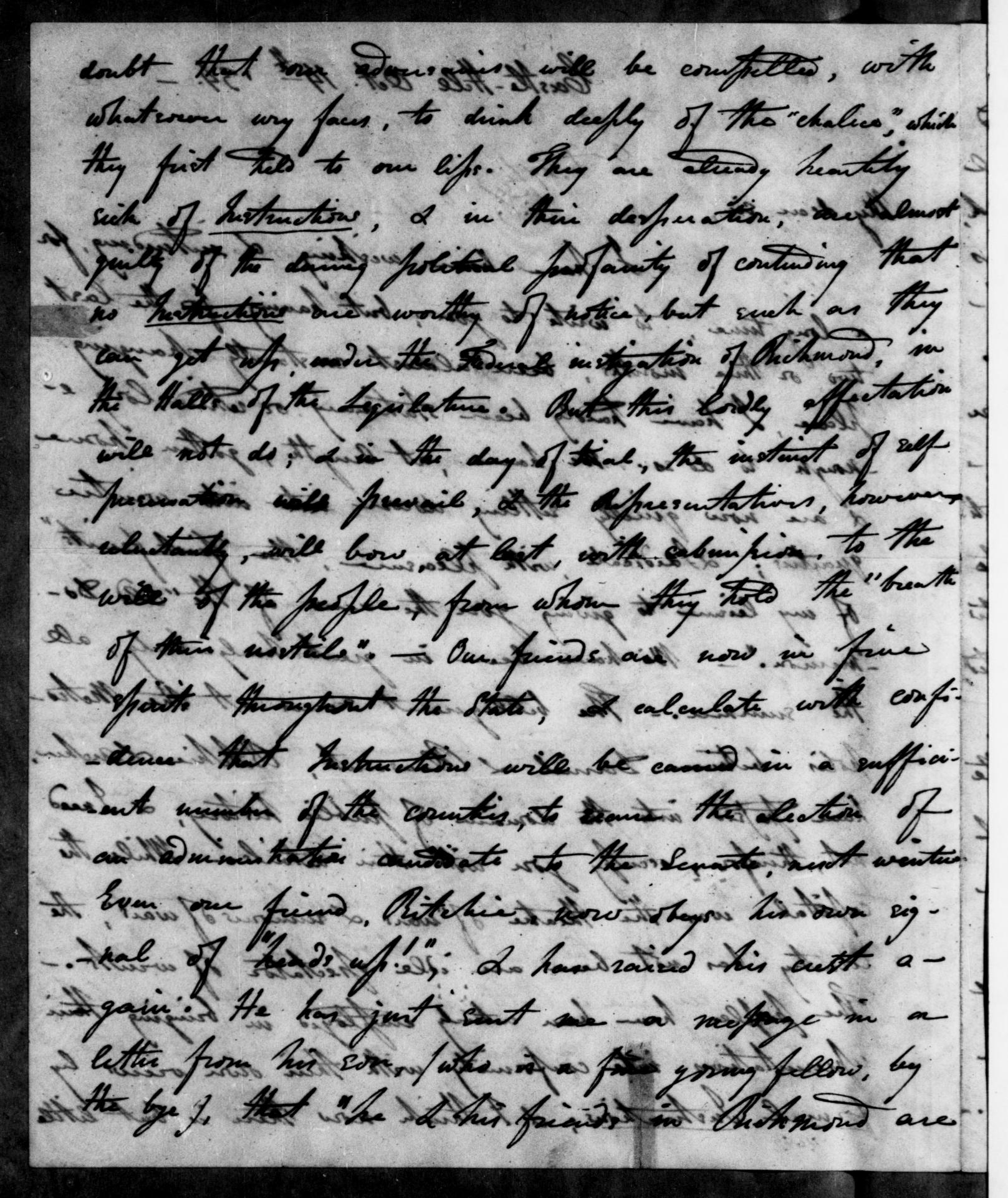 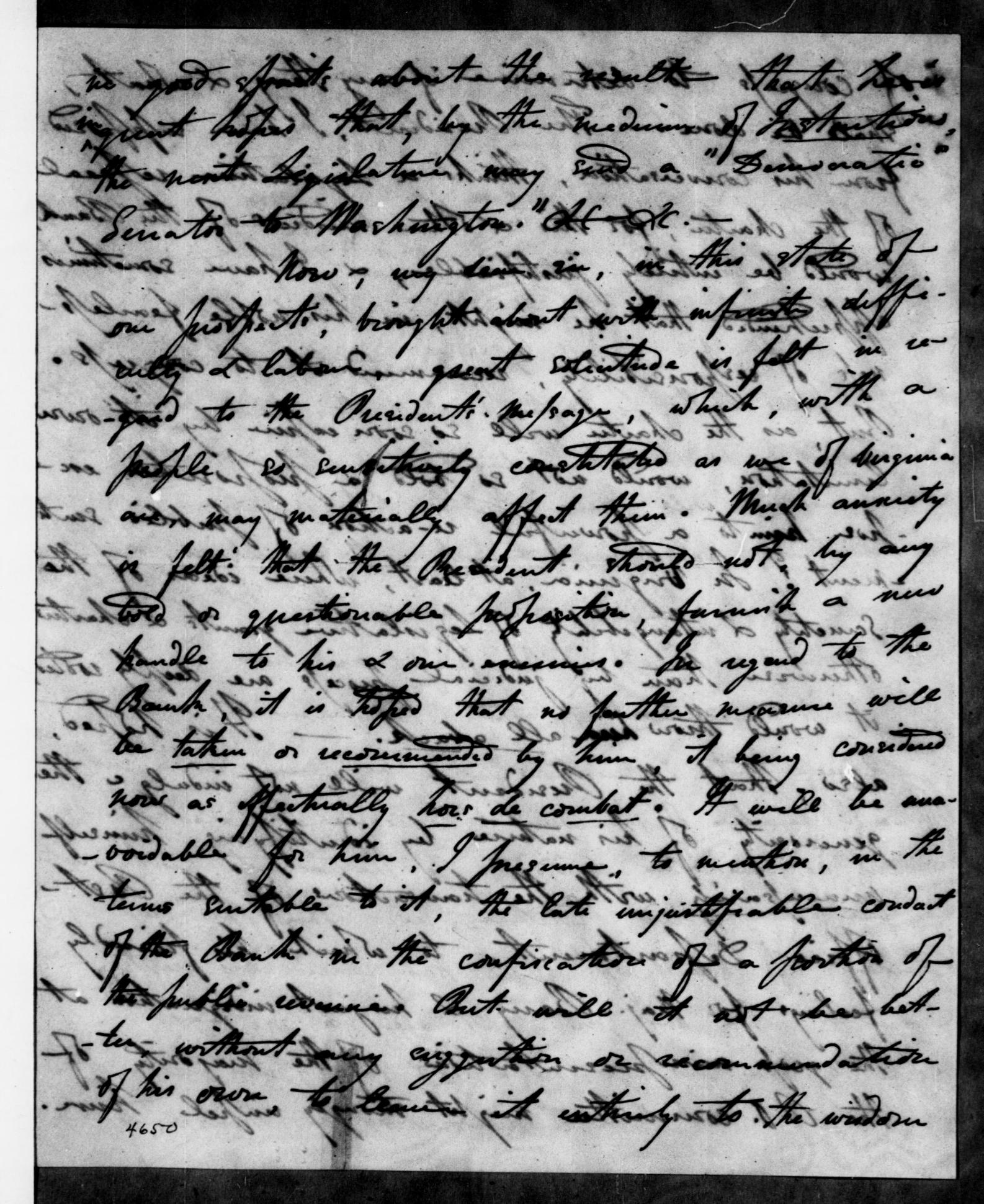 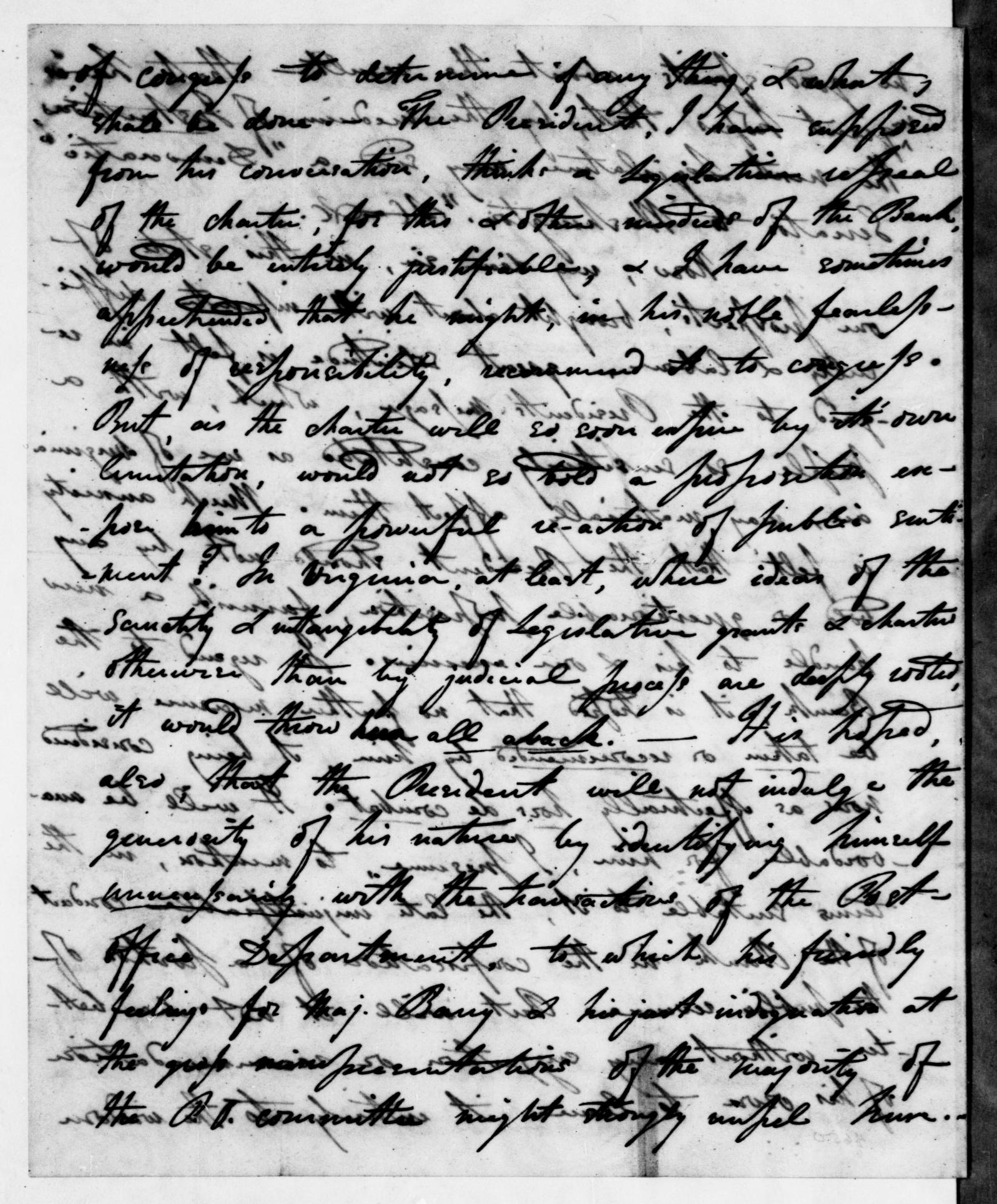 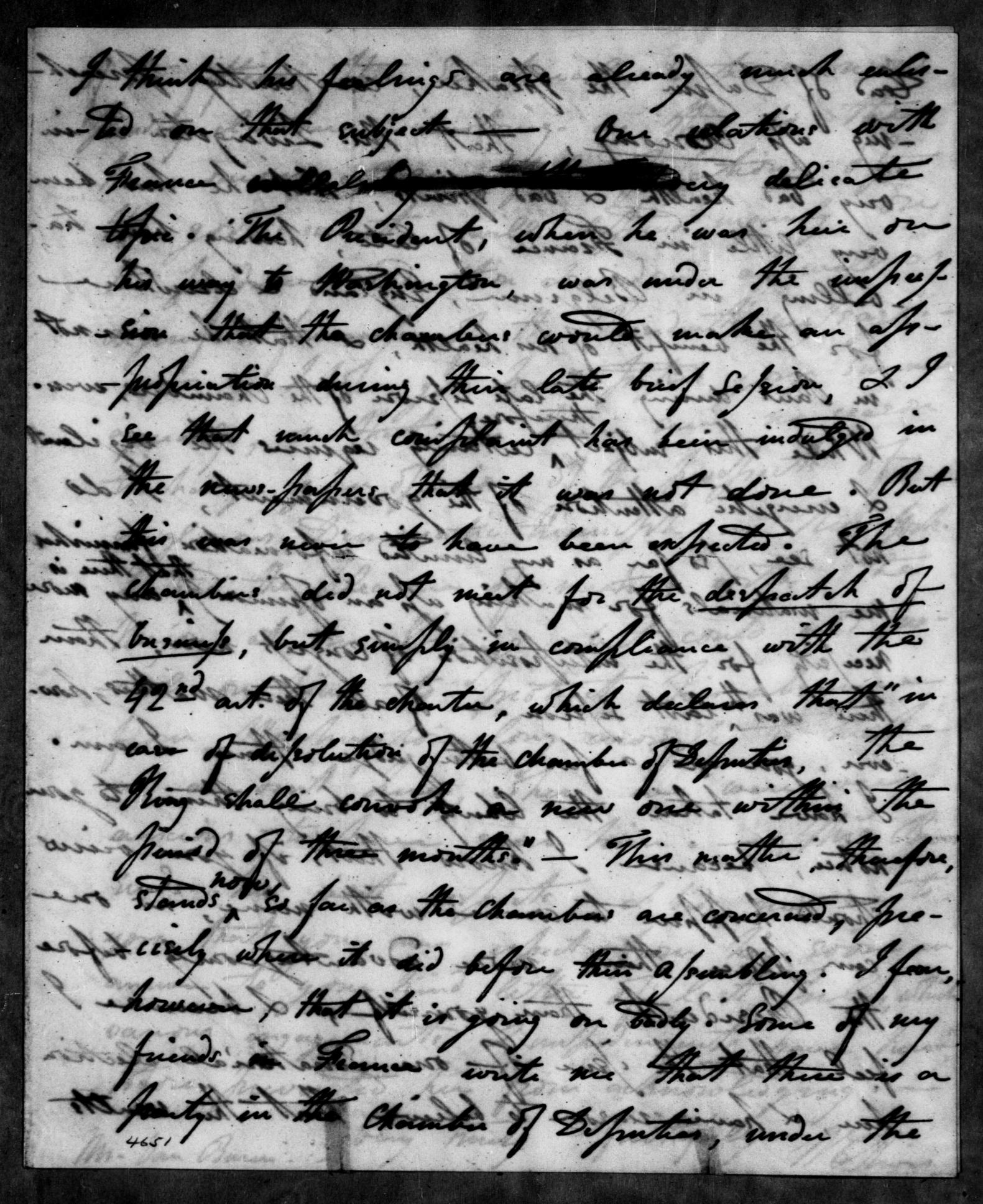 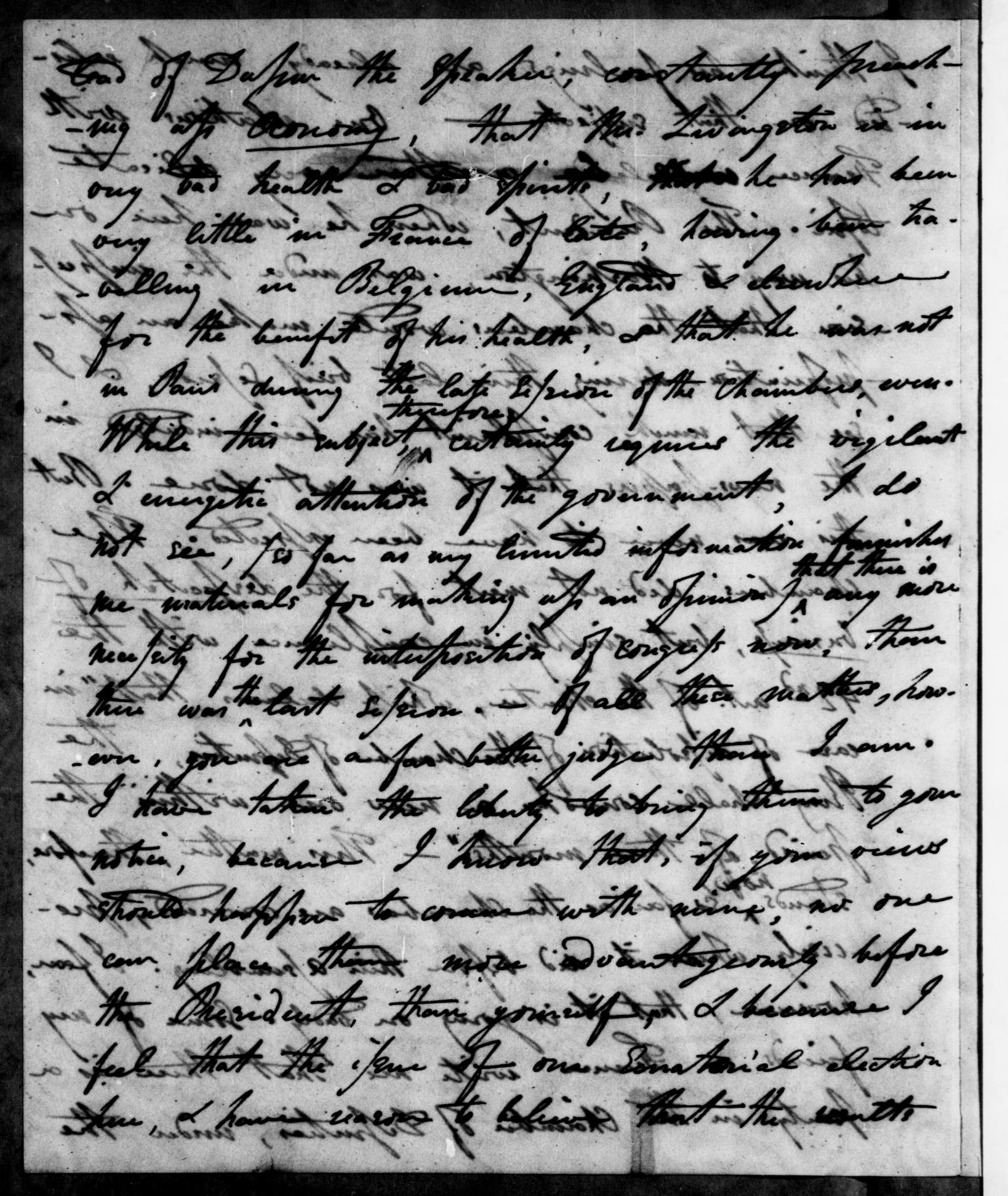 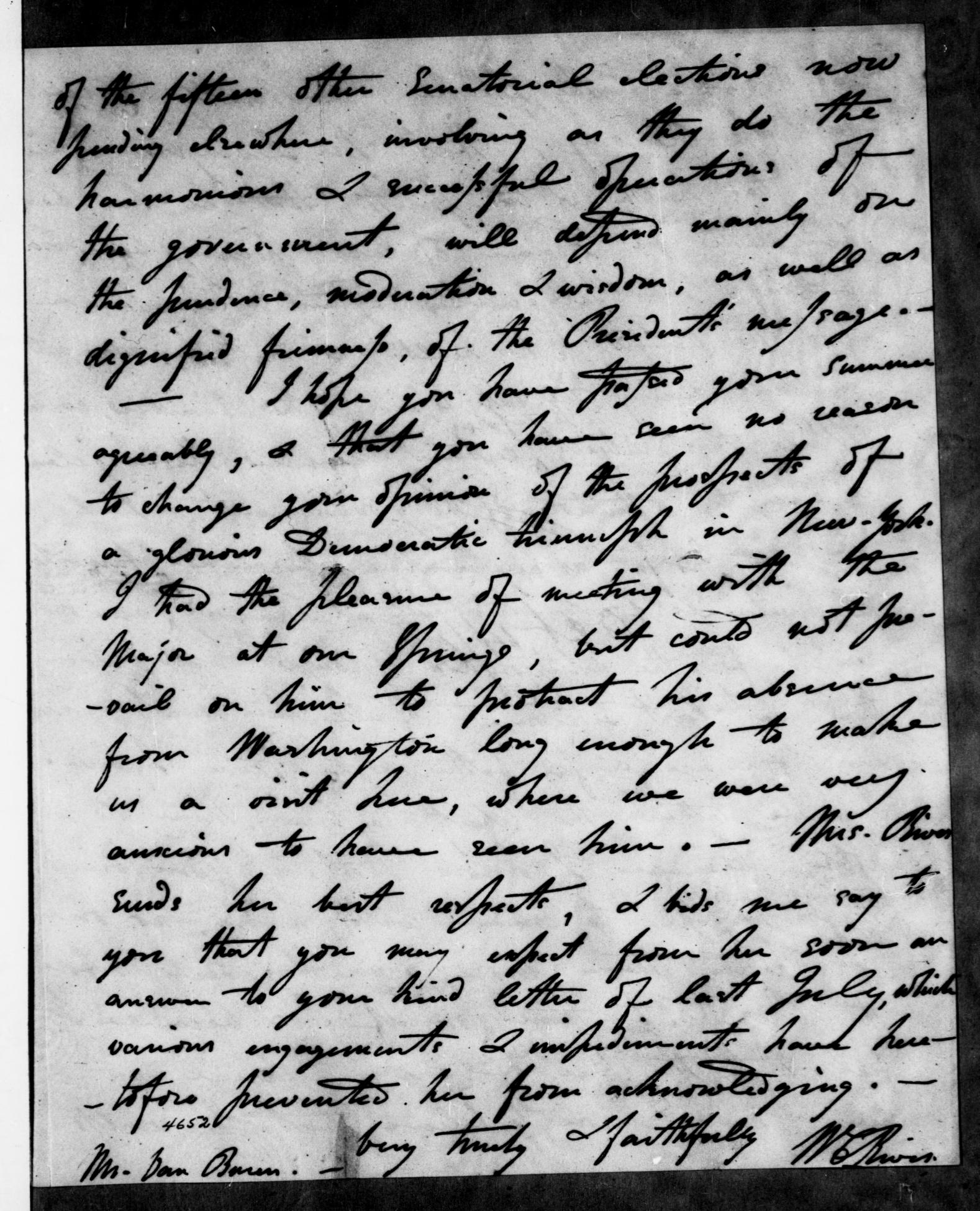 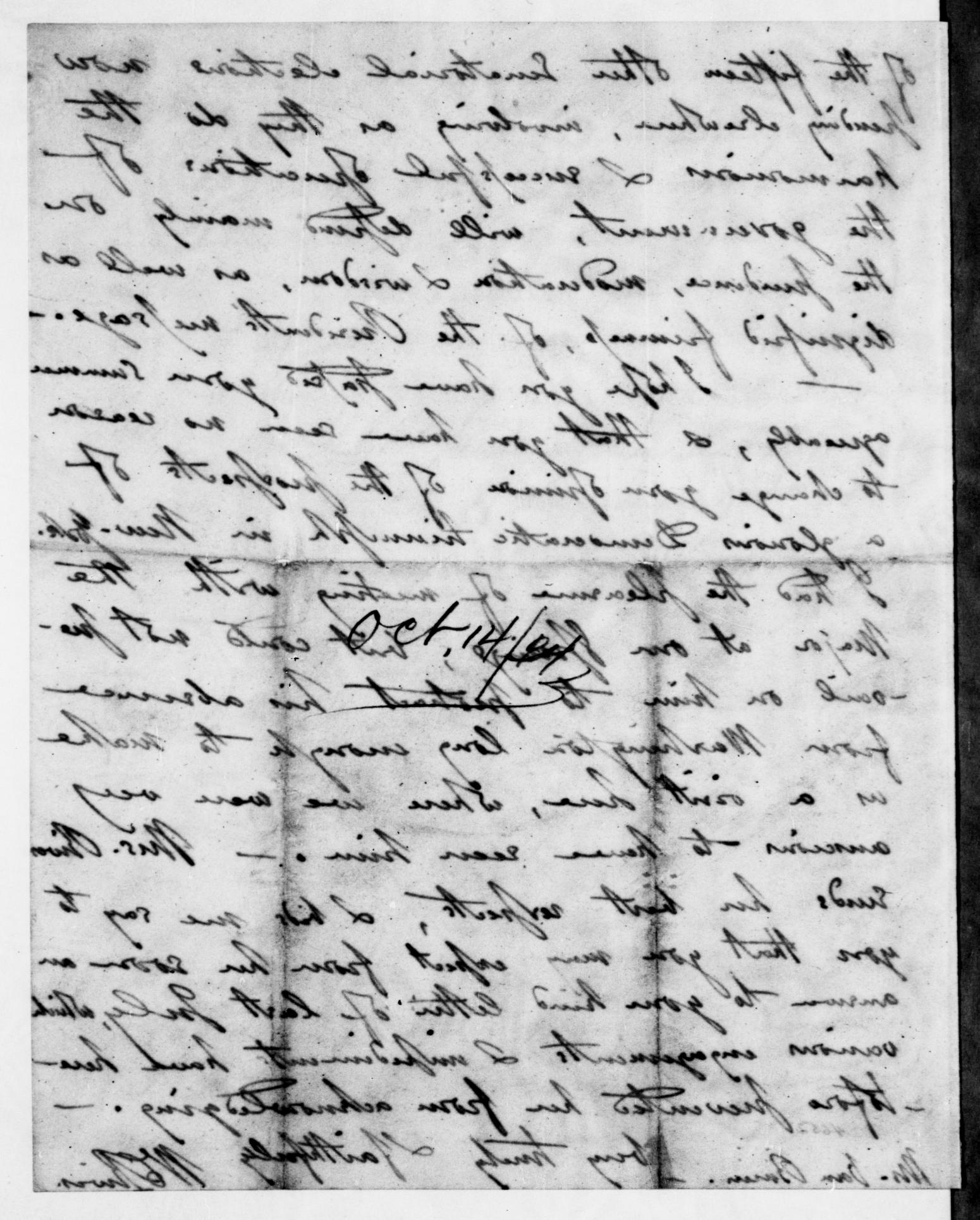