As you know I am a bad correspondent. Since I have been at home company & impaired health has prevented me from writing to any one unless on public business.

I am just returned from Nashville where I was invited to meet my friends, by a committee of the citizens of Nashville & its vicinity and, also by a committee from the convention, and where I sat down surrounded by upwards of fifteen hundred of my friends, and from appearences, all animated by one voice. The members of convention entirely united approving of the course of the administration, and all united in harmony & feeling on the prospect of a stable metalic currency instead of rags, & hailing the event as the precursor for putting down all national Banks and thereby to preserve the morals of our people & our free institutions.

To the great disappointment of the members of convention, there were no toasts permitted but two. 1rst, The health of the president, & in return I was called upon for a sentiment. You will see it, and it came upon the ears of the Bank arristocracy with as much surprise as the toast I gave at the Jefferson dinner in washington. All my friends applaud the sentiment as appropriate for the occasion. Grundy & Carroll ^& Col Polk^ delighted with it-but I am told Mr Bells friends received ^it^ as a death blow to the Bank & a Bank, & are trying to secretly impress the people that it was intended as a death blow to Mr Bell. This is entirely political & gratuitous. I am Bells personal friend, he is mine, I believe; I am also his political, if he will adopt what I believe the true policy for the safety and interest of the country-but I am for a stable metalic currency, & against the bank & a bank. For if we burn the old Phenix, and foster a young one from its ashes, the young will grow as hateful & injurious as the old one, I can see no difference between them, and if Mr Bell does not come out clearly and distinctly against all national Banks he is politically destroyed. My toast was to undeceive & preserve all from such delusions, & to convince all that with my approbation no national Bank could be chartered.

I fear the Bank influence will destroy Bell. His constituents are fearful of him from his silence ^last congress^ and unless he comes out against all national Banks he will have opposition of the strongest kind, and I fear the bank influence will prevail over him, all his Nashville friends are in favour of a Bank & for Mr McClain Mr. Ephraim Foster at the head-whilst his father, the Govr., Grundy, &c &c &c are deadly hostile to both. Grundy told me the other day he would go the whole hog for you, and this openly & boldly whenever it became necessary. The silence of Bell last congress has demolished his popularity in the state with all republicans, they believe he is in favor of the Bank, & he has no alternative left but to come out openly to relieve himself. The Bank junto will endeavour to keep him with them. I hope he will have more sense ^than to be destroyed by them^

If Newyork, Pennsylvania, & Ohio does their duty at the polls in october next, all is safe. One thing your state ought to aid the government in. The U. States Bank has formed the plan (so says Govr. Findly) to take in all the gold as it is coined at the mint, and thereby prevent its circulation amonghst the people, thereby preventing the people from seeing & benefitting by the metalic currency, whilst their hired presses are crying out, the gold & metalic bills are a hoax upon the people, and all done for political effect, that these bills are an injury instead of a benefit to the people. This must be counterted, as far as it can be, by the administration, the states and the people. The State of Newyork and her Banks can do much in athwarting this wicked attempt of the U.S. Bank in this wicked attempt <at> <a> ^plan of^ monopoly of the Gold. Attend to this. I have wrote Mr Woodbury on this subject. Your Banks can aid much in purchasing the bullion as well dug from our soil as imported^ and have it coined & circulated thro your State. It will soon again makes it way thro the hands of the people, gladen their hearts & return in part to the Banks & be in the country to sustain the Banks in time of need ^against the runs made upon them.^ The mint is striking $20,000 in half Eagles pr day, when the die for the Eagle is ready it will ^issue^ $40,000-or 4 millions every hundred days. This will if well managed put an end to the evil of the paper system on the labour of our country-and leave commerce & the Banks to regulate their affairs in their own way, without effecting the vallue of labour, or of the property ^of the country^ by over issues and sudden withdrawalls, as is now, & has been heretofore the case; and will give peace to our country & perfect security to its labour.

Major A.J. Donelson has been unexpectedly called away from me to meet Emily and the three children who is on their way hither contrary to all our expectations. When he returns, he will aid me in getting up my business with which I am daily overwhelmed. My body weak & wants rest, and I am to day labouring under one of my severe head aches. Sarah & Andrew presents their kind salutions as would my two very interesting grand daugther & son, were they able to speak.

I intend returning to the city the last of September-when I shall expect to find your ideas upon the bill, I have held up, as ^well as^ any parts ^that have <illegible> <illegible>^ relative to the course & conduct of the Bank you may think necessary to be the subject of comment in my next message. Their late act of robery, by withholding the dividends, I mean to bring into view in bold relief connected with my last message & shew it to be a <real> <act> of robery. I must stop. I shall leave here from the 1rst to 10th <illegible> <illegible> therefore do not write me here unless it will reach by the 10th.

In haste & great pain in 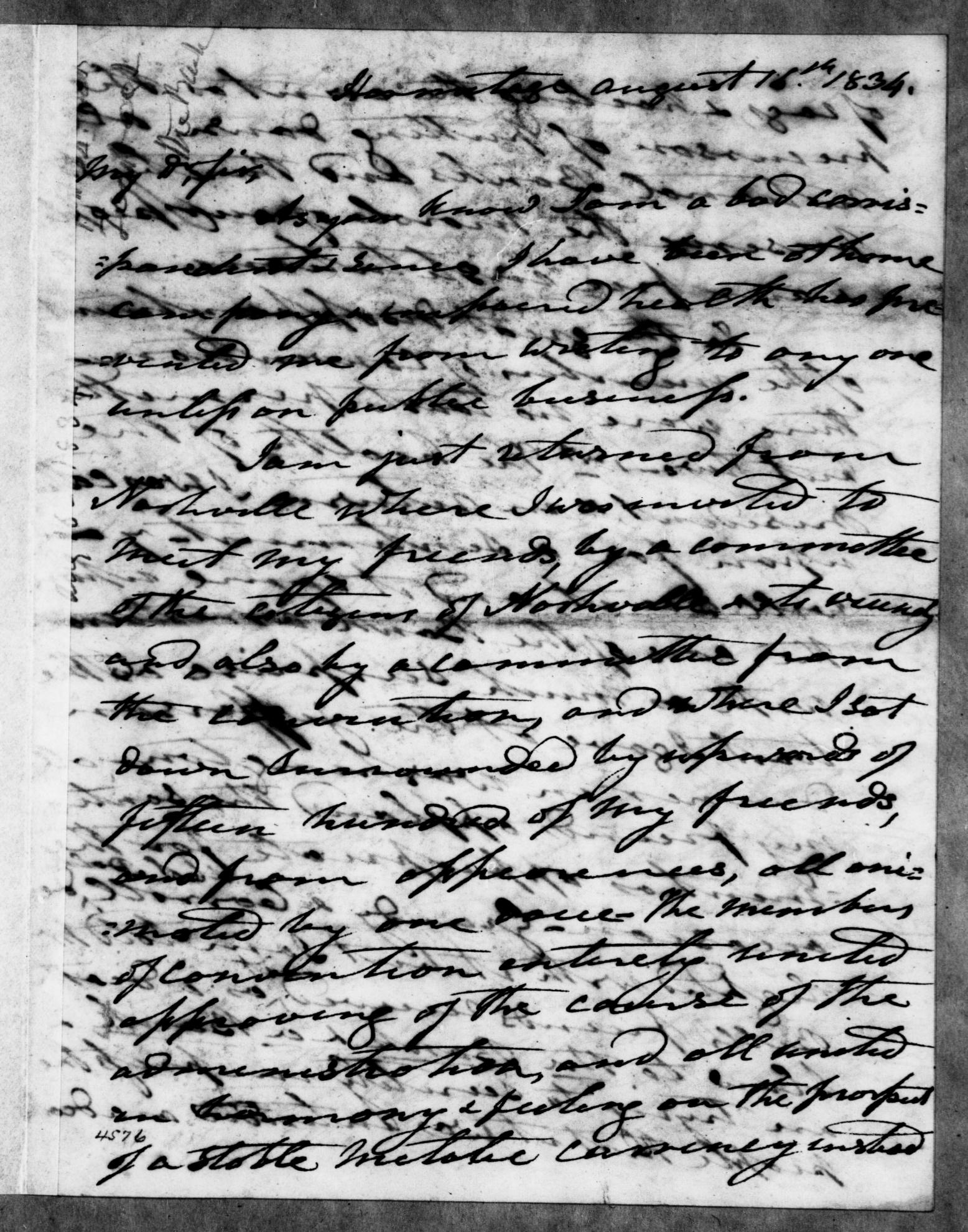 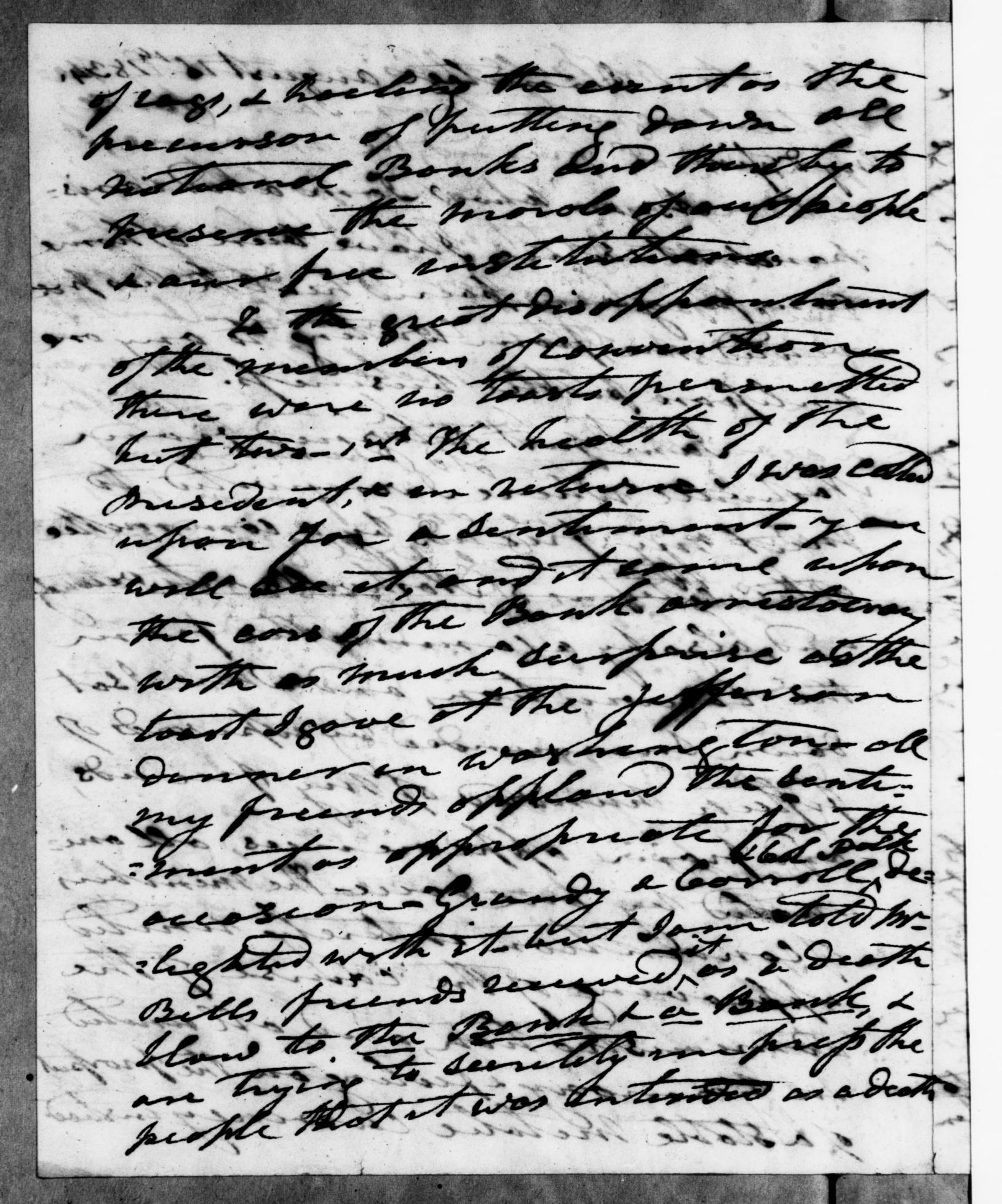 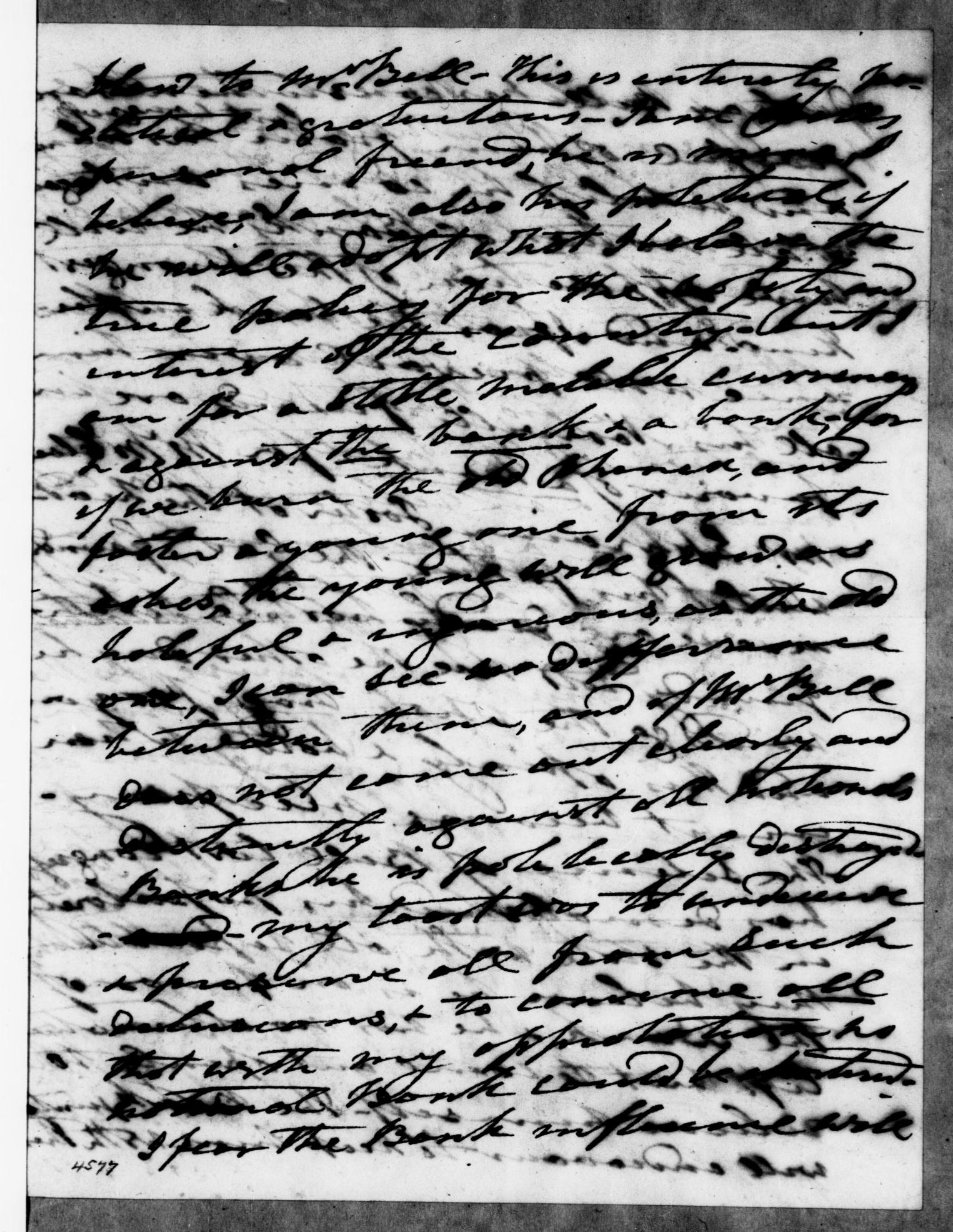 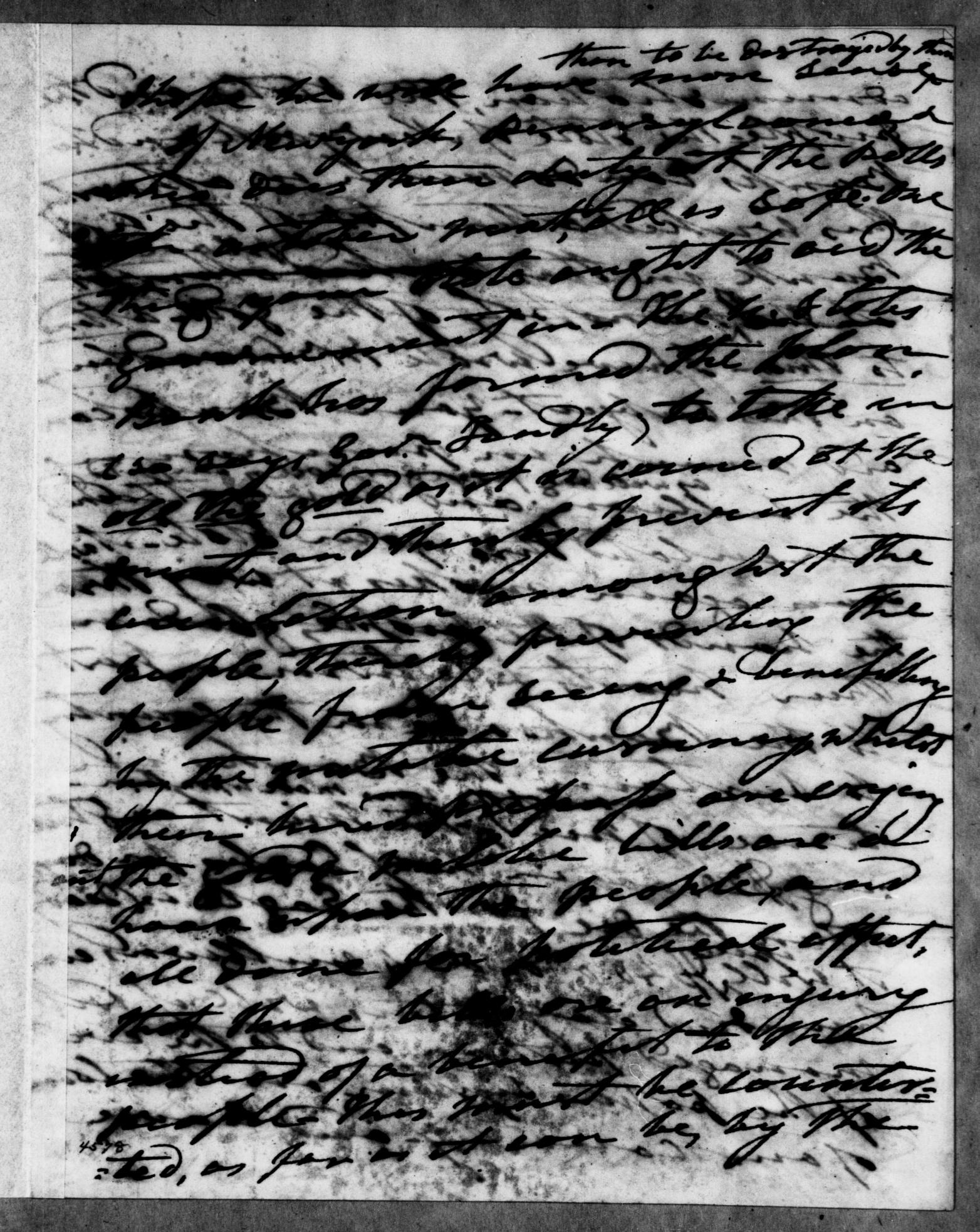 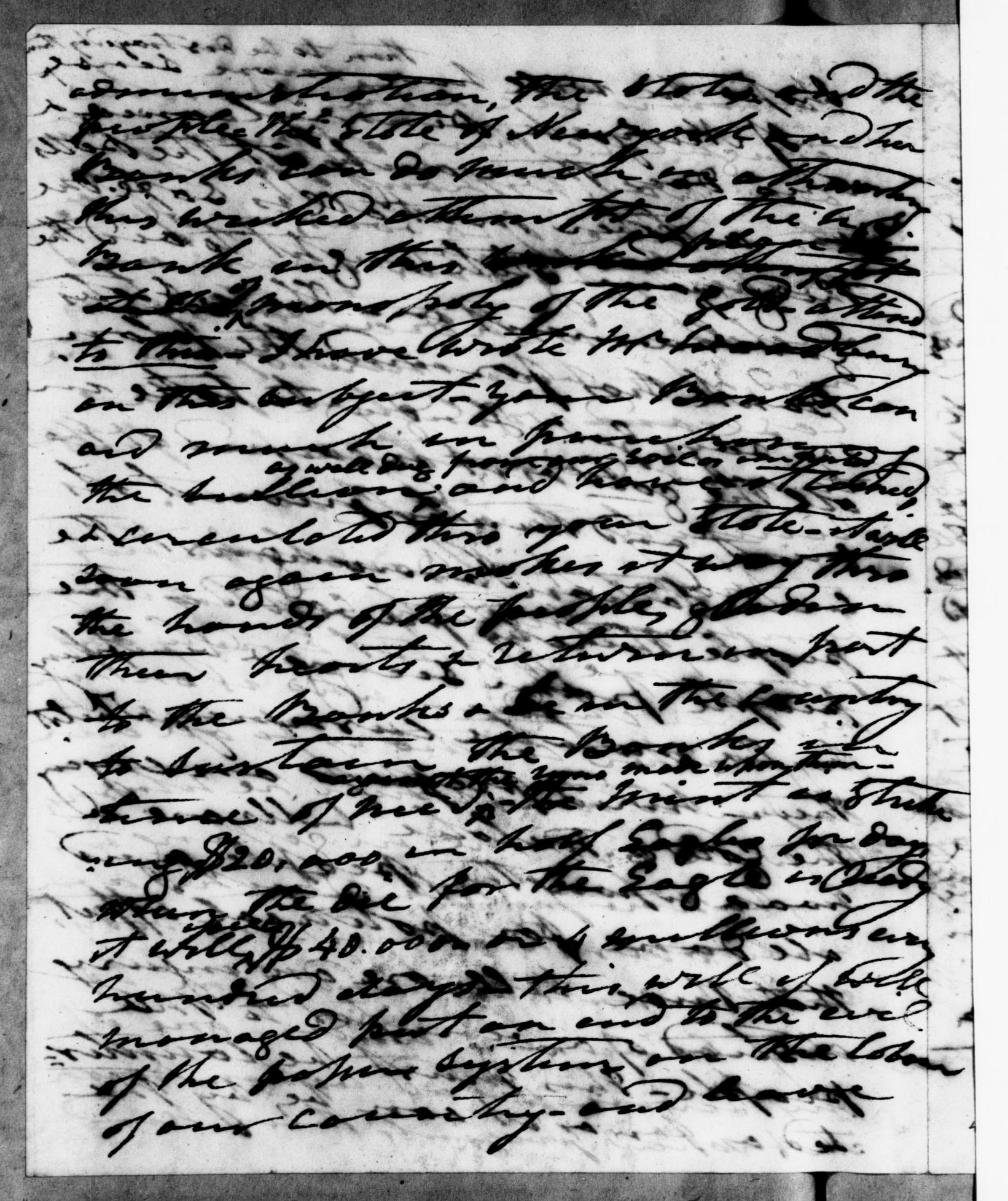 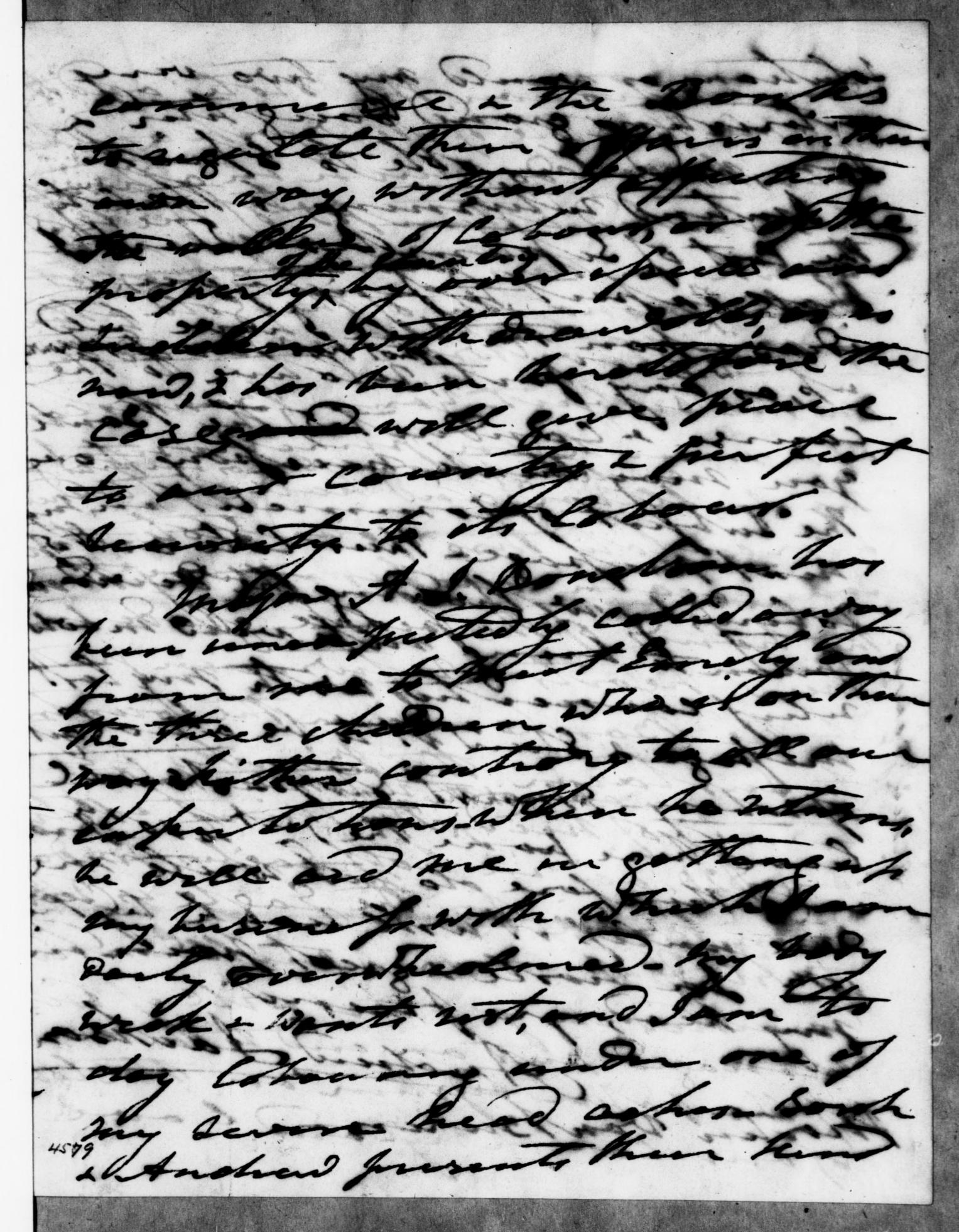 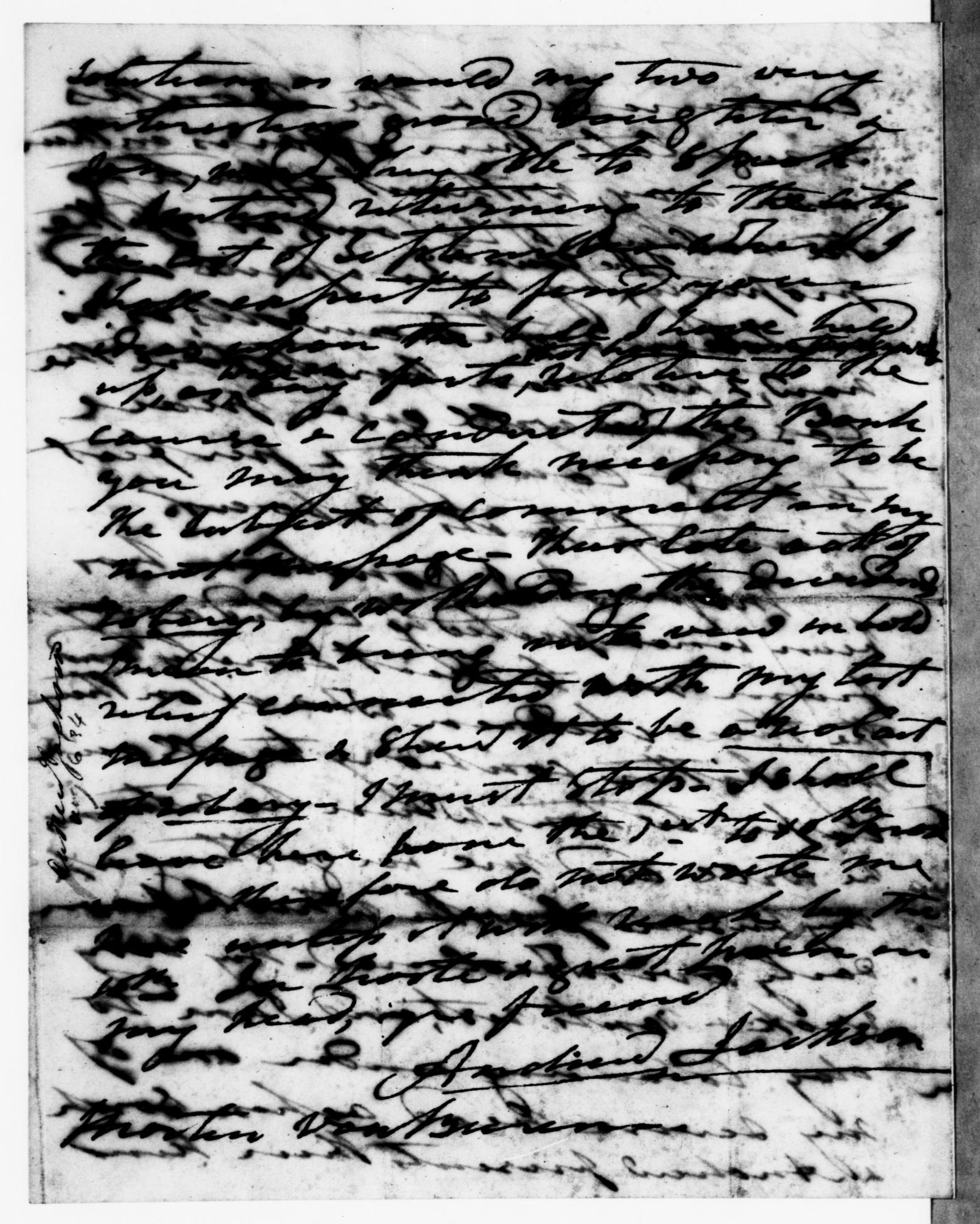 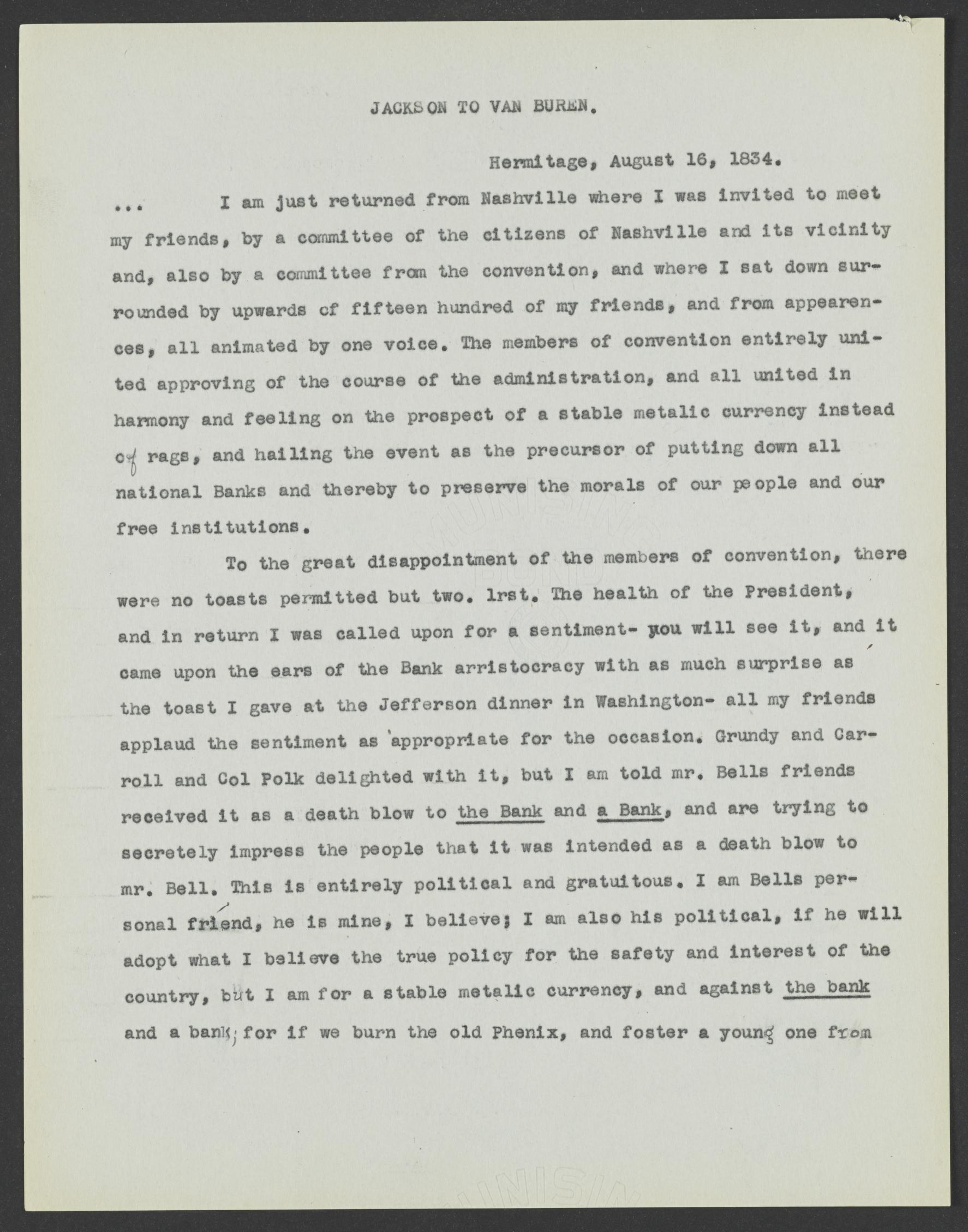 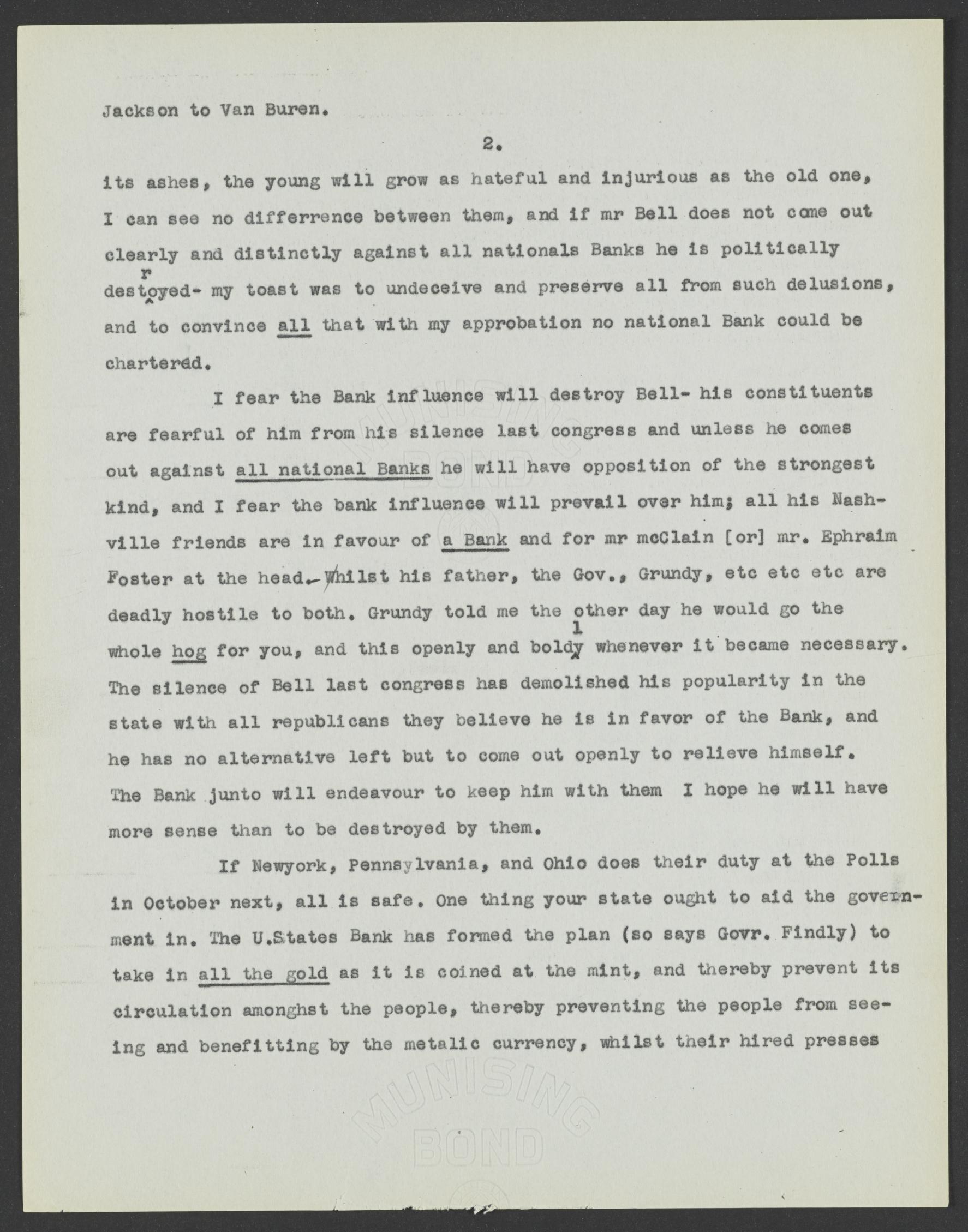 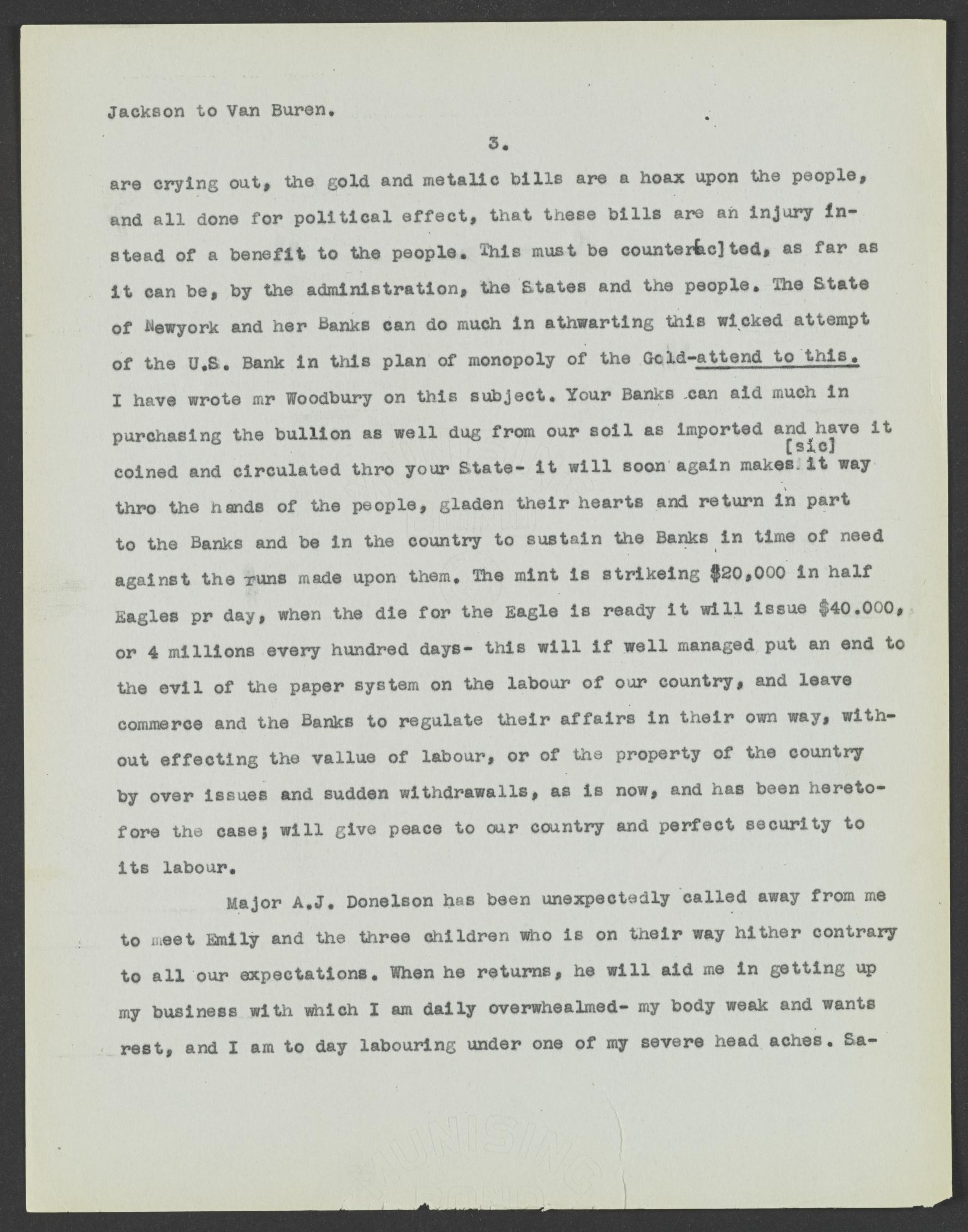 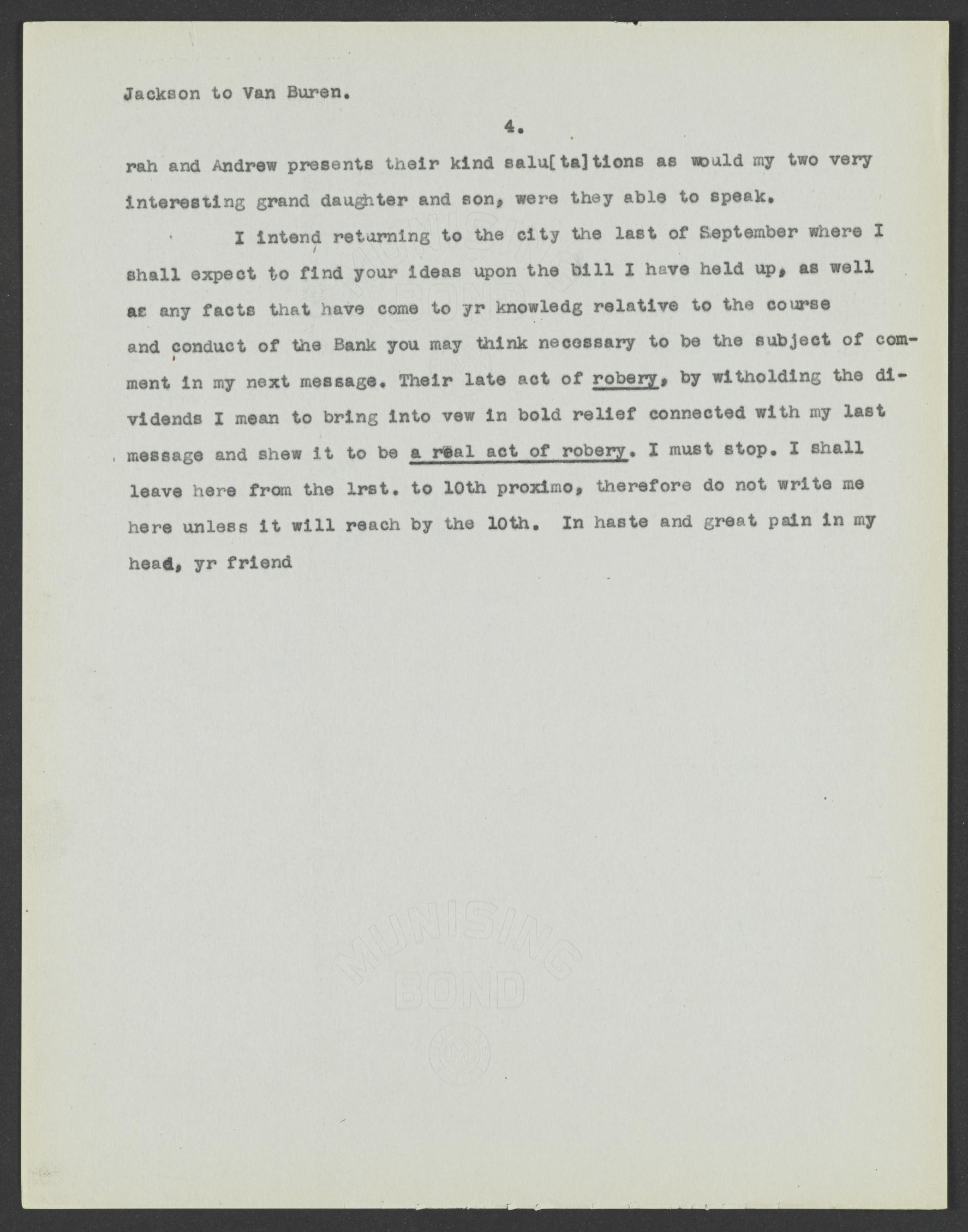