I was made happy by the receipt of your kind letter of the 8th Instant. The length of time during which we had no authentic accounts of you, & the rumours coming from the adversary, (false as they generally are,) had nevertheless created not a little uneasiness with many of your friends—an uneasiness in which I freely participated. Your hand writing, (an unerring test of mine) shews me that you enjoy your usual health, & that it may long continue so is my sincere prayer. Although I was disappointed in not receiving a letter from you on your journey, I knew you too well, & have heretofore participated too largely in your kindness not to be satisfied, that your omission to write was not with out reason. I am nevertheless not sorry that you have thought proper to make so feeling an explanation of it; as it gives me an excuse for saying, what, with my habitual and aversion to professions, I could not otherwise have brought myself to do. Once for all then permit me to assure ^you,^ that so conscious am I of the inflexible justice which marks the friendly relations between yourself and those who have the good fortune to <illegible> that light to <you> ^rank amongst your personal friends^ of the, as I firmly believe, unparallelled constancy of your regards; and so deeply am I penetrated by the evidences of it which, at a critical period of my life, as well as at all other times, I have myself recd, that it is not in the power of circumstances to modify, much less to change the feelings and opinions which I cherish upon those points, & which, happen what may, will go with me to my grave. It is only when distance seperates us that I have it an opportunity to give full vent to those feelings, & then they come upon me with irresistable force. When we are together at Washington the cares and vexations of the public service leave no moments for the indulgence of personal feelings. With out ^Believe me that^ whatever you do, that can by possibility bear upon me, I always take it for granted (although I may not be able to comprehend it at the time) is intended for my benefit, and sincerely entertaining the conviction that your foresight & judgment in such matters is superior to my own, I am quiet, & content. Asking that this may stand as a perpetual record of my faith, I will neither now, nor hereafter, say any thing more upon the subject.

I am rejoiced to hear that Tennessee is agt. a Bank as well as the Bank. That is the only positon worth occupying. If a national Bank of any description were established, the stock would inevitably go into similar hands. Whatever restraints were allowed in the first charter, for effect, would soon be given up by Congress under some plausible pretence or other and the great struggle through which the country has passed, would be rendered altogether unavailing. Indeed I have not a doubt that, if for no other purpose than to make the victory over the people more conspicuous, Nicholas Biddle would be appointed President of the new Bank, & installed in the full plentitude of the power he has so greatly abused. By a course like this, the stand which has been taken by the people, & which would have done honor to the brightest period of this or any other Republic, would but furnish a topic for the jeer, and revilings, of the enemies of the Republican principles. On you my dear Sir more, vastly more than on any other man, or set of men, it depends, under the Providence of God, to save our Country from such burning shame. You have commenced the good work, & you must carry it through. You will not therefore I hope fail upon all proper occasions to frown upon this fraudulent, & dangerous, & heretical, distinction, between the Bank & a Bank—a distinction which must be rendered odious & inoperative, or what has been done, will have been done in vain.

I was attacked whilst at Saratoga with the Erisypelas, & have come to these waters to wash & be clean. I am nearly so already, & will then go into the western part of this State. The opposition struggle hard but die they must. The current of public opinion is strongly with us, & we have nothing to apprehend except what can be done by the positive corruption of the Bank.

I enclose you a letter from Forsyth with its enclosure, which will explain themselves. When I spoke to you at the instance of Forsyth you informed me, & authorized me so to say to him that if the appropriation was made or when it was made you would cheerfully appoint his friend. It was at a period of great excitement, & I presume the circumstance had escaped your recollection. If you can set it right I know it will give you pleasure to do so, & if not Mr Sanford must be reasonable.

The opposition papers here are waxing warm upon the subject of the vacant seat on the Bench, & swear, in substance, that it shall be filled by none but a friend of the Bank. I shall endeavour to obtain an article from the Albany Argus shewing the ground taken upon the subject here, & send it to you.

P.S. Our friend <Vaux> has been with me for several days & desires to be kindly remembered to you as does John & Smith. 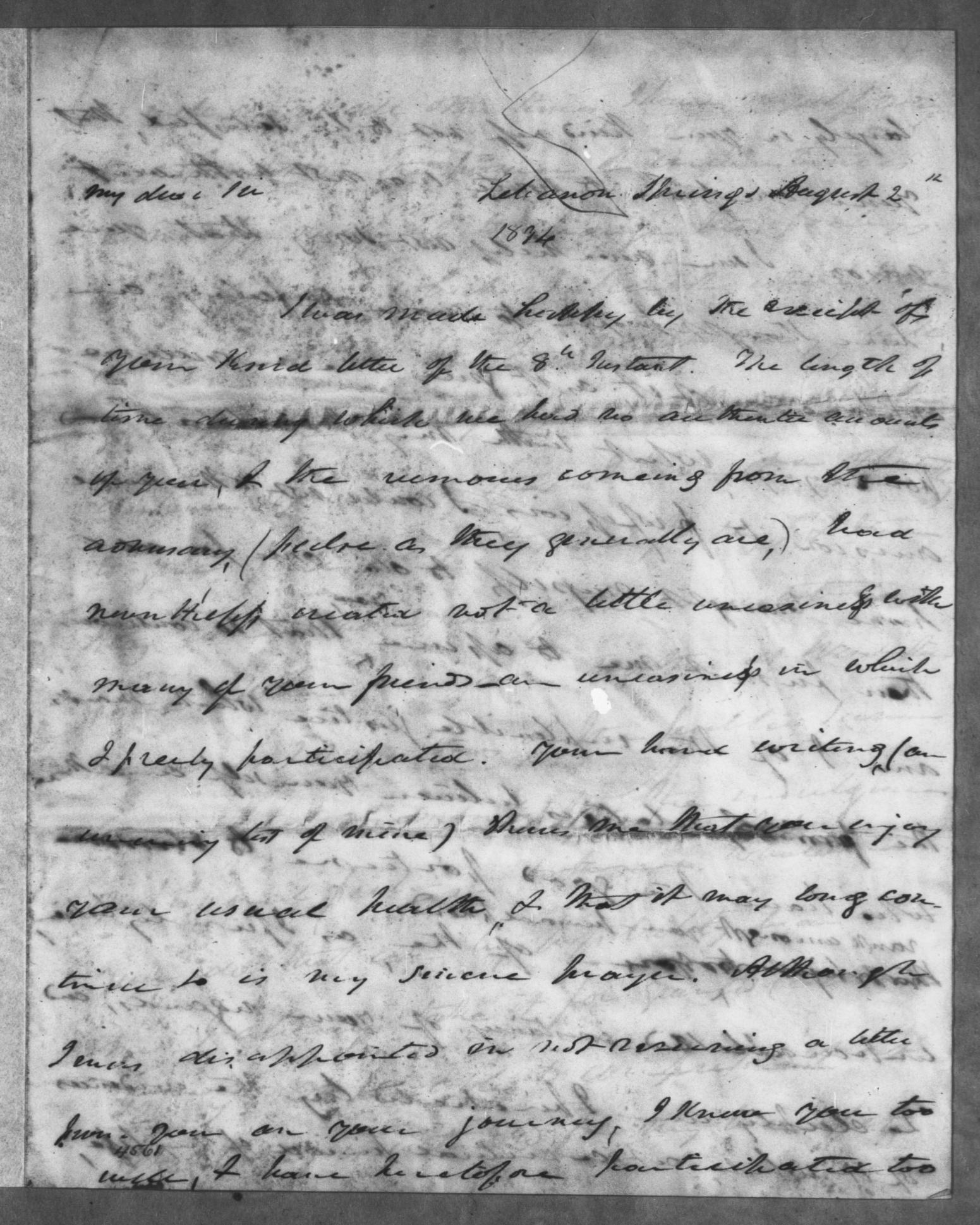 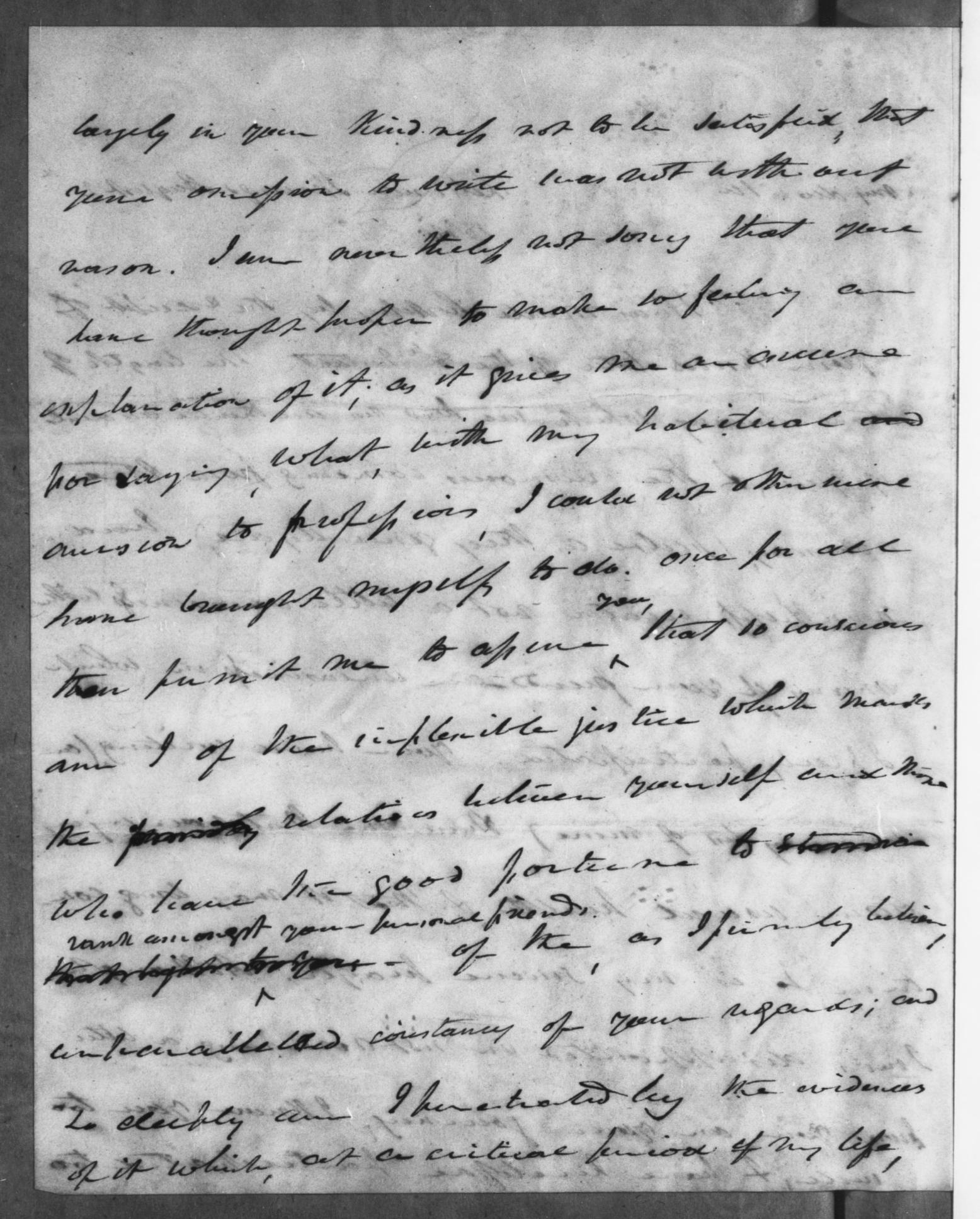 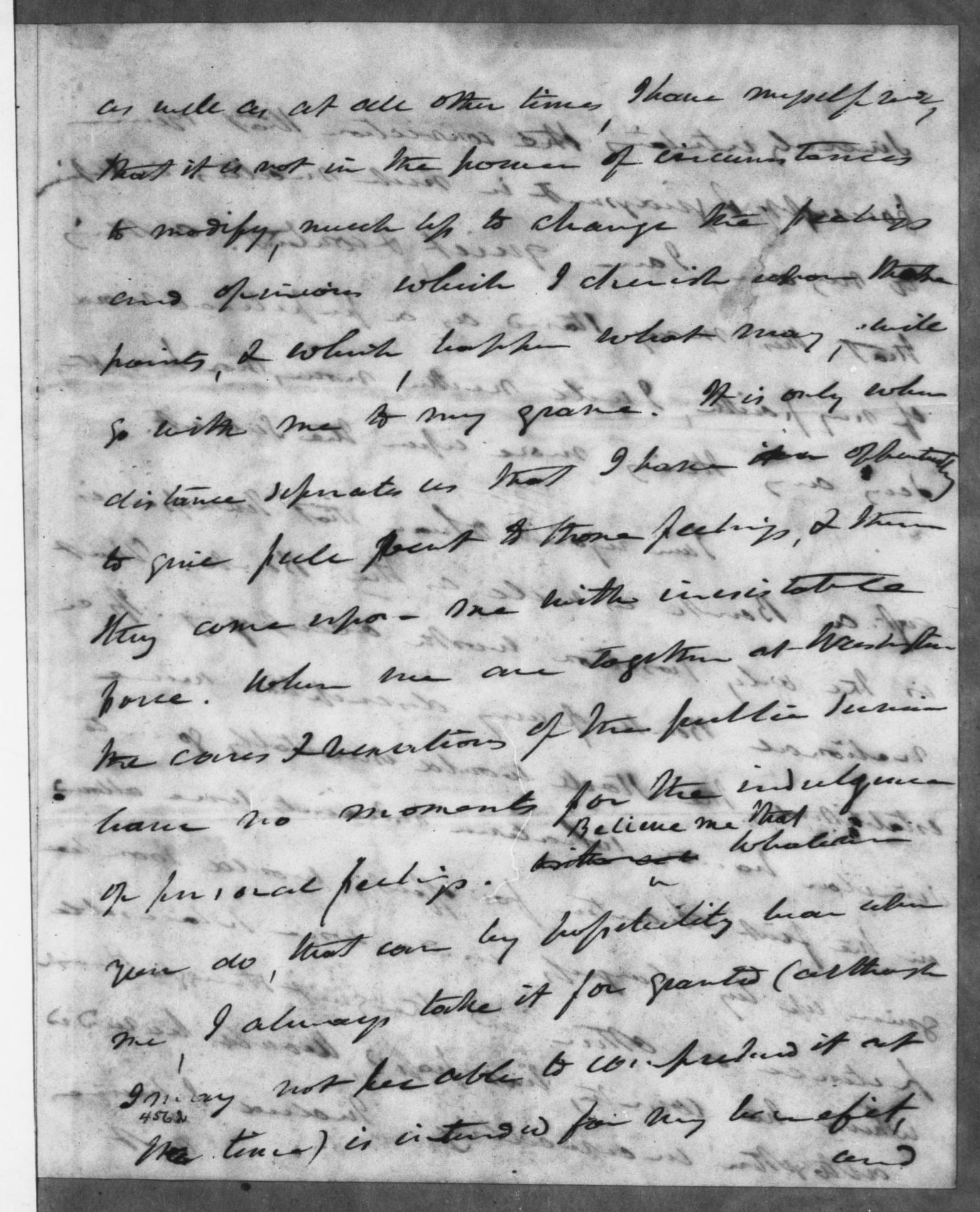 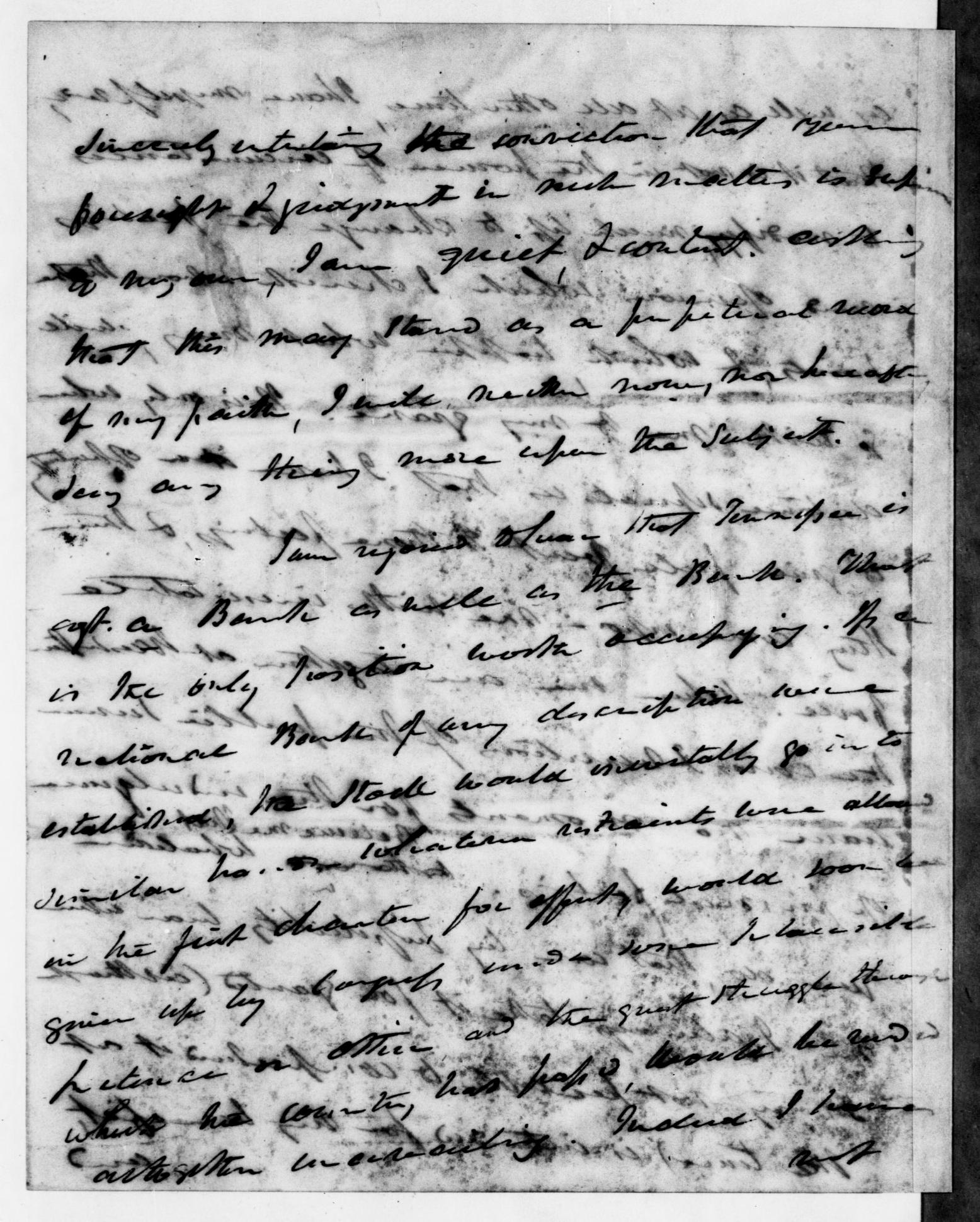 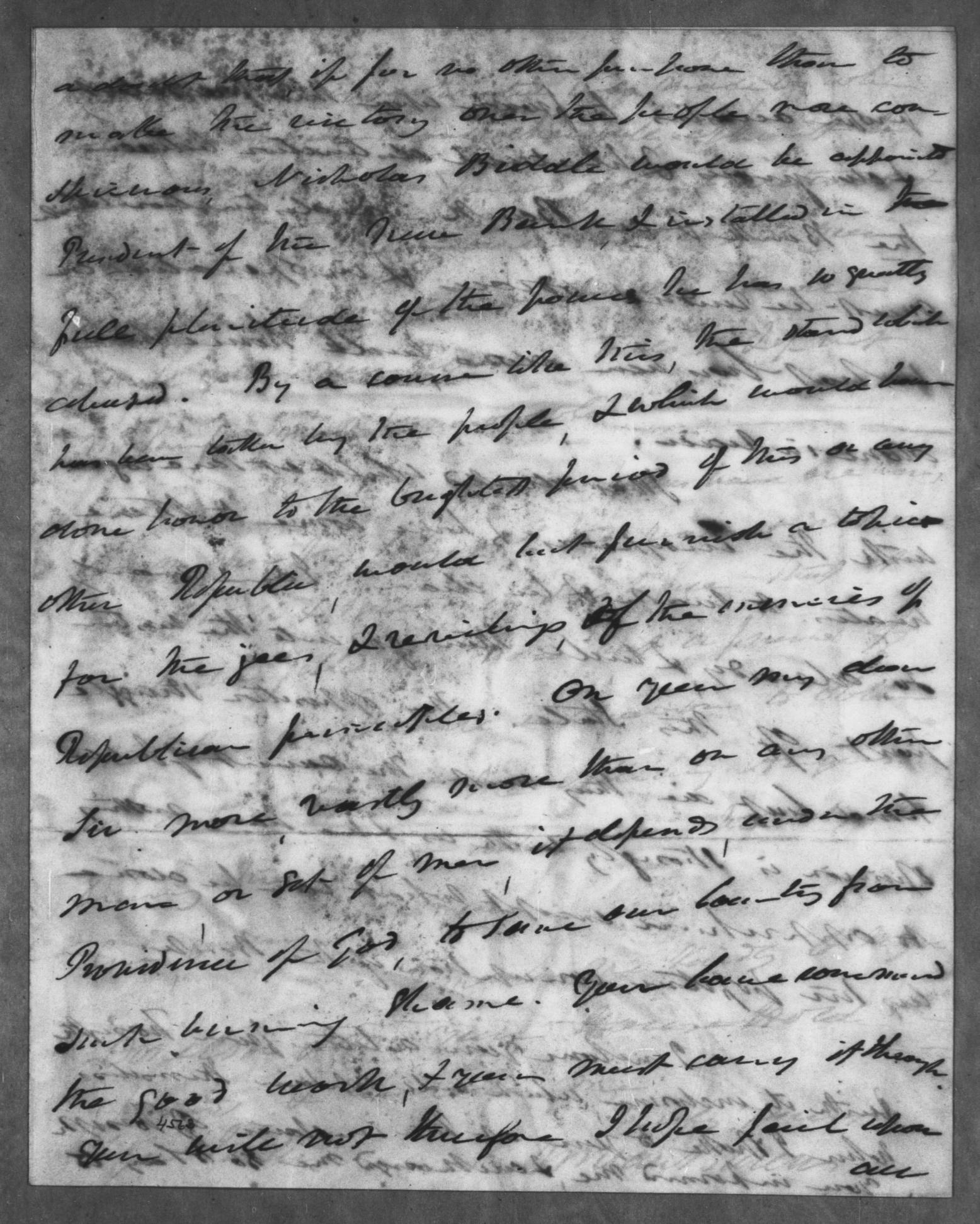 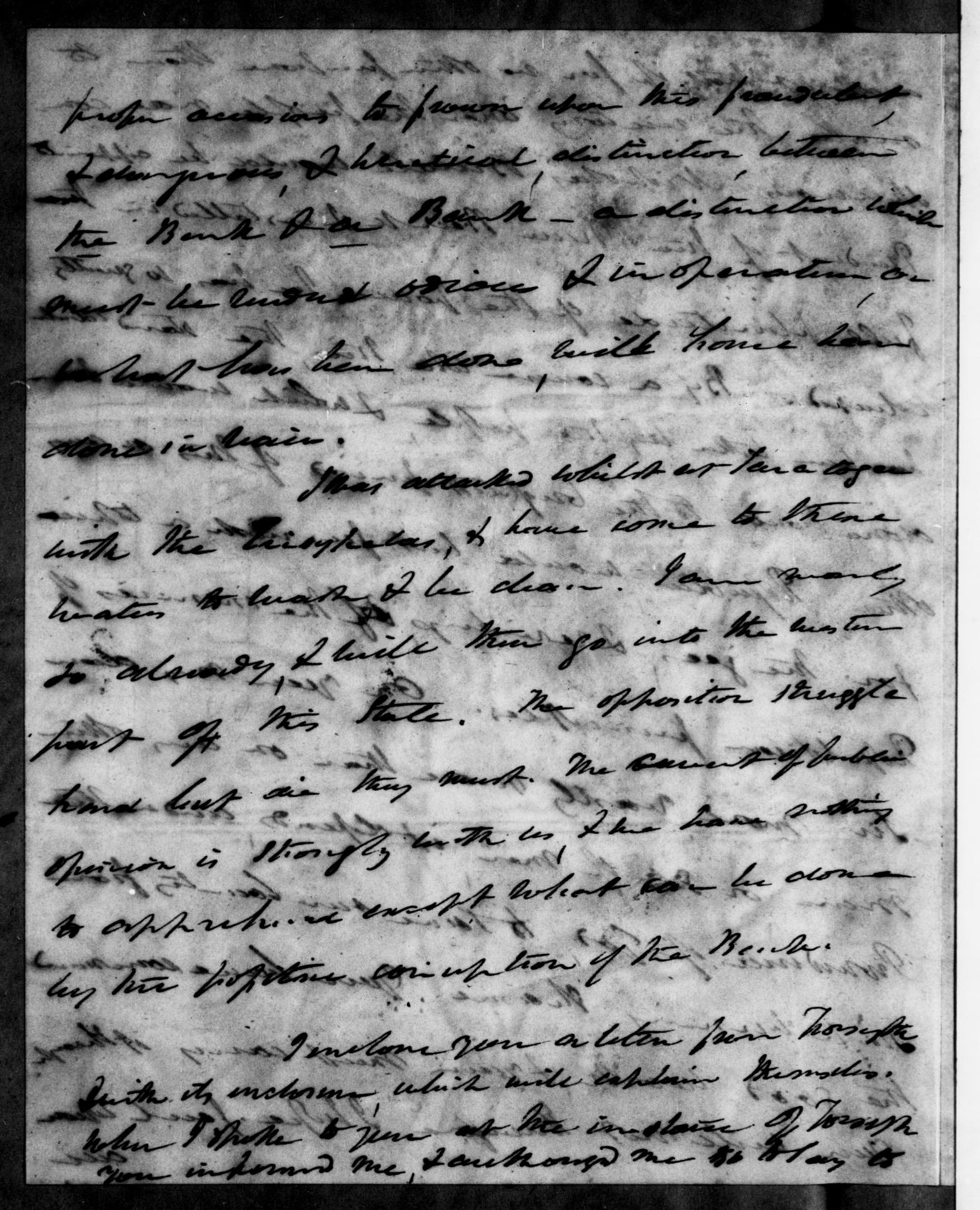 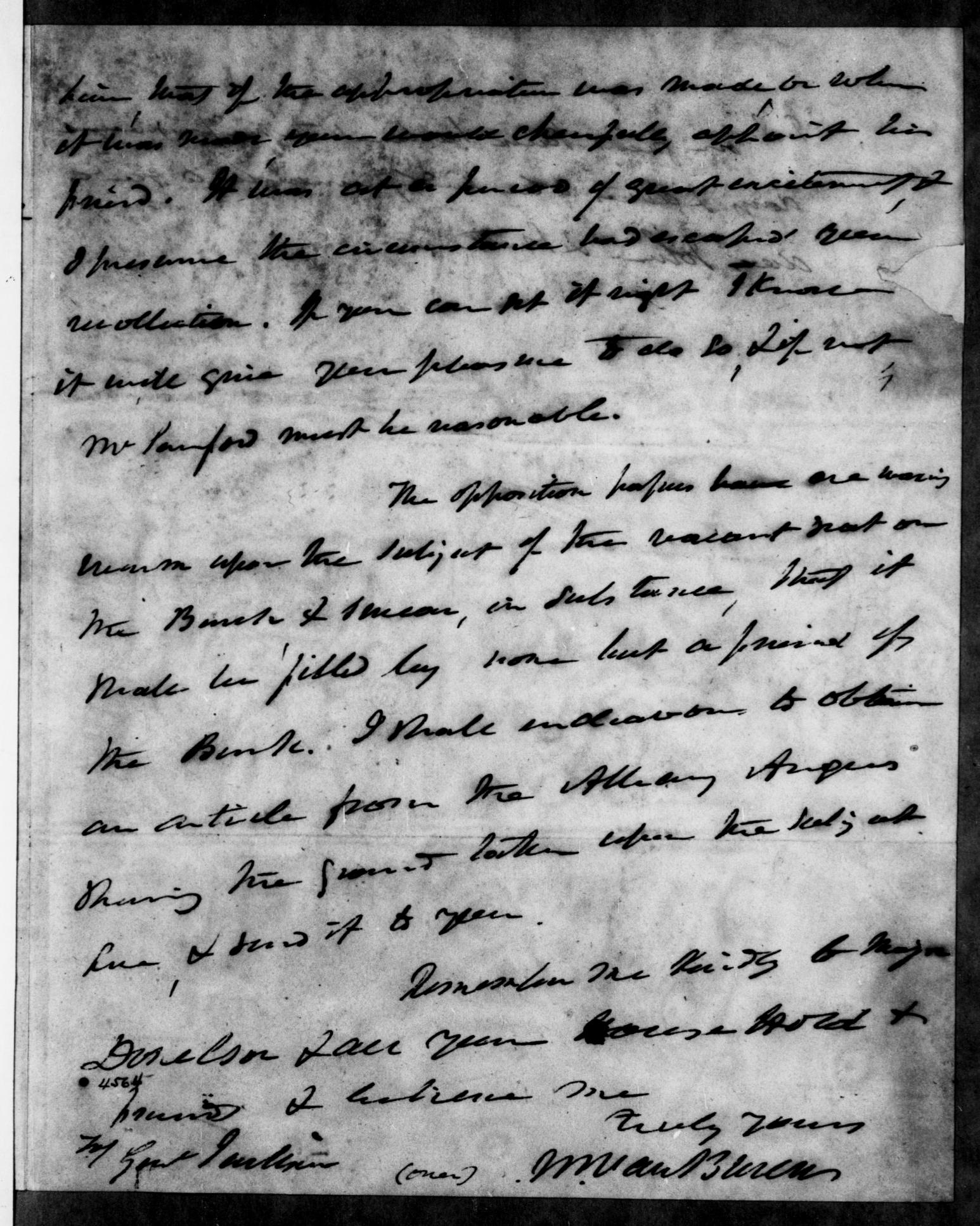 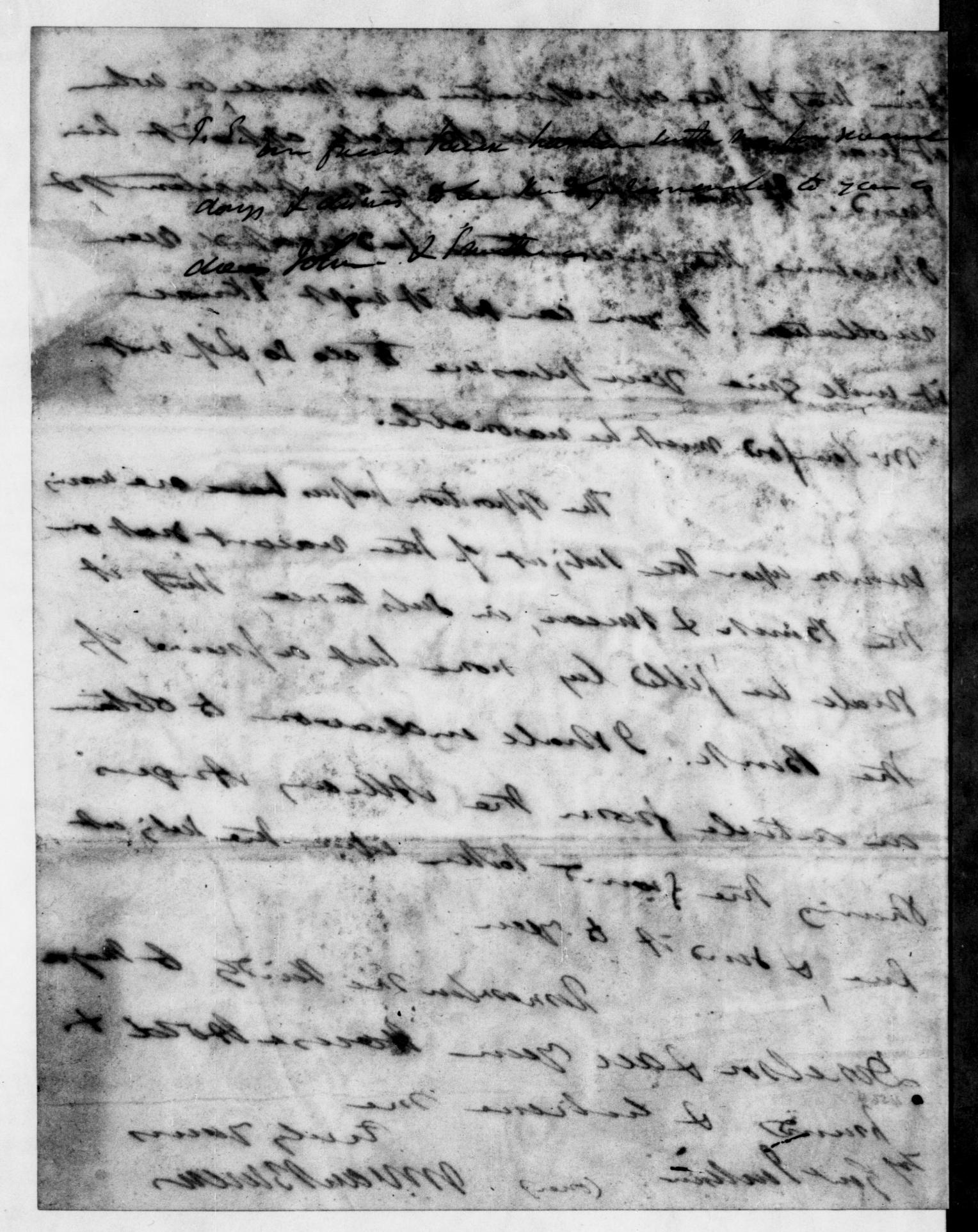 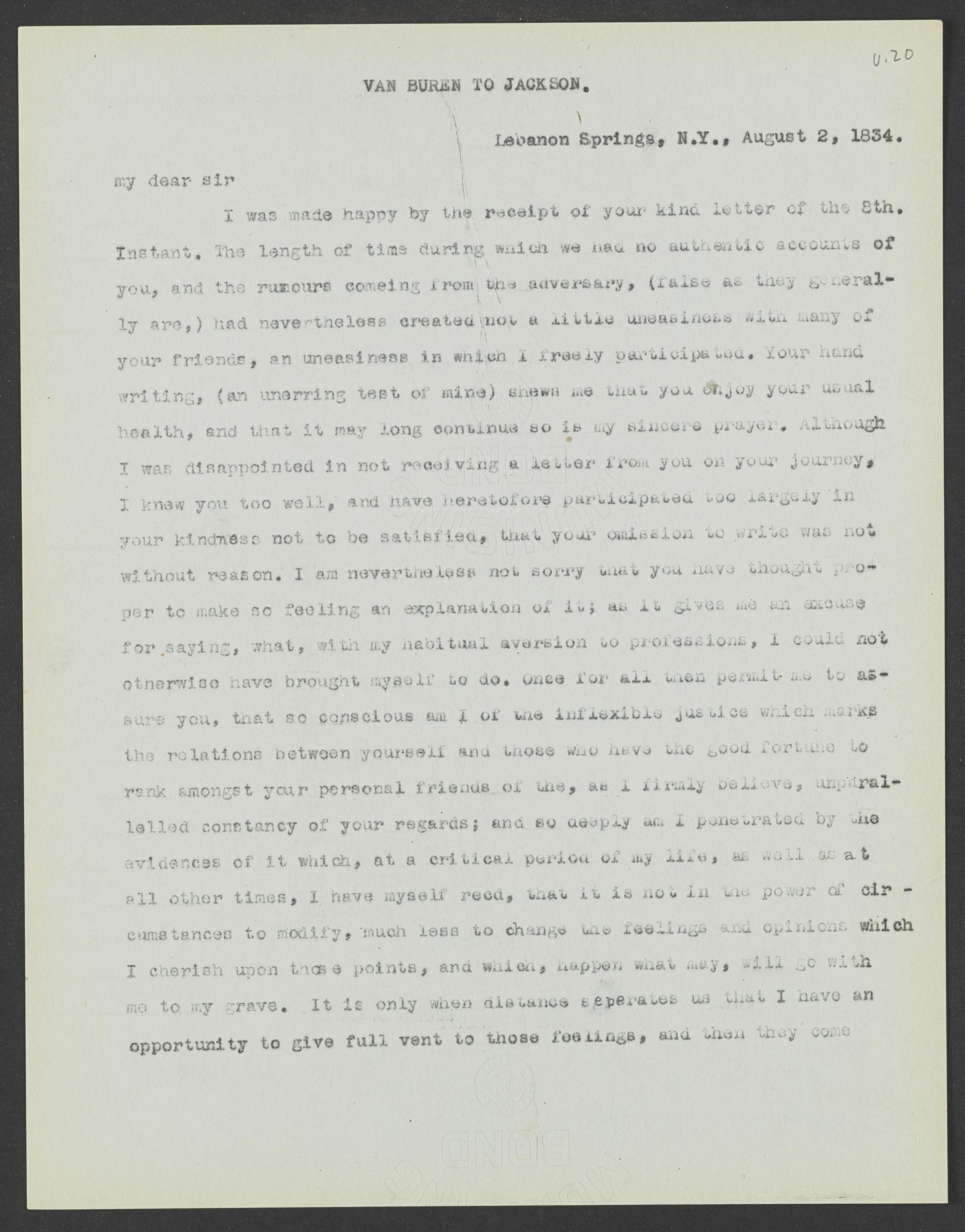 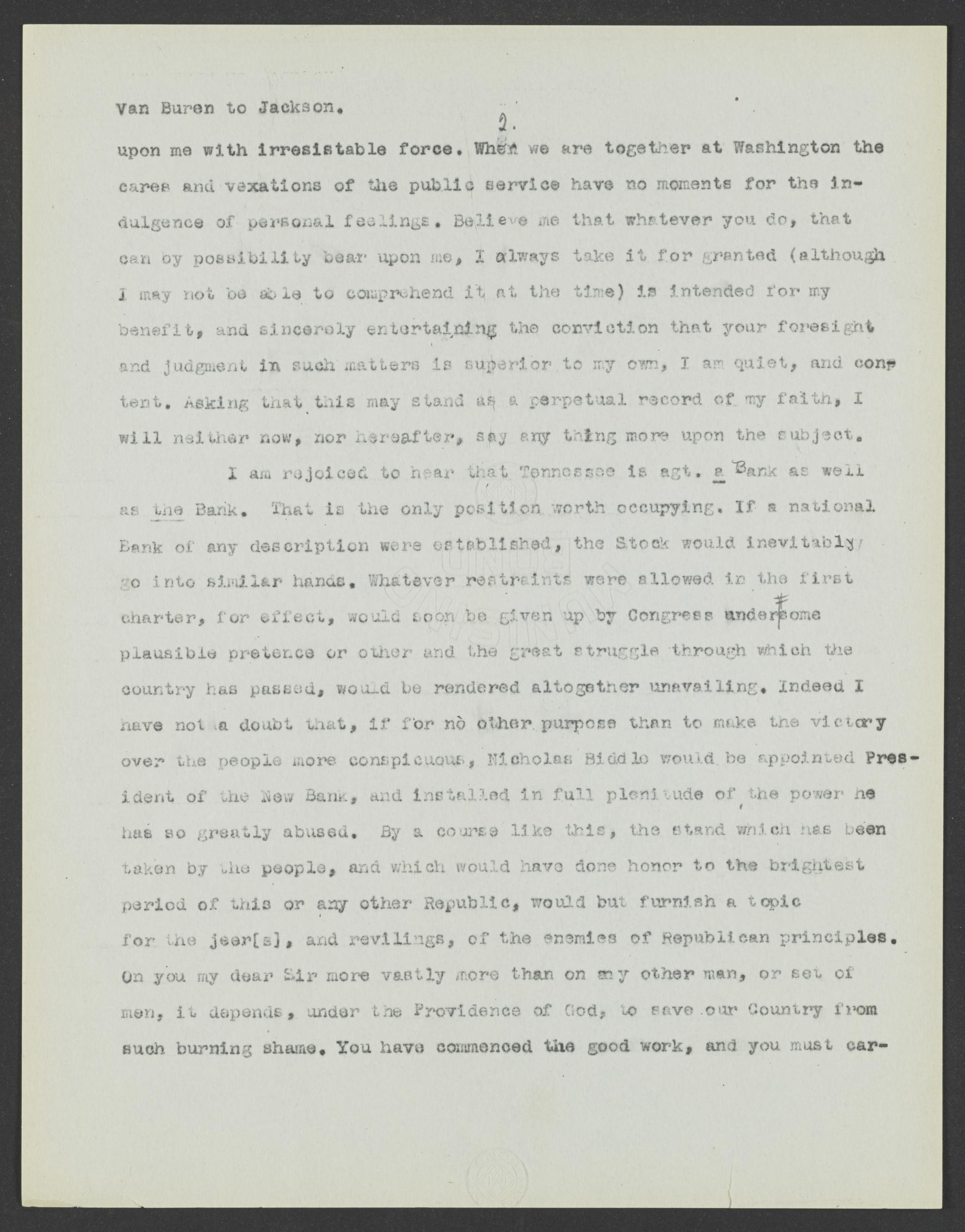 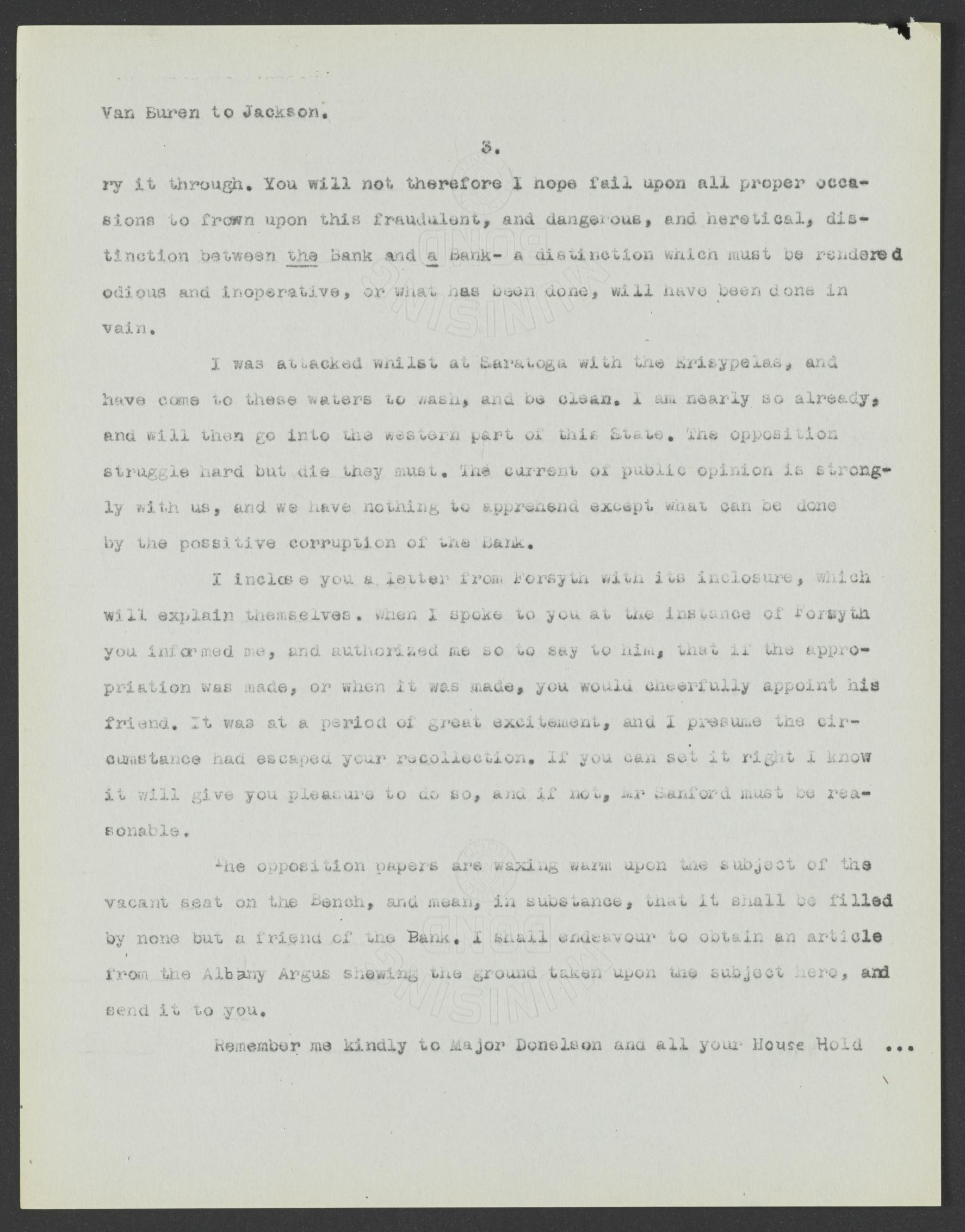