I have had the pleasure to receive your letter of 10th inst., & am glad to hear that it will probably be deemed not necessary to make any application to congress on the subject of the French affair. I take it for granted that the French government has given formal assurances to our’s of their determination to bring the matter again before the chambers; & if that be done in good faith, & with proper earnestness & preparation, there ought not to be a doubt of the result. The opposition to the appropriation was founded on misapprehensions so gross, & on pretexts so shallow, that nothing can be easier ^than^ to explode the sophistries, which were permitted to pass without an answer, & thus made an impression, that the simplest explanation might have removed. You have, doubtless, read the Debates on the occasion, & seen the fallacious but successful arguments founded on a clause of the Treaty of 1819 with Spain, (which, it was contended, covered a large portion of the claims provided for by the French Treaty,), on the alleged transfer of the claims into the hands of speculators at a very reduced price, on the large commercial profits which fell to the share of the United States in consequence of their neutrality in the wars of Europe, &c. &c. &c. All this nonsense, mixed up with false facts, was permitted to pass without notice or contradiction from the other side, & being uttered with great boldness & confidence, made very naturally, no small impression.

I have seen, with disgust, the game playing by the opposition here on this subject, & will endeavour to furnish some materials for counteracting it thro’ the channels suggested by you. But really the “multiplying villainies” of a corrupt & factious Press are so endless, shooting up into fresh forms of slander as soon as older ones have been refuted, that it seems to be a vain, as well as heartless task, to attempt to follow it up thro’ it’s ever-varying images of calumny & misrepresentation. You probably saw an Editorial article, touching some of the topics of this controversy, in the Globe of the 4th inst. I furnished the matter of it to Mr. Blair as an answer to a very calumnious & abusive paragraph he sent me, taken from the Boston mercantile Journal.

I am sorry to learn that, after the manner of the party-coloured Whigs, divisions & jealousies had arisen among our friends also. I had hoped that our cause was so good & great a one, that, in devotion to it, all personal feelings & motives would be freely sacrificed on the altar of the country. I yet trust it will be so.

There have been no particular developments of public sentiment in any of our counties, since the election. It is, however, well understood that several of the counties, which returned opposition members, are, nevertheless, friendly to the administration. If these counties should, as has been suggested to be probable, instruct their representatives before the meeting of the Legislature, the election of Senator may yet be carried in favour of the administration. The present state of our markets, (affording good prices for our agricultural products, & contradicting the alarming predictions of universal ruin, with which the public mind was agitated at the period of the elections), is favourable to a return from the delusions, by which many honest men were carried away. It is a mistake, (most probably encouraged by persons who desire to put me entirely out of view for the Senate), that I am to run for the H. of R., in this District. Some of my friends, it is true, have said that if I am not elected to the Senate, (a contingency admitted to be doubtful, tho’ not absolutely desperate), unwilling to lose altogether the services which, in their partiality, they suppose me capable of rendering, they would wish to send me to the House of Representatives. I have, however, given not the slightest sanction to the idea, & am, in truth, very averse to it; more on account of the disagreeable scenes of electioneering scuffle, this which, with but little appetite for public life. I should have to pass, than from any idea that the station would not be fully good enough for me. With these feelings, nothing will induce me to become a candidate for the District, but an overruling sense of public duty; & from that, I trust, I may be relieved by finding others as able to serve the common cause, with stronger desires to enter an arena, possessing to them the attraction, at least, of novelty. Anxious, however, always to do what is right & proper. I shall be gratified to have your views on the matter, at a time when you may have leisure for so small a consultation.

We are very much pleased at the prospect of a visit from Mrs. Donelson, & hope that the possession of such a hostage will secure us a call from the President & the Major. We only regret that we are not to have the pleasure of your company, at the same time. I enclose a letter for Mrs. Donelson from Mrs. Rives, who will be very much obliged to you to ensure it to be delivered. She desires her best respects to you, & with cordial salutations to all our friends. 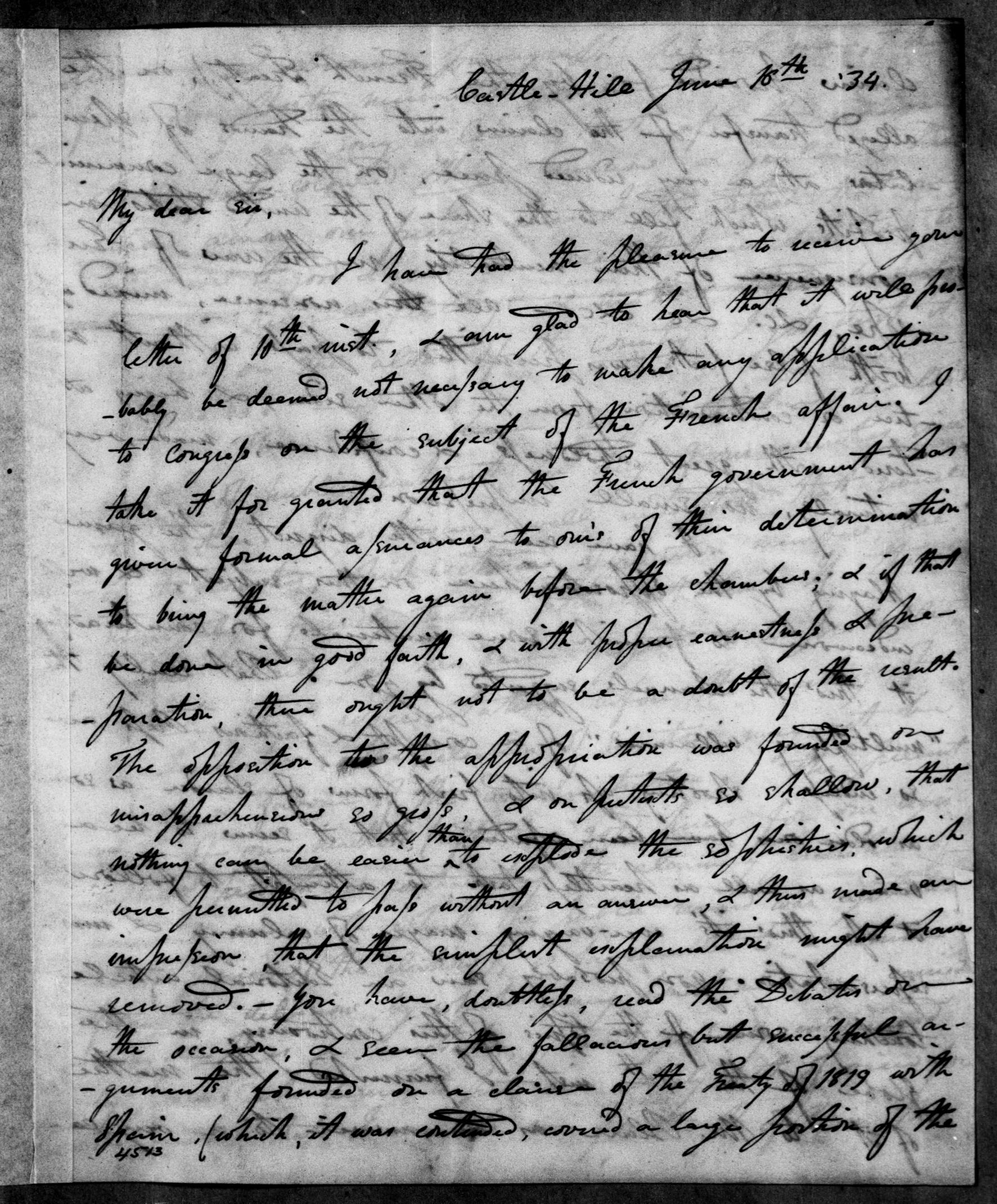 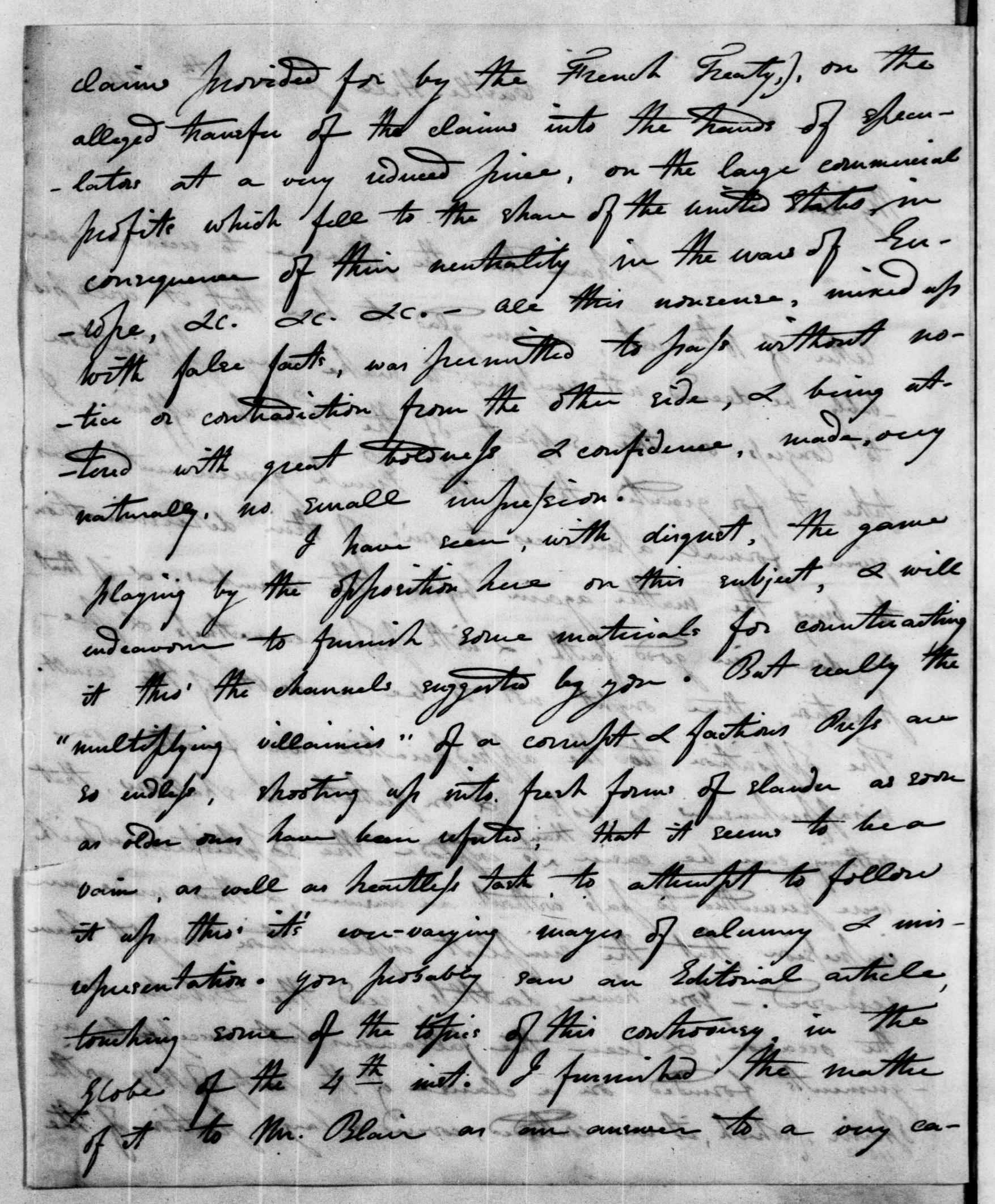 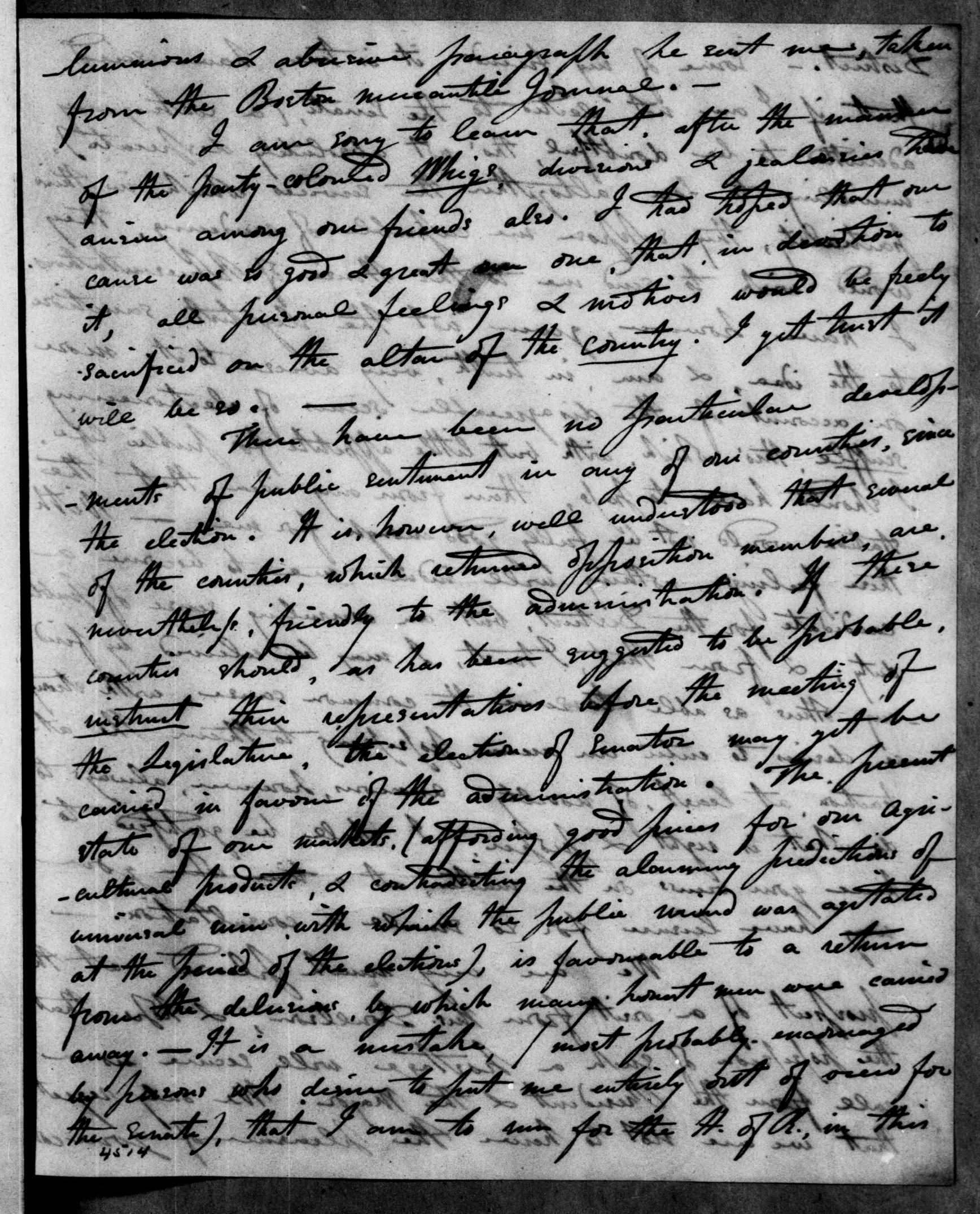 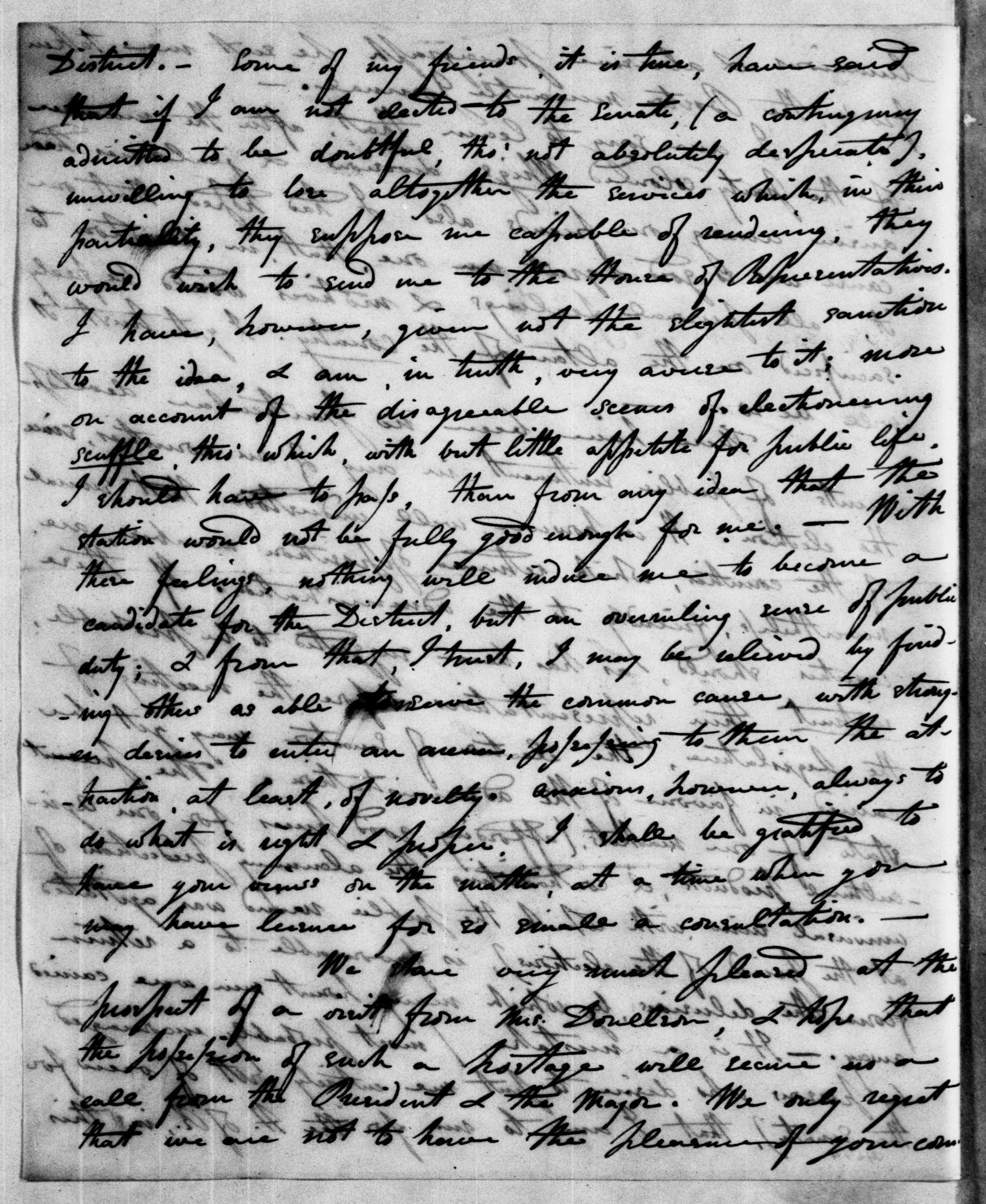 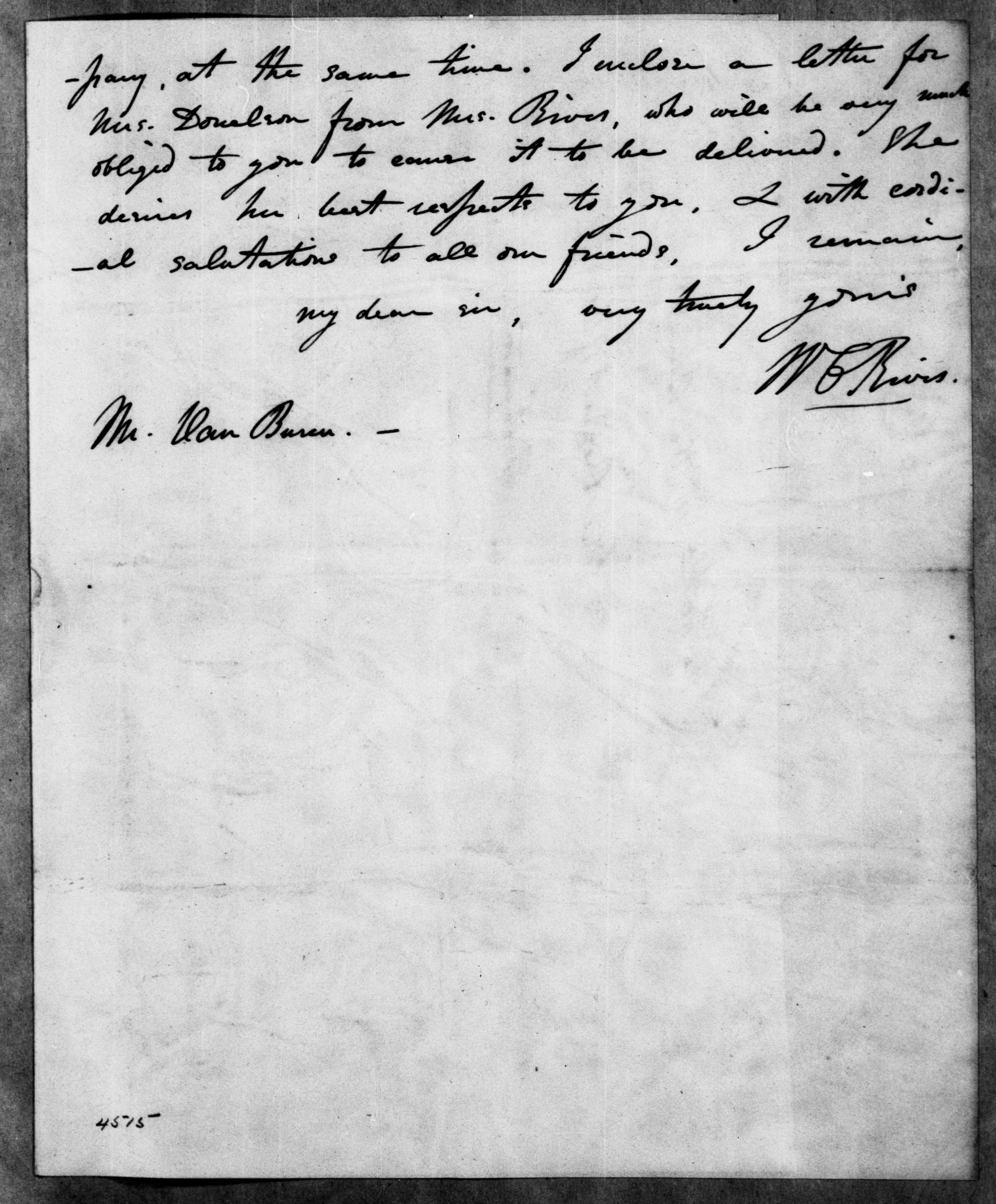 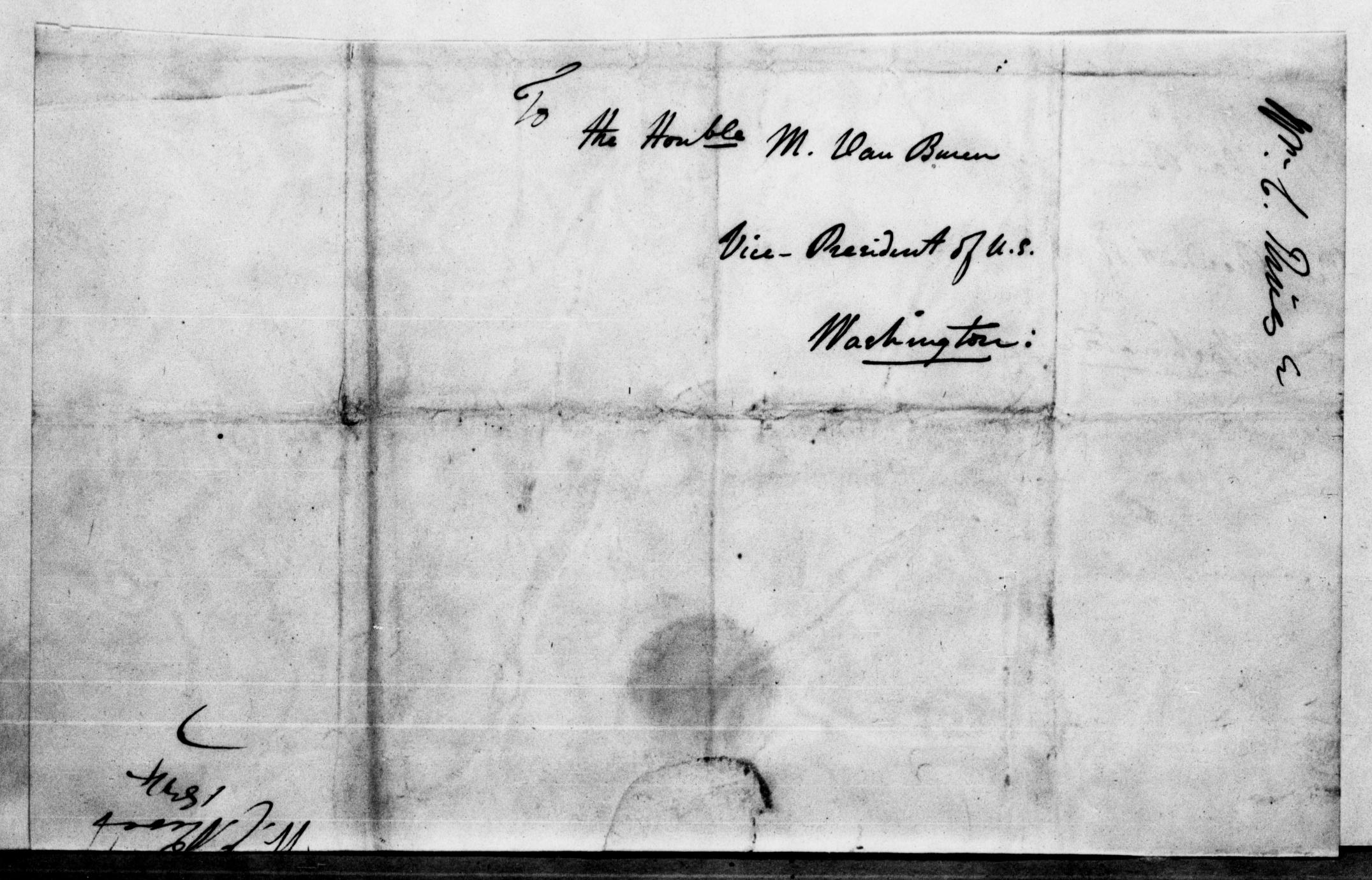