I had the pleasure of receiving your letter of 13th instant, yesterday, & hasten to give you my thoughts on the French affair. You propound the question, whether the President should recommend reprisals now, or, in consideration of the observations & promises of the King & ministers, wait till another trial shall be made with the Chambers. If the suggestion of reprisals be meant in it’s general sense, (to be effected by a seizure or capture of French property as a <fund> of indemnity to the american claimants), I should be certainly against such a measure at this time, tho' I am aware that, according to the established Law of nations, it would be a legitimate remedy. I think, however, that something should be done, to mark the sense entertained by our government of the conduct of the French Legislature, & to act sensibly on the interests of their commerce. What I would suggest would be the imposition of heavy duties on the principal productions of their industry, particularly their silks, which are now duty-free. For many years past, our Tariff has made a discrimination between French & other European silks on the one hand, & silks coming from beyond the Cape of Good Hope, on the other, & in favour of the former. French & other European silks, were, till the act of July 1832, subject to a duty of 20 per cent, while asiatic silks were subject to 30 per cent. That act reduced the scale of duties, on asiatic silks to 10 per cent, & on French & other European silks to 5 per cent; & finally, the compromise act of March 1833 made the French & other European silks duty-free, the asiatic silks remaining subject to the duty of 10 per cent. to be progressively reduced according to the scale. During the existence of the former discriminations, the merchants, in several instances, petitioned Congress to pass a law for equalizing the duties on all descriptions of silk. This proposition, alone, alarmed the French government for the interests of their silk trade, as I had occasion to perceive very plainly in the use I made, while minister in Paris, of a memorial presented by the Philadelphia merchants to congress in Jany 1830, which you will see referred to in my Despatch of May 20th 1830. The imposition of a new & considerable duty on this most important branch of their manufactures could not fail to touch their interests, in a very sensible part, & would quickly stimulate the chamber of Deputies, I think, to provide, with good faith, for the fulfilment of their national engagements. The French commerce with this country in silks is probably not short, at this time, of 50 millions of francs ^annually,^ & it involves the subsistence & tranquility of the second city of the Kingdom, (Lyons), already sufficiently disposed to commotion & revolt. By including other considerable productions of French industry in the proposed imposition of new duties, the effect would be proportionally enhanced, & bring the discontents of the manufacturing interests to act upon the Chamber of Deputies with an impetus it could not resist. The details of such a measure must, of course, depend on data to be obtained by a due regard to, & consultation with, the commercial interests of our own country; but, in regard to silks, I should think the re-action upon ourselves would be comparatively slight, seeing that an ample source of supply would be presented in our commerce with England, & especially that with India, which are merchants heretofore have desired to see more favored. In relation to French wines, I would not touch them, as they are under the protection of the Treaty; & the fundamental principle of our proceedings ought to be, I think, that we consider that a valid & consummated contract, which we mean scrupulously to fulfill, ourselves, & to demand its’ performance, as faithfully, by the other party.

The proposed new duties would be contingent, of course, on the execution of the Treaty by France. But a question might arise as to the form in which they should be made contingent, whether by a prospective imposition to take effect on a given further day, if, by that time, the French government shall not ^have^ made the necessary provision for the fulfilment of the Treaty, or by an immediate operation of the new duties, to cease, however, whenever such provision shall be made. The latter form I should prefer, as affording more unequivocal evidence of our being in earnest, at the same time that it would be less susceptible of the character of menace, to which la grande nation is, as you know, very sensitive. I think it is absolutely necessary, both in the interest of peace & our own honour, that something should be done to close this controversy with France, as speedily as possible. The refusal of the chamber of Deputies to provide for the execution of the Treaty is, under the circumstances of the case, an inexcusable violation of the plighted faith of the nation. They cannot, therefore, complain of our taking measures, with a view to <produce> a redress of the wrong. The measure proposed, while milder than reprisals, will be more effectual for the attainment of justice, & at the same time, is unattended with the danger of war, which reprisals could hardly fail to lead to. The King, who, I am persuaded, is entirely sincere in his dispositions & endeavours to effect a settlement of the difficulty, ought to be glad to find himself aided by a direct & lawful appeal, on our part, to the interests of France, which will arouse the Deputies to a sense of their duty. The diplomatic remonstrances of our government, or the expectations of their own, will hardly be heeded by them, unless backed by practical proof that we are in earnest, & that we have both the power & the will to visit their manufactures & commerce with the consequences of their bad faith. I do not believe, however, that the conduct of the chamber of Deputies is attributable altogether to deliberate bad faith. It is, in part, the result of a mistake, (which has been too much countenanced by ministers), of their <true> constitutional functions. Many of them think that the chambers, in deliberating on the execution of a Treaty, have a perfect & unlimited discretion to pronounce on the expediency of its’ stipulations, & to grant or withhold funds for their execution, according to that consideration alone. In short, they consider themselves to stand to the treaty-making power in the relation of our Senate; & it is not uncommon for them, both in their diplomatic & parliamentary discussions, to speak of the ratification of a Treaty by the chambers, when they are only called on to provide for its’ execution, in matters committed to the Legislative Department.

These suggestions, my dear sir, in compliance with your request, are submitted to your better judgment, intended for yourself alone, & subject, of course, to be modified by views & facts, which, for the want of full information respecting the state of the affair, may not have had their proper influence on my mind. That you may have the views of others, as well as myself, on a subject of so much importance, I enclose a letter I received yesterday from Paris, which seems, however, to have been written under the impression that the refusal of the chamber to make the appropriation, put an end to the Treaty. I will thank you to return it, when you shall have read it.

It seems that Mrs. Rives is about to involve you in a negociation with a charming French lady, which will not, I trust, be either as disagreaable or as troublesome as the negotiation with the French government. I enclose her communication for yourself & for Madame S., & remain 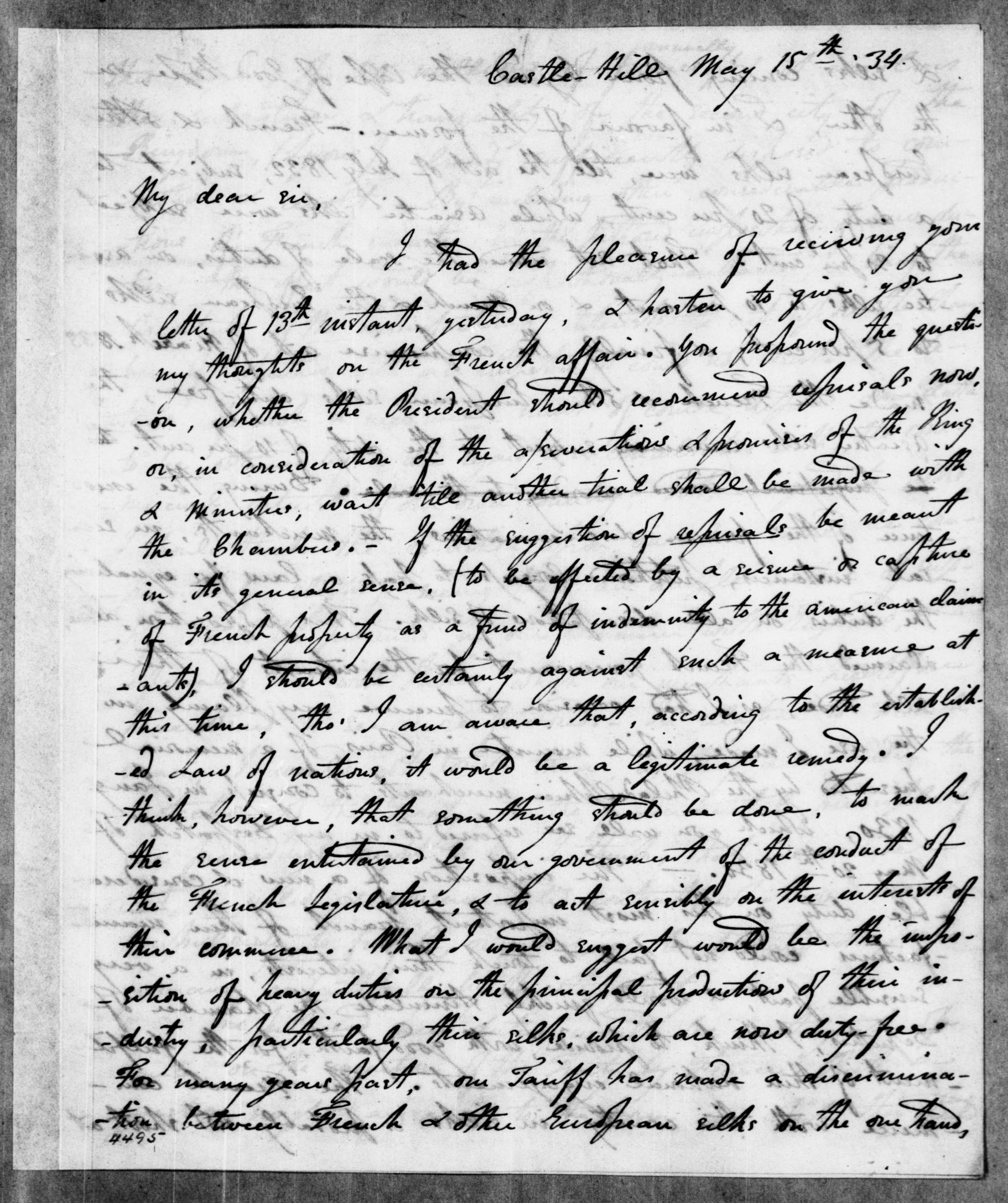 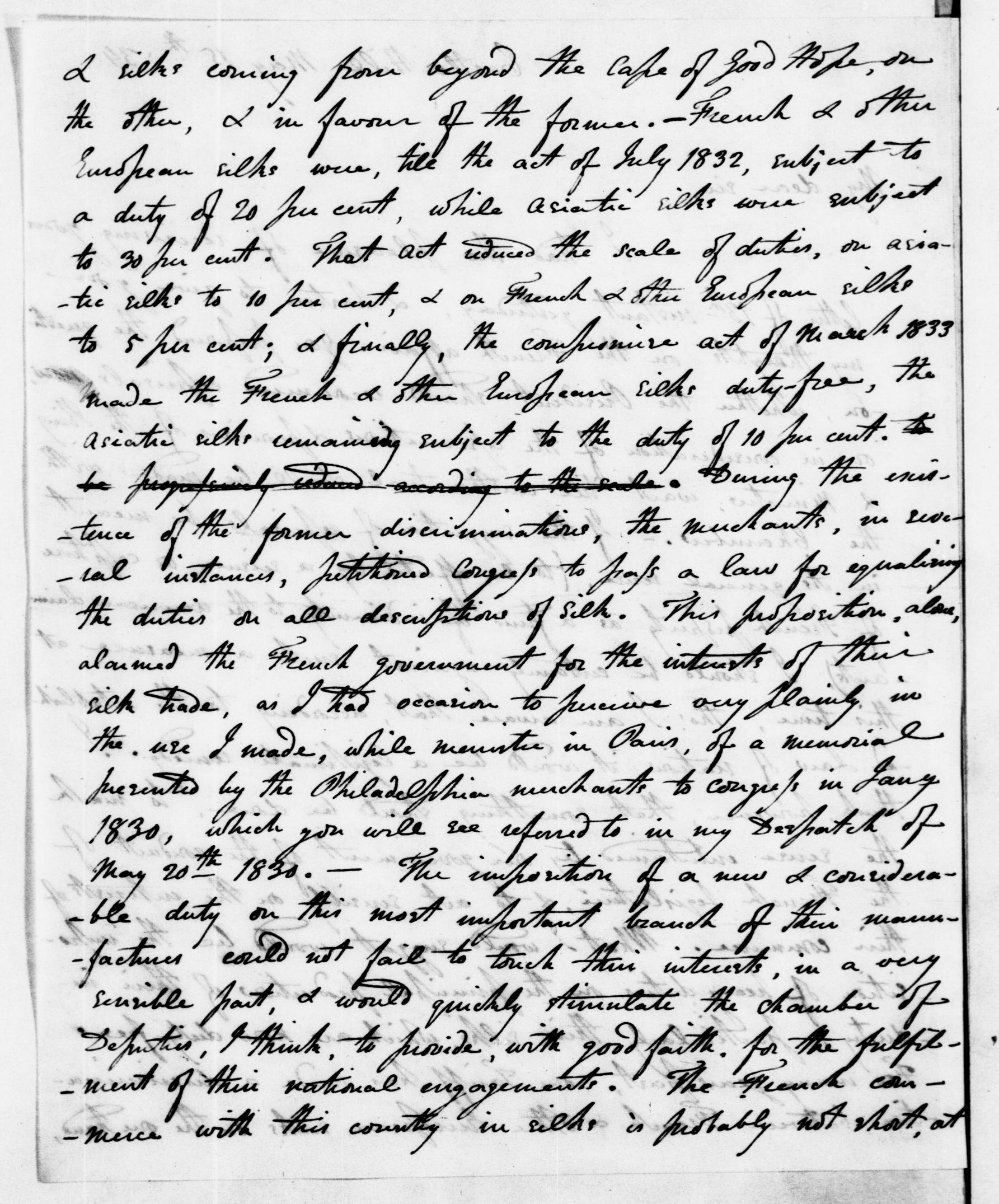 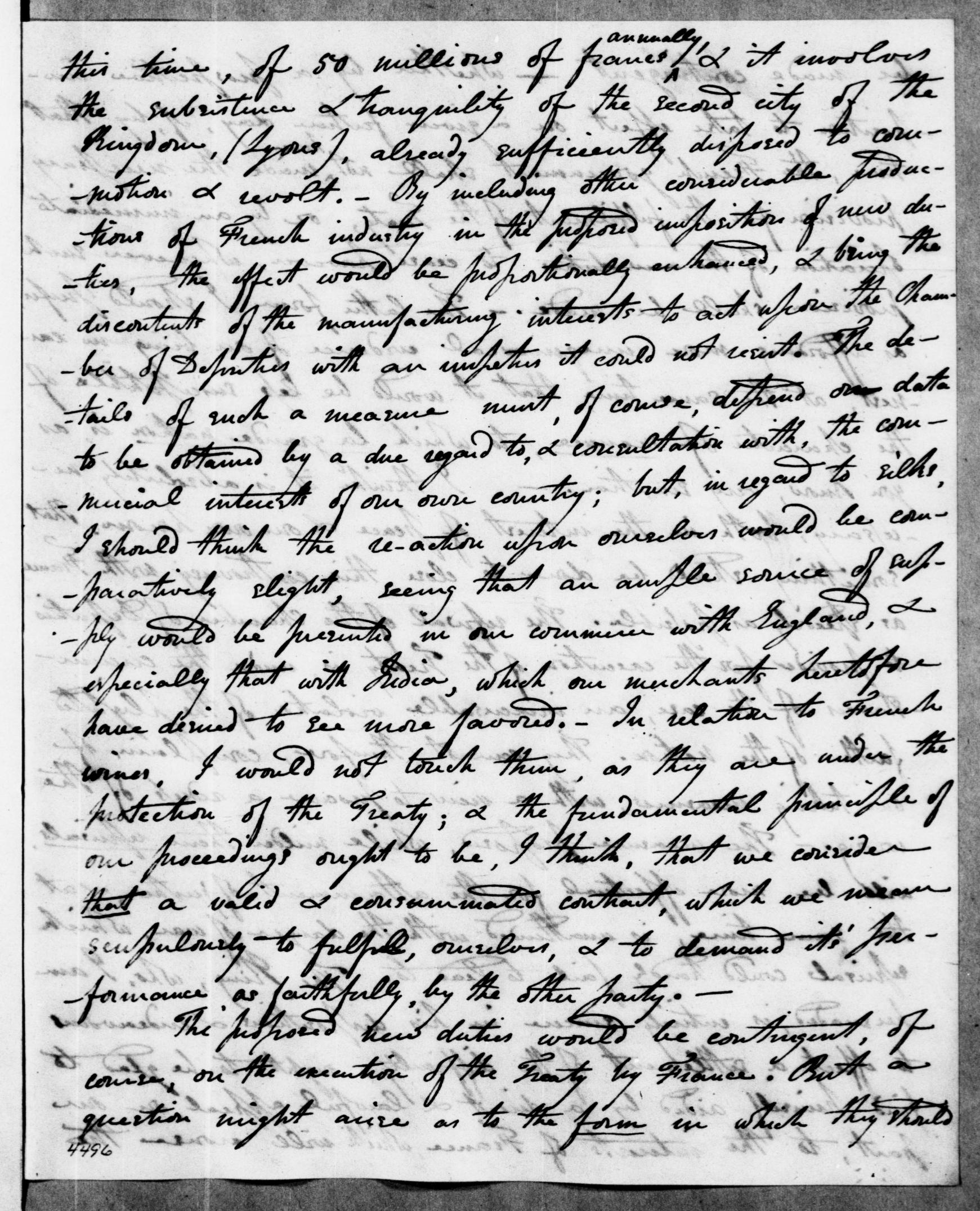 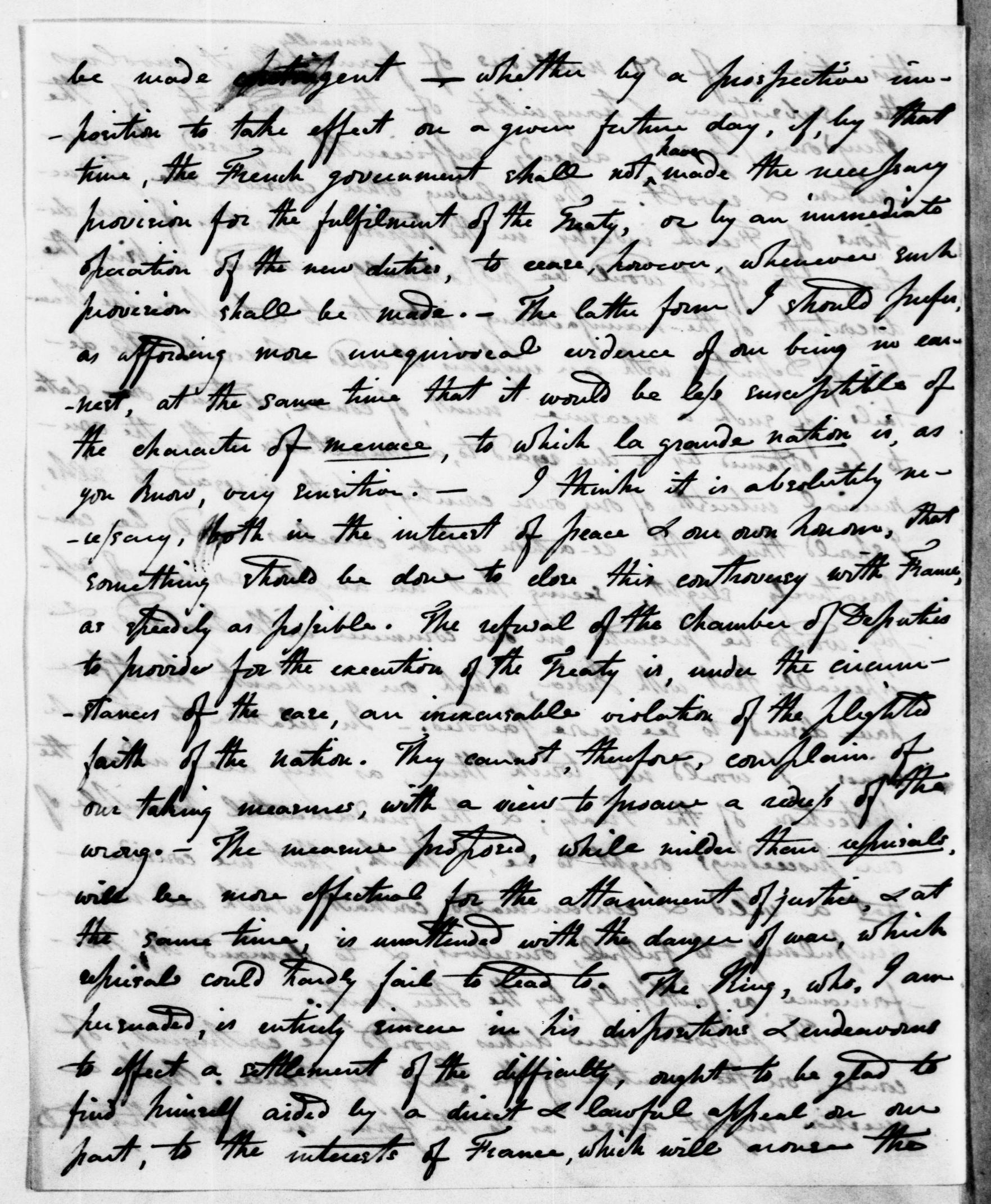 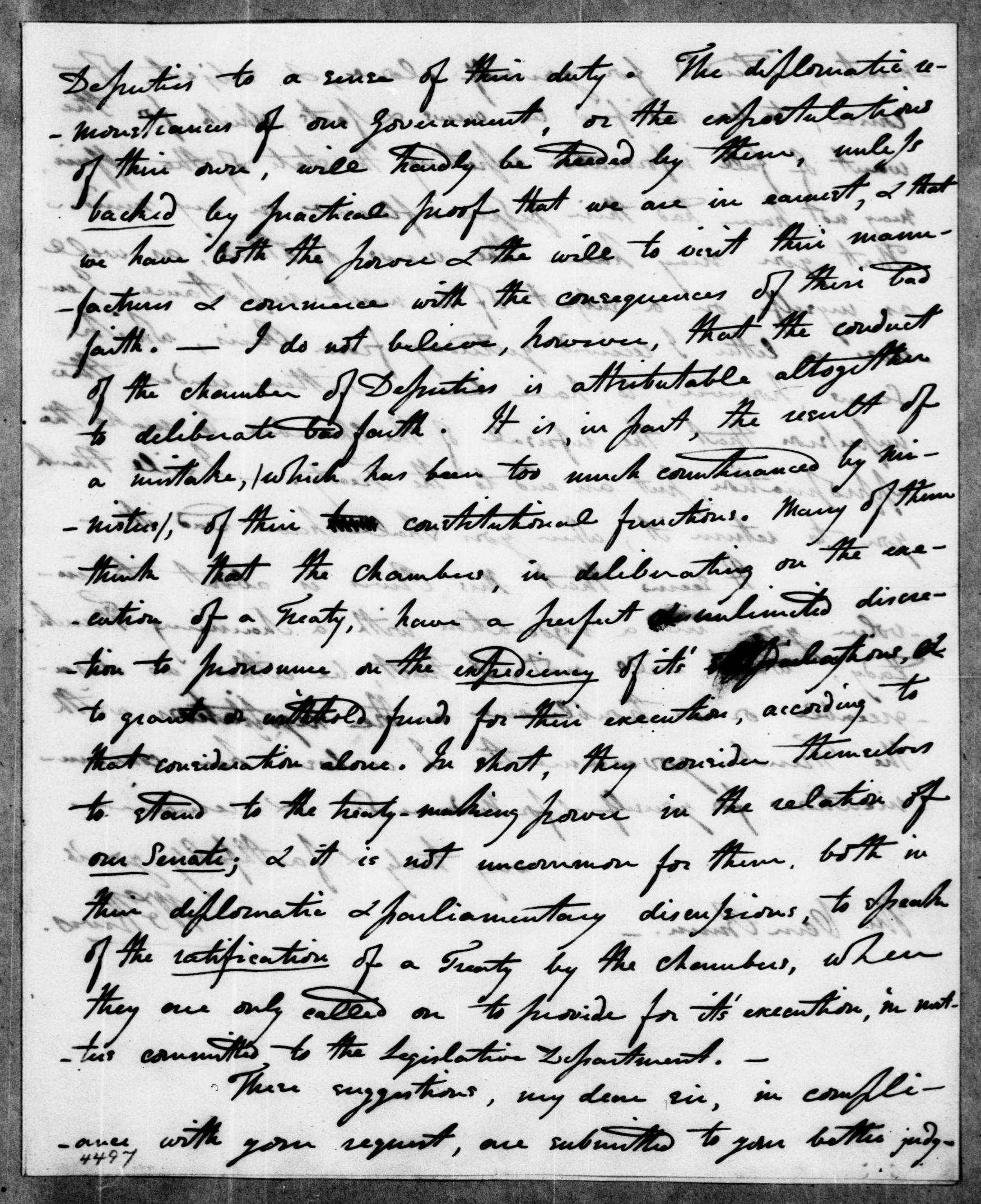