Permit me to claim your attention to a few considerations on the subject of our present situation, and the remedy that might be applied. Be assured that we feel the whole force and power (however latent it may be) of the United States Bank upon this city, its Commercial concerns and Banking interests. And the question is put to all your friends with great earnestness and pertinency, what is to be the remedy?

The rechartering of the United States Bank & the restoration of the deposites are to be considered as questions settled, for if the Administration yield jot or tittle in either point they are ruined irretrievably, nor ought the remedy to come from Washington.

The proposition to be brought before our Assembly in a day or two, as I hope, will afford in my humble opinion, a complete and unquestionable remedy to this State and all its leading interests. That is let the Legislature of this State charter a state Bank in New York for at least Ten Millions of dollars, subject in all respects to our State Laws, the visitation of the Bank Commissioners, State Taxes and contributions to our Safety fund; and that there shall always be in the Vaults four millions of specie.

I am not too sanguine in saying, that from the day the Governor would place his signature to such a charter, public confidence would be restored, and the currency of the country assume its wonted regular channel.

A Bank established according to the plan I propose would have State Directors appointed by the Governor and Senate and the State to have at least One million of its Stock, and State Stock created for the express purpose of a subscription to the Bank fund to be sent to England and sold and returned altogether in Specie. The Interest on the State Stock always to be paid by the Bank out of the State Dividends and to be ultimately redeemed as the State may think most advisable.

I have the most satisfactory evidence, that a Specie capital of Seventeen hundred thousand dollars can be placed in a Bank of that Kind in Sixty days from this time, as orders for about that amount have already been sent to England and France for other purposes.

To return to New York, an institution to be established there such as I have hinted at would form a perfect bulwark against any attack to be made against the Banks of this State or its Commercial interests by the United States Bank: and I feel great confidence that the interests of the latter institution would be entirely wound up in this State without producing the least injury to any of our State Banks. On this point, I feel very sanguine, but as we now stand unshielded and unprotected I feel an equal confidence that if the United States Bank was to make a direct movement against our State institutions she could overset the whole concern in Sixty days.

Be assured that I do not write under any influence of the panic that exists in this State. But I have a strong and irrepressible solicitude to see some public security given to the moneyed institutions of this State with promptness, feeling that it not only deeply concerns our banking and moneyed interests, but also the present political character of this State and Country. From my own observation, I am confident, that under the present feverish state of excitement, that exists it will be impossible to Keep any political party together: the impression, however fallacious has gone abroad, and is winding its way into all corners of the country, that our present pecuniary troubles arise from the removal of the deposites from the United States Bank: and it will certainly, affect very essentially the result of the next fall Elections.

However patriotically individuals may occasionally declaim to the contrary, yet it will always be found, that if men's pecuniary interests are vitally affected and they believe whether fallaciously or otherwise that it results from the course of an Administration, you cannot possibly retain their votes.

One word more on the same subject, and that is an expression of regret & of deep regret, that my friend Mr. Wright should have seriously stated in the Senate of the United States, that a system might be introduced by which a Metallic Currency only would be used. I can assure you, my dear sir, that there has not been a sentiment uttered in our State or National Legislatures, that has created a more deep, yet silent alarm: and for this opinion, I have the authority of one of the Bank Commissioners, who is now in this City superadded to my own observation. 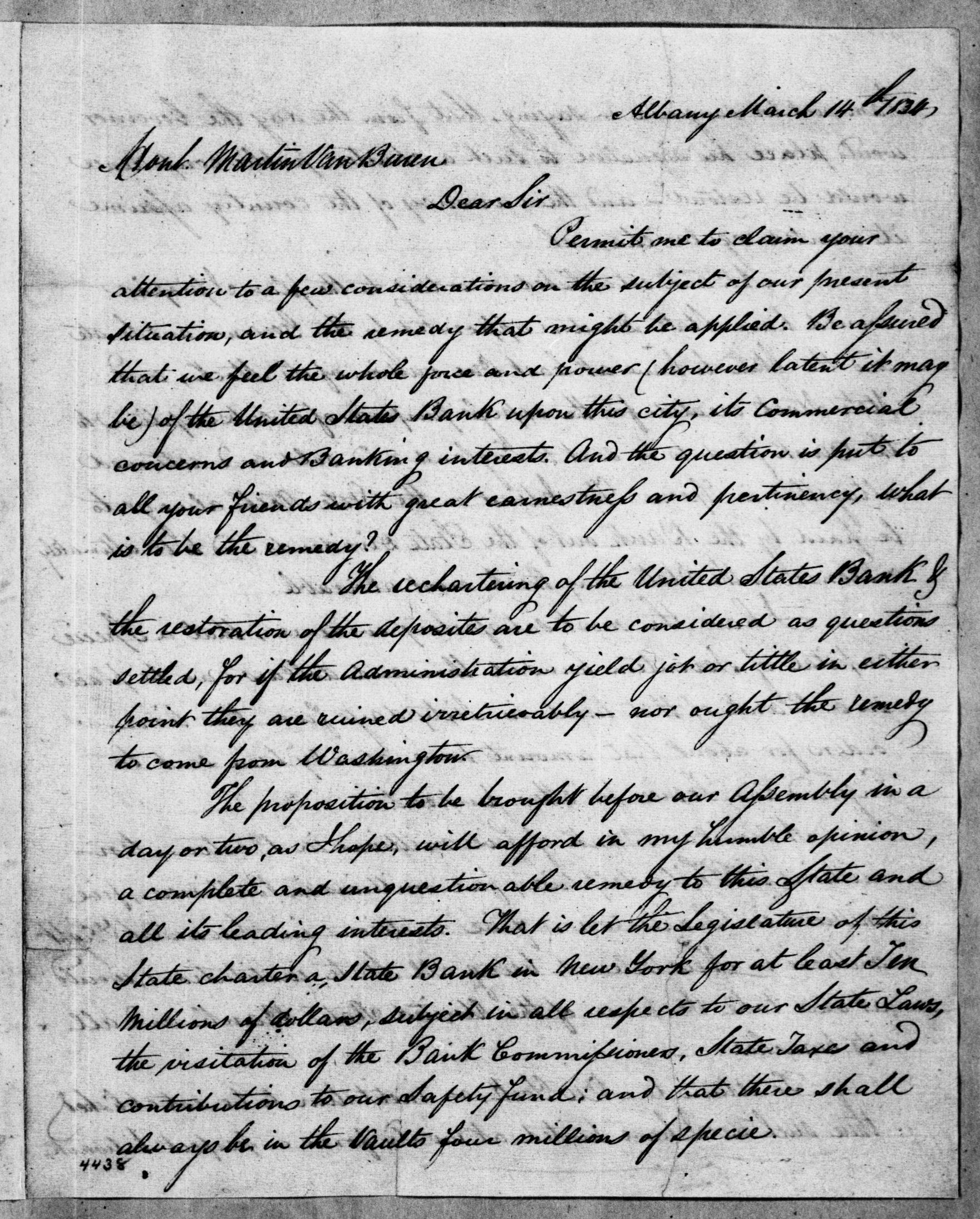 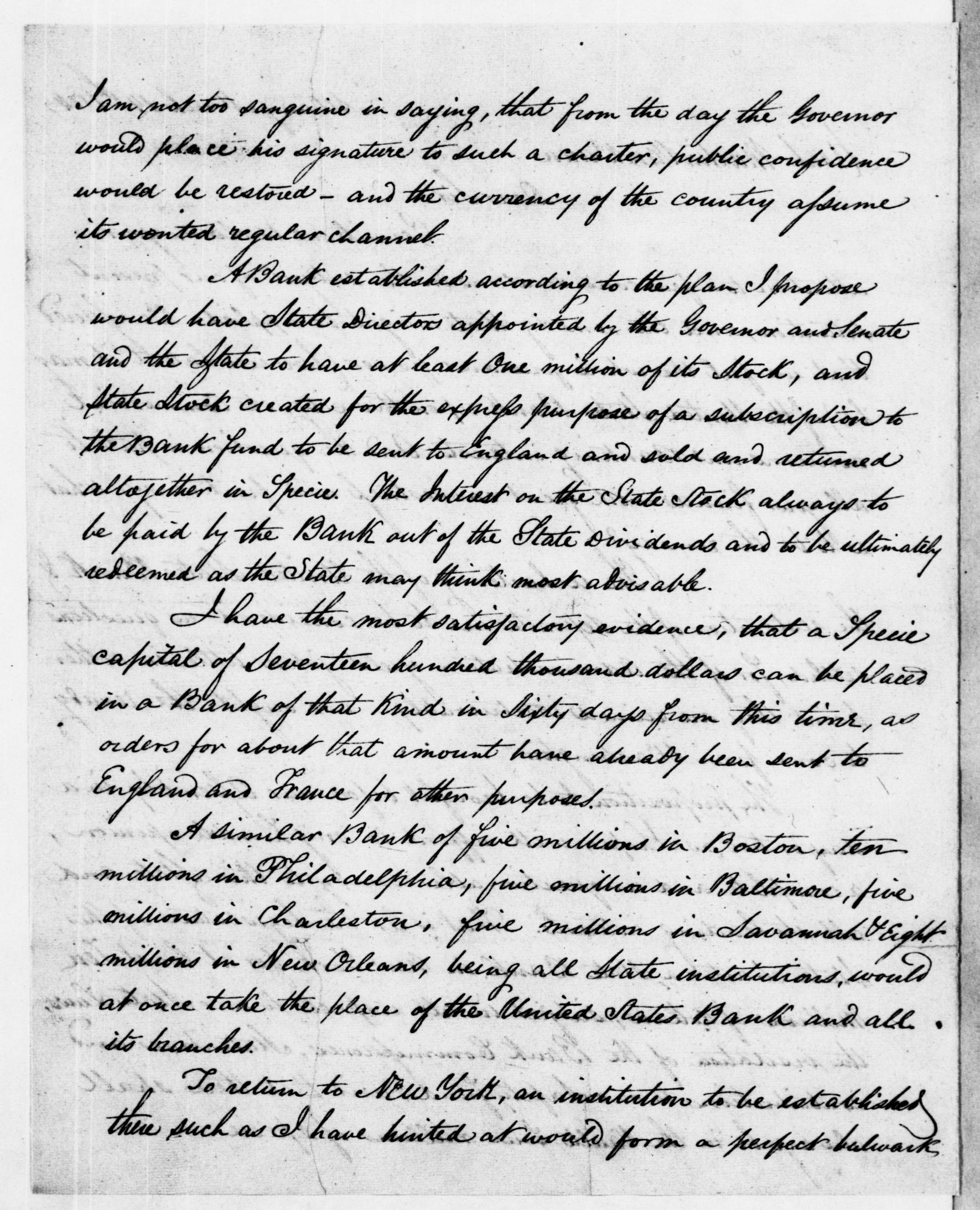 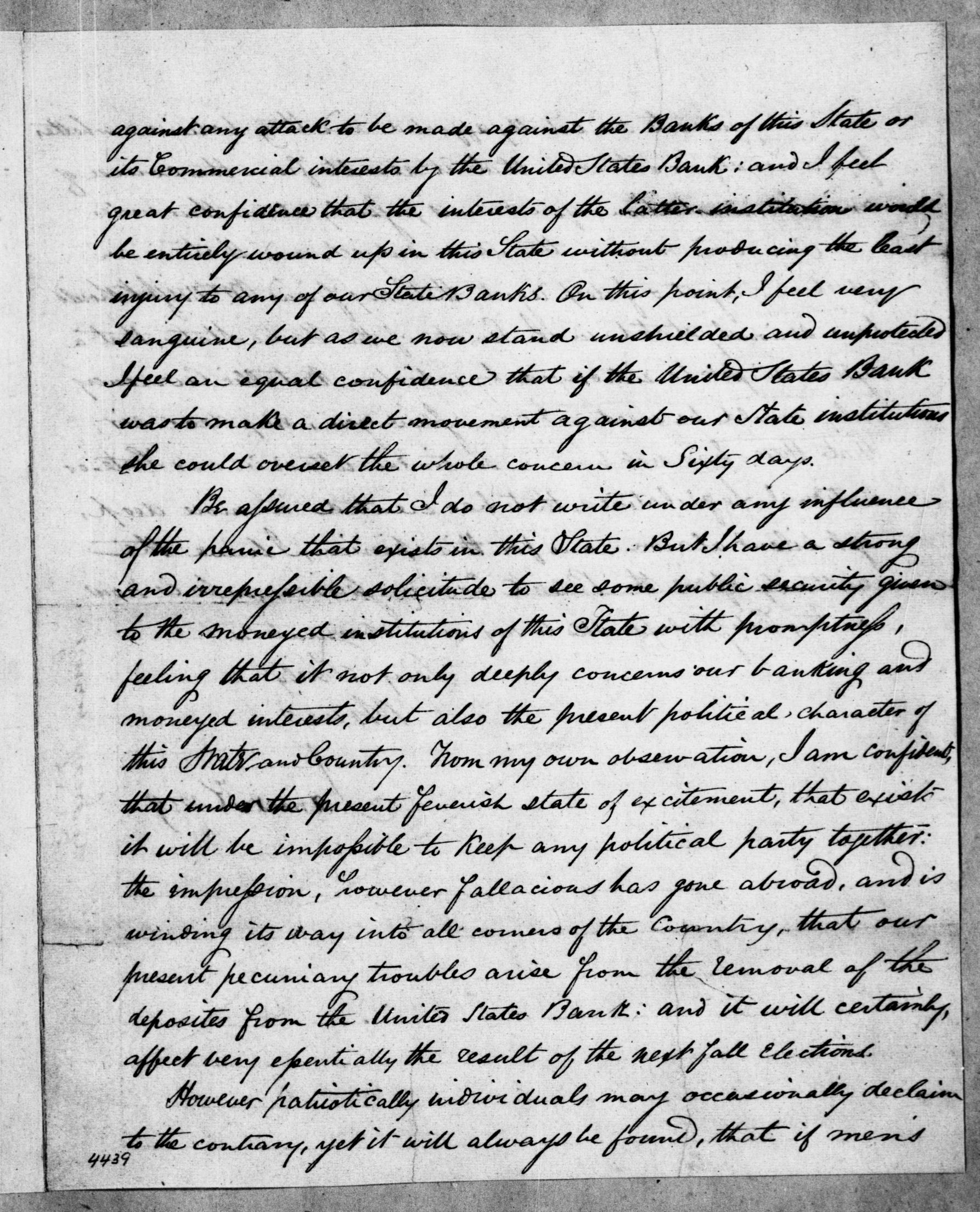 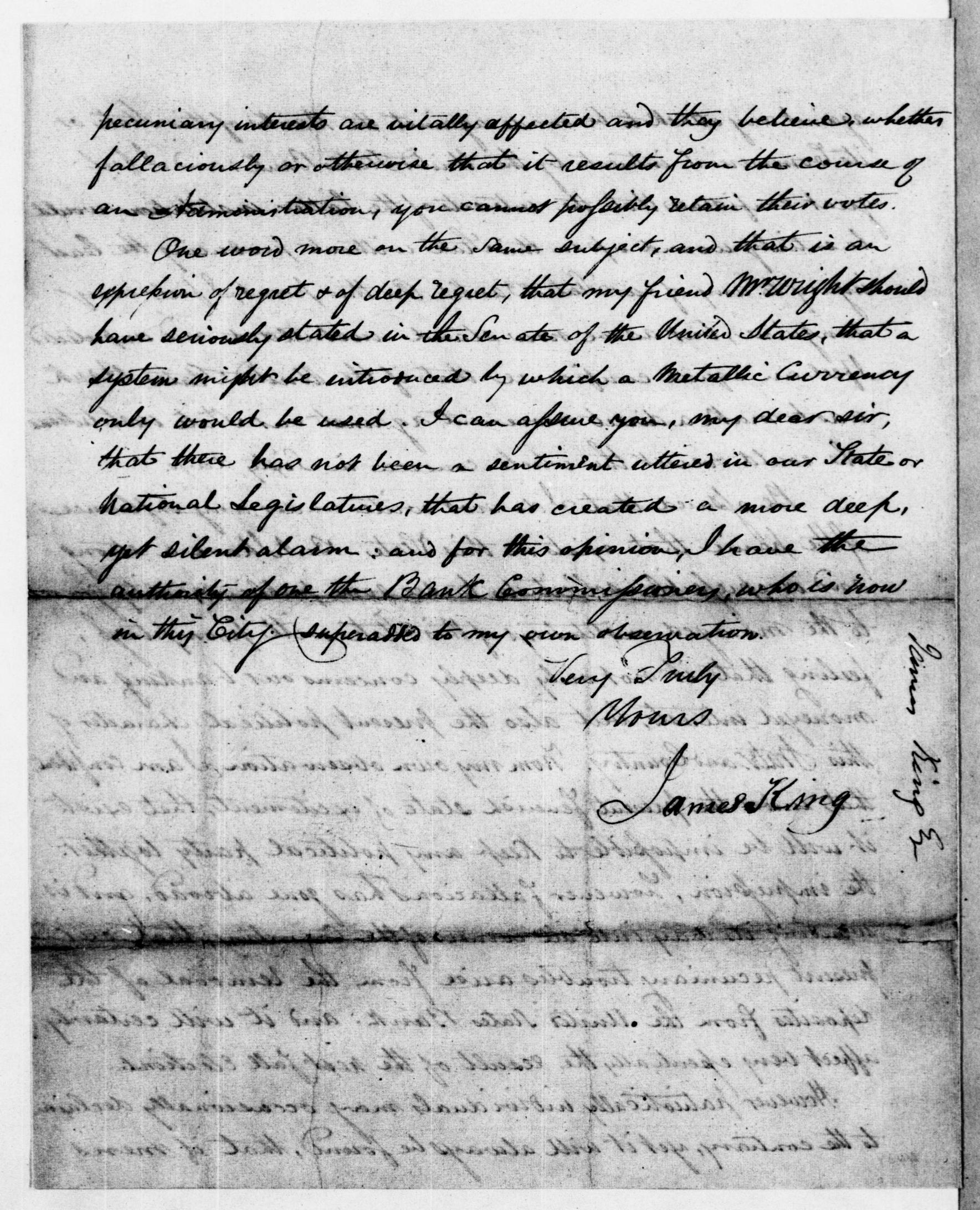