The political accounts from New York are favourable to day. The best calculators say that Tammany will carry Eight wards. I do not pretend to form an opinion

Commercial & monied affairs there, are in a most distressing condition, and as the Country pays nothing must become worse. The Traders and large mechanics are kept up principally by renewals of their paper. I have done so much towards assisting many of my old friends that if I do not loan more than $20.000 I shall be content to bear the damage.

I understand that no Bank in the Country discounts any new paper. It is as much as they can do to keep some of their debtors alive renewals of Existing Engagements, and to provide for their circulation. The Banks in this City are unable to move in any direction so as to releive the pressure: having the utmost difficulty in sustaining themselves and such of the Country Banks as are obliged to lean on them. The balances which the Country Banks owe the City Banks continue very large, and are, as I am informed on the increase, since their notes come back from circulation more rapidly than the Country Banks are able to redeem them. There are people who can give you more precise and correct versions of this matter than I can. But I have no doubt that if it could be legally done and by concert of all the Banks together, Specie payments would be suspended within the next 30 days. Such I take to be the agony of mind and the supposed point of the bankers who are obliged to carry the load in this City.

Notwithstanding that the Commissioners have been obliged to procure for the support of the Albany Banks $300.000 from New York, it must be already Entirely Exhausted, because a project is on foot to issue half a million of Stock on acct of the Chenango Canal to be sold in New York for the purpose of raising money to support the Albany and Country Banks. How long it will last remains to be seen. I hope it will suffice all purposes. The opening of the Canals will afford a <illegible> ^important^ assistance. The advertisement for the Loan will appear in a day or two if my observations and inferences are correct.

A failure occurred here to day very similar in one of its characteristics to that of Knower,. It was of regular house. The thing is so fresh that precise details Cannot be given: but it is said they have a surplus of $100.000. If this is true it is Evidence that the Banks have no power or resources.

The project of a 10 Million Bank is a favourite [wi]th, I believe all your friends in New York, and is gaining some ground if I am correctly informed on both houses here.

I think that this or a National Bank should be chartered forthwith. The Capital would be subscribed and paid sooner or later, perhaps in 90 days.

As soon as either should commence operations or the Banks suspend Specie payments failures would diminish and difficulties begin to subside. 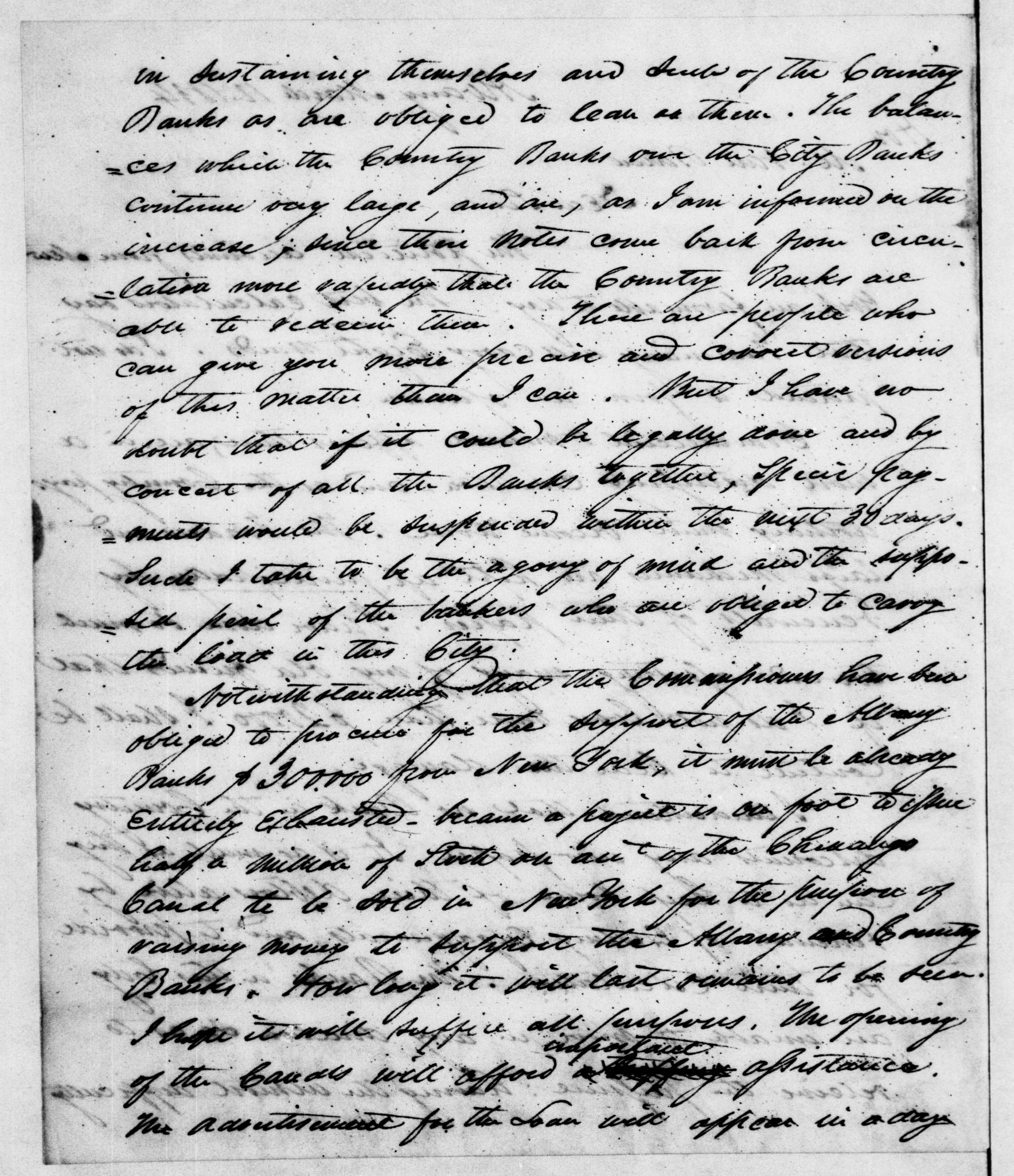 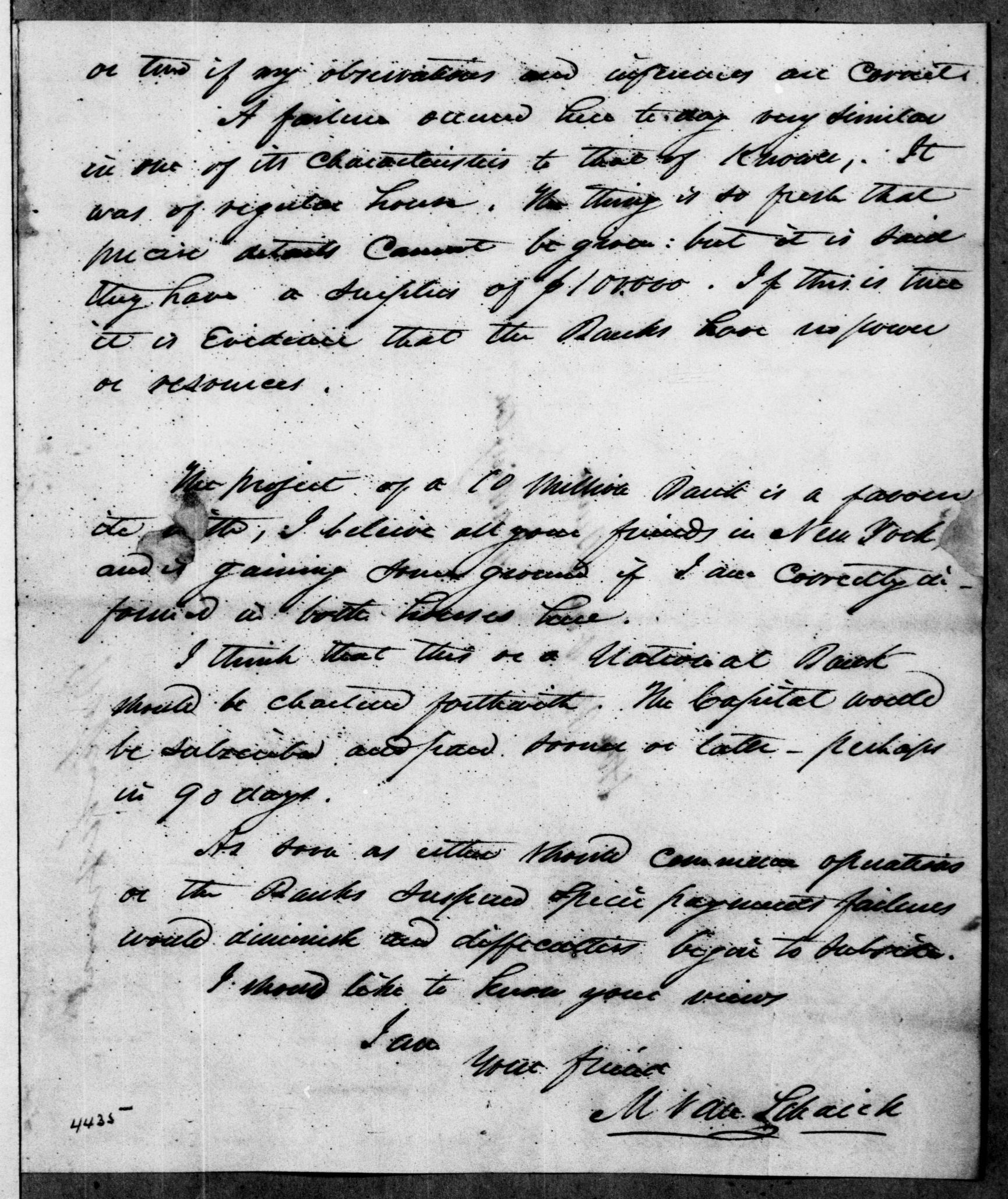 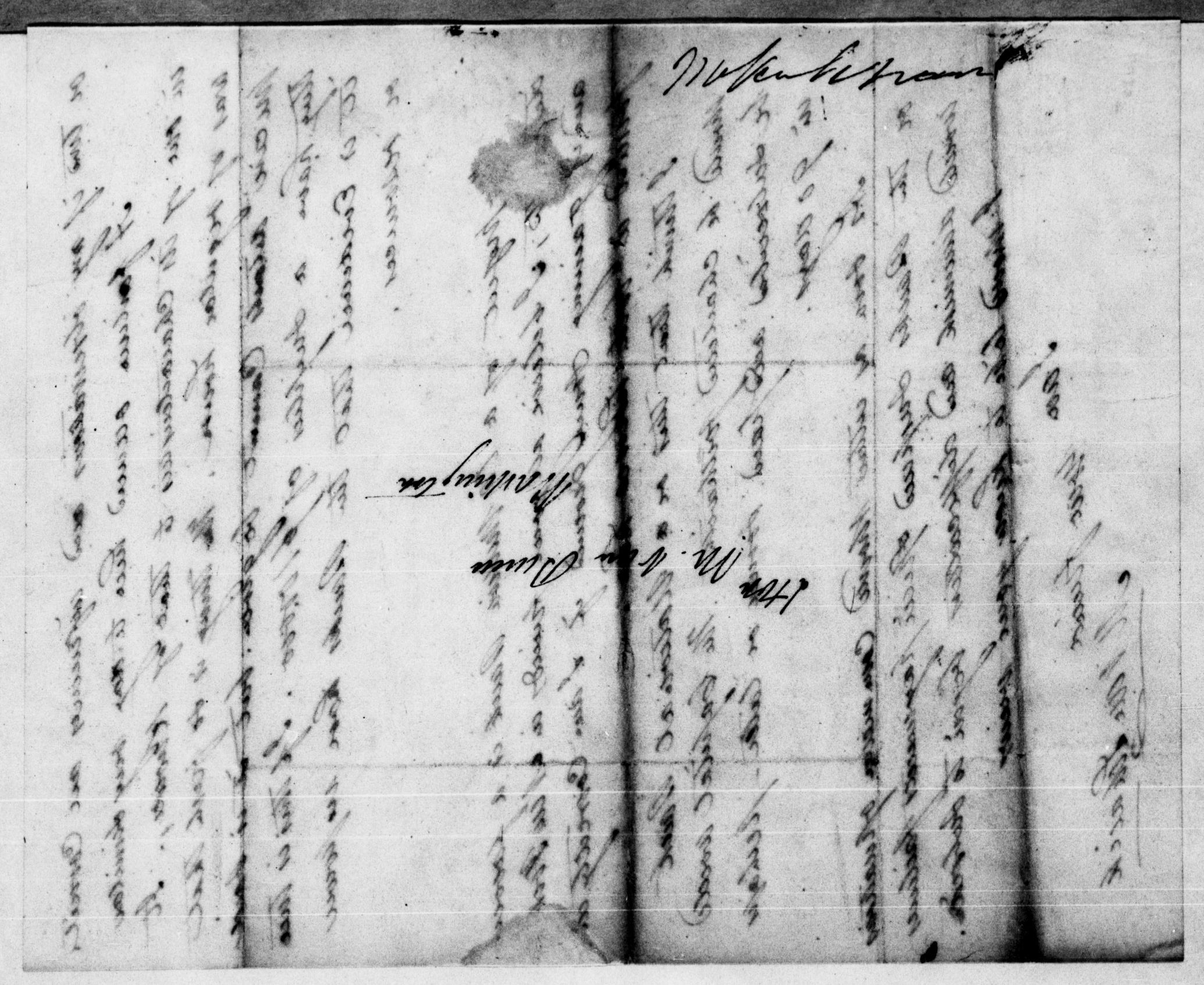