Allow one who duly appreciates your personal and political worth, one who under any circumstances will be found cordially and I may be allowed to say afficiantly ingaged in the field with your best and most zelious friends in the furtherance of your exalted views. With those remarks, allow me to call your serious attention to a subject of vital importance to us all, and especially to its personal bearing. I allude to the present distress of the country. It is not fictitious, it is real, it is deeply felt. It goes home to the farmer, mechanic, manufacturer, to all, from the highest to the lowest. The immortal Jefferson started the project of your Gun Boats, saw their utter uselessness and backed out. He recommended an imbargo: Congress passed the necessary laws. He saw its folly and rewin to his own country and he backed out with a credit that added luster to his fame. The local Banks of the state saw in the Presidents first message to congress an expression unfriendly to the United States Bank. They cast it with avidity; and rallied all their strength in support of that expression, believing that if the U.S.B. was put down, that their paper would have a much more wide and extensive circulation, and they realise a much greater proffit: without ever thinking of the absolute necessity of some great monied institution with power to regulate the economy of the country. When too late they have fully seen and felt their folly. The country is made to feel at every <illegible>. That section of our state which has been under the dominion of antimasonry for a number of years till her emancipation last fall will again rally: not under antimasonry but under a new name and against the power which they will be made to believe is the cause of all their trouble The present low price of wheat in that region will all be <charged> to that quarter the same source. The entire tier of southern counties are in danger of going by a large majority against us Tho we have a great deal of sterling <illegible> in that quarter of the state. They have not been made to feel much yet, but when they start their lumber and produce, and it shall have arrived at their accustomed markets where no <illegible> sattisfactory price will be afforded for it in cash. Dismay and ruin will stare them in the face They will loose sight of individual names, and turn to the ballot box in the hope that a Change will better their condition. There is time plenty yet to put this matter right, and save all. The great commertial interests of the country United States require a Bank and the people will never will be sattisfied with any thing short of a U. S. B. What can a ^Bank do with a^ 1/2 million or a million ^of Dols.^ in regulating the currency or what reliance could be placed on a Thousand independent local Banks scattered over the united states (each having a capital equal to the meeting their local wants) [. . .] the regulating the currency: nothing. There is no danger to be apprehended from a U.S.B provided the charter be propperly garded. Allow me to suggest a plan which <illegible> taken with the people for a Bank. Capital 45.000000 one third of the stock owned by the U.S. The remainder divide among the states according to their representation in Congress The share of each state divide amoung the counties according to their population and to be by them subscribed if the cities of each ^the respective^ counties should so wish to do. At least one Branch should be located in each state and in no State more than two. Let the mother Bank be located in Philadelphia, that would sattisfy the citizens of Penna. The President to nominate and the senate appoint a number of Directors equal to the share of the stock owned by the United States as well for the mother Bank as for each one of the Branches.

[Y]ou cannot know at present who has [. . .] enclosed the above scrawl to you. I have no one to help [. . .] a secret consequently no one to tell a tale, but I have kep[t] a copy which I will show to you some day which will prove that I am none other than a sincere friend to the President and to your self. When I produce that you may pronounce me arrogant and too presuming but I am <shure> that you will pardon when I declare the purity of my motives

With sentiments of High consideration

I remain as Ever your obt Sert. 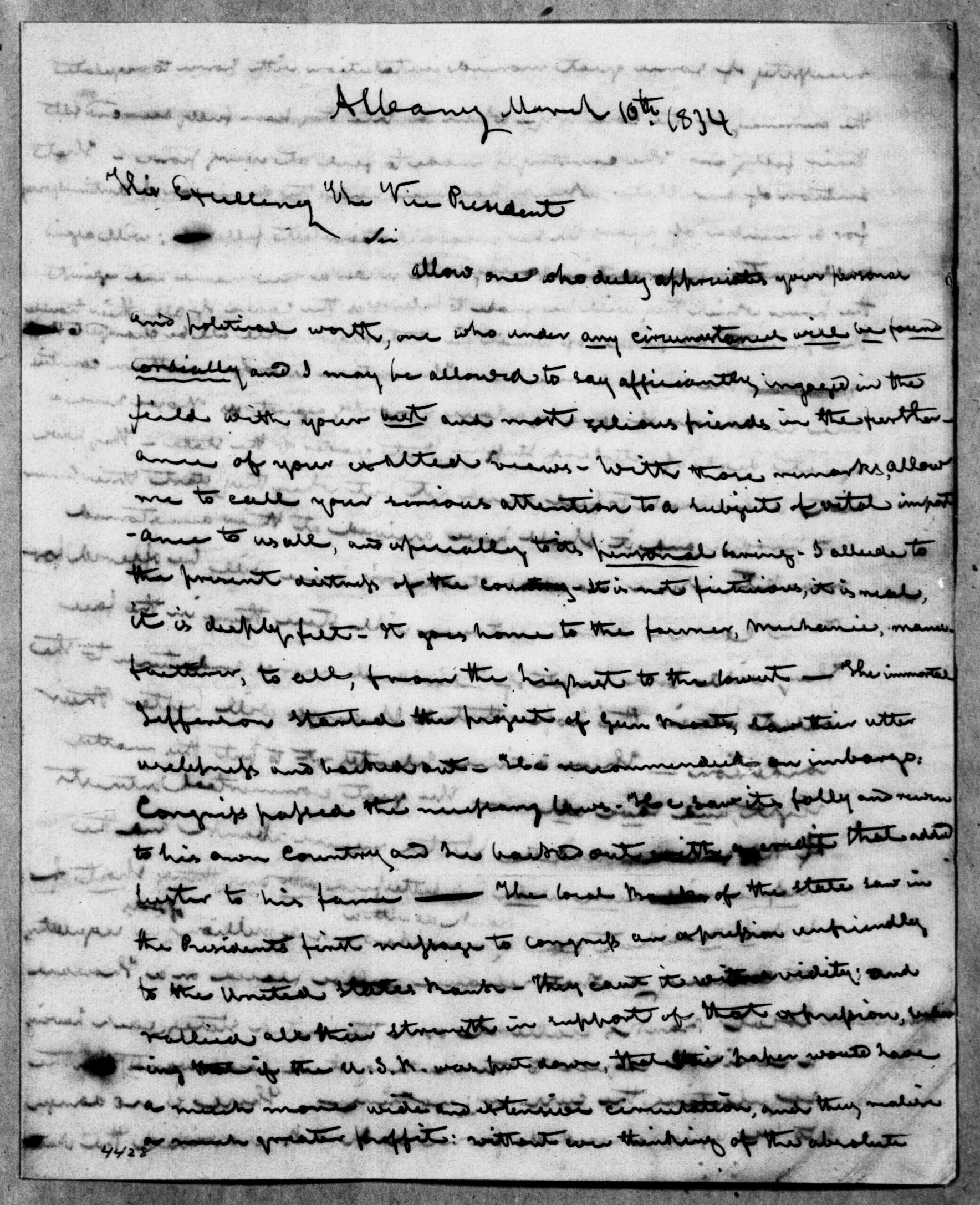 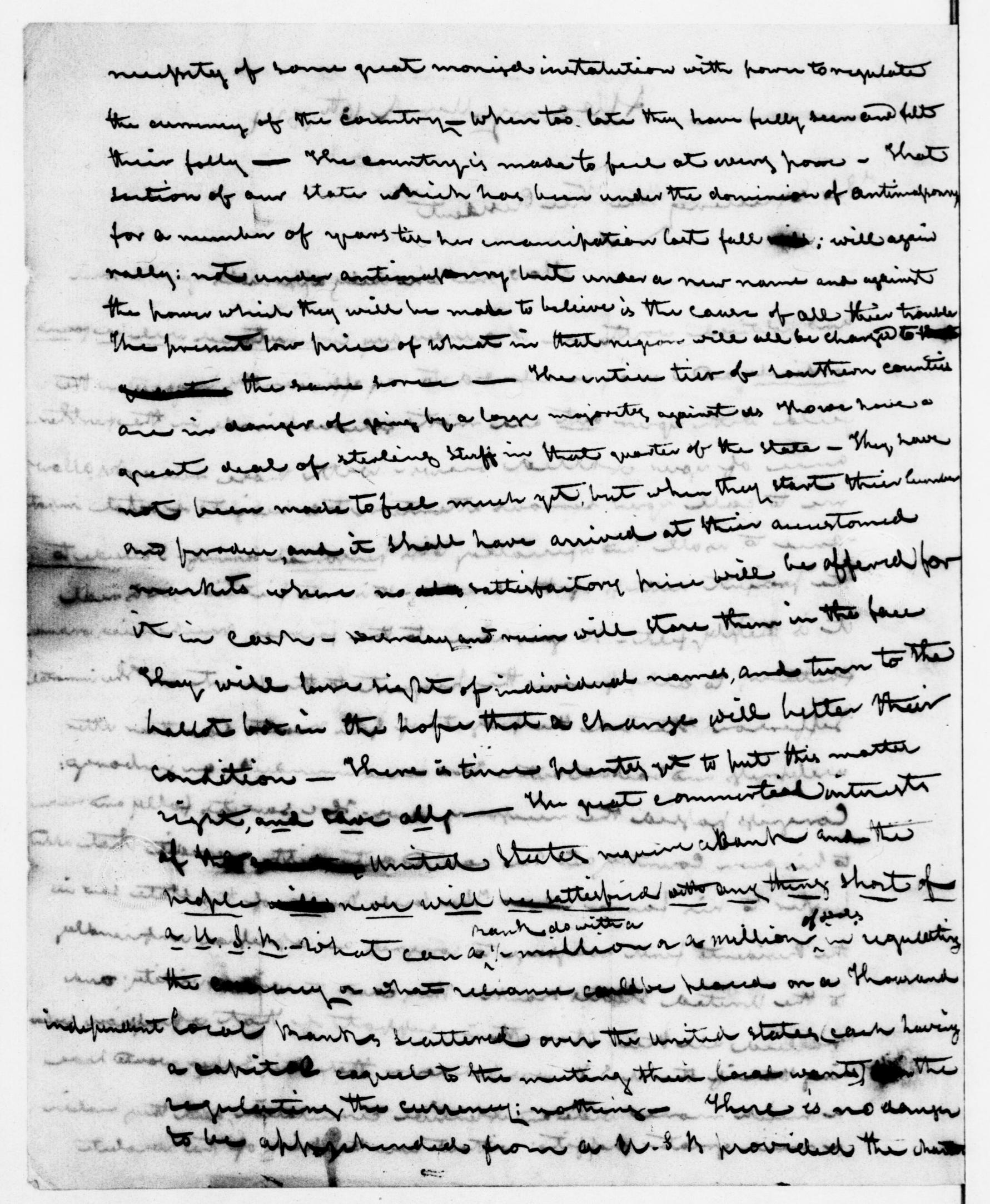 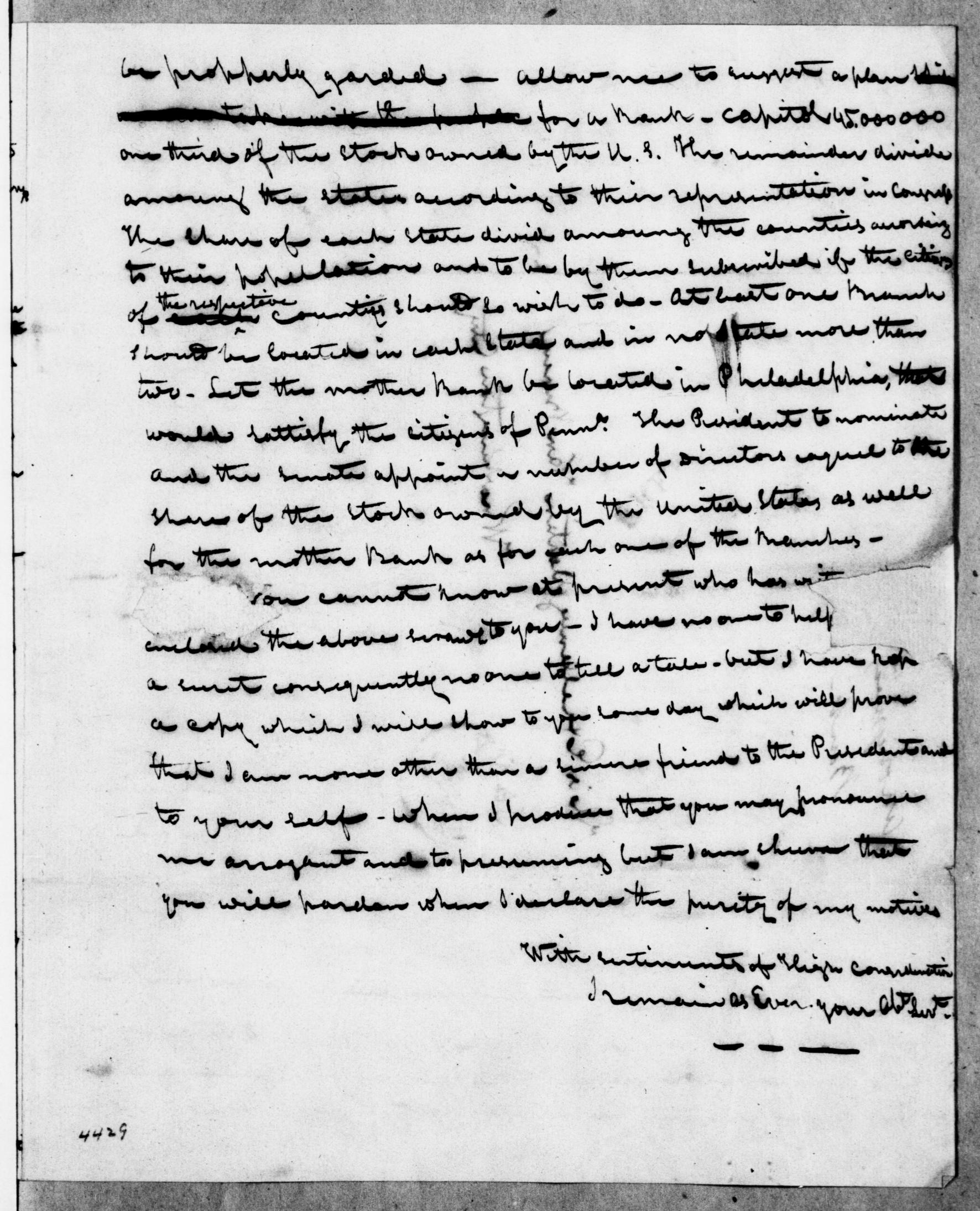 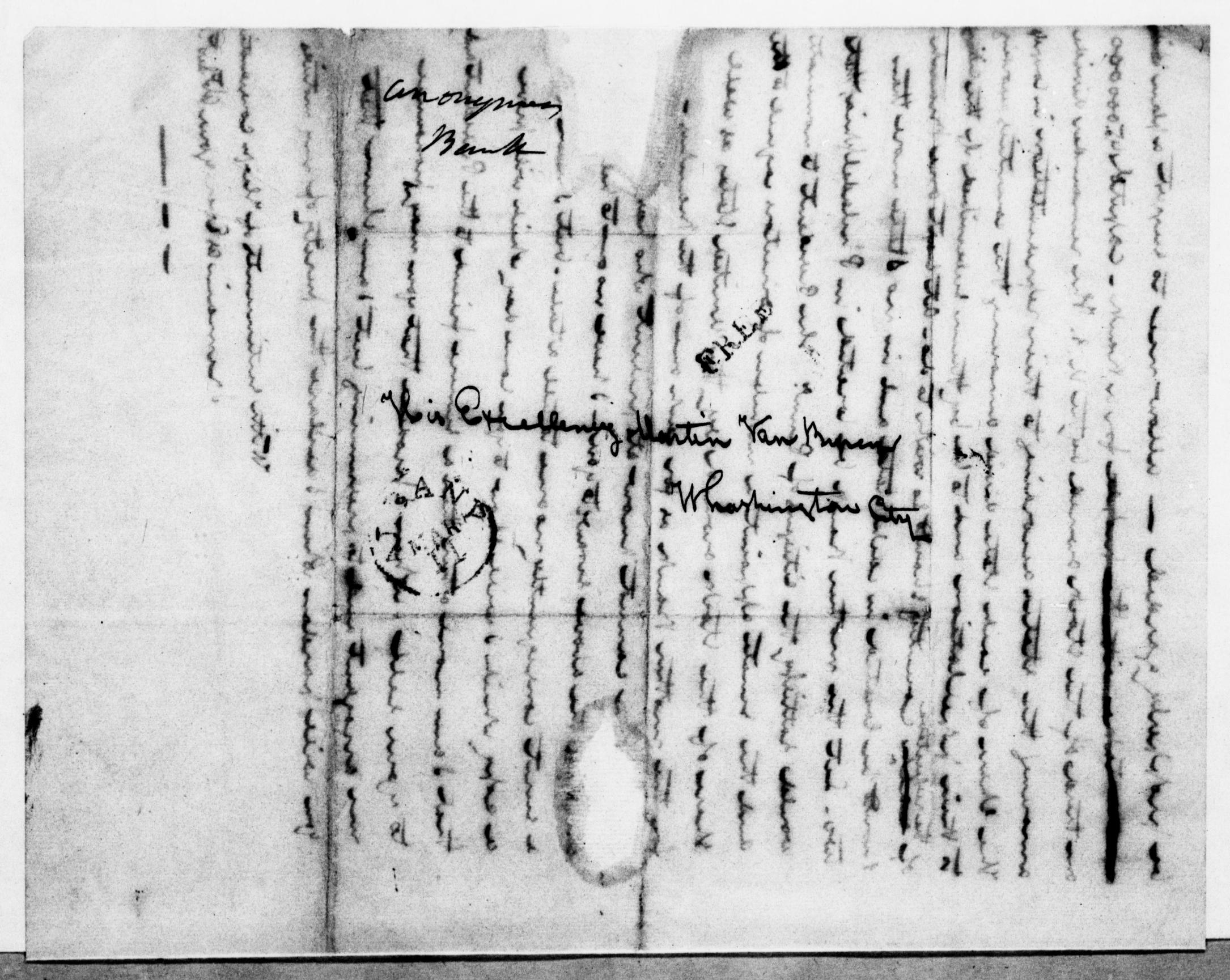