I cannot let pass the opportunity of thanking you for the Copy of Mr. Rives’s speech, which I received this morning and have just finished reading for the second time, as I had previously seen it in one of the Newspapers. It is a noble speech, such as we see in the old discussions of constitutional questions, when they went to the bottom, in half the time they now take to skim the surface. I took the liberty some time since to express my opinion in a Letter to Mr. Rives, with whom I had formerly some slight acquaintance, but not having received any reply, am ignorant whether he ever received the letter. I see he has signified his intention of vacating his seat in the Senate, in consequence of not being able to obey the instructions of the Virginia Legislature on the Subject of the Bank. The Country can ill afford to lose his services just now, but I think he has acted as became him, and pretty certain his retirement will be only a passport to higher honours. I should like to have seen how those independent Senators, who, as the vulgar say, Legislate on their own Bottoms, looked when Mr. Rives announced his resolution.

Now that I have factored a letter on you at all events, will you allow me to make one or two suggestions, on the present state of public affairs? I do not wish you to reply to them.

Have not the State Banks been alarmed a little too soon, with the Plan of restoring a Specie Currency, and consequently restricting their circulation? That the people at large will highly approve such a course I feel very confident, for they begin to comprehend the effects of the Paper System on their Prosperity. But the great Body of the People never combine, while the monied Interests always do when they are attacked; for however they may envy or oppose each other on ordinary occasions, they have like the Priests, one great common interest, which when menaced always acts as a cement to bind them together. If they should be alarmed into a league offensive & defensive against the Administration, in order to preserve their monopoly of the currency, it would much increase the difficulty of the present struggle with the great Enemy. If the Old Hen should bring all these Chickens into the field, they will make a D---l of a Cackling; but if they are pitted against each other, they will in a great measure neutralize their forces. I feel such a deep interest in the success of this noble project for substituting money in the place of Rags, that I would willingly lend my mite to bring it about. I am convinced that a metallic circulation, will do more to check extravagance, than all the sumptuary laws ever devised, for I myself have often bought things I did not want, only to ^get^ <no> <illegible> of a filthy Bank note that was enough to create a pestilence in my pocket.

I would also beg to hint with the greatest deference, the necessity of Economy in the appropriations for succeeding Years, at least till the present crisis is past. I think there can be little doubt that the revenue will be less in one or two succeeding Years, than it was in the two or three years past. Were the expenditures not to be met by the receipts of the Government, the alternative would be taxation or Loans, either of which would be very obnoxious to the People, and afford the opposition a fine subject for reproaching the administration. They would Swear it was all owing to the removal of the Deposites. It seems to me ^too,^ that great care should be taken to avoid any expenditure which may give the Tariff Party a pretext for increasing the Duties again, which would be the result of a deficiency in the Public Revenues. I dare say, all this has occurred to you, but if so, there is no harm done, except that of occupying your time unnecessarily.

I think the Panic is dying away fast, as indeed was to be expected. Panics never last long, because Cowards either run away, or stay and get used to them. The present Panic has operated something like the Cholera; it has carried off the debilitated, infected, & corrupt portion of the Community, and will leave it in a much more healthy & vigorous state hereafter. As to the clamours from Wall Street, whenever I want to Krow the real sentiment of the great majority, I watch the course of the merchants and know that the people, are going directly the contrary way, as hard as they can drive.

I hope you found the House fitted up in a comfortable Style, and that you will one day remove to a larger one.  Whether it will prove more comfortable is another affair. With the greatest respect & 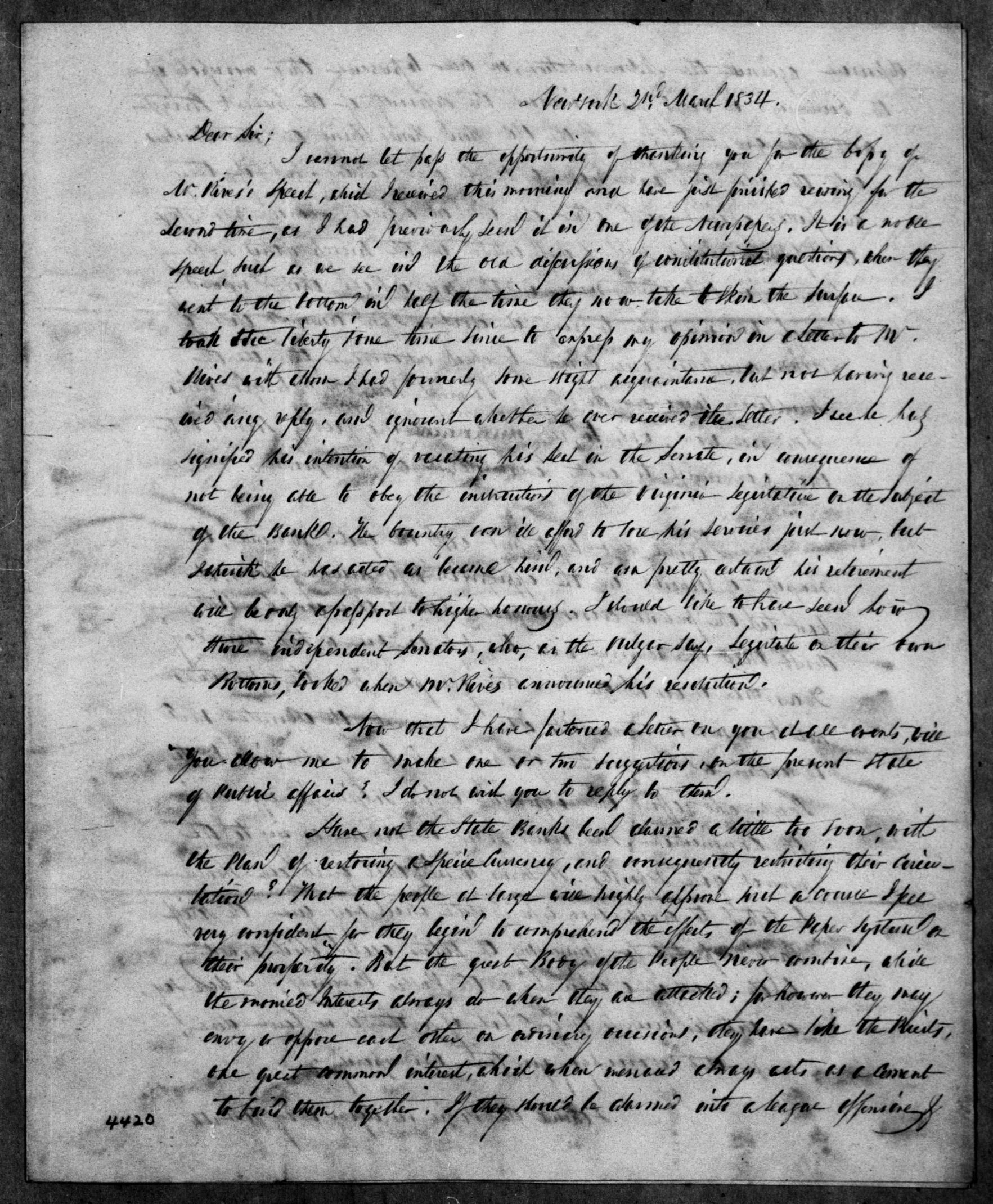 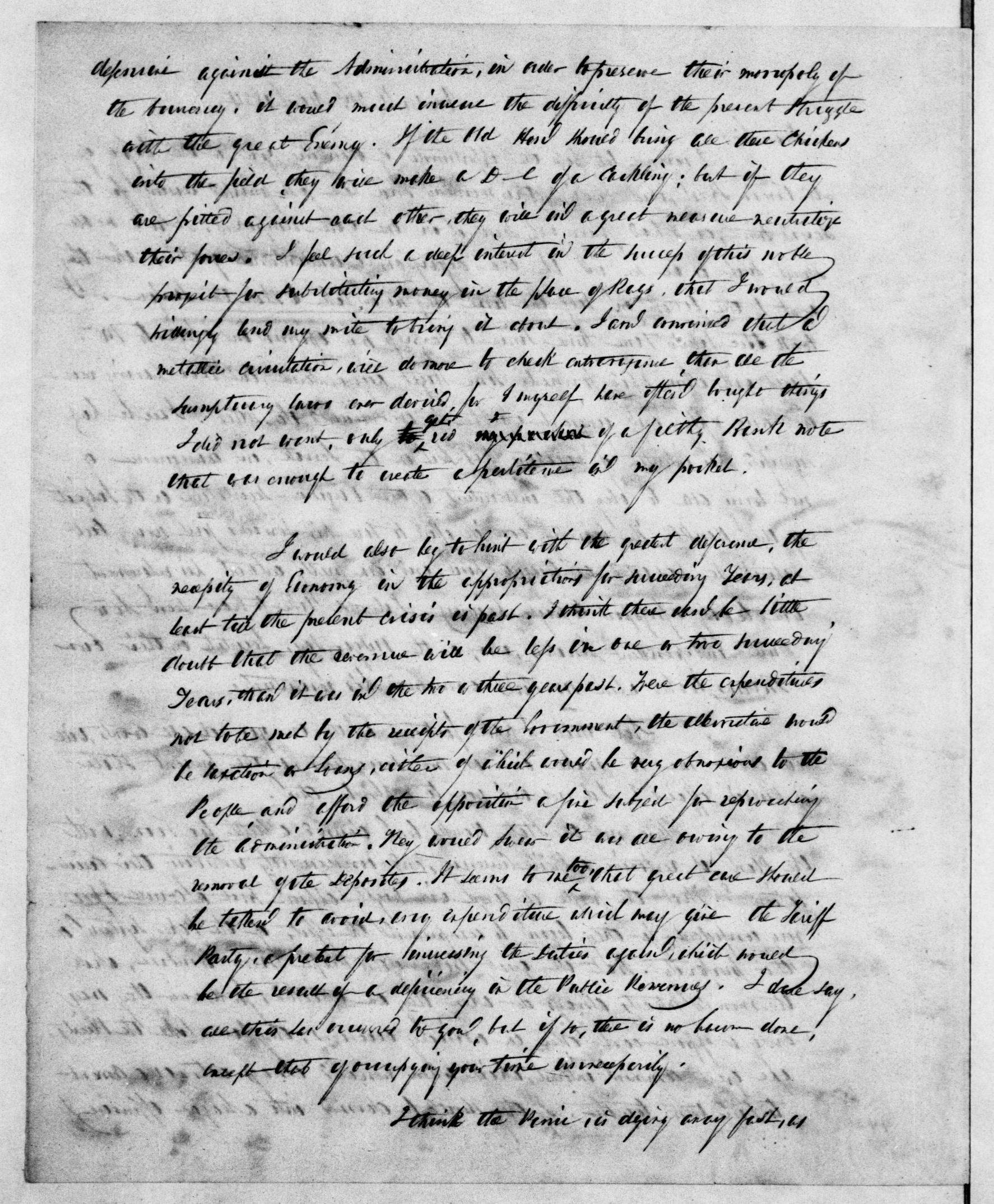 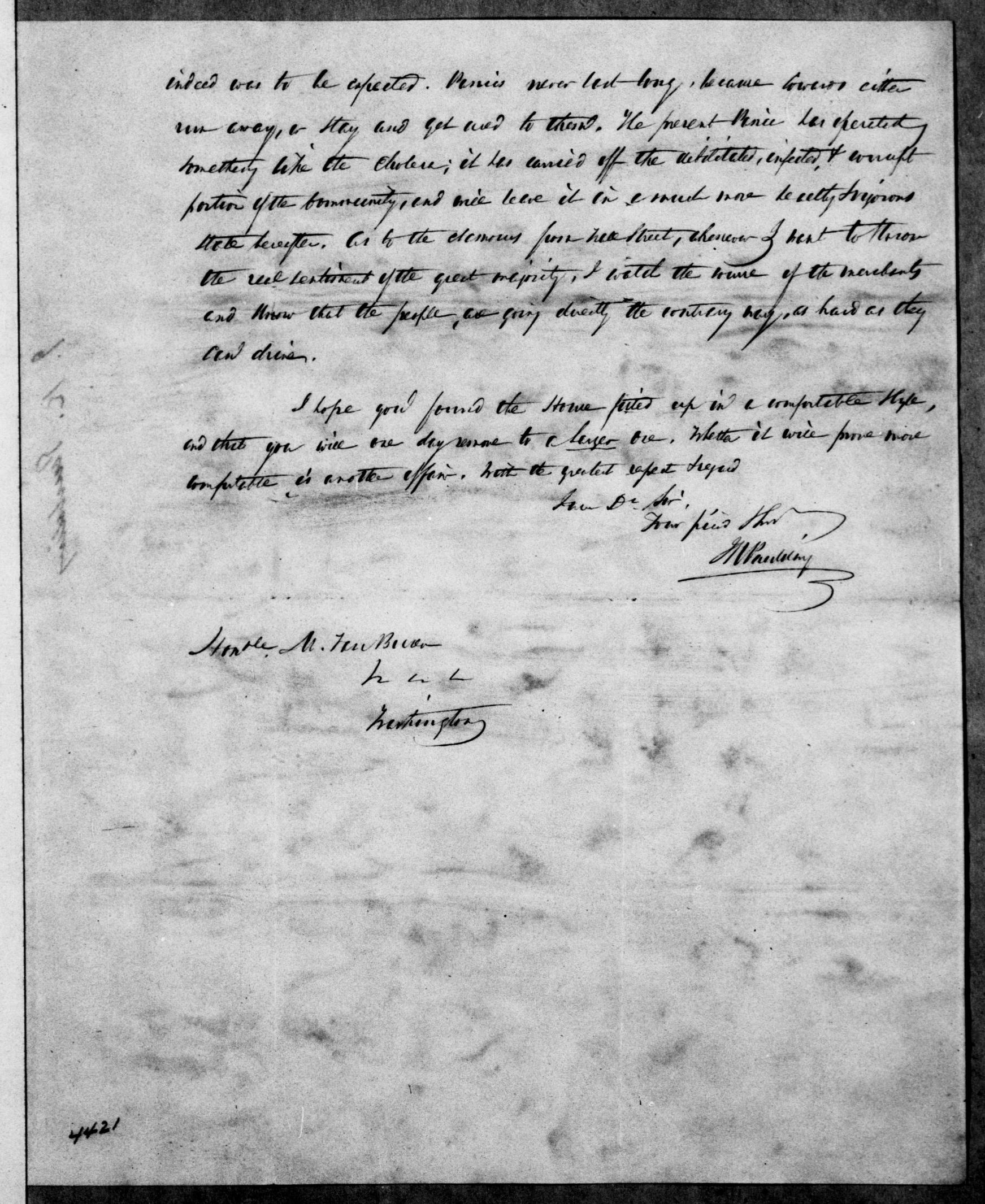 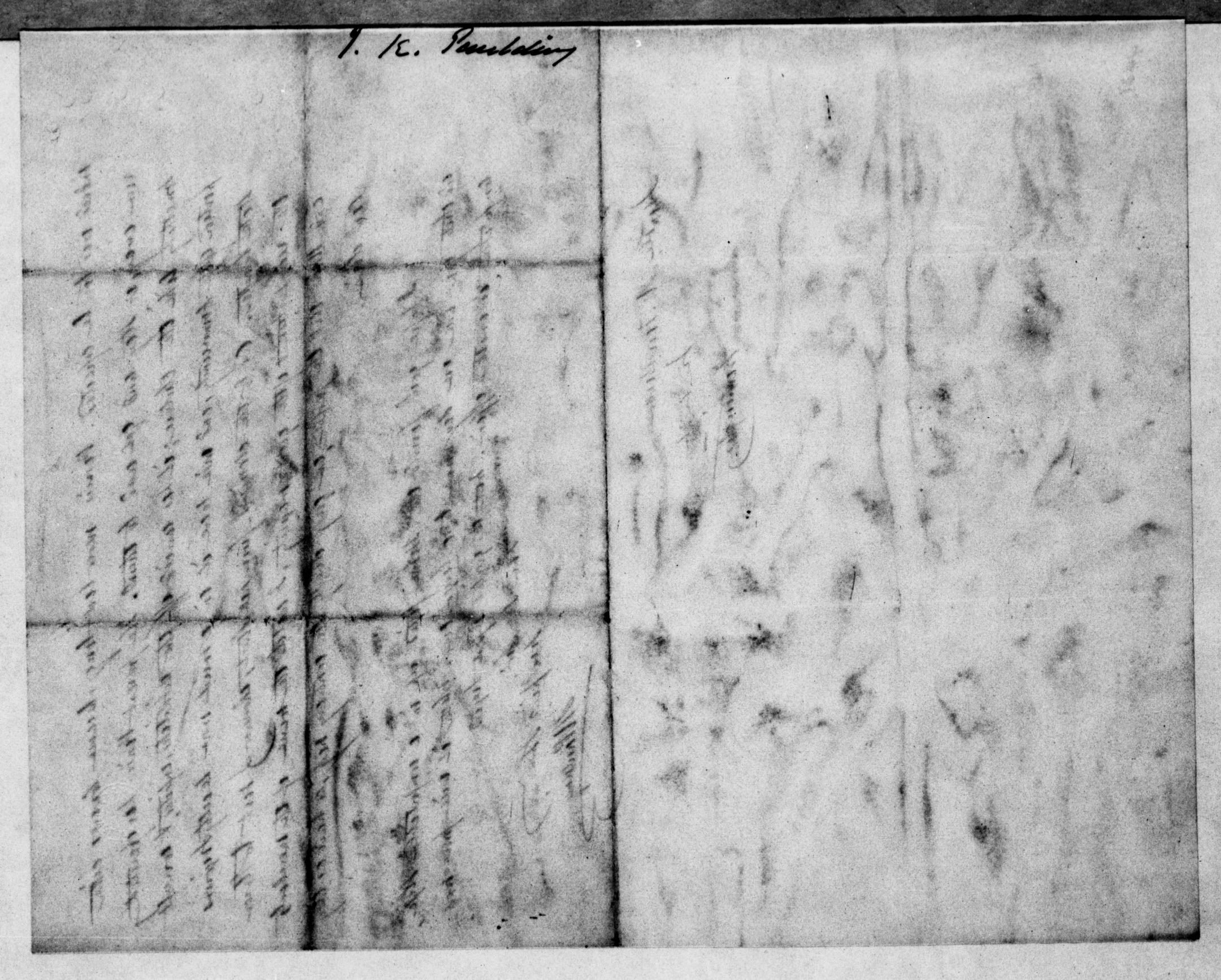