Your son John I then yesterday sent to me a part of a Letter which he had recently Recd from You, in relation to the office of U.S. Atty at N york, & which You request him to show to me.

You observe that 24 of our members have <signed> a recommendation of Mr Tallmadge. That the administration is certainly dependent upon the n york Delegation. That the President also feels a proper delicacy toward Senator Tallmadge, and would greatly <illegible> to <illegible> his feelings. More particularly under present circumstances, and that If this state of things continues he cannot <let> the <wishes> of the delegation at difiance, and that You & Mr Wright had conferred upon the subject, and had concluded to advise the President to refer all the Papers & names (of the Candidates) to the delegation, & let them make the selection. It appears to me that You attach more Importance to the recommendation of the Delegation, & to the feelings of senator Tallmadge, than Justly belongs to them under the circumstances of the <case>. If Mr Tallmadge was instrumental in procuring the <illegible> of the delegation in favor of his Brother (as I infer he was, from a previous letter of Yours to Your son, in which you speak of the unparalleled selfish Cupidity of the Tallmadges &c &c) he was guilty of a gross violation of duty & decorum. He must have known that there would be several Competitors for the place, and his conduct, in availing himself of his situation, thus prematurely to Commit the members in favor of his Brother, before they were apprised, who the Competitors would Be, was most <illegible> & reprehensible. I do not doubt, that many, If not all of those who were thus entrapped, are heartily ashamed of It, and will say so, If properly interrogated either by the President or his Friends. But If the appointment is committed to them, It may present a very different question. They are to a certain extent, pledged to Mr Tallmadge & to no one Else. He has the requisite ability & qualifications for the place, and they may naturally say, that If with a full Knowledge of these facts, the President devolves upon them the duty of selection, he must expect them to find <effect> to their particularly expressed opinions. That he has no <illegible> to throw this responsibility of the selection upon them, for the purpose of making them eat their own words. I must confess I should be very apt to <reason> & act in this way myself.

The Delegation must Know that their recommendation under the circumstances in which It was given, <illegible> & would be considered by the President, as nothing more than a certificate of Mr Tallmadges fitness for the place. That It could have no reference to his relative <illegible> and pretensions over other Gentlemen, for how others were at that time Known, as desiring the situation. This is the View that I should support the President would <talk> of this matter & which I have no doubt would be entirely satisfactory to the Delegation. I presume they have not as a Body, perhaps not a single Individual of them, any strong personal feelings in this case. They gave their names to Mr Tallmadge, because they were first applied to try him as his Friends. But do You doubt that they would as readily have given them to me or Mr Edwards or Mr <Rives>? Ask them the question, and if they admit that they would, It settles conclusively the character of their recommendation & the Influence which should be given to It. Our <illegible> <illegible> (If the matter were to be settled in that manner) which The recommendation which the governor, & our Friends here were good enough, spontaneously & unknown to me, to address to the President in my behalf, with a full <illegible> on their part of all the Candidates.

You can not seriously suppose that the political course of Mr. senator Tallmadge, or of the Newyork Delegation, will be in the slightest degree affected by the <decision> of this Matter. I hold them all to be above the influence of such paltry motives, and If I did not, I should despise them too much to condescend to conciliate them.

I understand the President has <illegible> that my residence out of <the> district would create no obstacle to my appointment. That from the nature of office Jurisdiction extending over the state, My Residence <need> <supposed> to be fixed with a View to the convenient discharge of Its duties. This certainly can not be a substantial ground of objection.

Having thus adverted to the difficulties which You allude to, as belonging to the case, You will now allow me my Dear sir, with all plainness & sincerity to say, that I have been mortified & disappointed at the course which this matter has been permitted to take. When I spoke to You upon this subject, on the Eve of Your departure for washington, You informed me that you were entirely uncommitted. That Mr Tallmadge was the only Individual who had spoken to You, in relation to this office, and that You had discouraged him from being a Candidate. You advised me that It was unnecessary & inexpedient for me at that time to do any thing in this matter, or until I should hear from You. I certainly understood You to be Friendly to my application, and that You would take charge of my Interest in the matter. I accordingly never opened my lips to any other Person, in relation to the office, until I was informed by Mr Edwards, that Mr Tallmadge had obtained a recommendation from the members of Congress, & had written to our Friends here for support for his Brother. I then informed Mr Edwards what of what had passed between us, & that I should take no measures until advised of their necessity by you. I Immediately wrote to You, stating <illegible> <illegible>. To which ^Letter^ I have sent as <illegible> had <illegible> <illegible> of receiving can <illegible>. My letter to You forwarded upon the assumption that You wished my appointment, and that It was to be provided through your Instrumentality. I certainly did suppose that It would be effected through Your open & avowed Instrumentality. I did not suppose that It was necessary or would be becoming in me, to resort to <relation> & recommendation. I supposed that You would state to the President who & what I am, my private Political & official character, and would Frankly say to him ^<others>^ that my appointment would be entirely satisfactory to the People of this state, & gratifying to You. I supposed this course due to my public station & character, and I may be permitted to say to the Relations of private and political Friendship, which have so long subsisted between us. It is the course I certainly should have pursued in relation to You, If any circumstance & <Position> had been <Changed>. I have not been a little surprised therefore, at observing the exceeding caution of Your letters to your Son. Not an expression from which You <illegible> in this matter Could be inferred suggesting doubt & difficulties as to my success, containing imperative Information that you name should on no account be mentioned in this matter, and above all that you had finally concluded to renounce all agency with, and to advise the President to submit It to the decision of the Delegation, Two thirds of whom were already Committed in favor of Mr Tallmadge.

You must be sensible, that independently of the consideration, which make this office desirable to me, defeat will be productive of deep mortification. It will be the first Instance I venture to say in the History of this Government in which an individual, occupying a high Judicial station, has under circumstances, bearing any analogy to those which characterise this case, been thus treated. You can not be neutral in the matter. Your position forbids It. The Relations which the Public Know, have always subsisted between us, since we have been in public life, forbid it. If I obtain the appointment, It will be attributed to Your agency. If I do not, to your <illegible> If not active Hostility. Whatever the difficulties maybe, with which You feel Yourself embarrassed, they must be met. They can not be Evaded. If I could have anticipated the Course, which this matter has taken, I should not have embarked in the Contest, without having made, other & more effectual arrangements to meet It. But It is now too late to retreat. The matter is before the Public & must be publicly disposed of.

I am with sincere Respect & Regard 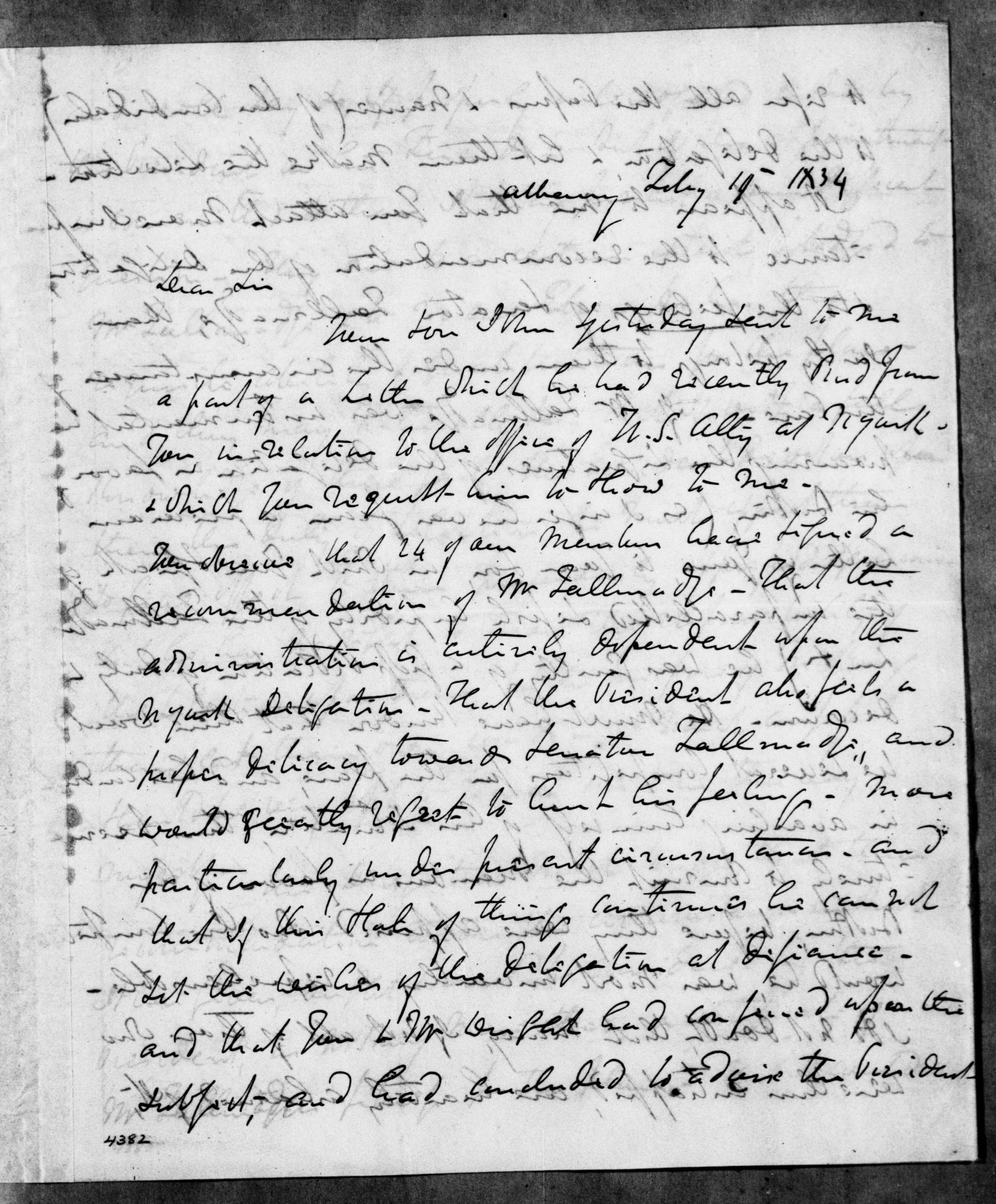 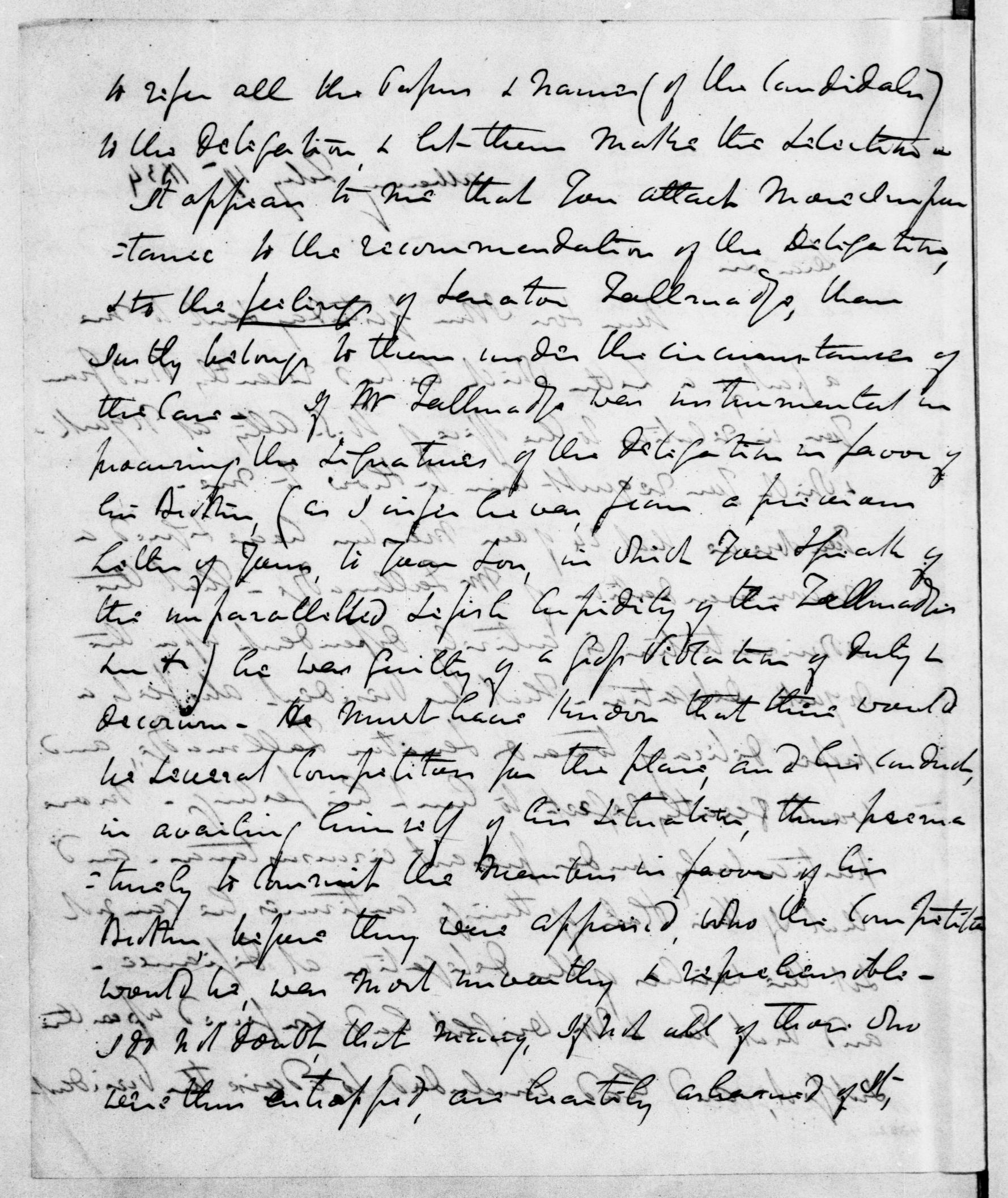 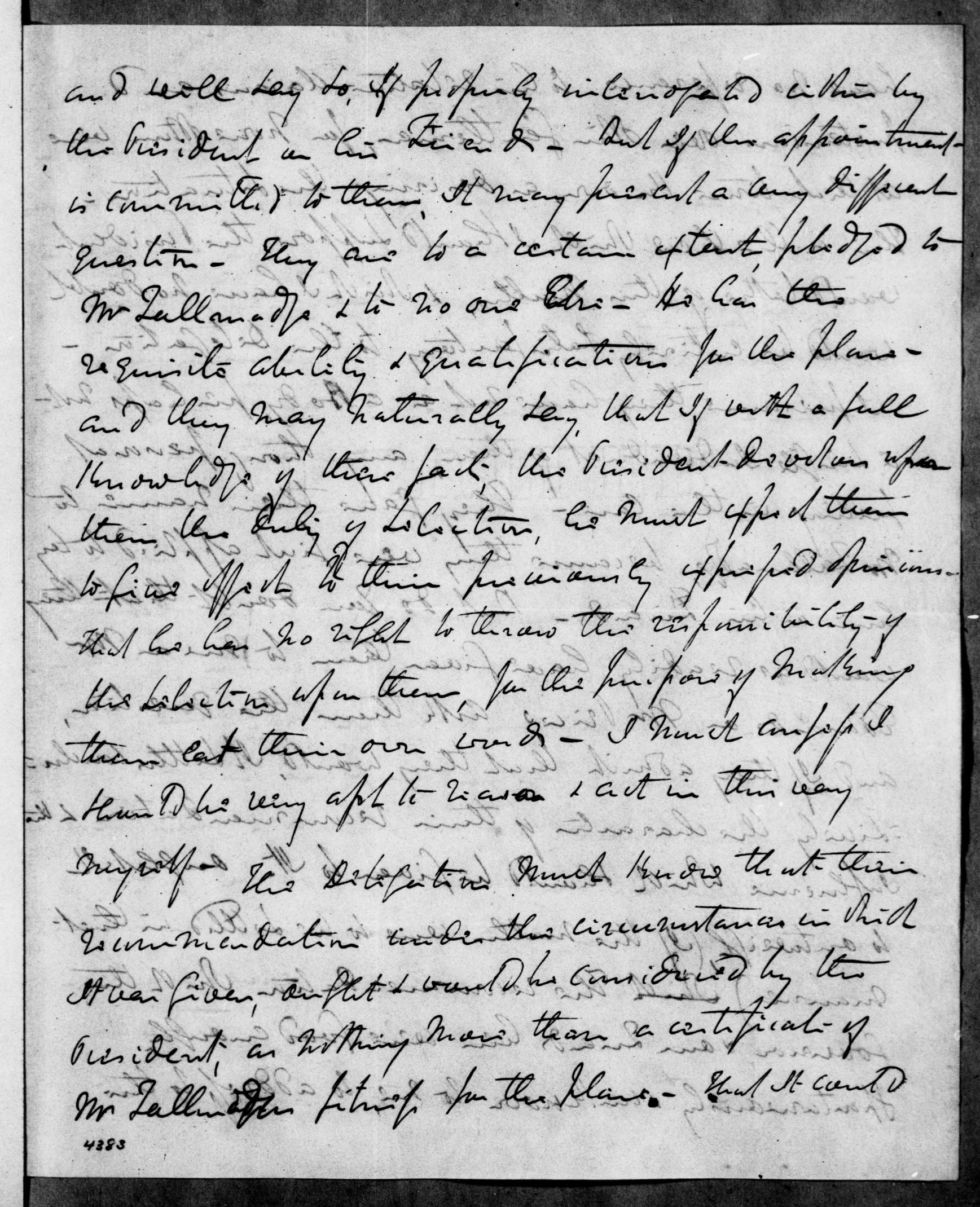 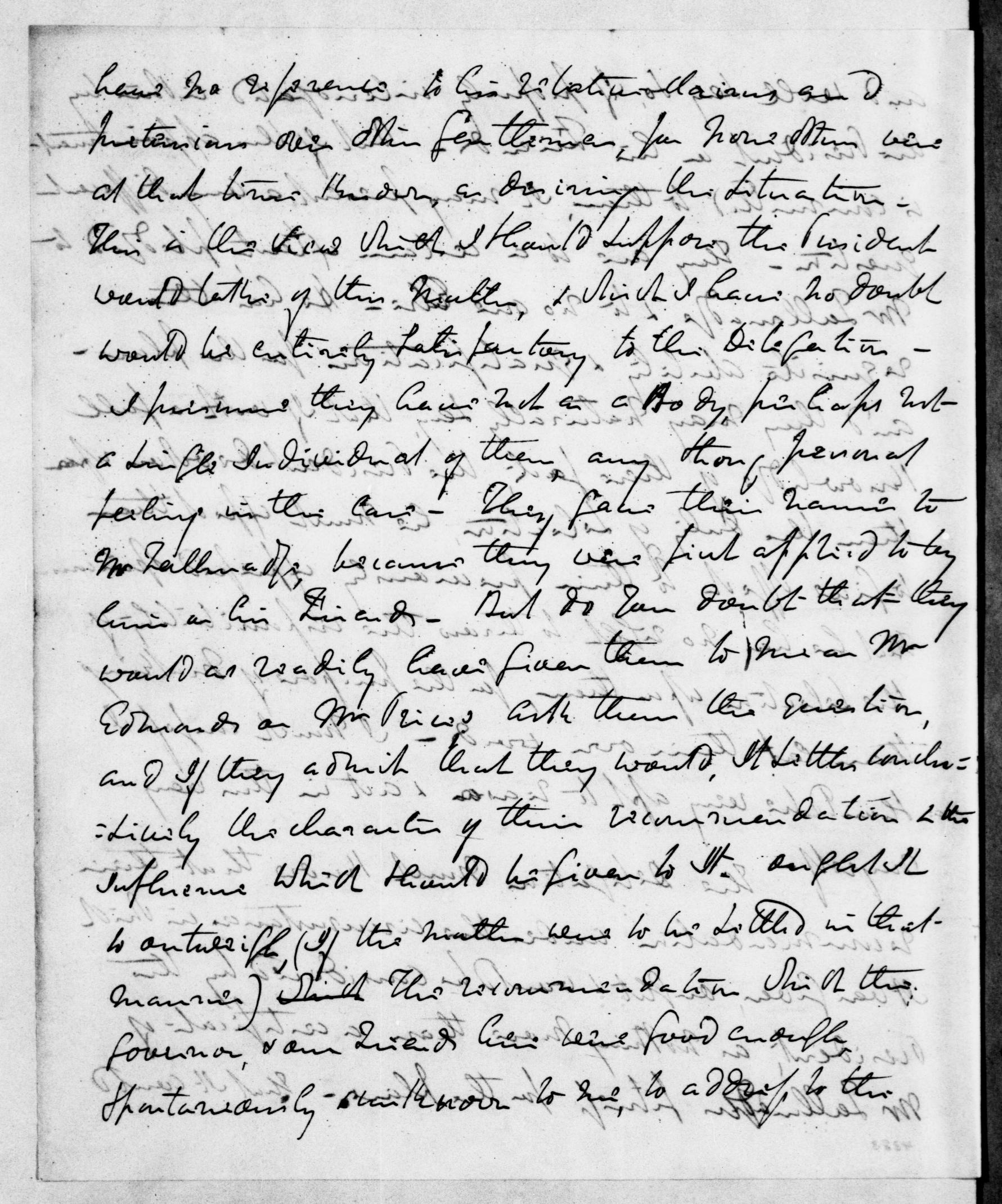 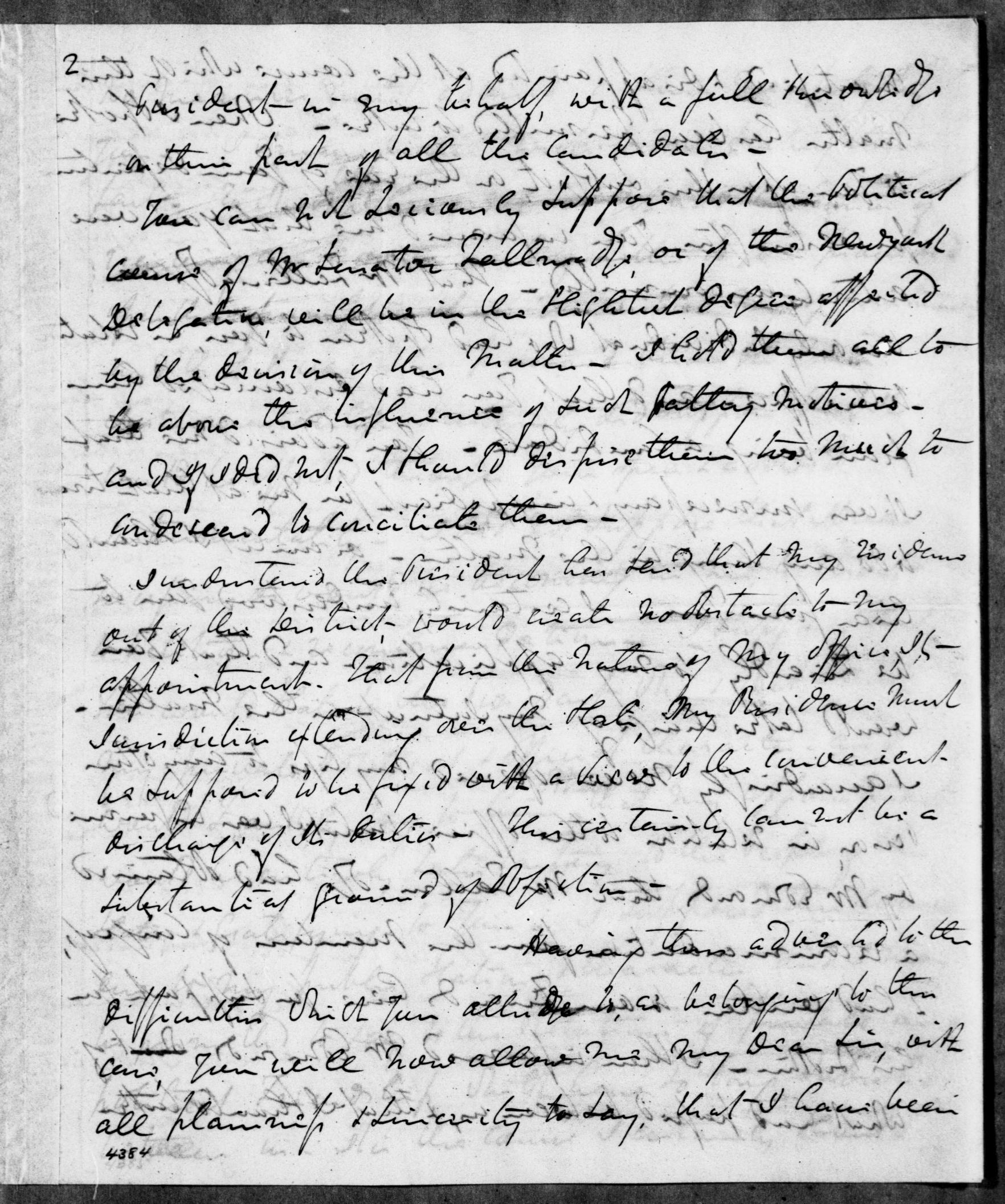 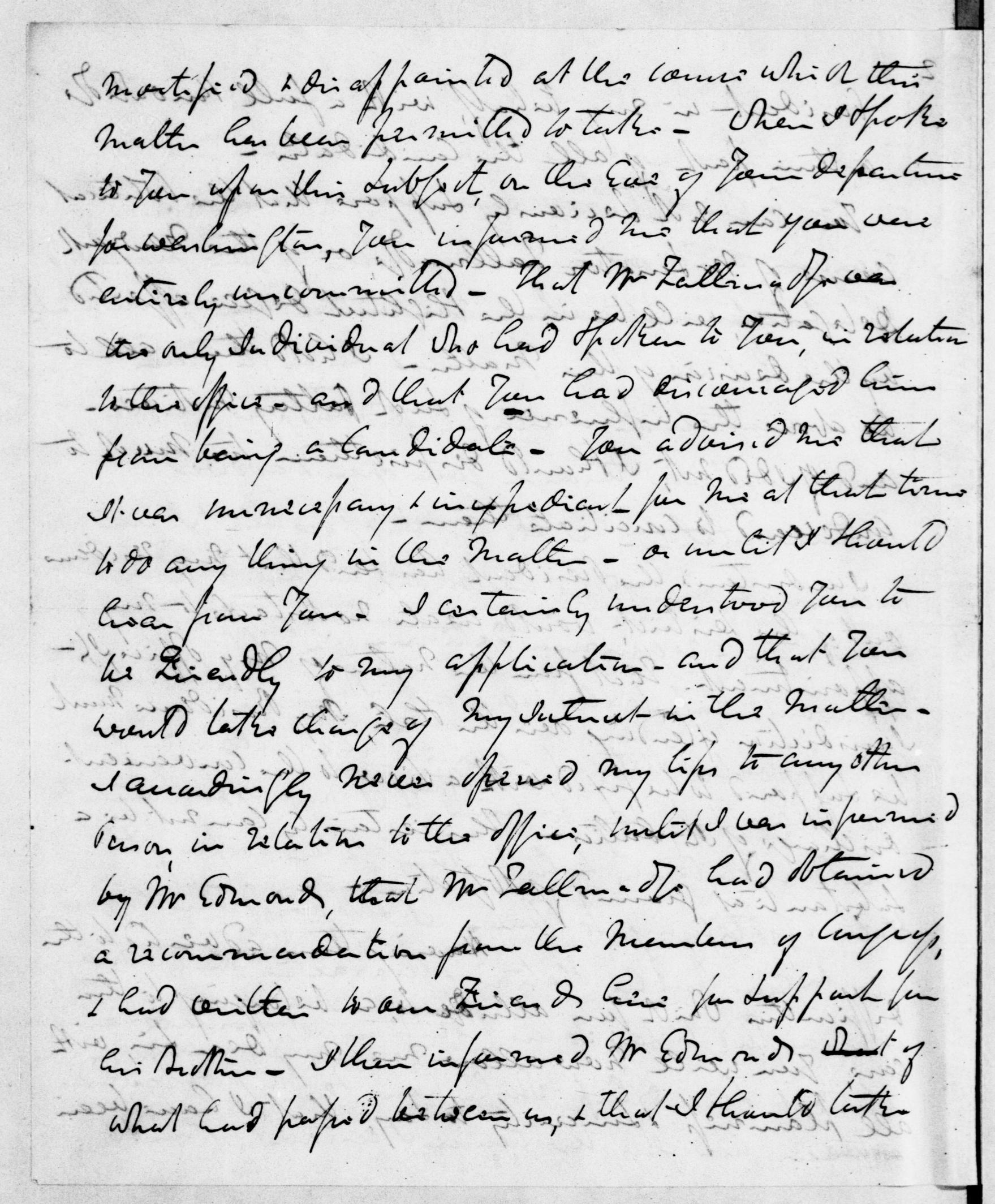 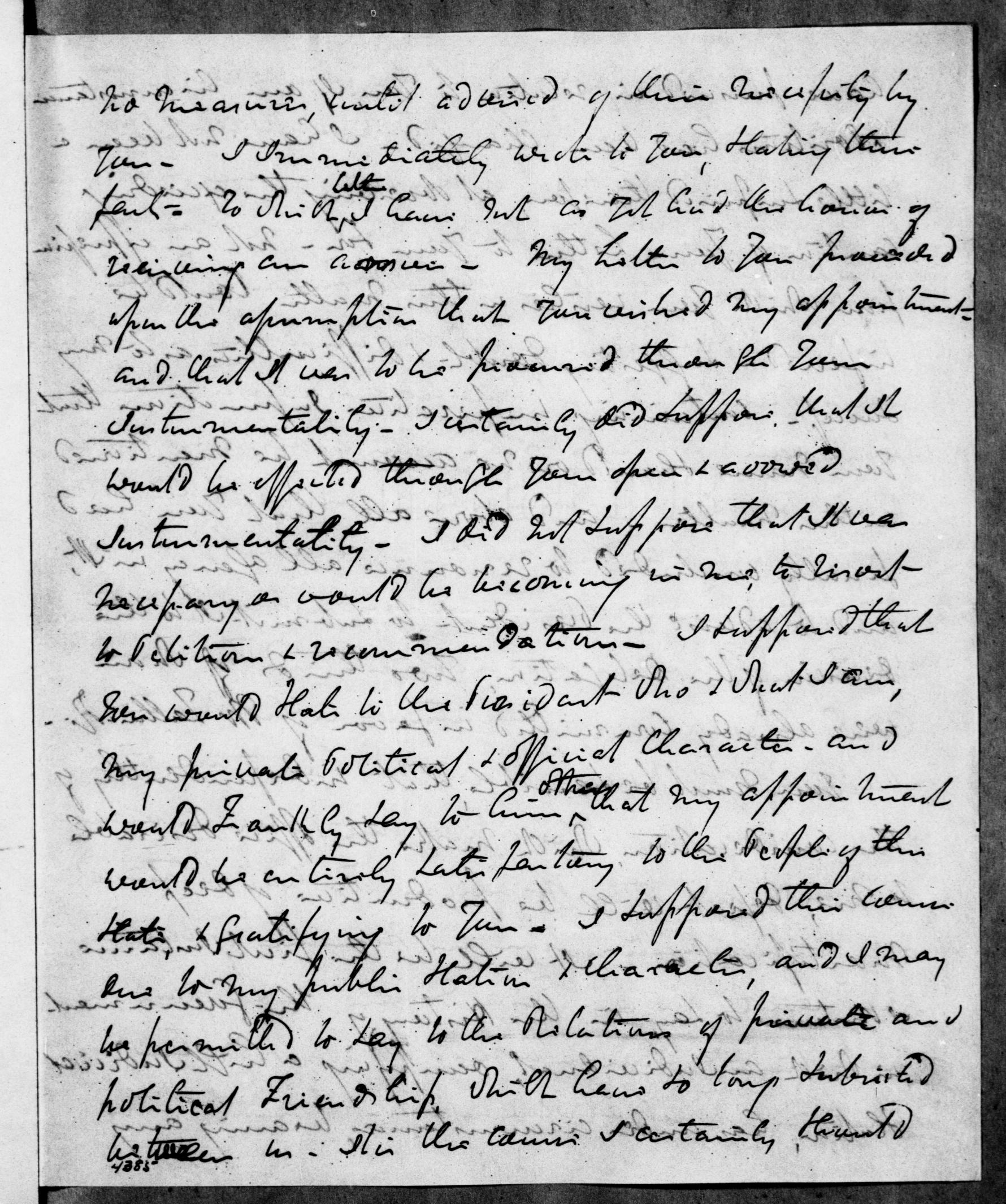 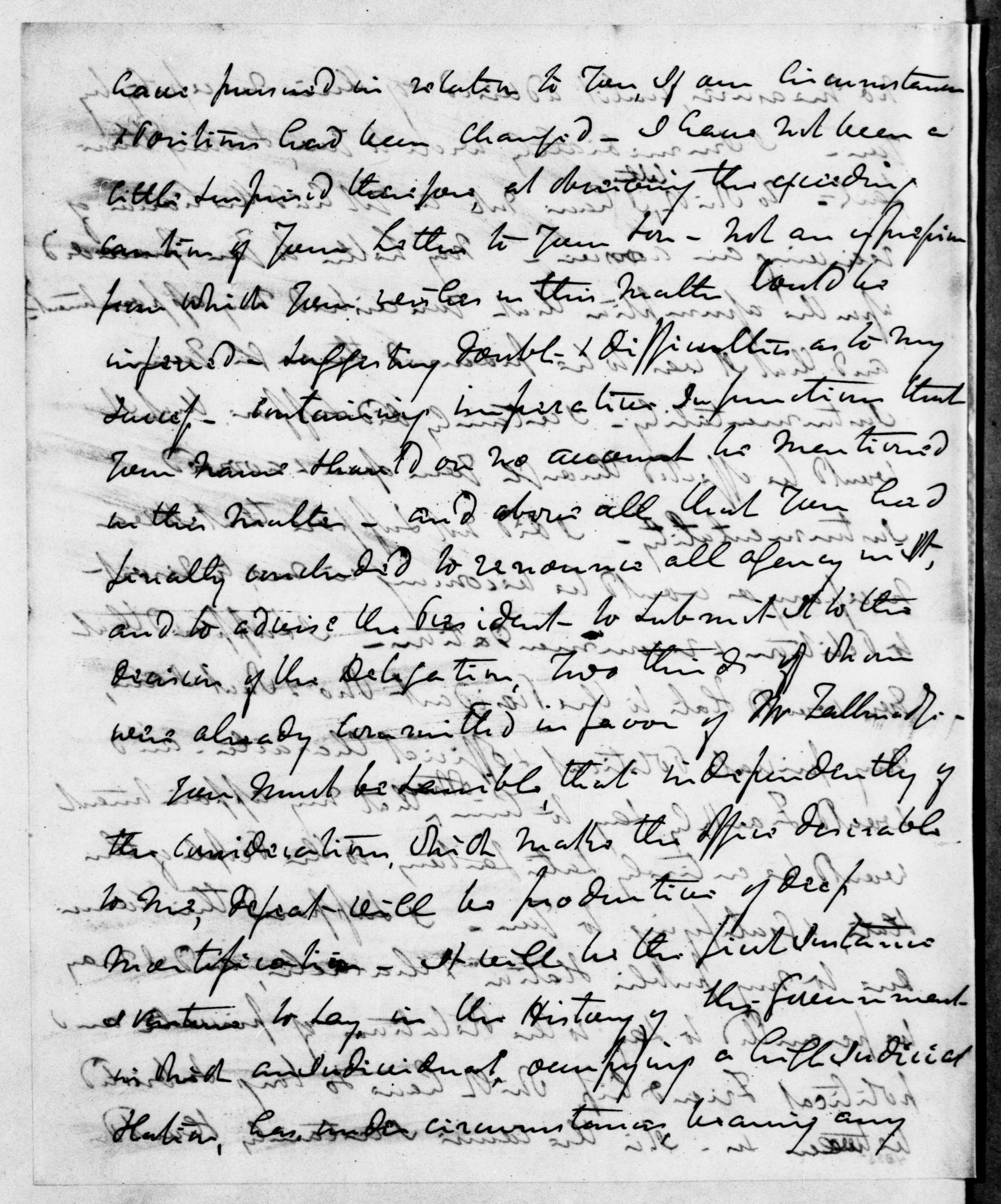 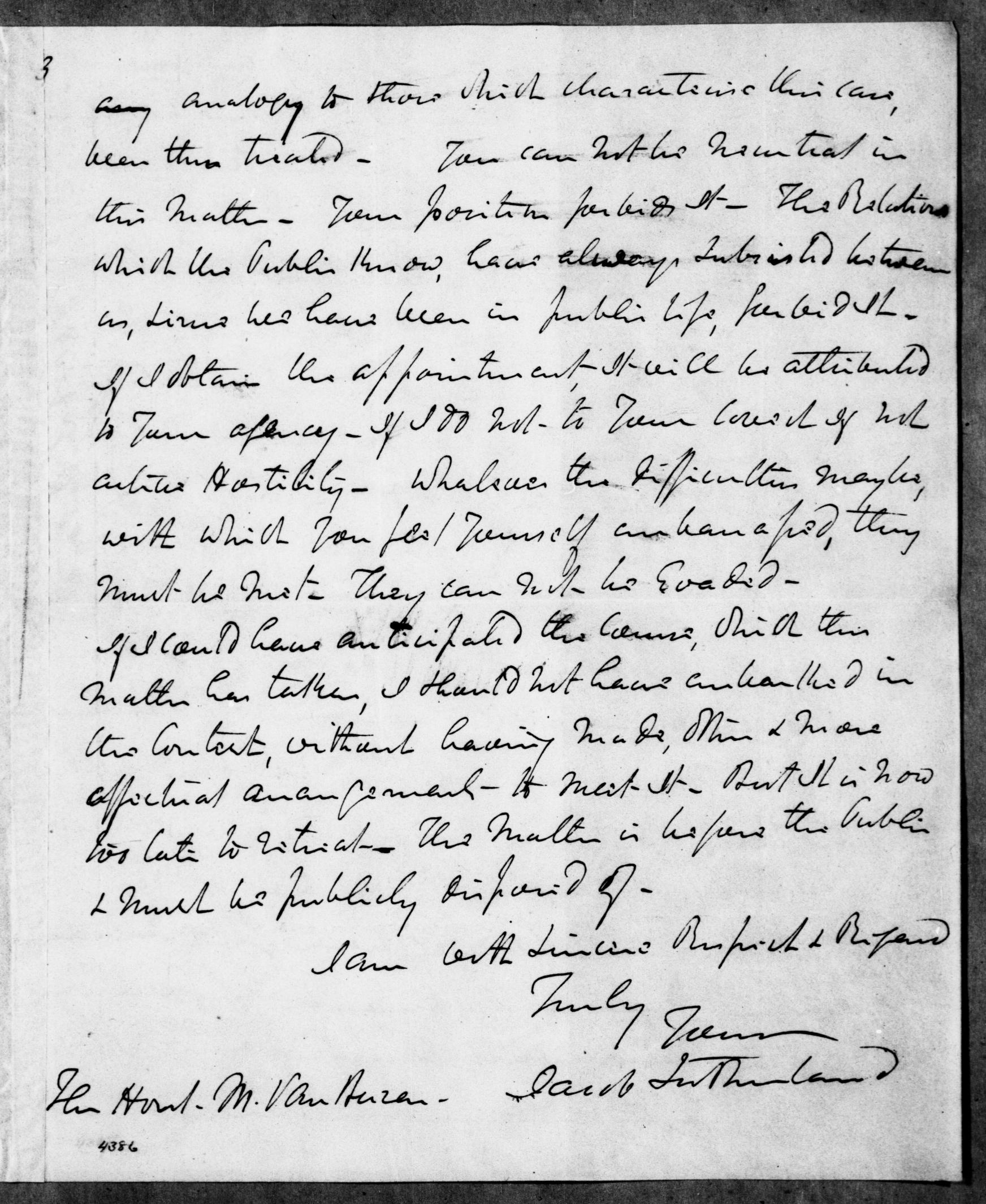