Inclination as well as duty have long since prompted me to write to you. I have however been restrained by considerations which I am sure you will appreciate. I Know that you was "pestered to death" with letters from every body & upon every subject. The importunate asking favors & the silly giving advice. Thus my natural indolence suggested excuses & apologies & whispered "it is time enough", and then ^Lastly^ having nothing to ask, & incapable to give advice to those who had done every thing I approved, I really did not Know what to write about. At last however woman, dear woman the object of all our wishes & our joys (be not alarmed, for there is no plot against you as you will learn by the <illegible>) impelled me to overcome every obstacle and to yield –to- shall I say gallantry? What I had neglected to give to duty. So much for purpose, & now to the subject of my story.

I lately had the pleasure of seeing Mrs. L. Gansevoort (I wish I had the ability & pen of a Byron to describe her) in whose happiness I feel a deep & abiding interest. Did lovely woman ever plead in vain! I Know you will say that this is strange language from a Judge to the V.P. I cant help it. It comes from the heart & I Know it will find a Kind acceptance in yours. Upon respects of this Kind I am neither a stoic or politician. And with all your caution & prudence & discretion I hope you will upon this occasion not pardon a little enthusiasm in me, who are still in the hey day of youth & feeling. The lady has a son in the Navy (a midshipman) & is extremely anxious that he should be <promoted>. I believe you Know him. He is intelligent & from what I have seen & heard I believe him to be virtuous & <illegible>. He lamented in strong & pathetic terms his forlorn <interaction> & the deprivation of the <illegible> to gratify the wishes of her child. “The delicacy of her <illegible> interaction prevented her from applying to Mr Van Buren. She was afraid he might think her presuming & importunate &C &C. I as a father might well appreciate her extreme anxiety &C &C”. Her maternal affection heightened the rich vermilion <which> of her cheeks. I Know what it all meant, I could stand it no longer. I said within myself, let policy diplomacy &C &C go to the devil. And to act the <illegible> <illegible>, I told her, if she would permit me, I would write to you upon the subject. Now you have it all. And if you can resist the appeal, you are made of different stuff, than ^from what^ I supposed.

After looking over what I have written I have only to say, I hope you will pardon the freedom I have taken to write to you in the ^a^ manner rather unbecoming our relative stations, but in some measure I hope satisfied by our former relations & present friendship.

I am anxious to see Mr Butlers report. Mr. Clay I perceive has discharged has seen fit, after gathering gall for a fortnight to employ it upon our friends head. He has not forgotten Butlers speech of last winter. It touched a sensitive nerve. As Virgil says, "<Hanet> in <Catais>, <Cathalis>, arundo”. His professions of respect &C are words, mere windy words. He has shown a wounded & mortified spirit. His object was to gratify revenge. Like all his recent attacks, it has proved <illegible> & <illegible>. He really scolds in the true Billingsgate style.

(The course pursued by the administration is warmly approved in the country. If it now recedes we are lost, our liberty is gone. We may as well fold our arms & make the ^best^ terms we can with our Master. This thing is perfectly understood. My intercourse you Know is principally with farmers. I have lately conversed with men of different political feelings, upon the subject of the Bank, I assure you, with them there is only one opinion. (George <Blair>) from (<Chatham>) told me yesterday, that it was generally understood that to get rid of the tyrant, it would be necessary for the country to suffer from its efforts to prolong its existence. That every person with whom he had conversed expressed a willingness to meet the crisis. The Bank had now proved all the predictions of its opponents, not only ^that^ of its ^had the^ disposition but ability to do mischief. That it was time therefore to strangle it, before it became too powerful to exert its influence & oppression. This is the feeling as well as language of the country).

Mr Wrights speech has done the business effectually. It <arises> (pardon the allusion) with healing in its wings. The New York delegation from the <illegible> merchants, ought to have laid their petitions at the foot of Biddle, & urged him to do what duty, policy & ^the^ interest of the country required him to do. To perform what was said to be the great object of the incorporation of the Bank. The policy of the Government was fixed & unchangeable & they Knew it. The object of the Bank was to compel the government to change ^alter^ its course, by bringing ruin & distress upon the country. Plain as this now appears it still has men of standing & intelligence to approve its relentless cruelty. Depend upon it, that the time is not far distant, when the apologists & retainers of the Bank will be regarded with abhorrence & <blended> with the indignation of the country.

John is so engaged in business that I do not see as much of him as I formerly did. He has written an elaborate & learned Brief upon “<Shellys> case” in reference to a cause I have now under advisement, & in which he was employed & for which Brief as he tells me he has already <fingered> the cast. He is almost constantly in his office, & I bilieve that the only relaxation he takes is in a cup of black tea occasionally with me.

Once more about the Bank. I have it from good authority that the Patroon has openly avowed his conviction from the recent course pursued by that institution ^not only^ that it ought not to be rechartered, but that a national ^Bank^ independent of other objections, is adverse to the prosperity & commercial interests of the country. I sincerely believe that he would consent to preside at a meeting which would promulgate these opinions. I write this advisedly & without fear of contradiction.

The country as yet does not suffer. It is true there is a panic, which must in a little while give place to the great prosperity with which we are blessed, to the energy of the Government & the patriotism of the People. God bless you. Give my best respects to the Major & believe me

P.S. I told Mr. Huggins to day that I was about writing to you, & he earnestly desired me to be most affectionately remembered to you. 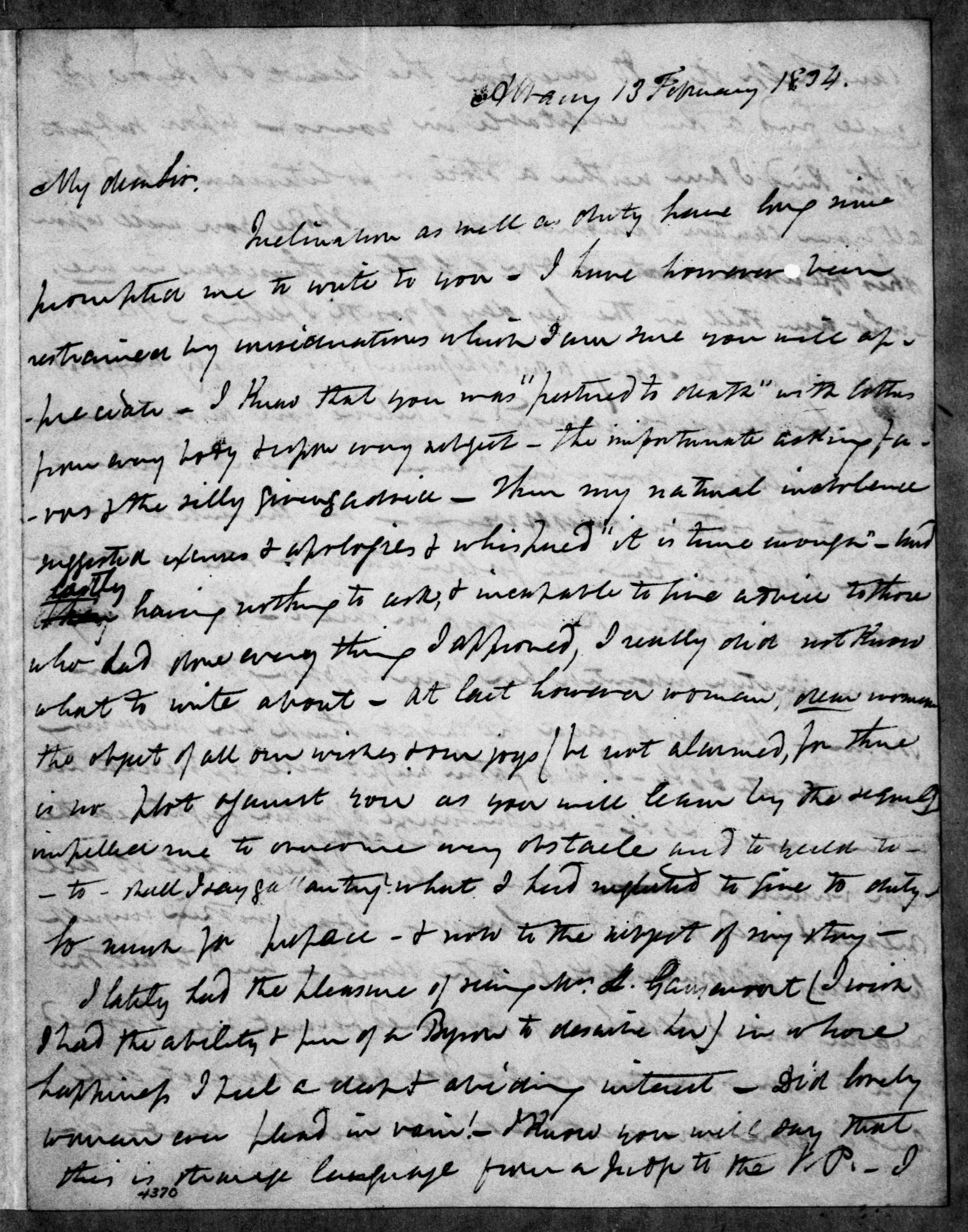 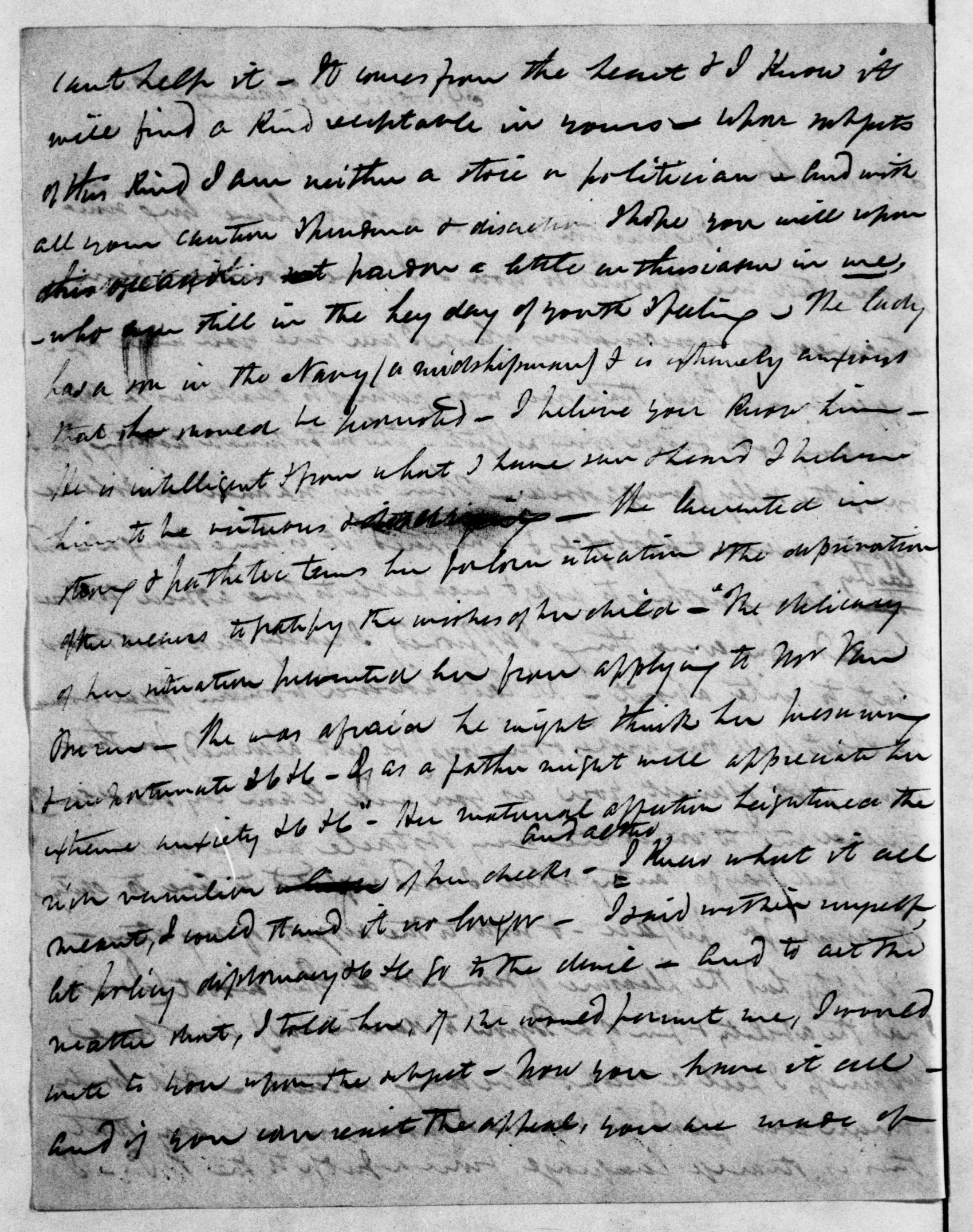 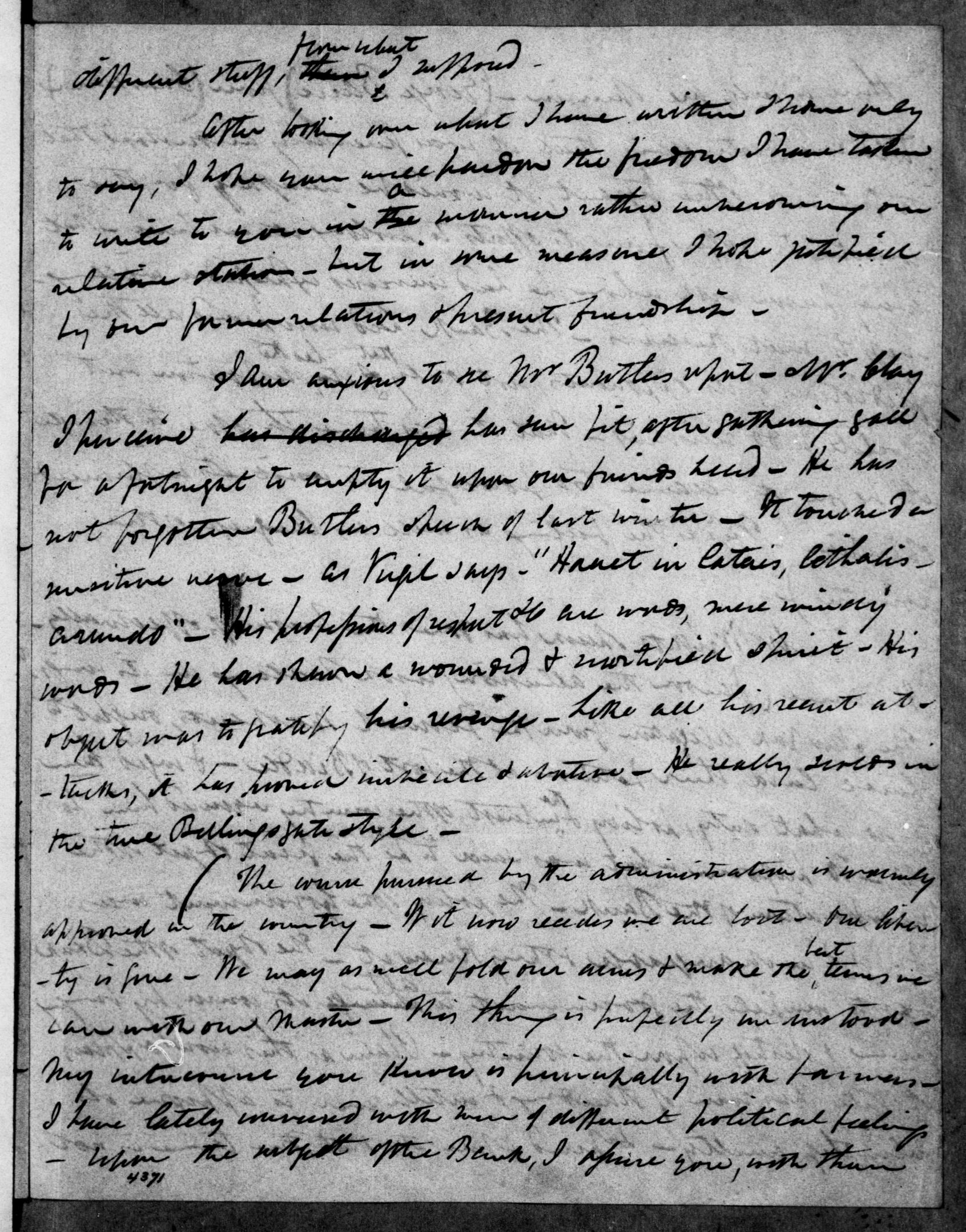 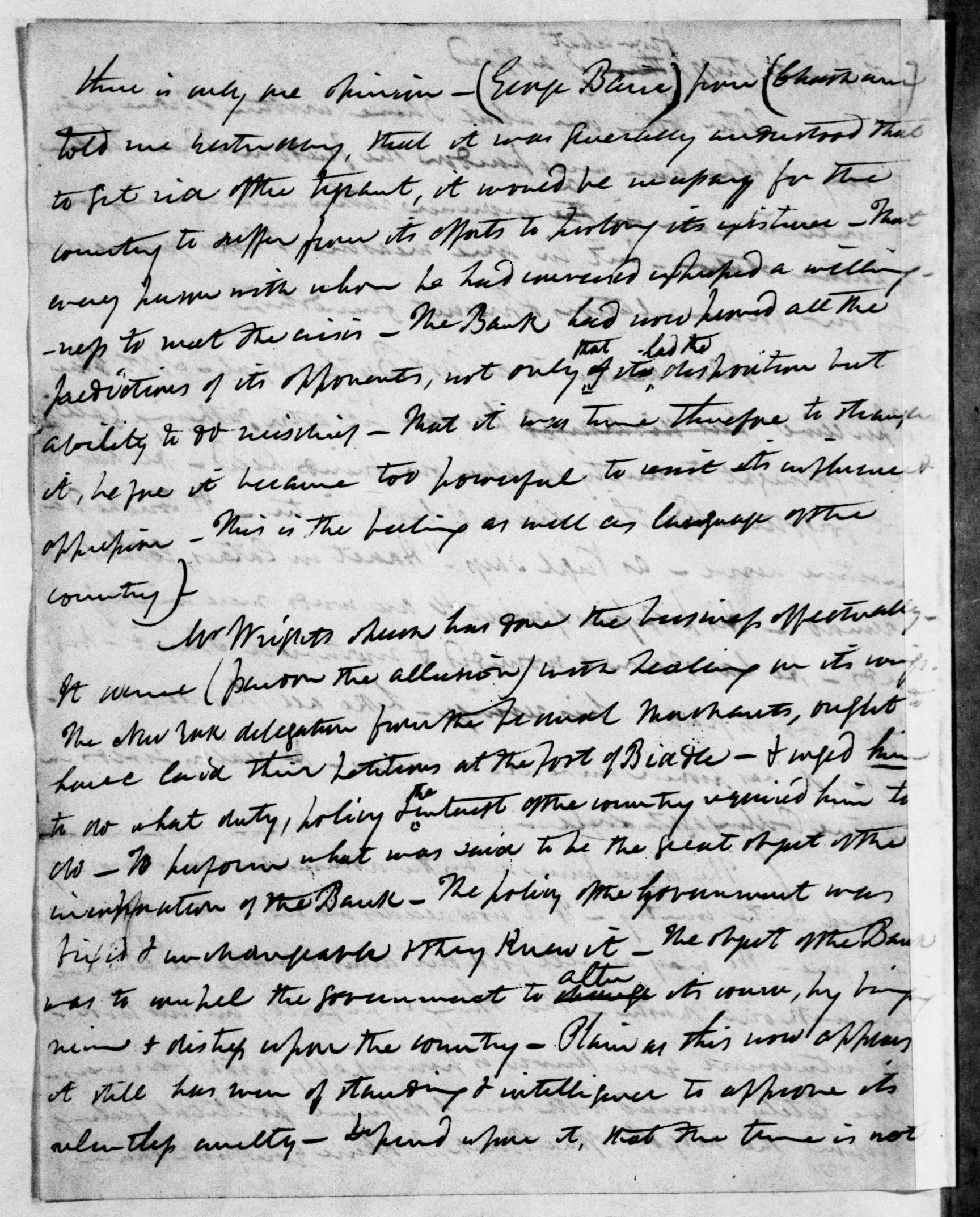 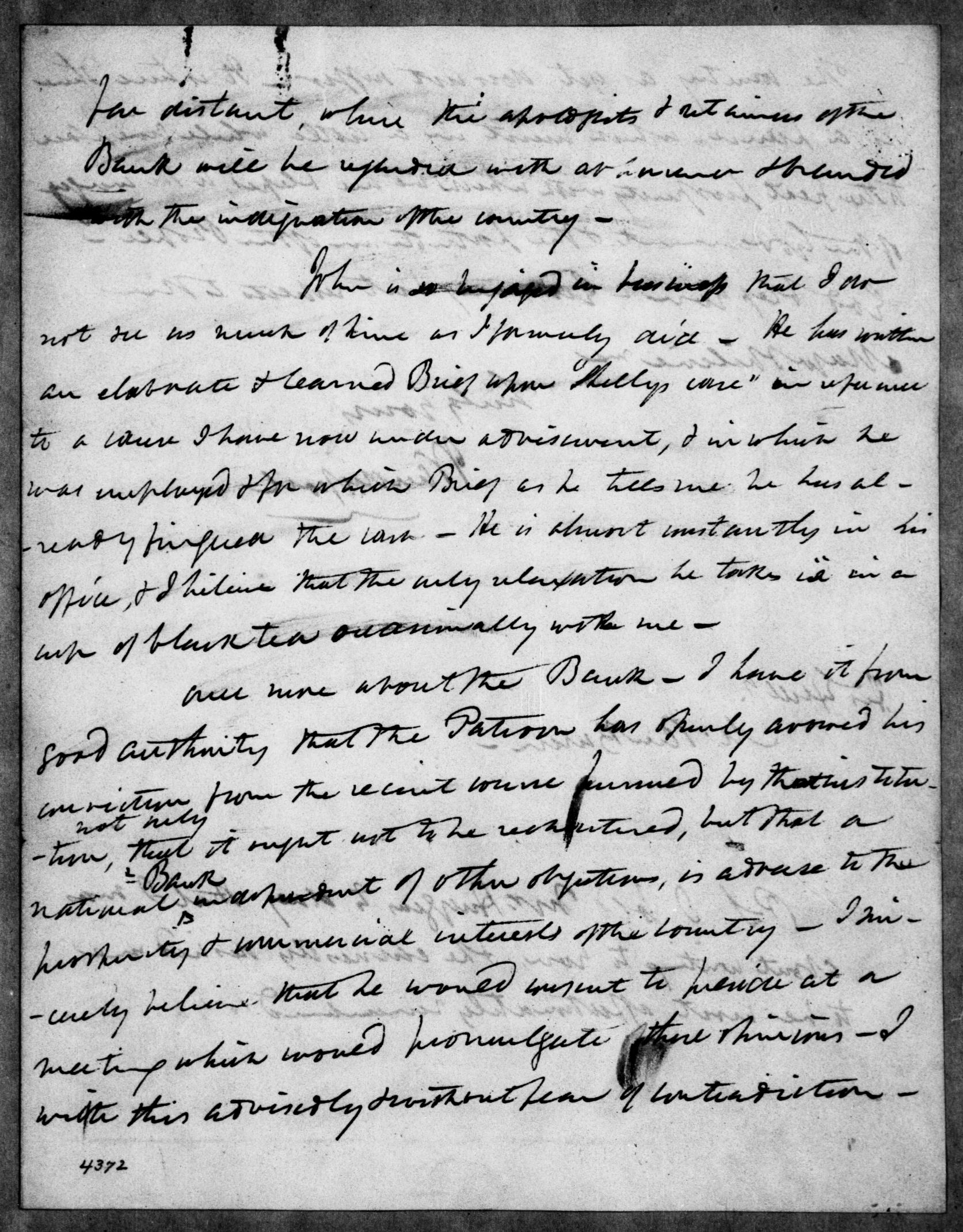 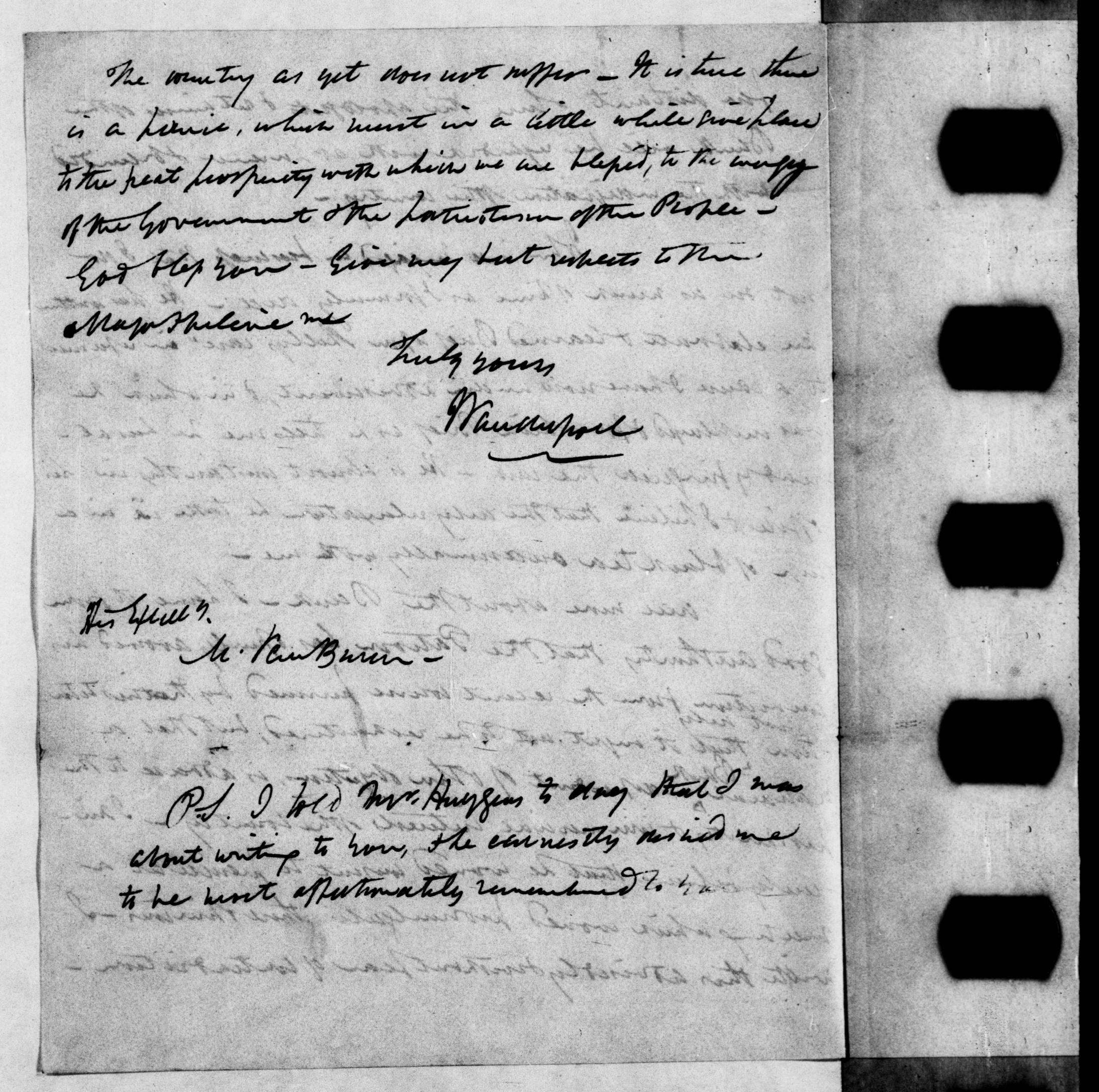 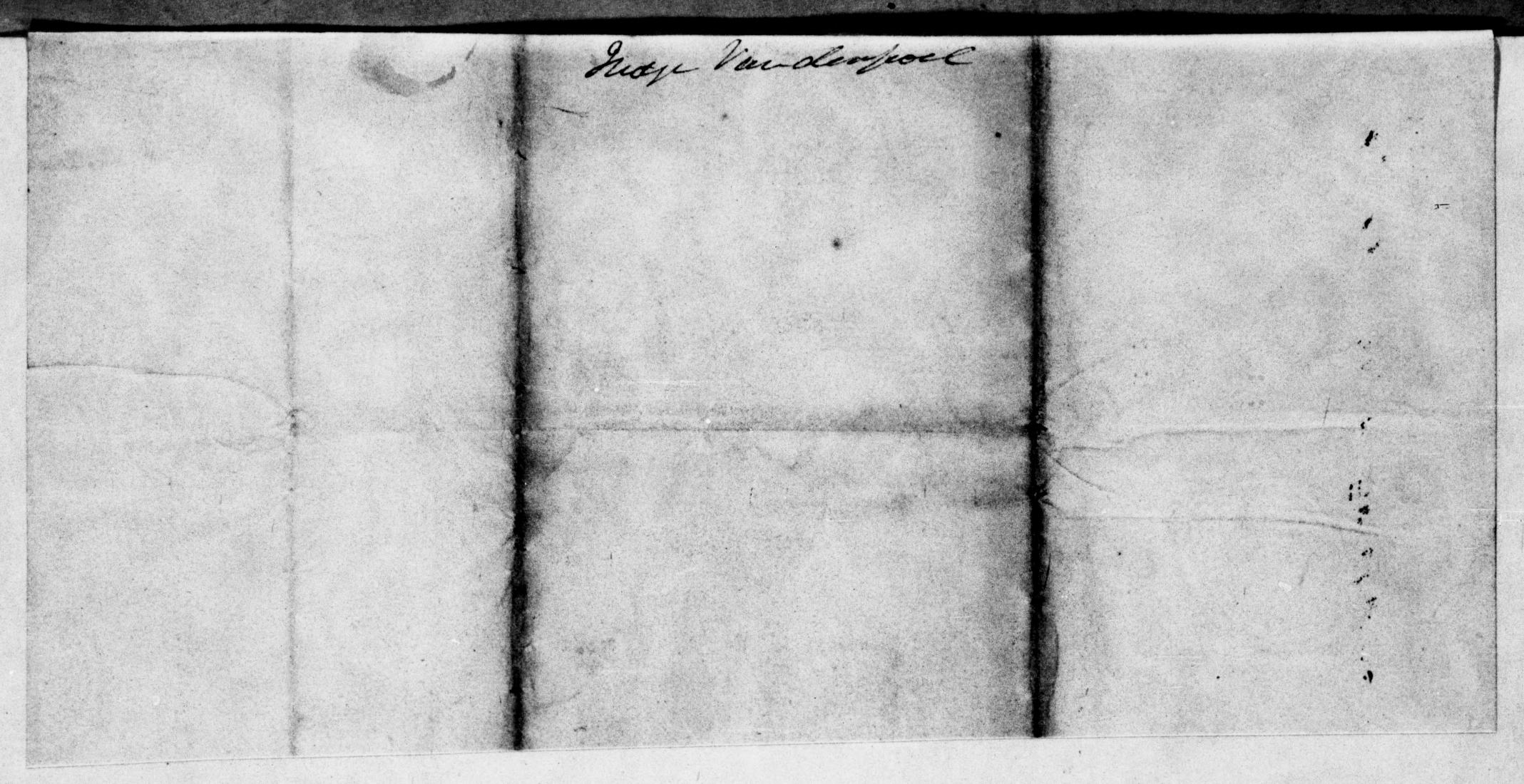