Before this reaches you the committee charged with the memorial from the meeting at Tammany Hall will probably be with you. All Accounts agree that the numbers collected were greater than had ever before assembled in the City on a political occasion. I regretted much my inability to attend it, having been confined to my chamber by severe indisposition for more than three weeks. I had however the document brought to me and gave it my concurrence by my Signature.

The fever created by the pressure on the money market is fast subsiding. The few failures which have taken place, have been principally among gambling dealers in stocks, and a merchant or two who had drawn too largely on their mercantile capital in favour of their investments in real Estate. The extensive Sales of this species of property, and the enormous prices sustained, show no real scarcity of monied capital. The merchants, I understand, have agreed to afford to each other every possible indulgence in the payment of their debts.

I have been not a little surprised to find the speakers on each side in the debate on the removal of the deposits, referring the authority of the Secy. of the Treasury on that subject to the exception contained in the 16th sec. of the Bank charter. In which I think they are altogether incorrect. Exceptio probat regulam is a sound maxim of common law and of common sense but the substitution of facit for probat must be a recent invention, as untrue as novel. The legitimate maxim admits the preexistence of the rule; there could be otherwise no exception. If then the rule existed, where did the authority the exception recognises reside? There only where it could be advantageously exercised, to wit, in the Chief of the executive department, there the constitution placed it, by investing him with a general supervision coextensive with every executive Act; so, there is little doubt, the congress which granted the charter viewed it, and as little that the motive for introducing the exception was to avoid collision with the executive authority. This ground it will be recollected was distinctly assured by Mr. Sergeant when in 1819 he opposed on the floor of the Senate an enquiry into the conduct of the Bank.

Another argument against the creative power of this exception is the improbability that Congress should for a moment entertain the Idea of giving an Authority over the whole impost fund of the Government by an implication to be drawn from a clause in a Contract (if such it may be called) with a Company of money changers and Brokers. The supposition is degrading to the Government.

I am no proficient in the science of political Economicks, nor in that of Banking. The former came into fashion too late in the day for me, and the latter I have had no reason to feel an interest in. I cannot however subscribe to the opinions of those who strive to talk learnedly on the influence of the U.S. Bank in sustaining what they call an uniform and healthful currency. Mr. Webster has undertaken to detail its modus agendi in producing such effect: which fails to carry conviction to my mind. It cannot, in my conception, become an efficient agent for such a purpose while the mother Bank and her Chicks remain perfectly alien to each other as respects the redemption of their paper. This circumstance is as hostile to their unity as if each branch was a perfectly independent local Institution. The State Banks could, by contract form as close a connection. I am too old to place an implicit reliance ^on memory^ but if I mistake not, the bills of the U.S. Bank and its Branches bore an ill odour in 1819, and its Stock was the lowest in the market: I believe at one time down to 82. I do not pretend so much knowledge on the subject, but must believe that an extensive and lucrative commerce will always afford the best security for a Stable currency.

I hope our political friends in the house of representatives will experience no relaxation of nerve. There should be no receding—not even compromise should be thought of. Victory or death should be our motto: that we may not have to fight the battle over again two years hence, when the enemy may be stronger in funds and of course in mercenaries. Should you have any lukewarm brethren among you, send them to catch a spark from the altar of Hickory, where I can but contemplate as a second Cato struggling to shield the liberties of his Country against the attacks of the mammon of unrighteousness. Present him my respects and best wishes that he may enjoy length of years and merited happiness.

Reading the speeches in Congress form my principal amusement in my confinement: but some of them are published in a Type of so small a character as to bid defiance to my Opticks. Is it not probable they will soon appear in pamphlet form?

I cannot conclude without giving you the rumours of yesterday. They are as follows.

1. Mr. Calhoun is said to have declared in a large private Company that there was no longer an administration party in the House of representatives.

2. That the Secretaries of State and of war had resigned.

Firmly relying on a glorious termination to your present and future congressional Campaigns, I with pleasure and sincerity assure you of the Esteem and friendship of

P.S. When Hasslers Assistant are appointed I pray you not to forget my grandson Alfred Livingston 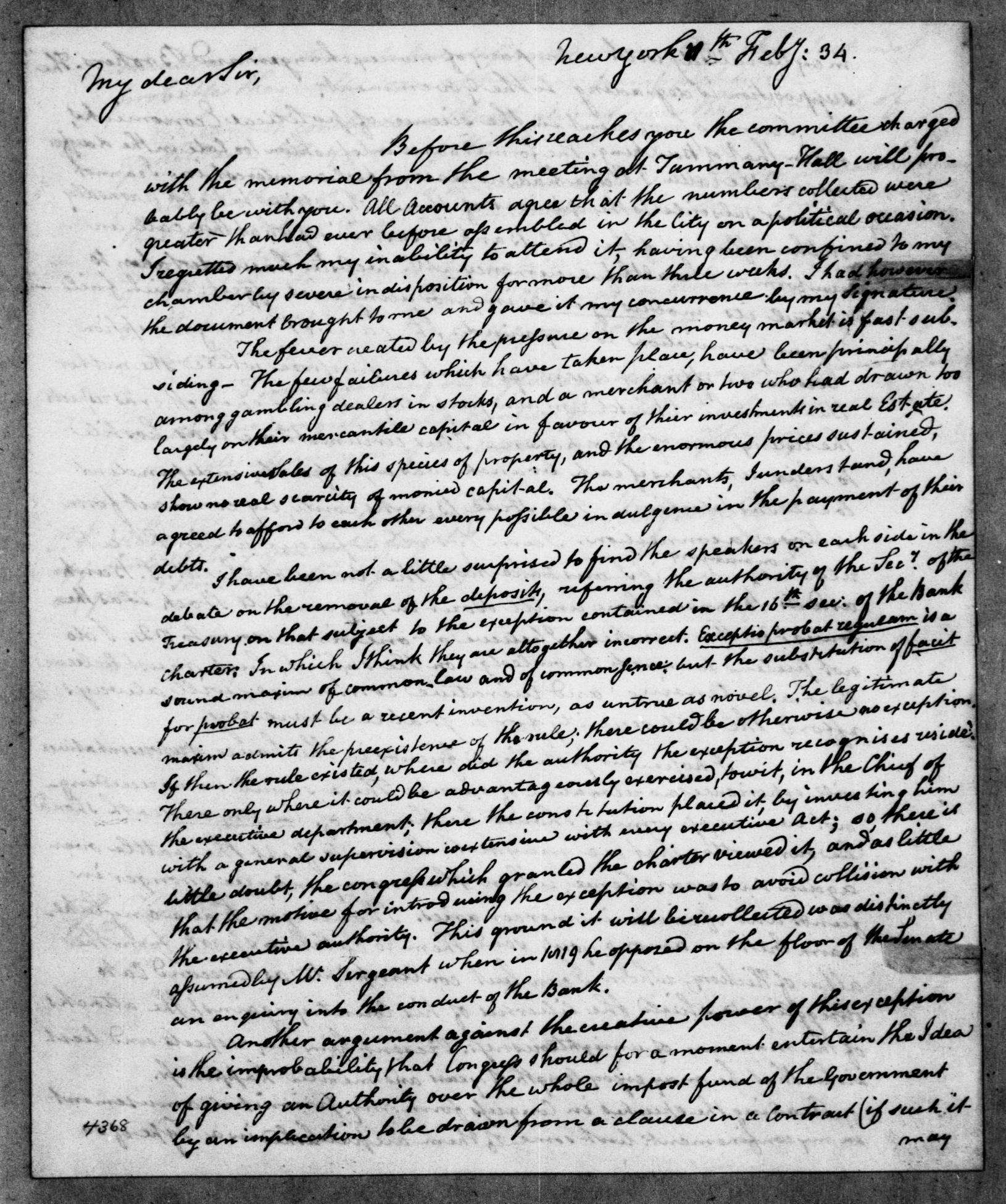 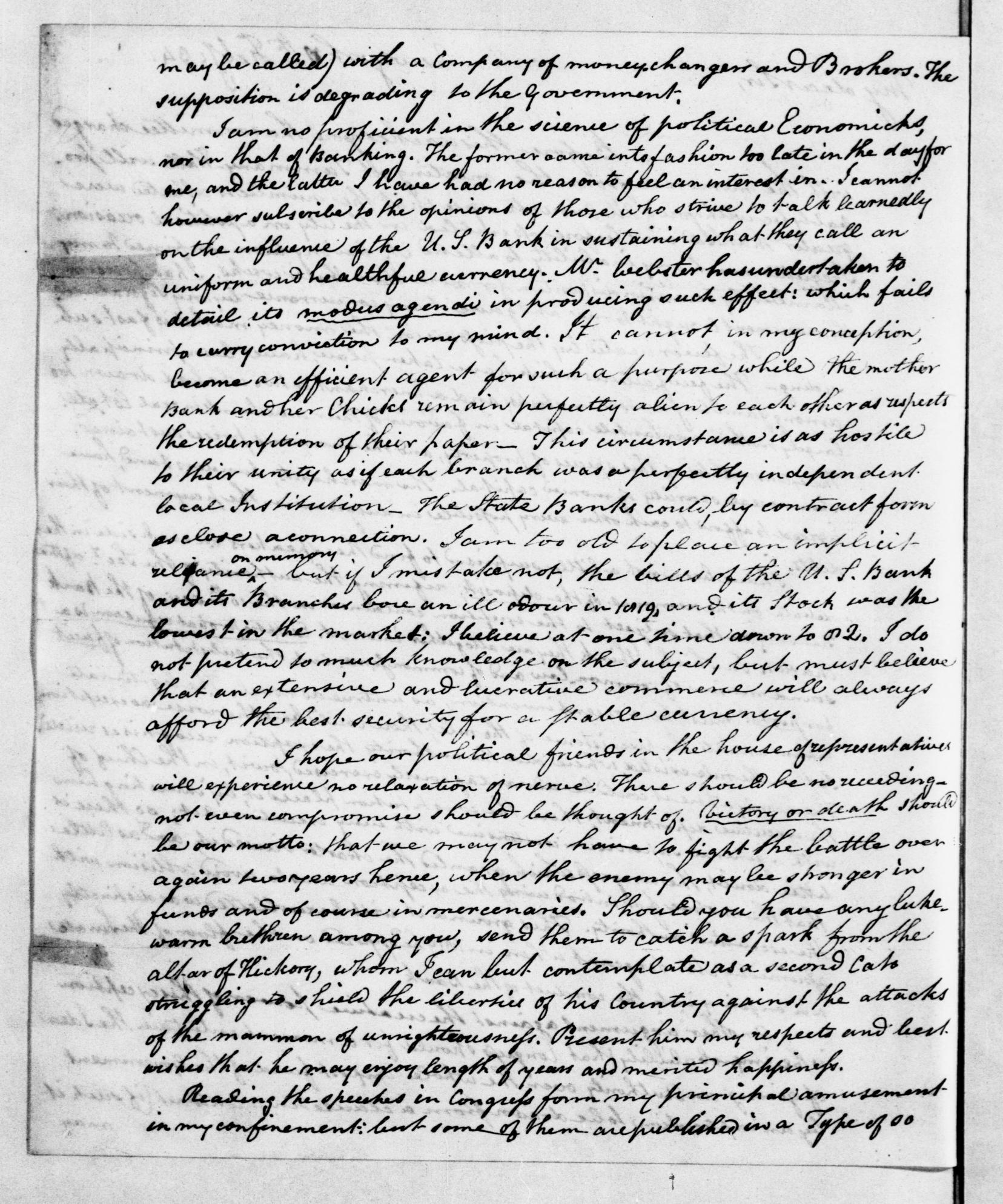 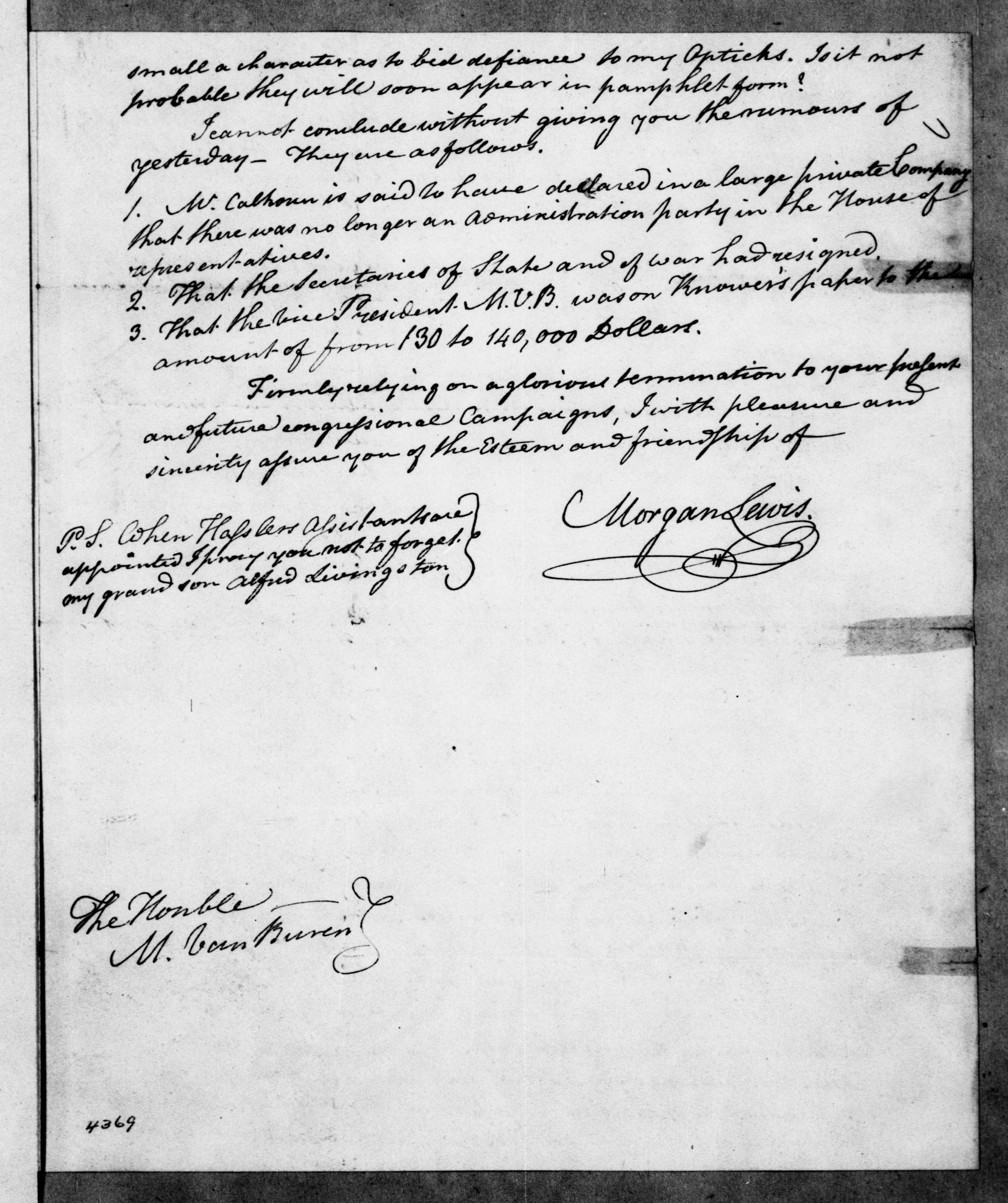 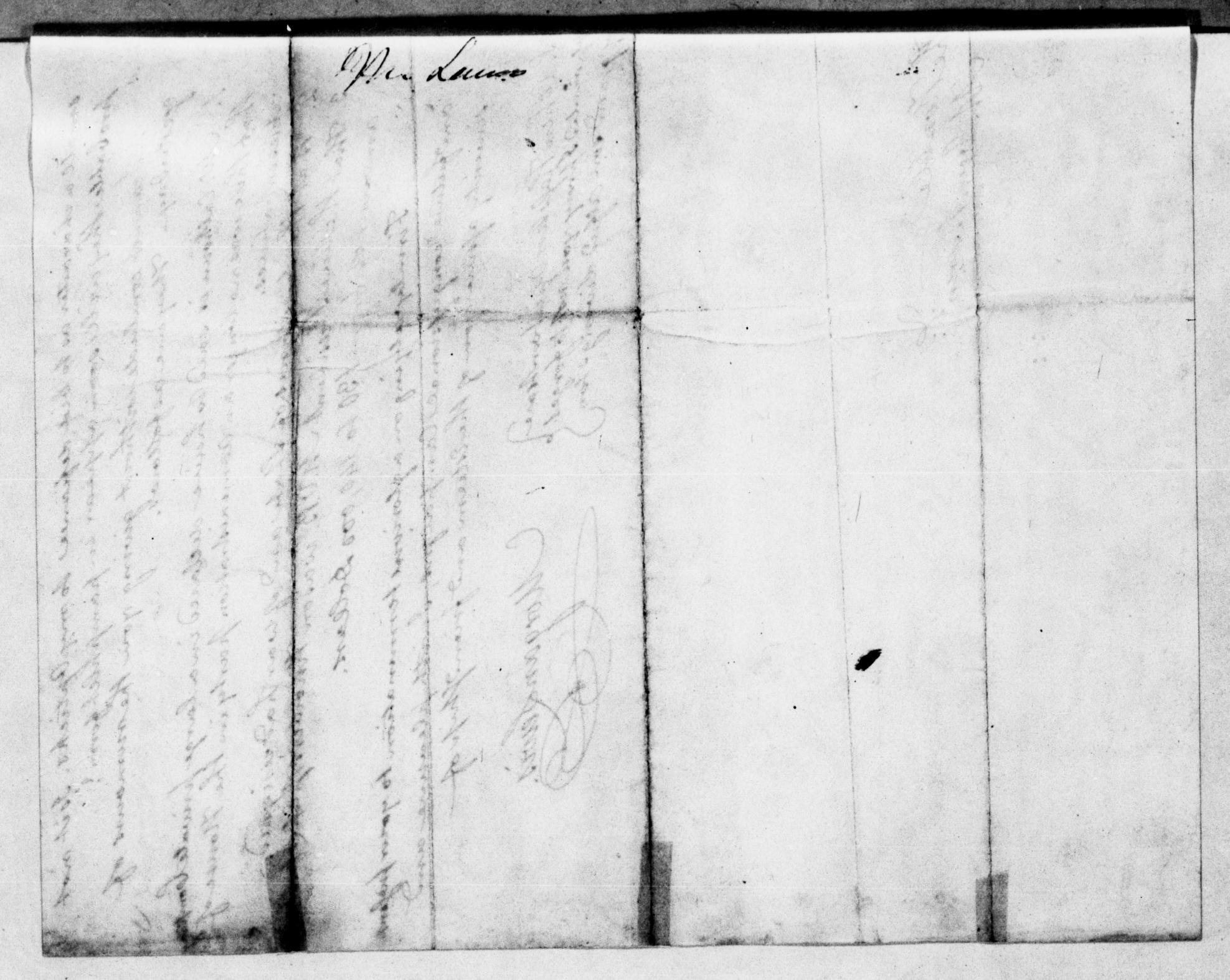