I have recd. & read the letters and recommendations which you inclosed to me, have placed that of the Governor comptroler &c &c of Newyork on file & agreeable to your request, now herewith, return you the others.

I have read Col. H. with attention, he is in a panic. The object of the friends of the Bank in congress is delay, & this I told our friends from the first, time to get up meetings & memorials & to let the U.S. Bank turn its screw upon the people, raise a panic in the money markett and by this means alarm the community by ^cries of^ distress that does not exist, and obtain a majority in congress to carry McDuffies resolution. This was seen by every man of common experience, but the itch for speaking selfish views, were too strong to adopt prompt measures for the public weal. I am not in any panic. Were all the worshippers of the golden Calf to memorialise me & request a restoration of the Deposits, I would cut my right hand from my body before I would do such an act. The golden calf may be worshipped by others but as for myself I will serve the Lord. I would not be astonished that Mr McDuffies resolution would be carried. The course of the friends of the administration is playing precisely into the hands of the opposition, and Why discuss it now. Why not have the facts reported by the committee then it must be discussed before the committee of the Whole on the State of the union. The opposition have every thing to hope from delay, every engine of corruption is at work and our friends are indulging them with time to carry their corruption into effect. My Dr Sir I am mortified at the game played by our friend[s] It is a time serving temporising policy that destroys [. . .] it, and well calculated to loose that majority who would have been united by prompt vigilant & energetic measures at the commencement of the session

If it is much longer postponed you may rest well assured that a panic will be introduced into congress that will have a most pernicious effect. It will create a pretext for all those who are only confined by their pledge to their constituents, to vote for a restoration of the Deposits and may be the cause of giving two thirds against my veto. Think of this & say to your friends how much has been, & how much may be lost by further delay in taking this question, and to cease debate for the present & take the vote on the resolution. It is the doubt that is placed before the public mind that favors the cry of panic which, a negative ^vote^, will at once put down. 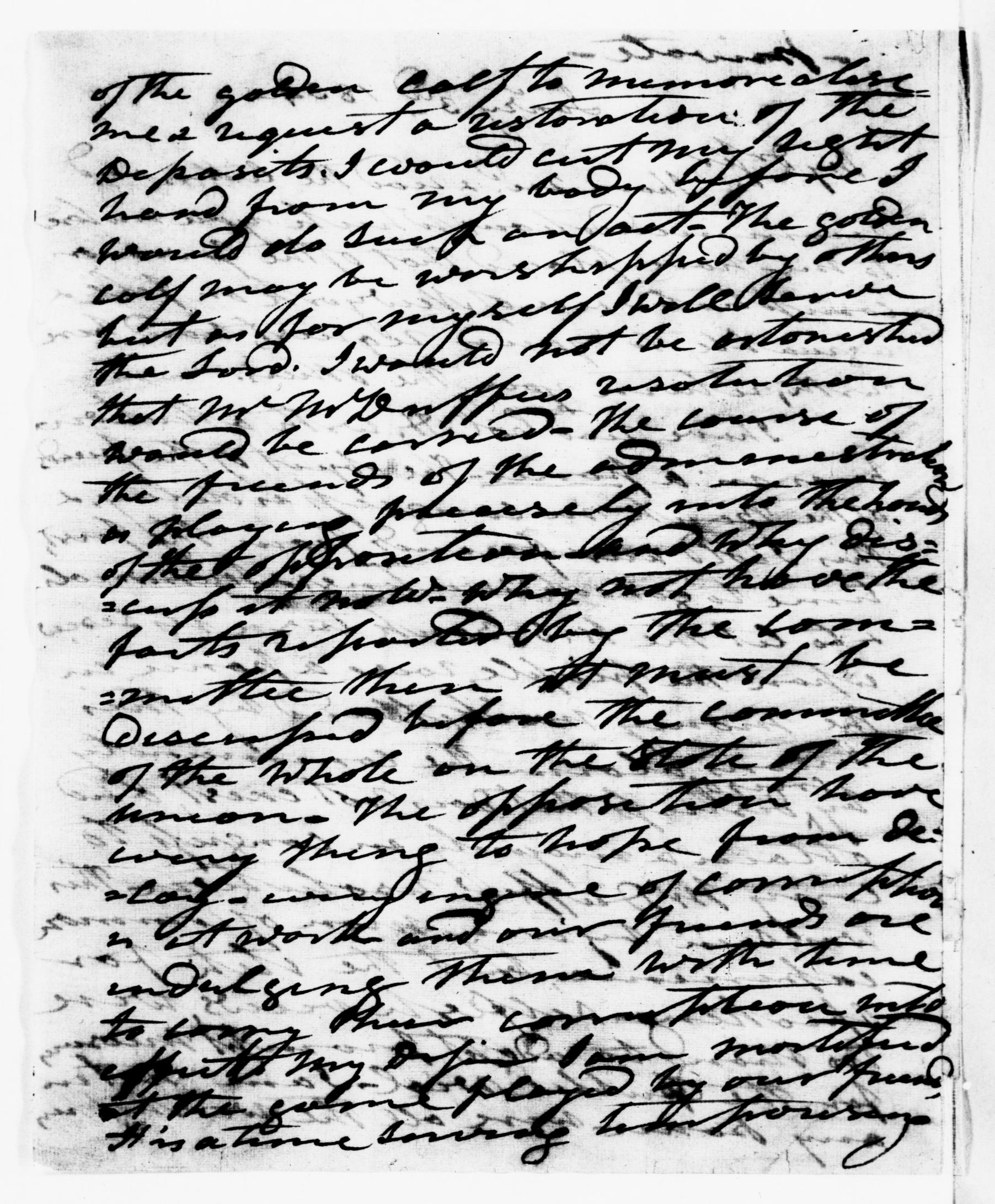 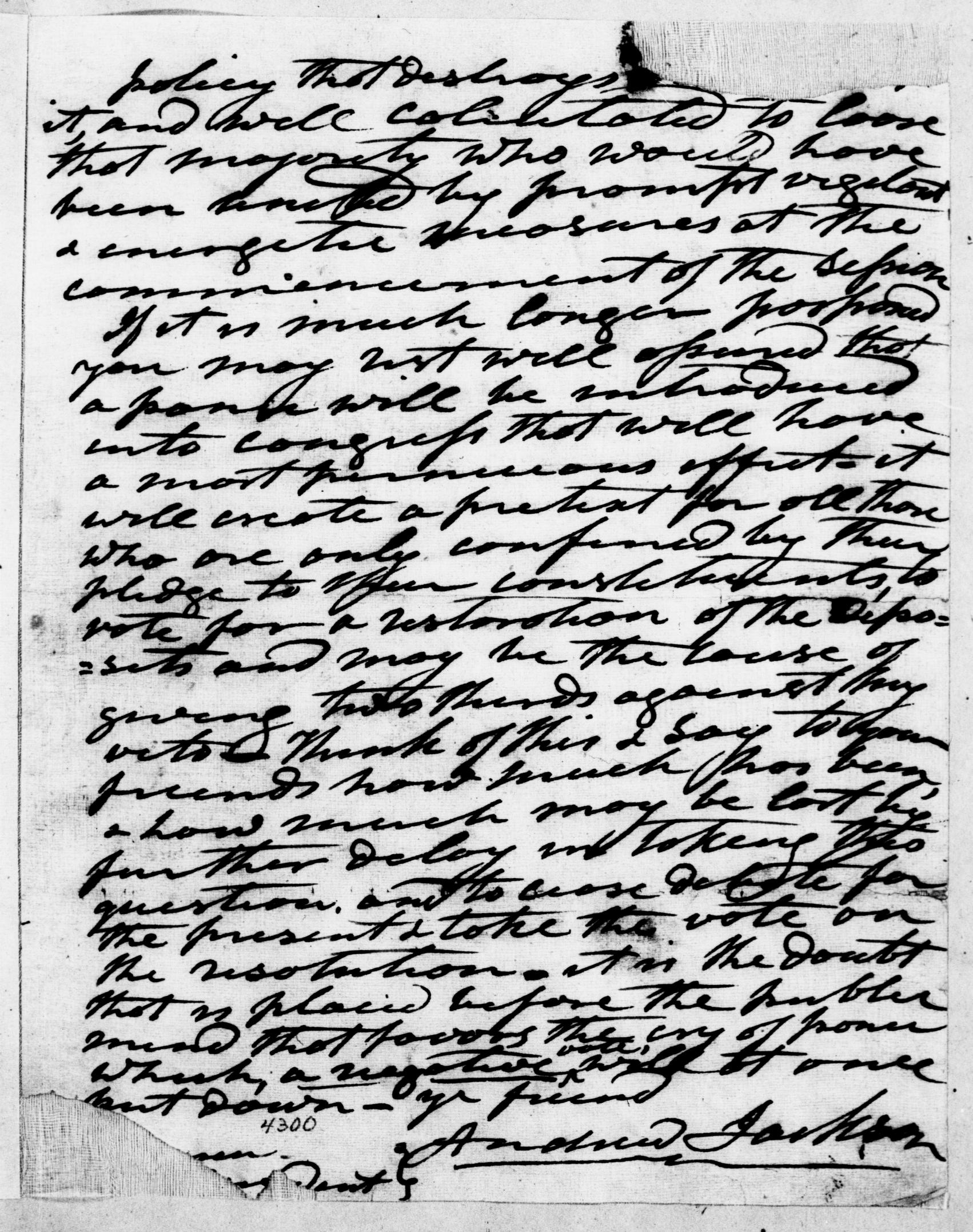 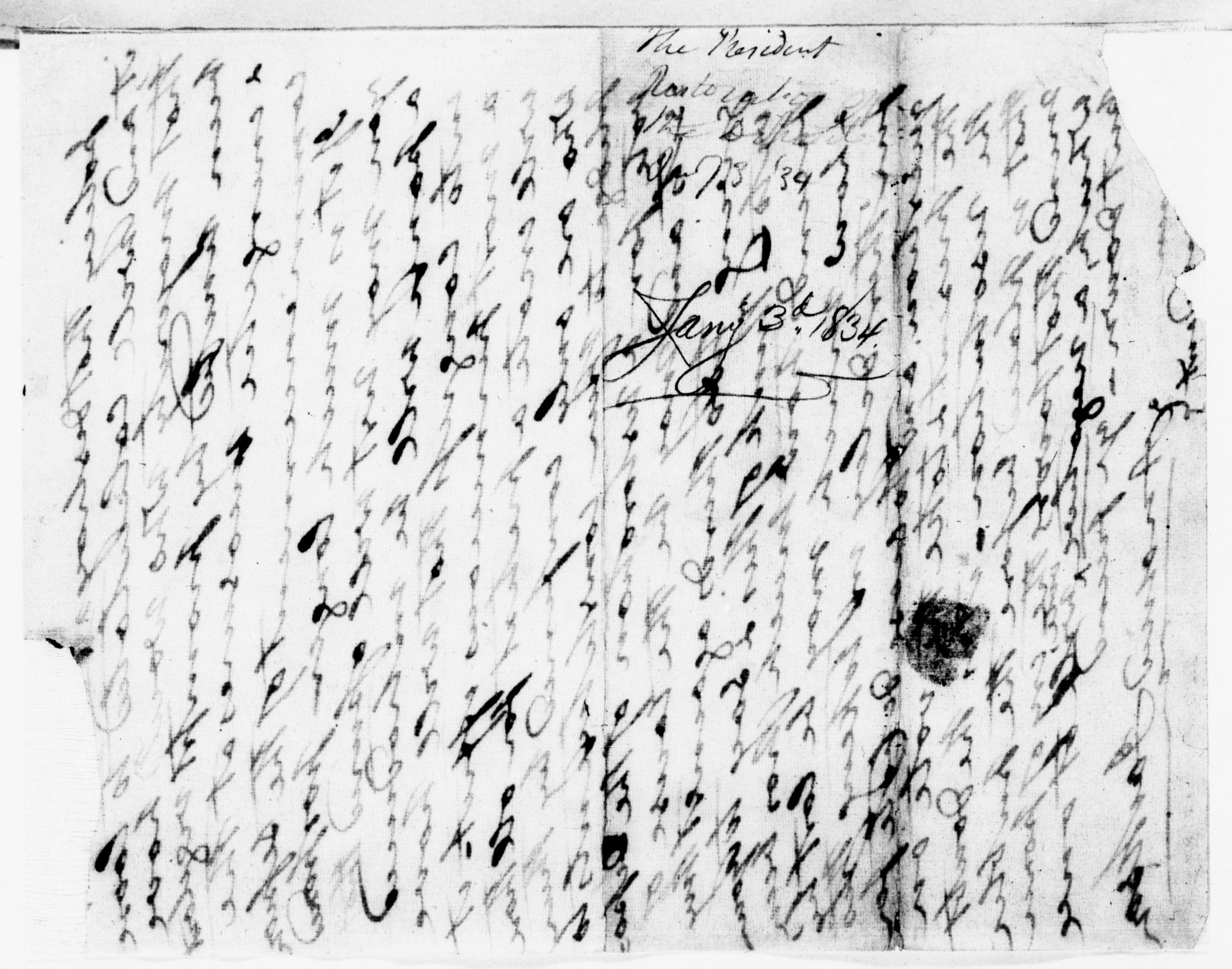 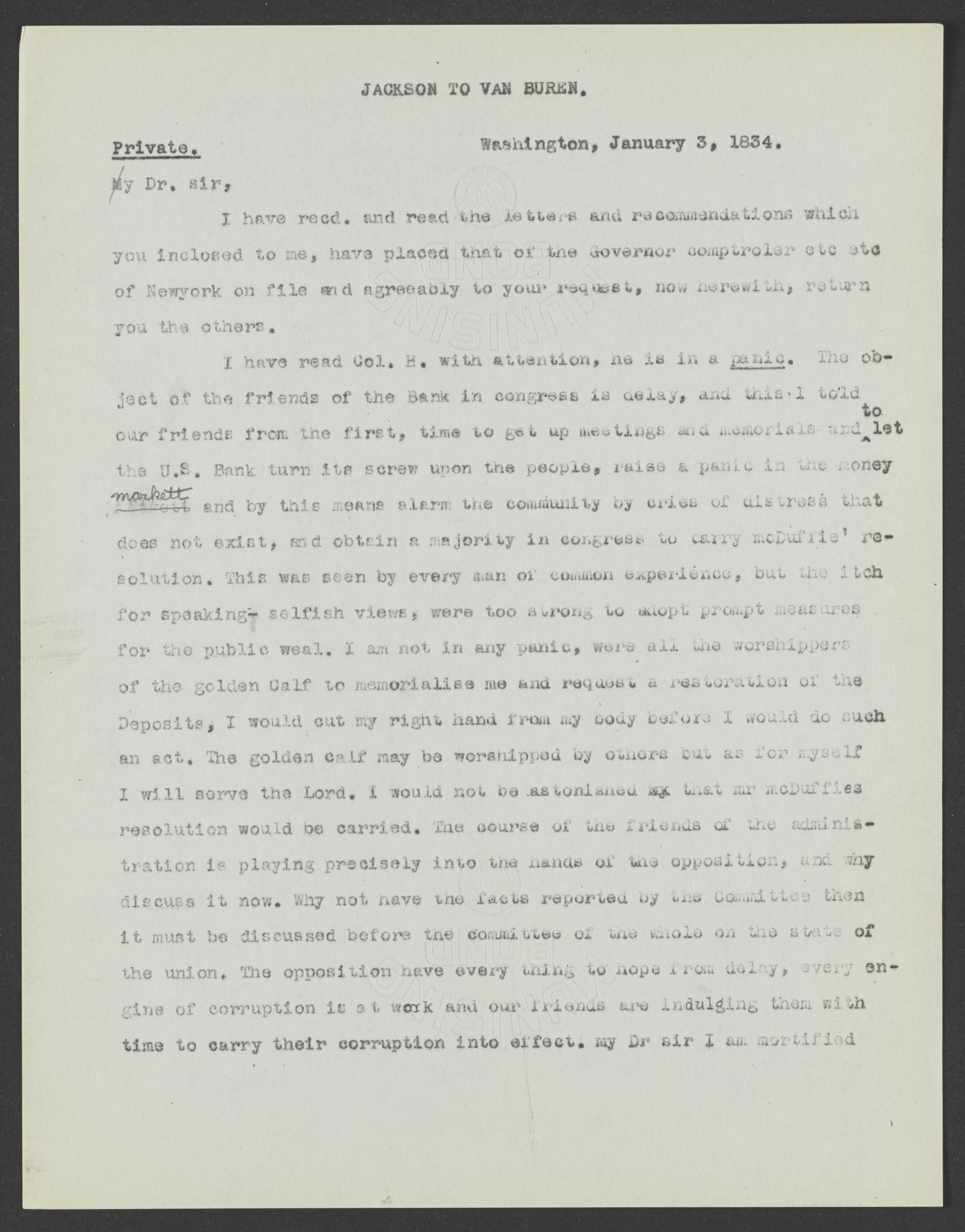 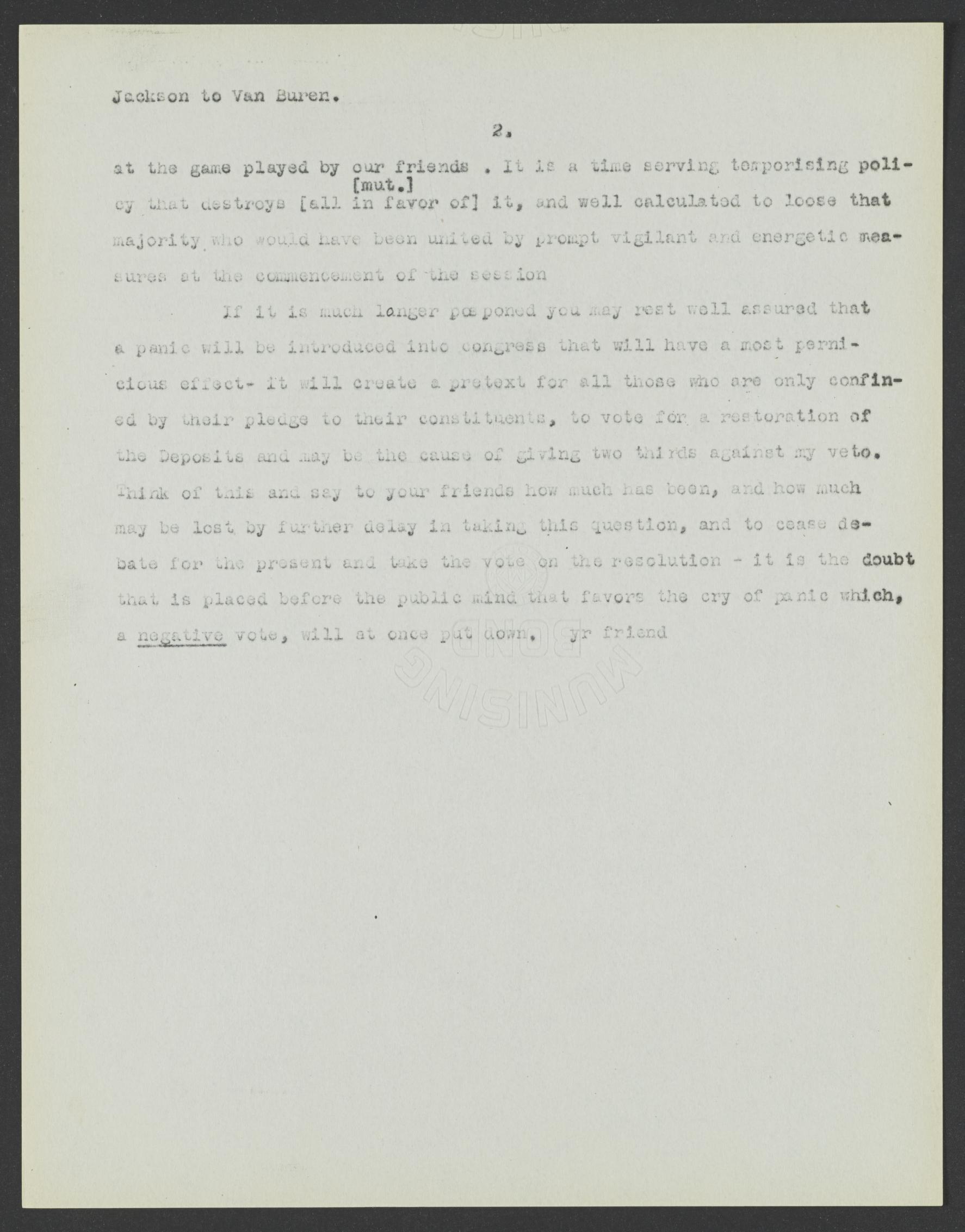