Altho the Boat rocks dreadfully I have determined to write you half a dozen times that I may dismiss a disagreeable subject from my mind. I was not surprised by the disclosure you made to me at McLanes. It is totally <incompatible> with the letter received from the Genl. at the breaking up of his first Cabinet & what I always supposed was suggested by you & intended to prevent me from feeling that I had been unjustly overlooked. I had a right to expect not to be a second time passed over. Yet I did expect ^it^ notwithstanding the convictions of my personal & political friends to the contrary. I see now that I was distinctly correct in my impression about your letter of last winter; it was not lost upon me. The Effect of this second neglect cannot fail to do me injury at home, where my strength in some measures depends upon the belief that I have <friends> at the seat of Govt. I should like to understand one thing, is there a fixed policy in the administration to keep all southern men out of the Cabinet? There is not a man in the Country not of the <initiated> who does not look for the appointment of some one south of the potomac (whenever a vacancy is produced by the removal of <Livingstons>) to one or other of the Departments. The <time> <of> L., & his departure is another matter which will renew complaints heretofore made with no little show of justice. The unnecessary departure of foreign ministers during the recess of the senate is abominable & when it can be traced to <illegible> of more personal convenience is atrocious. I wish you to understand distinctly that on this point I have gone further in the Senate to sustain the President than I will ever go again. My aid will be probably not as much wanted as it has been & of course you will not consider the mere <communication> of a fixed resolution <intended> as a menace. Did I intend to do injury I should not give warning. You seemed surprised that I should think of the Russian mission. The only question is whether my retreat is not better than remaining in the Senate inactive & useless which I shall be, to see allusions made to the <illegible> <illegible> & hear myself abused at home for a silly simpleton who had not <illegible> to secure his one position of the spoils of victory. If the publick knew how carefully I had abstained from all the means usually employed by expectants & aspirants I would be content. That cannot be known unless I tell my <own> story & then I should not deserve belief as I should degrade myself by playing my own trumpeter. On the whole then I shall consider the Russian mission as offered in good faith & shall claim it as pledged <as> time & occasion serve, it being always in the <illegible> to postpone the performance ^of the <illegible>^ by keeping Buchanan in St. Petersburg. I have in truth <such> strong <notice> for wishing to go abroad again that I may be able to satisfy our European friends that it is possible for a <illegible> minister to have the manners & look of a Gentleman, a matter I should think in Russia, at least, by this time a little doubtful. I shall do <nothing> by this course, <falsify> ^in some <occasion>^ a prophecy of Tazewells who told as I passed on to Washington he knew the administration never would give me honorable employment. 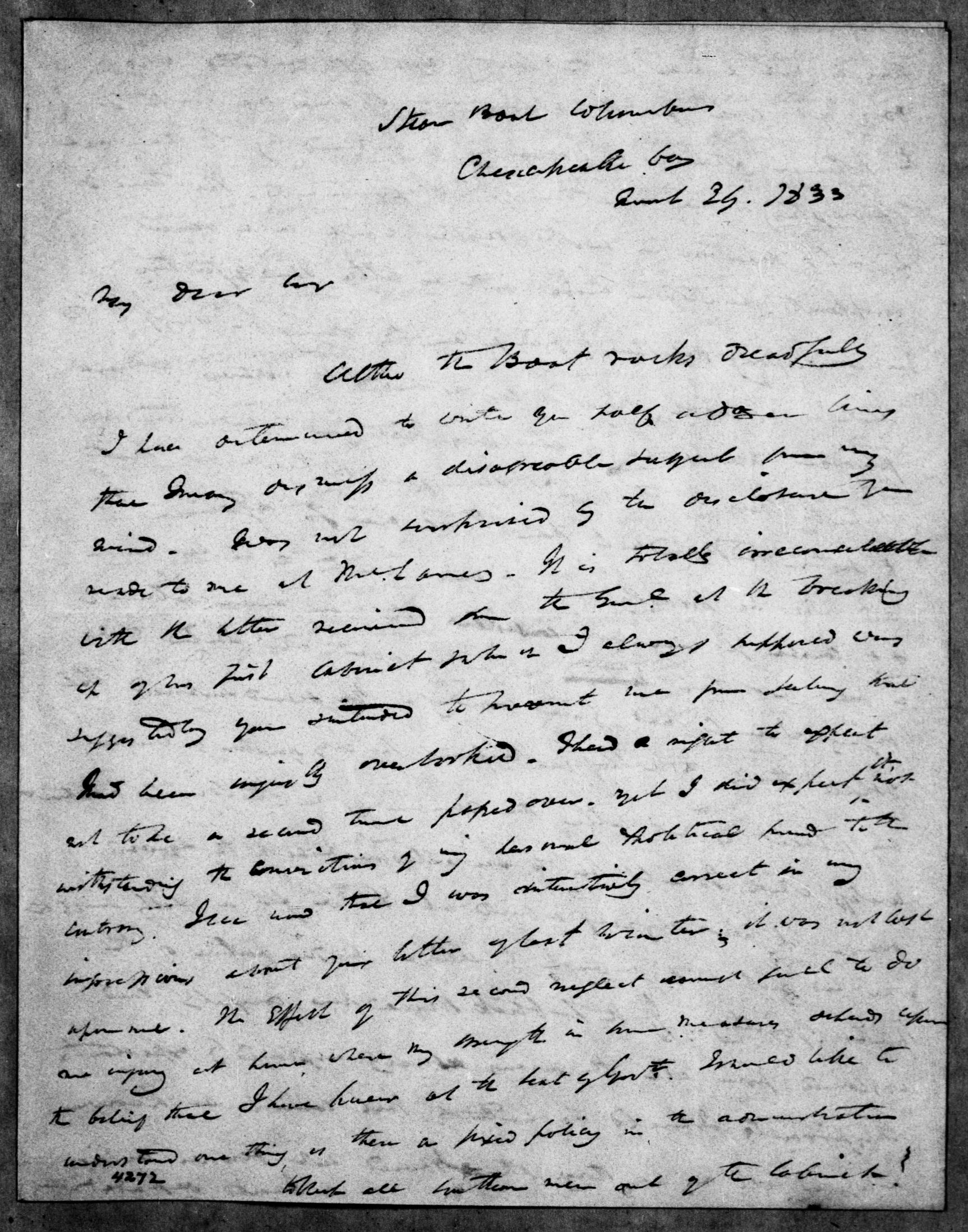 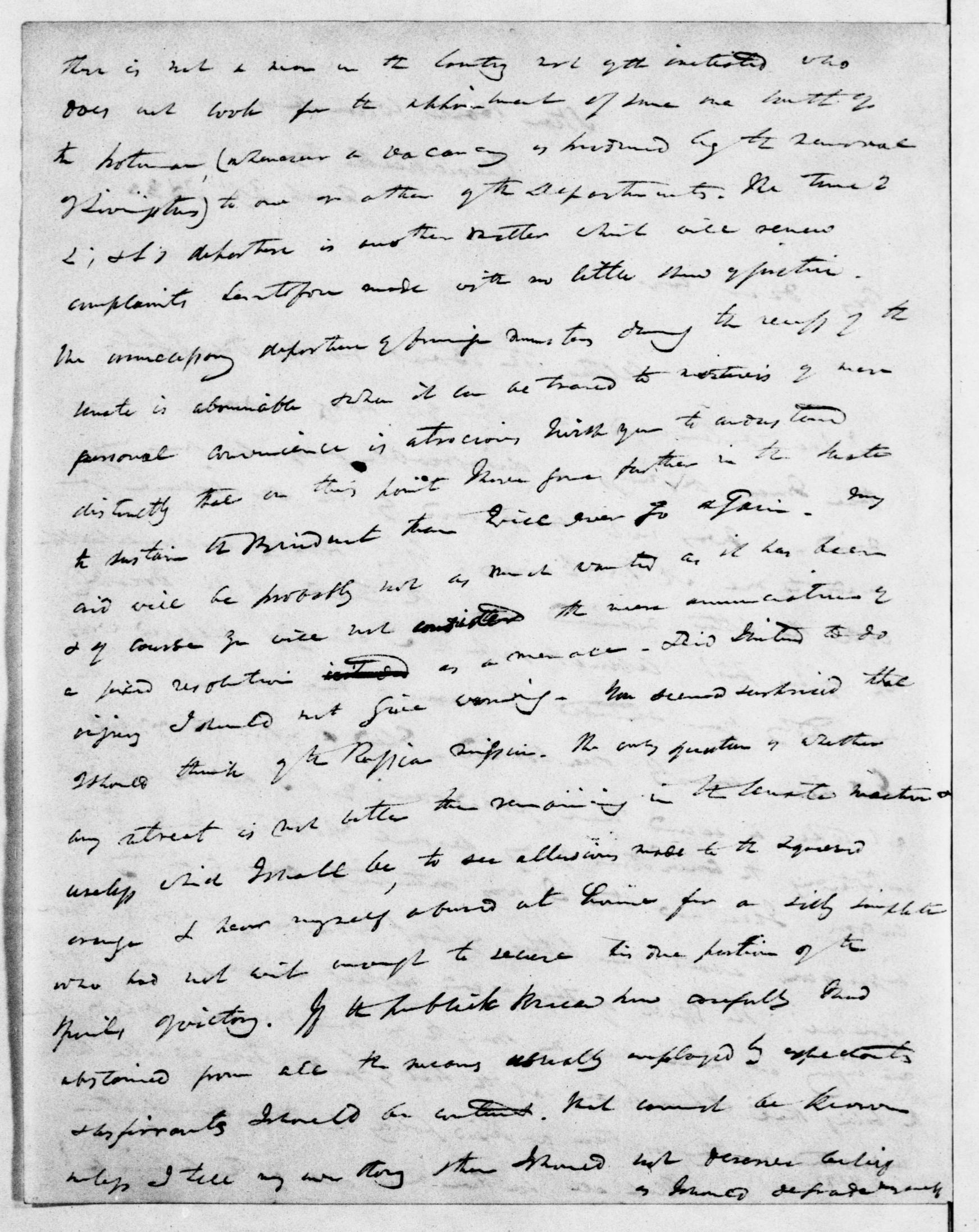 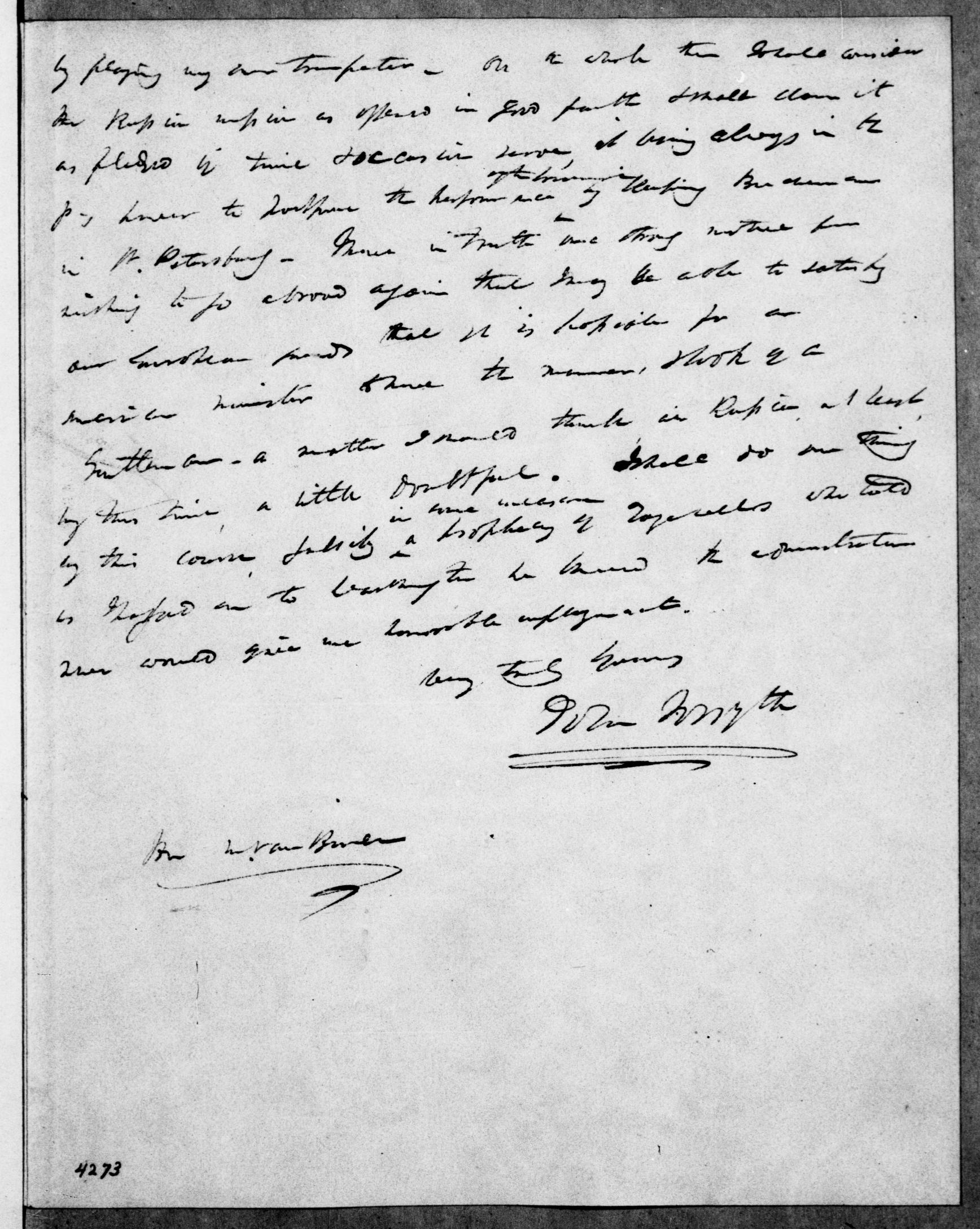