Your very kind letter on the 2nd instant was received yesterday, but the accumulation of business on thursday, <illegible> ^from^ my absence from my table on that day, accompanying my son, daughter, & little babe, a few miles on their way to the Hermitage where they will spend the next winter, prevented my acknowledgement of it.

We have got the Bank in Baltimore Philadelphia NewYork & Boston perfectly under check mate. Biddle finds himself precisely in the situation that Genl Hamilton and his conullies found themselves. The Genl thought he would possess the fortresses magazines, & arsenals & became bold with this hope in his immagination, but behold, when he made the move he found the fortresses well defended, the magazines secured. Just so with Mr Biddle, he had all his plans laid to destroy the state Banks and oppress the union by bringing down upon every section of it ^at once,^ a pressure in the money markett. He made a shew of his hand & views; first in Newyork, & Baltimore, by rejecting their own Branch notes as credit to the state Banks & sending them instantly back. An interview immediately by the president and director of the state Banks, was the first intimation of their being in check. They directors begged time untill this day to give an answer whether they would not receive & cash all their Branch paper received by the state Banks. If the answer in the negative, then one million & a half of coin will be taken from their vaults in Newyork in an hour, &c&c. until all is secure. We act solely on the defensive, and I am ready with the screws to draw every tooth & then the stumpts. Fear not therefore, for abuse. The more they heap upon ^you,^ the more will the virtuous portion of our country appreciate you. We will, if I mistake not, have Mr Biddle & his Bank as quiet & harmless as a lamb in six weeks, for we extend the preventive system, as fast as safe Banks can be had in every section of the union, so that the State Banks by the deposits may accomodate to the amount that the U.S. Bank curtails. The curtailments by the U.S. Bank will oppress only their own friends, & when done for mischiefs sake only, it will raise up the whole in hostility to it. From this hasty view which I give you, it will be at once discovered that we have nothing to fear. The exposed corruption of the Bank, & improper use of the public money, has, as I was sure would be the case, filled every honest mind with indignation against it, and must rouse the Stockholders at once to denounce it & change its direction, or loose the value of their stock.

I now invite you here. I have my dear sarahs room prepared for you, until your own House can be put in order. I have now only one trouble, and that is my next message to congress. Our Foreign concerns, I hope I can say, are all on the most friendly footing, all our claims upon them amicably settled. At home peace & tranquility and general prosperity prevades the whole country, our commerce flourishing and the revenue more than ample for the wants of the Government. And then, the causes that led to the removal of the deposits ^with a^ forcible, and ^in a^ concise manner, referring to the report of the secretary of the Treasury. This part must be well considered.

I am happy you are to be at the Baltimore Races, from that point I shall expect you here. I have much to say to you when we meet. My health is not good, but I think improving.

My little family now here all unite in kind salutations to you. 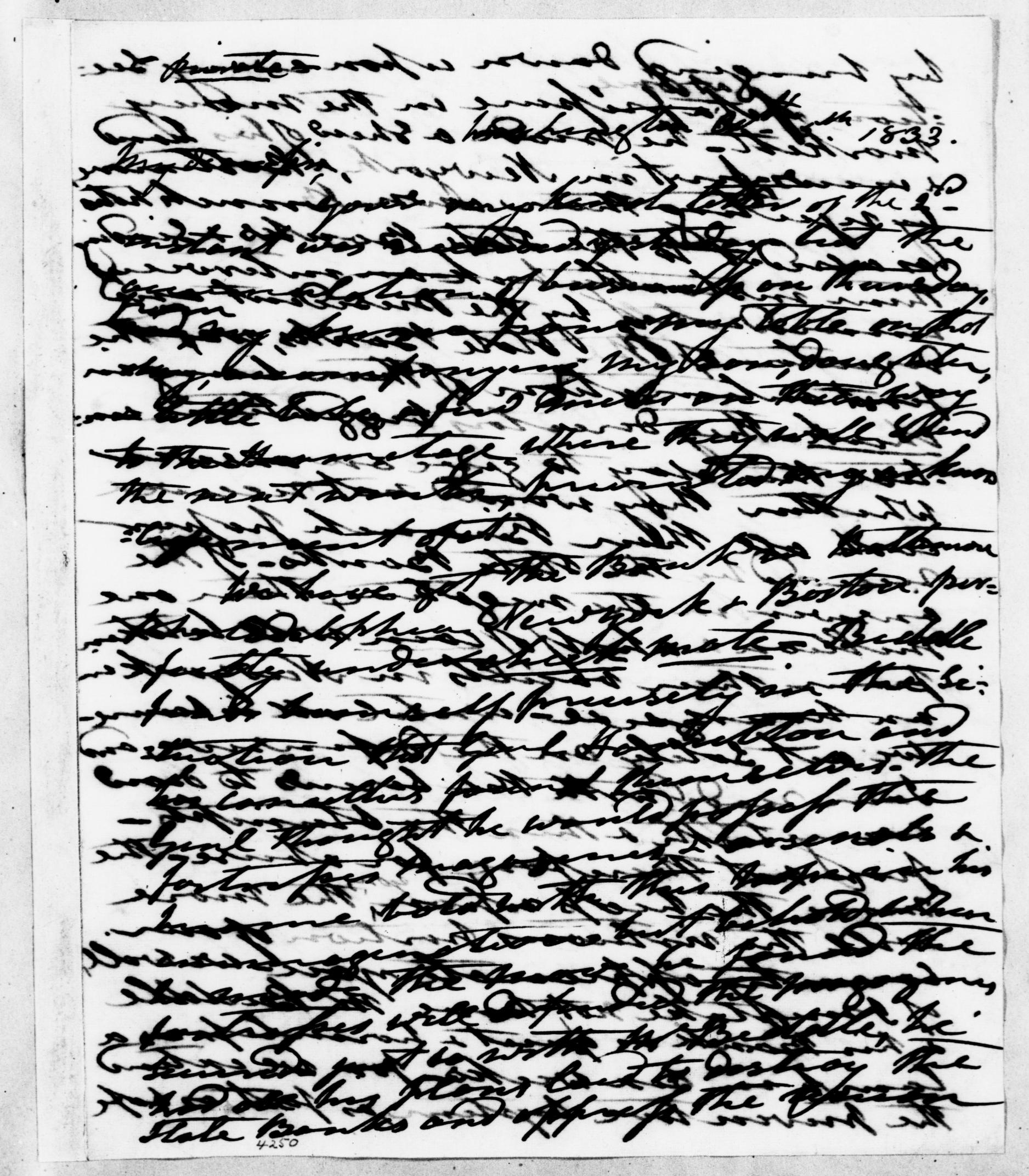 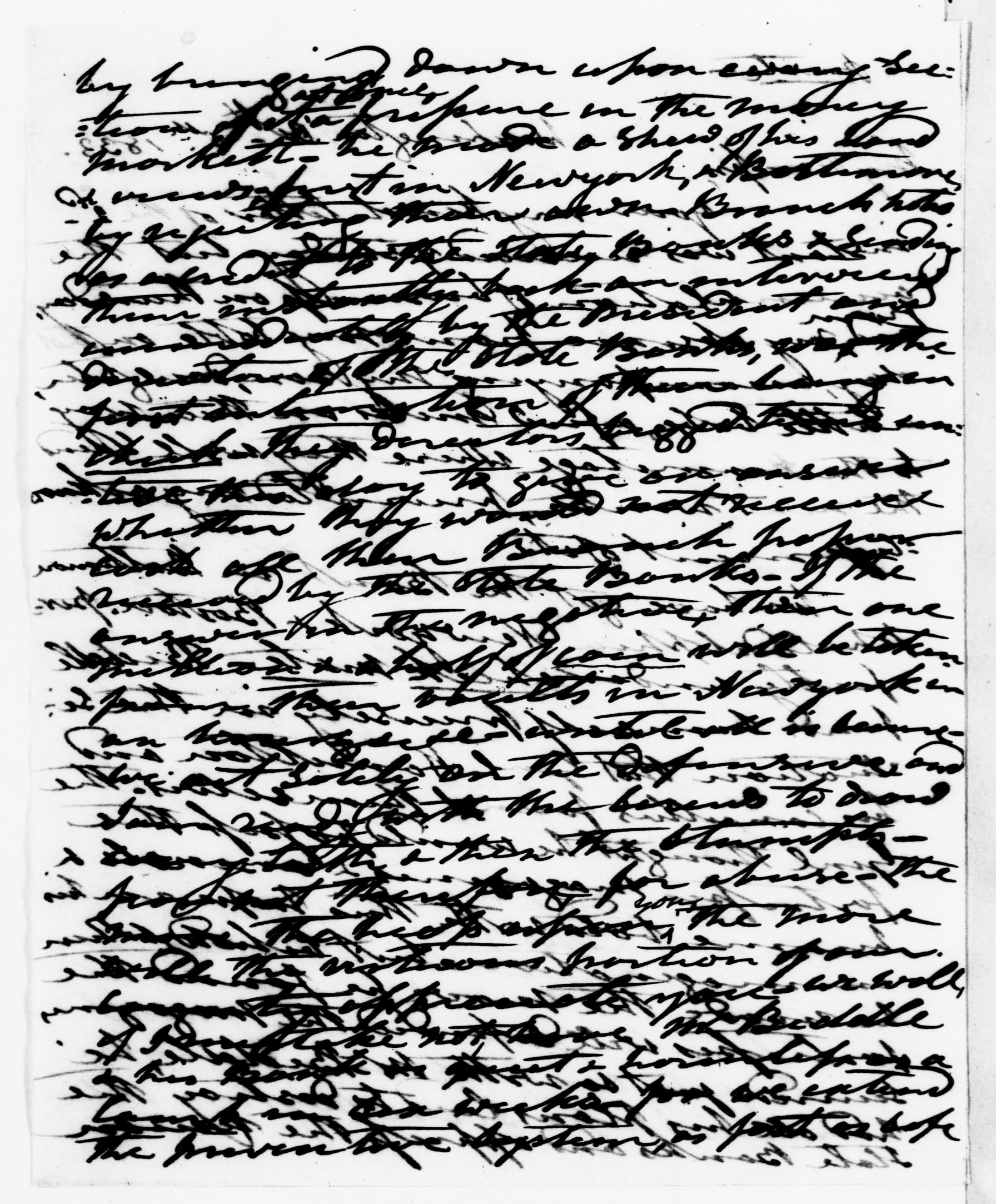 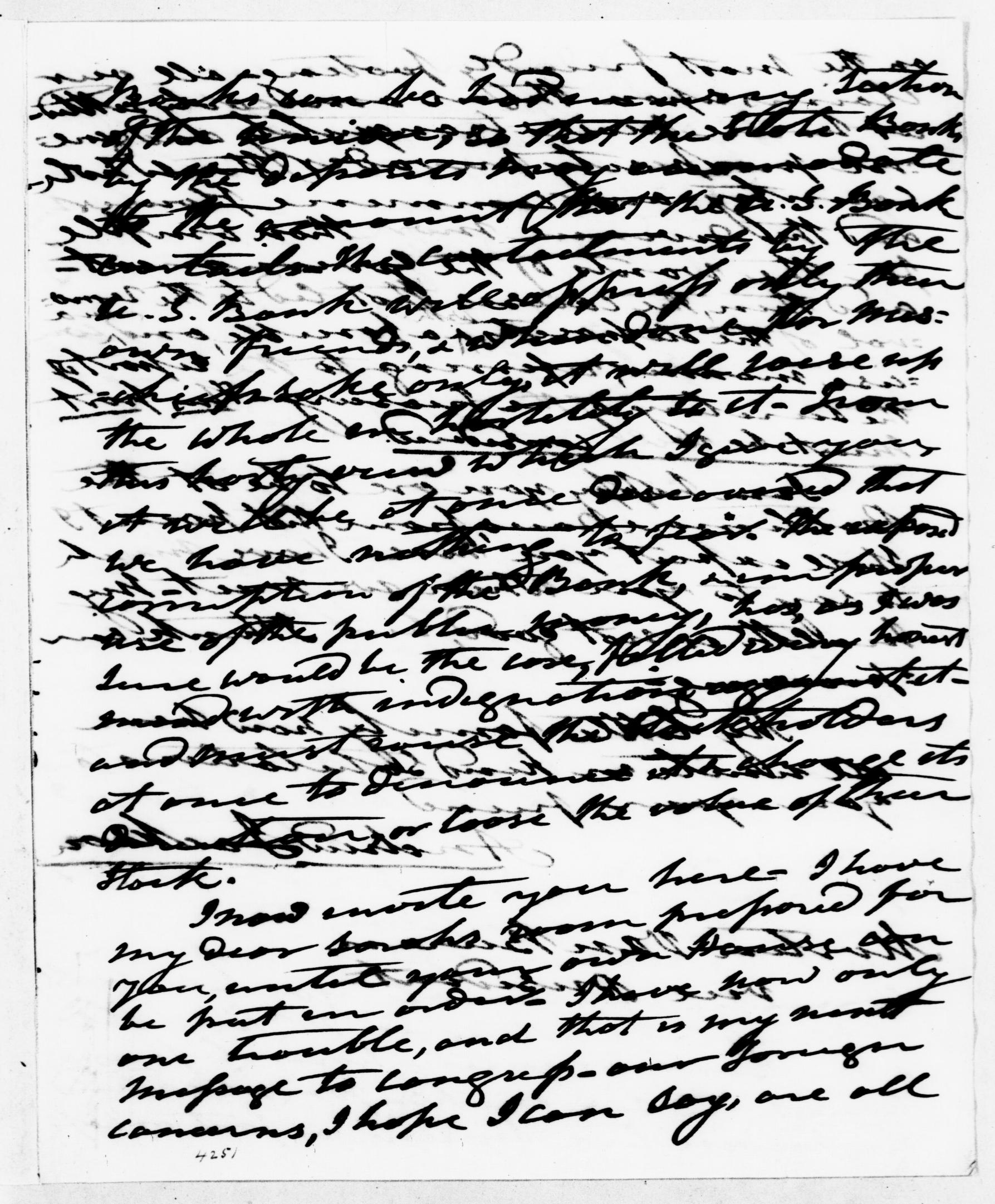 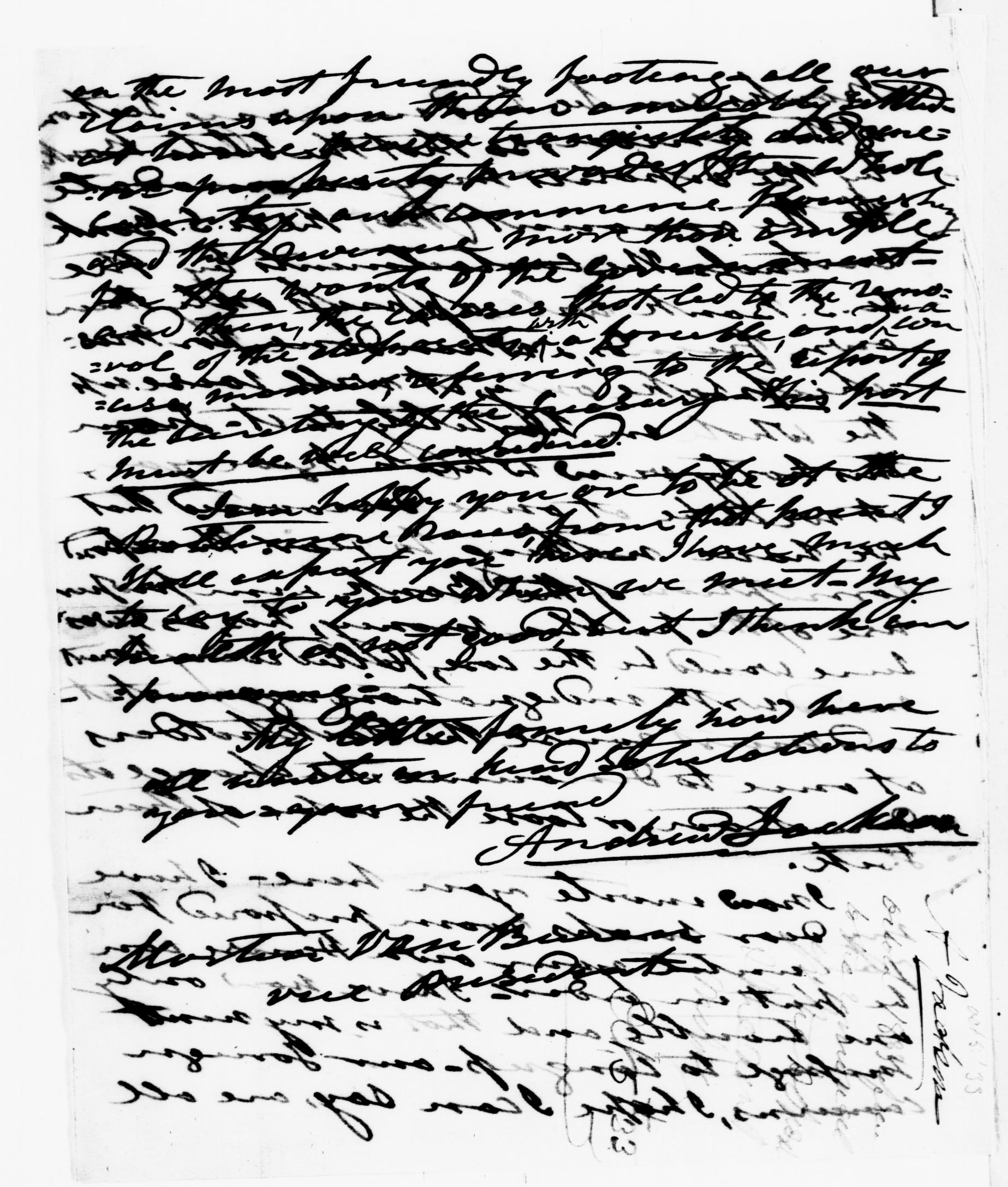 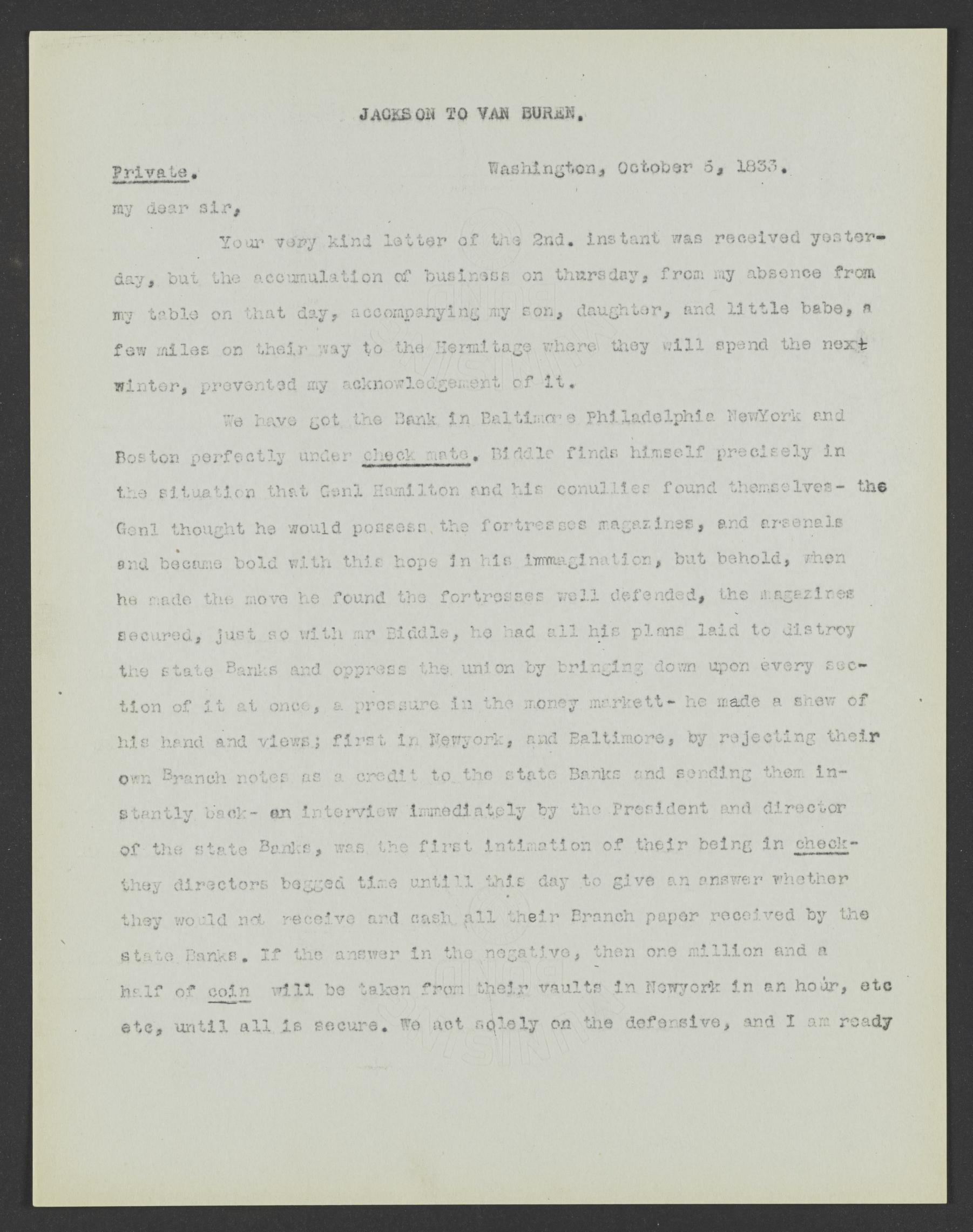 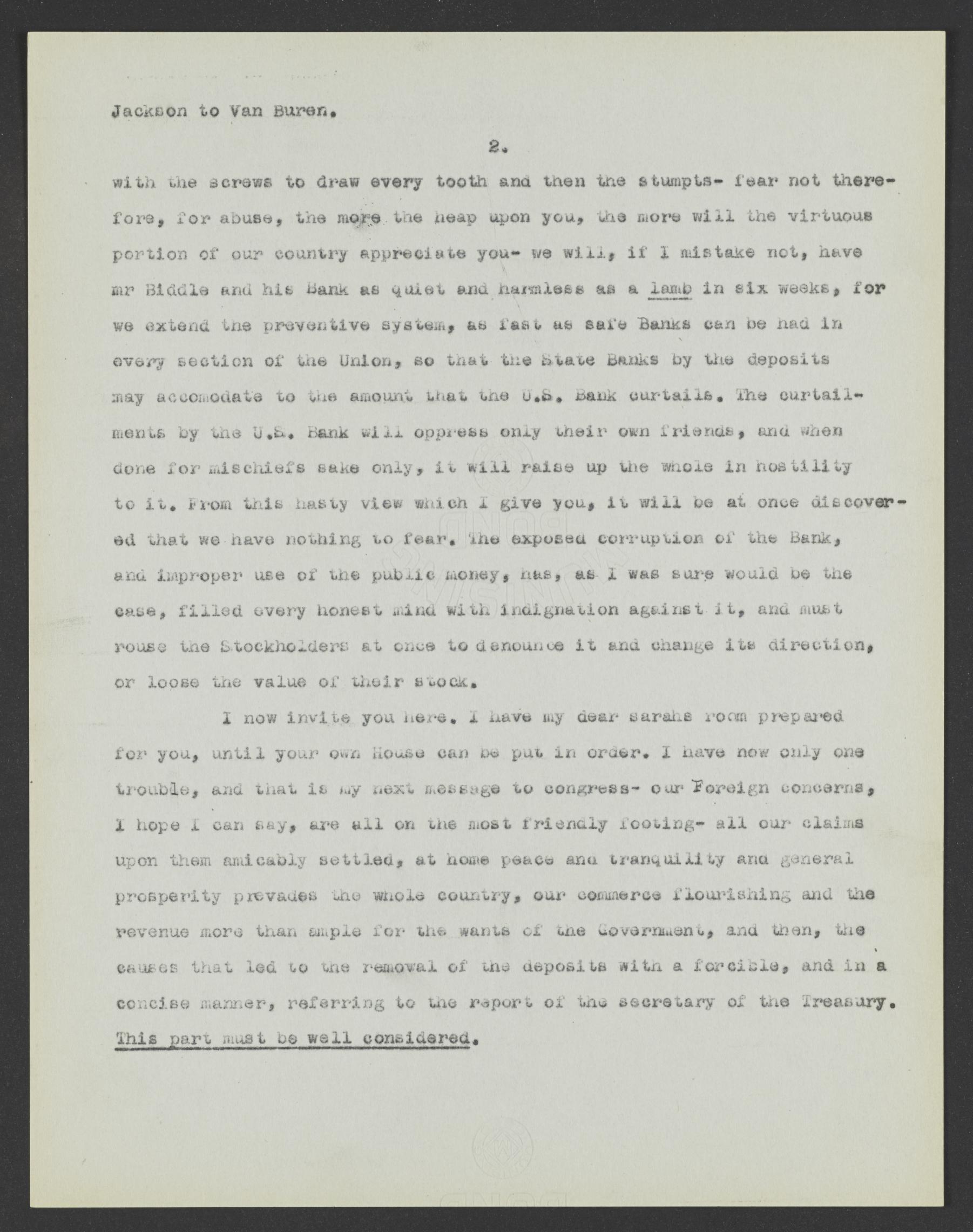 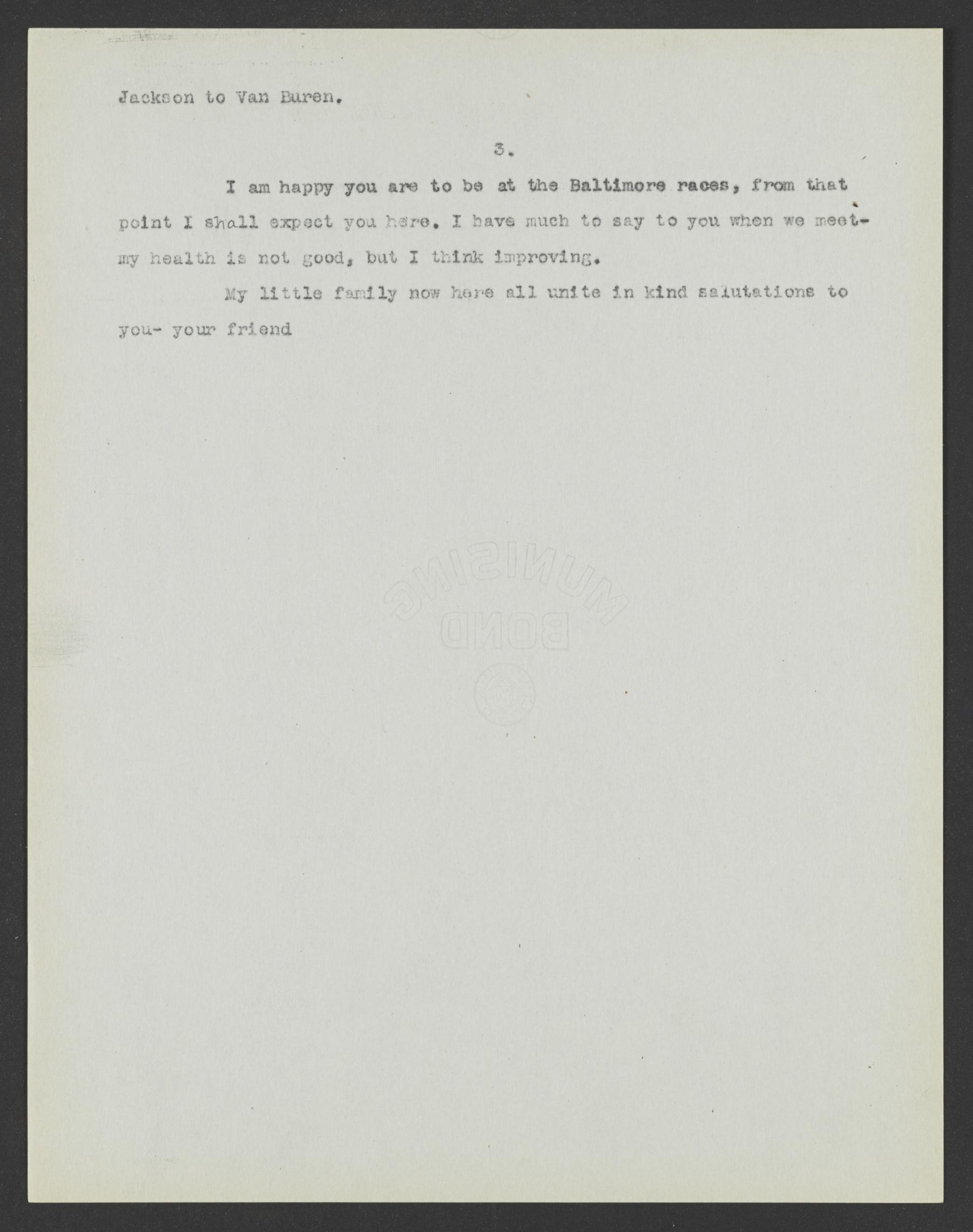