I have this morning, from imperious necessity been compelled to dismiss Mr. Duane from the treasury department. His conduct has been such ^of late^ that would induce a belief that he came into the Dept. as the secrete agent of the Bank, to disclose the cabinet secretes for its benefit, rather than to aid the Executive in the administration of the Government.

I had a hope after the pledge he had given in his letter of july, that if he could not finally agree with me, that he would retire and give room for me to appoint a secretary who would act agreable to my views. Contrary, to this pledge, he took the stand that he would not resign and in a very indecorous letter told <illegible> me I must remove him before he would leave the office. This was returned to him with a calm dignified note informing ^him^ of his pledge; that I could not now hold a correspondence with one of my secretaries on a subject on which I had decided, aluded to the indecorum of his letter and concluded by adding that all I wished now to know from ^him was,^ whether he would aid me in carrying into effect the measures which I had decided on, or not. Mr Duane addressed me another letter equally indecorous but professing the greatest personal regard &c. Before I had time to act upon this, he sent a note to Major Donelson requesting my permission to withdraw it &c &c. In the course of the day, yesterday, he wrote me two letters, and altho couched in more decorous language equally offensive containing palpable untruths & misrepresentations. These of course lay over for action until this morning, yesterday being sunday. This morning I inclosed them back to him with a very dignified note which I thought suitable for the occasion concluding by telling him that “I had no further use for him at the head of the Treasury, appointed Mr Taney, who accepted, resigning the atto. Genls office, and unites with me heart in hand to meet the crisis. Mr Tany is commissioned, sworn into office, and the business of the Treasury is progressing as tho Mr Duane had never been born. In his appointment I surely caught a tarter in disguise, but I have got rid of him. His father is here and if can judge correctly, the papers that were so indecorous were withdrawn and others written for publication hereafter. Believing this, as I had him in the wrong, I have kept <him> so. Therefore he must come forth himself, and if his letters are published by him it must destroy him. The blame that can attach to me is, that I did not dismiss him long before. I have been a good deal indisposed, would no doubt ^have^ been much worse, if it had not been for the exciting palls administered by Doctor Duane. But my friend how humiliating to me to be so much disappointed in a man whose purity of principle & politics I ^had^ so much confided, one who was always opposed to the Bank, who I had every confidence in when I appointed him that he would go hand & hand with me in carrying ^in^to effect a measure that I had called for the written opinion of my cabinet in last month. Professions will not do to be relied on now a days where the power of the Bank comes into question. Hereafter I will have a pledge; Who shall I take to fill the atto Genls place? He ought to be right upon the Indian & Bank questions, & possessing legal talents & weight of character. Mr Woodbury says he ought to come from the south. Who can we choose in the south to fill the character? Judge Parker? Some say Mr. Dallas. Write me freely and confidentially on this subject.

P.S. I send you no Globe as I expect the Major has. When read give me your views of it. I now begin my message. It must be carefully adapted to the crisis. I will have a rough draft made for your examination when you come on. 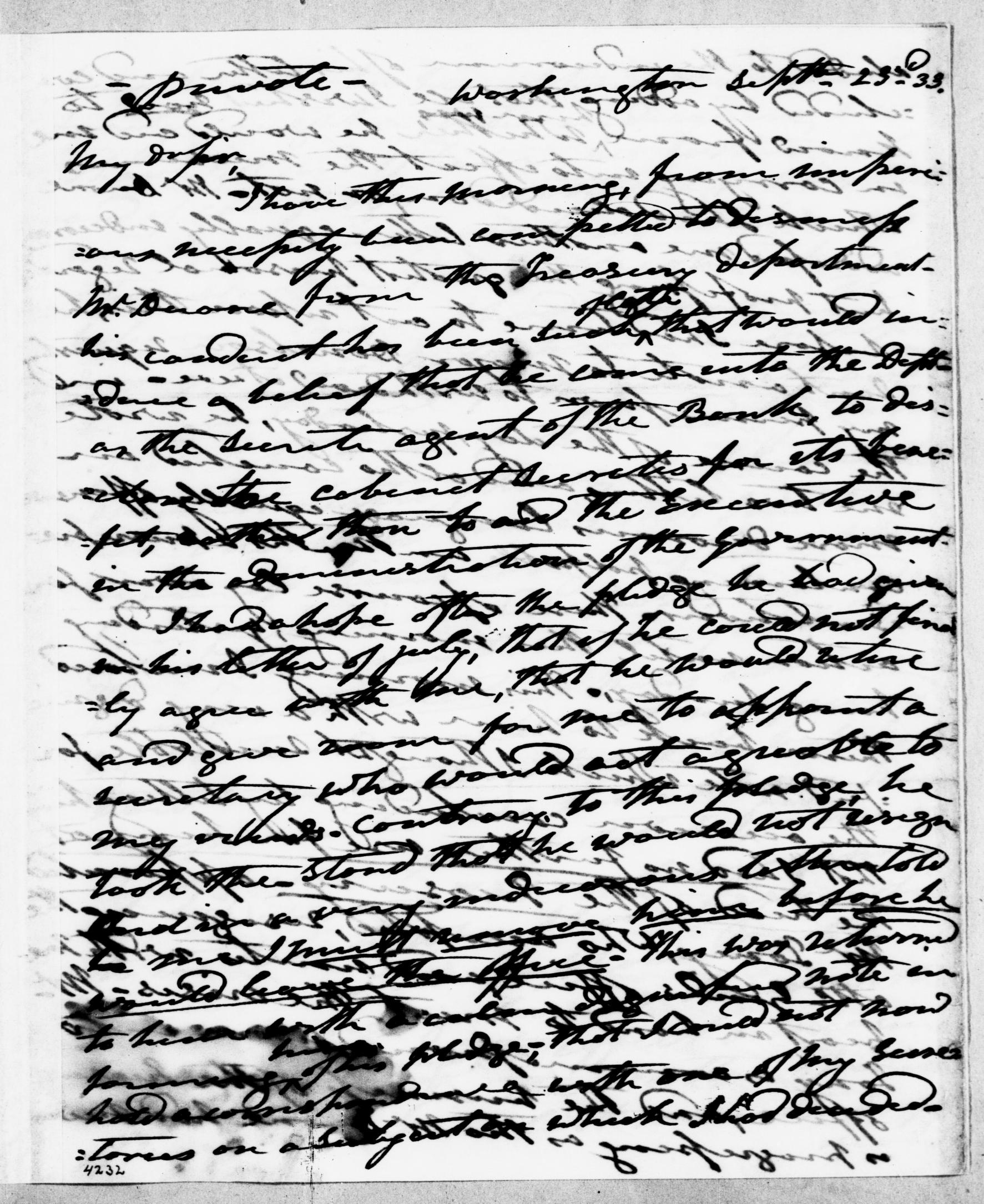 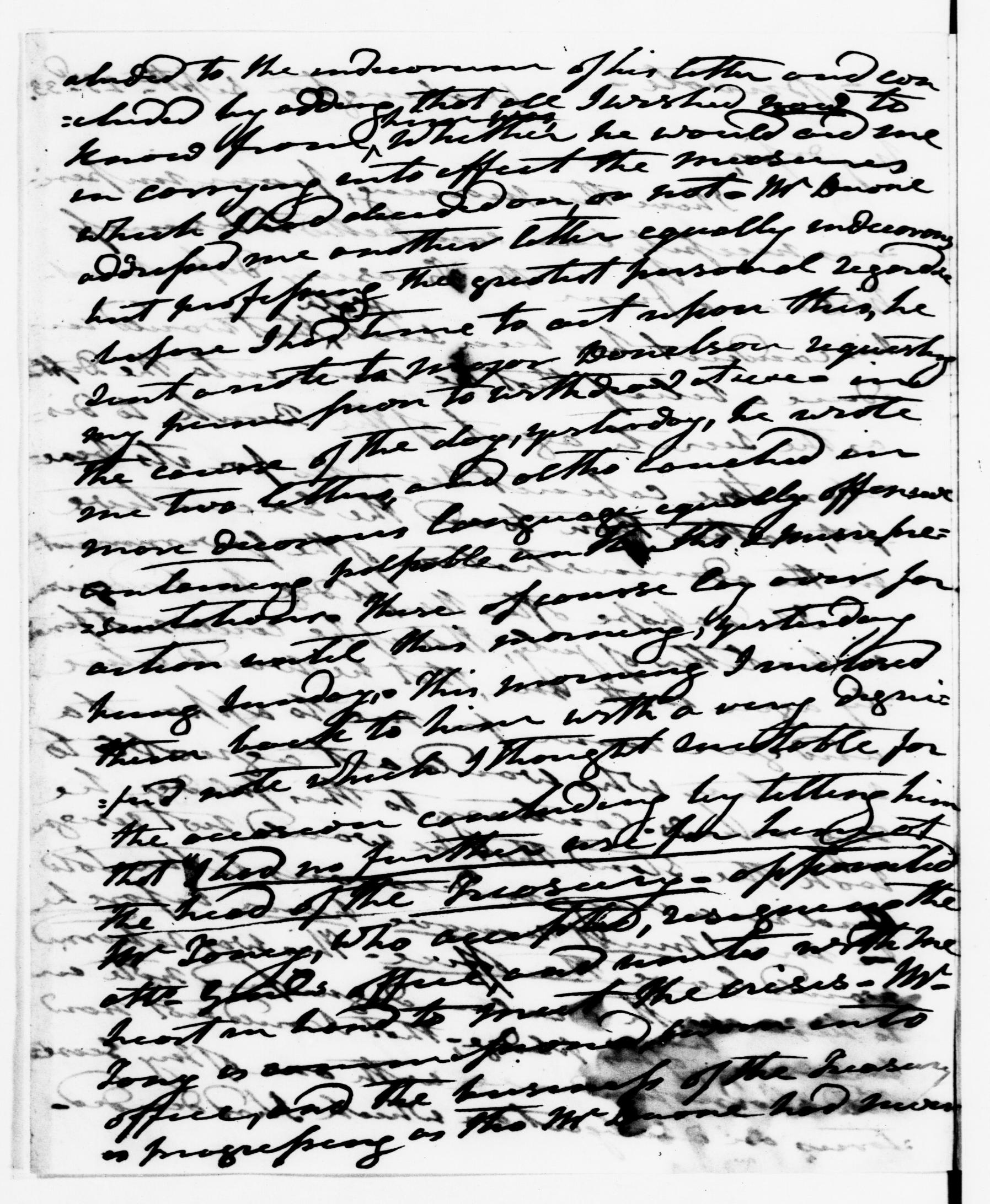 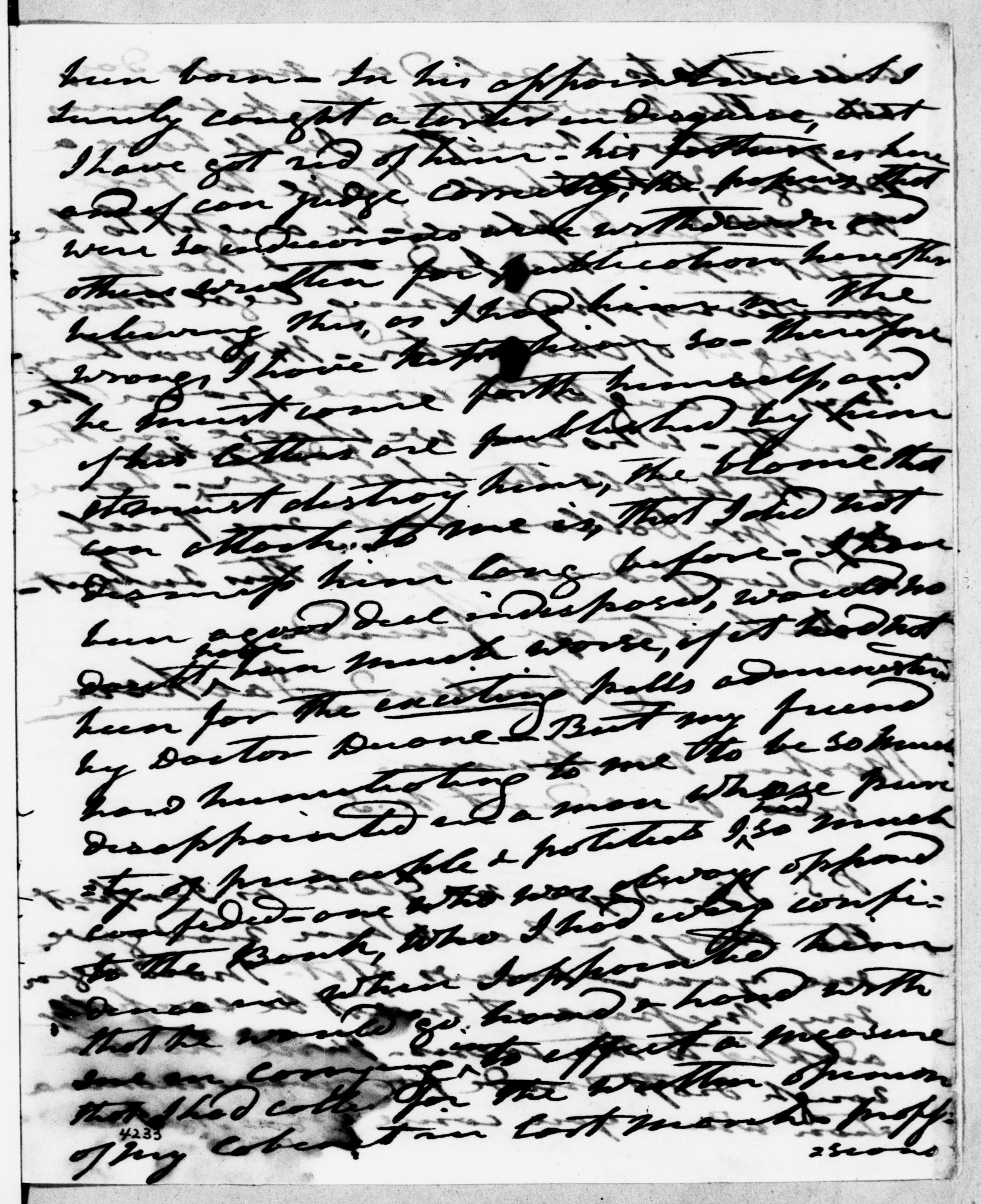 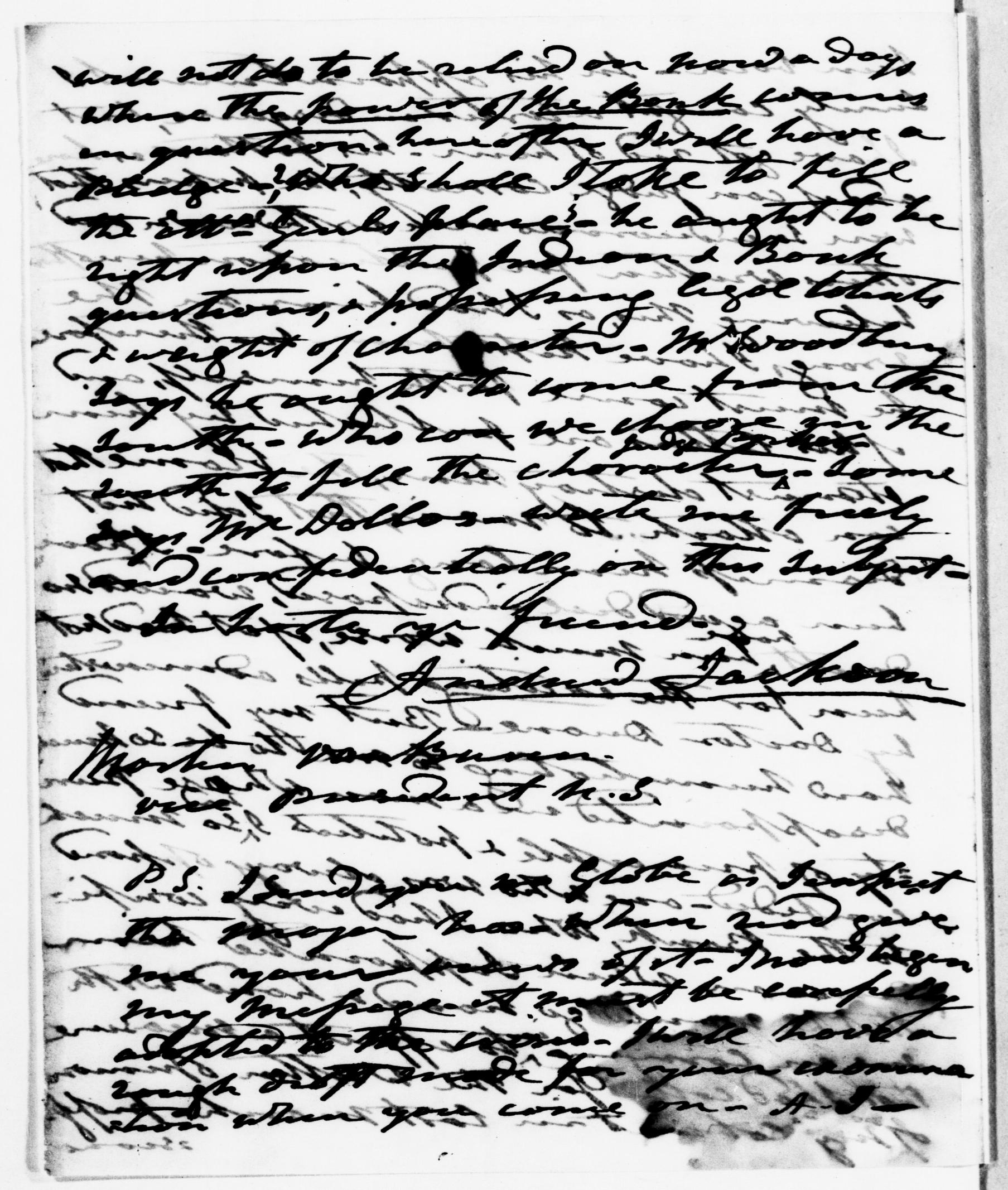 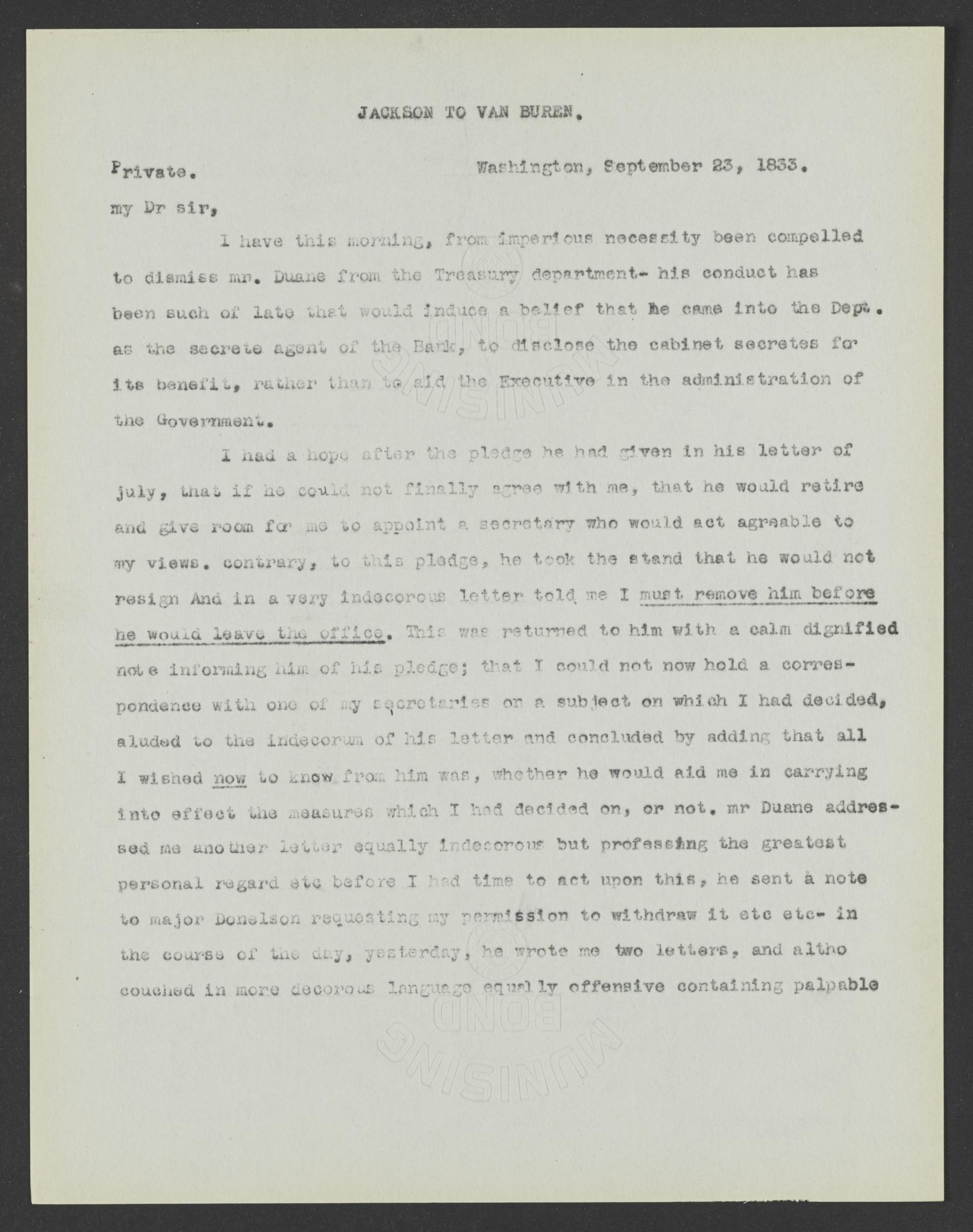 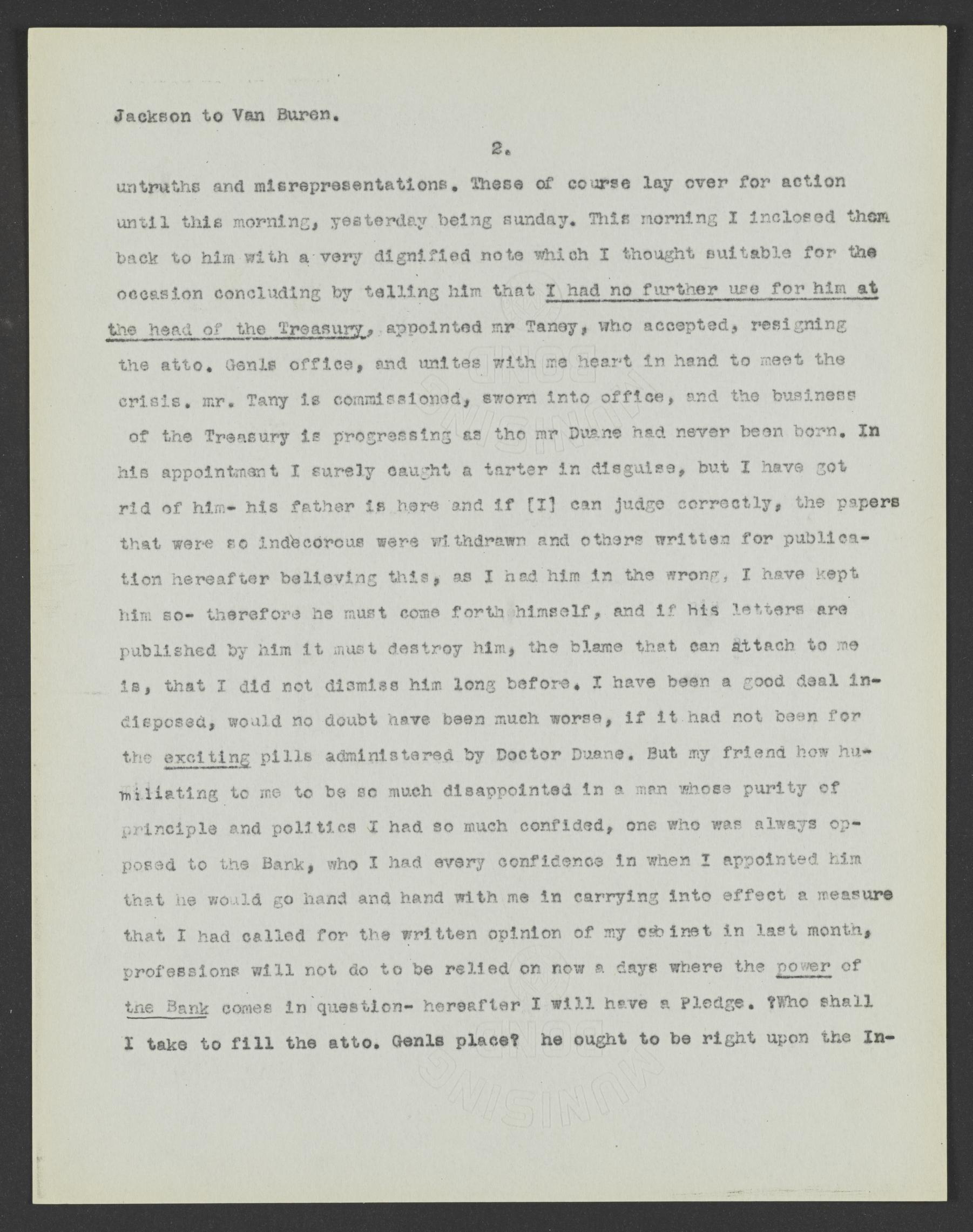 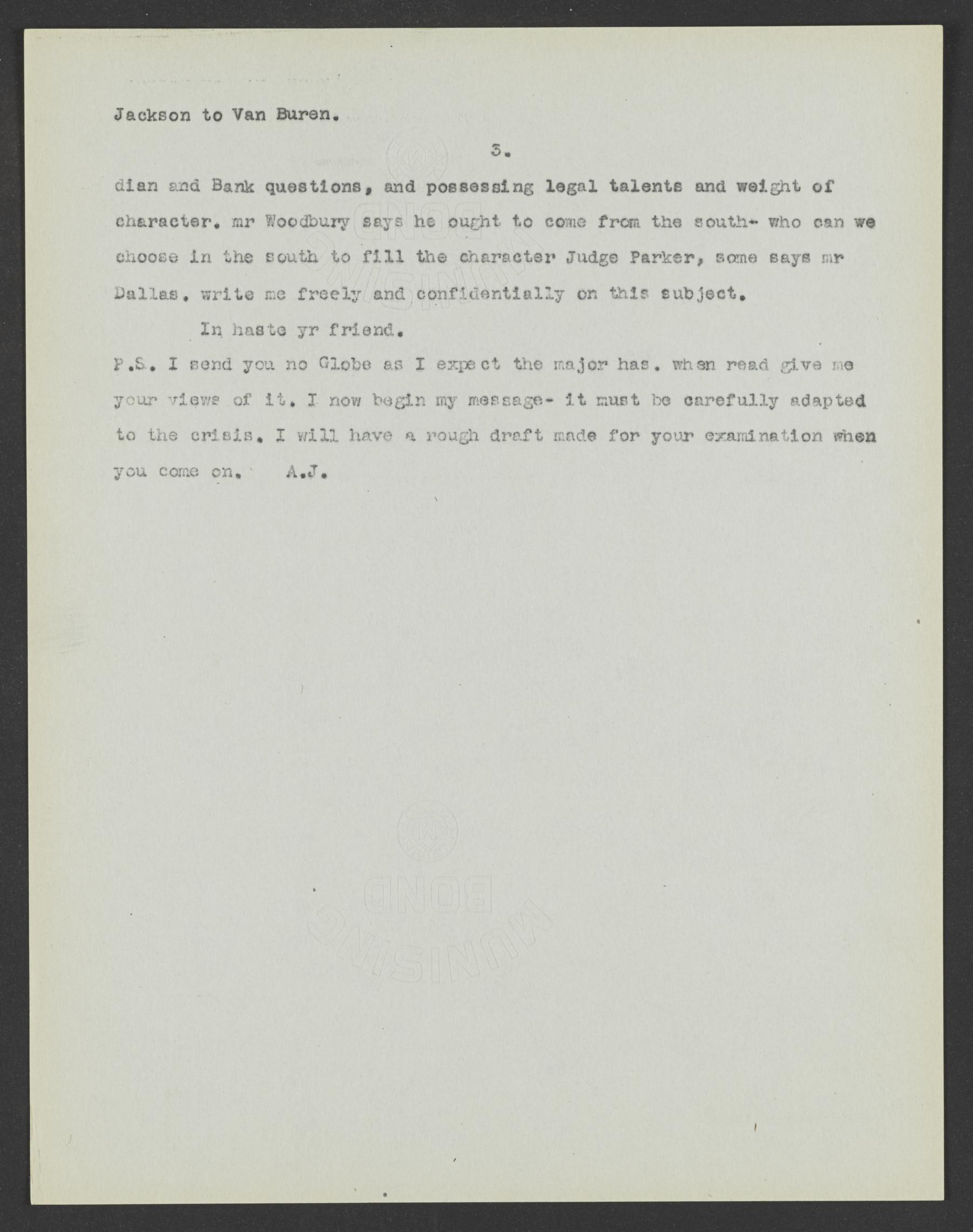