The Globe of tomorrow will inform you that the deposits are to be removed, or all collected after the 1rst of October next, to be deposited in the state Banks. This is all that will be communicated until a full expose is made & our arrangements with the state Banks fully matured.

I made my determination known to my Cabinet yesterday, in writing, as the measure of the Executive, and on my own responsibility &c&c. It is a strong paper; and Mr. Duane has said so to Major Donelson to day, and has asked until tomorrow night to decide whether he will execute it. Mr. Duane says the expose has put me on strong grounds, & has entirely presented the case in a new form to his mind. I have thought it right to indulge him & I expect now he will act with energy, or retire friendly, which to me is desirable.

Mr. Taney is a sterling man. You would have been delighted with him had you been present. He has, I am told, drawn high encomiums from Mr McLane, who in the evening after my final decision, was in good spirits. When I see, I will give you, a full account of my perplexities, from various delays & other causes.

Every way has been adopted to alarm & deter this decision. Mr. Kendal has been assailed by letters to me & to the heads of Departments on charges of conspiracy against the Cabinet by the Editor of the pennsylvanian, whilst he has been writing Kendall the most friendly letters to entrap him. In this he has failed. Kendall I believe as pure a talented man as any. Two such men as Taney and him are highly valuable to any cause. Neither can be frightened, or bought

I told you in one of my letters tha[t] the Bank had bought up Bennet. This was my opinion before he unrobed himself by his letters.

I am quite unwell to day. Will write you saturday or Sunday when I can State positively every thing. If Mr Duane retires, I will have the able & hearty aid of Mr Taney who is not afraid of the senate, or to meet with me, the question boldly

P.S. If your presence should be wanted here before the 20th of october next, I [w]ill advise you. I would like to [. . .] you here whenever it would suit your own convenience, but will expect you by ocbr. 20th. 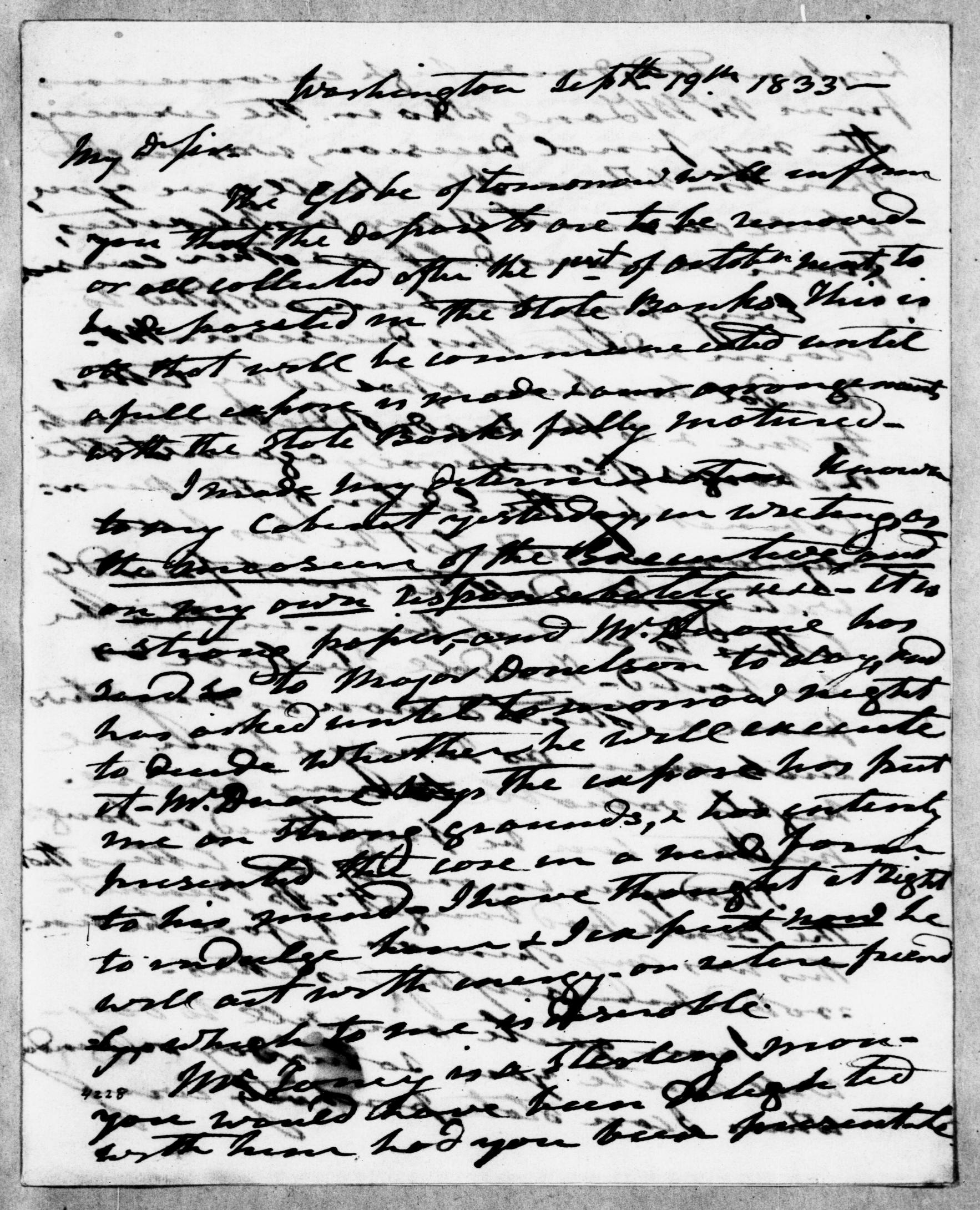 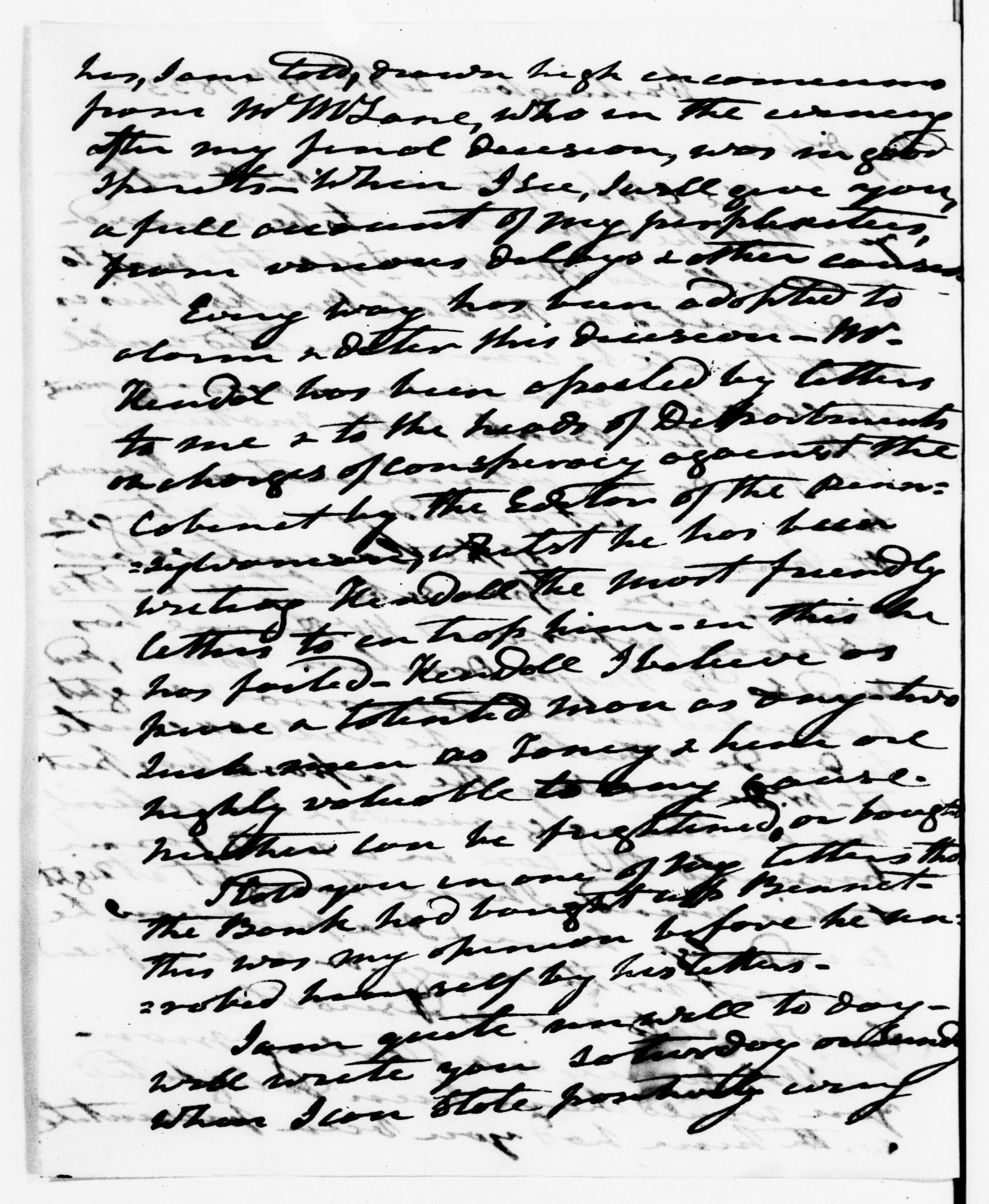 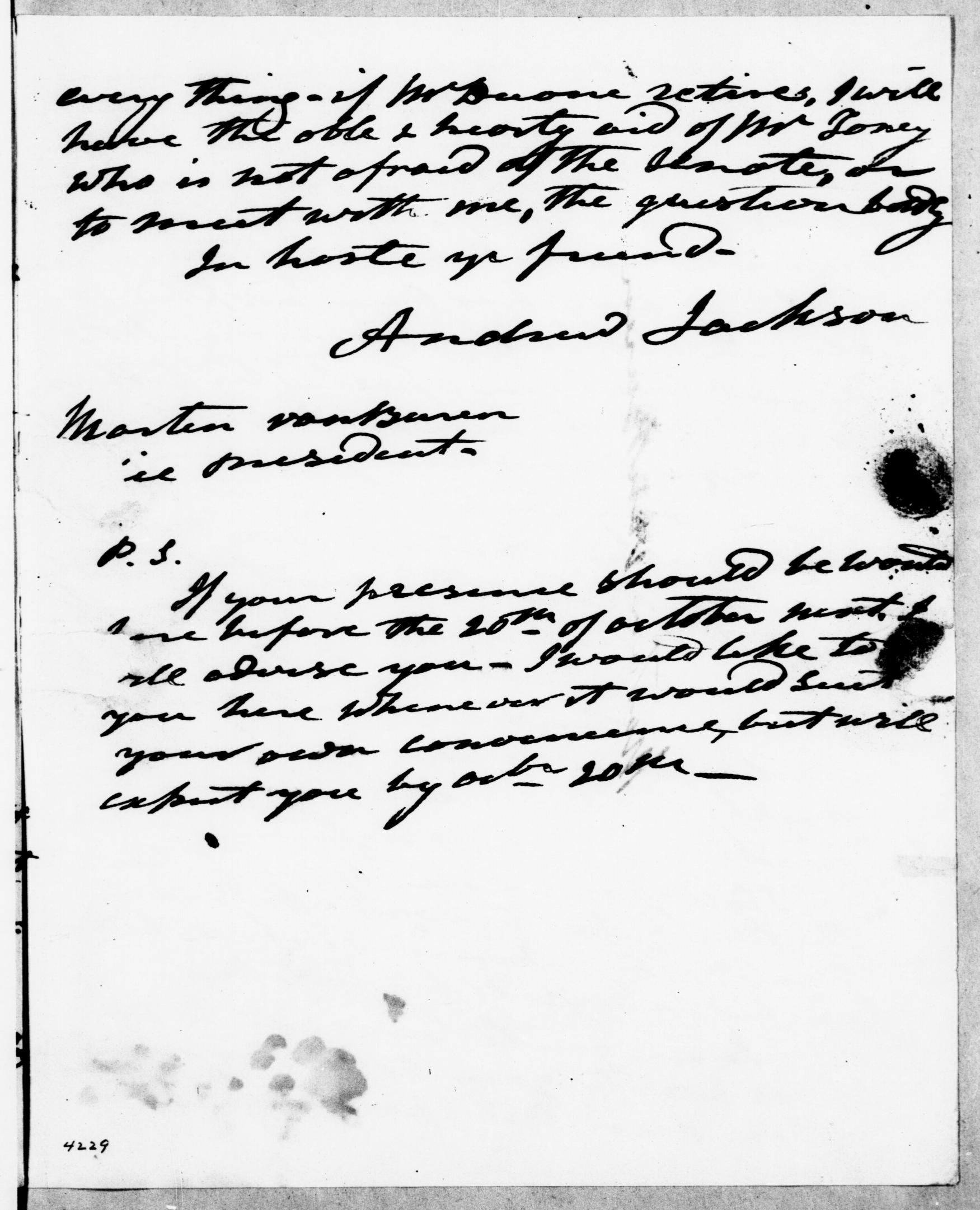 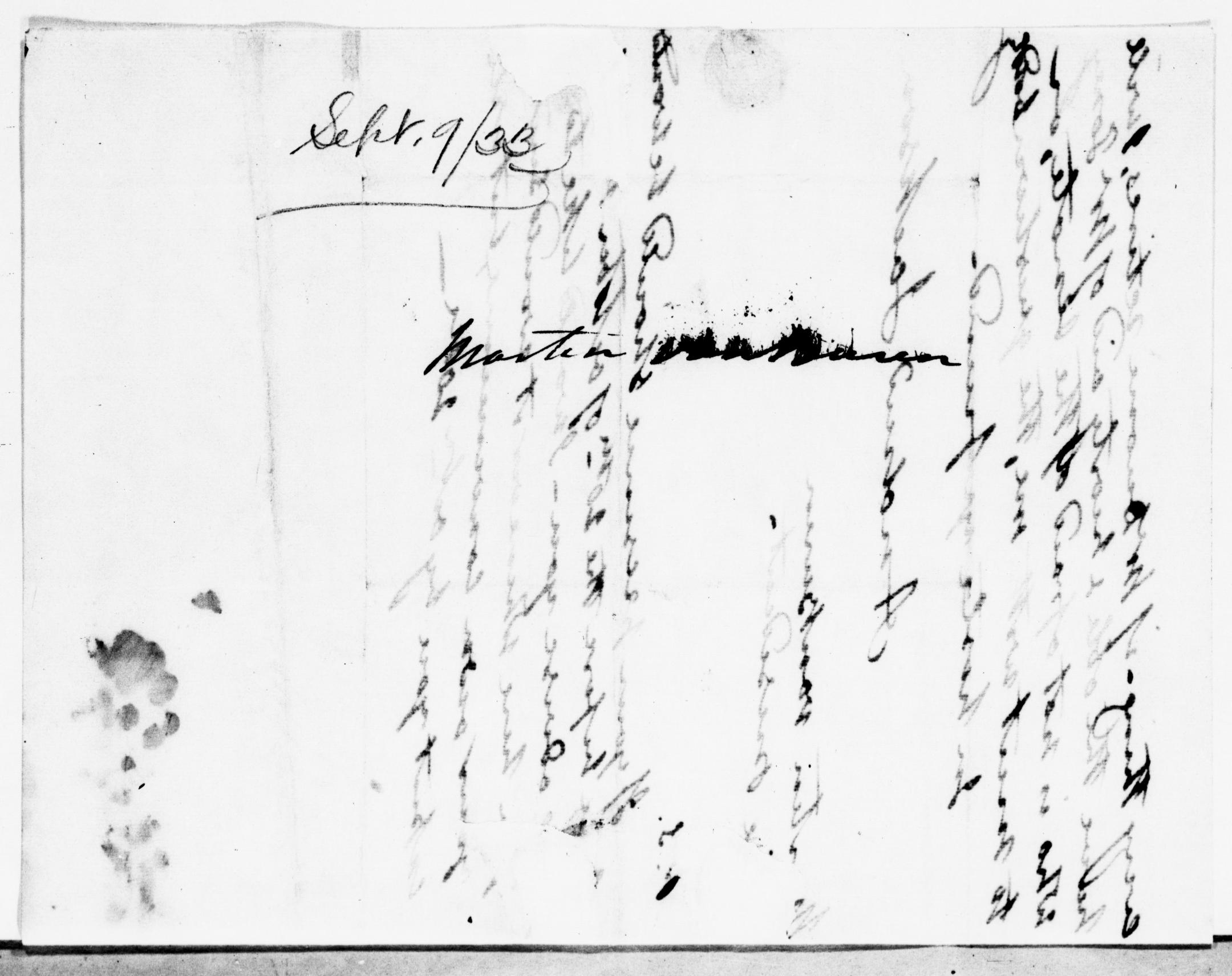 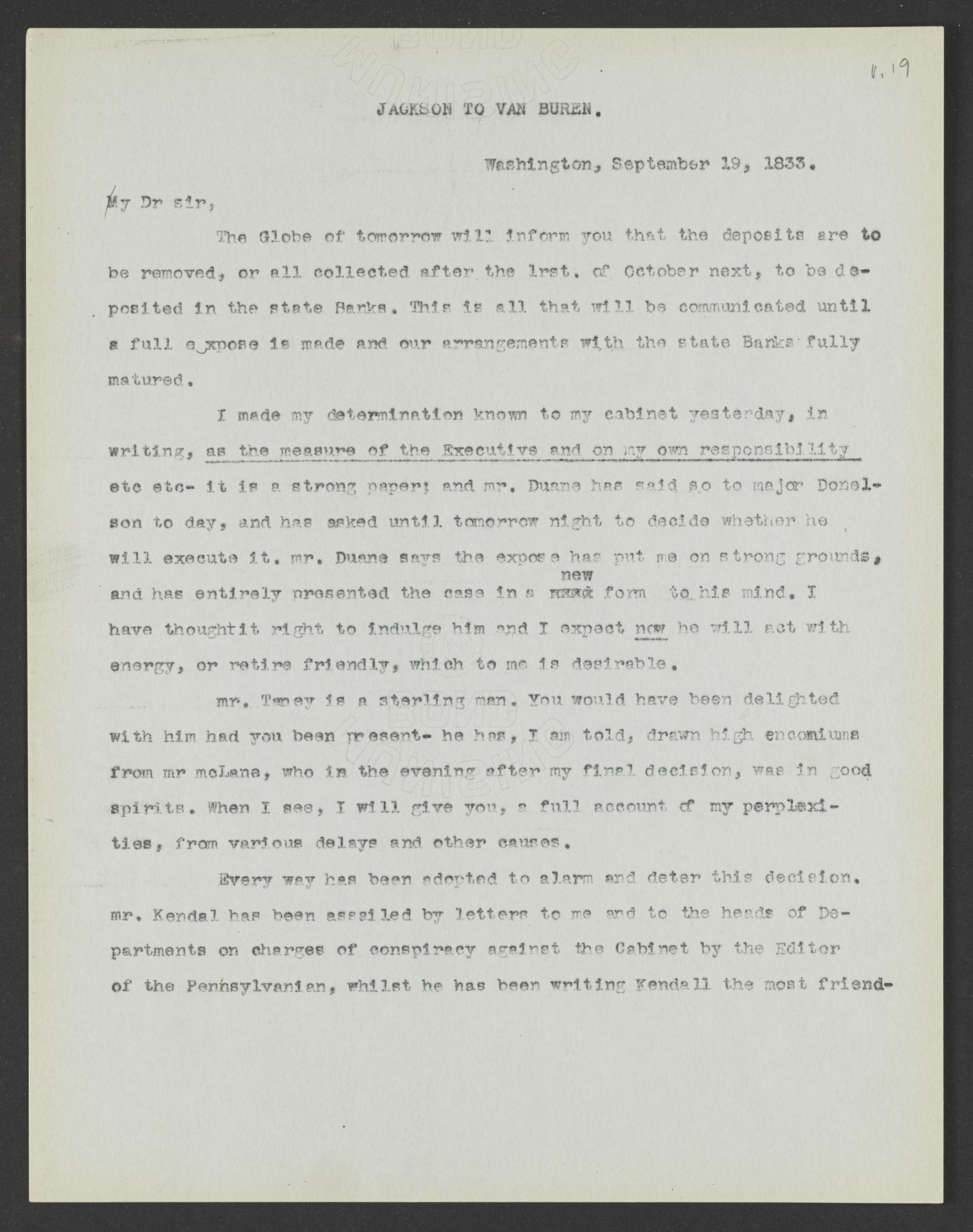 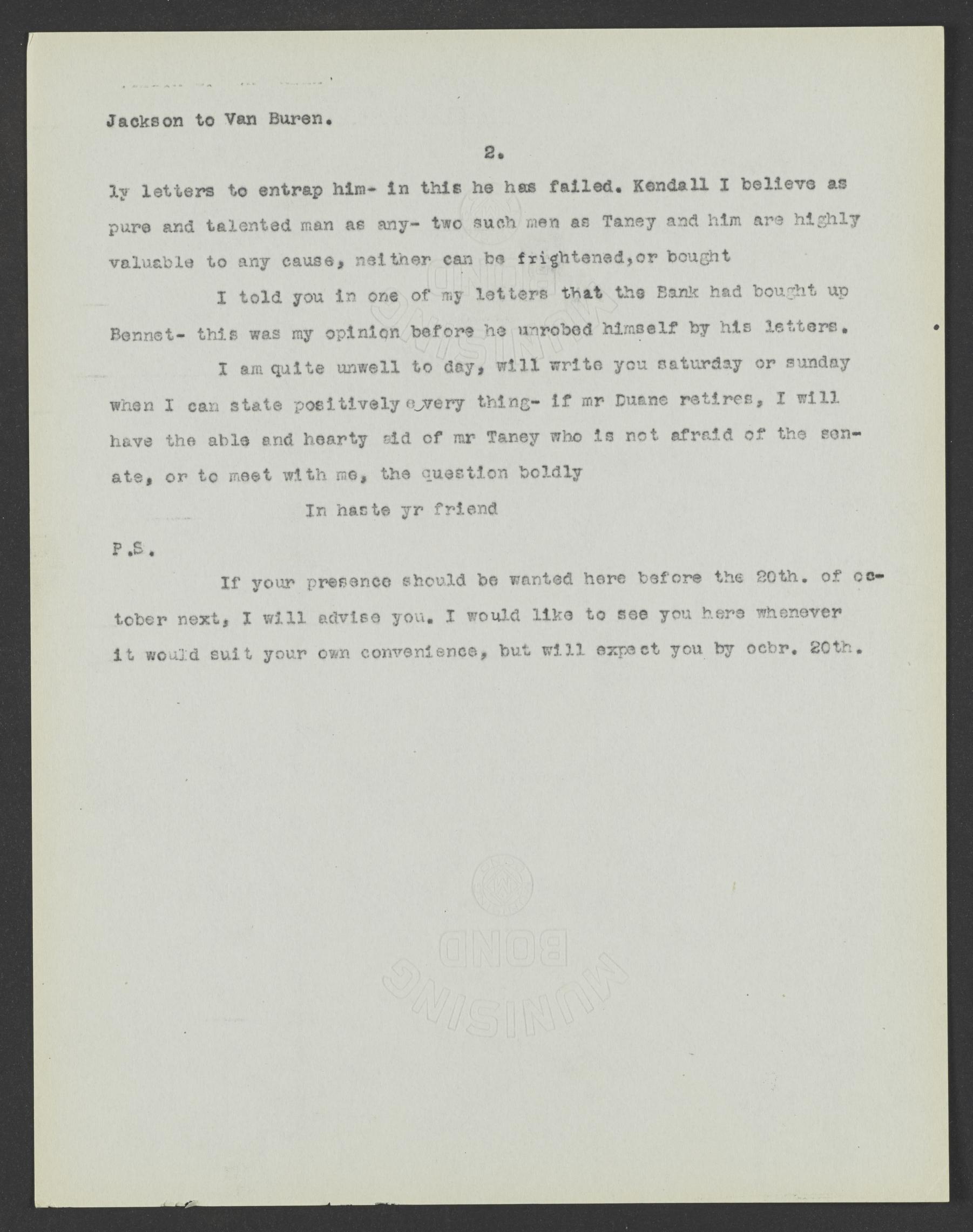