Your letter of the 11th instant is just received, its contents duly observed & noted. I have only time to say to you that I am well pleased with the spirit in which it is written. One point we have settled that the deposits are to be removed, and on Tuesday next ^will be^, as to the day to be named. This will be settled at as early a day as it is assertained we can make the necessary arrangements with the state Banks. So soon as this ^point^ is settled [. . .] I will write you again.I have been perplexed much. Delay after delay, which you know is perplexing to me, and particularly when it appears to me that promptness is a duty. The members of Congress elect, are now known to the Bank agents & if they can be corrupted the ample means in Biddles power will be used, & can only be checked by placing the whole matter before the people.

Taney has been firm, others wavering and Major Barry not returned. Whether Mr Duane will remain I have not positively assertained, but am rather inclined to believe he will withdraw. To think that he should take the stand he has, from his uniform republican principles my full confidence ^was^ reposed in him that from his known hostility to the Bank, that he would unite with, & go hand in hand with me to carry into effect the system began & the only one that can be adopted to prevent its being recharted by corrupting the people, destroying the freedom of the presses & freedom & purity of elections has pained me more than any occurrence in my life. I have told him to take the atto Genls. opinion & pursue it, he being our legal adviser, his opinion of the law, where there were doubts, ought to govern the heads of the Departments as it did the president. He agreed to see & converse with Mr Taney. What may be the result I do not know.

I have had a good deal of perplexity and am determined to have the matter settled & the result made known to the public.

I write in haste, direct it to Mr. Camberling N. york, with a request to forward it to you. In my next I will say to you the time I wish to see you here. My whole household salutes you.

P.S. I have been labouring under bad health for several days. I am better to day. Let me know Where to address you. Excuse the errors that from [ha]ste you will find in this scroll. 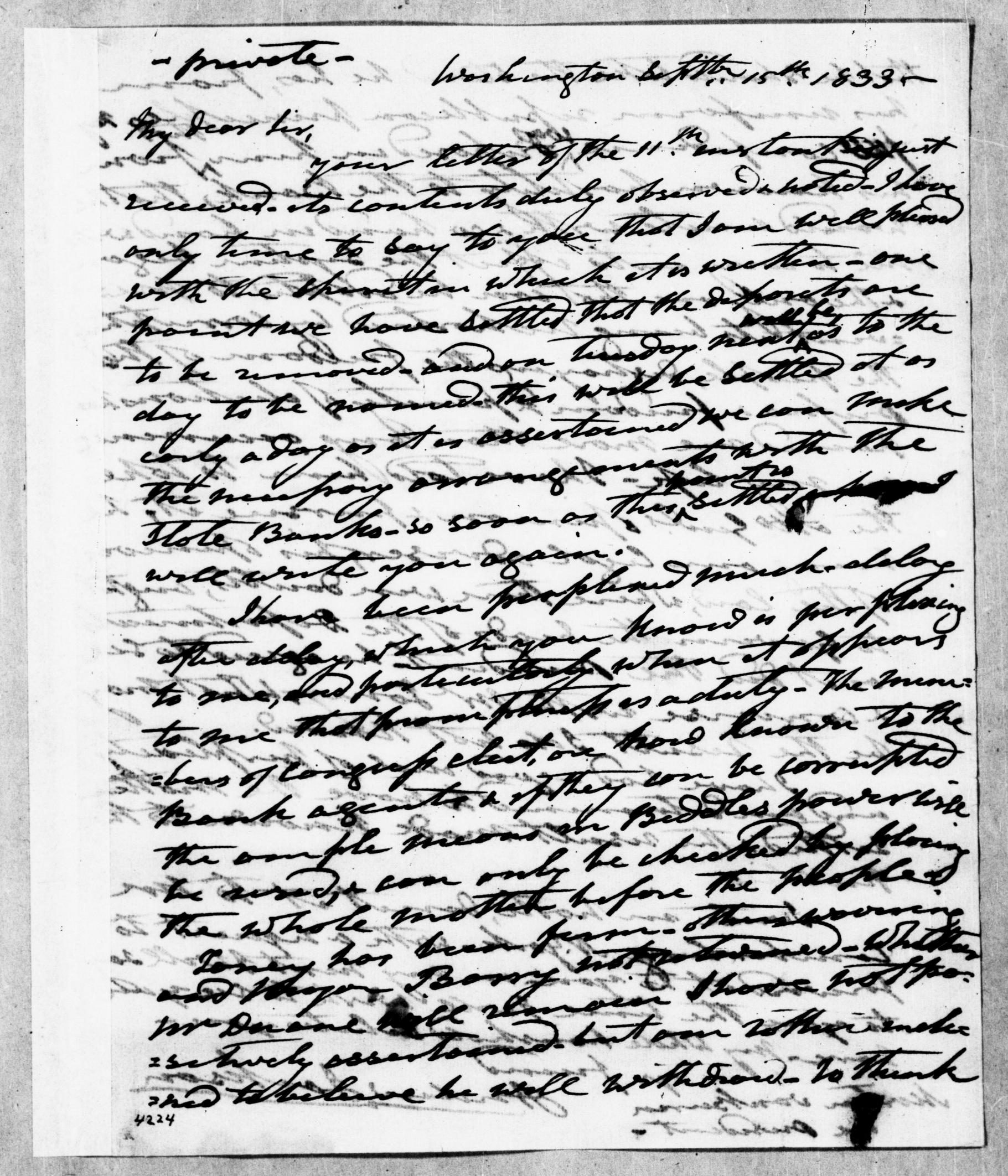 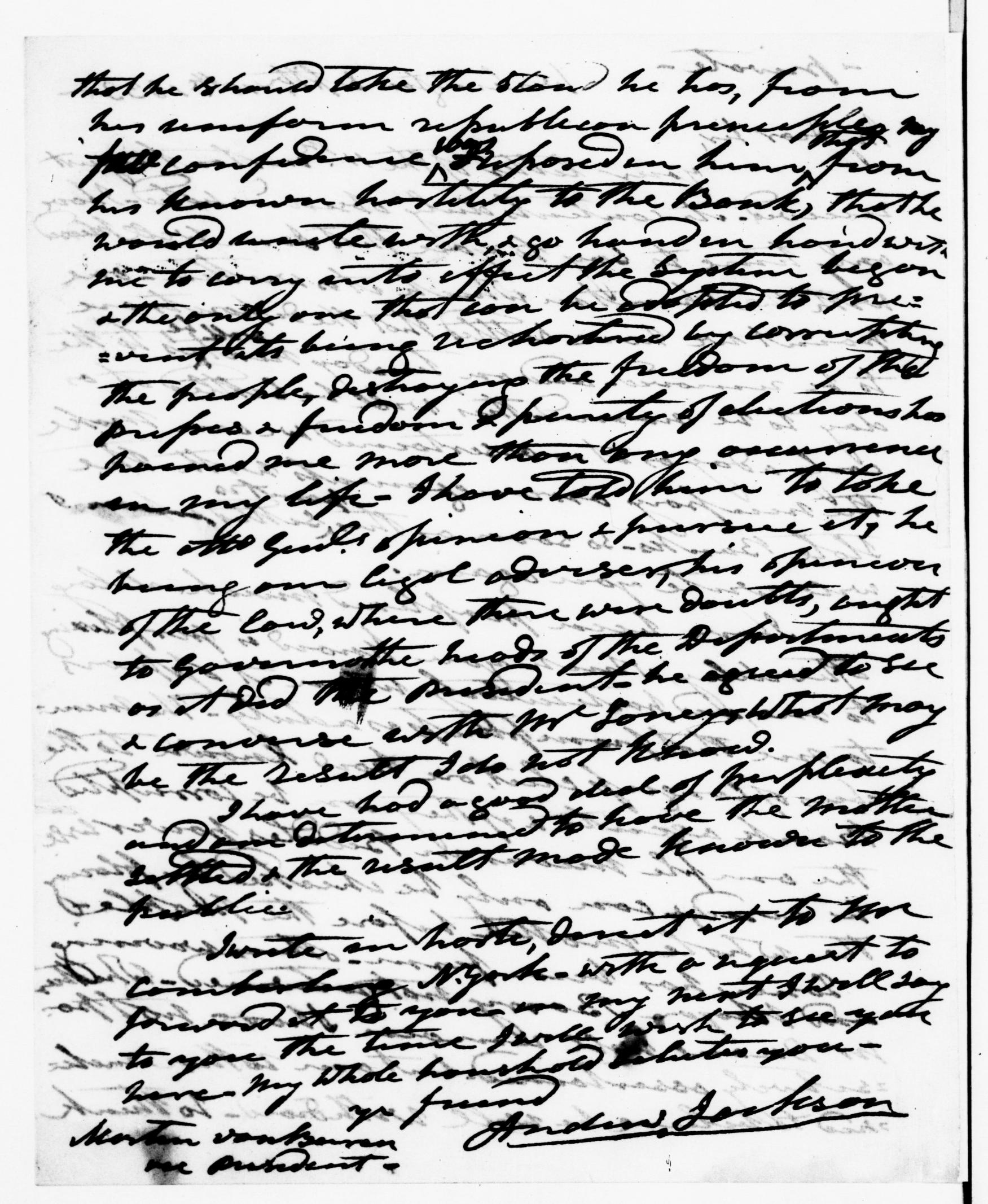 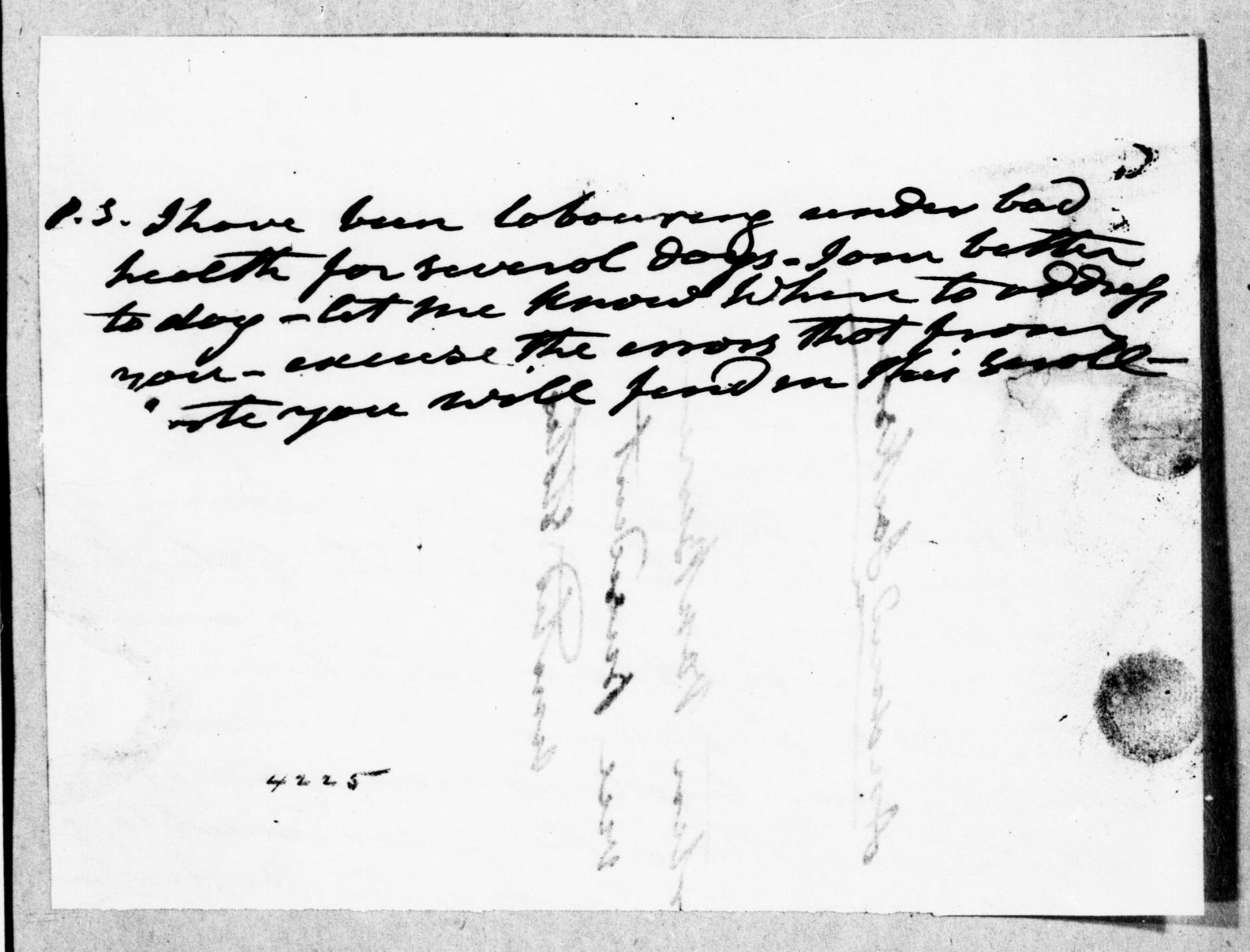 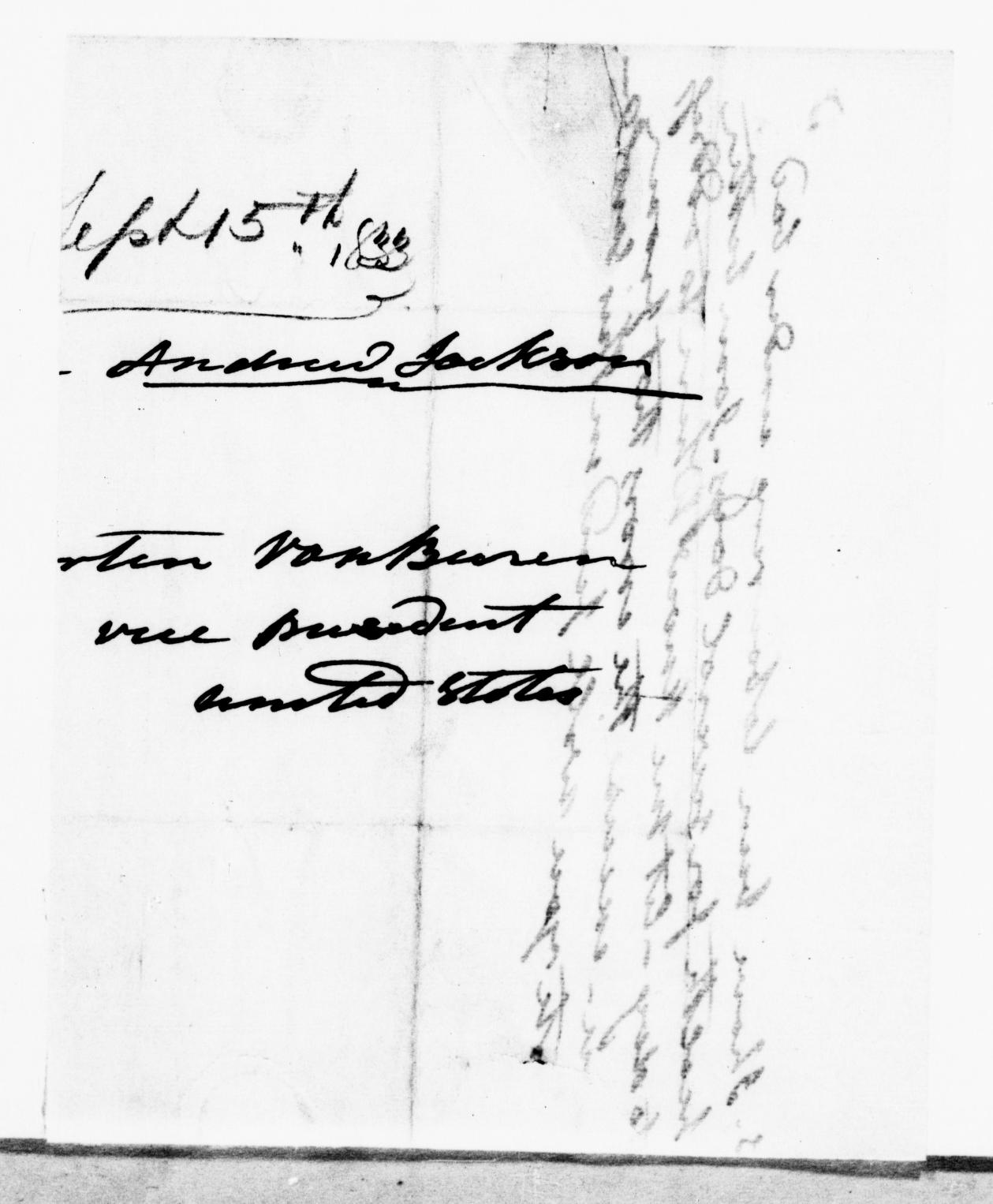 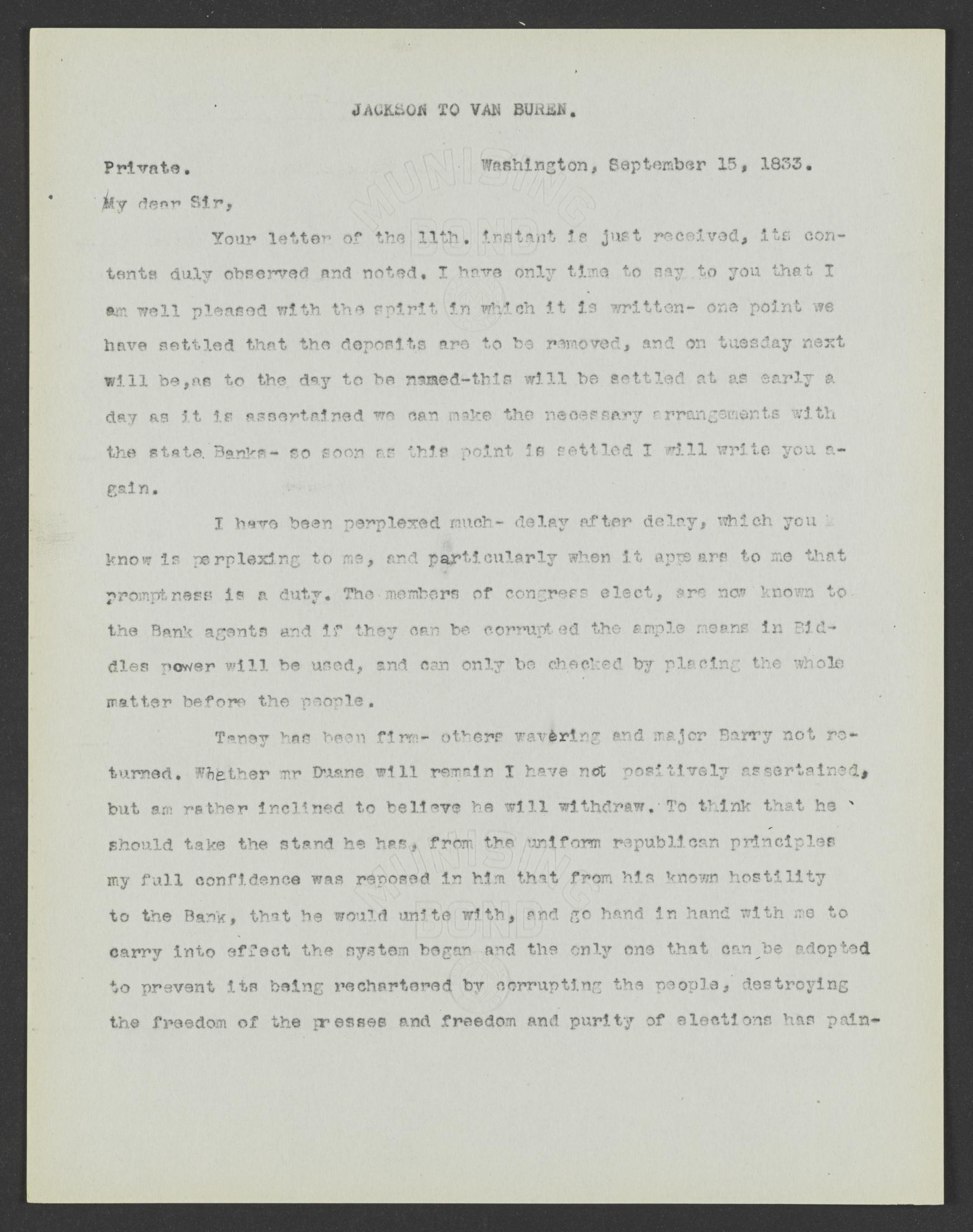 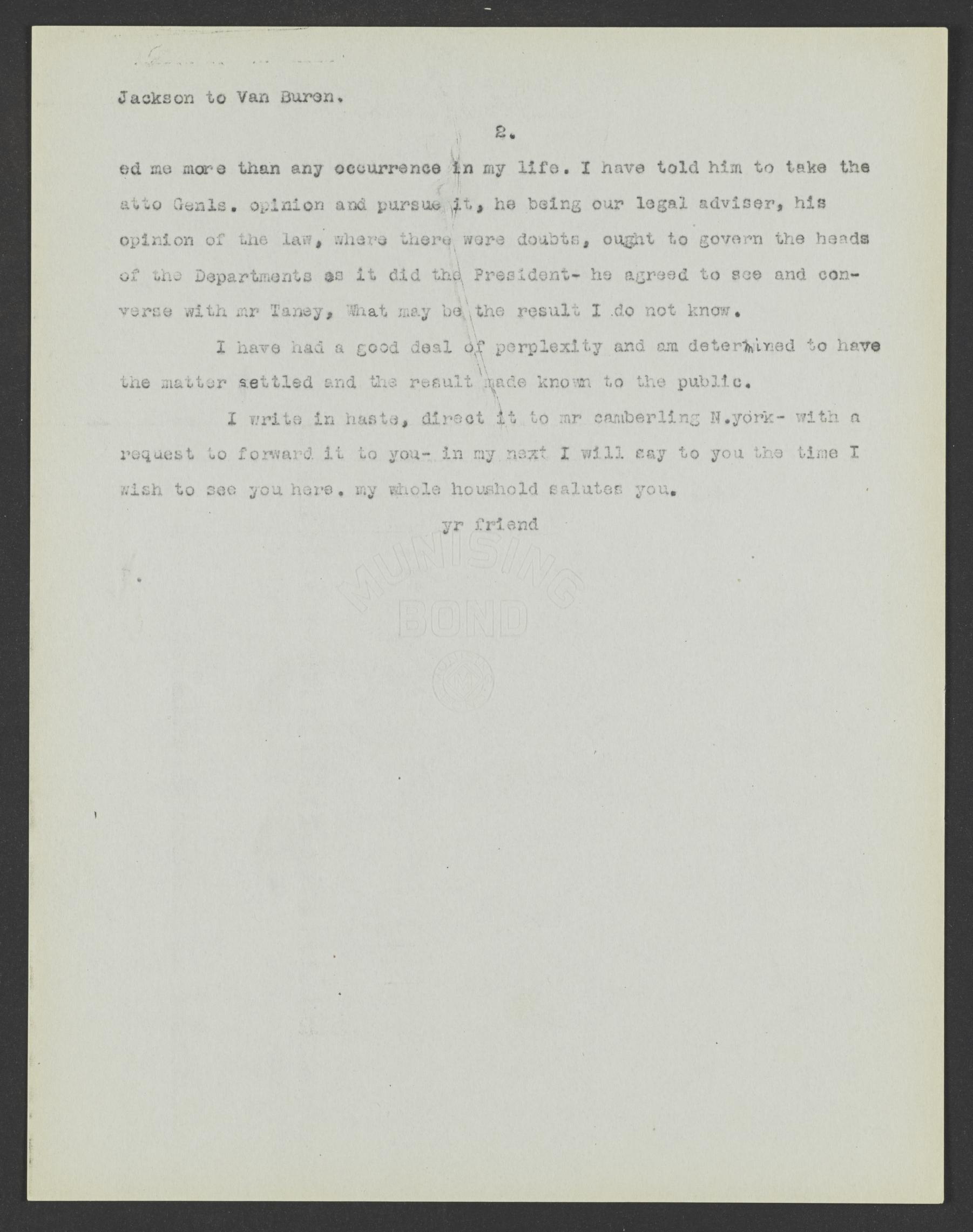