Your letter of the 8th Inst. was handed to me at the moment of starting from Albany this morng, and read here. From its contents, I infer, that in the hasty perusal which you had only had time to give Mr Wrights and my letters you have misapprehendd their import. We do not, as you seem to suppose, concur in the suggestion of Mr McLane, but directly the reverse. That suggestion, was, to refer the subject to Congress, without doing any thing further, & only to make an order for the removal, in the event of congress declining to act in the matter. This I objected to as useless, & discreditable, inasmuch as Congress coud of right do nothing in the matter, until after the Secty of the Treasury had ordered the removal, & that, under those circumstances, it would look like manifesting a desire to shove on Congress, a responsibility, which belongs to the Executive, a course which we could never advise you to take. In respect to the other points, the matters stand thus. In your first letter, written on the eve of your departure for the Rip-Raps, you stated the question in your mind to be, whether the removal should be completed before the meeting of Congress; or whether the order <illegible> be made for their removal, on the ^though made now,^ should ^only^ take effect on the first of January only, describing that, according to the best of my recollection, as the commencement of the fiscal year. Upon this question, you will find from Mr. Wrights letter, that the most of our friends at Albany, with whom he consulted, because he knew he could rely upon their discretion & secrecy, were in favor of finishing the whole matter before the meeting of Congress. He & myself ^however^ for the reasons we have assigned preferred, upon the whole, to make every thing complete before the meeting of Congress, except only, that the order for the removal should <only> take effect on the first of January, believing that to be the commencement of the fiscal year, a circumstance, to which I attached considerable importance. We however merely expressed this, as a preference, not by any means strenuously entertained, & declared, that if upon a nearer & better view of the <illegible> whole subject you should conclude, that the ^adoption of the^ other course was necessary, we should cheerfully acquiesce, & firmly sustain the act. These are still my views, with the exception, that my preference for the first of January, as the ^period for the^ commencement of <making> the deposits in the State Banks is very much weakened, by the alarming facts contained in the Directors Report, and the further fact, that the first of October & not the first of Jany is the commencement of the fiscal year. Upon the whole, do as you think best for the honor & interest of the Country, & count with the utmost confidence, on being sustained, with immoveable constancy, by myself, Mr. Wright, & all our true friends in this State.

Washington Irving & myself are so far on a tour which will take us four or five weeks. After that, I intend <illegible> to make you a visit, & shall do so about the middle of October. If any thing should render it indispensable, or highly desirable, that I should come down sooner, I shall not hesitate to do so. Dont forget the suggestion in my letter, about the care to be taken in regard to the Selection of the Banks in the City of Nyork. If 4 can be selected, & I see no earthly objection to it, as it is the great point of collection, the act will draw after it an immense weight of mercantile influence in that City. The suggestion also in my last letter, to be fortified by the Attorney Genls. opinion upon the point refered to, is I think deserving of consideration.

Remember me kindly to all your Household & believe me to be 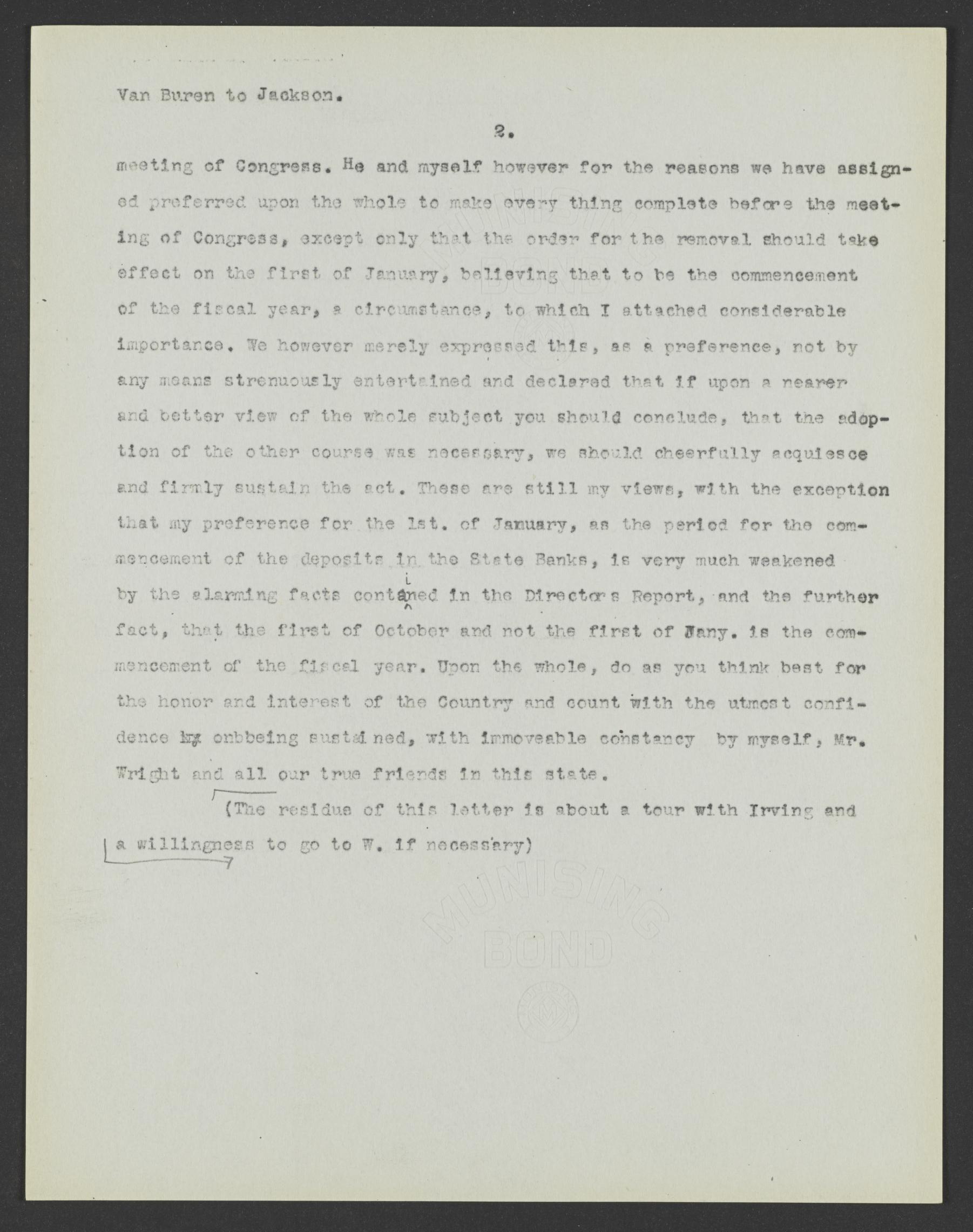