Your letter of the 8th covering one from, Mr Forsythe to you, has been recd. I can have no objections to <recind> all promises made or conversations held with Mr Forsyth on the subject of the mission to Rusia. Mr Buchannan intends to return this fall, and on his return ^arrival^, it will be time enough to select his successor, when he will think of Mr Forsyth.

I have just recd. a letter from Mr. Kendal at N.york dated the 11th. He has been as successful in his mission as he could expect, & has no doubt of a safe & satisfactory arrangement with the state ^Banks^. He informs me that in a conversation with Doctor southerland, the Doctor said that Mr. M.Lane had procured the appointment of Mr. Duane that he might control the two Departments, and that the Deposits would not be removed. I cannot believe that Mr. M.Lane recommended Mr Duane knowing his sentiments upon this subject, but it is truly mortifying to me, that the public has taken up this idea, and that Mr. Duanes course has been such, as to confirm it in public opinion. But this belief in the public mind will induce me to act with more promptness and firmness in this matter, to prevent the injury it is doing Mr MLane and particularly your popularity, it being well understood the confidence and friendship that exists between you & him. It is already hinted that you are opposed to the removal of the Deposits, and of course privately a friend to the Bank. This must be removed or it will do us both much harm. It will be unpleasant for me to differ with these two gentlemen for whom I have such high regard, but when duty points the way, my private friendships must yield to public good, and if I should loose twenty more friends as highly prised as they, my feelings being now as it was on the Maysville Road bill, and the Bank veto, “that it is a duty I owe to my country, my conscience & my god” to put down this mamoth of corruption & to seperate it from being the agent of the government as early as possible for the safety of the ^its^ fiscal concerns.

I inclosed you the other day a review of the views heretofore taken on the propriety of removing the deposits. I wish you to criticise it, & return it with your corrections & criticisms I think it will be well to lay ^such a paper^ before the heads of Departments such a paper & preserve it on file for future use, if it should be necessary

Should Mr Duane refuse to yield to the wishes of the Executive, & retire, I pledge myself that no one superintends that Department ^hereafter^ but one whose whole opinions I know corrispond with my own. I will give the agency to Mr Taney who is right, & with me in all points.

Let me hear from you, & have your criticism upon all subjects referred to you by the 24th current. Mr. Kendal is to be at washington 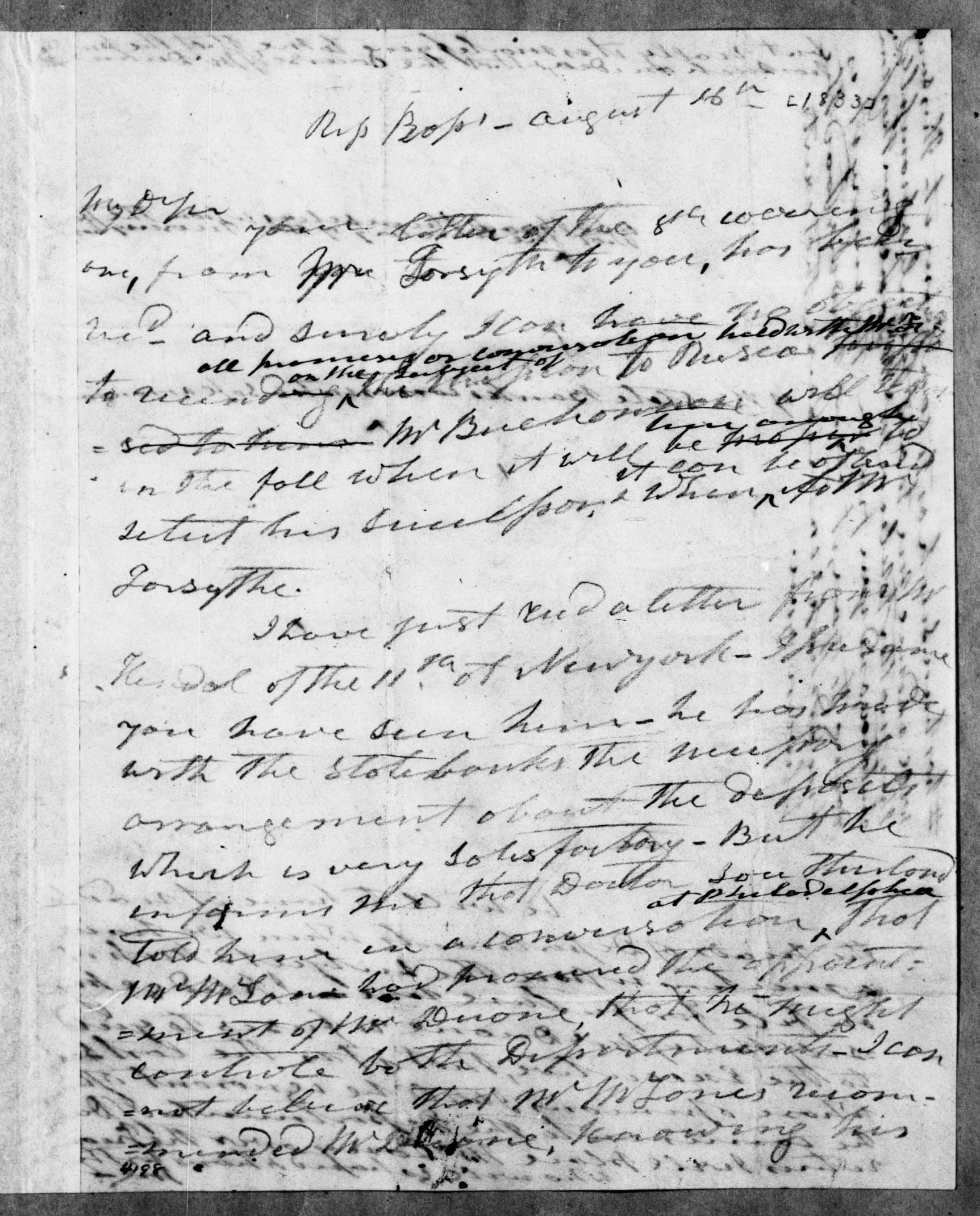 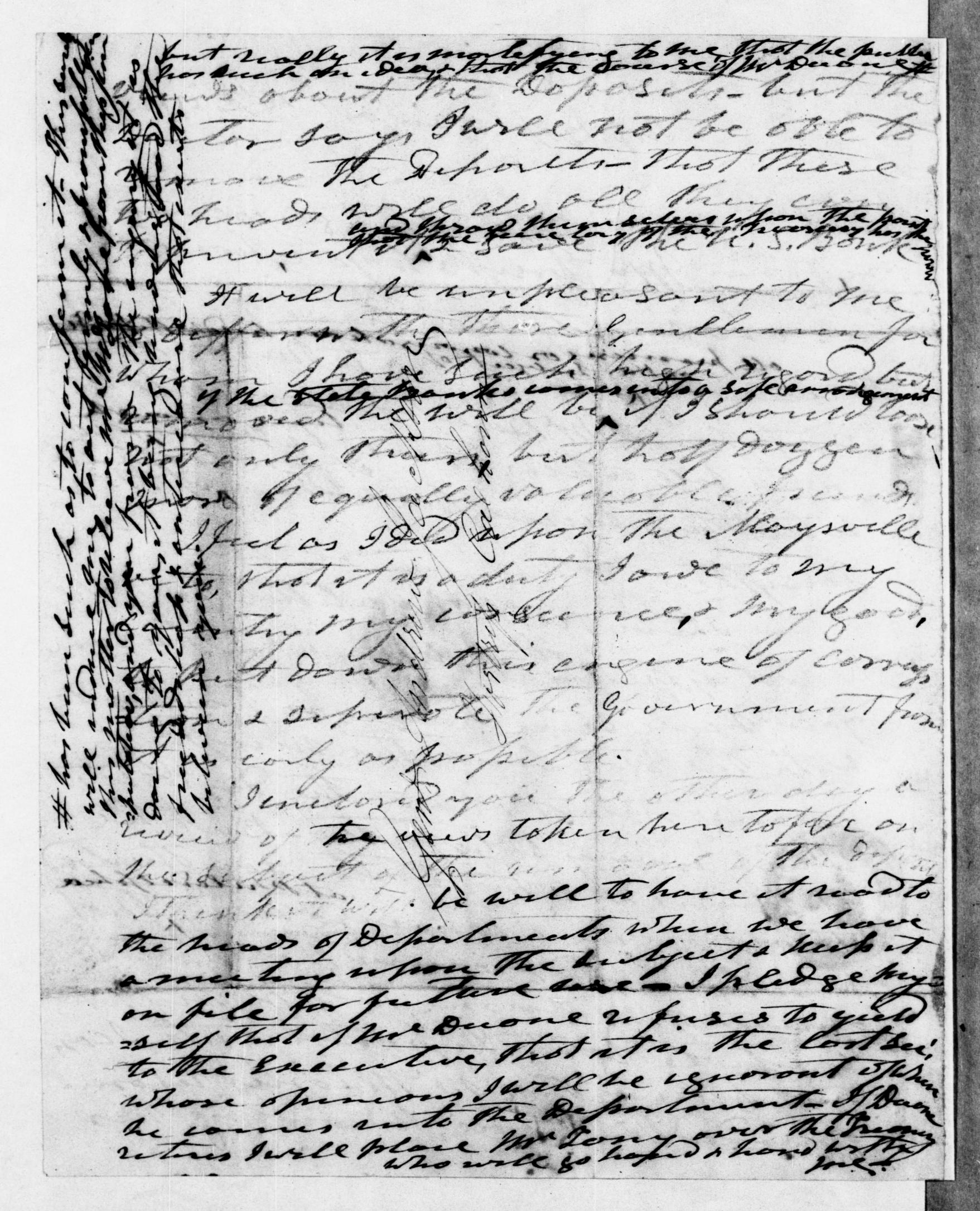 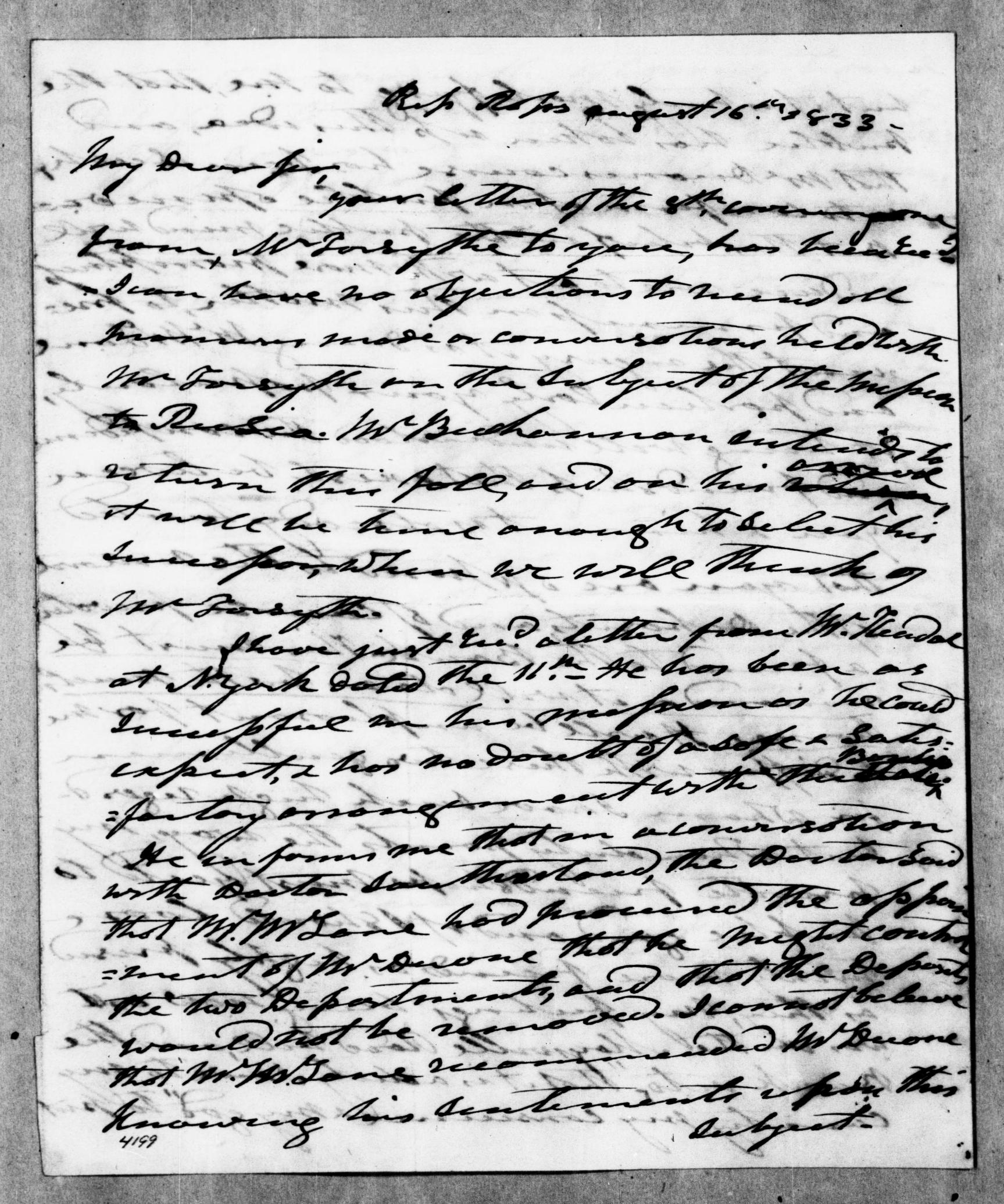 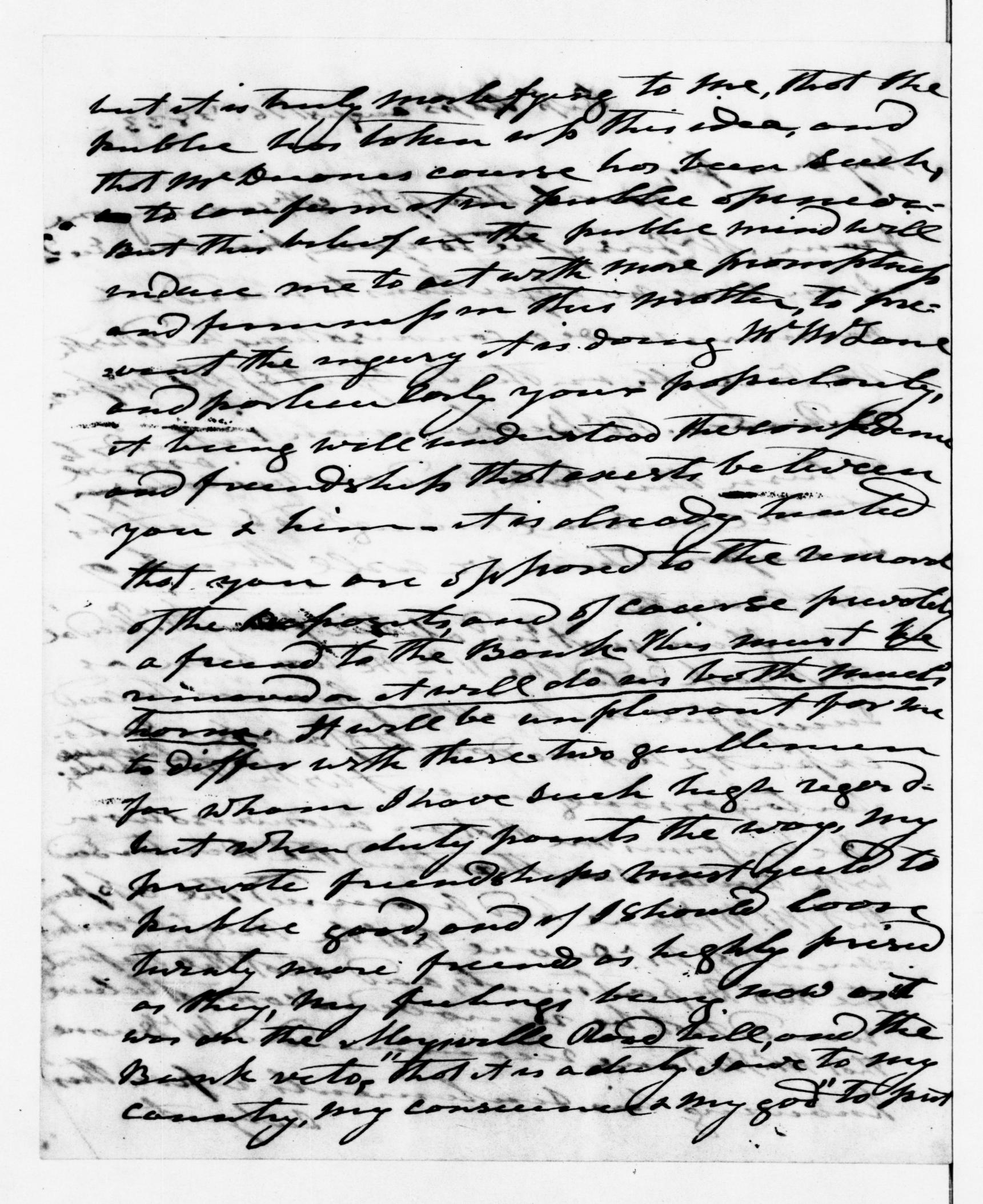 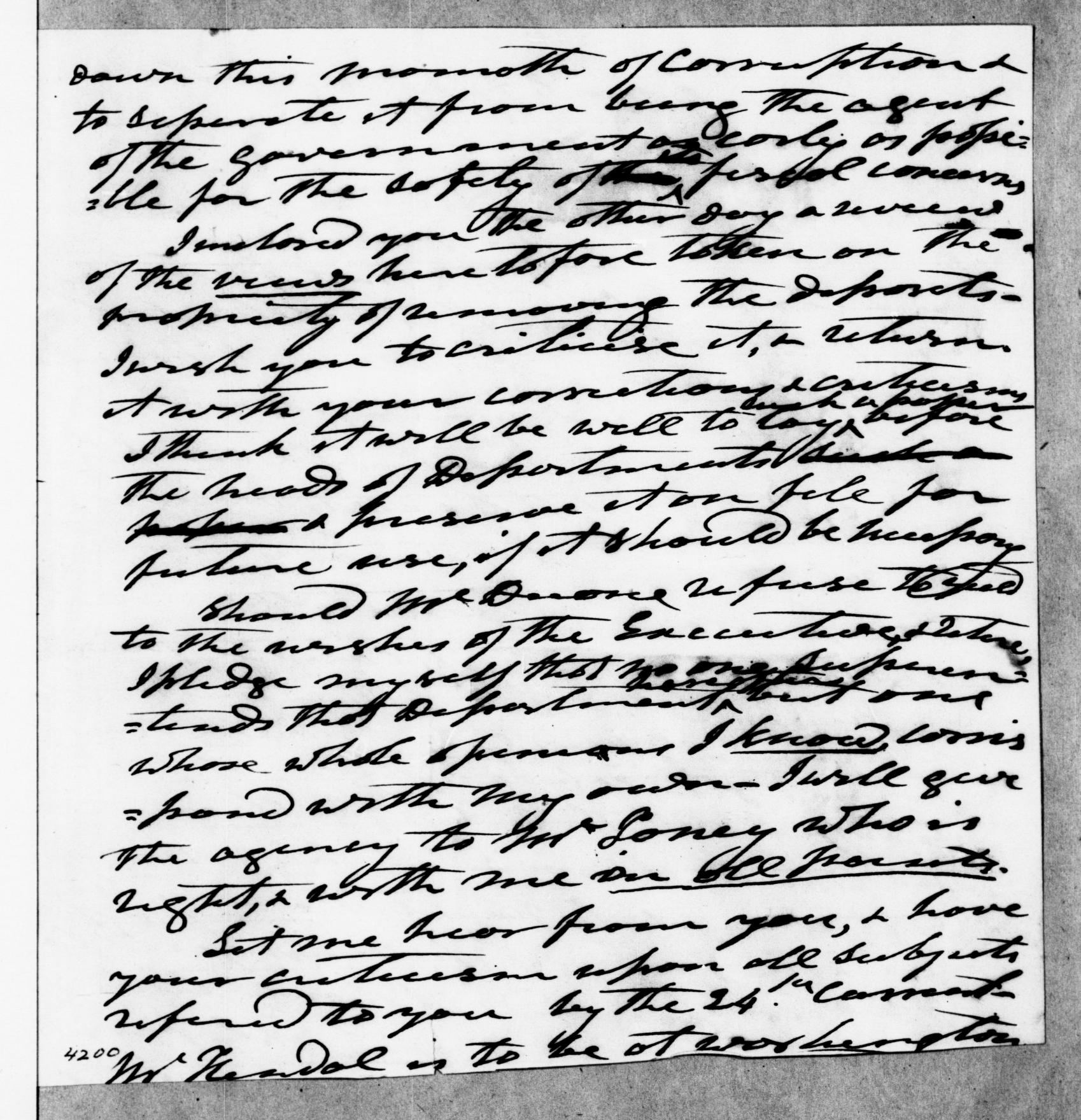 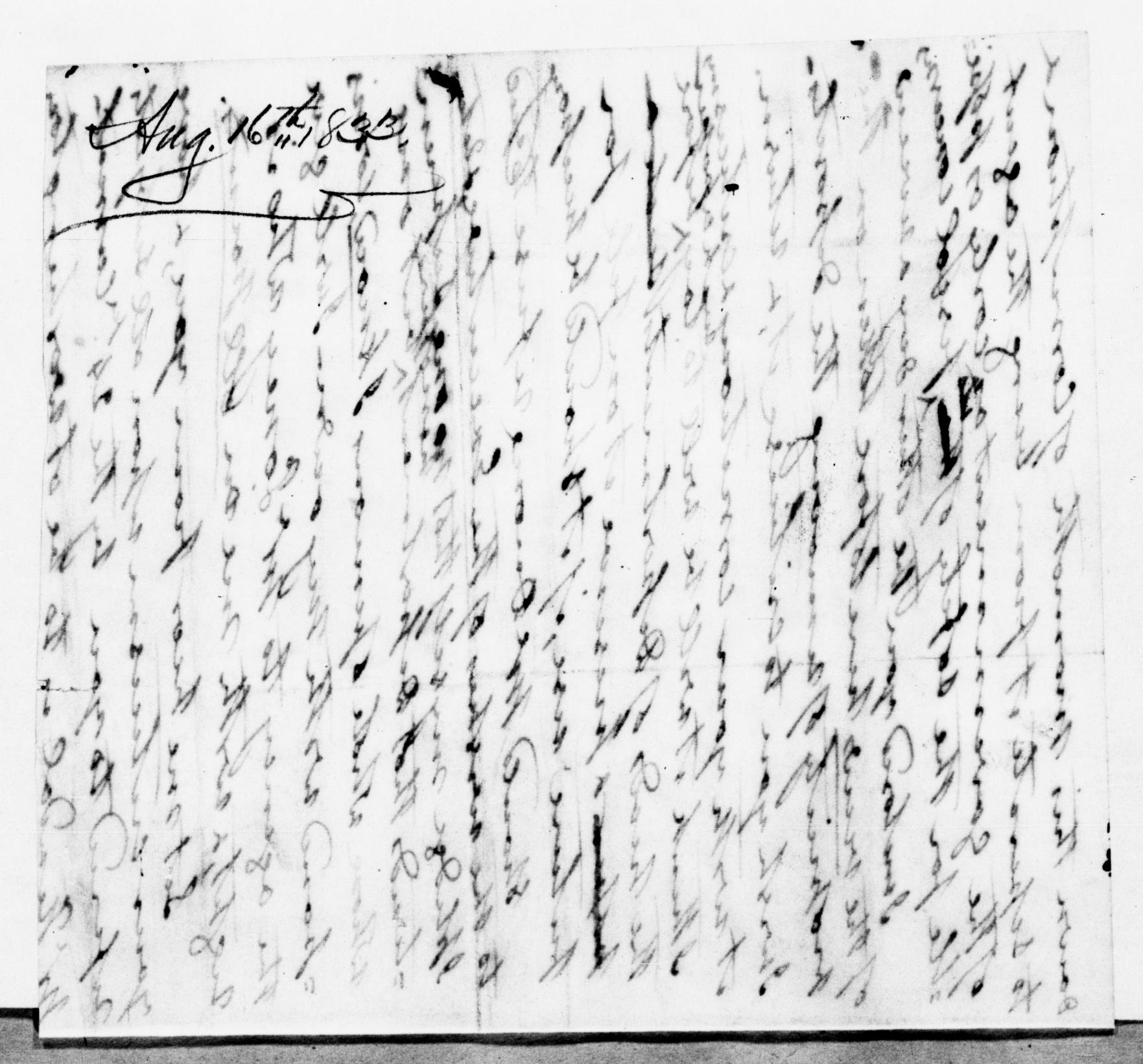 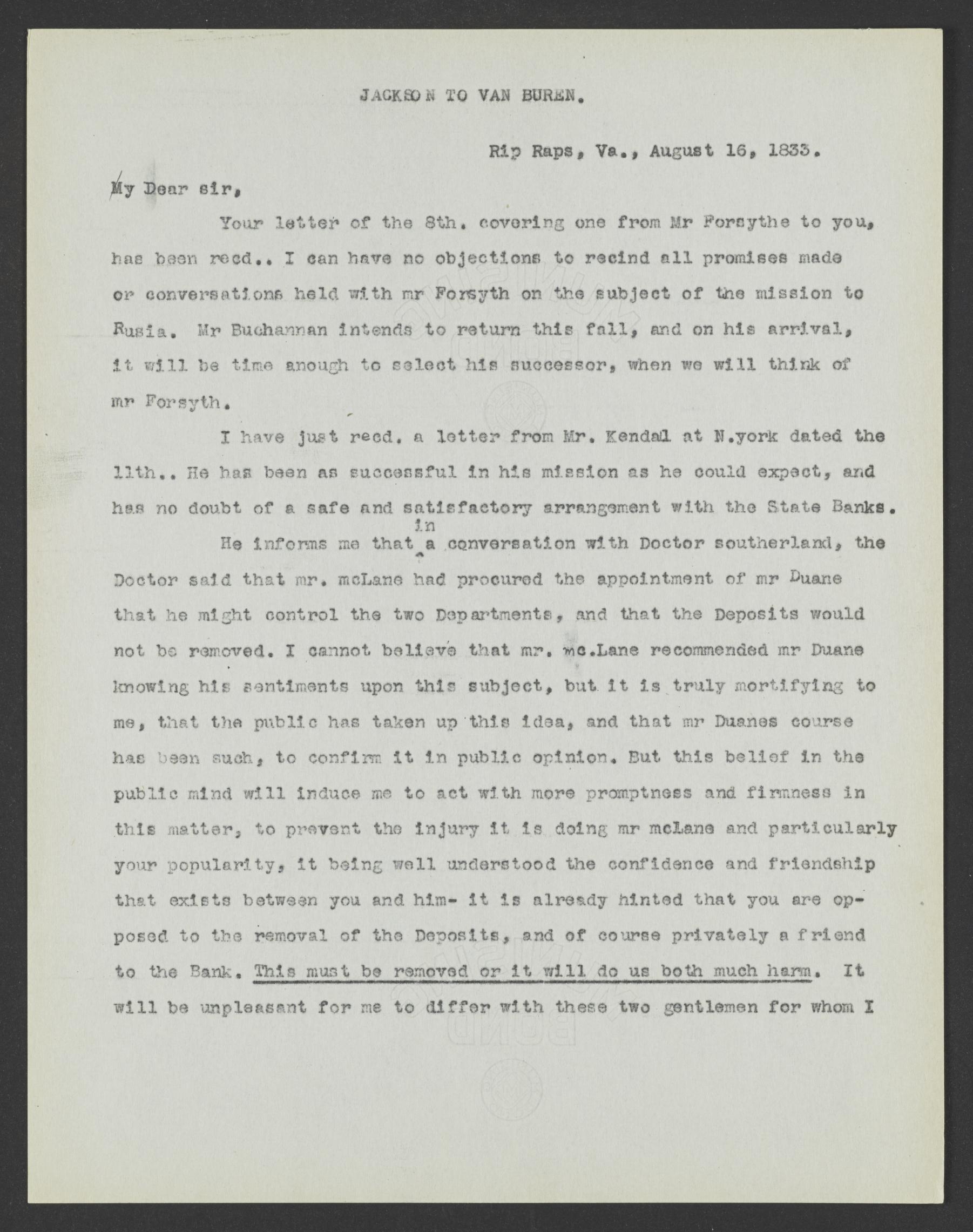 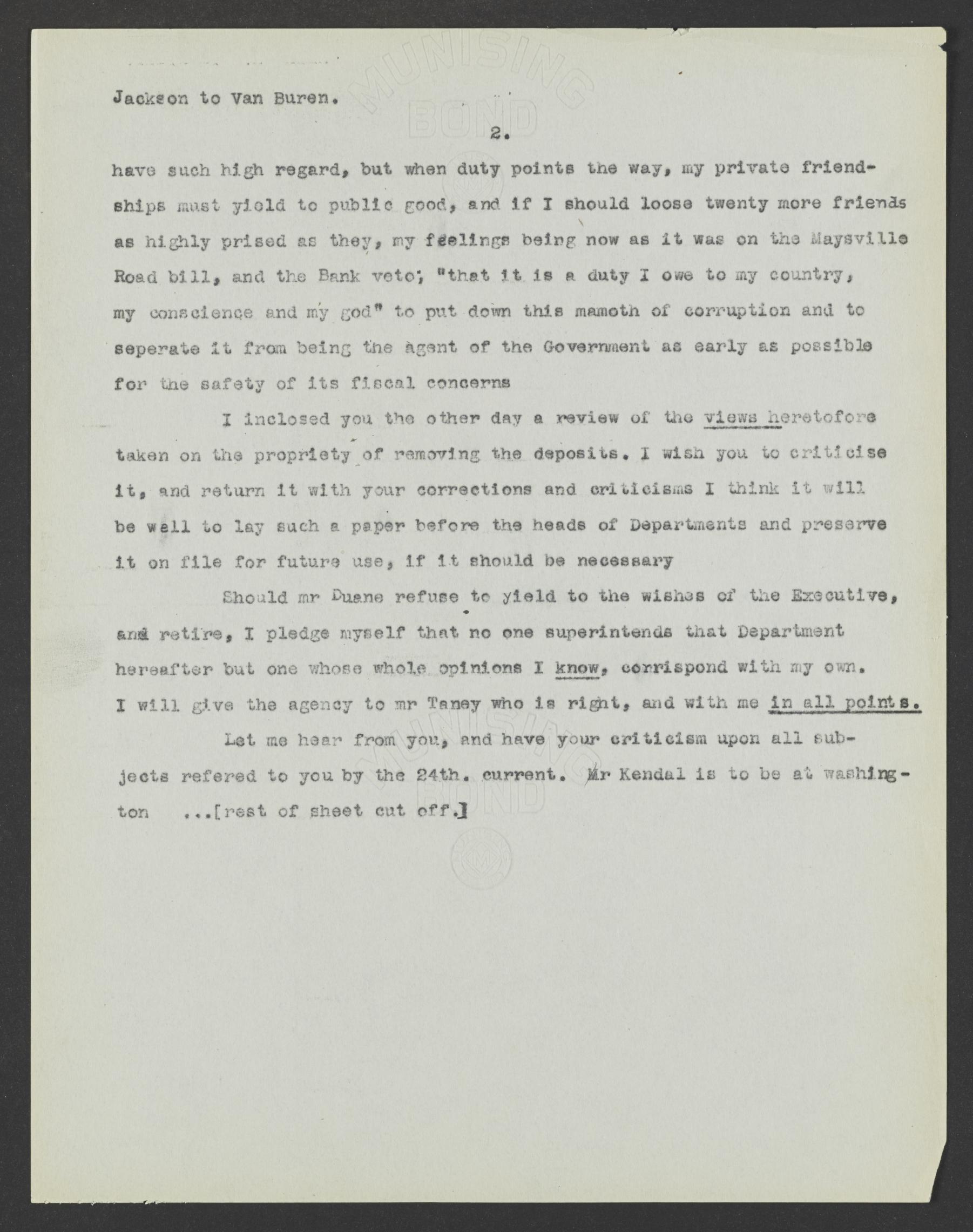