You will receive herewith enclosed the rough draft of my views on the subject of withdrawing the deposits from the U.S. Bank, which I intimated in my last I would forward for your inspection & free criticism, which I wish you freely to bestow & return it with your comments on it, and any alterations ^& aditions^ you may think proper to suggest. I have thought that such an expose would be proper to make to my executive council, when it is made known the determination to remove the deposits, if ^when^ such determination is made. It is ^predicated^ upon the ground that the state Banks, from their agreements & exposure, are not only willing, but able, to become safe depositories for the money of the people that these views are based. It is founded upon the views heretofore taken, and those of Judge White, Ellicot and judge Ellis, with the expose of Mr Taney, Mr Berry and Mr Woodbury, all of which you have seen, and the substance will be on your mind. Let me hear from you soon in reply to this, as well as to the other points ^heretofore^ submitted for your consideration. I have been lately informed by one of the Govt directors that he got a slight view of the expence account of the Bank. One item he discovered of $40,000, for printing essays pamphlets, &c &c, in favour of the Bank, and in subsidising the public journals to villify the Executive and praise the Bank. I have directed the directors appointed by the Government to examine the expence accounts & make to me a special report upon this subject. If the report substantiates the facts it will be sufficient cause for removing the deposits. As the Bank has without any authority applied $8,000, (being one 5th of 40,000) to purposes of corruption, she may apply one or more millions, drain the Treasury and stop the wheels of Government. Surely such an institution so corruptly administered, cannot be a safe depository for the peoples money.

It has recently been made known to me, that the testimony of Mr Burns director before the committee of Congress is true, to wit, that a great part of the 6 percent, which have been paid off three & four years ago remain uncalled for, and the evidence of the debt not surrendered to the government. Whether this has been an arrangement by the bank, or whether arising from the holders being dead, & their heirs and representatives uninformed of the existence off the debt I cannot say. I have called upon the secretary of the Treasury for a report of the real facts in this case, that the government may adopt such measures as will coerce the delivery of the scrip & the government be relieved of its responsibility.

I have again urged on the Secretary of the Treasury the propriety of calling in the loan office Books & putting an end to this agency of the Bank by having it transacted under his own eyes in the Treasury department, that we may ^know when we^ really have paid off, & ^<illegible>^ <closed> <it> our national debt, but here again I am met by the suggestions that the act of the 3rd of March 1817, abolishing the old commission[e]rs of loans, and transferring this duty to the Bank will prevent the exercise of this power. This [c]onstruction I will carefully investigate. If the construction intimated be the true one, then indeed Mr. Biddle was right when he boasted the Bank was beyond the controle of the Government, and I would not be astonished if we order the deposits removed, that <it> ^he^ will rebell against our power, & refuse to yield the public money in their vaults, to the order of the government. Every investigation developes some more corruption of this mamoth of power, & brings to view the necessity of seperating it from the Government as early as possible. I am determined as to myself to meet it boldly, & fearlessly, regardless of its threats of the senate to reject my nominations, or that congress will order the deposits to be restored to it. This is a power that does not belong to congress. It will be found that when the deposits are removed for cause, corruption, that congress cannot order them to be restored to this unconstitutional corrupt depository, but must find some other place, if it attempts to interfere with the powers of the Executive Branch, it must, to be successful, have two thirds, and where can the public funds be deposited but in the state Banks. There are none others.

I have called on Mr Taney for his opinion of the law of the 3rd of March 1817, and on the power of the Executive Government over the loan offices. ^I would like to have yours.^ If I have the power I will change this agency.

My health is somewhat better but I am laboured much with business sent after me which will induce me to return to the city earlier than I intended. I will return so soon as I hear that Mr Kendall is returned to Washington, before then, I shall be happy to hear from you. I write in haste, keep no copy, nor have I time to correct it. 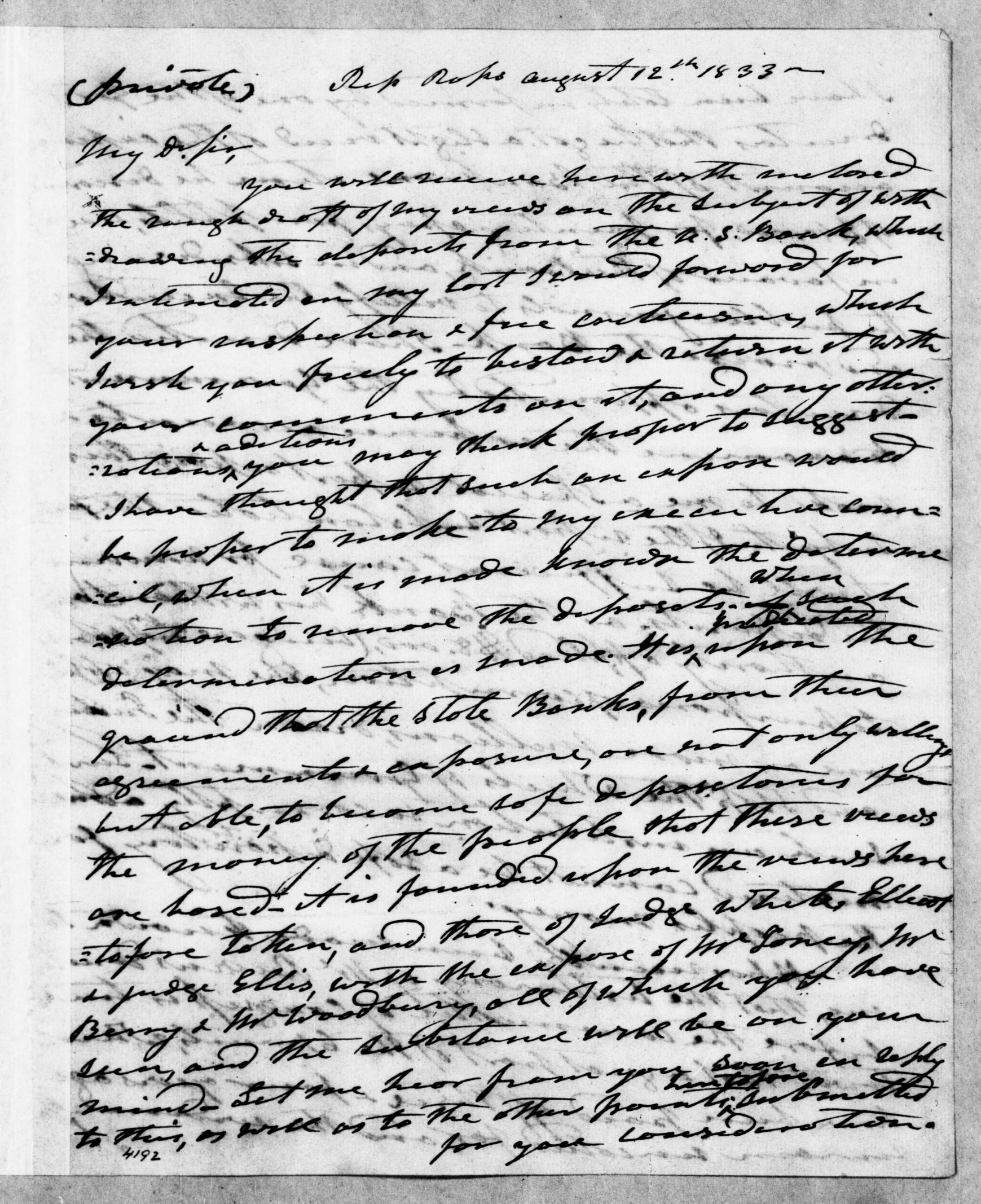 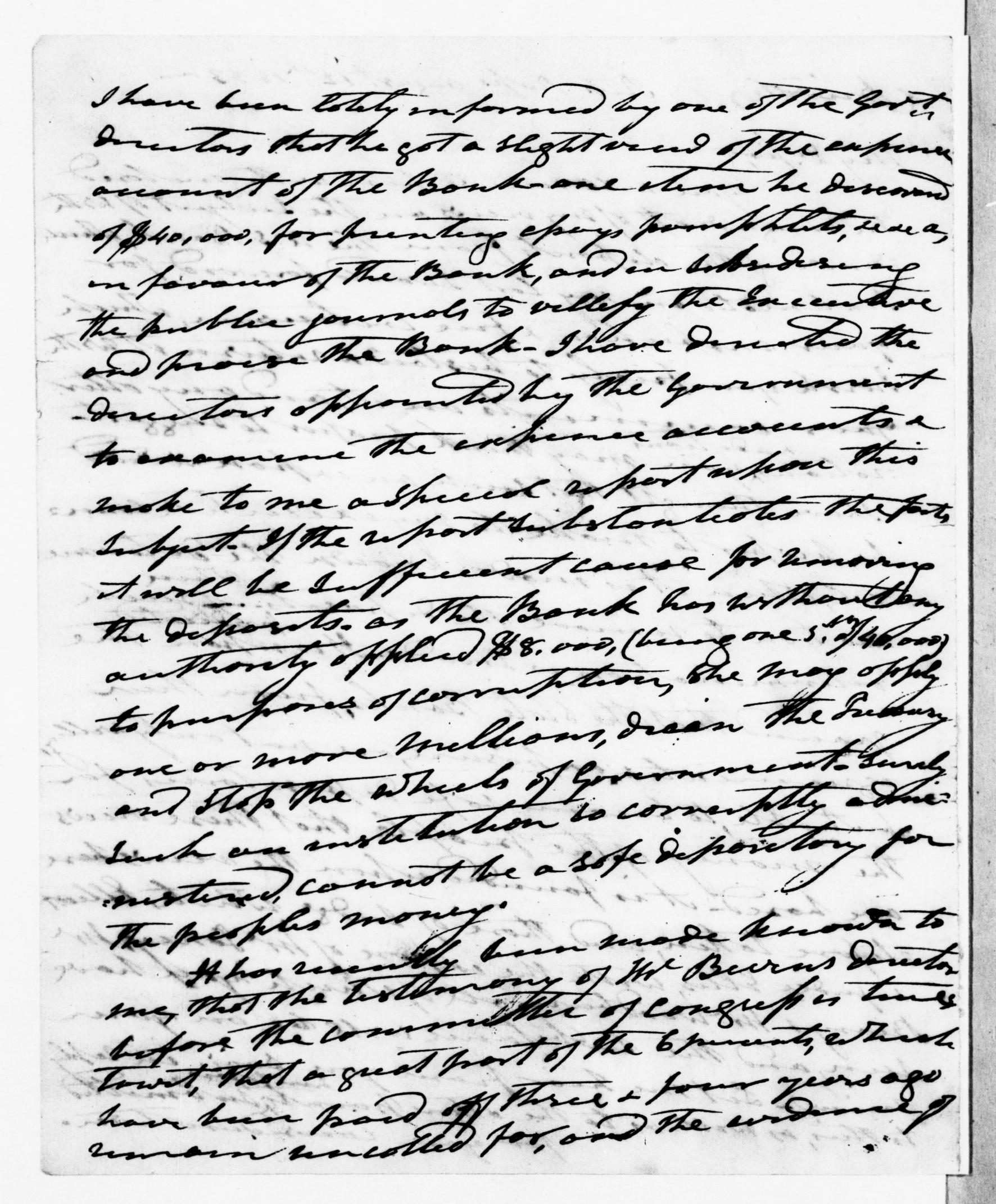 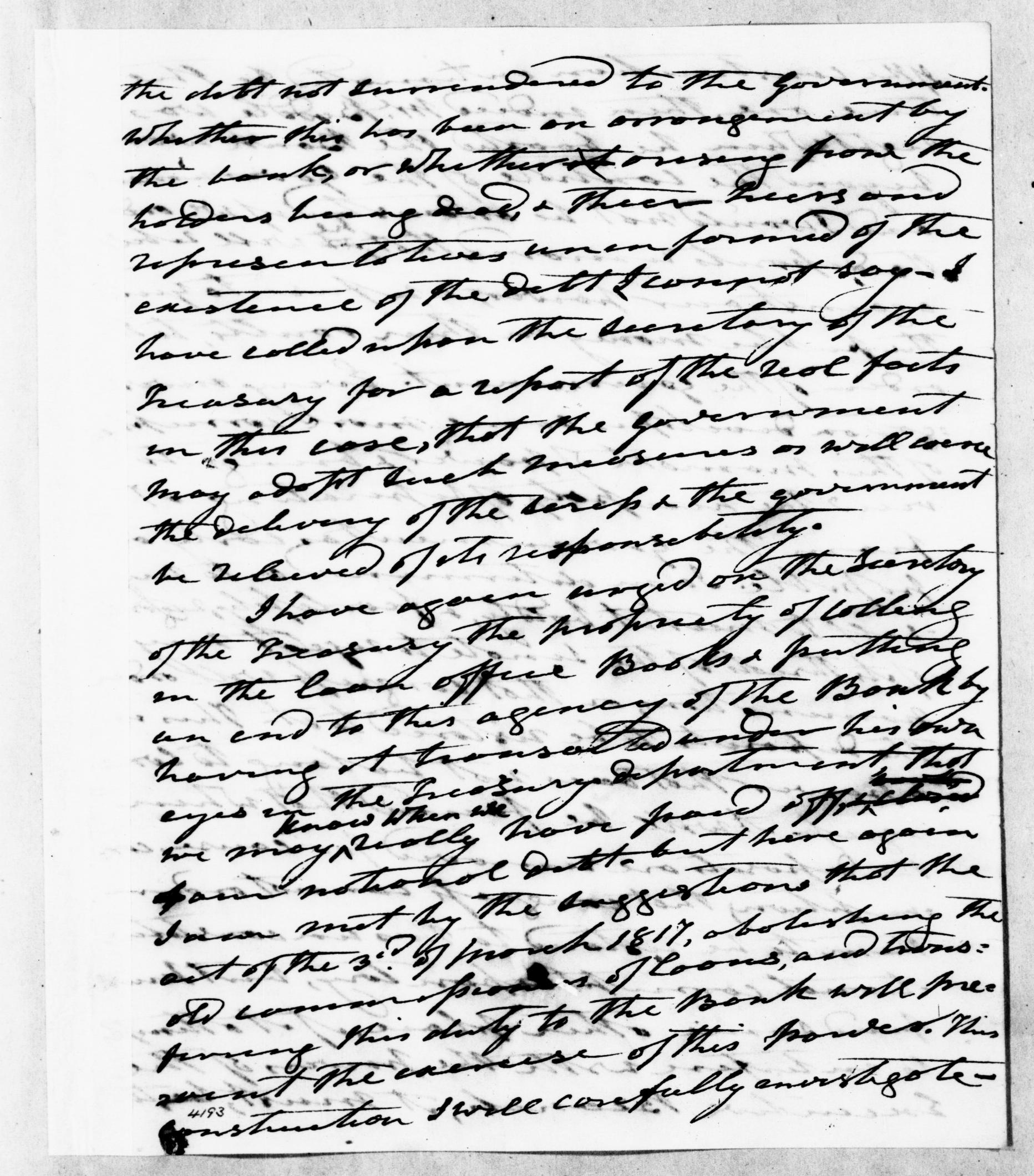 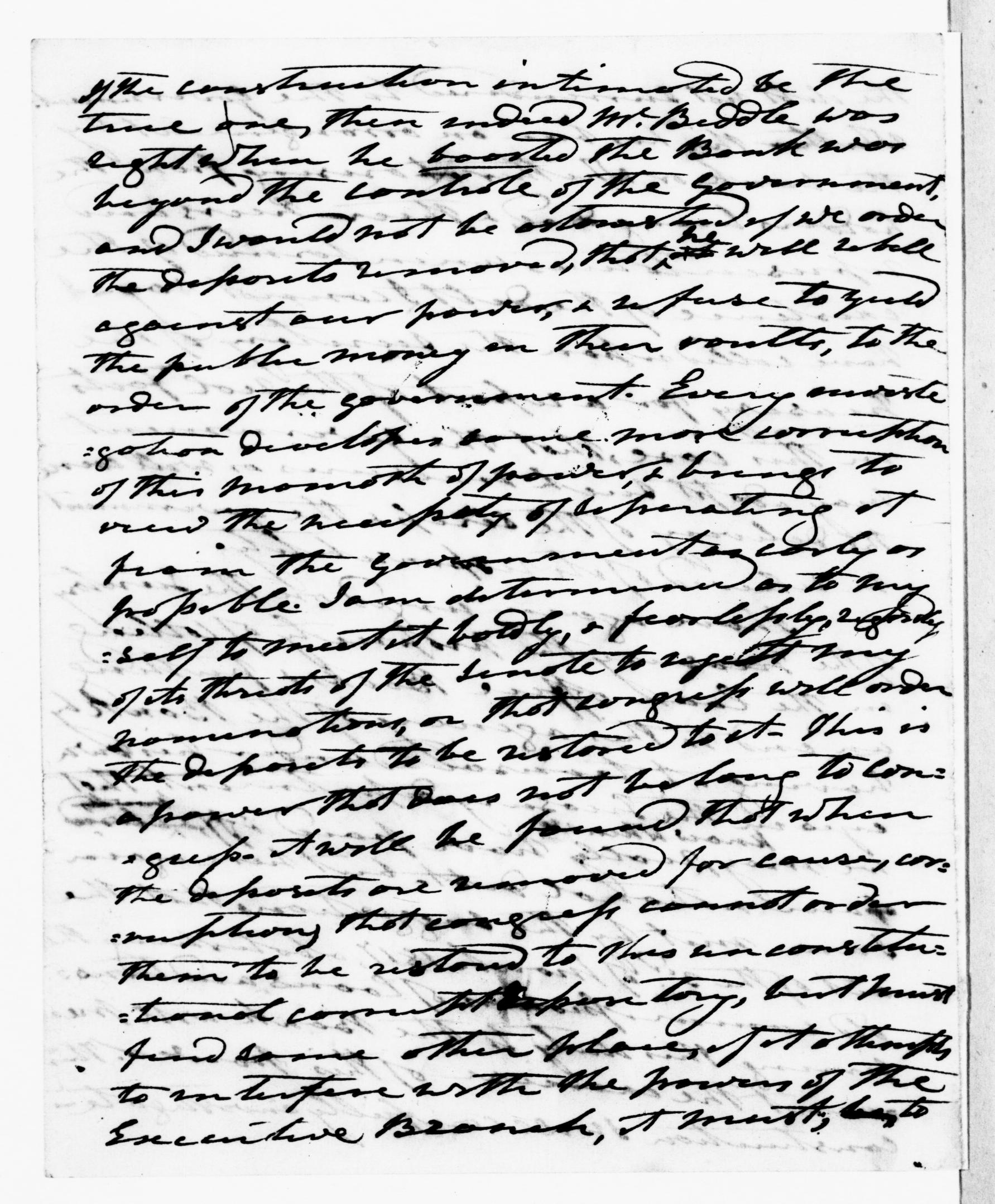 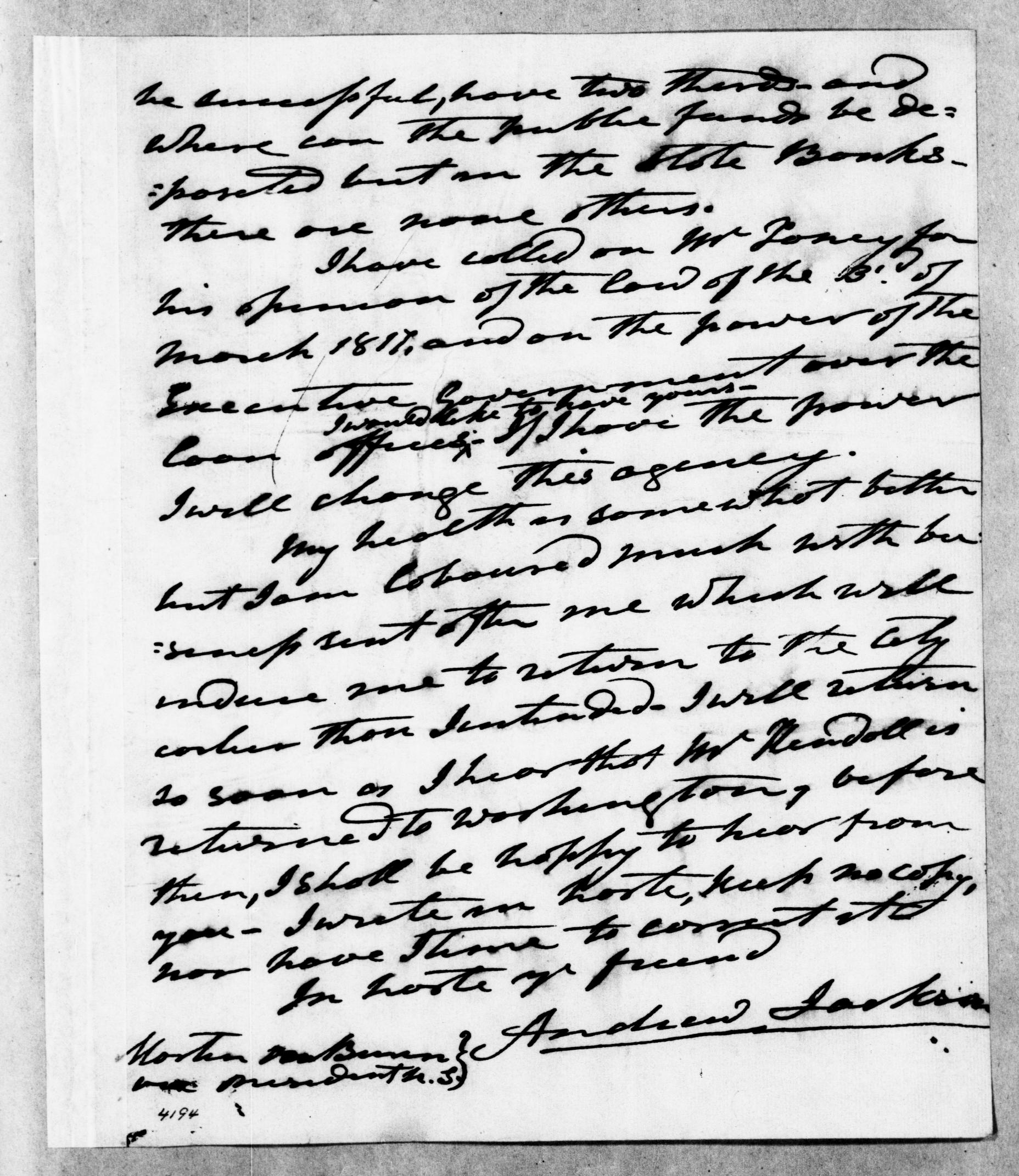 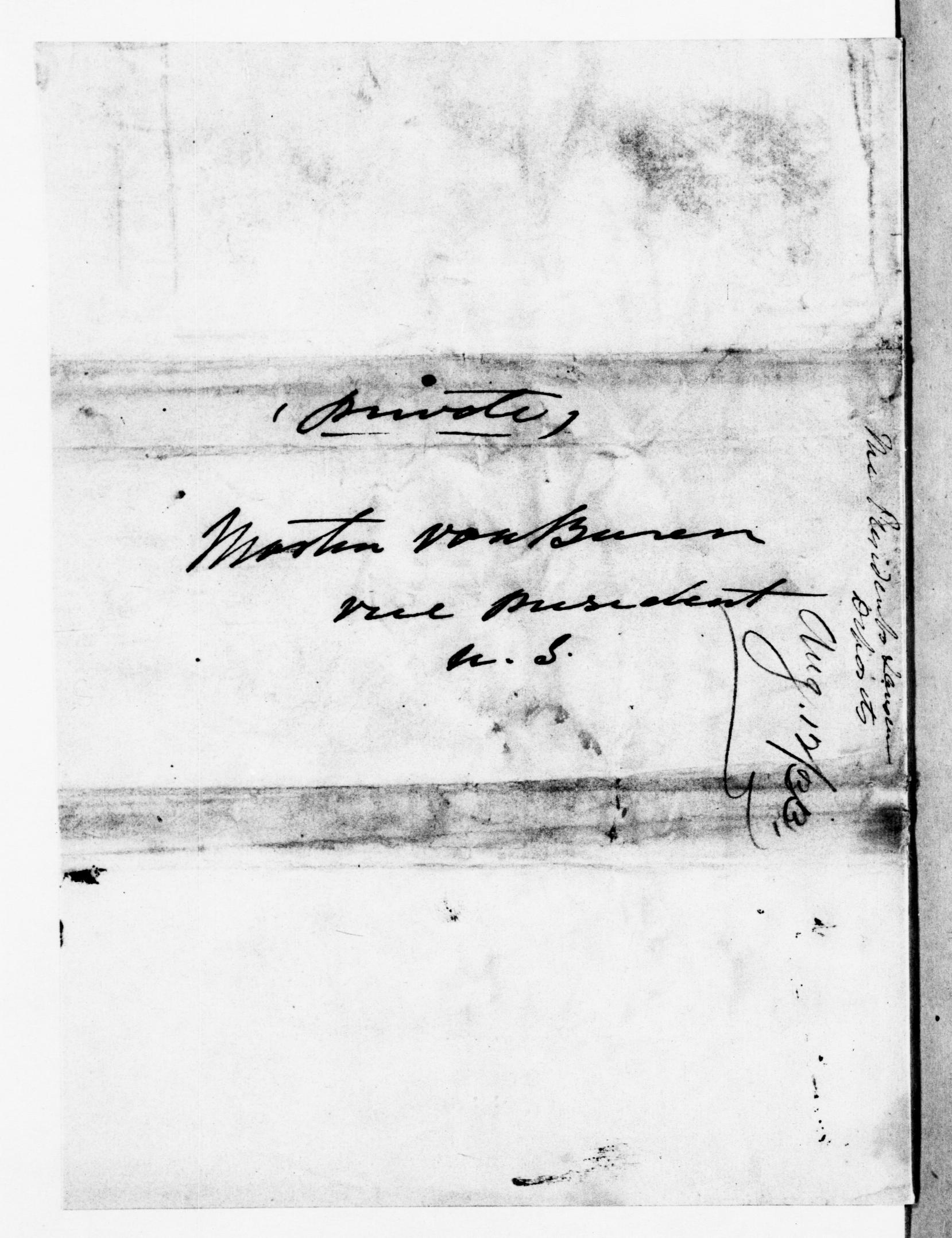 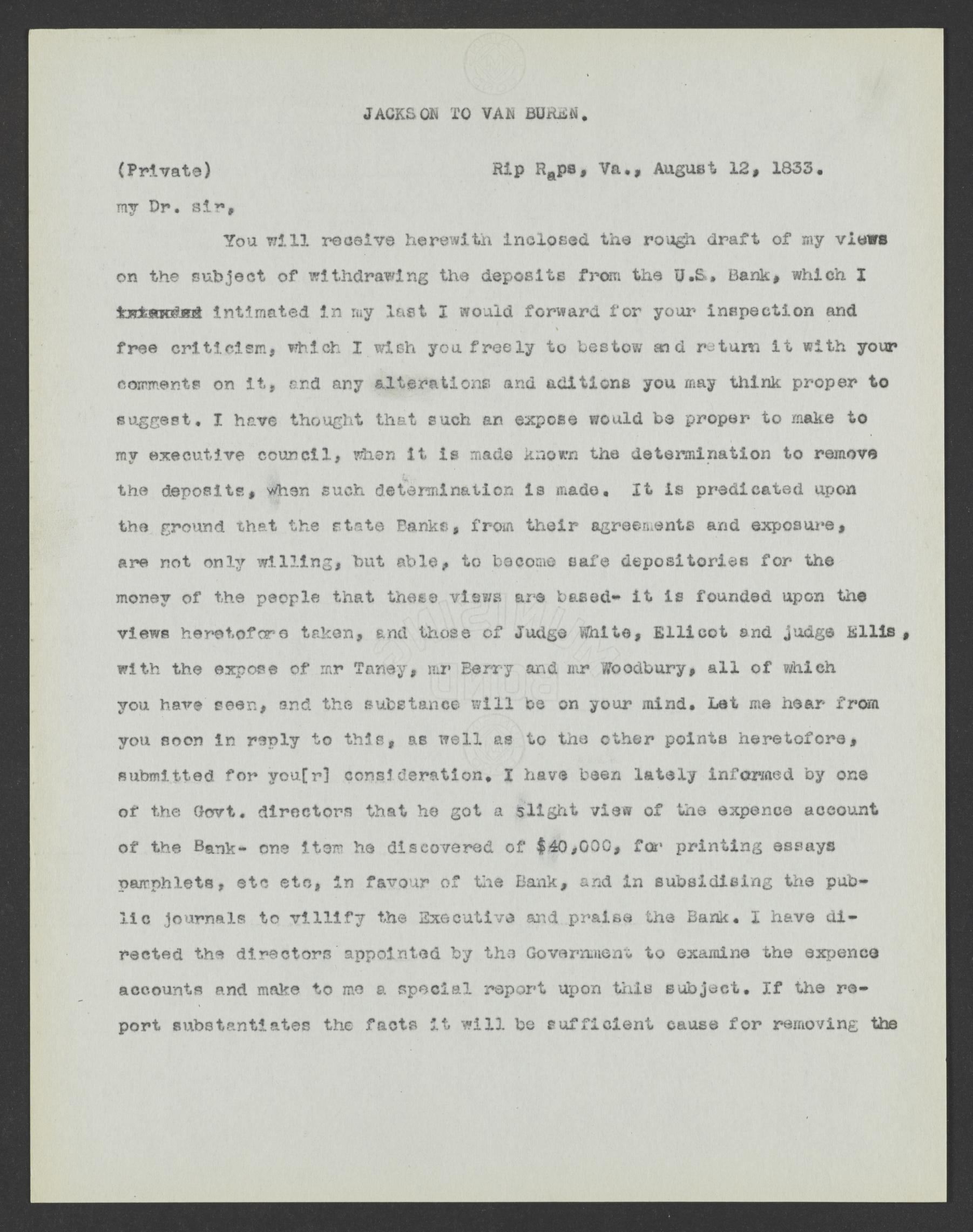 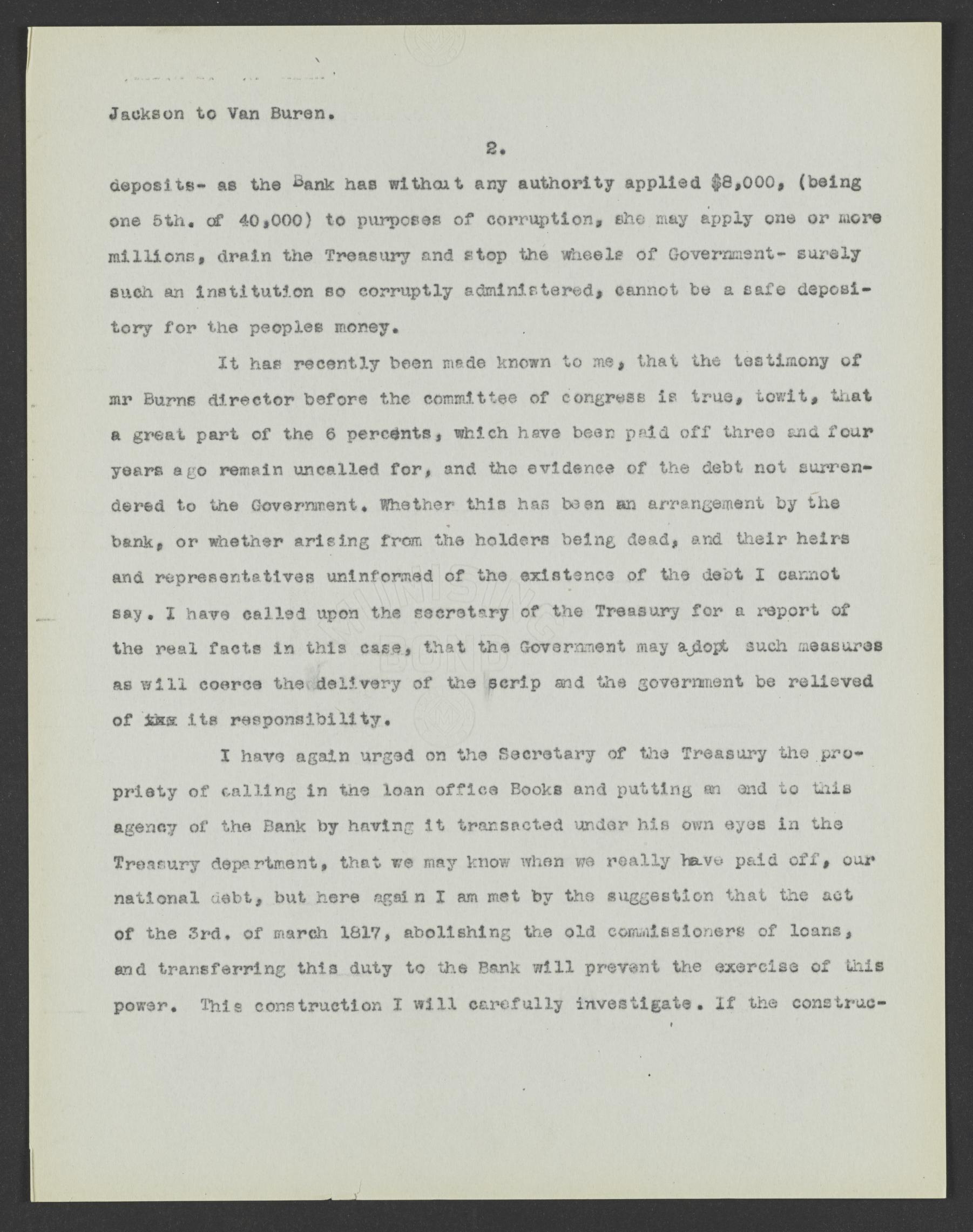 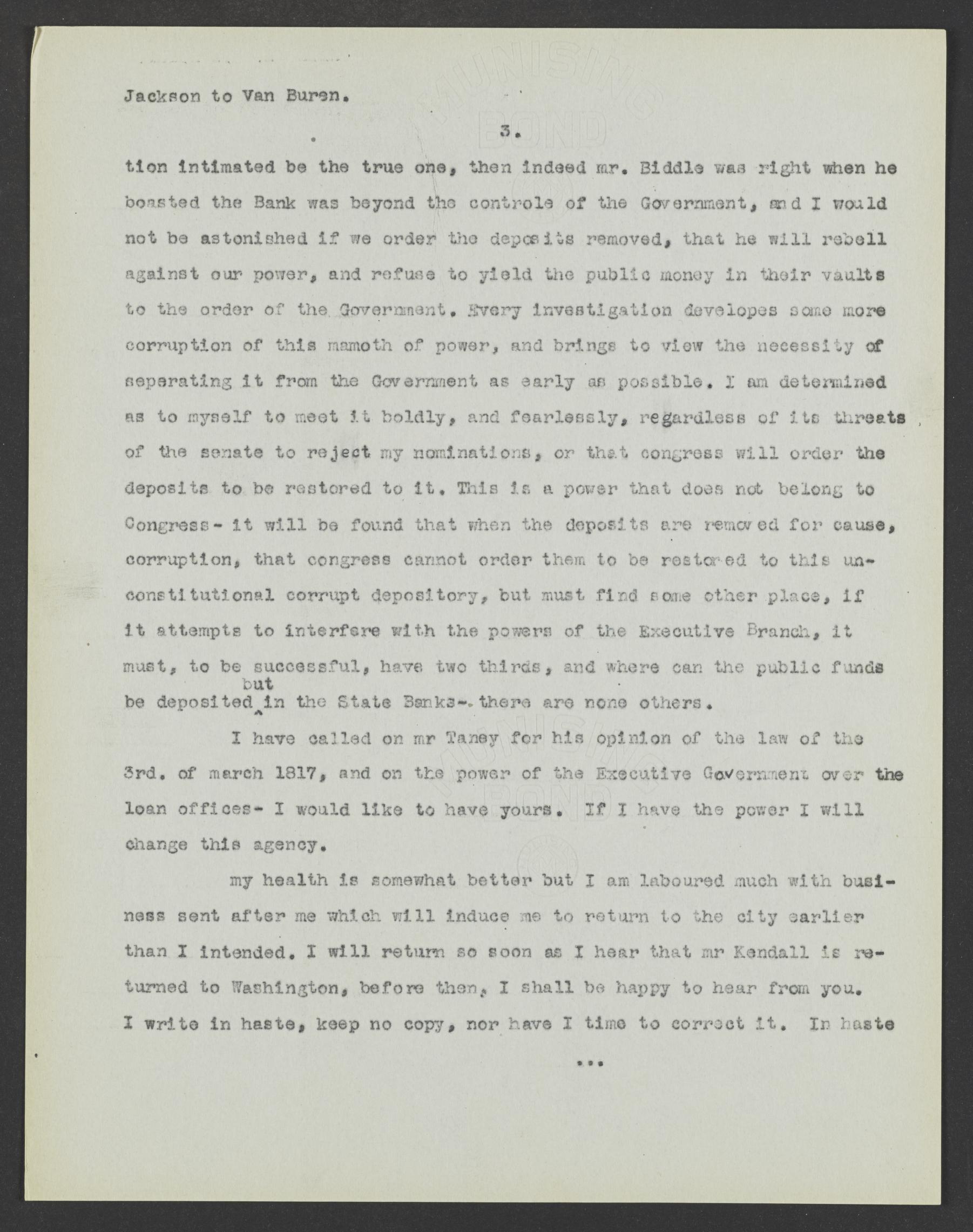