The enclosed letter from Mr. Croswell will put to flight Mr McKeans pretence. I am almost sure that I wrote a letter to Ingham, & have among my papers his reply, but as in this I may be mistaken, I have thought it best, for the present, to say nothing about it. Your letters have I believe all been recd. & shall be attended to. Mr Slidell is here, of course under very considerable excitement, but preferring to behave well, (I think), if he can do so. If he could be honorably relieved from the injurious effects upon the public mind of his displacement. I told him that an acknowledgment of injustice on your part was out of the question, & that a measure of revenge agt. Gordon, if within his reach, ought not to be desired by him. I then stated that I had proposed to you to appoint him Commissioner under the French Treaty, but and that the Consulate to Havanna had also been spoken of, that the first <illegible> ^had been^ rendered impracticable by for by a previous committal, & that we concluded he would not take the latter, but that from the manner in which you recd. the suggestion I was satisfied, that you entertained no prejudices or unfriendly feelings agt. him. I stated my reasons in making those suggestions to be, to protect him agt. the influence which might arise from the failure to reappoint him, & the only remedy which the case admitted of. I told him further that I was not able to say, whether or not subsequent events had worked any change in your dispositions towards him, but if not, I thought it possible that such step might yet be taken. These views, with an assurance that any supposed effect which the dissatisfaction of himself or his friends ^might have^ upon the politics of the state would not weigh a feather in <illegible> ^your ultimate^ decision, seemed to have a favorable effect upon him. He informed me that his business in N. Orleans was worth $10,000 a year to him ^& that he meant to continue in it at all events^ that there was positively no office in the gift of the Government which he could aspire ^to^ that he would take but that he would not conceal from me, that the offer of any place of sufficient respectability to wipe away the effect of what had been done, such as Chargé, would be very grateful to his feelings. I promised to converse further with him. I am rejoiced to find by the tenor of your last letter that there is any prospect of a speedy & effectual restoration of your health. God grant that it may be so. I go to Nyork on Friday to put Smith under the care of Mrs. Livingston for Paris, where I have determ[. . .] to send him to complete his education. The <illegible> sails from <illegible> on Sunday. I hope to return to this place on Tuesday. Remember me very kindly to your son & daughter & Mrs. Donelson and her children & to Mr & Mrs Blair & to Major Lewis & Col Earle

& believe me your friend

[Written on the left-hand margin of the first page in MVB’s hand]: Mr Blair may do with Mr Cs. letter what you & he think best but I should prefer to have no publication 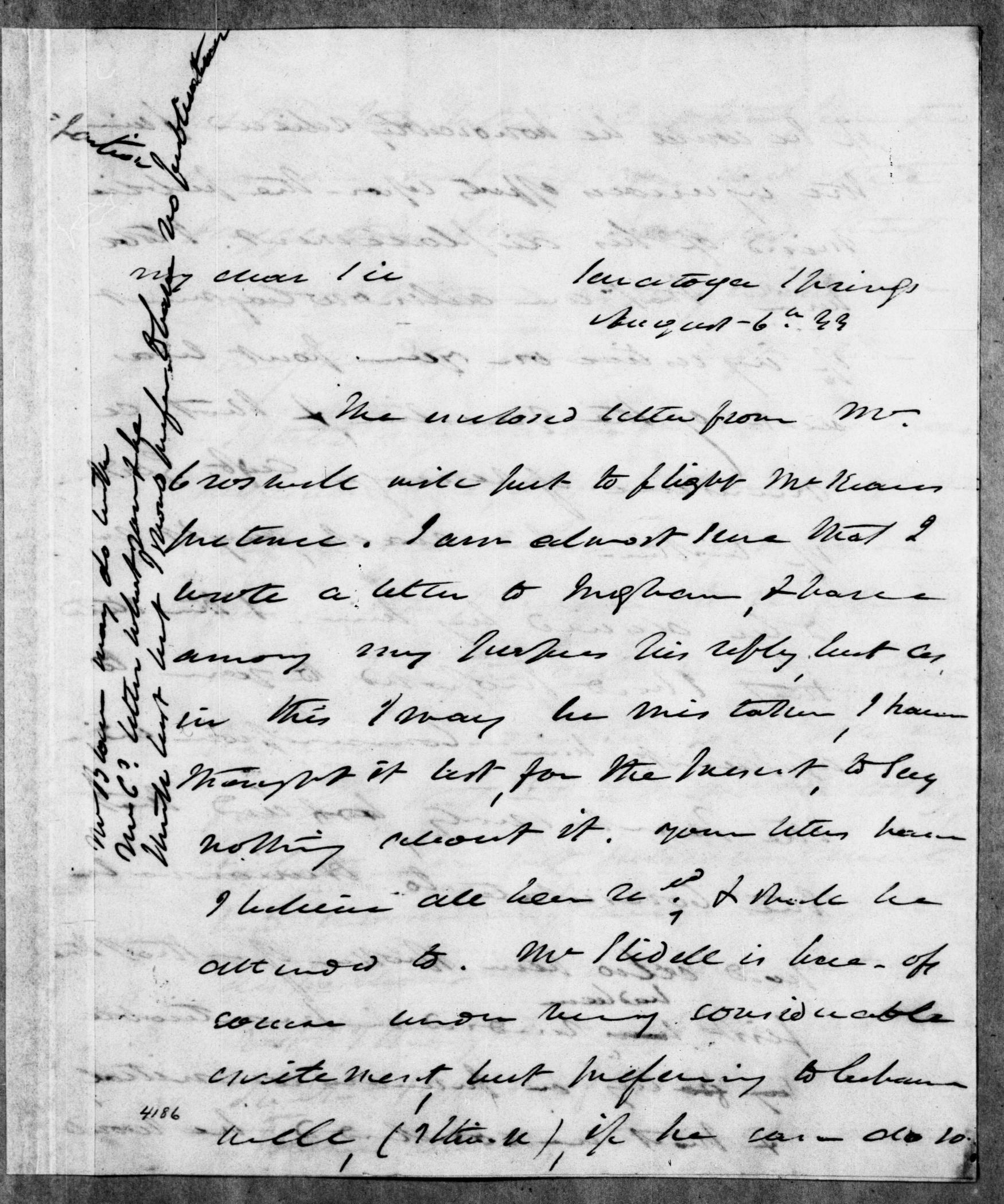 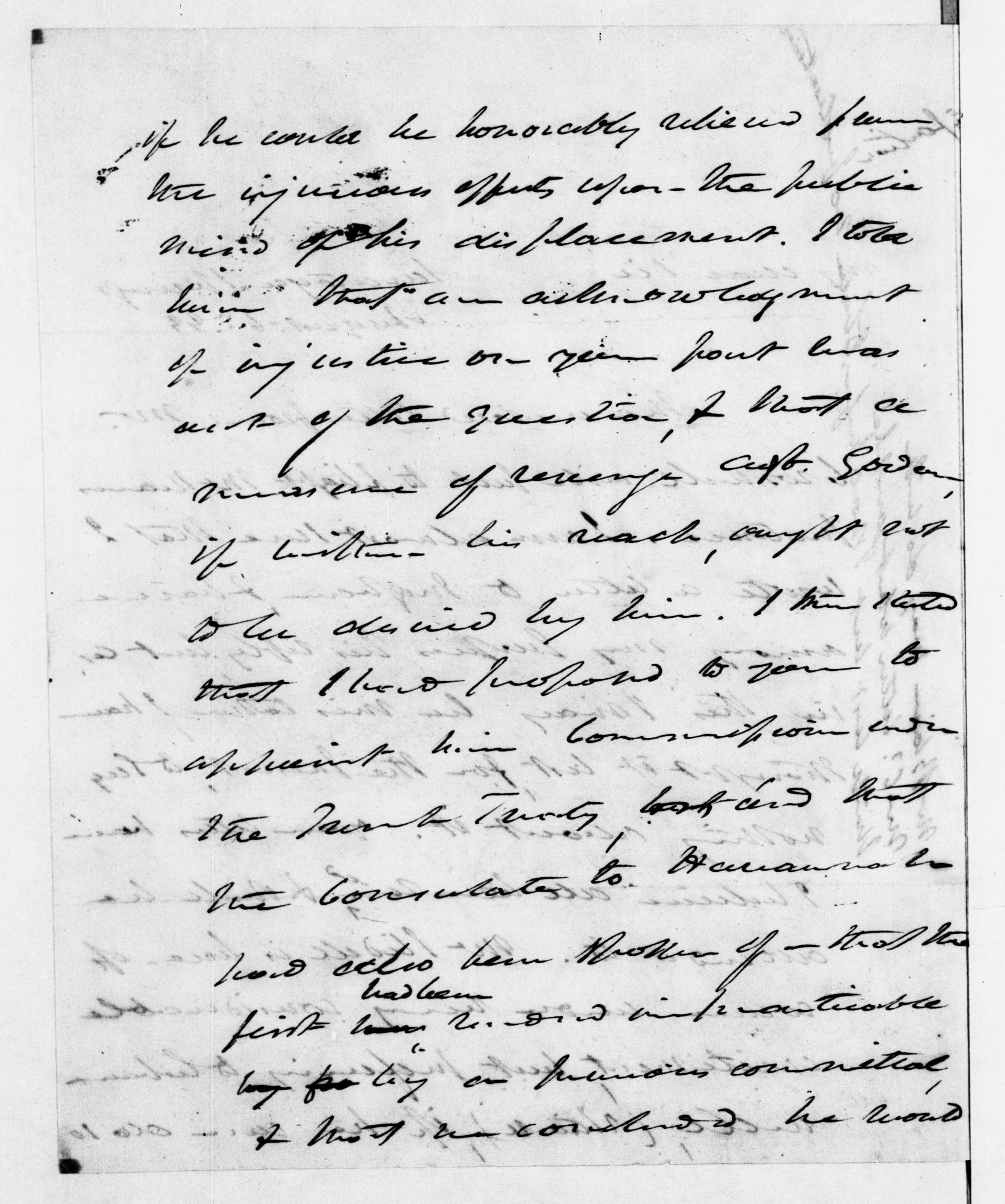 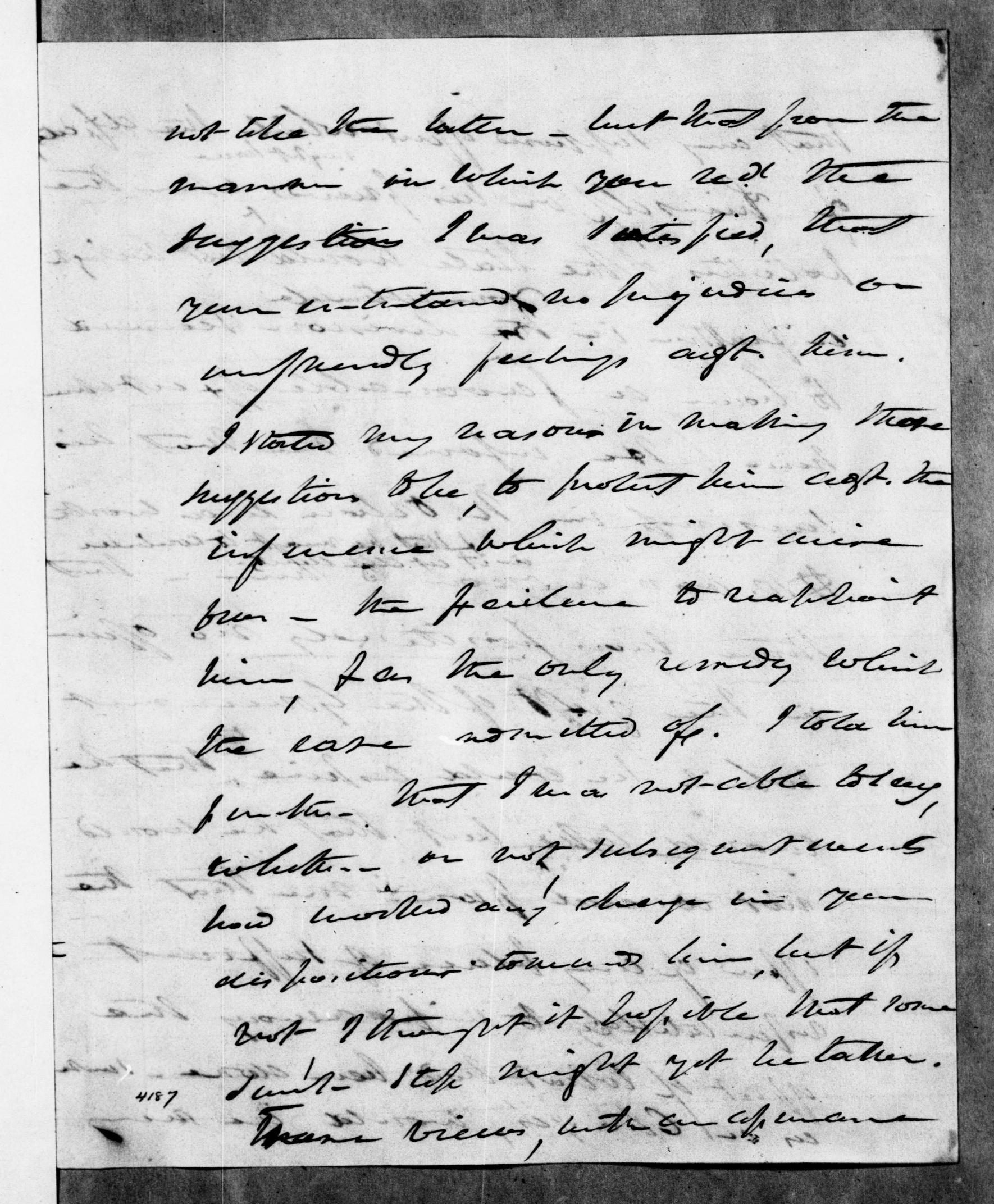 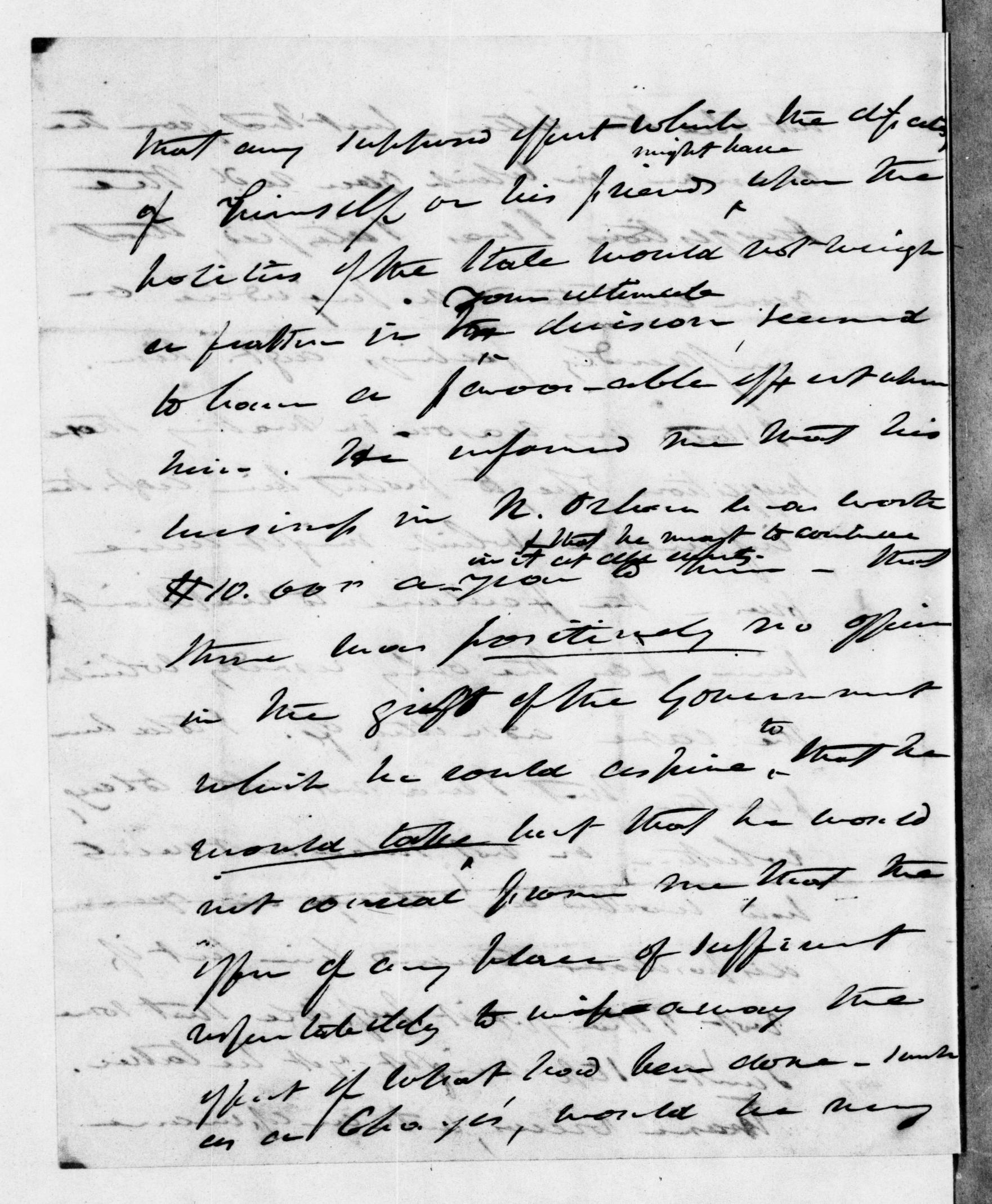 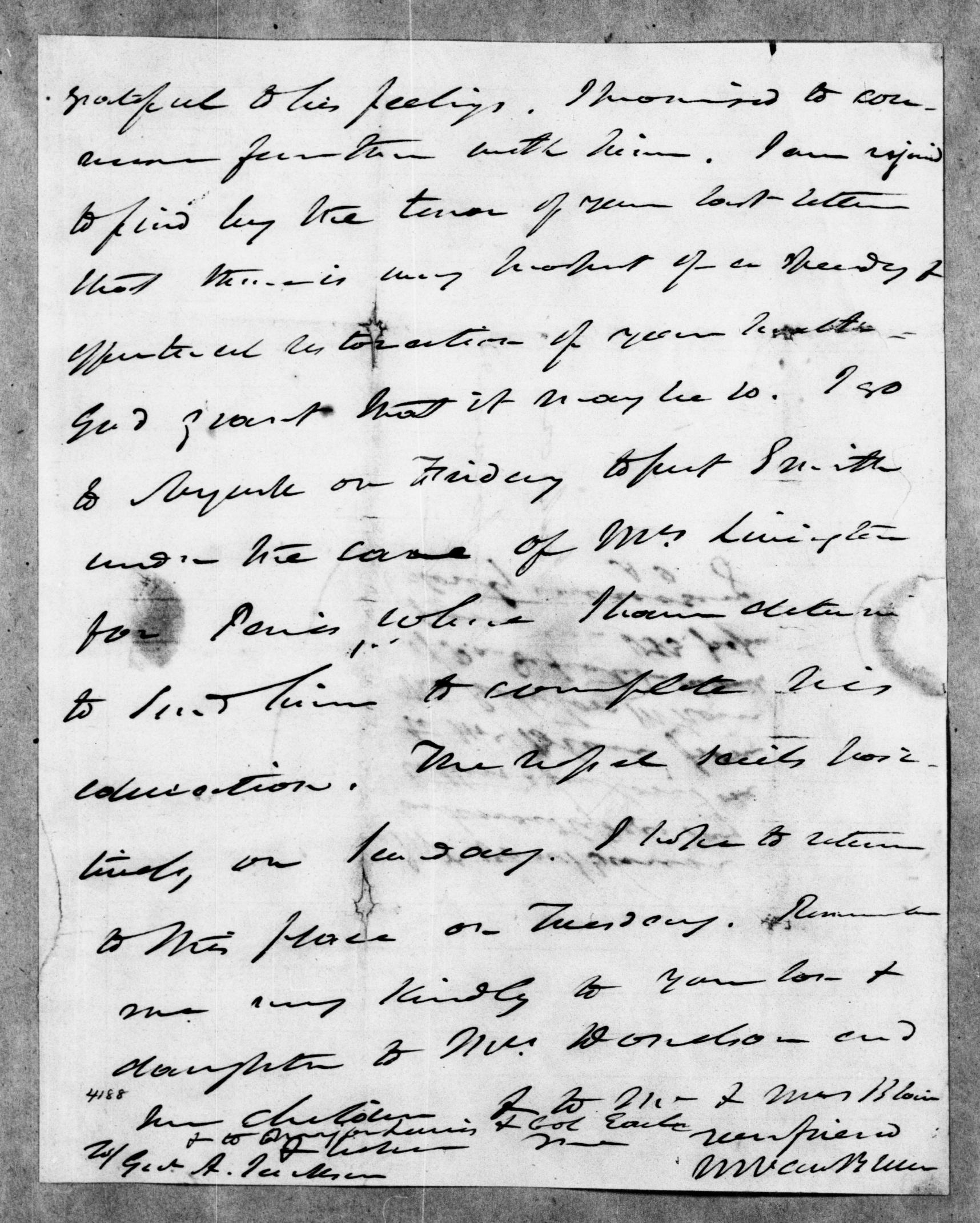 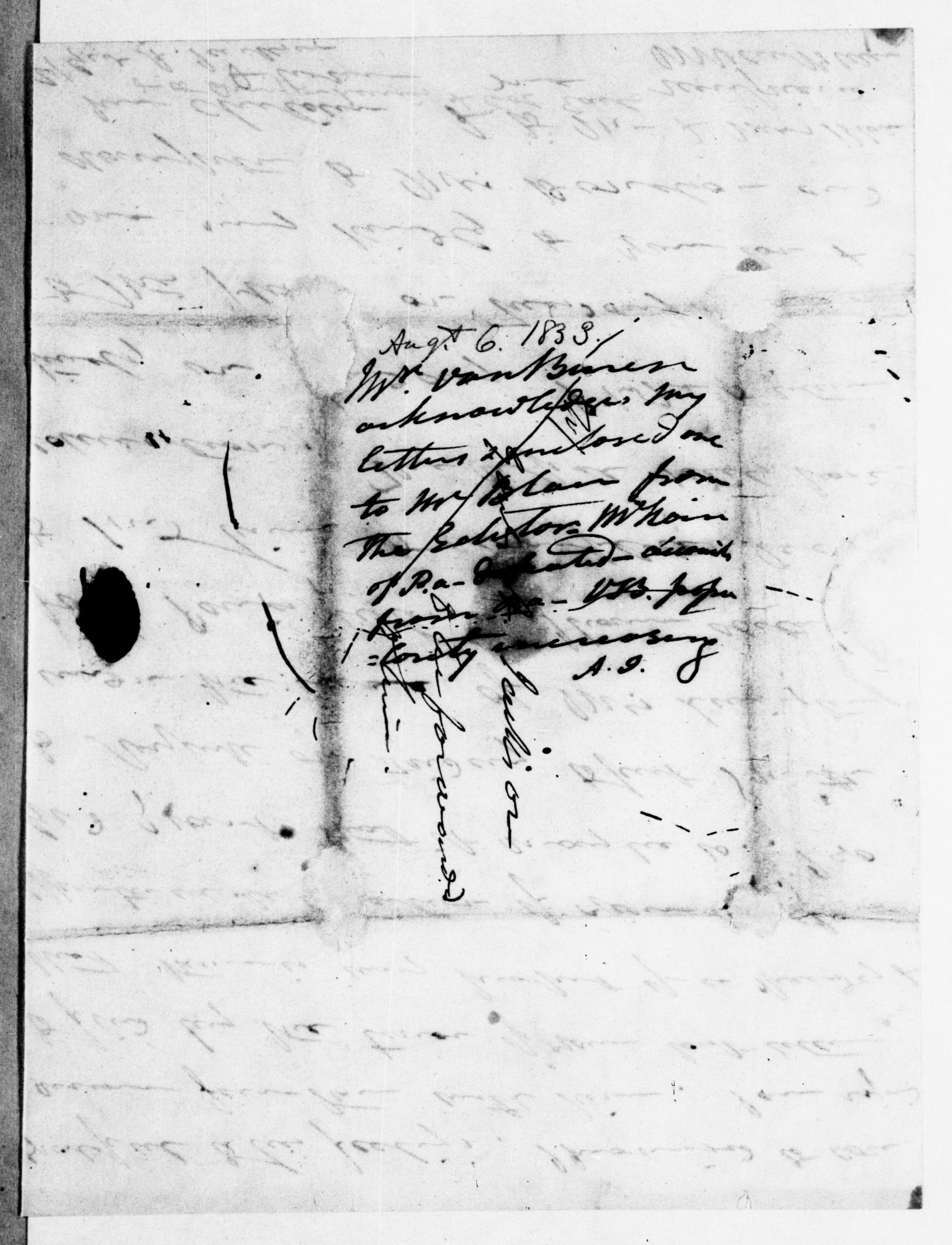 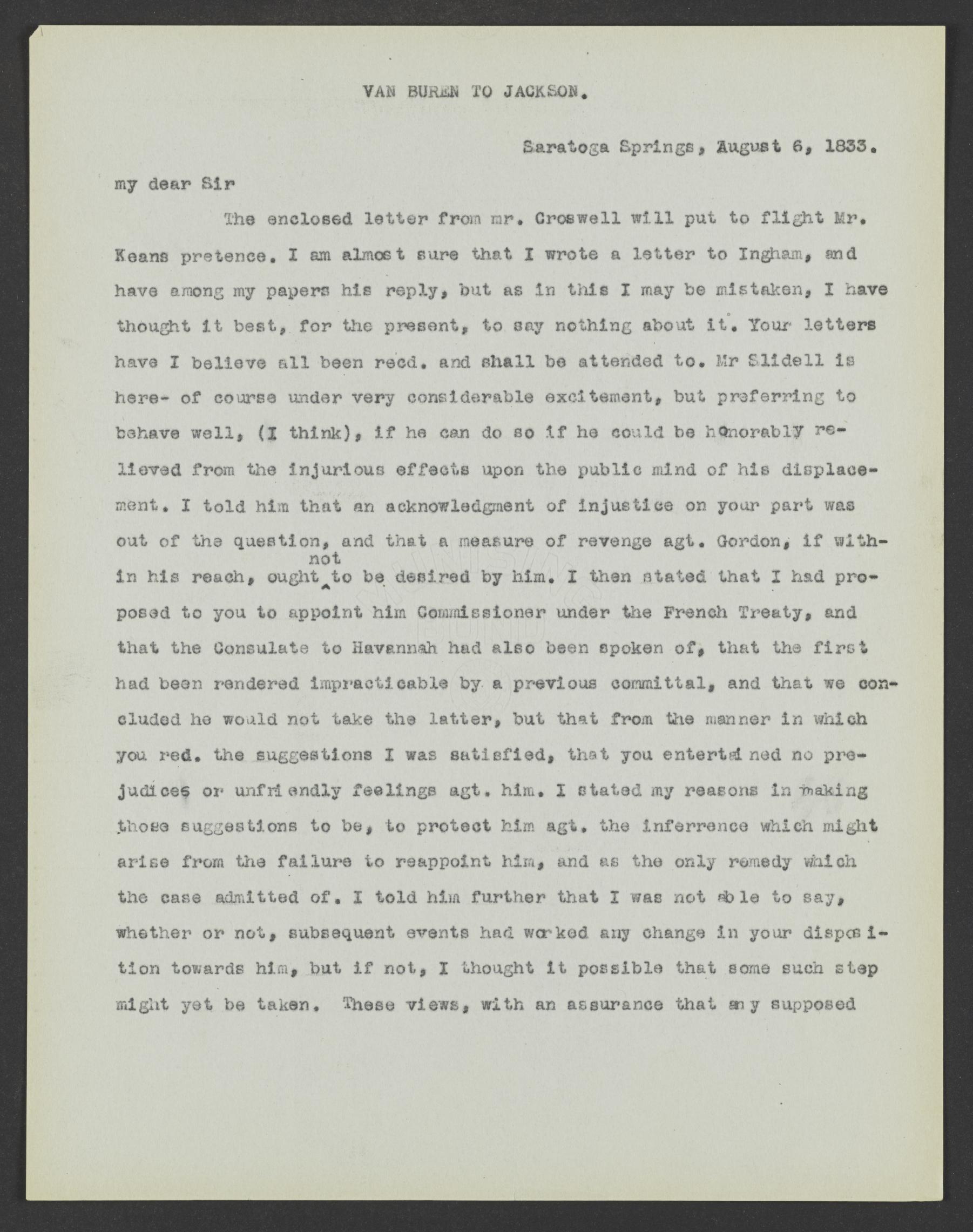