I am still here, no Steam Boat offering before friday next on which day I expect to leave here for the Rip Raps, my health is not good, I am much debilitated, & the hot weather and the business on hand when you left me, which has caused some trouble & labour has debilitated me still more. The agent to make the necessary enquiry and arrangements with the incorporated banks of the state has been appointed & has received his intructions. They are now satisfactory. The first draft was a display in winding up, of the secretaries views that the change of deposits were not necessary from any view he had taken of the subject, and unless some emergency arose to justify the removal of them he would not sanction such a measure &c &c. This brought from me a frank note, & an explanation, and the thing stands now, that should the president & his council decide, that the secretary will carry that decision into effect, or withdraw. We can now have no further difficulty upon this subject. I have no doubt but the ^State^ Banks will eagerly come into such measures as will secure all the facilities the government may desire as to its fiscal ^operations;^ <illegible> but I have my doubts whether a majority of my Cabinet will coincide with me in this measure. I wish your frank advice, whether I should at once order the change, or come to the arrangement to make the change on the first of January ^this being the opinion of my Cabinet^ and communicate to Congress the arrangiment, or in other words, make it known thro the public journals that on that day the deposits was ordered to be made in the State Banks. I want your ideas fully on this point, as I am aware that there will be a diversity of opinion in the cabinet, & perhaps a majority against me for removing the deposits before the meeting of Congress. That they ought to have been removed the moment the Bank postponed the payment of the 3 pr cts, I had no doubt, and that the ought now to be removed, you know, I have as little doubt, still as my health is feeble, & life uncertain, and the administration of the Government on my death may ^must^ devolve on you, I would not wish to do an act of such importance, without having your full views upon this important subject. Mr Kendall will set out tomorrow or next day on this agency, and before his return, I shall expect your v[i]ews on this subject ^fully^ hypothecated upon the basis that the State Banks are substatial in capital, and will give every facility that the U.S. Bank now affords, and will <even> give us better terms than <illegible> it.

Our mutual friend Genl John Coffee is no more. He departed this life on the 7.th & was buried on the 8.th instant with the honors of war. The vast concourse of people who attended his funeral shew how firmly he was fixed in the affections of his fellow citizens. A better or braver man never existed, and I mourn his loss with the feelings of David for his son Jonathan. It is useless to mourn, he is gone the way of all the earth, & I will soon follow him. Peace to his manes.

I enclose you a copy of the Land bill. I had not time to have copied the reasons prepared to present to congress for witholding my assent to it. This I will get the Major to copy at the rip Raps and forward you from there. My family enjoy health & all unite in kind wishes for your continued health & happiness. 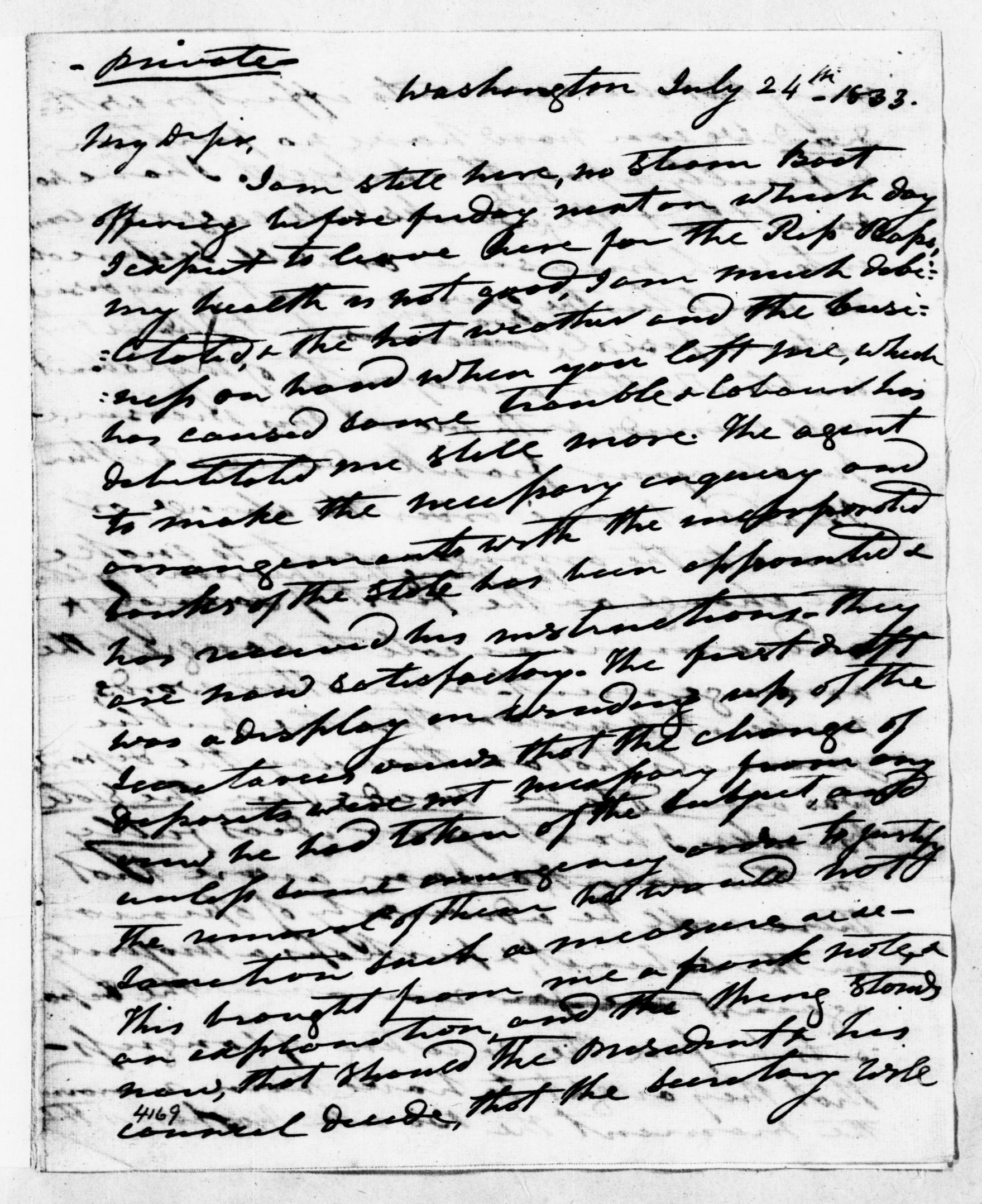 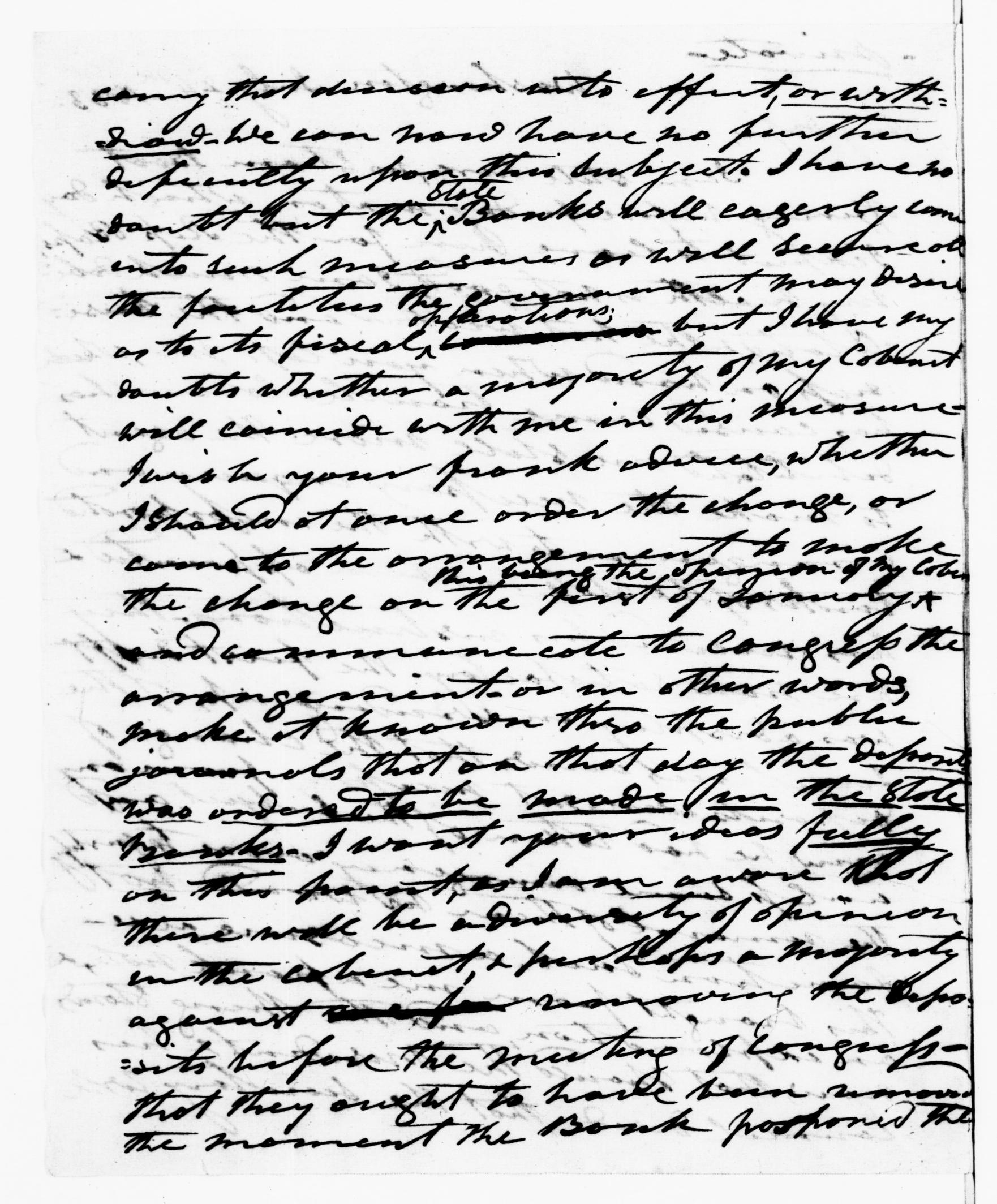 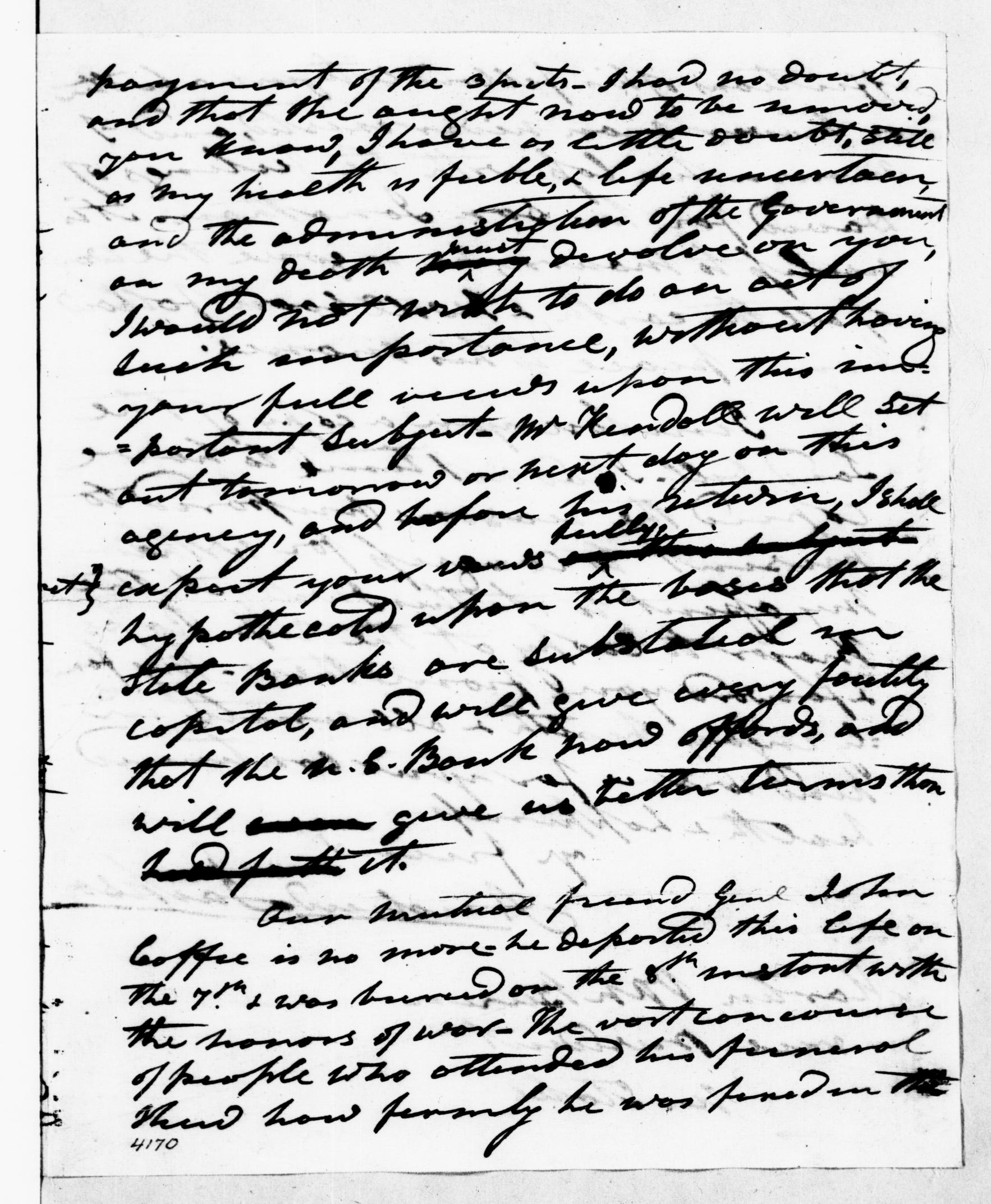 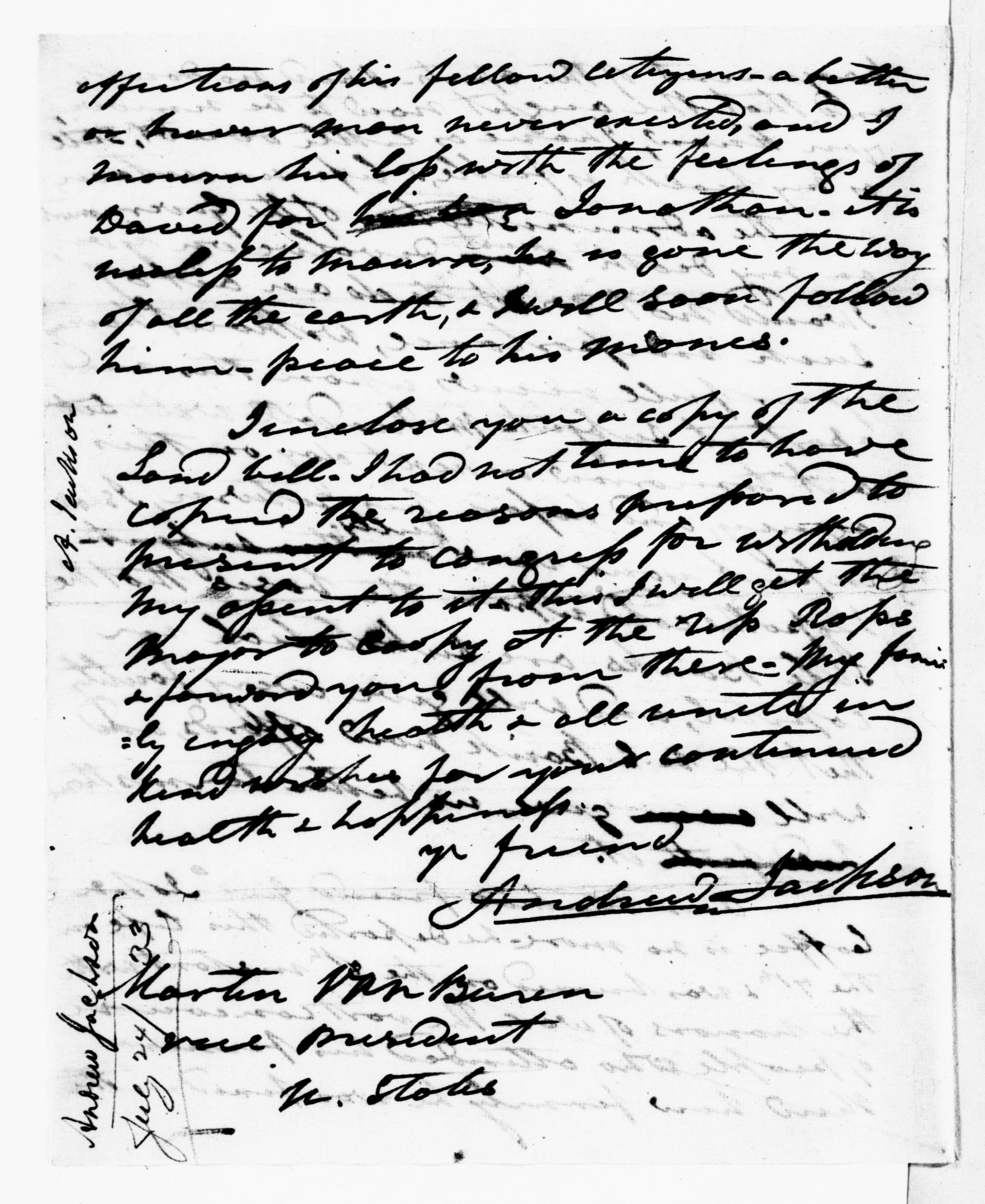 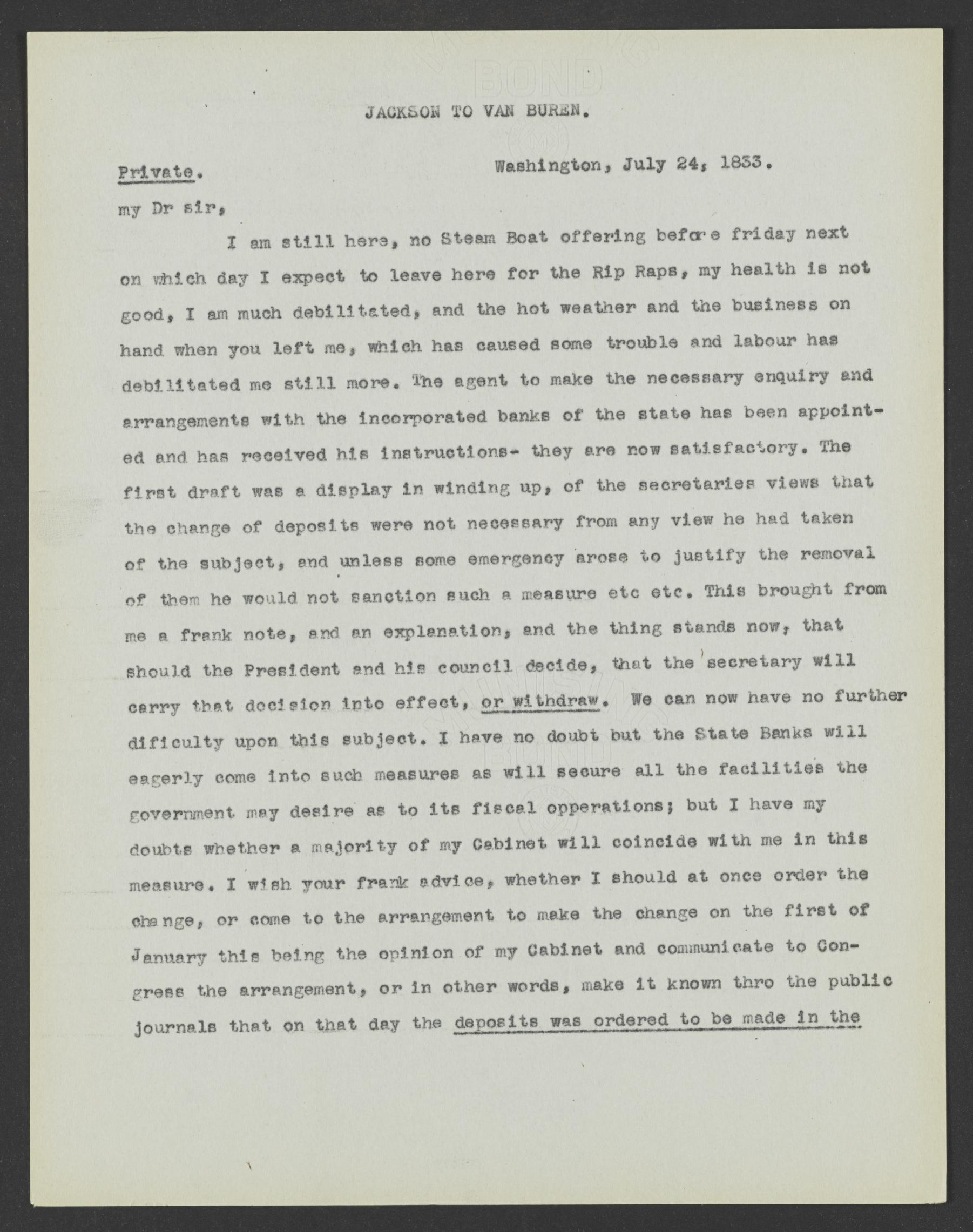 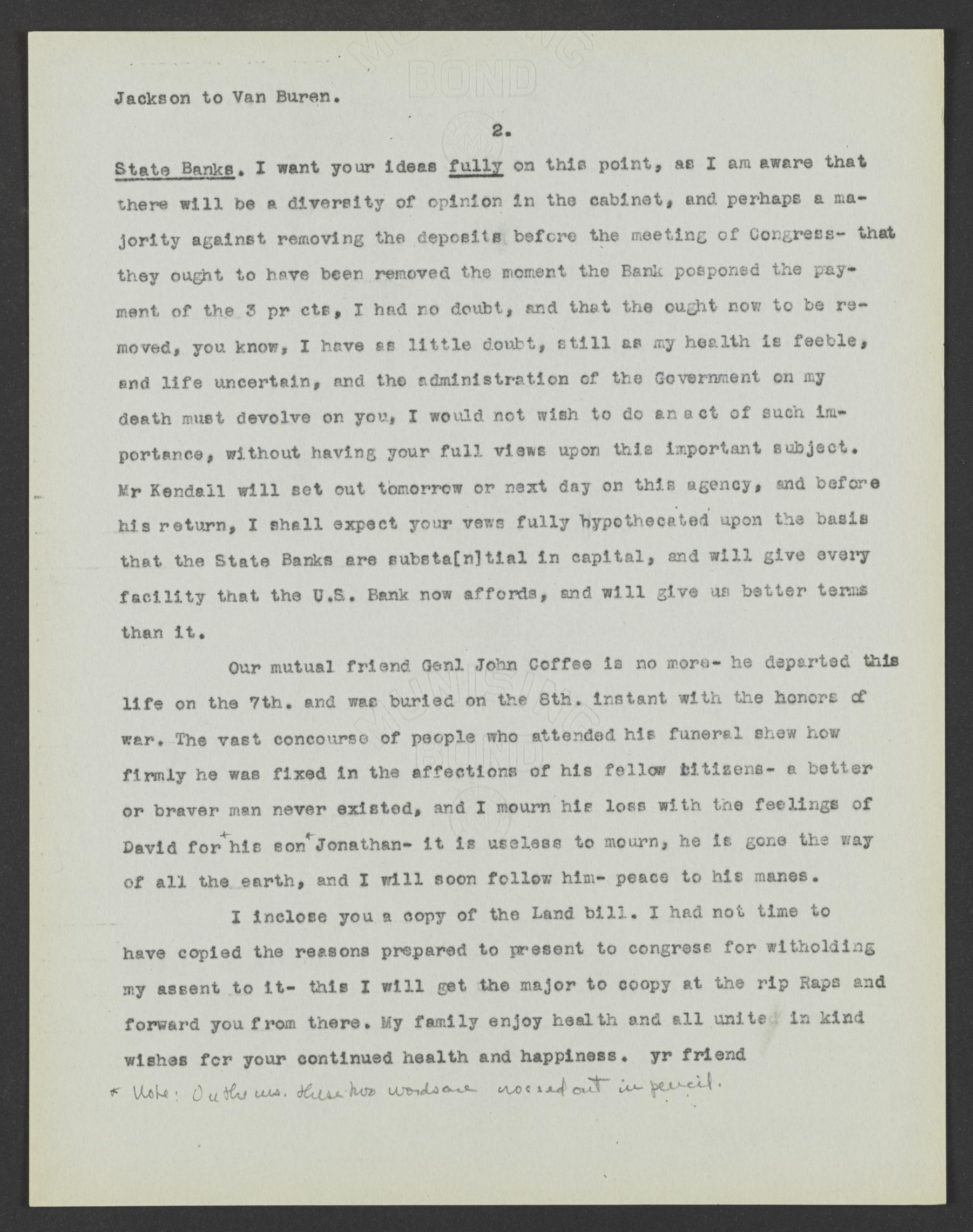