Although I have had but the honor of a Short acquaintance with you, and that for a moment only in company with Mr Toland of Phila. in May last, I take the liberty of addressing you directly and Confidentially. Within a short time, I have, with those politically connected with me, caused to be carried into effect an object deemed by us, of importance to the party in this and the adjoining States. It is the re-organisation of the principal Newspaper establishment of this city—the late National, now the Cincinnati Republican

Heretofore although the proprietor residint of Washington was and now is of the fast principles of the party, yet the other owner resident at this place and conducting the paper, has been under influences incompatible with the true interests of the people, and from the causes, inadequate to the situation in which he found himself placed, after the absence of his more independant and talented partner.

The present Editors and owners are young Gentlemen of talent, ambition, and untiring industry, they are well, and extensively connected with the people, in different parts of the state, and have an unlimited devotion to the cause. They view in you the future head that Shall sustain the principles which they Support. They are your fast political friends, and Join me in the expression of the opinion that it would be advantageous to the Democratic Party that you should, during the ensuing Autumn visit the west. Unless it be decided upon to have a Convention during the ensuing fall or winter, In which Case, it is believed, from our knowledge of the feelings of the People, and their peculiar views upon subjects of this kind, that it would be advisable that your visit be postponed until after that event. When you do favour the Valley of the Mississippi with a visit it would be well to bear in mind that we in Ohio are but on its entrance. A visit as far south as Nashville, and as far west as St Louis, will be indispensible to give a personal knowledge of its peculiar wants, its vast resources, and its growing power.

It has been thought here, that from the early efforts of Judge M. in the west, that it might be politic that there should be a nomination at an earlier period than would otherwise have been wished, in order that the party should know its head, and enable it to hold fast those who are the firm friends of the present Administration. In a short time, probably within a year the present and the past will be blended; That which is, will become History, and the People will be looking to the future.

A very few only of your most influential friends here (Among whom is Judge Burke), are acquainted with the recent movement in regard to this paper. In order to its still more extensive circulation throughout the West, It will require that patronage to which it is so much entitled; And with us, in this vast extent of country, it is of the greatest importance to a paper to receive as much of the patronage of a popular Administration as possible The character and standing of a paper is exalted among the People to a tenfold degree, to any benefits that may result of a mere pecuniary nature. It will also be important to illumine the depths of our first Settlements to the west of <illegible> with the lights of the Cause. In Carrying into effect the views which have been embraced, no exertion will be spared to promote the Cause of the People. We have every reason to belive that <illegible> will be given to Indiana & Illinois although we are aware of the activity of Judge M.

You will perceive by the Republican that the Democratic party in Ohio are from principle, decidedly opposed to the re-charter of the Bank of the United States. So are the people of most of the western and southwestern states. Yet there are many who with Cause believe that a National Bank is of great importance to this vast region. And if hereafter a plan for a new National Bank, possessing true democratic principles—prohibited from re-Charter at its Creation—can be devised as a substitute for the present Bank, The People of the Valley of the Mississippi will be in favour of it, provided they think it can be founded on principles known to the Constitution.

The outline of a plan embracing these principles, will appear in the Republican in a short time, without however for the present attatching to it any other importance than as a feeling, and as an object to retain friends and bring in others, who hold that a National Bank is of the last importance to the prosperity of the west; and who would hail with applause a new Bank that shall belong to the people in their sovereign and individual Capacities, in lieu of the present political machine.

On becoming acquainted with the people of the West, understanding their trade, intercourse, and Circumstances, you will at one glance see the vast difference that exists in regard to this subject, between them, and the residents of states east of the Mountains. Along the line of the Sea Board exists a succession of Cities, possessing an abundance of Bank Capital, and all within 48 hours Travel. Whilst with us, occupying 20 degrees of longitude and 25 degrees of latitude, literally without Bank Capital and with few Cities of sufficient wealth to <Own> one and requiring in a months travel a currency convertible at points 2000 miles distant from each other, it is evident that no state Bank Can afford the necessary facilities, at least no local Bank. The People see this, and the 100 Thousand Citizens who annually take the produce of their farms to market, and well informed in regard to all that Conerns their own interests

I have been much among the people of Ohio Indiana Kentucky Illinois & Missouri. They (who were supporters of the President) told me on the publication of the veto Message, That “Genl Jackson would give them another Bank” “founded on the interests of the people” and “owned by Americans” They rejoiced that the “British Bank” with its over weening “Aristocracy” was annihilated.

I have suggested to James Allen Esqr the leading Editor of the Republican, with whom only I am in Close Confidence, the propriety of ascertaining from you, such Views as you may have in regard to an annuciation at an early day of Your name as the Candidate to be supported by the party and by the people. It appears desirable that the party in this part of the west shall be rallied under a name as early a day as good policy will permit, and in such a manner as you may think best. Mr Allen has been a Member of our Legislature from Stark, and also edited a paper in his County, with ability; he has been a fast political friend of the President, since 1824. His discretion I can confide in.

Since my return home, I have accepted of the office of <Cashr> of the Commercial Bank, and ostensibly, am not much engaged in political matters, although I find the position convenient to my political wishes. 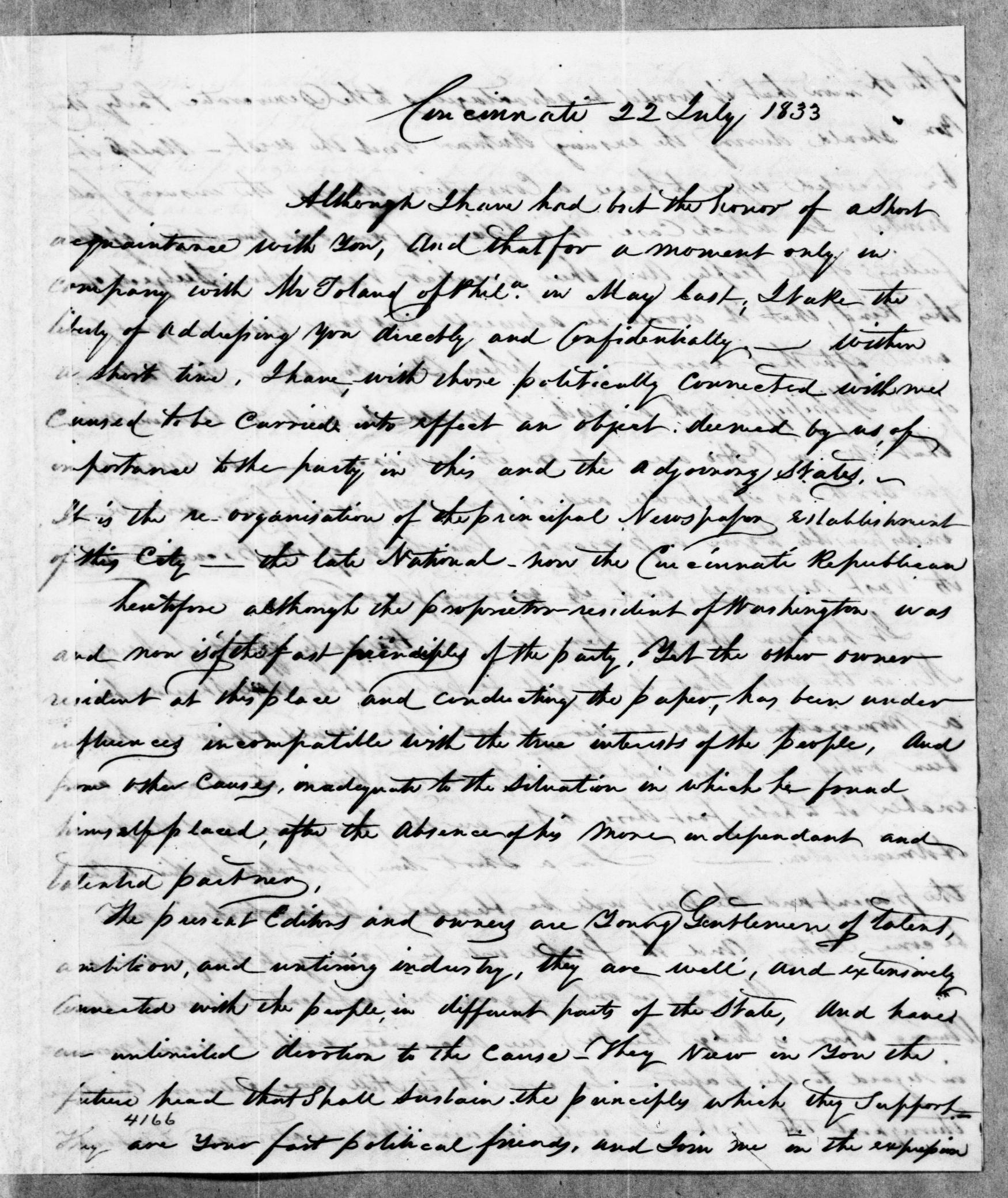 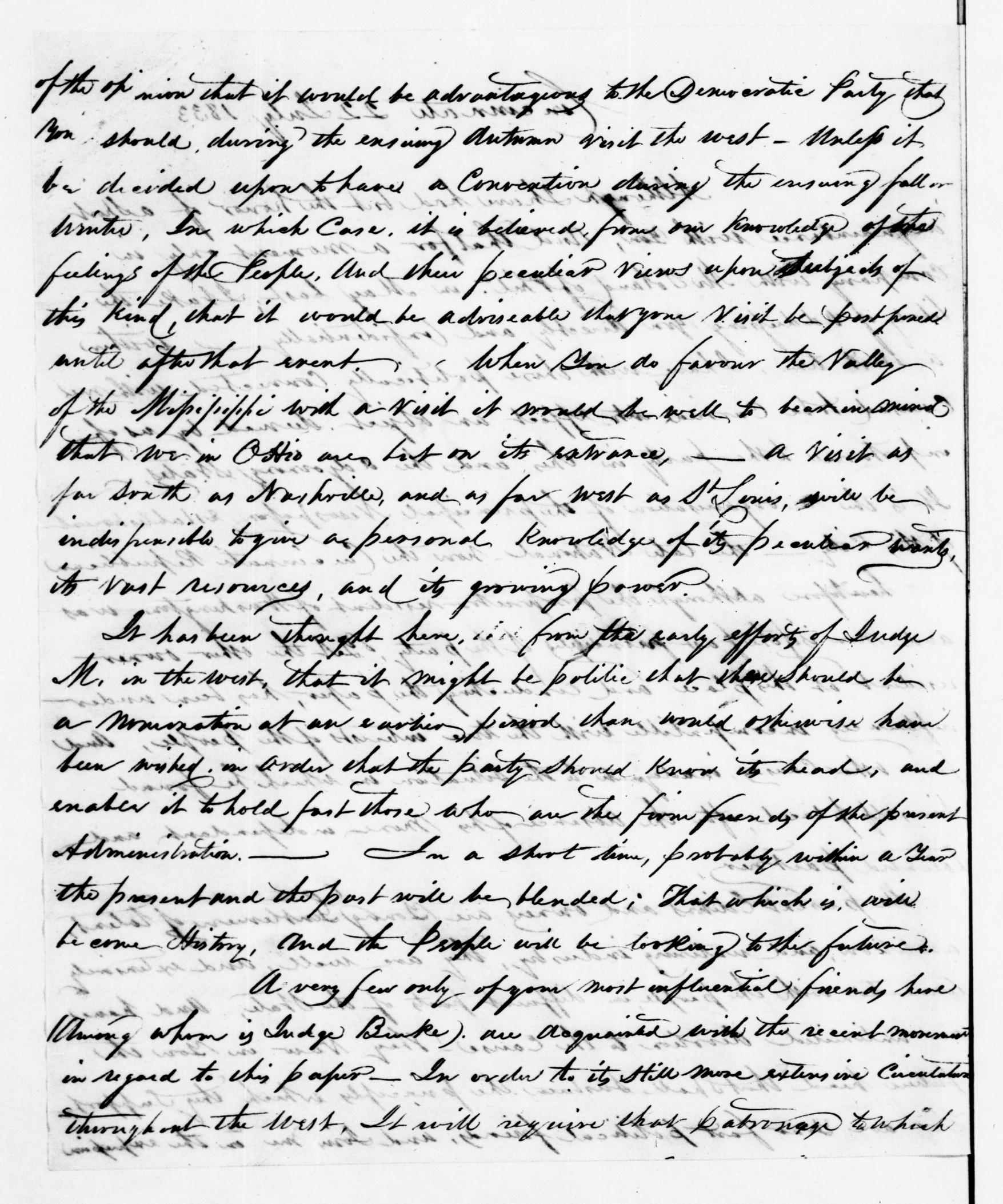 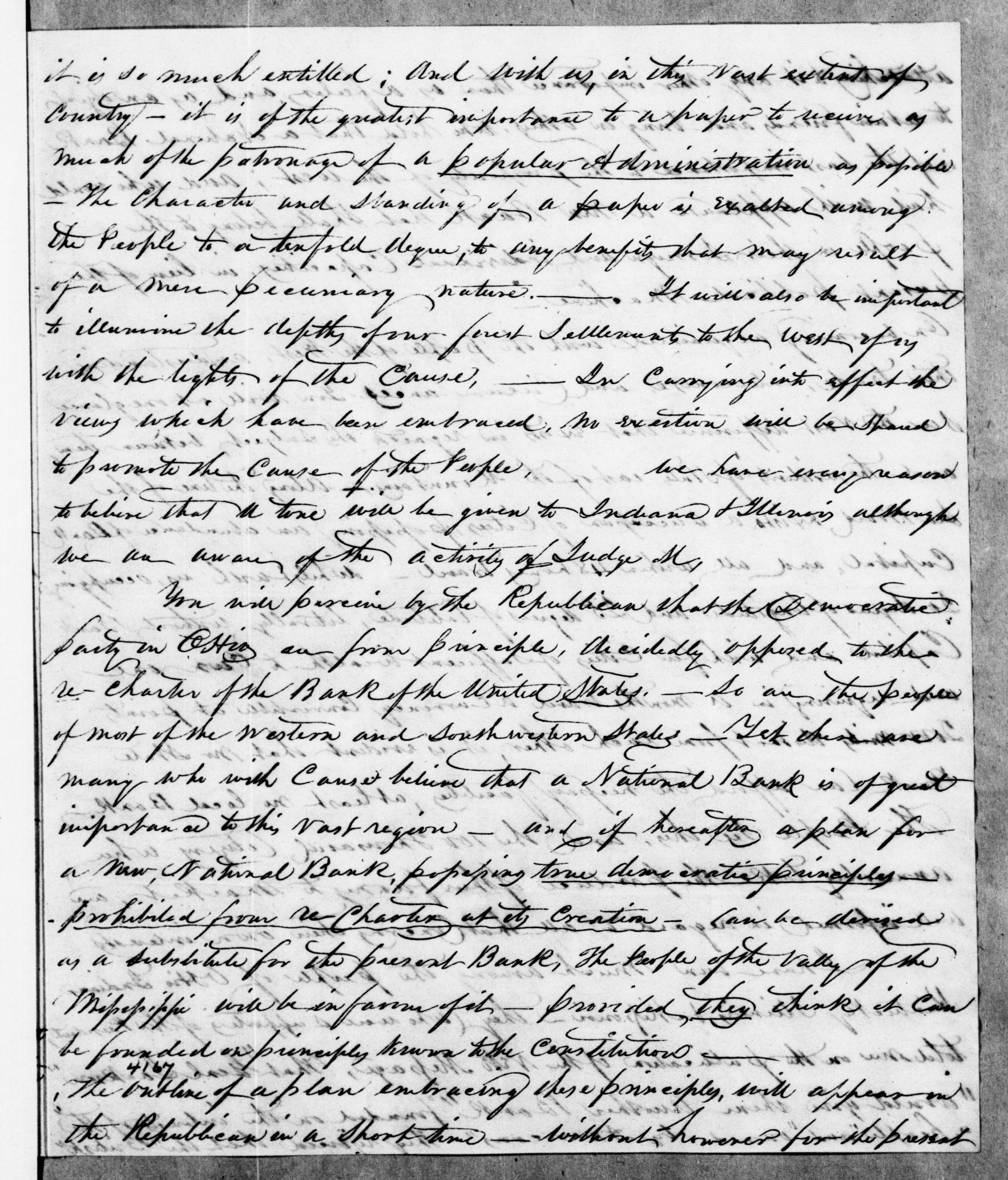 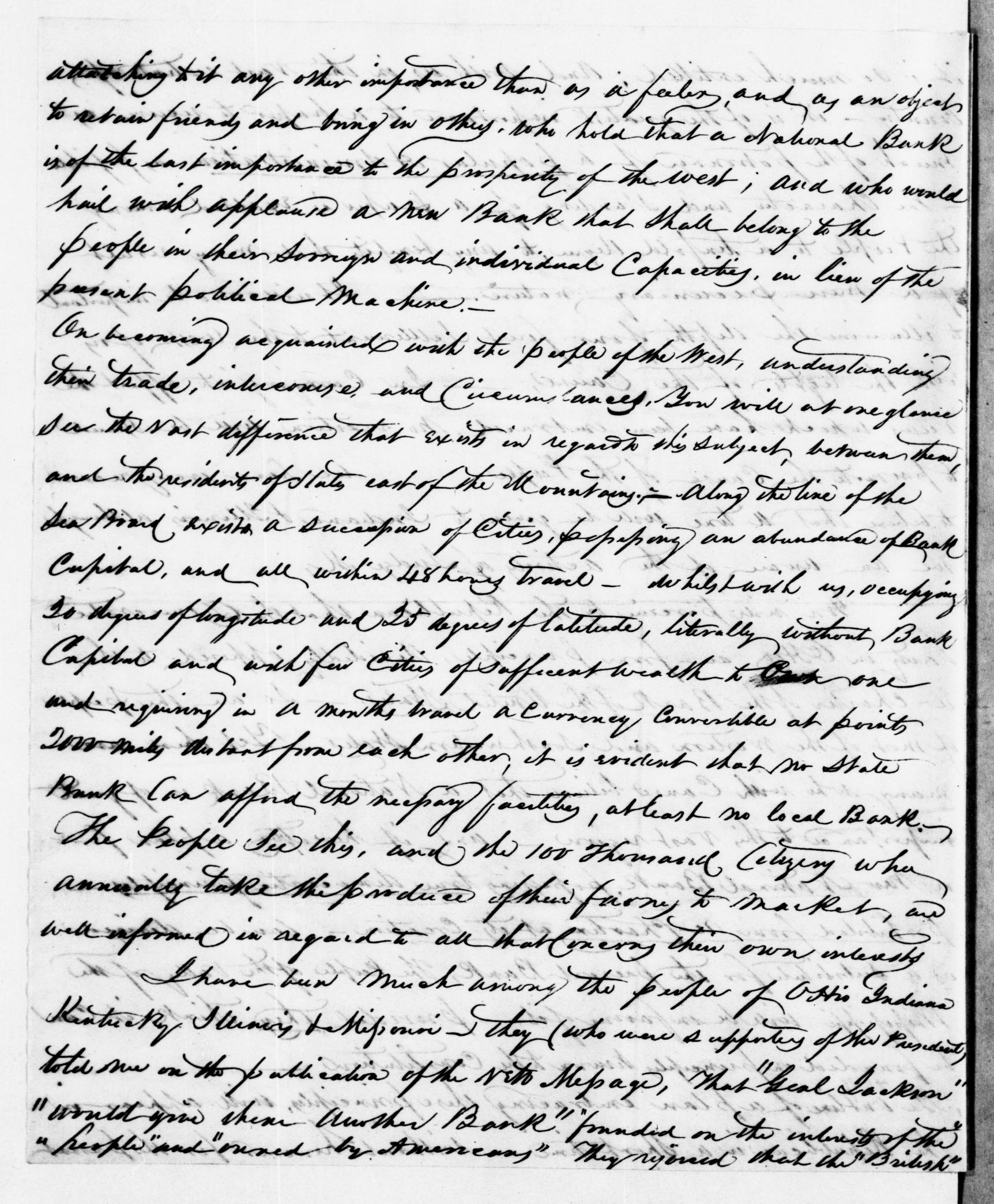 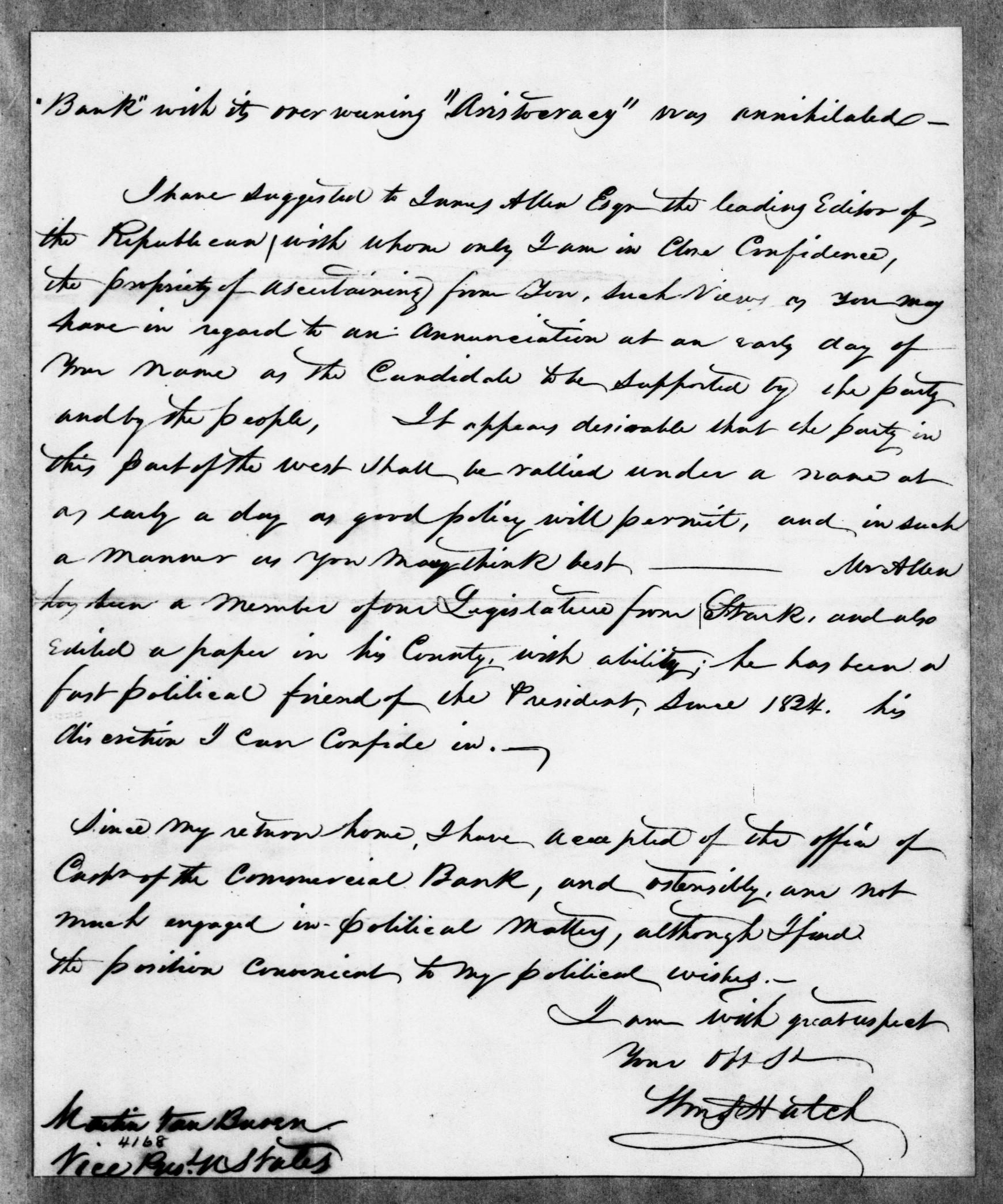 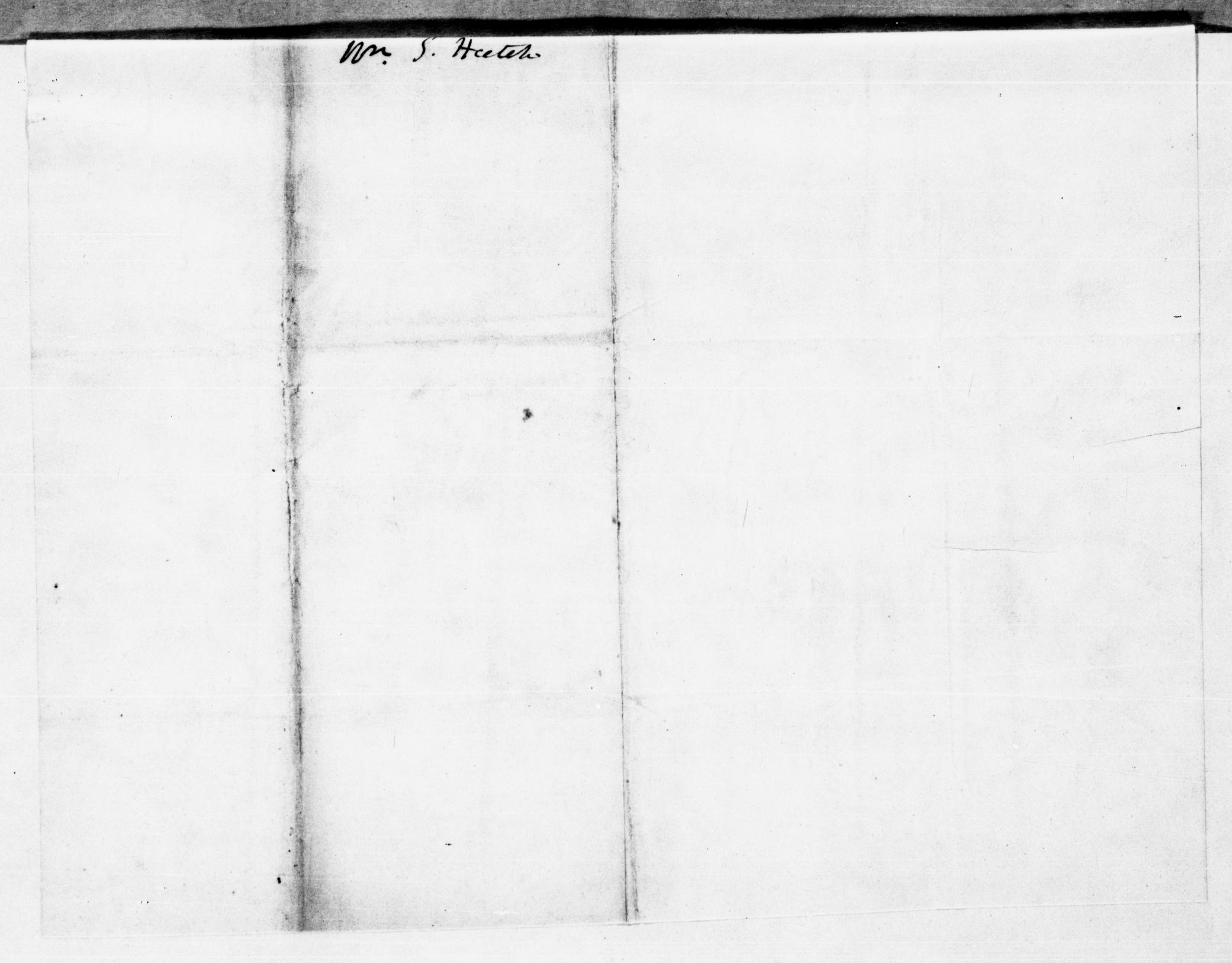